Frans Assez was as much a fixture in Belgian cycling as cobblestones and bergs. Frans passed away early this week after suffering a heart attack, but not without leaving lasting impressions on the cycling world. Gregg Germer, who rode under Frans’ directeurship on the Flanders team, and Edmond Hood both knew, and remember Frans…

I can still remember sitting in a budget hotel at De Panne in 2004 with my buddy Ivan and Frans, doing the interview for the piece below (see bottom of paghe); he told us about his riders, his team and how he still looked after himself – no pils, no frites and just the odd glass of red wine, which was good for his heart.

I last saw him at Het Volk this year, just back from Bulgaria where his Flanders team clothing was made, no need to waste euros on fancy Italian kit for Frans.

We popped into the Flanders shop when we were over for Liege-Bastogne-Liege last month; Frans’ brother, Luc told us that the great man was in hospital for a heart by-pass. We were a bit shocked but then imagined him joking with the young nurses and reckoned it wouldn’t be long until we saw him again and got the news about his latest deal – it wasn’t to be.

Today I woke up to a bit of sad news, my team director from the last two seasons Frans Assez died from a heart attack. The word came from one of my friends who still works with the Flanders team and the news caught everyone by surprise. Frans, a former professional cyclist of 8 years, ran for many of the past years a professional team under some form of name Flanders, the bike brand he sold and distributed. Flanders was my first pro team and Frans was the man who gave me that opportunity, one which has changed the way my path of life has gone.

Describing Frans in a few paragraphs would be only begin to delve into how enigmatic a man he truly was and would do him little credit. The great thing about Frans was nothing ever seemed to really bother him. A lot of team directors talk about the stress of the races and being behind the wheel of a car in a race. Frans, on the other hand, was just the opposite. As care free as a teenager and just as lively.

If I were to make a montage of the people I’ve met throughout my life, the 5 second clip of Frans would see him behind the wheel of the Flanders team car, leaning back with a smile on his face, left hand on the wheel with the pinky pointed out while he whistles a tune. The Italians have a word, ‘tranquillo’ a certain care free way of taking on life, not sweating the big stuff. That is the way I will remember Frans.

Oh, and one more way – ‘Ehh Manneke’ the greeting which I will always and forever associate with Frans. I don’t think there was one meeting after we first met where I didn’t hear those two careful words of greeting. So tonight I will raise a nice Trappist, let out a little ‘Eh Mannekke’ and drink to a departed friend.

There is a condolence registry for Frans online here:deWielersite.net

The funeral ceremony will take place on Saturday 6 May 2006 at 11 o’clock in
St-Walburgakerk at Oudenaarde. Rouwbetuiging after the service in the church. PEZ Profiles: Frans Assez – August 24, 2005
Future stars climbing the ladders to ProTour success are accompanied by dozens of colleagues clinging to the lower rungs with their fingernails. Most of them would never make it without team directors like Frans Assez, who’s 30 years in pro cycling have earned him a savvy reputation in the bunch – and also among ladies of a certain age…

Bolstering the glitter and glam of Jan and Lance and the other ProTour heroes, the teams battling in the UCI’s Divisions 2 and 3 complete the enormous jigsaw puzzle of international pro cycling. Each future star climbing the ladder to Div. 1 success is accompanied by dozens of colleagues clinging to the lower rungs with their fingernails. And the whole scrappy operation is held together by team directors like Frans Assez, whose 30 years in pro cycling have earned him a certain savvy reputation within the bunch – and also among ladies of a certain age, British scribe Edmond Hood observes: 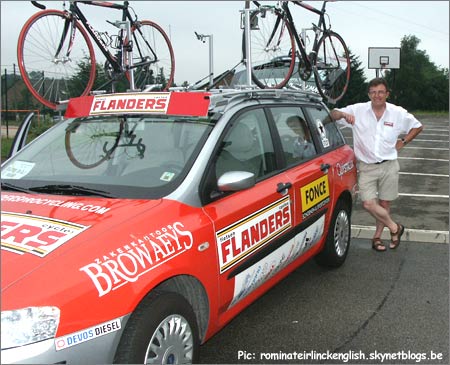 Jack the Lad
Exhibit A: Irish professional Stephen Gallagher, out on a training run, stopped to buy a can of Coke in some tiny village in Flanders.
An old lady, dog in tow, appeared.
‘You are professional?’
‘Yes,’ says young Gallagher.
‘What team?’
‘Flanders.’
‘Ah! The team of Mr. Assez!’ And, as Gallagher recalls, the old girl beamed with a dreamy satisfaction either remembered or imagined.

Exhibit B: It’s the 2004 edition of the 3-days of De Panne. Assez is holding court outside the team hotel on the town square, directing the mechanics while I stand by, watching him chat up two middle-aged ladies out walking their dogs.

He says his goodbyes and we go inside – where he immediately strikes up conversation with another two ladies, also of a certain age (though note this pair, giving the lie to a curious developing pattern, are sans canines).

Earning his stripes in the disco era
Assez was a pro himself in the seventies. Back then, before UCI divisions, minimum wages and bank guarantees, a pro contract was a little easier to come by. Many riders received only a bike, shorts and jersey, plus what they could win in prize money. In a world where the average career lasted two years, Assez kept on for eight seasons, riding for Mic-de Gribaldy, Flandria, Carlos and Fangio.

Since then Assez has been involved in sponsoring teams for 20 years.

‘When I raced as a pro, I also had my bike shop in Oudenaarde. For eight years I did both things: training and working in my shop. When I stopped racing I began to get involved in management and sponsorship.’

As well as the shop, Assez is involved with his family’s bicycle business. He says they sell 24,000 Flanders bikes per year.

The bikes have served as launching pads for more than a few trips to Div. 1. Former Flanders stalwart Staf Scheirlinckx moved on to a good contract with Cofidis (his brother Bert is still with Flanders and is their strongest rider). Former Ghent-Wevelgem winner Geert van Bondt is another who served an apprenticeship with Assez. And last year’s winner at Kemzeke, Christoph Roodhooft, was a Flanders man early in his career, before moving to Mr. Bookmaker.

Pretty persuasion
Thanks to 30 years in the sport, Assez’s contacts stretch across Europe. So while Assez’s budget is not huge, he supplies up and coming riders with good bikes, mechanics, and soigneurs. Most importantly, he is able to use his connections – and, one suspects, a bit of charming arm twisting – to put his riders on a schedule not far removed from Div. 1; Flanders garners invites to good quality races from Portugal to Poland and all points between.

Evidence: In 2004, Assez’s team was the only Div. 3 organization in the bunch at Kuurne-Brussel-Kuurne and the 3 Days of De Panne.

The salesman in Assez is never far away, and he does have a tendency to pluck figures from the air. I ask how many British riders he has brought through. ‘About 30,’ he tells me but can name only three – Ibbotsen, Lodge and Tonge – apart from current squad members Gallagher and Lloyd.

And whom does he respect in the bunch? ‘I respect my guys, a small team out there riding 235 kilometres in De Panne at 45 kph, Lloyd was up there today, trying hard.’

The team’s dinner is about to be served so our chat is drawing to a close, but I dare ask about a sore subject: the team’s demotion from Div. 2 to Div. 3. Assez, forgetting the time, launches into a long monologue, the gist of which involves controversial ex-Flanders professional Vincent Calli and various large amounts of Euros. To illustrate, he uses my pen to fill the back of the day’s race results with unintelligible figures.

Assez says he had wanted to bring the team up into Div. 1 until the Calli episode and a major run-in with UCI supremo Hein Verbruggen. Suffice to say Frans and Hein do not exchange Christmas cards; during the 2004 season Assez said he was so disillusioned with the UCI that he would end his team sponsorship. 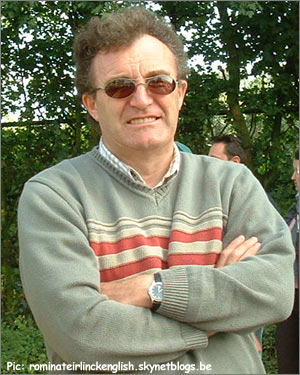 But Flemish bike racing without Frans Assez would be like frites without mayonnaise. The fact is this year Assez again directs a stellar team that includes Scottish rider Alex Coutts. And Assez has once more been able to engender the sighs and exclamations among a certain generation of lady dog-walkers across the continent.