My Year with GCN+

Nearly twenty years ago in the USA we met up with a videographer who wanted to launch a cycling channel, which we thought was a brilliant idea. There was a Golf Channel, and a Cooking Channel and, for all one can recall, maybe an Aquarium Fish Channel but nothing devoted to The Best Sport in the World. We shot two videos together—one was a “Why I Ride” kind of thing, the other at a custom bike show—but in the end nothing happened. However, in the modern world we have YouTube and the Global Cycling Network (GCN), offering high-quality professionally-made videos, covering all aspects of cycling, from new tech to epic rides. In January 2021 GCN+, a subscription streaming service, was launched and after this first year it is worthwhile to review what GCN hath wrought. 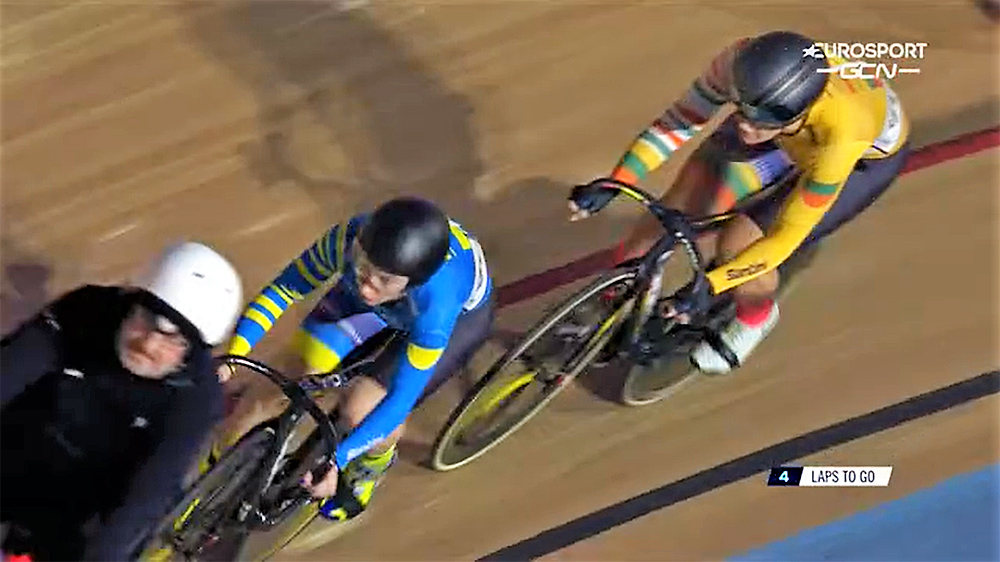 In 2020 there was “GCN Race Pass,” which was essentially live races using the Eurosport feed but GCN+ is much more than this. First of all, the races: in 2021 there were a whole lot of them. While living in Germany I had access to Eurosport so was able to see many races but living in North America that luxury is not really available so it was with the feeling of a desert wanderer, dying of thirst, stumbling onto an oasis that one discovered the race offerings on the streaming service. And then drowning in it, pretty much. That is because, as GCN presenter Dan Lloyd claimed, in 2021 GCN+ offered more than 500 live events. 500! 500!

But let’s back up a bit. This number appears to include each stage of a stage race (or around 63 for the Grand Tours rather than counting them as just three events). Furthermore, there are geographic restrictions for a number of broadcasts (especially if you live in New Zealand, it seems) so while the Giro d’Italia was shown live and complete, there was no access to some other big races—the Tour, the Vuelta, the Men’s Paris-Roubaix and the Tour of Flanders if you were in Canada.

But, still, there was enough racing to make your head explode and/or make your Significant Other pack up and leave if you were stuck to the screen to watch everything. And even counting stage races as single events the list of what Canadians could watch came to 214 races. You just need to go to that pirate Russian website for those missing races (well, maybe don’t).

“214 races” means that, geographic restrictions aside, you can watch races you might only have heard of but never had a chance to see, such as the Tro Bro Leon in France. Watching the Tour of the Basque Country makes one realize just how brutally hard that race really is. Of course, in 2021, or “Covid Just Continues,” we still saw a lot of impressive competition.

The opportunity to see the “lesser” races gives insight into the effort needed to be a pro racer. In addition to the commentary by experts including Sean Kelly and Magnus Backstedt, one clear advantage over Eurosport is that there are no commercials.

This is a seriously full calendar and you can watch every obscure race you have never heard of but which in fact offer great viewing. Former pro Filippo Pozzato has now become a race organizer and his races, including a gravel one for pros, were launched in October 2021 in the Veneto region of Italy and were all available on GCN+, looking a lot nicer scenery-wise than the dreary UAE Tour that opens the season. 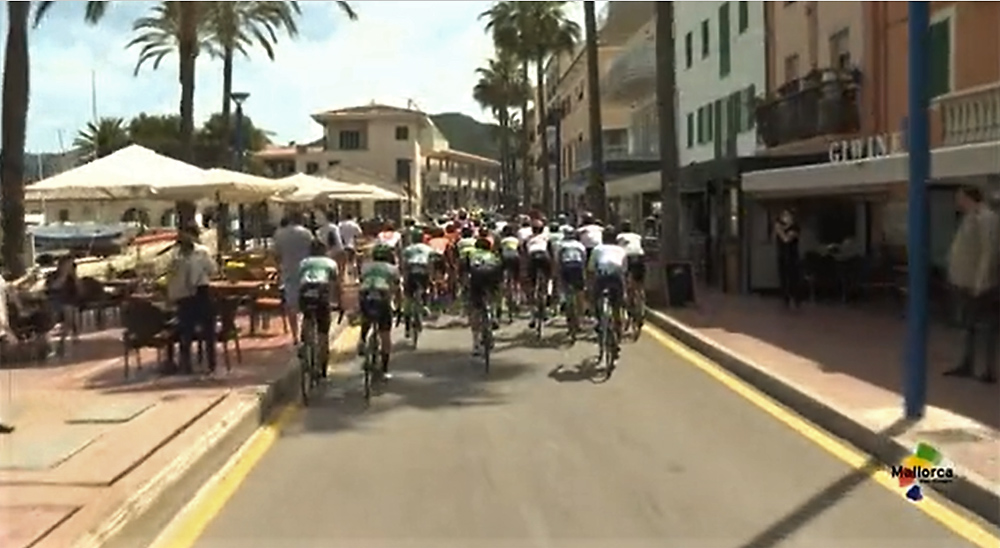 Looking over the races I was able to watch in 2021 the year started in January with six cyclocross races and the annual road opener, the GP Marseillaise. February brought a whole lot more as the road season began in earnest and it was necessary to be more selective to have a life outside of watching races.

Happily, GCN+ offers video-on-demand for almost all of the featured races so it is possible to see them at your leisure. This meant I could drink Belgian beer and eat frites in the afternoon instead of at breakfast when watching cross races.

Along with cyclocross and road racing, GCN+ offered an impressive buffet of track events as well. Particularly enjoyable was the new-format experimental UCI Track Champions League. This is an attempt to make track racing a bit more accessible, with plenty of sudden-death heats and modern media. Rather than taking a few days, such as is normal in traditional track events, each of the Champions League races was done and dusted in four hours and it looked like the participants were having a lot of fun. It is a series where men and women get equal prize money. This is not the case in road racing but at least GCN+ offers as much as there is out there for women’s racing.

Unfortunately, the decision by the organizers to broadcast only the last hour of the inaugural Women’s Paris-Roubaix meant that we saw Lizzie Deignan riding alone to the finish for most of it. A deserved win, yes, but it would have been nice to get as much as is on offer with the men’s version. Hopefully ASO will do something about this next year. 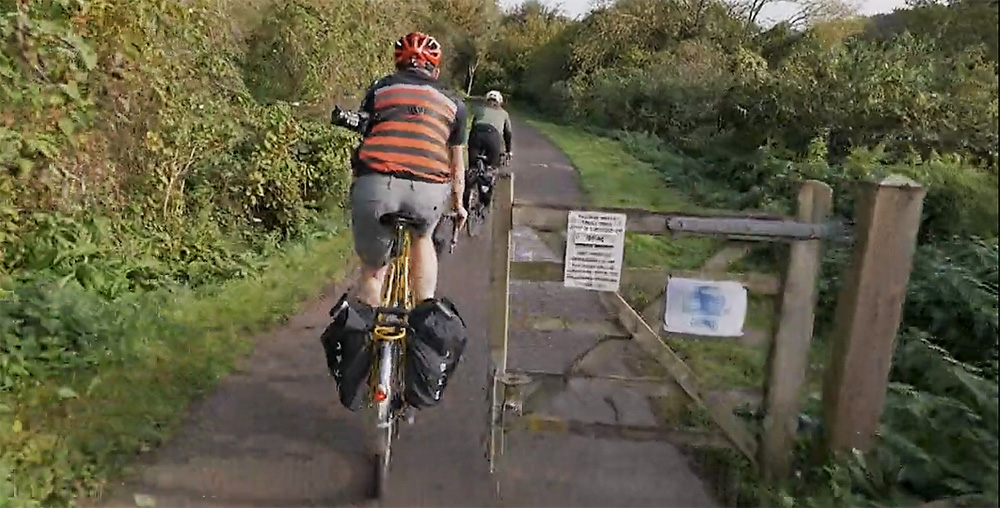 Sick of racing? In that unlikely event, GCN+ has an enormous amount of other original material to enjoy. It has produced a series of documentary videos which fall into the categories of: Adventure; Challenge; Science and Technology; Culture; History and Legends; GCN Shows; and GCN training videos.

“Challenge” videos include record-setting rides or at least attempts, such as matching Merckx’s One Hour Record with modern tech and training, or the fastest Land’s End to John-O-Groats relay ride. Many of these challenges are pretty hard, such as the insane Norseman triathlon.

“Science and Technology” is one of the best sections for lovers of the machinery and has offerings not only about the latest, such as 3D printing in metal, but also the story behind fabled brands such as tubing manufacturers Columbus and Reynolds and Colnago. There is a series on the tech “gamechangers” of cycling, so far covering GPS and clipless pedals, and a series about framebuilders. 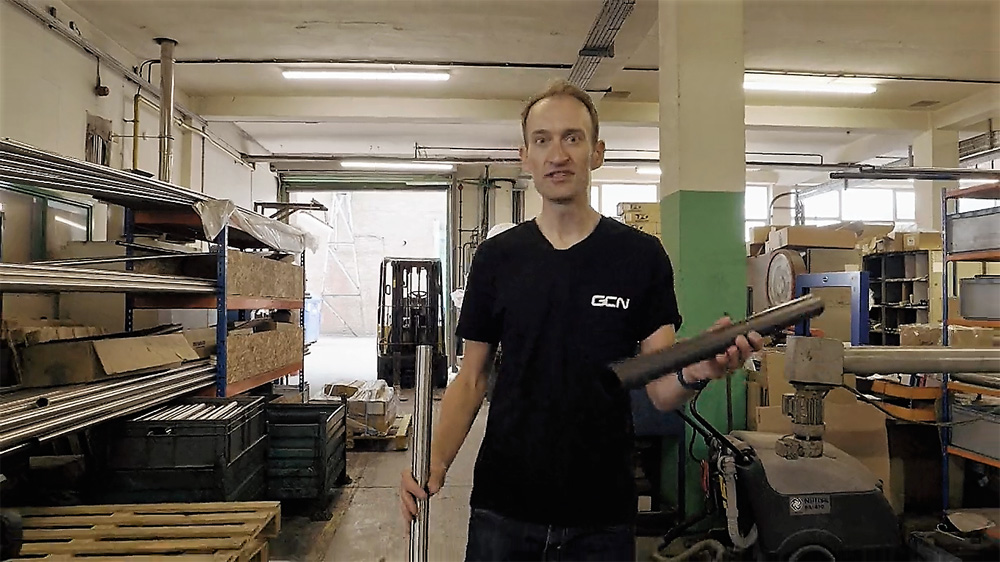 “Culture” offers up “Cycling Heartlands,” mainly in the UK so far but also covering Melbourne and Vermont. There are stories about interesting individuals who have had their lives changed through cycling, including a drunken Irish party girl who turned her life around to become an elite track racer, a profile of Britain’s most successful Paralympic cyclist, a rider who is more involved with cycling after becoming blind, and a rider who has dealt with the crippling effects of thalidomide. 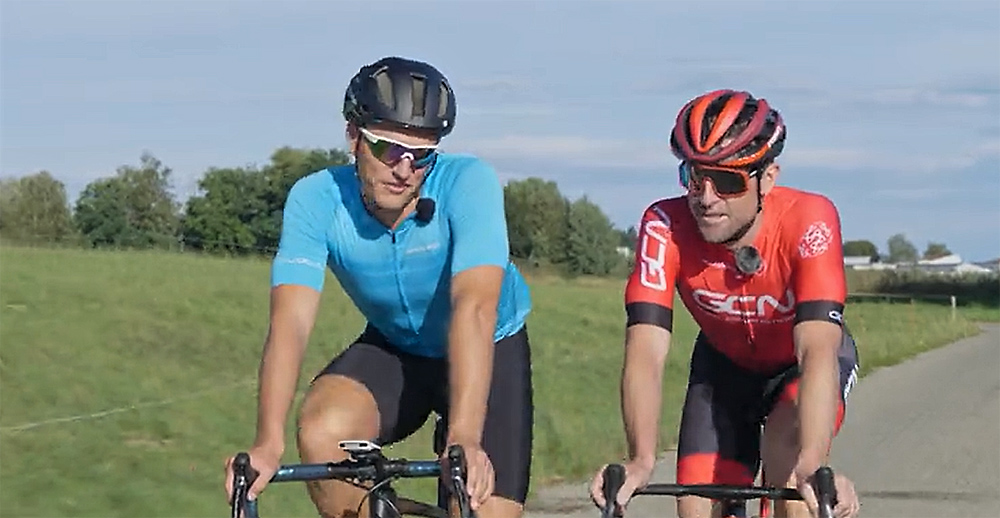 “History and Legends” not only has videos about cycling’s past but has an excellent series where Dan Lloyd or Bernie Eisel visit retired pros to see what they are doing now. These are very enjoyable, particularly when the subject is asked to change a flat tire as fast as possible and even when retired the ex-racers are still very competitive. These are really fun and one has the feeling it would be great to just ride with them yourself—well, maybe not with Andrea Tafi, who at 55 clearly still wants to win every ride and will make you pick olives. 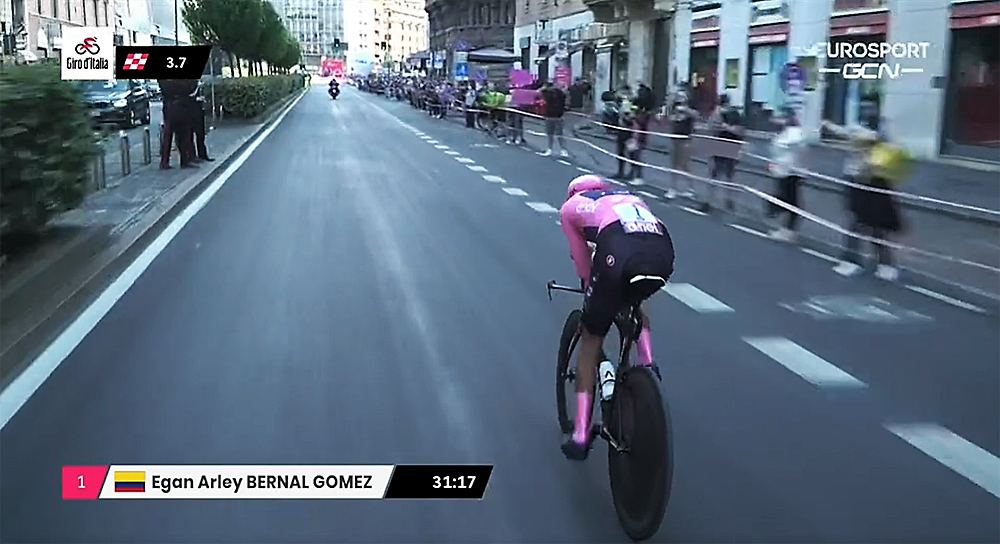 Most of these “GCN+ Originals” are around an hour in length and are impressively filmed, making excellent use of drones (compliments to the crew here). GCN personalities, familiar from the GCN YouTube channel, feature in many of them and there is a quirky Britishness to many of the programs (and a lot of rain), consistent with that GCN style. And although I have watched almost all of the GCN+ documentaries there is so much on offer and so much being added it is hard to keep up. 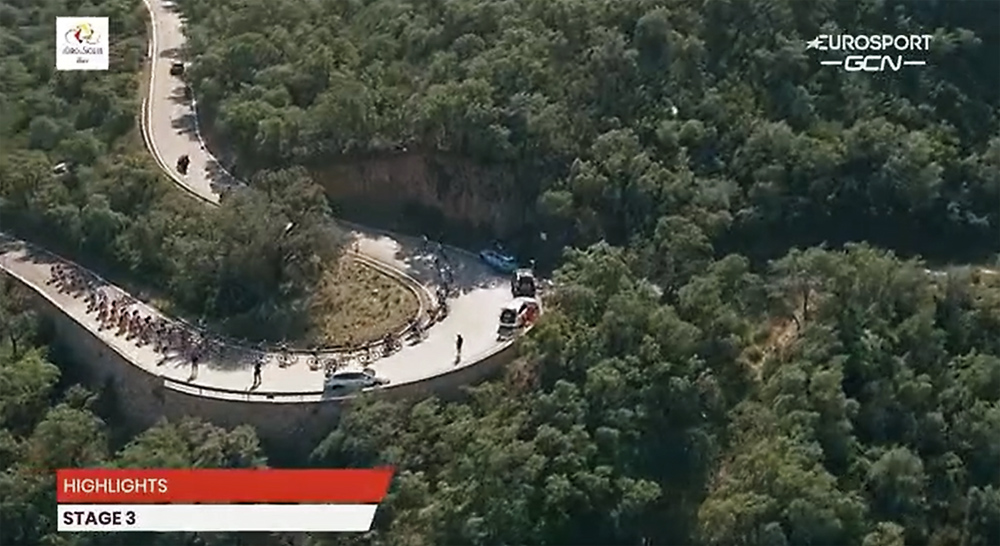 GCN+ was offered at a reduced price in 2021 but the standard price seems like a bargain for what is being offered here. For Canadian subscribers the price is $11.99/month but given that the calendar is so full for the entire year it makes much more sense to go with the $59.99 annual fee. 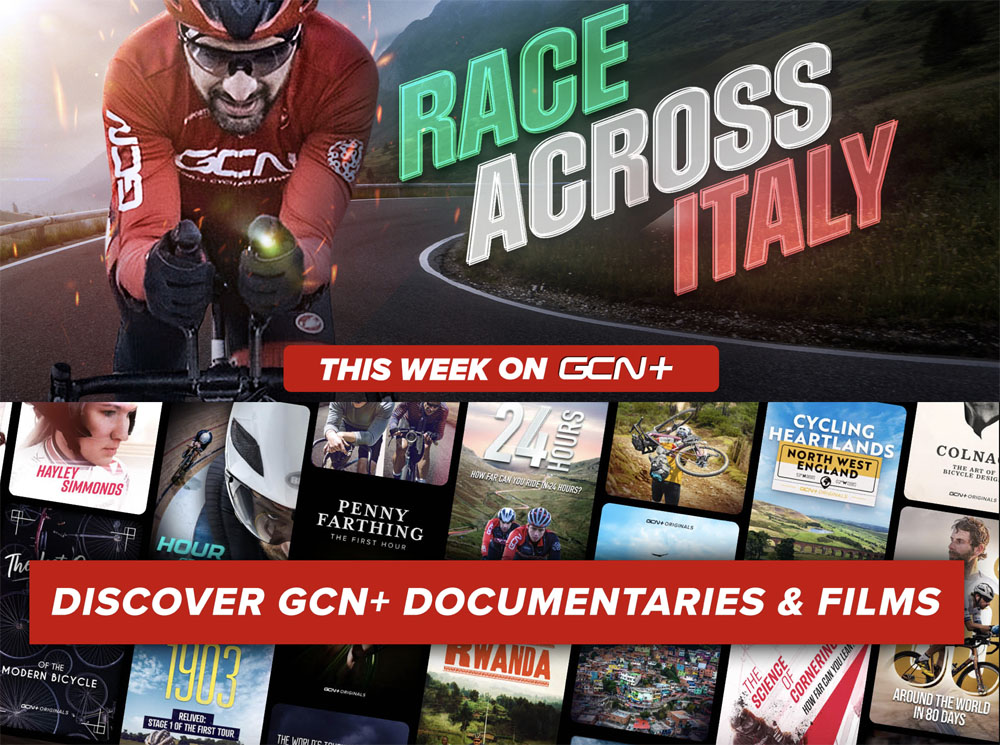 I am watching the service via a Windows laptop but given that GCN is a subsidiary of The Discovery Channel there should be no issue with connecting. Check it out here after acquiring a suitably comfy chair because you are not going to leave it for months.

Amazing Moments in Cycling that Fans Will Never Forget