Adventure cycling; it does not always require huge time commitment, crossing bleak deserts or fending off hostile natives. The Global Cycling Network (GCN) has sent its presenters on interesting short trips in the British Isles, including several places that would not seem so well-suited to cycling but in the Age of the Gravel Bike everything seems possible. Like a weekend in Scotland’s Inner Hebrides.

GCN personalities Mark Beaumont (the fastest man to cycle around the world) and former pro racer James Lowsley-Williams join up for a quick tour of two places where you could probably not do a long tour: the islands of Jura and Islay. Jura, which boasts one pub, one whisky distillery, and a population of less than 200, also boasts a single paved road, covering the length of the island and, as 40.2 kms, is unsurprisingly named “The Long Road.” The island, which is roughly 11 kms by 48 kms, has a bleak beauty and is mainly bog where it is not mountainous. Author George Orwell noted its remoteness but was happy enough to get there to complete his novel “Nineteen Eighty-Four” in 1949, staying at a remote farmhouse. Once a stronghold of the MacDonald clan, there is a ruined fort that makes for a picturesque stop.

Mr. Orwell might have been happier to have been on Islay, which is not only directly accessible by ferry from the Scottish mainland but also boasts nine busy distilleries, with another inactive and an additional one about to open. After riding around Jura, the adventure cyclists return to Islay (pronounced “Isla”), for some gravel riding and whisky tasting.

Islay is one of the 35 inhabited Inner Hebrides islands and among the largest, having around 3,000 residents. The economy is based on agriculture, whisky and tourism (the last probably related pretty closely to the second). While mainly flat, it does offer some challenging riding, with a particularly good selection of gravel roads. Mark and James cruise around on muddy roads, past ancient stone walls and over charming bridges as they enjoy the island’s sights.

Of course, those sights include some distilleries and while Mark Beaumont says that cycling is good and whisky is good, cycling and whisky together are maybe not so good. The lads overcome this problem with a bottle of Islay Journey, which conveniently is a blend of five of the island’s products, thus avoiding the need to stop at all the distilleries. However, they do make a good fist of visits. At one of them, Bunnahabhain (founded in 1881), their guide explains why there are so many distilleries on the island. It is due to all the raw materials being locally available but also to the ease of shipping as every one of the distilleries is directly on the shore. In fact, there was no direct road access to Bunnahabhain for more than seventy years. The guide does not mention the barrels, which obviously have to be imported given the lack of trees in this part of the world. The other curious fact unmentioned is that only one of the distilleries appears to be locally-owned while all the others are controlled by huge multinationals with global distribution networks. Bunnahabhain, for example, is owned by a South African conglomerate, while Diageo, Suntory and LVMH have most of the others.

Continuing on their journey, the cyclists, who had been the subject of another GCN+ video about a tandem bike ride the length of Britain, try another form of tandem travel, this time by sea kayak, Islay looks ideal for this, and it is also nice that this form of boating also gives access to those distilleries from a different direction.

Unlike many of the bikepacking trips that have been celebrated on social media and involve camping in harsh environments in bad weather, this two day adventure ends in a luxury hotel on Islay, with some fine dining at hand. And, one hopes, more whisky.

While “Riding the Hebrides” is a nice way to see what the Inner Hebrides have to offer, one of the takeaways from the video is that you can have an adventure not so far from home. The program begins with James departing the metropolis of London by overnight train and within a day he has reached the tranquil world of Argyle and ferry for the Isles. Rather than being burdened by bags and equipment, Mark and James do some credit card touring, enjoying the beauty of the Inner Hebrides and with minimal discomfort over the two days. Even if you can’t get to Jura or Islay–well, at least you can get their whisky everywhere!–this half-hour video is nice inspiration to think about doing a two day trip not so far from home. 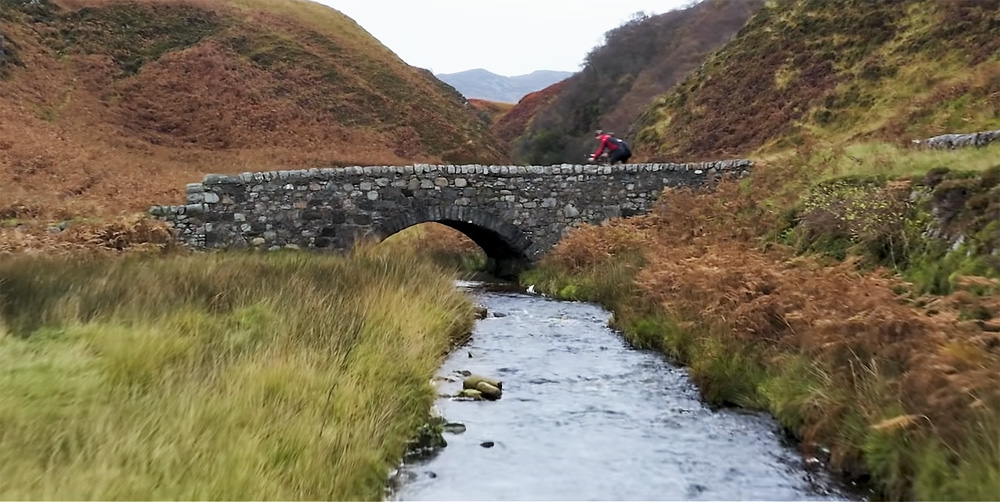