Gent 6 Day Weekend: Ed Hood is normally working hard bellow the track in the Gent Velodrome, but this year he is in Belgium as a spectator and a fan. For a full weekend of fun you have to take in the bars, the beers, the burgers as well as a cyclo-cross and the action on the boards. Ed takes up the story:

A man with a weak bladder could easily go bust in Gent at 50 cents per trip to the ‘little boys room’. 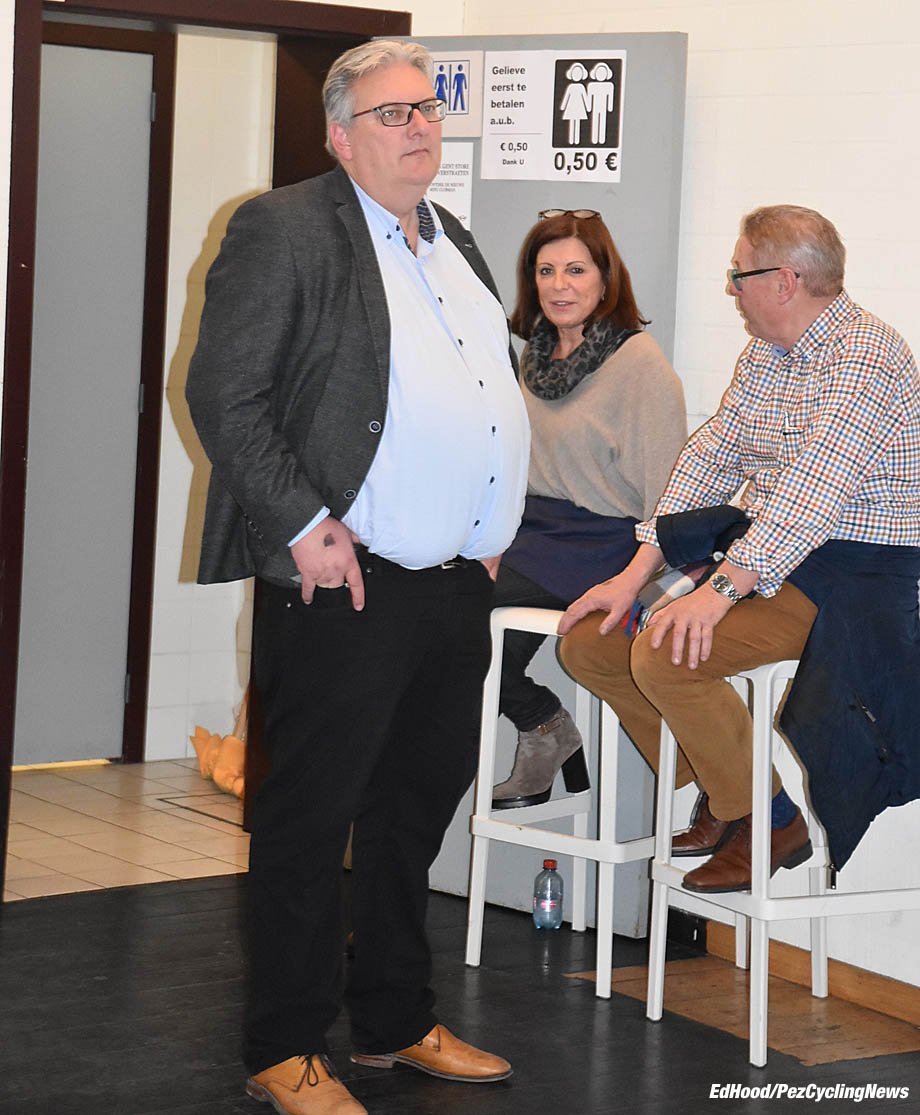 They must make fortunes from that alone, never mind the hundreds of gallons of pils which cause you to visit in the first place. That’s one of the many things that have changed in Gent – the toilets don’t smell nearly as bad as they used to.

Don’t buy into the nostalgia that little has changed in Gent: it has. Gentrification goes on apace with grubby old shops being converted into trendy barber’s shops, hipster cafes and cool delis. Gent was recently voted one of the 10 best city destinations in Europe by one of the big English newspapers. 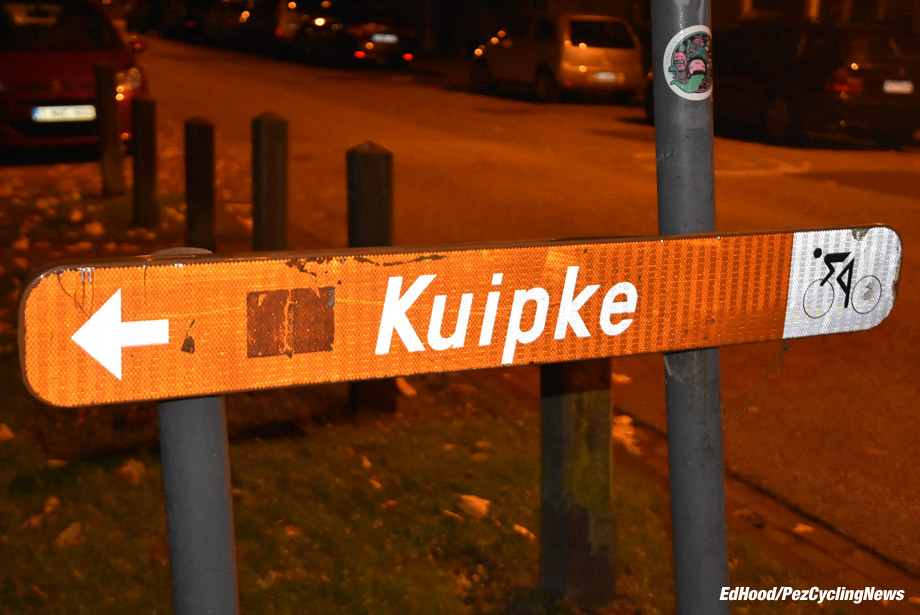 Up at The Kuipke things have changed too; the track is still 166 meters and not for the faint hearted, the pils still flows like a Scottish Highland river during the spring melt, the rider cabins are dire, and the Flemish fans still love those Dernys. But whilst the plumbing has improved, the racing has not. 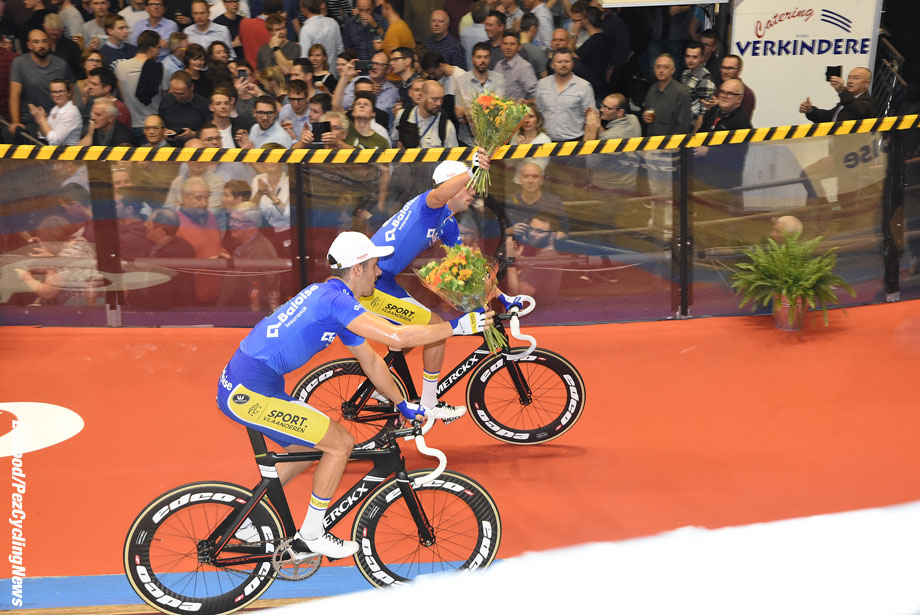 An hour later it was a TWO lap lead and 75 points – hardly a cliff hanger. 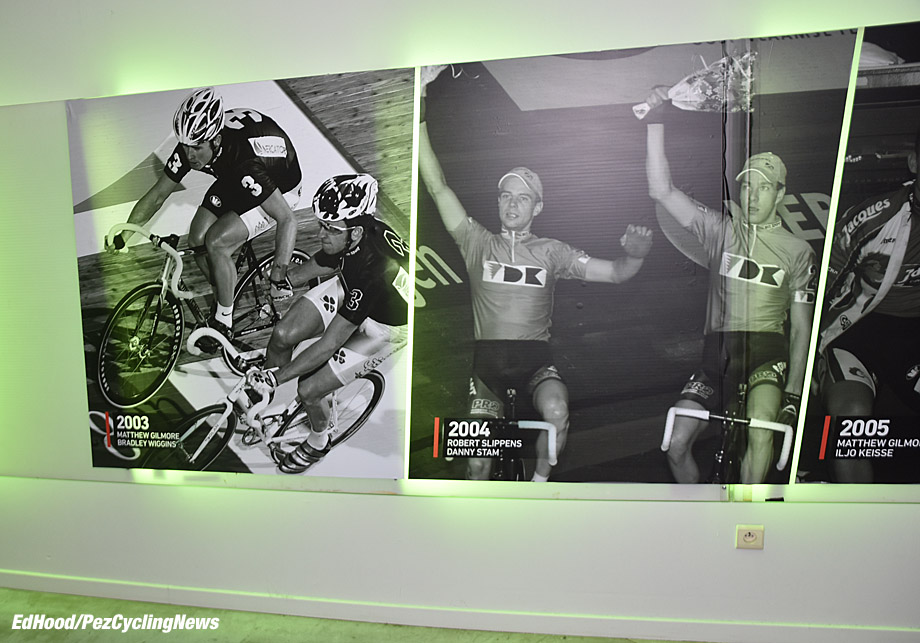 When Iljo Keisse won his first Gent six with Matt Gilmore; when cavalier Robert Slippens & Danny Stam swooped and swerved to top spot and when rainbow jerseyed Michael Mørkøv and Alex Rasmussen won, it was all on that last sprint. Theatre coming to a wonderful climax – not a damn procession. OK, that’s off my chest. . .

Friday: Ryanair, Edinburgh to Charleroi then pick up the hire car – but not before we raid the frituur at the airport. Gent, check in to the hotel and head for bar de Karper to collect our tickets from owner – and Iljo’s dad – Ronnie Keisse – but not before a pils or two at the Vivaldi (possibly the best bar in the world). Our seats were good ones, block C just past the finish line. 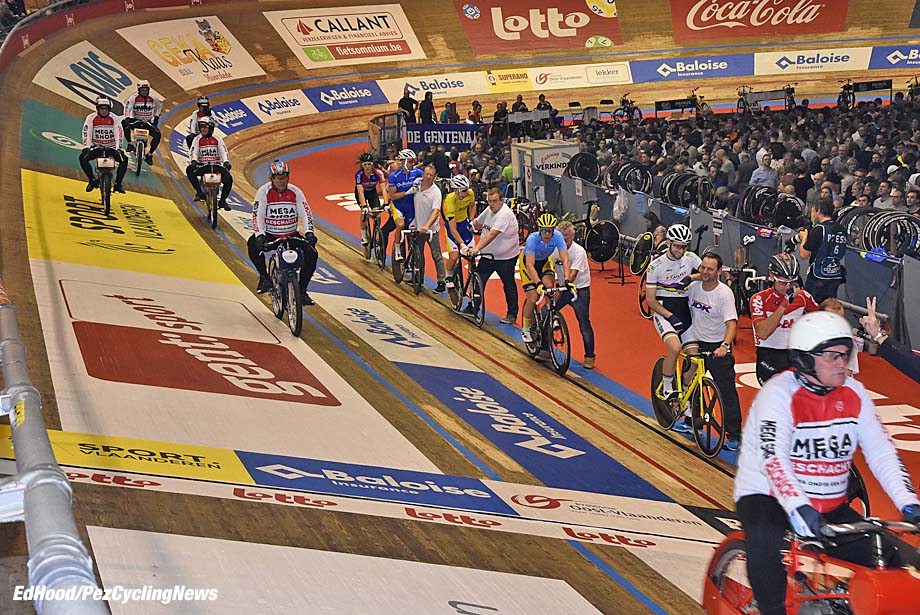 Kenny & Moreno won the devil, the time trial, the madison and the Derny – you may detect a pattern there. . . 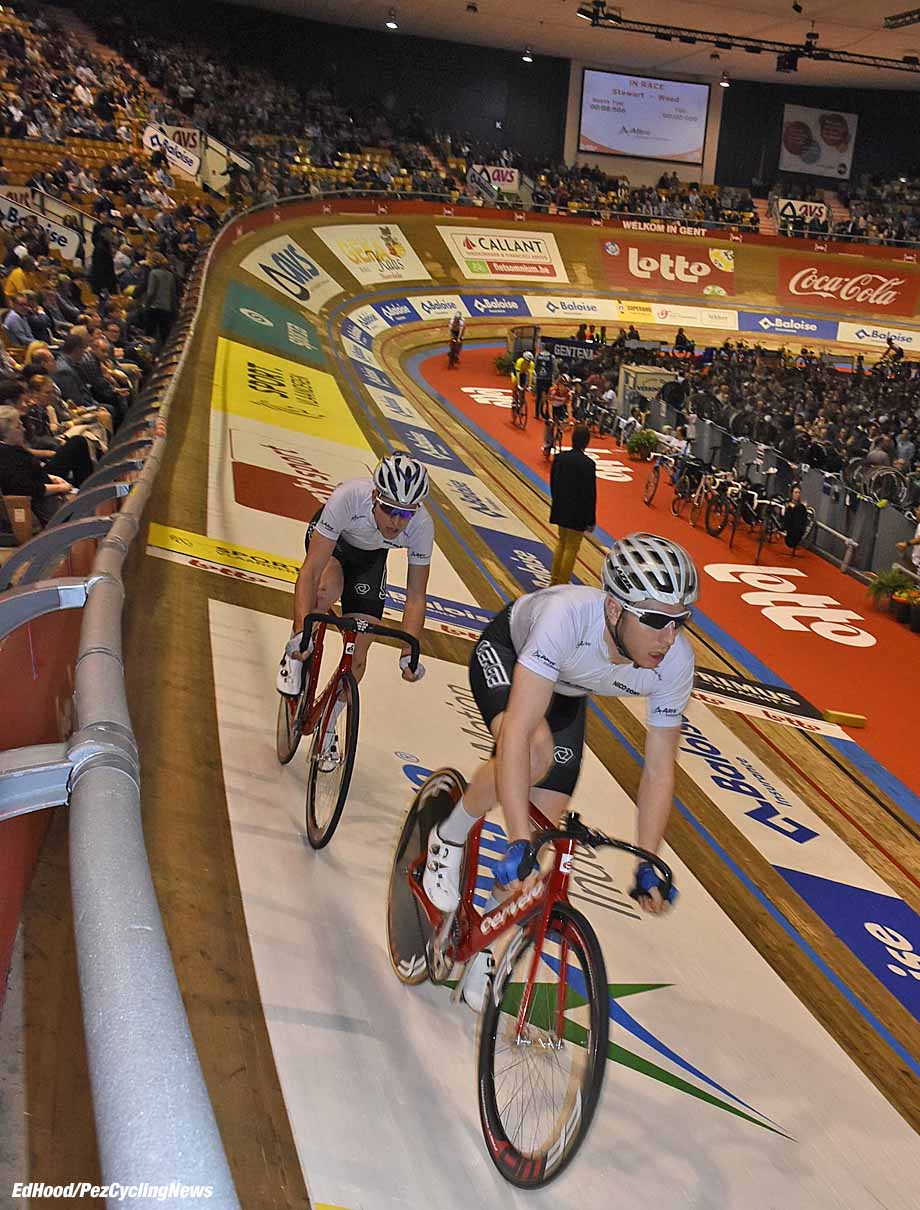 We took time to go down and see the Great Britain team: Ollie Wood who was fourth in the U23 World Road Race Championship in Bergen and European U23 omnium and individual pursuit champion, Scotsman Mark Stewart. 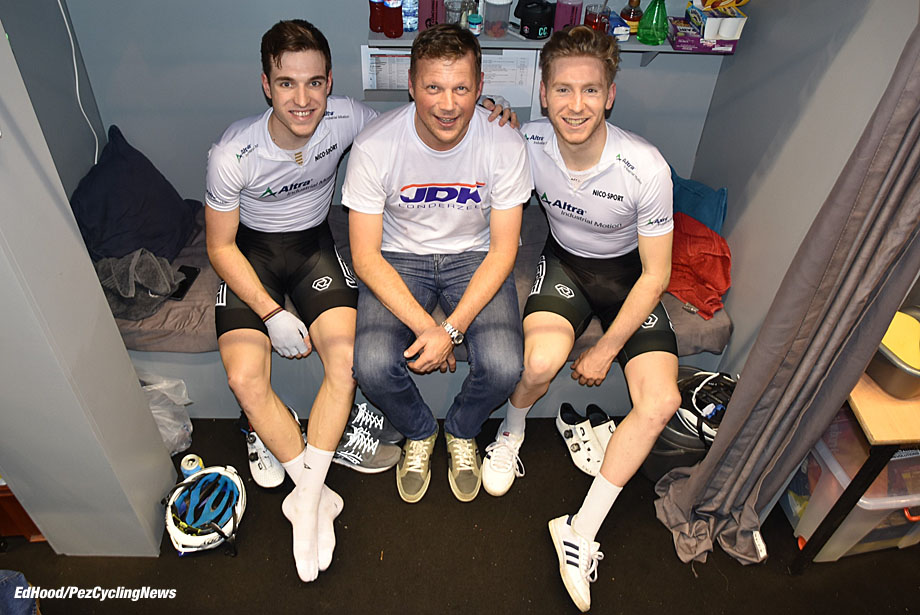 Ollie crashed on night two so perhaps wasn’t on his best game but both men were in good spirits, considering – along with Martyn Frank, their soigneur. And the bike of the race? 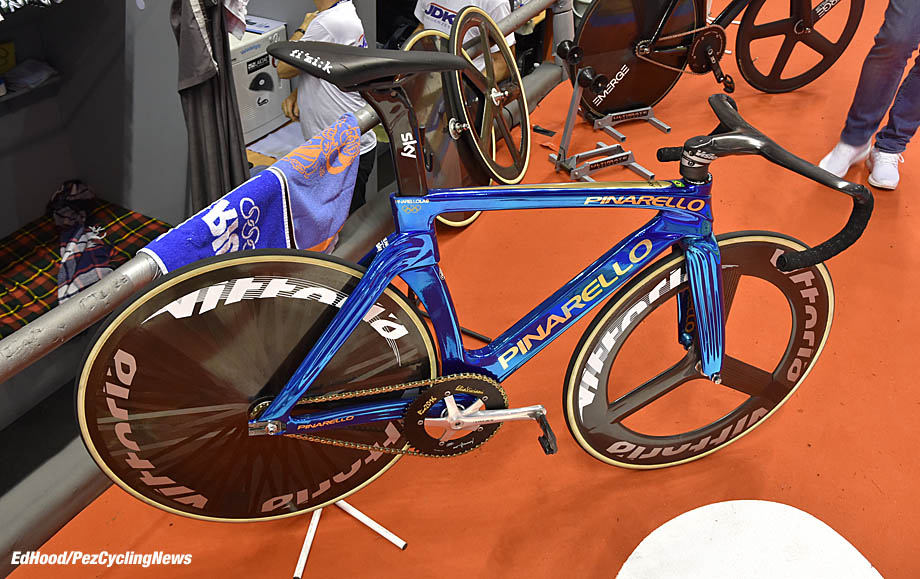 Elia Viviani’s metallic blue Pinarello Derny/TT machine, the gold bunch bike was just a tad too blingy for me. 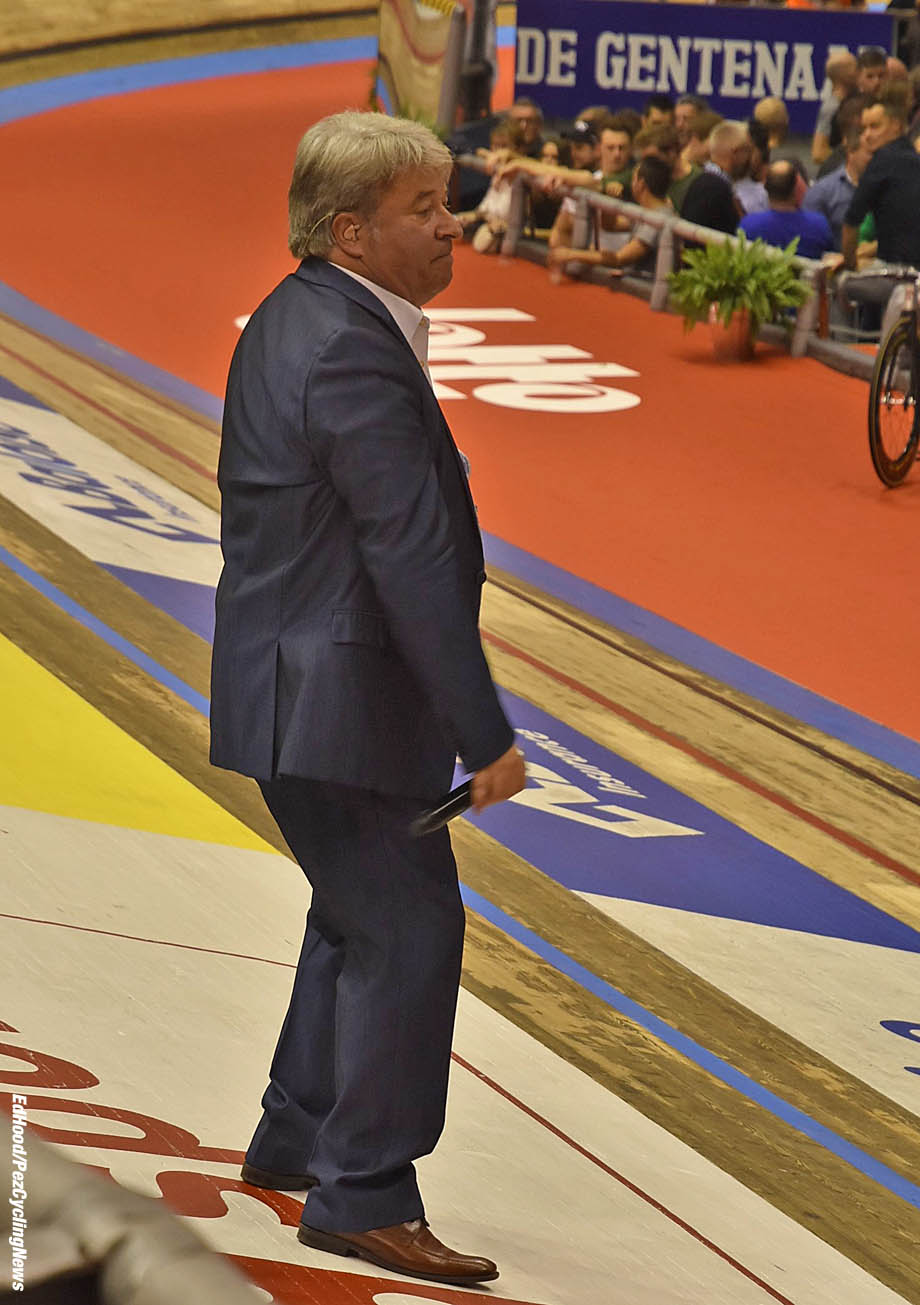 Gary Hagger was the entertainment for the evening, think bad pub singer allowed to wander freely around a cycle track with a radio mic. But butchered songs and Belgian domination on the boards – or is it gluttony? – apart, not a bad old night. 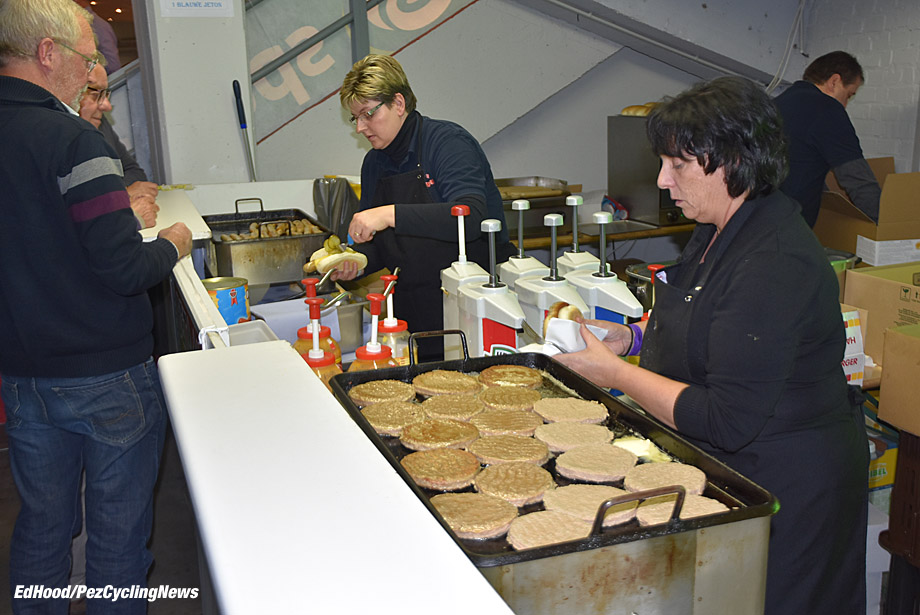 And damn! Those burgers hit the spot. The tunes in the Vivaldi were great – even the dig was getting down – the company was good and Maes pils was just perfect.

Saturday: The hangovers weren’t too bad and it wasn’t so far up to Uitbergen and the cyclo-cross. A few years back it used to be the Koksijde World Cup ‘cross in the sand – but there was a program reshuffle and the dunes are left in peace this weekend. Maybe for the best; Uitbergen was cool – grass roots, schoolboys, juniors and U23/elites without contract. We missed the masters’ races but caught the finish of the schoolboys finish. 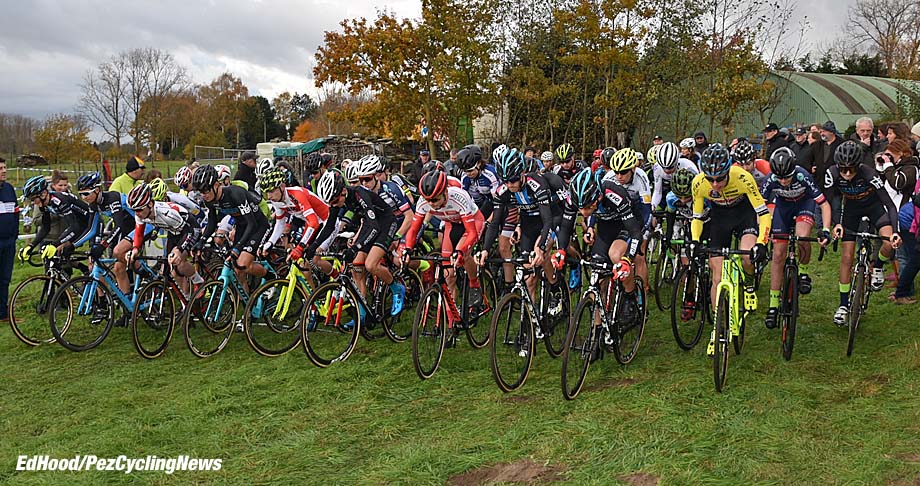 ‘Charge of the Light Brigade’ – that’s the start of a Belgian ‘cross, the juniors went off like team sprint man number one’s. 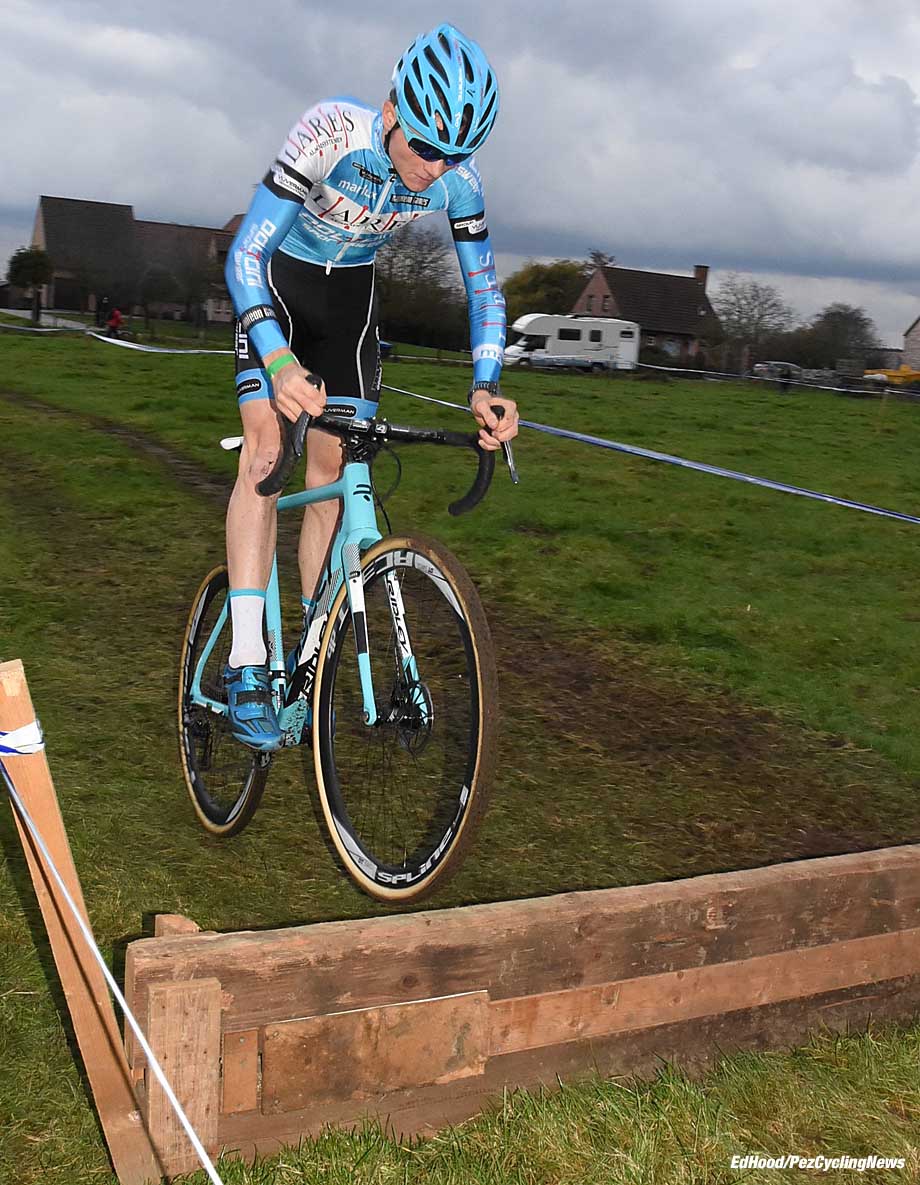 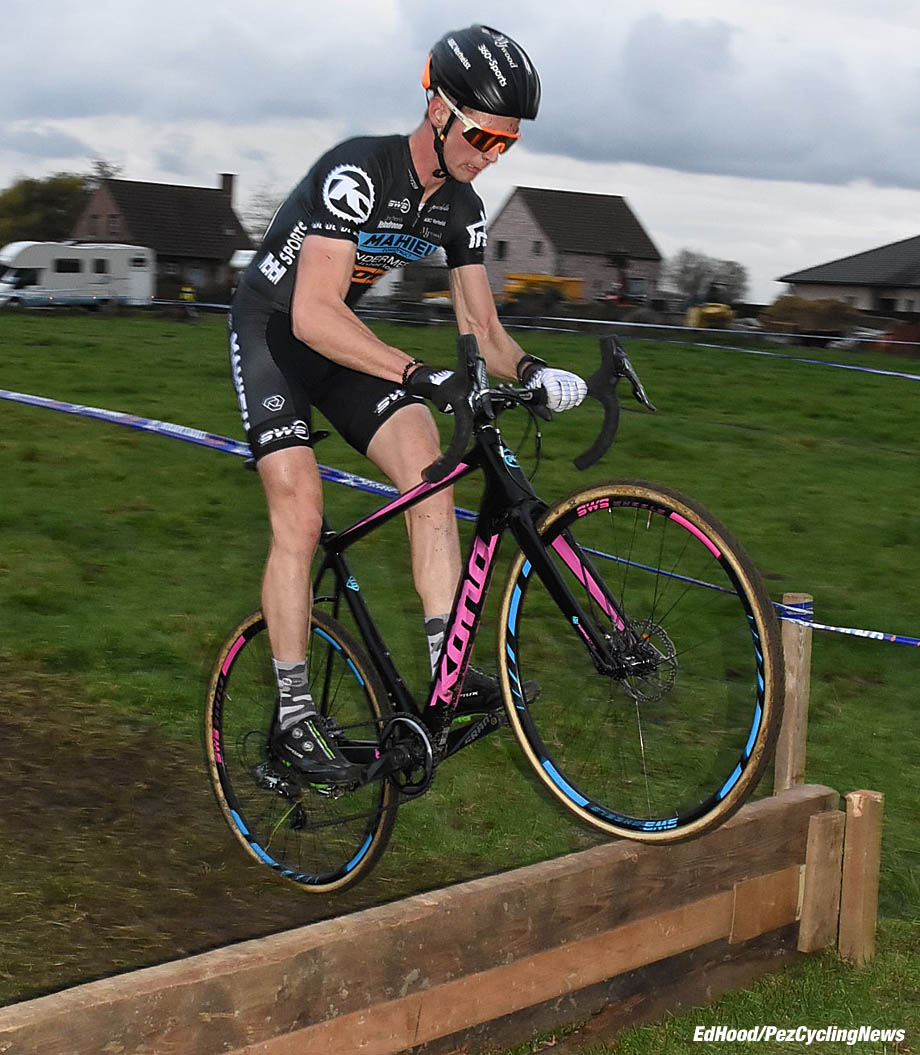 We’ll be running a full report on our day in the fields but thought you might like to see how the fast guys hop those hurdles? 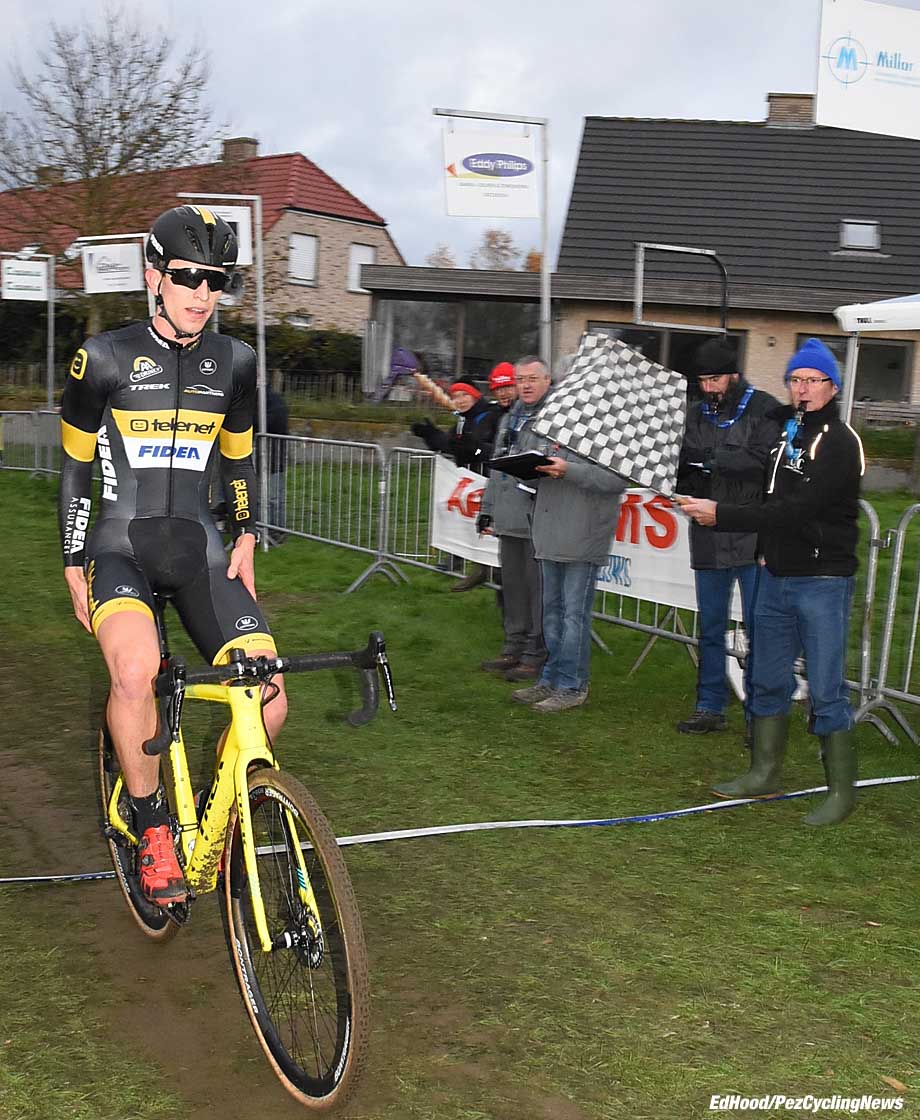 Winner Yenti Bekaert is actually still a junior and could well be a name for the future. 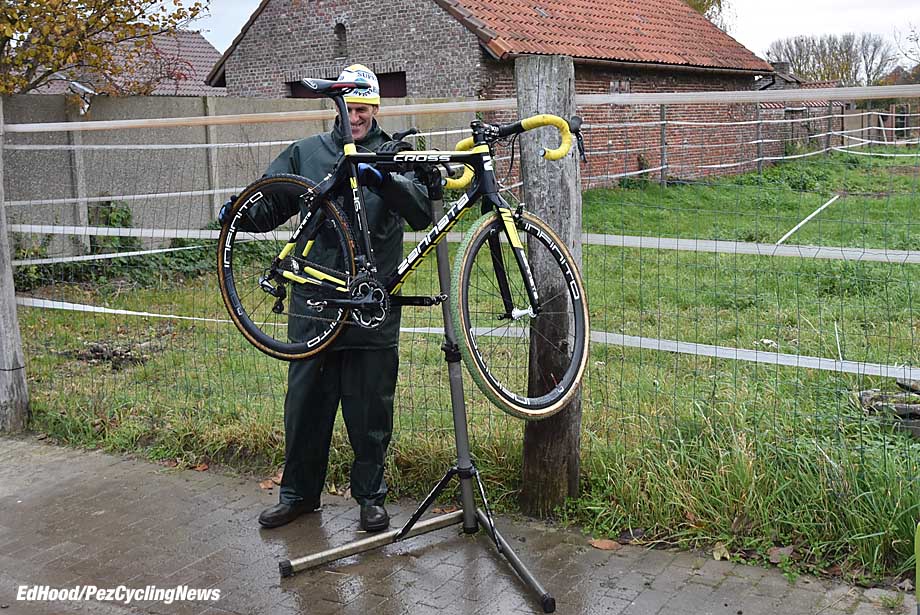 It was cold, damn cold as we headed back to the hire car but the bikes have to cleaned, no matter how cold it is – there’s a race tomorrow, you know? 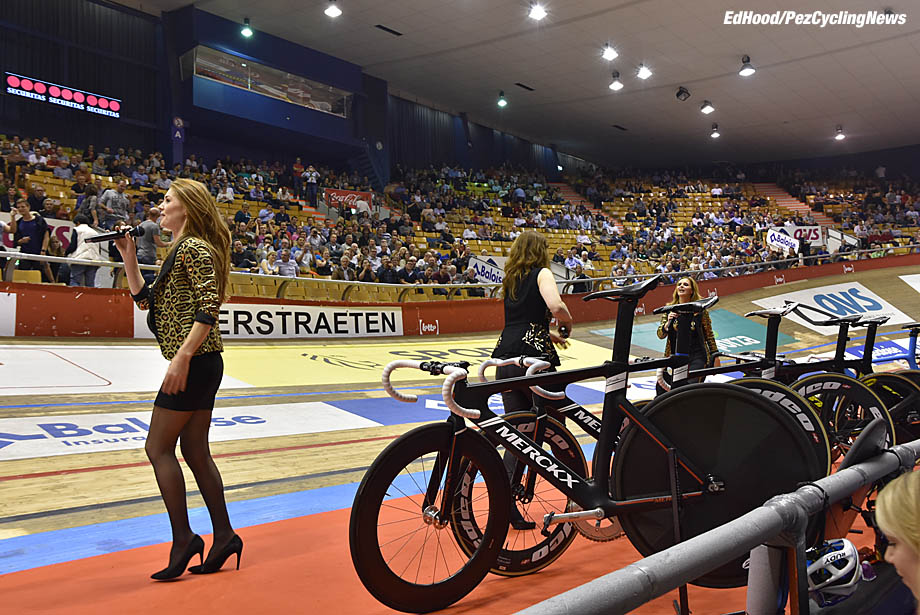 Gary Hagger had the night off and it three lovely ladies serenaded us, The Supremes they were not but with legs that long, who cares? 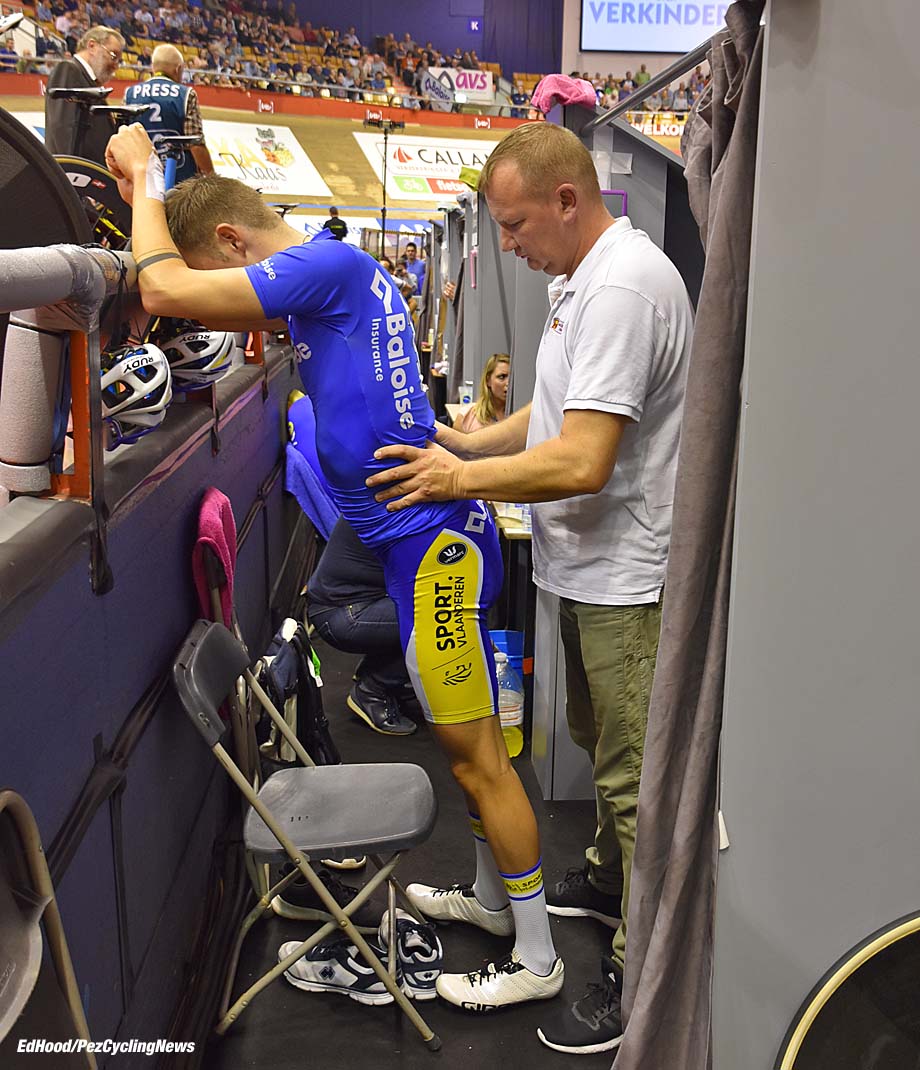 Moreno has been nursing a bad back through this race and between races his soigneur Tino was working to ease the pain. 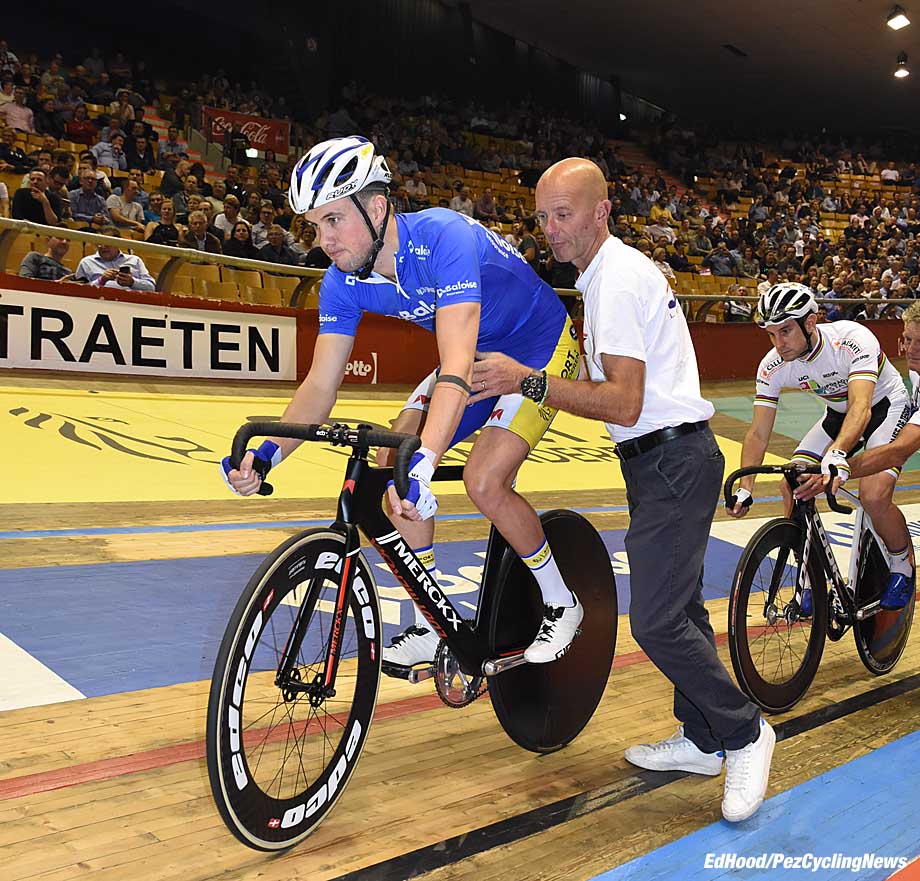 But he looked sharp enough in the Derny with our mechanic amigo, Dirk administering the big push at the start. We’d fancied watching the 500 meter time trial but the program was running hideously late and Saturday is always a good night for tunes in the Vivaldi; Billy Paul with ‘Only the Strong Survive’, Englebert’s Europop version of ‘Strangers in the Night’. 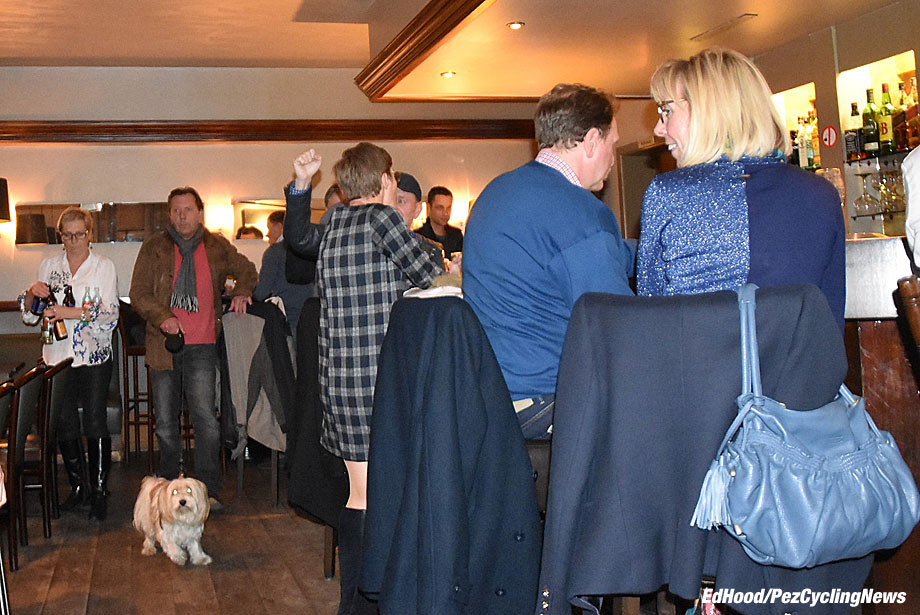 Dave had to drag me out sometime wearing on for 03:00 am, when does The Vivaldi call ‘time!’? Who knows?

Sunday: Years of practice meant we were up for breakfast on time and in the Kuipke where our amigo Dirk Van Hove was taking care of the Kiwi U23 team. 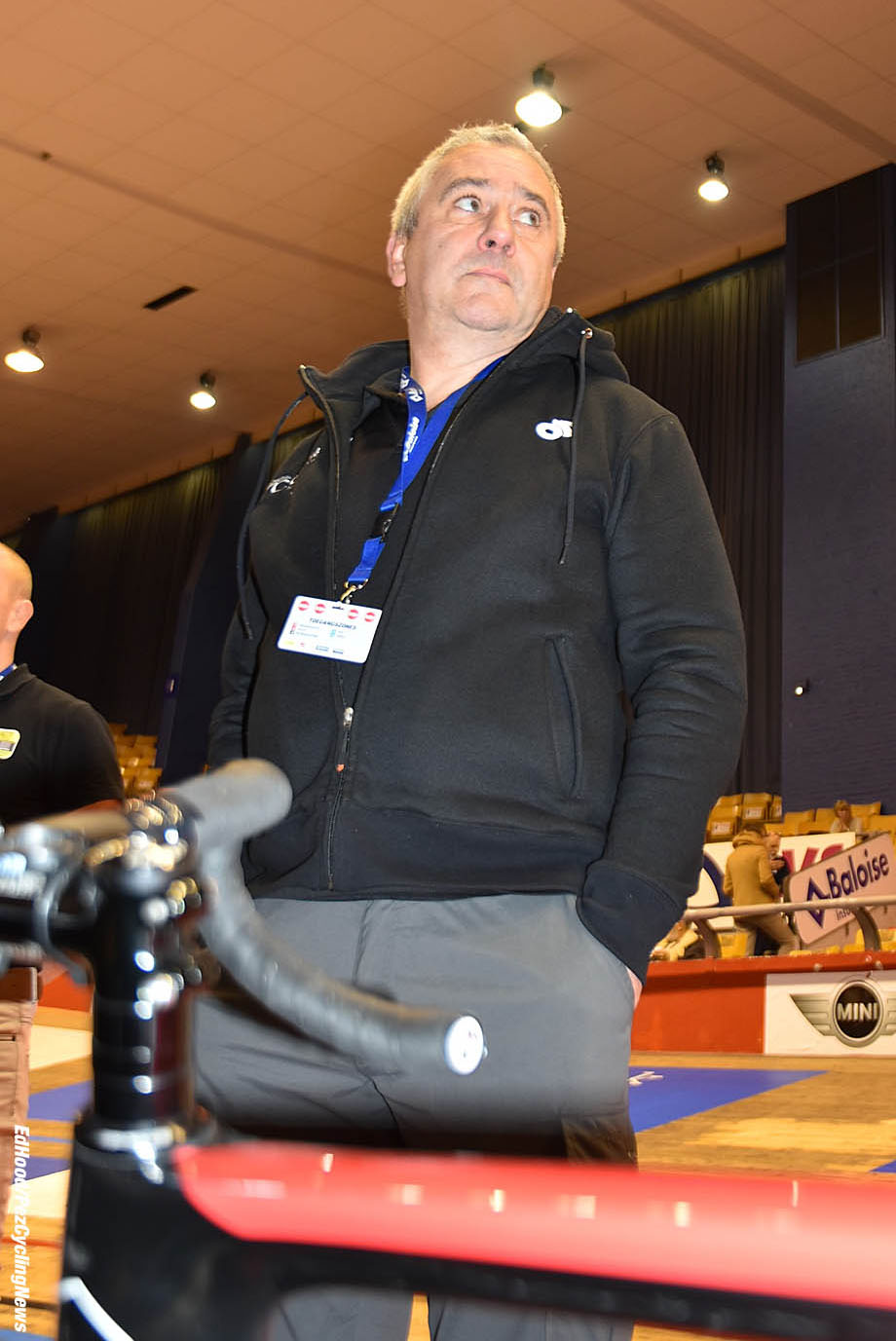 It wasn’t an inspired race and Dirk’s face says it all – the local Belgian lads ran away with it. 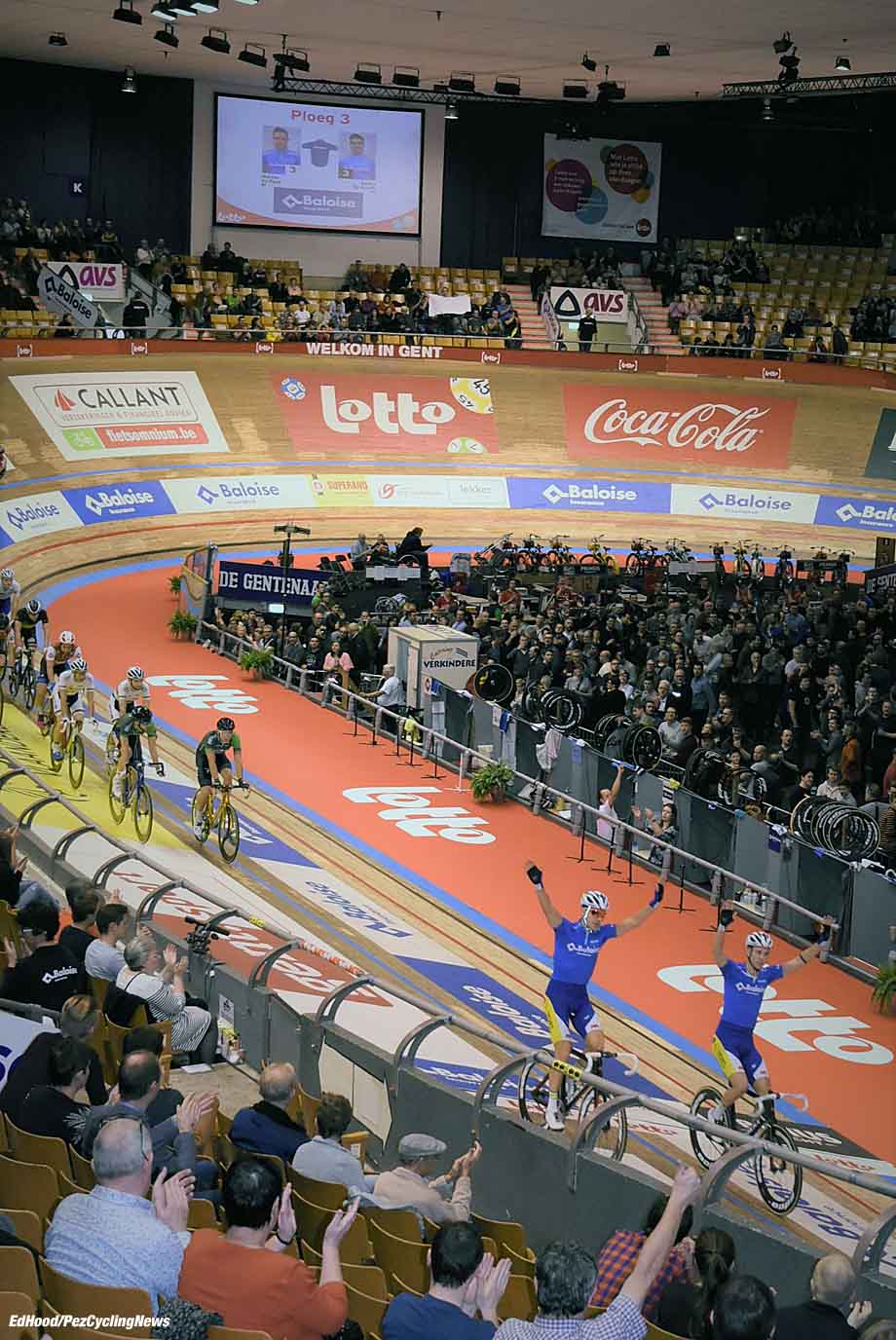 For the first time, we caught the rolling presentation of teams; some riders like is as a good warm up and others think it’s a bore. 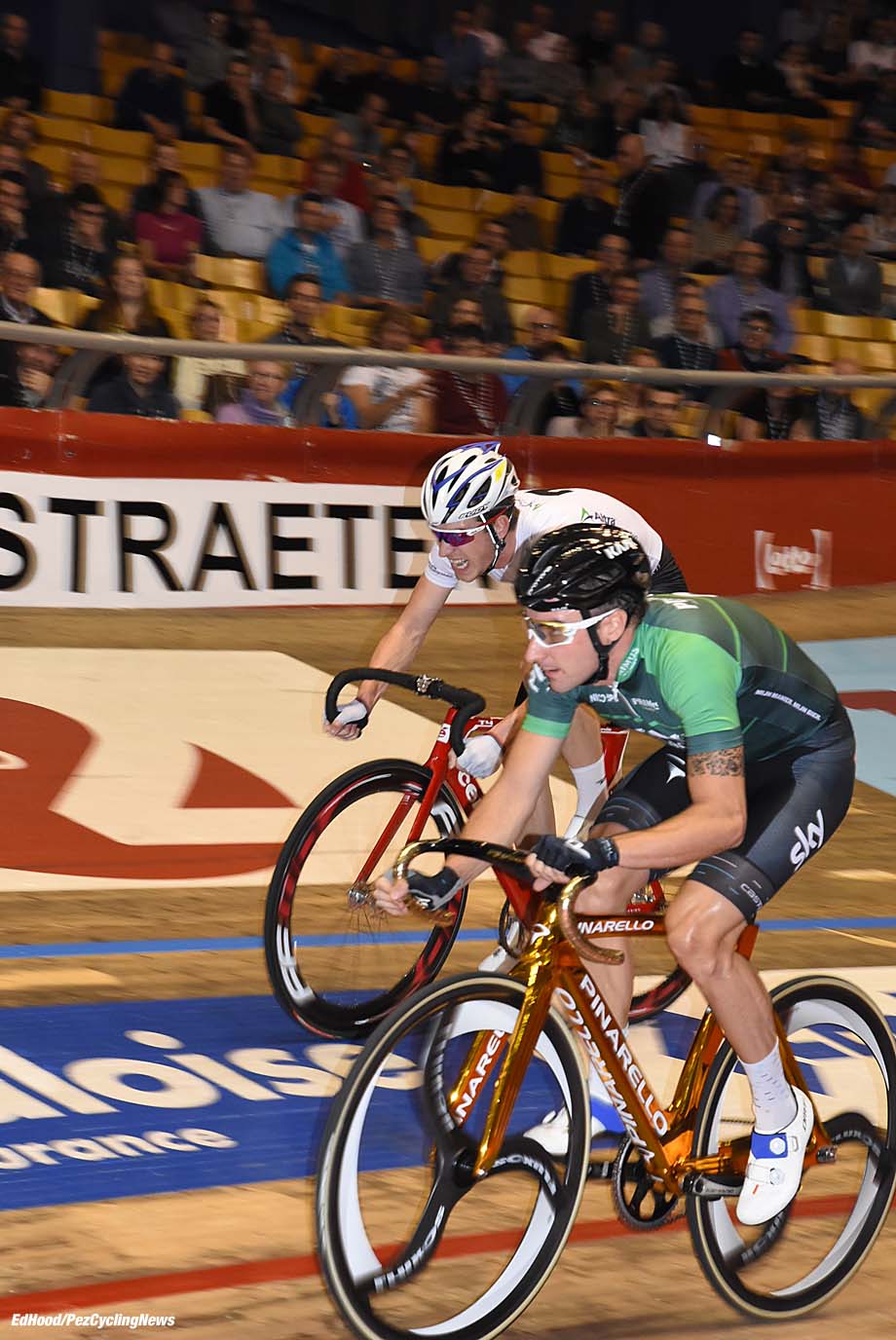 Mark and Ollie battled hard in the devil but Viviani was just that bit too quick for everyone. 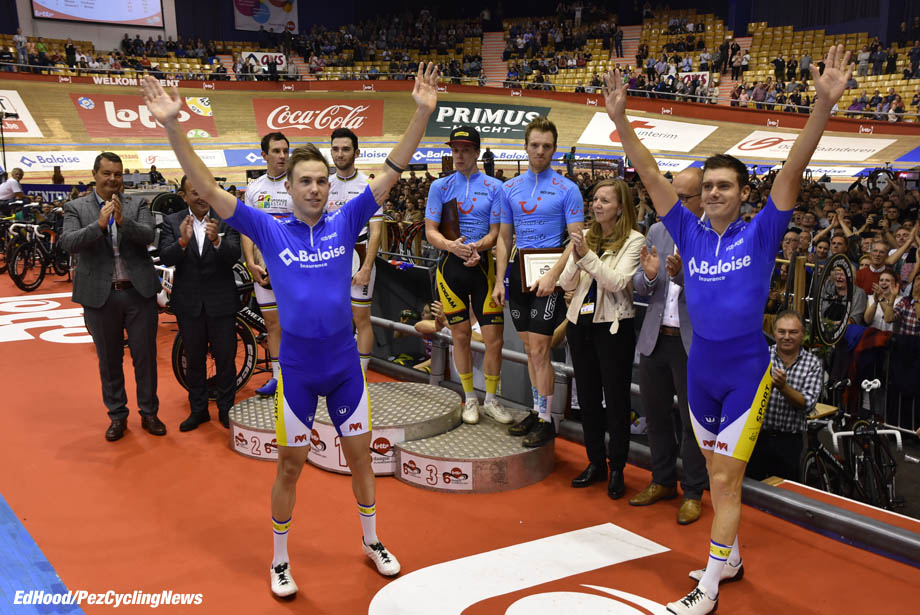 The final chase wasn’t great but Kenny and Moreno WERE the best team on the track – I just wish they were more of the ‘Bruno Risi School’ where it’s not just a last chase, it’s the final act of an opera. 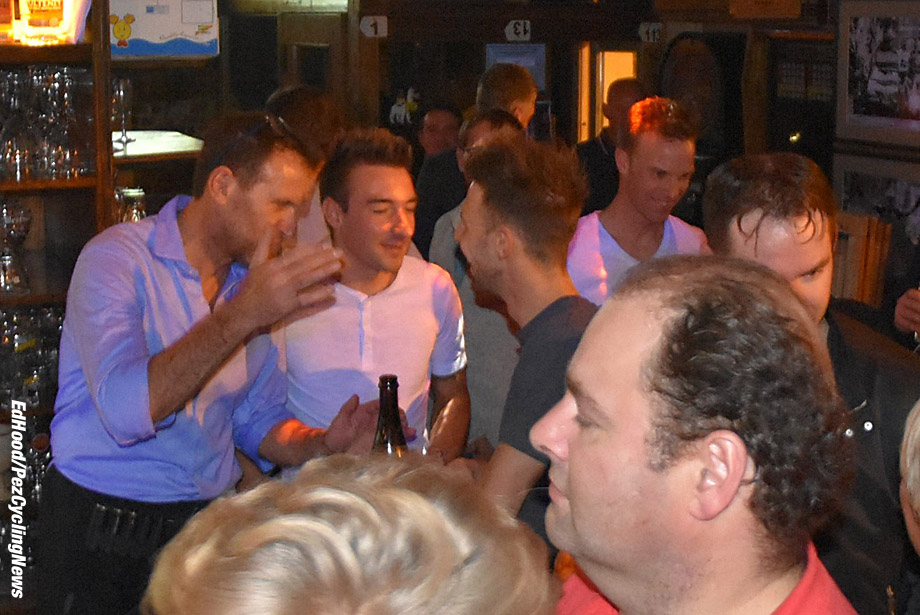 As I said to Iljo Keisse up at his dad’s bar, de Karper after the race; ‘we miss you, man!’

Monday: No ‘crosses on a Monday and most of the shops are shut so we headed into town to see our amigo Ian Whitehead who works with Fietsambassade. Gent, which is supported by the City of Gent and is a huge bike hire/repair depot which operates as a non-profit making organization. 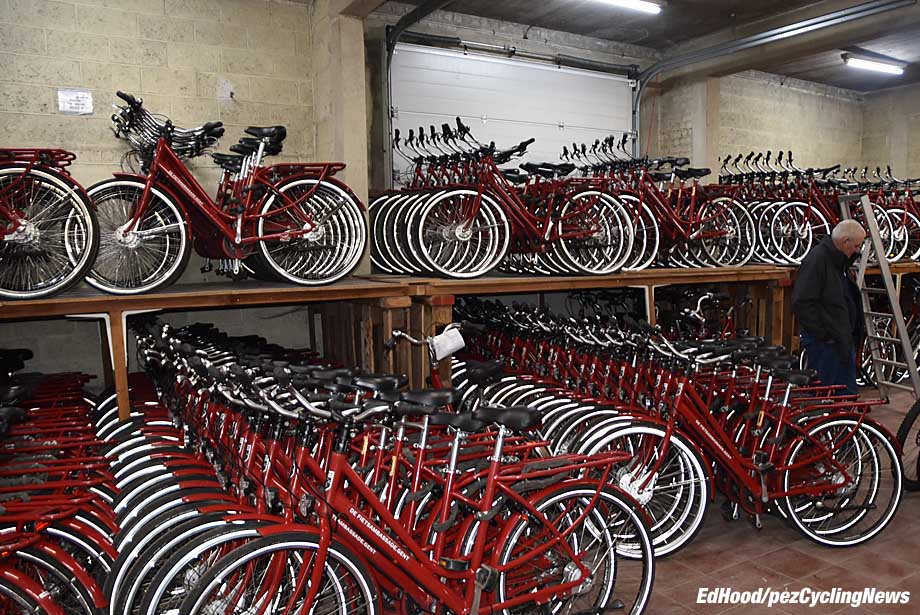 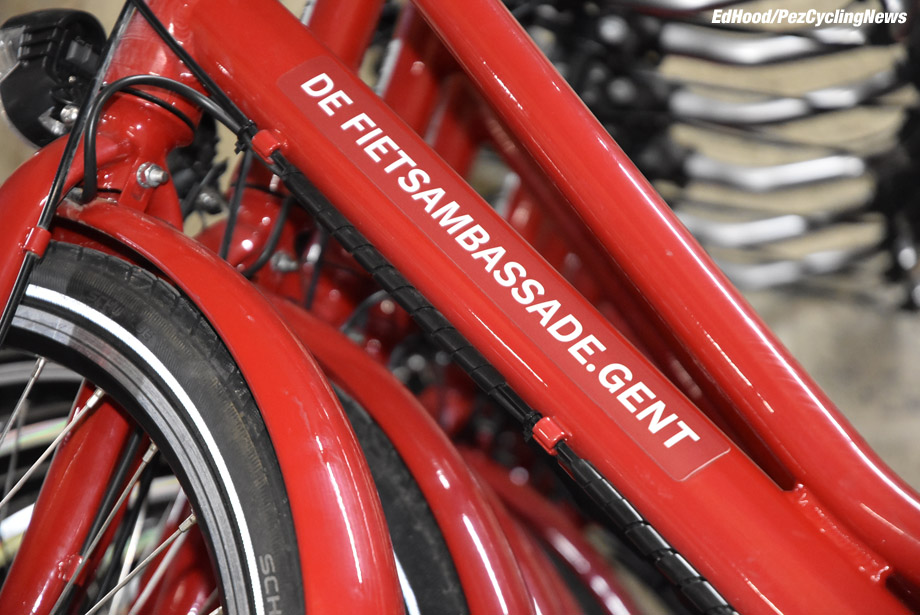 The city aims to take over from the Dutch cities as ‘The European City of the Bicycle’ with programs like this and the introduction of more and more bike lanes around the city. You only think you’ve seen a lot of bikes in one place until you visit here. 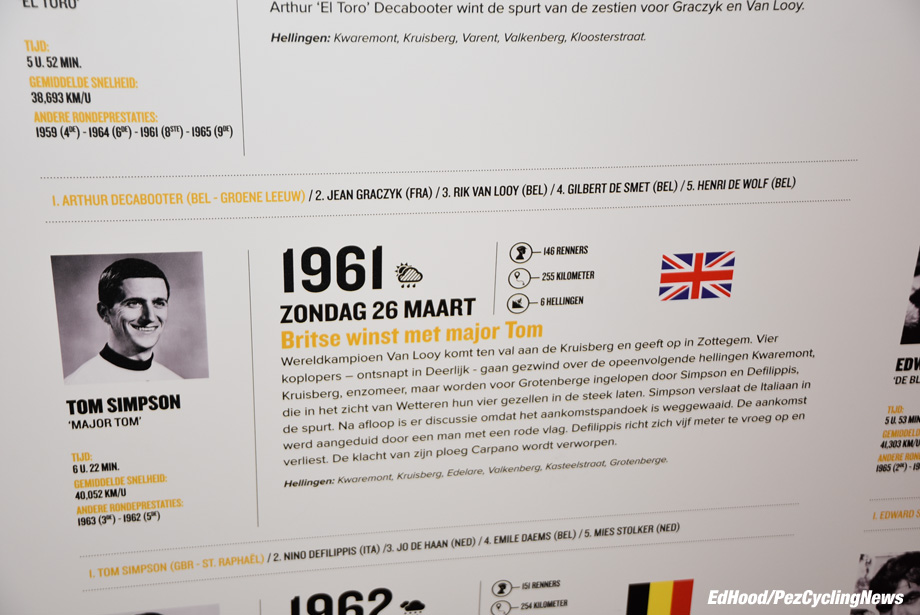 The Tour of Flanders Museum in Oudenaarde, we haven’t visited for ages – it was worth the trip.
It’s still a thrill for me to see Tom Simpson’ name up there with those of some of the greatest bike riders who have ever lived. In the window there’s a row of cobbles with the name of every winner painted on them – the 1977 entry has two though, Roger De Vlaeminck the official winner but on top of it is one for the ‘moral victor’, Freddy Maertens who Le Gitane sat on for 70 kilometers and duly out-sprinted Freddy whilst Maertens was declassed for an ‘illegal bike change’. 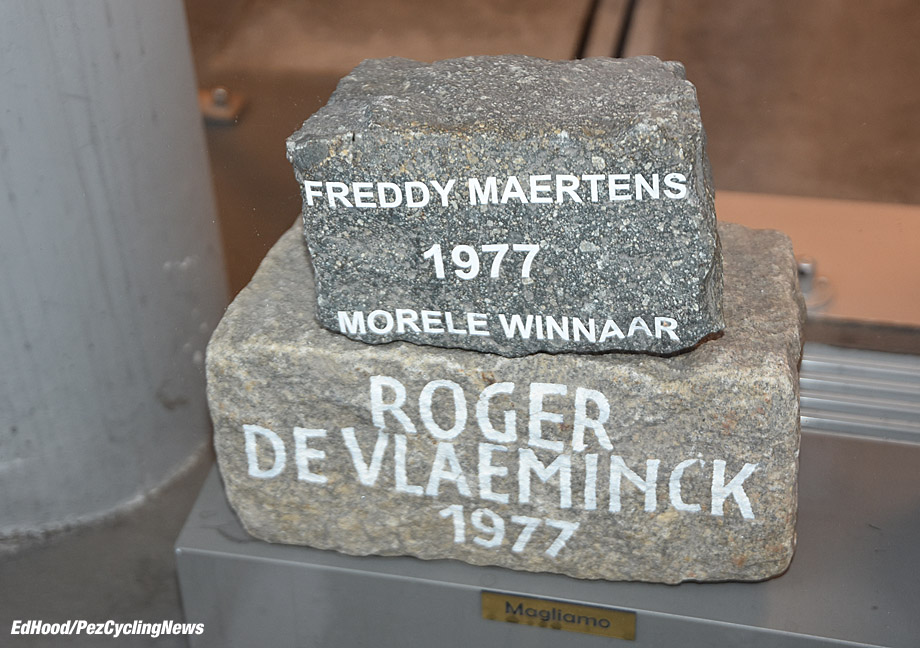 What many forget is that Freddy was ‘double declassed’ as he also failed a dope test. Different days. . . 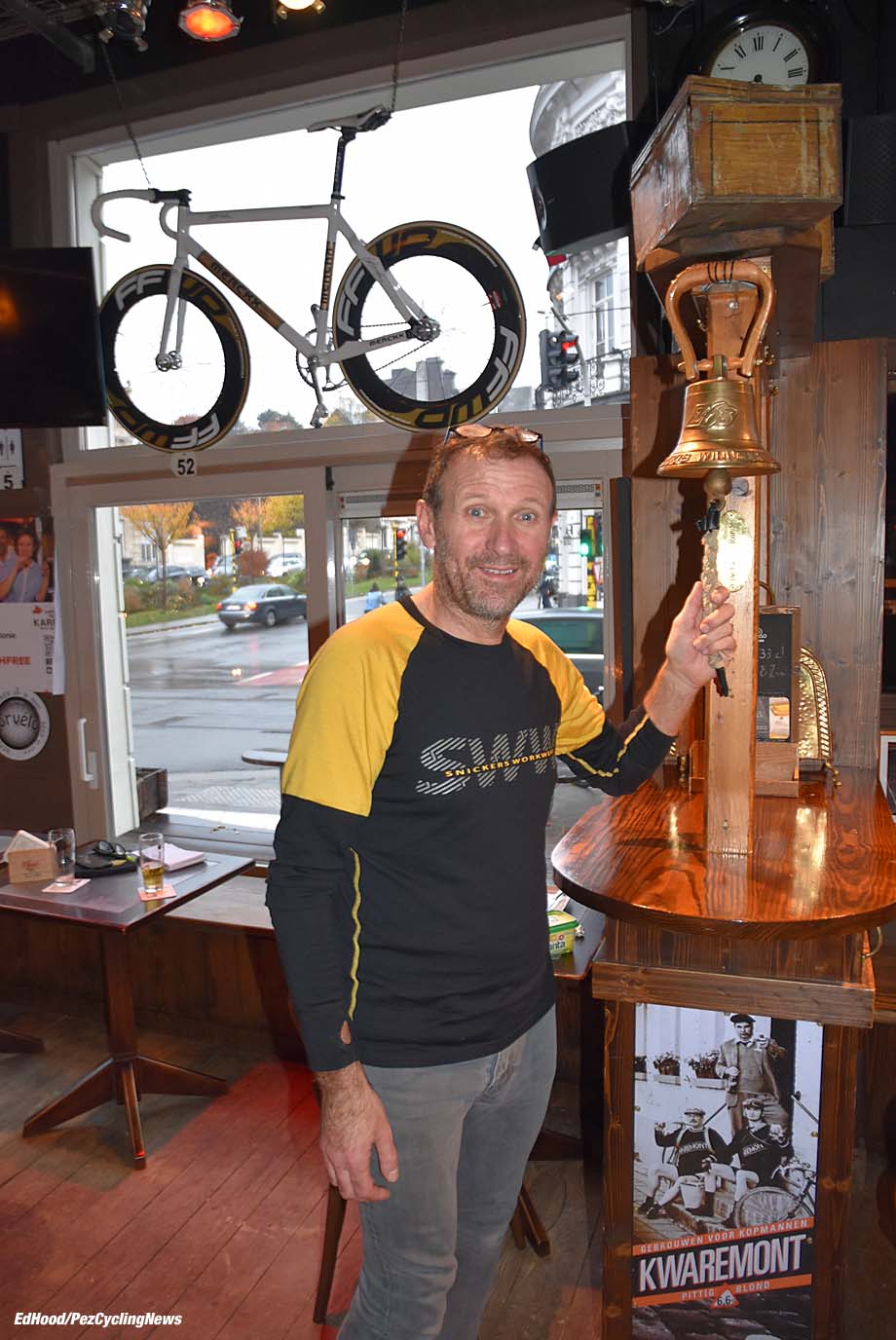 Then was it back to de Karper to interview Iljo’s dad, Ronie – that will run soon and it’s a goodie.
What was left to do? 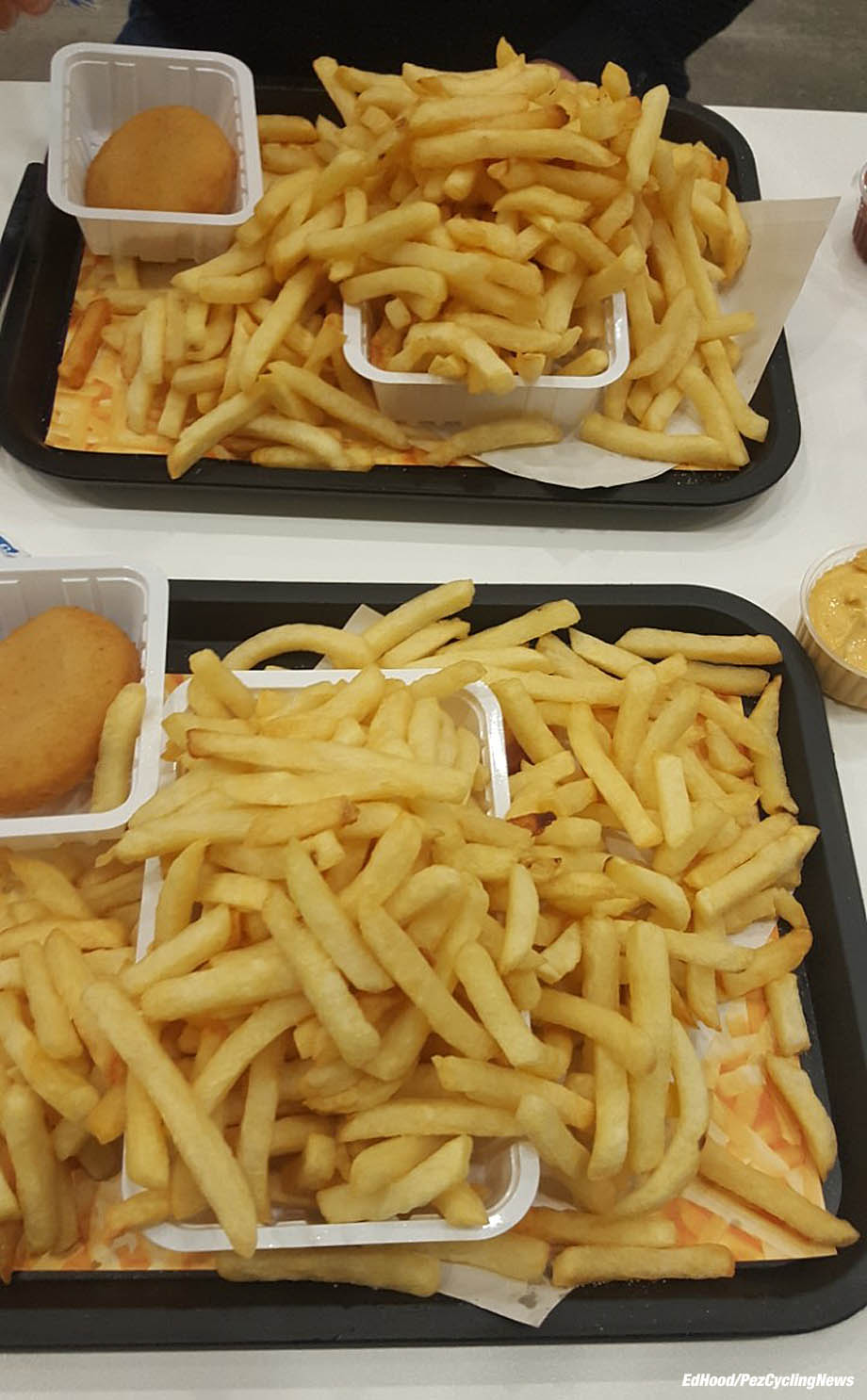