Matt Wood talks to author Geoff Drake about his book: ‘Team 7-Eleven: How an Unsung Band of American Cyclists Took on the World – and Won’ which was published in 2011, ten years ago, the ground breaking team was started 40 years ago. A great insight behind the scenes of the time, that we thought was lost.

# This interview was originally recorded in September 2011, but never published.  You can read the PEZ review of ‘The Story Of Team 7-Eleven’ HERE. # 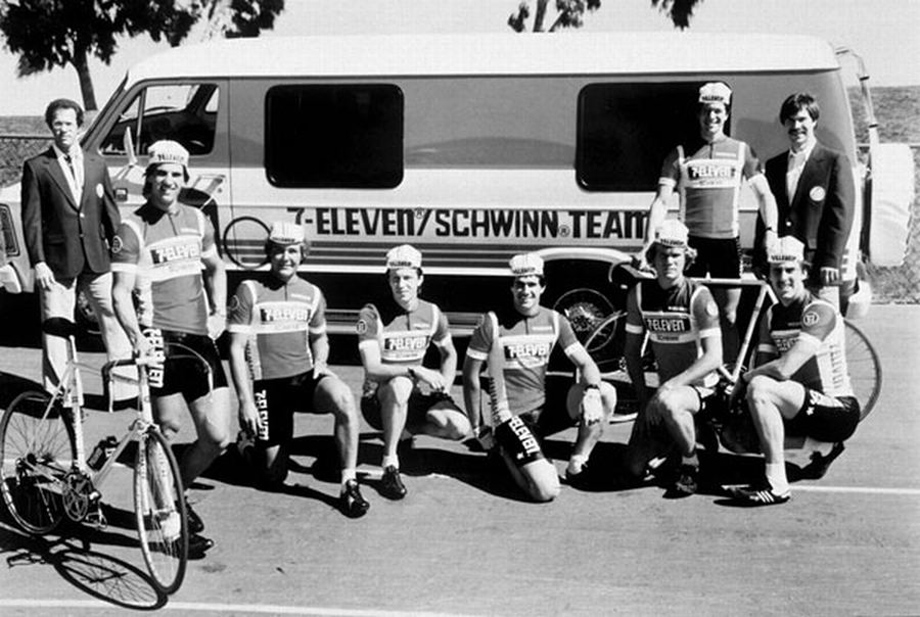 We thought this article was lost, but we recently received an e-mail from Matt Woods and attached was this interview he did with Geoff Drake during the official release party of the Team 7-Eleven book at Interbike 2011. Matt recorded an interview that we published with Jim Ochowicz on the same night, but this interview from September 2011 with Geoff Drake was never published.

PEZ: Tell me how you met Jim Ochowicz and describe the genesis of the book “Team 7-Eleven How an Unsung Band of American Cyclists Took on the World-and Won”?
Geoff Drake: I was the Editor of Velonews in the mid 80’s when it was in Vermont. And then I was Editor of Bicycling magazine after that for a number of years. So, I was really the contemporary of these guys in a lot of ways. And I got to know them pretty well. I covered the major races during that time. I covered the Tour de France and World Championships. And as much as I am supposed to be an unbiased journalist, I really developed an affection for these guys at the time and what they were trying to accomplish. They had an incredible amount of energy and enthusiasm and love of the sport. So, given my familiarity with these guys and what they were trying to accomplish, I think I was the logical choice for Velopress to write this book. It took about four years of interviews and research for me to do it. It was great fun for me because I was able to reconnect with all of these guys. I had always as part of my approach, ridden with these guys a lot even though I can’t claim to be anywhere near their level. I like to get to know them that way. And I attended a lot of training camps with them as a journalist. So, for all of those reasons, I think I became a logical choice to do it. 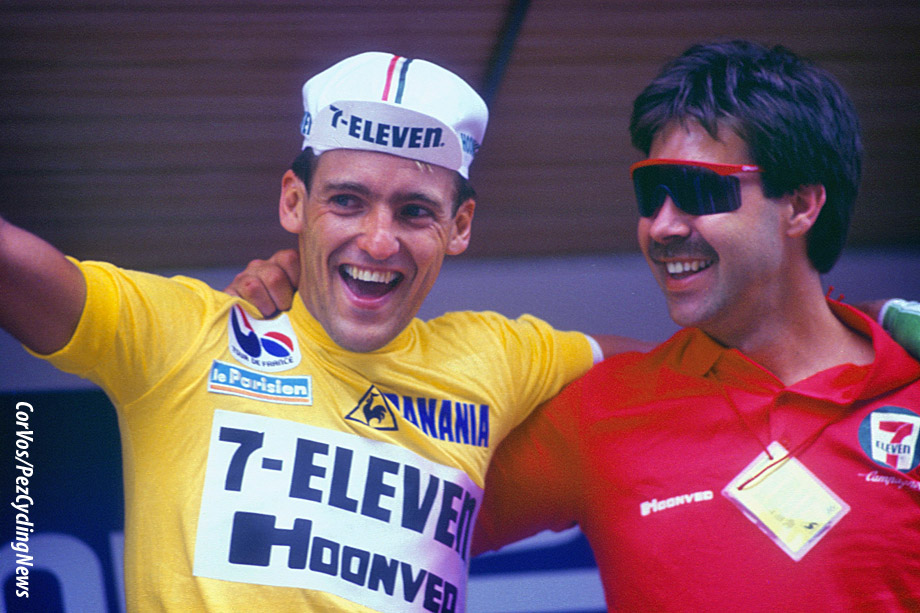 PEZ: There was a book written called “The greatest game ever pitched.” It was about a baseball game played in 1963 at Candlestick Park in San Francisco. The two pitchers were Juan Marichal and Warren Spahn. Both pitchers are Hall of Fame pitchers. The game went over 23 innings. If you could choose one story line or one race or one person from the 7-Eleven team to write a book about who or what would that book be about?
The event that crystallizes 7 – Eleven – that represents that team the most is the ’86 tour. This was a team that had this serfdom of energy and talent co – mingled with these phenomenal missteps. So, they would achieve these amazing things, and then within days they would have some calamity. That was the sort of comic element of it. Phenomenal talented guys, but they kept sort of tripping up. And in the ’86 tour, you had Alex Stieda, #210, the last number in the race, the last team to be entered in the race. The first day of the race, he is in the Yellow Jersey. He is not only in the Yellow Jersey, but the Polka Dot Jersey and the Green Jersey and all told five jerseys. Three hours later, they have to do an afternoon time trial. They crash into each other, they end up in an argument, throwing water bottles at one another and within a few days, they have won a stage. So, as Davis Phinney said, “It was maximum glory and maximum embarrassment.” And this sort of was characteristic of the team in the early years as they were making this sometimes halting inroads into European Pro cycling. It was obvious that they were incredibly talented, but they were also obviously novices. 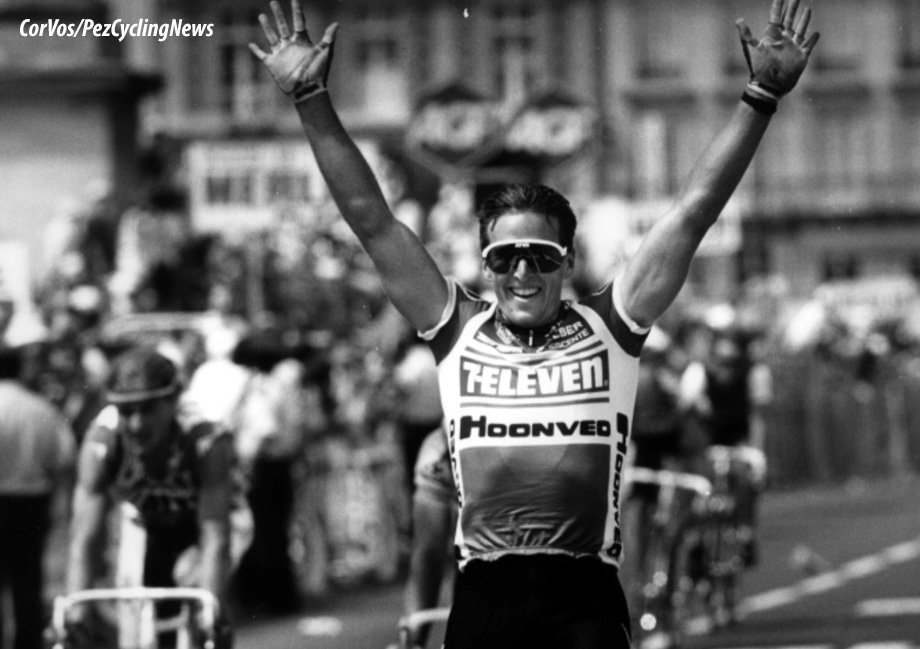 PEZ: I couldn’t help but think that Ron Kiefel and Davis Phinney were the original Mark Cavendish and Mark Renshaw. You spoke about other famous combinations such as Jerry Rice and Joe Montana. Can you tell me a story about Phinney and Kiefel?
These were two guys whose personalities and athletic capabilities were all complimentary. Davis said he could not win without Ron. Ron was the quintessential lead out man. I think anybody who knew cycling in that era and thought about successes thought about that duo. And Ron talks about the fact that Davis winning was like he was winning. They were that tight. That focused on their goal. That was the ultimate measure of success for both of them. Fortunately, Ron was able to win a fair amount in his career. In one year he won three national championships: Road, Time Trail and Team Time Trial. So, he was phenomenally accomplished. But you also had this wonderful sort of dove tailing of personalities. So, Davis Phinney physically was not very tall but, very imposing, big biceps. Ron was tall and thin. Davis was very sort of assertive and boisterous. Ron was very shy and withdrawn. So their relationship was not only complementary as sprinters but also as personalities. And as Michael Aisner of the Coors Classic says: It filled reels and reels of tape. You had this incredible hulk, arguing, asserting himself, throwing his elbows out in a sprint and you had the withdrawn, self-effacing Ron Keifel.  As a journalist, you could write about it endlessly because of this yin-yang of personalities. It was really a wonderful thing to behold. Kiefel would say: “Davis is the media star and I am the media knucklehead.” I taught him how to be more measured, and he taught me how to be perhaps more assertive. And that is the kind of relationship they had. And it endured for years and years. I will never forget watching these guys in action. 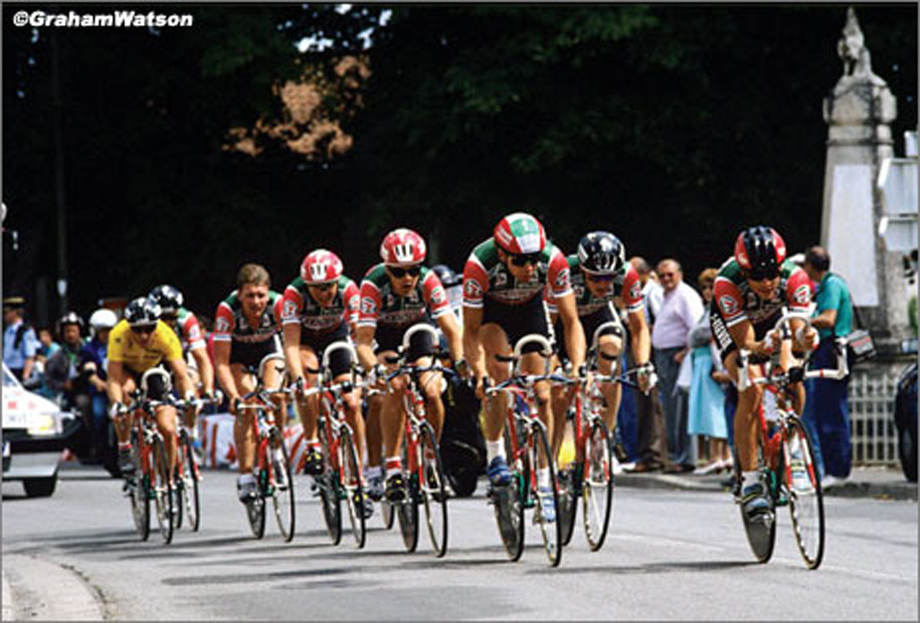 The disastrous team time trial of 1986 was much improved upon in later years, like when Steve Bauer wore yellow in 1990

PEZ: Tell me what you think the legacy of the 7 – Eleven team is?
When I think about the legacy of the 7 – Eleven team, I think about who is the most prominent cyclist of our day. And that is Lance Armstrong. And you have to ask yourself the question. Would Lance Armstrong, being who he is have achieved what he achieved if 7 – Eleven had not laid the foundation? And of course, Lance is a phenomenal athlete. And someone of his stature would have succeeded no matter what. You can easily make that case. But would he have won as many tours as quickly? Would he be as poignant on the world stage as he is today if 7 – Eleven had not made all of those inroads? This was a cultural phenomenon. These guys went to Europe, prior to them there were a few lone guys willing to go over there and sleep on people’s floors and eat poorly and somehow eke out and existence in Europe. But it was predominantly not done until the 7 – Eleven corporation decided to bank role this team and go over there and eventually produce the cultural shift that I think enabled the cyclists of succeeding generations to do what they did. And I like to say that they influenced the European culture as much as the European culture influenced them. They eventually had to stop being quite so rebellious and assimilate themselves into Europe, but the European culture was very much affected by those guys and what they were able to accomplish. 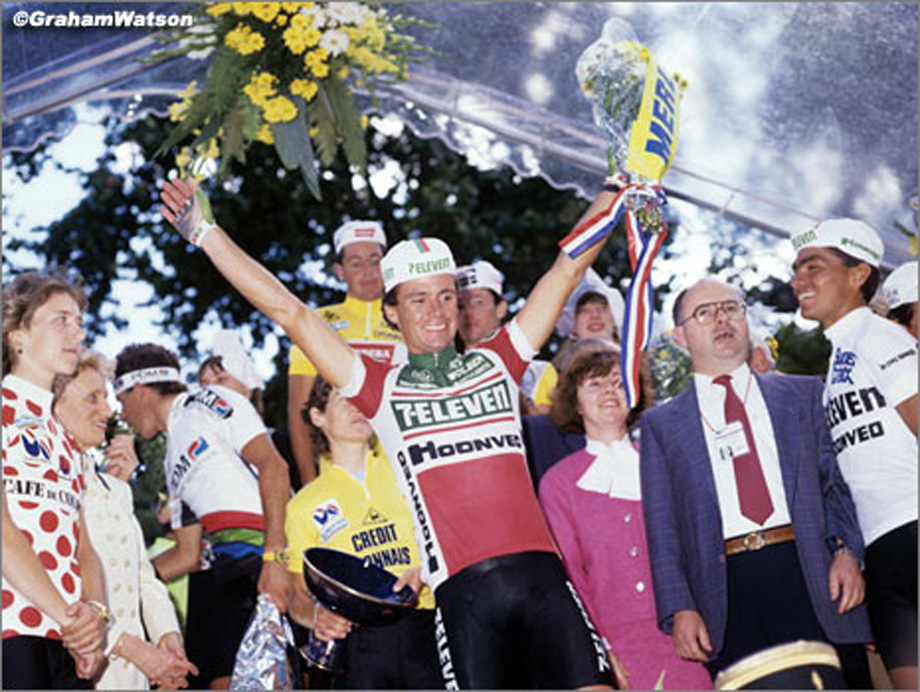 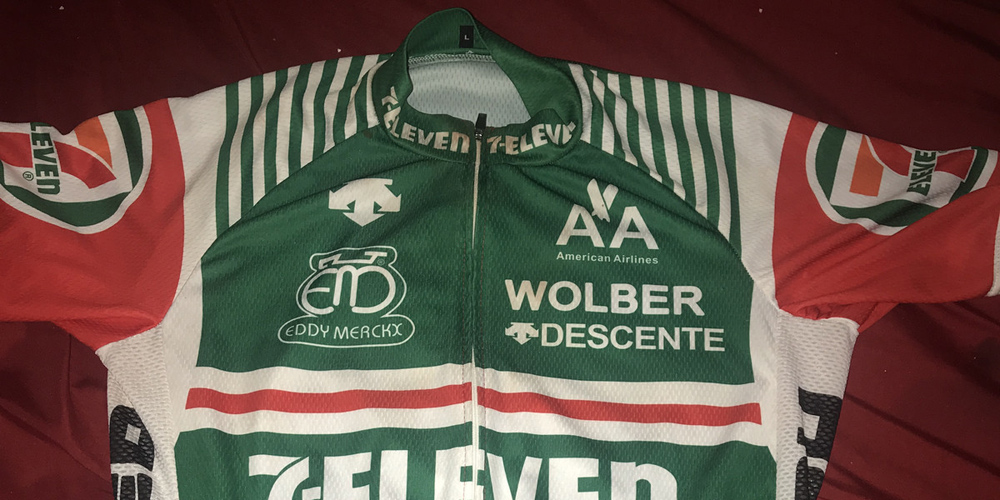