PEZ seasoned two more “journalistas” the weekend before last by sending our eager reporters deep inside the Ghent 6 Days track championships. The two Davids (Berson and Fischer) made the most of Belgian beer, boards, and bike racing… 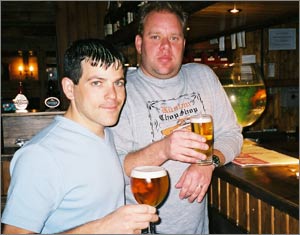 The tone for the weekend is ominously set in the Philadelphia airport lounge…
My friend, ex cat 3 racer, and trip photographer David Fischer and I decided to start celebrating early with a drink in the airport bar next to our gate in Philadelphia. We arrived over two hours early to give ample time for security measures and with a United Airlines, voted No. 1 for On-time flights we were ready to kick back and enjoy.

With about 10 minutes until boarding began we both decided to use the facilities in the airport rather than on the airplane. I then overheard from the loudspeakers our names and that we had two minutes until the gate would be closed. The math doesn’t add up here, does it but now we know why United Airlines is Number One for On-time flights: they simply depart before they’re even due to board.

Things improved on our flight to Brussells when two older gentleman next to me returning from Hawaii told me they have been to every World Championship race since 1949. Those Belgians lob=ve bike racing! 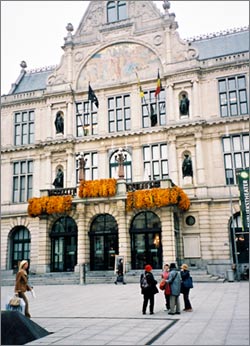 Upon arriving in Ghent we made our way to Citadel Park to check out the track and pick up our official press credentials. It doesn’t resemble a velodrome at all, from the outside. 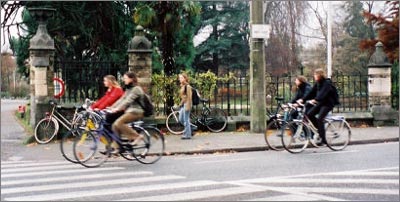 We immediately noticed how fit ALL the women are and that they are all on bicycles. Packs and packs of them just hammering into corners on wet bricks with underinflated tires. Impressive. 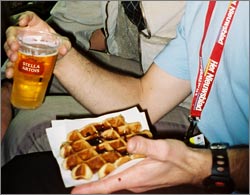 Next we crashed out for a few hours until the 8pm start. My friend and Quick-Step Davitamon rider Kevin Hulsmans, his wife Kelly, Under 23 Worlds Silver Medalist Johan Van Summeren, and two other friends of Kevin met us at the track to watch the races. I enjoyed beer and waffles with chocolate, three servings worth, but Kevin was being very strict. His old teammate Leife Hoste of Lotto/Domo was down on the infield matching beers to laps. My money would be on Kevin any day. 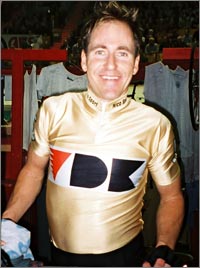 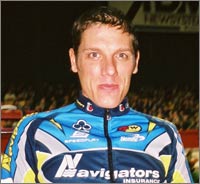 We also said hello to Marthy Nothstein. We were amazed they could even stand and stop to say hello. Marty had sent me a World Champion’s Jersey back in 1995 that is framed and hanging in my house. Navigators Insurance and Colnago sure hired a class act when they brought Marty on. 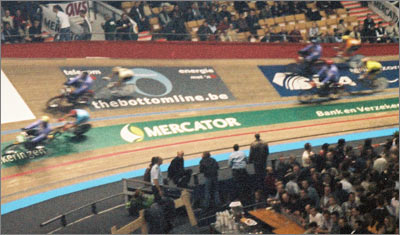 The racing was awesome but the Derney was something I hadn’t seen before. It was amazing to see six motorcycles on the track that was so short and steep. We called it a night around12 and head back to the hotel.

We had VIP dinner reservations for the next night starting at 7. My friend that I had met racing back in ’91 was coming up from Germany to meet me after dinner.

Day #2
We spent the morning walking around old Ghent and found our way to a bar owned by the father of 6 day racer Iljo Keisse of the John Saey Team. 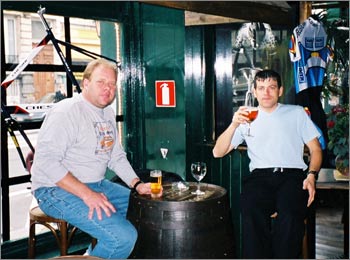 His bikes and jerseys were hanging in the window along with a giant poster of Marty. We ordered a few beers and he returned our 1 euro tip saying it was to large. However the female bartender earlier had no problem keeping it. Later that night Marty’s partner and Iljo’s would both become ill and Marty and Iljo were then paired together.

VIP Treatment!
Due to the size of the track being so small and steep only general admission was permitted in the infield. The music and dinner was in a large tent off to the side of the building. Dave Fischer and I were taken to our table and poured some champagne. 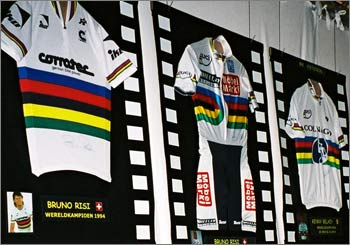 World Champions’s Jerseys (something I try to collect) were hanging on the walls , the table set with wine, and TV screen showing parade laps on the track. 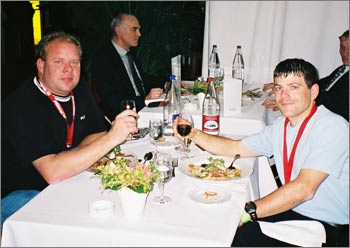 We enjoyed wine, lobster, lamb (I asked for something without meat so the chef made me some Pasta) and loved hanging with the VIPS. Unfortunately this was about as good as it got for me.

Too Much Fun Isn’t Good For You…
We left the dining area to go meet my friends from Germany in the infield. After only five or 10 minutes I started to feel hot and groggy and mentioned I would go for a soda. At that point I passed out falling forward with my wallet in my hand! My friends grabbed me, and the crowd just opened up for me to get through. The lights, heat, disco ball and as I learned recently, the Flu, all took their toll on me. The medical tent checked my blood pressure and all seemed ok. I thanked my friend for driving 4 hours to visit me and then returned to the hotel to sleep.

I had a horrible night and the next day decided to get to an airport hotel in Brussells. I was in bed from 2pm until 6am when we started getting ready to head home. Travelling sick really sucks but I’d say it was definitely worth it. On those group rides when it’s rainy or cold and someone says “just like Belgium” I’ll add a bit more to the story.