Giant Bicycle’s global media camp hosted journos from around the world to meet their 2009 bikes – including the new and improved TCR Advanced SL, the lightest & stiffest road bike ever created by Giant. These rides are sweet, and the riding sweeter in Mallorca Spain – here’s how it looked…

From its handcrafted composite frame with its sleek integrated seatpost and massive MegaDrive rectangular downtube, the ride is already turning heads. PEZ joined a select group of journos invited to partake in the exclusive launch, soak up the full tech presentation from Giant’s designers and technicians, and log some miles on the new rides on the roads of Mallorca Spain. 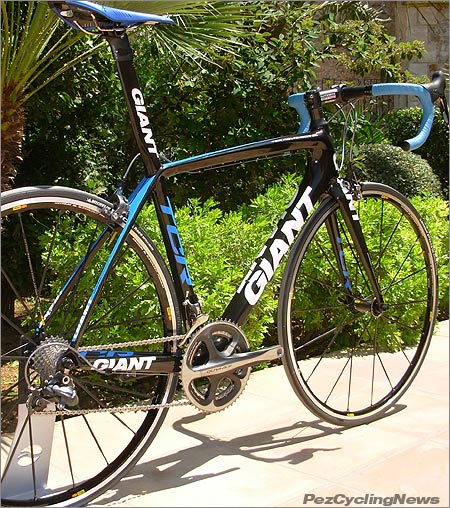 Planned as an intensive 3 days of ‘all Giant, all the time’, our start was slightly delayed by (you guessed it) – air travel. Some kind of mechanical forced a return to Toronto after 2 hours in the air, and that led to a series of missed flights and ultimate late arrival.

New to PezCycling is Niagara native Tim Lefebvre, a veteran of 26 years of racing, currently working with Steve Bauer bike tours, he took the time to represent PEZ in Mallorca Spain. 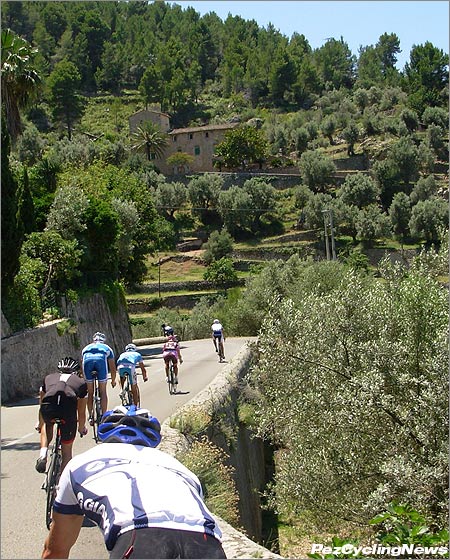 The tech ‘n spec on the new bikes is coming later this week, but to get us started, here’s a look at life at the Giant media Camp. 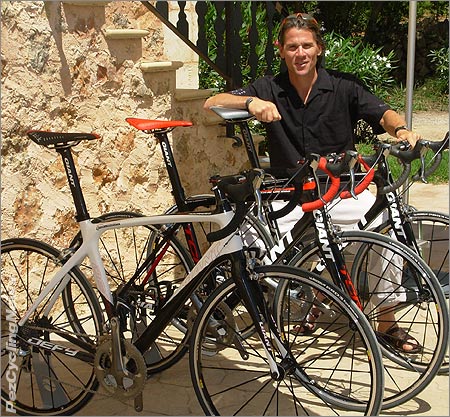 PEZ correspondent Tim Lefebvre poses with his new rides. In advance of our arrival, Giant prepared all three bicycles specifically for my personal measurements (and each of the other 30 journalists). An 09 TCR Advanced SL in full black, a TCR Advanced in red and black and their newest model, a white Defy Advanced. 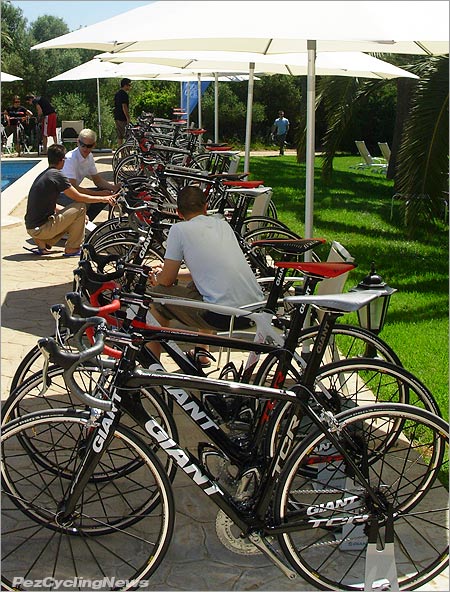 Having them set-up by the hotel pool under an umbrella, each journalist is met by his own umbrella, chair and three models of high end Giants dressed in full Dura-ace.

The schwag was plentiful with Giant showing their appreciation to media that traveled half-way around the world to be introduced to their 09 line. 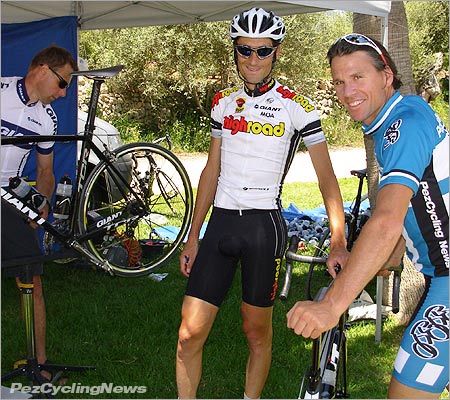 Canadian ProTour rider Mike Barry joined the opening rides from his home in Girona for the day. Excited about his Dauphine form and recent selection to the Olympics Mike was in very good spirits as he anticipated a spot on Team High Road’s Tour squad. Team High Road has already debuted the bikes, and early reports are very good – like you’d expect anything else from Giant. 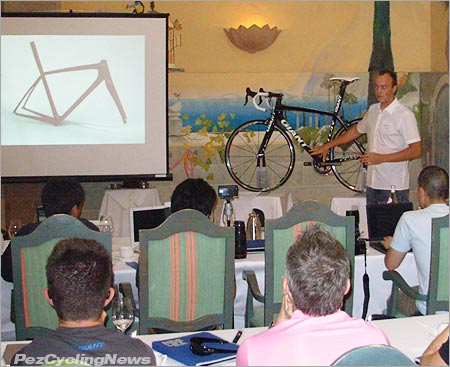 France’s Pierre-Henri Madras, the product development manager for Giant introduces the ’09 TCR Advanced SL, “at the heart of all 2009 Giant road bikes is an innovation that revolutionized the world of high-performance bikes when introduced more than a decade ago”. 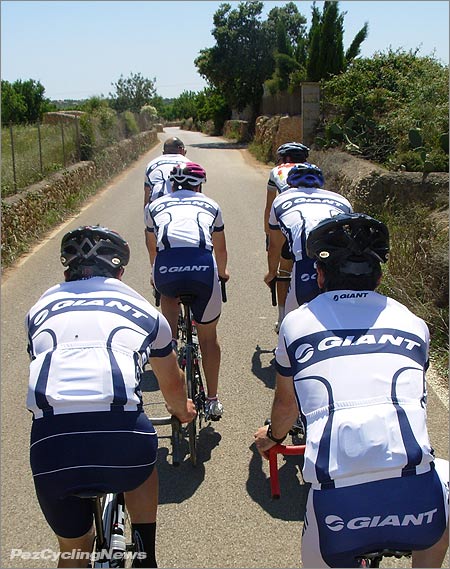 The media troops head out on a 12km trial loop to put their new rides to the test. Hills, descents, tight curves and long straights, time to light it up! 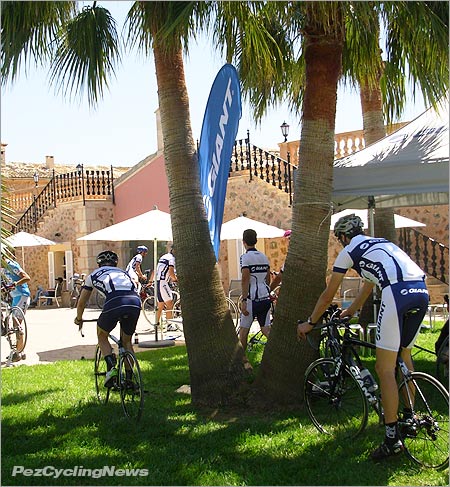 The boys rolling in, ready to swap pedals onto their second or third rides for the day.

Day two had the journalists pick their favourite steed for a long ride through the hilly countryside of Mallorca. A group for the serious riders embarked on a five hour day with three mountain passes to ultimately test the bike on climbs, descents and flats. Group B would be a lighter ride with a four hour route and group C would set out on a two hour ride. 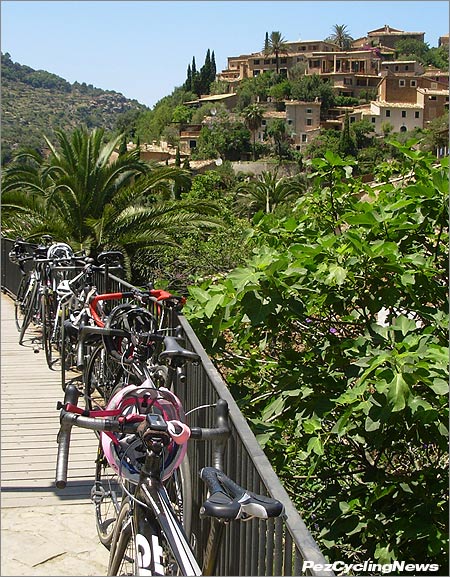 Heading out from Santa Maria the Giant clad peloton headed towards Soller and the Puig Major, the toughest climb besides the Cobra on the island. Loaded with picturesque coastal views amidst quaint rock-lined roads, this was one of the most beautiful rides, making you almost forget about what awaits. 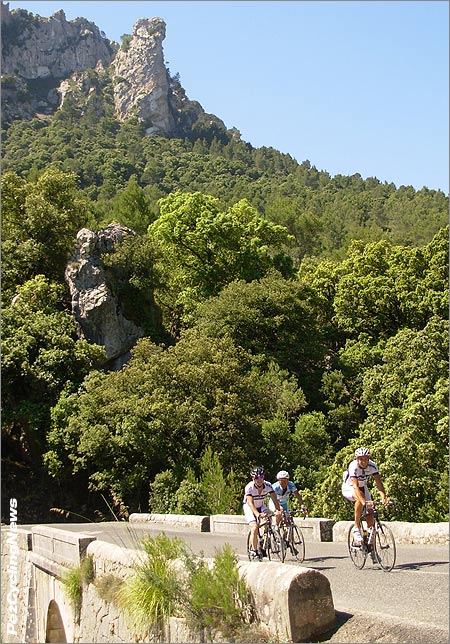 Then you hit the mountains, great twisty climbs with decent grades, climbing from five to eight kilometers. Inevitably it splits and you make quick friends with those around you to pass the time on the way up. We stop at the top and wait for the group, grab some water and then have some fun on the descents. Long and loaded with switchbacks the Giant boys put their TCR’s and Defy’s through the paces, lining it down the mountain. 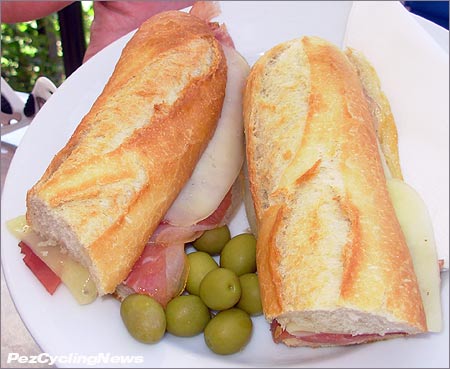 Cafe con leches and bocadio sandwiches with some Coke’s and water at any one of a dozen little cafes (all as cool as the next) is the perfect mid-ride stop to trade stories and tell some lies. Weather is scorching over here as bicycles abound – but nothing like the spring where it is not uncommon to see another 1000 riders a day, still there are plenty of two-wheel friends to smile and wave at. 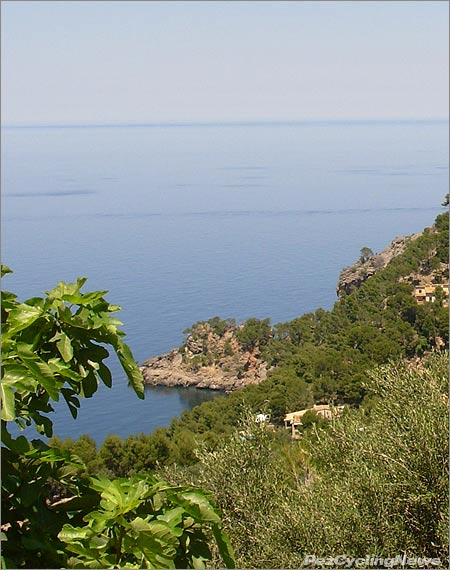 Mallorca, Spain has always been a hot-spot for German and English tourists, and now inundated by thousands of cyclists in the spring who can count on the weather and great routes throughout the island. No less than eight ProTour squads call Mallorca home during this time, and it’s obvious why. 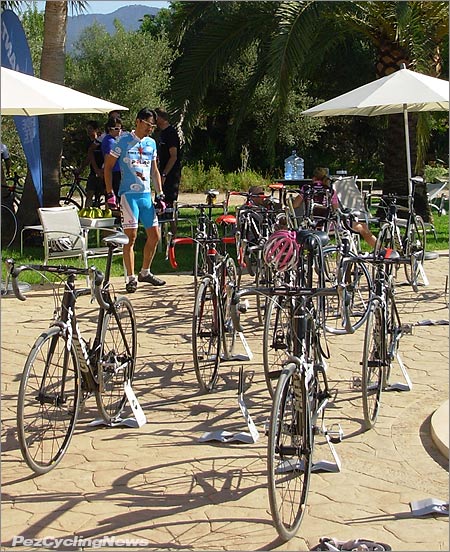 Giant knows how to put on a spread, and treat us journos to some fine riding. It’s even better that they build some great bikes – making our jobs as writers a lot easier. The Giant global staff has been incredibly accommodating with knowledge and information about their new products, always finding the time to answer any questions and receive some feedback. Media camps can be cool, but this one has been exceptional from rooms to riding. 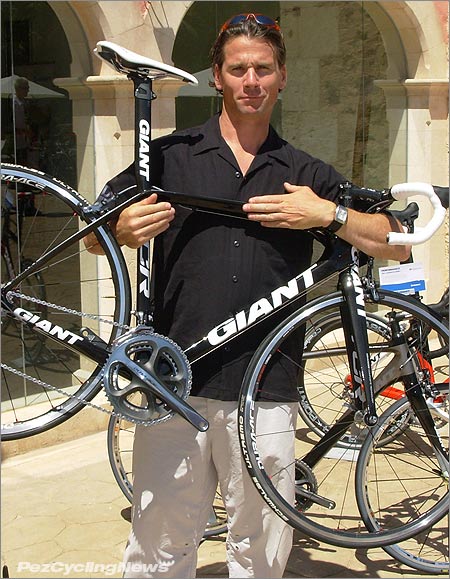 Tim considers how to stuff the new TCR Advanced into his carry-on bag.

• Watch Giant-Bicycles.com for more news, and stay tuned to PEZ for a closer look at the new bikes.

PEZ Interview: A Scot In Asia