Our NeoPro Jordan Cheyne has a lot to talk about today as his Jelly Belly team took the overall win at the Tour of Gila with a top performance from Lachlan Morton. Jordan clearly enjoys being part of the winning team – he takes us through the experience.

If you have read a few bike racer blogs you might have noticed that we tend to have lots to write when things go wrong. Paragraphs and pages can be filled with carefully crafted excuses, explanations and choruses of “next time it will be different”. I am finding there is a lot less to say when things go exactly to plan. When the puzzle pieces all fit together as they did in New Mexico’s Tour of Gila last week the only thing to do is sit back and take a long look at the final product. A big team victory is a beautiful picture indeed and something I have never experienced before in my cycling career. 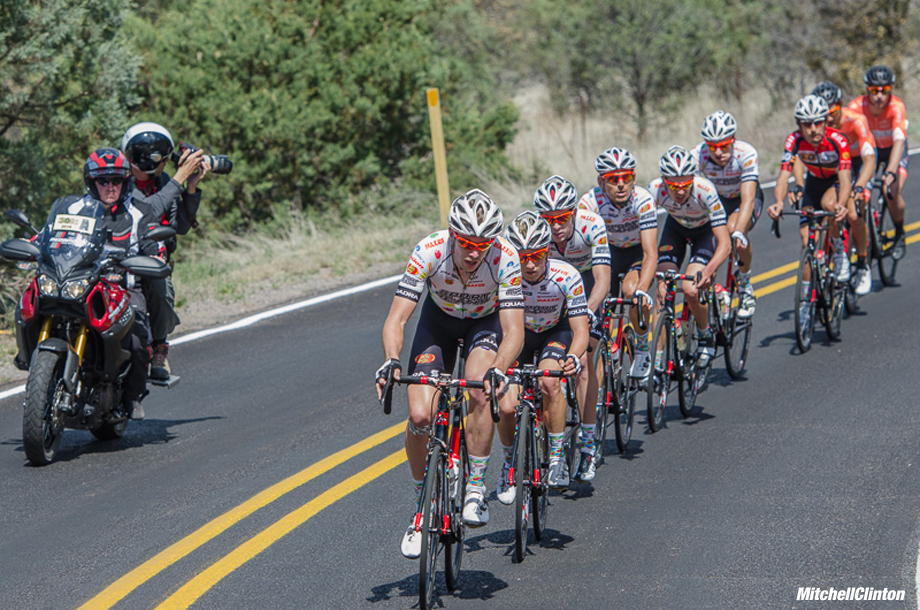 The boys ripping on the front

Things didn’t look so rosy as I wrangled my bike through the ditch with 30km to go in Stage 1. The team had been riding together in formation as we approached the day’s finishing climbs when the peloton erupted in front of us. A curious canine had infiltrated the barreling peloton and dozens of riders were forced off their bikes in a mass pile up. I found some finesse to stay upright and thread my way through a bit of desert and back onto the road. Once the brake dust settled there was a 30 second gap to the remains of the front group and my teammates were on my wheel. Following not so subtle instructions, I throttled my Argon for a few interminable kilometers with Lachlan and the guys in tow. We sifted through the carnage and made contact just as the field entered what has to be one of North America’s hardest feed zones.

Lachlan said he thought my femurs were flexing under the effort and he may have been right, I went deep into the red. For the next 10 km, I tried to recoup my reserves with little success. The race was on and my oxygen debt got me dropped as we headed uphill for the final time.

Luckily my teammates were more than prepared to carry on the assault on the final climb to the ghost town of Mogollon. The team’s quiet muscle, Taylor Shelden, put in a blistering acceleration into the crosswinds and dragged Lachlan off the front with only 2015 Gila champion Rob Britton for company. The trio sped into the final 4km climb with a 30s gap on the field and Lachlan never looked back. Over the closing kilometers Lachlan dropped Britton and stretched his gap to an impressive 25 seconds and over a minute to 3rd. It all seemed to happen in an instant. There was a weighty jubilation at the finish line as we celebrated and caught our breath in the thin mountain air. The victory was sweet but job was now clear. We wanted to take the Red leader’s jersey all the way and take the overall win four stages later.

It is easy for a leading team to mass on the front of the peloton and take responsibility for controlling the race. No one will stand in your way if you want to do the day’s heavy lifting. It is another thing to actually make good on the job. Gila’s 2nd “Inner Loop” Stage can be hectic and grating with its explosive climbs and windy valley roads. The boys made it look easy and the breakaway never had a chance. I put in work on the day’s climbs to neutralize some restless GC contenders and we left Lachlan in good position for the reduced group-finish. He more than paid off our team effort with a surprise 4th place result in the gallop to the line. 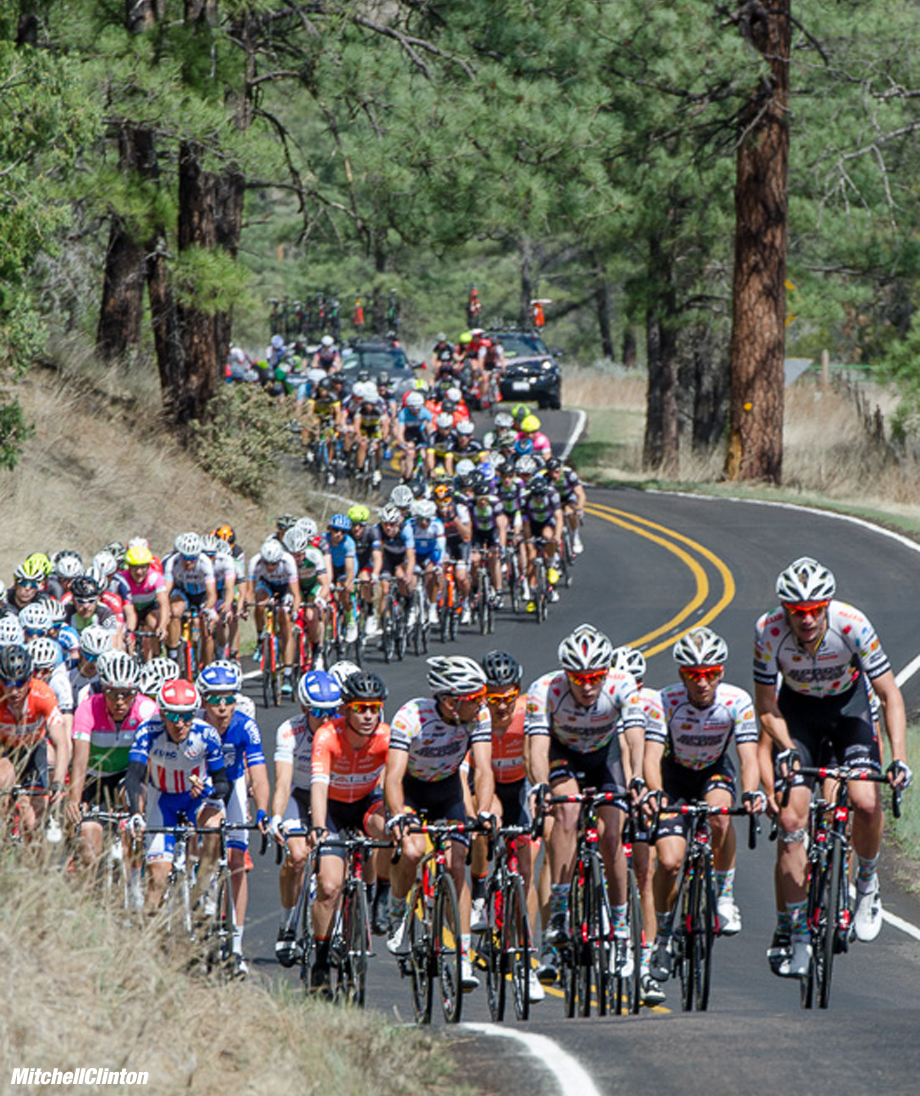 All strung out through Gila National Forest

The next day, I had a bit of a disappointing run in the Stage 3 Tyrone TT. I had good power but inattentive pacing on the highly variable course costing me a personal result. That didn’t stop me from leaping off the trainer mid-warm down when I saw Lachlan blitz across the finish line. He had nearly caught 2nd place rider Rob Britton and extended his GC lead. It was still a close battle but the race of truth bought us a little more breathing room.

The last time I rode the Gila crit in 2014, I was breathlessly counting down the 40 laps as I dangled precariously on the tail of the group. In 2016 I was trading pulls with my teammates on the nose of the peloton as we confidently shut down threatening breakaways. I kept expecting disaster to strike and to be found out as a “crit-pretender” but it never happened. We safely maintained the GC and I think the seamless performance gave everyone a bit of a boost headed into Sunday’s 162km long queen stage with its “monstrous” 3100m of punishing vertical.

The race lived up to expectations and the field threw everything at us from kilometer zero. A 16-man breakaway belted its way clear under tremendous strain and we were forced to start chasing hard with over 130km to go. It didn’t matter. From Mikey (Sheehan), (Ben) Wolfemale and Jacob nailing it through the gusty valley, to Gus and Cujo (Putt) ripping up the opening Category 2 climb the breakaway never even got out of sight. I finished my part of the plan pulling into the always-decisive Cat 1 climb out of Gila’s moonscape Cliff Dwellings. I then watched as Tito (Shelden) and Lachlan weathered a full offensive on the climb’s steep, exposed grades. The race disappeared with Lachlan in the driver’s seat and all we could do was have faith in a perfect team job. 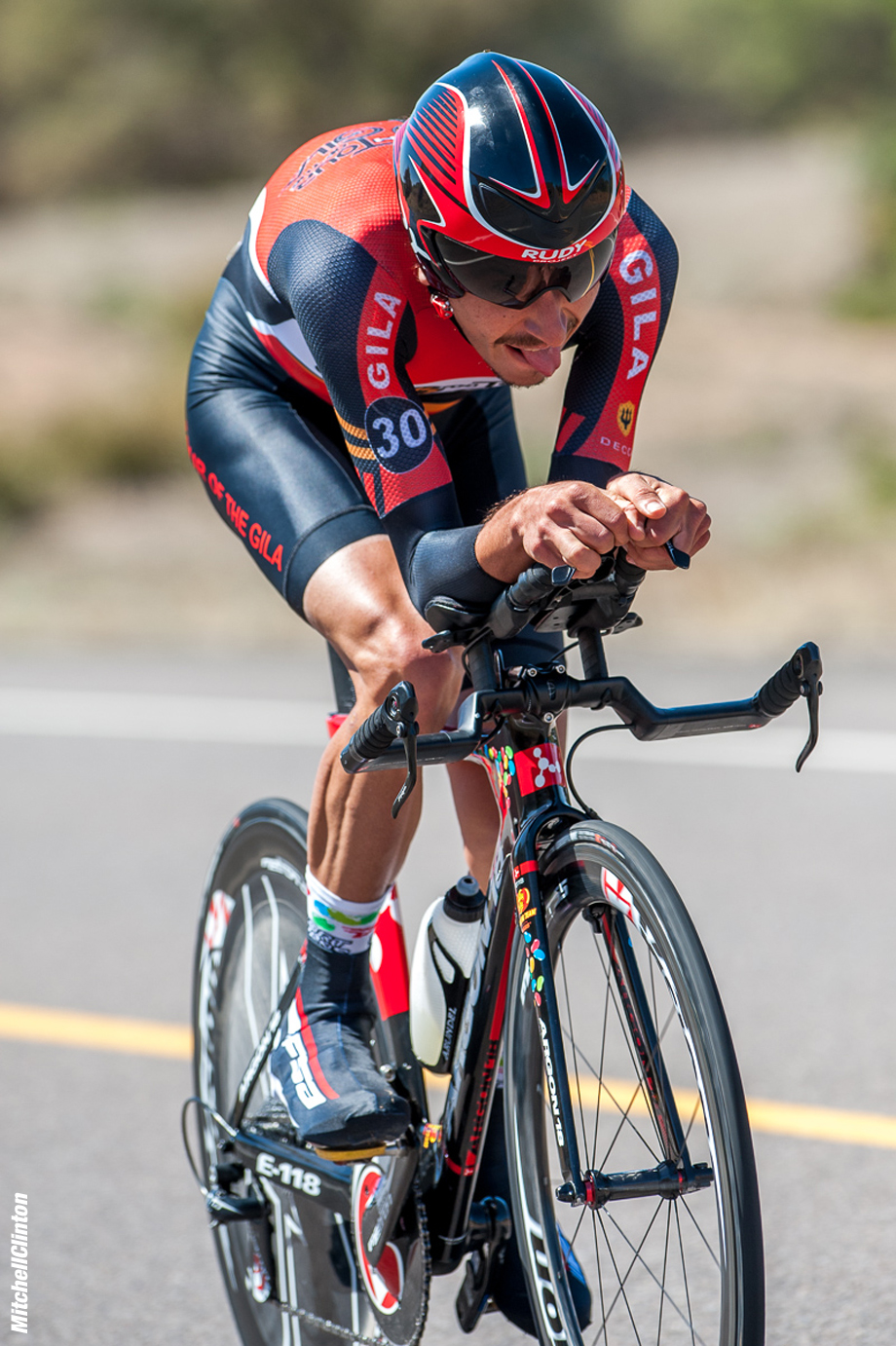 Lachlan dropping the hammer on the TT

When I crept over the finish line of Gila’s “Monster” final stage and saw team leader Lachlan giving his winner’s interview, resplendent in the red jersey all I felt a new kind of happiness. It wasn’t the hair-raising ecstatic rush that I’ve felt after my own rare personal victories. Rather, it was a deep, beaming satisfaction that persists even now, when selfish pride would have long ebbed away. Lachlan’s overall win was all of us together doing what a cycling team is meant to do. There aren’t many better feelings than that.

We will be after more of the same as we take our shot in the big leagues in next week’s Amgen Tour of California. 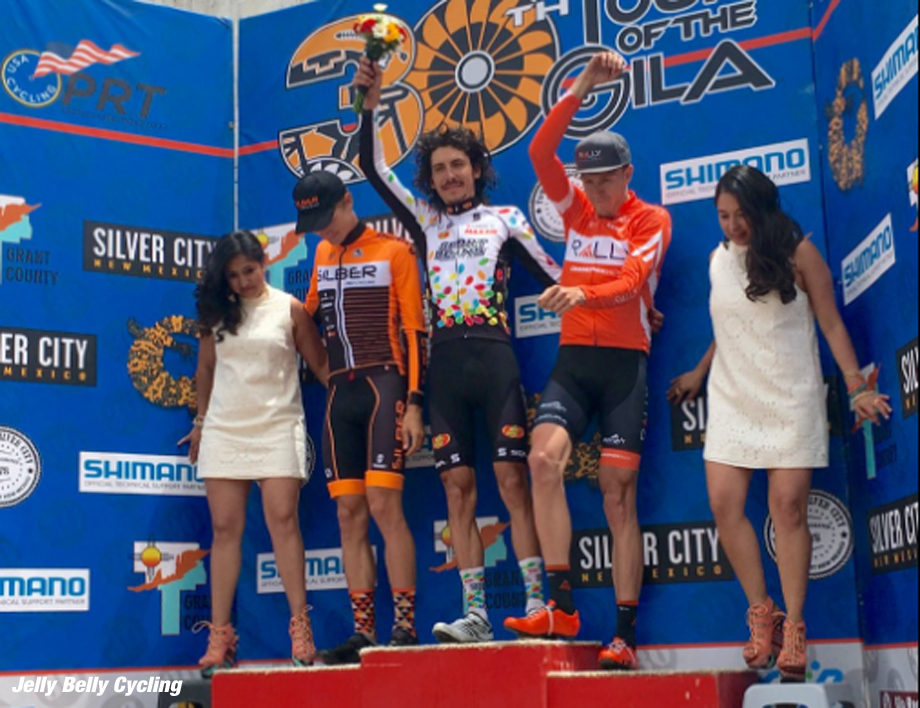