GIRO ’05: Inside The Presentation

The 2005 Giro d’Italia route was unveiled in typical Italian fashion and flair Saturday, and PEZ was there, rubbing shoulders with the extremely well-dressed and well–coiffed crowd. We also scored an invite to the pre-Giro presentation press conference at the Gazzetta Dello Sport Headquarters in Milan. Here’s how it looked…

I was standing in the hallway waiting for the pre-presentation press conference to start when Ivan Basso and Damiano Cunego arrived. The only thing stopping me from getting overly excited at this point was the fact that I didn’t want to get myself kicked out before the interview even started. At the same time I was thinking to myself “Damn, why did I leave my camera back in the journalist’s office?” (I am also now considering getting one of those fancy new camera phones so this will never happen again.) 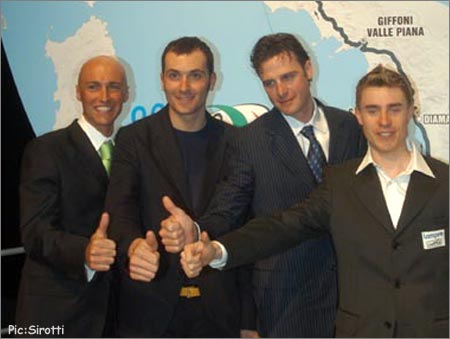 ”That’s it then – we’re forming a new boy band and are going to tour Italy in May.”

In the room we were surrounded by about 15 well-dressed big wigs (including the director of the Gazzetta) and the two riders. I was scribbling down quotes while my wife Lindsay attempted to translate for me what was being said. I must say I wasn’t the only one feeling a little anxious as Cunego was glancing around and looking a bit distracted the whole time while being interviewed by the head honcho. 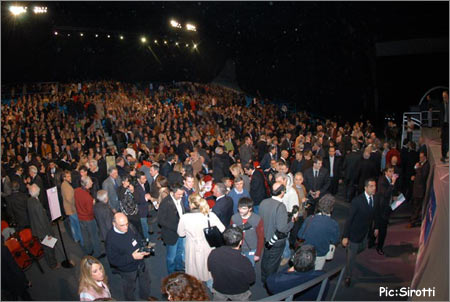 Cunego said he was going to enjoy the stiff competition that the Giro will have to offer this year with the added adversary of Basso, who is looking forward to a double podium in the Giro/Tour this year. When asked if he could win both the Giro and Tour, Basso stated that he could possibly podium both, but is not likely to pull a Pantani and win both, although he is going to try his best to win the Giro. Both riders agreed that the Giro is a more beautiful race than the Tour, even though the Tour holds more merit.

We snuck out of the interview a little early with the man who got us in the invite, Gazzetta writer and good friend Marco Pastonesi. On the way out he told us that these interviews are usually a little more laid back Q&A sessions rather than a press conference led by the editor in chief. That was what I had been expecting, but I admit it felt a bit more like my IBM days sitting in a board room, but hey – how often do you get into the same room with guys like Cunego and Basso – ?

On To The Presentation!
Marco rode off to the train station to pick up a 90 year old Giro veteran, (whose name I did not catch) while Lindsay and I rode off in the opposite direction dodging Vespas and making our way quickly to the Mazda Palace for the presentation. Walking out of the Milan underground we ran straight into Paolo Savoldelli, but it wasn’t until after the presentation that I asked him for his photo when we happened to cross paths again outside the Palace.

We’re not sure what dancing girls had to do with the 2005 route, but we didn’t see anyone complaining…

Once we entered the Palace it was a pretty wild affair with a thousand pushy Italian spectators and a pack of paparazzi down by the stage. The presentation consisted of an introduction of the top riders and podium favorites for this year, the presentation and description of the course map, a few cycling themed dance numbers, some brief interviews with former riders, and Cunego showing off the new team uniform.

After an hour and a half the presentation ended and the media frenzy went back into full swing. We moved our way down from the nose bleed section and I was able to work my way onto the stage once again next to Basso and Cunego…this time I had my camera! I was also pretty excited about brief photo ops with Garzelli and as mentioned before Savoldelli.

The 2005 Giro traverses all of Italy starting in the boot and working its way North. With a prologue TT, two ITT’s, 5 mountain stages, all wrapped within 20 stages the Giro will offer by far the most exciting show of all the grand tours with so many high profile riders such as Basso, Cunego, Garzelli, Salvodelli and hopefully a new young American from the new “disco” squad who missed his chance with Fassa last year….we will see! Look for part II with the local Italian knowledge of former Giro rider Alessandro Pozzi coming Tuesday.

Stay tuned for our full route analysis – we’re working on it now!

Scott Keller is an American living and racing near Como in Northern Italy, and chasing the dream of a pro contract. Talking to Italian racers has proven an excellent way to learn the language. You can reach Scott c/o
[email protected]
Like PEZ? Why not subscribe to our weekly newsletter to receive updates and reminders on what's cool in road cycling?