Dunc Steele was on hand at the 2004 Giro d’Italia Route Presentation on Saturday in Milan, getting the rider reactions you’ll only find on PEZ. Some huge climbing days in the last week should make for a great race…

Sunday, November 8, 2004, Milan Italy: I’m looking at the Giro 04 route and I don’t see much flat, but to me a bridge is a mountain. I turn to Andrea Peron and ask what he thinks. “It’s tough… the toughest in recent years” he answers…so we start talking numbers…

Dates: May 9 – 30, 2004
171 = the average length of each stage for a total of 3435km
23 = the mountains to climb for a total altitude of 18.500meters
2618 = the height of the Passo Gavia (Cima Coppi) on the 18th day of racing
59 = the length of the Time Trail
20 = the bonus seconds given to the winner of each stage
12 seconds for 2nd, 8 seconds for 3rd
3 = the bottles of wine Ivan Quaranta (Formaggi Trentini) sunk while at dinner with Andrea Peron, Giovanni Lombardi, Stefano Giuliani (Formaggi Trentini DS) Marco Bruns (A-Style), lots of nice TV showgirls and yours truly….Duncan Steele, but that is another story!! 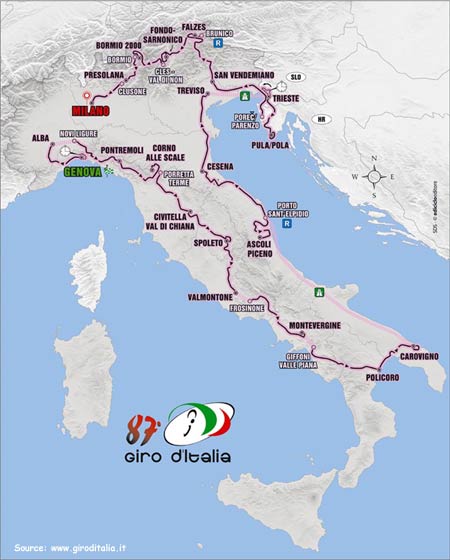 The Giro D’Italia was presented on Saturday afternoon in the very grand Auditorium of Milan. Starting in Genova then skipping down the centre of Italy to Policoro at the bottom of Italy, then up the west coast all the way to Trieste, a visit to the Croatian city of Pola then back into Italy for a final week of fun and games in the Italian Alps with 14 climbs including The Passo Tonale, Passo Gavia, Bormio, Passo del Mortirolo (Hurraaay, this ain’t no bridge!) Passo del Vivione, Passo della Presolana (my fingers are getting tired just writing them!) and then the final stage all down hill to Milan! 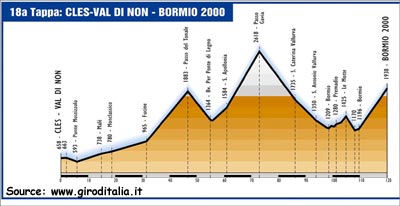 Presentations of this type are very traditional & old hat and to be truthful doesn’t sum up to a very exciting afternoon, so I got some of the usual comments from the riders on the race and then I SLAMMED them with some of MY questions.

WHAT THE RIDERS SAY 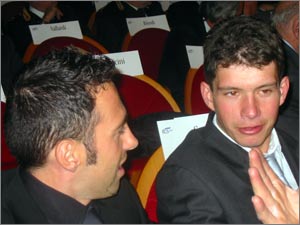 Gilberto Simoni: “It’s a tough Giro, Gavia and Mortirolo will come after near 3000km of racing but I think most will be decided on day of the Mortirolo (19th day, Mortirolo 1835m, Vivione 1827m, finishing on the Presolana 1297m = total km 121.Dunc) but I like the race route. It certainly will make good television! I still believe in doubling up to win both the Giro and Tour but I’ll take one race at the time and I can’t give up the Giro for the Tour. I just hope Armstrong comes to the Giro.” (Like that’s gonna happen… – ed.)

Paolo Savoldelli: “It’s a great Giro, I’m not sure if I’ll be there to ride it, which will be a shame as the 19th stage with the finish on the Presolana is my home territory and the last stage into Milan starts from my home town of Clusone. T-Mobile are getting the team together now but won’t be until February when a decision will be made if I will be riding the Giro or concentrating on the Tour” 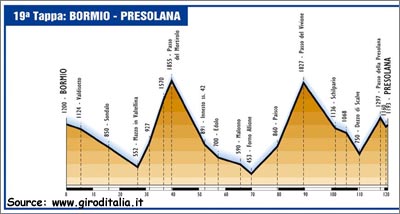 So what does Garzelli think. He wasn’t at the presentation so I scrambled around to get his phone number to phoned him up.
Stefano Garzelli: “Tough isn’t it? I think a telling day will be the 18th on the Gavia (Tonale 1883m, Gavia 2618m, finishing in Bormio 1938m = total kms 120. Dunc) But it’s a Giro for the likes of Simoni, Casagrande without forgetting Popovych.” 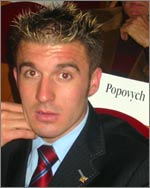 Popovych: “I just hope I can find the same condition as last year, I like the route and a bad day will cost dearly in the last week. Only 59kms time trail will suit all of us, lets see what happens!”

Then the un-paid bill between Petacchi and Cipollini. Cipo is in Eygpt training in the sun, Petacchi is on holiday. Cipollini wants the revenge and has said that last year has given him the motivation to win more this year… and has a few question marks to wipe clean…instead Petacchi after riding the 1st stage from Genova to Alba 149km, that isn’t flat by any means with the Colle di Cadibona 436mtres, then it goes up and down to the finish, said he will prepare his year like the last regardless of who he has to sprint against! The challenge has been set. 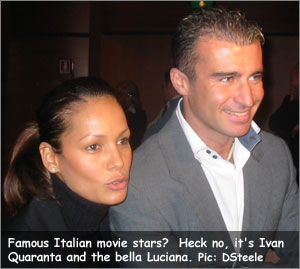 Let’s not forget Ivan Quaranta, he doesn’t like hills or even bridges but get him in the sprint he gave more problems to Cipo than any other rider before Petacchi arrived. Quaranta last year sat out the Giro and Tour for the fact that his team Saeco didn’t select him to ride. This year riding with Formaggi Trentini he will have the opportunity to say his bit in the sprint against Cipo and Petacchi… that’s if he has sobered up and stopped dancing on the tables with his Sporting Director Stefano Giuliani!!

Quaranta: “I was forced to watch last year’s Giro on TV, which hurt. I want the place that I merit, I was used to going elbow to elbow with Cipo. Petacchi will be a new challenge and if I have to be honest I think beating Petacchi will be more difficult than beating Cipo”

This is great, seems like the weigh in from an Ali- Foreman boxing match….lot of jabbering and pride being thrown around……let’s see who gets knocked out!

I hooked up with Gian Carlo Ferretti, Team Manager of Fassa Bortolo. “Looks like there are 8-9 stages that will be decided with a group sprint, which is about right for a great stage race, Petacchi will have his say in all of these stages and I’m sure he won’t be in the same physical condition as last year…..he will be better and stronger!”

Andrea Peron: “Mamma mia it’s tough! I’m not sure if CSC will be riding the race, I certainly won’t be, but I would like to ride it as I think it will be a great race. CSC might put a younger team in for experience and then they will ride the Vuelta aiming for some stage wins with Bartoli but CSC this year want to do serious stuff with Basso in the Tour and I will be riding only the Tour.”

Now, cyclist interviews are fairly mono-tone and say more or less the same thing to the same questions. I realised that this is because the teams are run in that way…and the cyclist is nearly obliged to conform. So I put a few cyclist’s to the test with some of my own NON CONFORMIST questions. 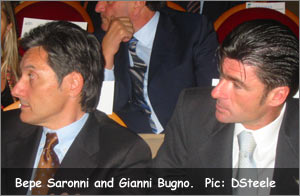 The SLAM-Dunc Round
1. DUNC: Now that Armstrong needs different challenges after winning his 5th TDF and has launched himself in the dangerous challenge of wooing Hollywood (Diva’s or is it singers?)… oh I don’t know I can’t keep up with him… with his Texan charm and humour, So, with which Diva or Singer would you like your name connected with??

Fabio Sacchi (just signed with Fassa Bortolo): I can’t think of anybody… better off on my own… No? (No,Fabio, if I had a choice of spending and evening at home alone or being Fast and Furious with Sandra or friends… I, my friend, will be Fast and Furious and my phone will be switched OFF!)

Ivan Gotti: Monica Bellucci (Sorry Ivan, But she isn’t free, as we are trying to set her up with our Andrea Peron to out-do Lance )

Someone asked me a while ago what is Gotti doing with himself these days. He is working with Mr Ferrero the man that makes Kinder chocolate and yummy NUTELLA. Ferrero is a mad cycling fan. Gotti controls the Products displays in the Supermarkets!! Probably Perons next job with A-style!! Talking of which… someone sent me a question asking if Andrea Peron would prefer a Stage win in the Giro or an A-style with Monica Bellucci!? He answered that he has come so close to winning a stage at the Giro, Tour and Vuelta … so just the chance of getting close to an A-style with Monica Bellucci would make him very happy!!

Ivan Quaranta: All of them!!!!

2. Next question- DUNC: Can you touch your toes without bending your knees and do 10 press ups in 15 secs?

Ivan Gotti: Ha… maybe touch my toes.
Dunc: What do you mean maybe… try!
Ivan Gotti: What now?
Dunc: Yes now!
Ivan Gotti, …. No (got to his ankles!Dunc) press ups are out of the question!

Ivan Quaranta: Yep… but the press ups I don’t know…Ican’t remember the last time I tried to do a press up!

Simoni while on stage in front of the Giro Map.
DUNC: Shouting: Gilberto…here… Gilberto PEZ READERS WANT TO KNOW IF YOU CAN TOUCH YOUR TOES WITHOUT BENDING YOUR KNEES AND DO 10PRESS UPS IN 15 SECS!
Simoni looking confused and not sure if he understood the question, steps forward bends and says…..” EH!?”
I repeat the question
Simoni: Touching my toes yes……..Press up I don’t thinks so!

3. DUNC: Asking riders to identify what they see in the A-style logo:
Sacchi: Very good… I see an A!! (Laughing!)

Gotti: An A
Dunc: Nothing else?
Gotti: No… just a A, Why what is it?
(That’s when Doctor Dunc explained to Gotti about the Birds and the Bees…)

Quaranta: Ha… these are great. I’ve seen it on the traffic lights around Italy-

Quaranta: Giro…great…! Lets go and party… are you coming Dunc… we’re eating at a Japenese then on to a club… come on let’s go!

So we slink out of the Giro Presentation with TV show girls in tow… but that is another story !!! ( Stay tuned for Part 2 later this week!)