After any adventure to cover the great races of our sport, there’s always one story I can’t wait to write – about an experience so amazing, that it must be shared – with as many people as possible. The telling and retelling takes me back to a moment that passed all too quickly, but left an impression that both surprised me by its intensity, and also restored some faith in human nature.

This is one of those stories.

And like these stories seem to go, it has little to do with the Giro itself. Sure, without the Giro this story would never have happened, but the connection ends there. 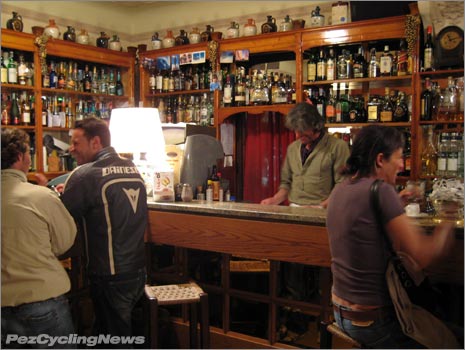 It’s about my new best buddy in Levanto… Marco – the proud proprietor of Barolino – a dispenseria of fine libations without equal. Don’t ask me his last name because I can’t remember. Is he a friend for life? You bet.

Levanto is one of the old towns of the Ligurian coast, its long history forever tied to the sea, where joining the merchant marine was the only ticket out of town for countless generations of young men. Now tourism drives the economy, but the town is full of ancient mariners, and their descendants. Levanto is located 34km into the stage 12 TT corsa, in one of the many rugged valleys that descend from the coastal mountains straight to the sea, and have served over the centuries both to protect and isolate its people. 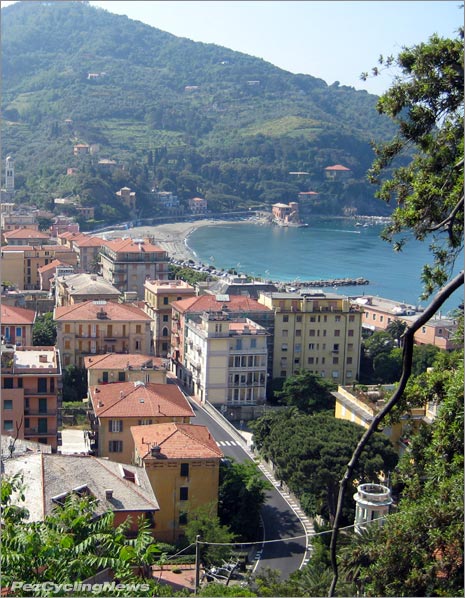 Before the highway access of today, the railway was the only land-based connection with the rest of the land. But sometime in the early part of the last century, the railway came – blasted and drilled tunnel by tunnel along the coast. Levanto sits on a gorgeous natural beach, but the railway access required building a wall of dirt upon which to place the tracks – and this ironically cut the low city streets off from it’s very lifeblood. 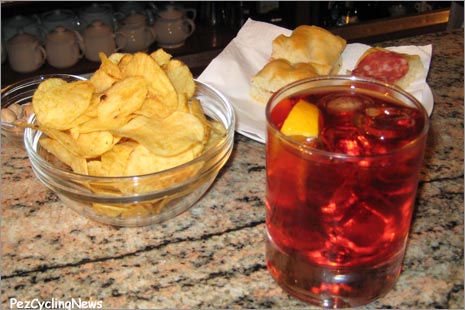 Like pretty much all of my best stories, this one starts with my favorite Italian cocktail – the Negroni.

The railway was long been moved, but not the wall – it’s now a parking lot for the beach. But it’s strange to walk the town streets, not 50 meters from the sea, yet not actually seeing it.

I don’t know how much this has affected life here, and the attitude of the people. But the locals I met were resoundingly happy, and friendly – this ain’t no big city. Sure, there are the old timers, suspicious of anything different, but this town now thrives on tourism, and the folks here know what a difference a smile can make. 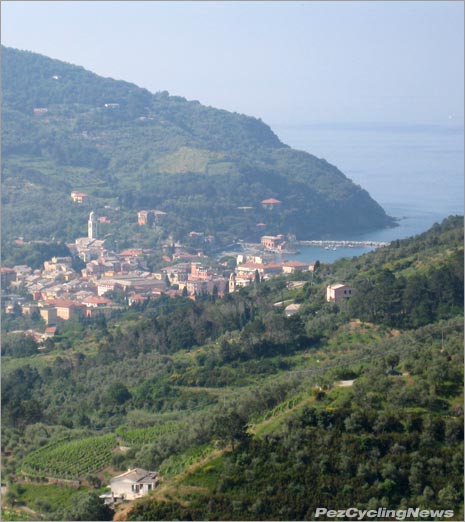 My first night in Levanto started as usual – with my daily search for a negroni. But this was Monday and most places were closed, it was getting late and after inhaling much exhaust on the clogged drive from Genoa, I had little energy for a full exploration of the town. I saw an open bar, stuck in my head and was impressed with the vast (for a small Italian town) selection of libations, spirits, and other boozes. Save for one old timer, I was the only customer, and sat down to promptly order a negroni from the young barman.

Dimitri (I’d later find out he’s just 16 years old) deferred my order to a sturdy and fit looking man with long grayed hair, with a strong and handsome face, weathered and bronzed by 43 years of Ligurian sun. His build was lean and fit, and he could have been a ciclisto.

This guy was cool. Not because he tried to be, like Cipolini, or countless Milanese poseurs… He was cool because that’s just how he was. No effort to be anything but himself. He spoke with a booming voice, that rang with the exhuberance of a guy who really is happy with his life.

My apertivo was prepared with a casual experience of having done this hundreds of thousands of times. We talked a little about the Giro, the bar and cocktails, and as I left for dinner, I vowed to return. 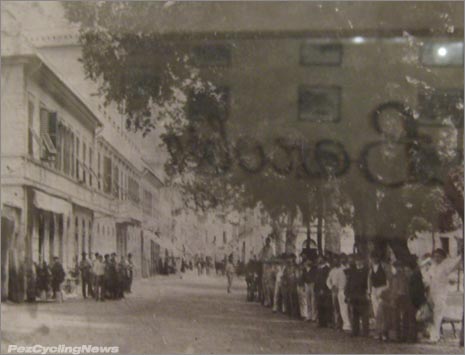 So about 10:30 that same night, walking past the bar on my way home I saw the shutters closed and could see the clean up inside in progress. I stuck my head in and there was Marco mopping the floors, getting ready to close.

Normally I wouldn’t impose, but I sensed that asking the question of a night cap would be easily preferred over his current task. Marco welcomed me in and at my request for a limoncello, he pretty much dove into his deep freeze behind the bar, and after a few seconds of purposeful rummaging, produced a frozen glass, and a chilled bottle of his locally made digestivo.

He proceeded to fill the glass to the rim – which indicated to me he was in about as big a hurry as I was. So we spent the next hour discussing whatever came up, and whatever my limited Italian and his non-existent English would allow. This, it should be noted, did little to deter the conversation. 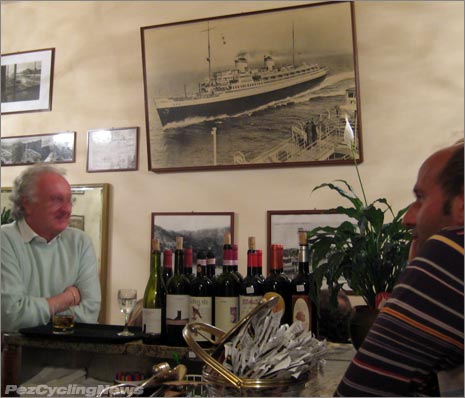 “Barolino” was his dad’s bar before him, but he’s worked here for 26 years. (The business card says it’s been here since 1921.) And like many of the town’s men, his dad was a mariner before this. Marco and I are about the same age, and he’s married with an 11 year old son.

This is the thing about a great barman, nay – a great man of any occupation – the complete lack of bs. I stumbled out of there an hour later, happy in the fact that I was in town for 2 more nights, and I’d found “my” bar.

I’d have stopped in the next night, but he was closed – his on day a week of ‘rest’.

On my final night, after a fine meal with some other locals, there was no way I’d miss my last drinks in Levanto at Marco’s bar. Wednesday night at 10:45 was decidedly more lively. His outside seating was full, as were many of the tables inside.

My appearance in his doorway was met with cheerful and robust greeting and welcome – arms were extended and hands shaken across the granite bar top.
I saddled into the last open bar stool, and began another round of good times, Barolino-style. 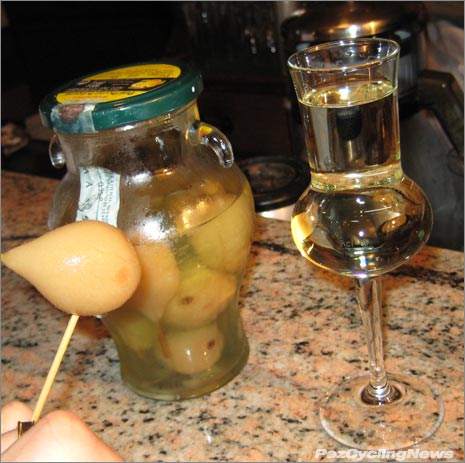 It was after midnight when I used what little common sense I had left to get to bed and hopefully avoid a heavy head the next day’s early start.

When I extended my hand to say goodbye, I was rebuffed. Instead, Marco strode out from behind his bar, walked to me and extended both arms wide.

“Reechard, we are friends now”… he said in Italian. Then came a bro-hug for the ages – the kind reserved only for your best buds, the guys you’ve known forever and will always be your friends. 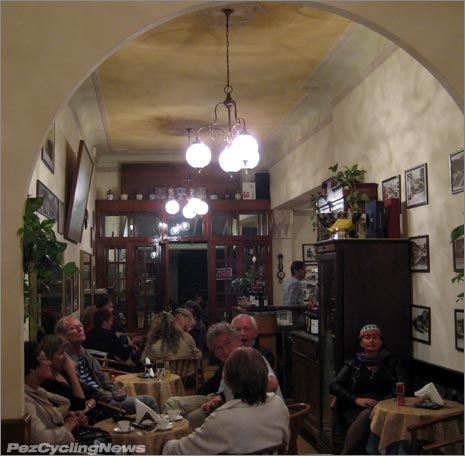 That was a pretty cool moment. In the course of a couple hours over 2 days, I’d come to know a complete stranger, with a feeling of genuineness and emotion that we just don’t have in North America. I know Marco doesn’t go around bro-hugging all the guys in his bar, and neither do I – but they do things differently in Italy, and being open to the ways of another culture has allowed me to see parts of life I’d never experience otherwise.

As I walked back to my hotel, I was surprised by the emotion I felt – I was truly sad to be leaving. I had no idea when – or if, I’d ever see Marco again, and I thought about how different our worlds are. Mine is filled with technology, I come from the relative riches of North America, he’s lived in the same small town for most of his life and worked in the same bar for more than half of it. 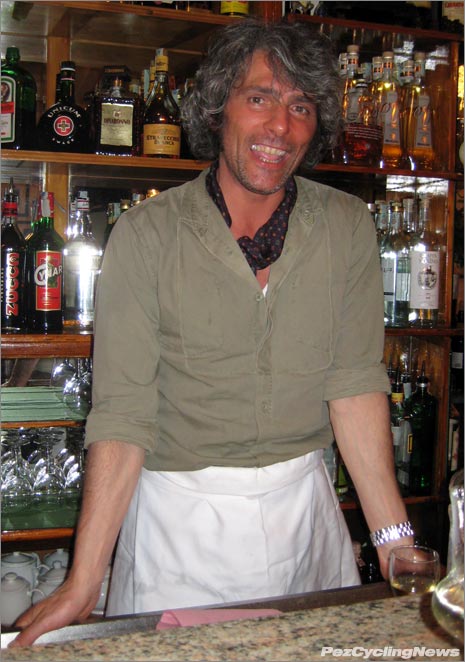 Marco – many thanks my friend!

I use the internet to make connections with people around the world – thousands of you each day. Marco’s connections are made around his bar, one person at a time.

I’ve seen that as I’ve grown into my later 40’s, started a family and dug into earning a living, that the good ol’ days of making new friends have all but disappeared. I just don’t meet new ‘friends’ anymore. Not because I don’t want to, or don’t enjoy the chance, but because my life is filled with 3 things (family, work, riding), and that leaves little time for activities or places where I’d meet new people, and actually have time to cultivate a friendship.

I can’t help but think the negroni, limoncello and grappa had something to do with it, but so what. If that’s all it takes to break down some inhibitions, cross a couple language barriers, and make some new friends, then I’m buyin’…