PEZ ROADSIDE Giro’13 St.5: Back in 2013, ‘The Pez’ Richard Pestes was in Pisticci, for a lot longer than he planned, due to the maze-like layout of old Italian towns. Here’s the story: “Sempre Dritto” – ‘always forward’ makes a good translation. When used correctly, it’s a sign of confidence, direction, and success, but these same watchwords can also lead you to places you never expected. 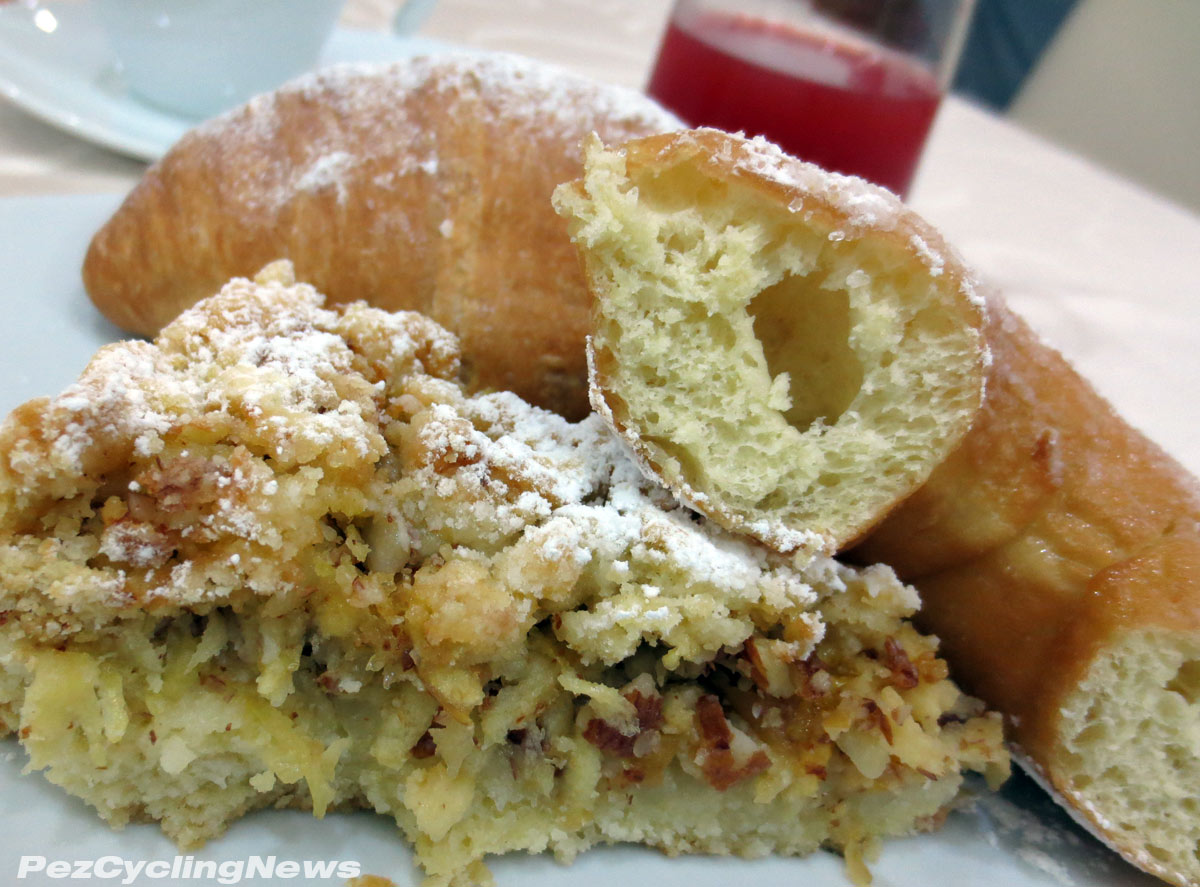 Interesting Fact About Mino #38 – He doesn’t eat lunch.
Day after day my ‘pilota’ Mino continues to amaze me as I get to know the man behind the wheel. I’ve already called us an “unstoppable force”, and seen Mino take care of things that would make Harvey Keitel’s character in Pulp Fiction envious, and I’ve marveled at how he keeps going hour after hour on these long days with not so much as a mid-day snack. I can make it till about 4:00PM before crashing hard – but he just rolls on through to dinner – which came as late as 10:30 one night. Then I noticed his breakfast ritual – which consists simply of a cappuccino and three croissants, followed by another cappuccino and three more croissants. Boom. Done. He’s set for 12 hours. I’ve no idea how he does it, but it works for him.

For his part, he’s been rolling his eyes whenever I grab a slice of pizza for lunch – he’s baffled at why I eat so much. No matter, he seems to be the perfect Tonto for my Lone Ranger – which of course makes him an excellent travel partner. 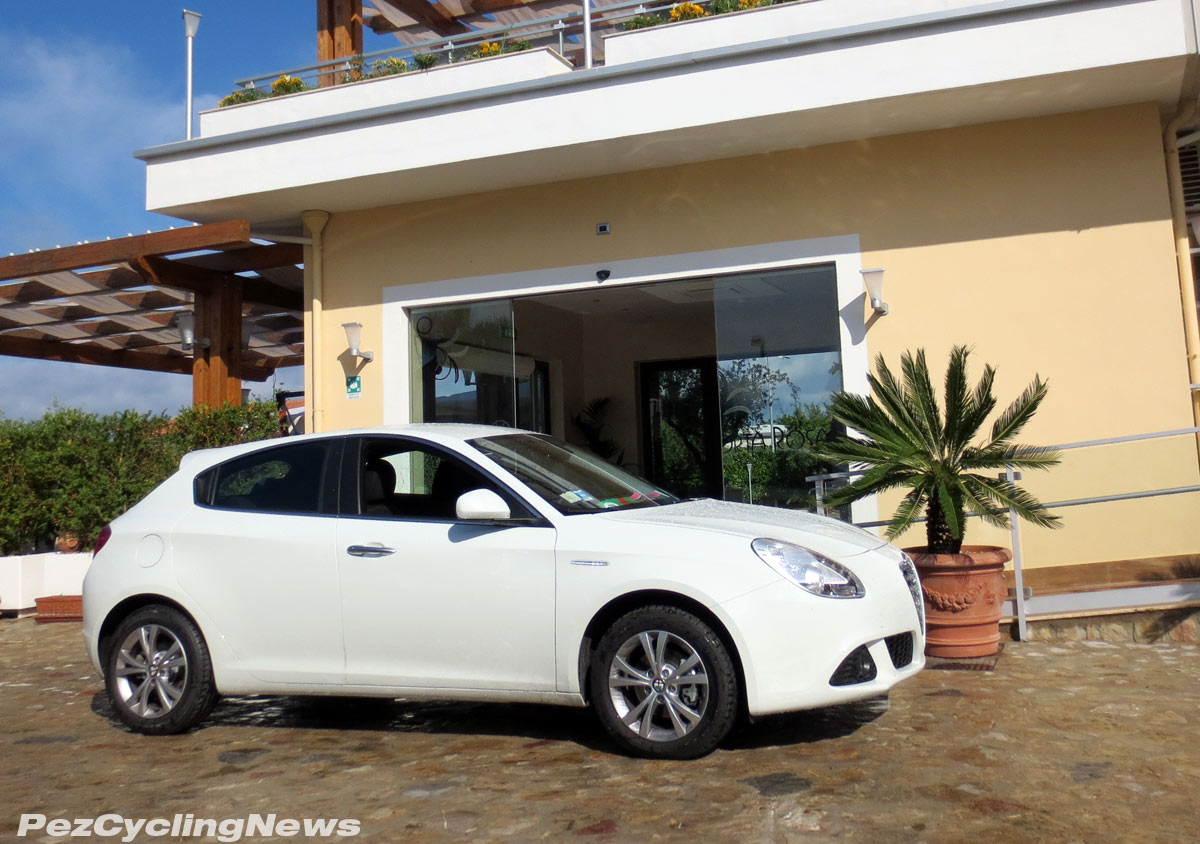 When in Italy – why not drive an Italian car? The Alfa Romeo Giulia was proving a worthy ride, and even more so today.

Now to today’s story, which is actually about an unexpected adventure we had yesterday. After the day’s start in Policastro Bussentino, our plan was to aim the car due east and not stop until we hit today’s finish town of Matera. I’d calculated this to save us anywhere from 3-6 hours of car time that would be better used for writing my report, catching up on some work, and maybe even getting a negroni before dinner. 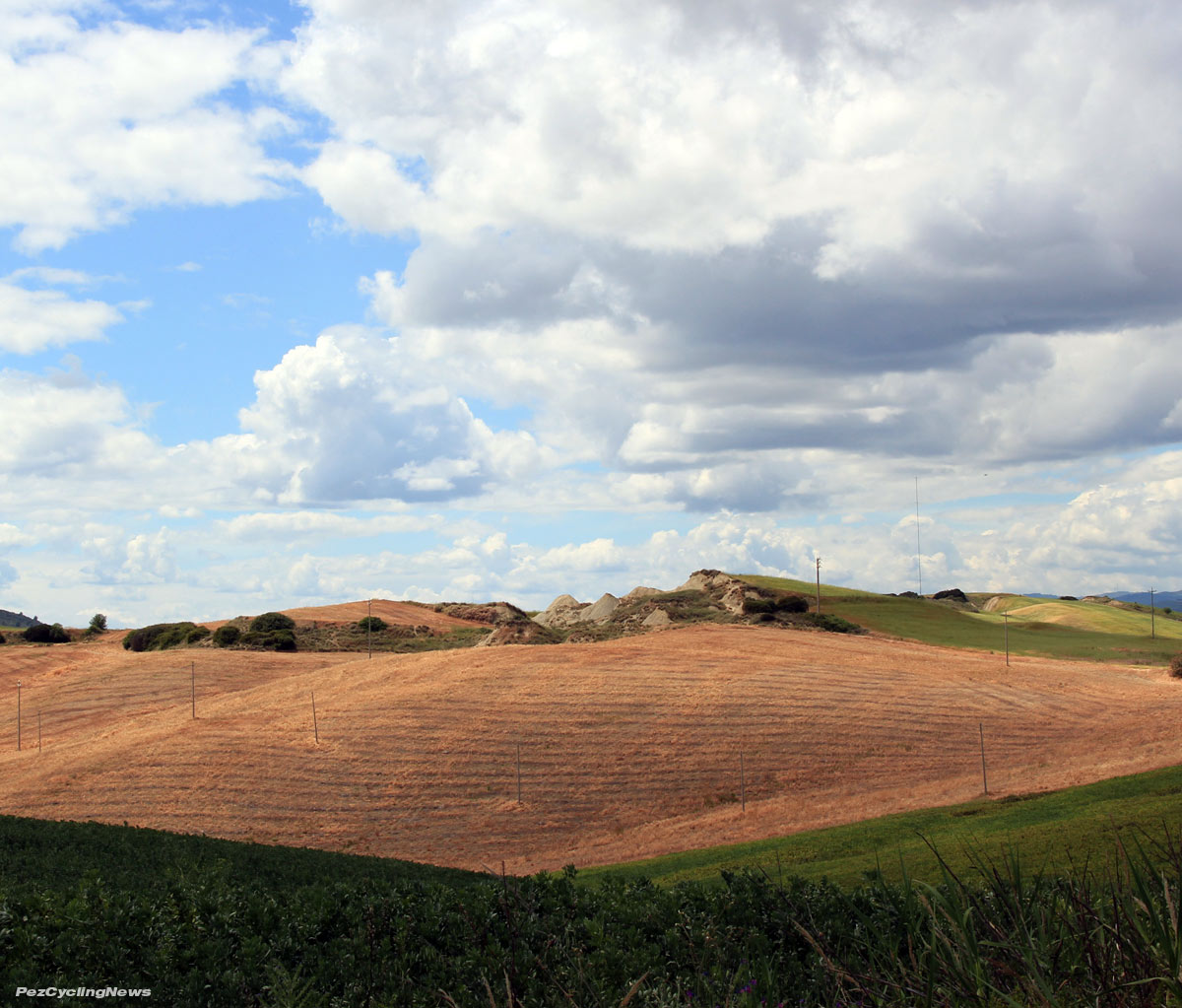 When it comes to hand held devices, Mino is somewhat old school – he’s Nokia (while I’m Iphone). So we’ve been running dueling GPS devices, with both offering sometimes completely different route suggestions. I’ve noticed the Nokia has a habit of taking us on obscure routes, sometimes off course, and even just plain giving us the wrong location of a destination. 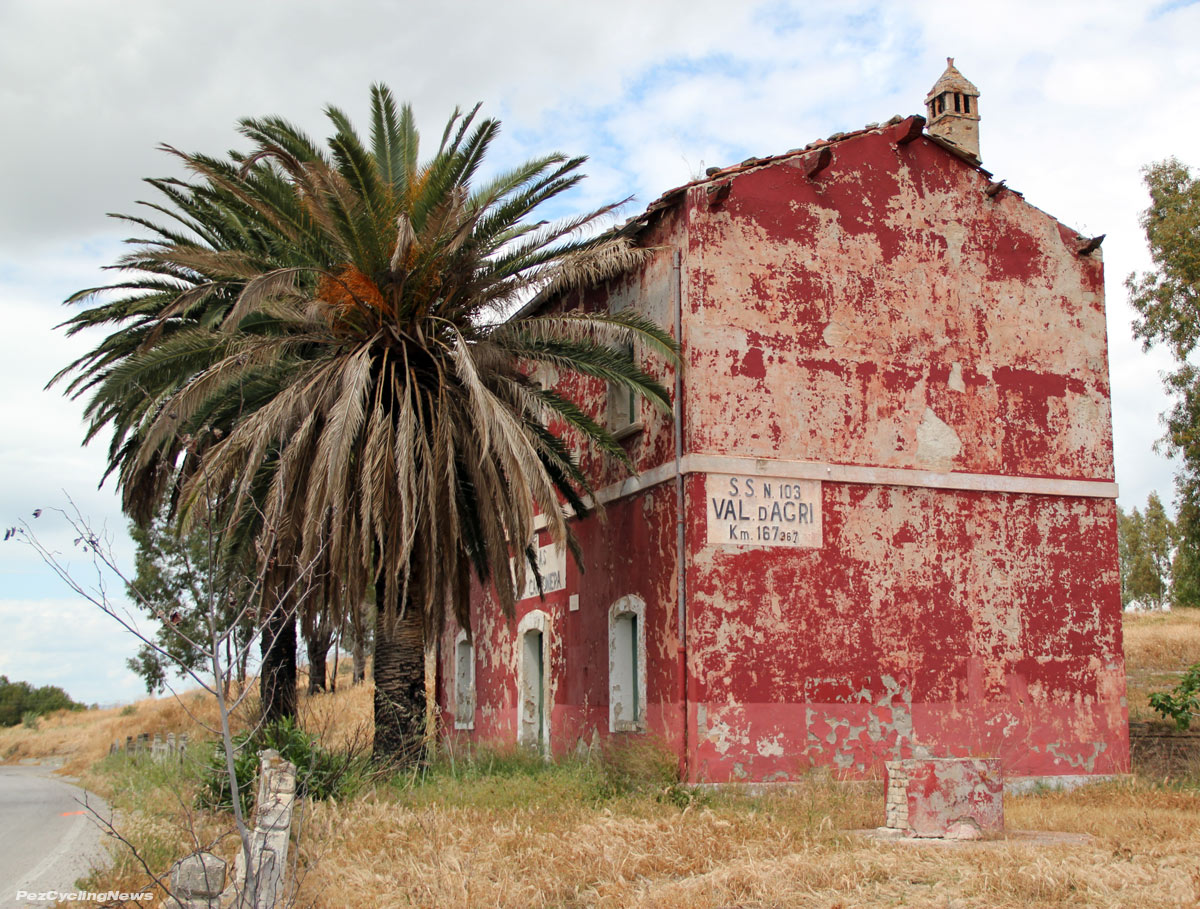 Matera sits in the middle of the foot – sort of below the ankle, and is one of those places that you can’t really get to from here. Relying on our electronic devices, we had several routes to choose from, but seeing as my driver is my driver, I’d deferred to Mino’s Nokia (old school), even though it’s already given us some bad advice, and contrasts constantly with my Iphone. 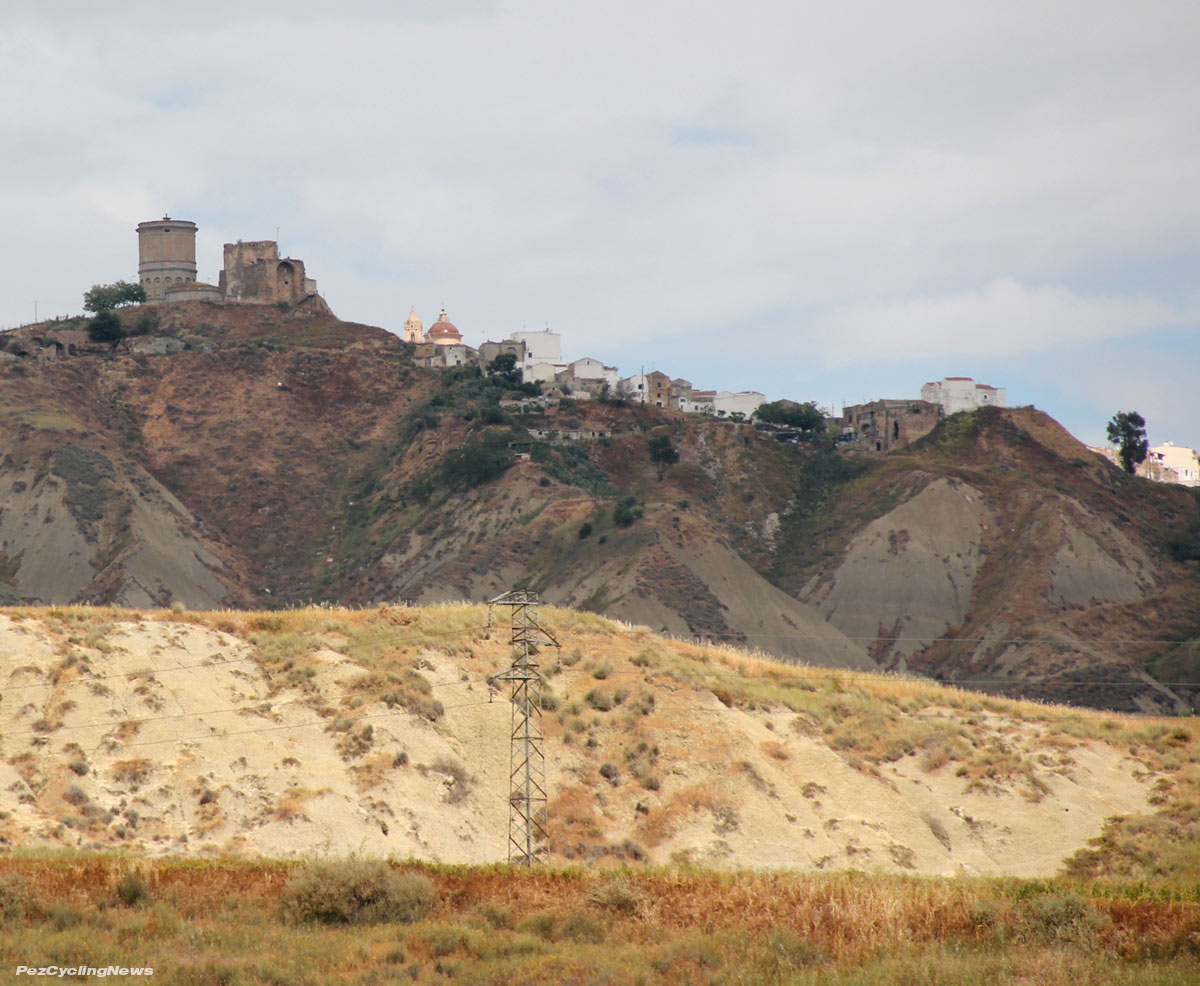 We left the lush forests of the coast behind and found a much different landscape as we passed the mountains that isolate the central south from the rest of the country.

The countryside down here is desolute – it’s dry, hot, there’s just not much rain – and not much grows here. It reminds me of the American west – and I’m sure they shot many a spaghetti-western here in the ‘60’s.

But we made some good time – targeting a 2:30 arrival in Matera. The Nokia had performed well today, and we bombed along an empty tiny country road past abandoned farms and the occasional olive grove. 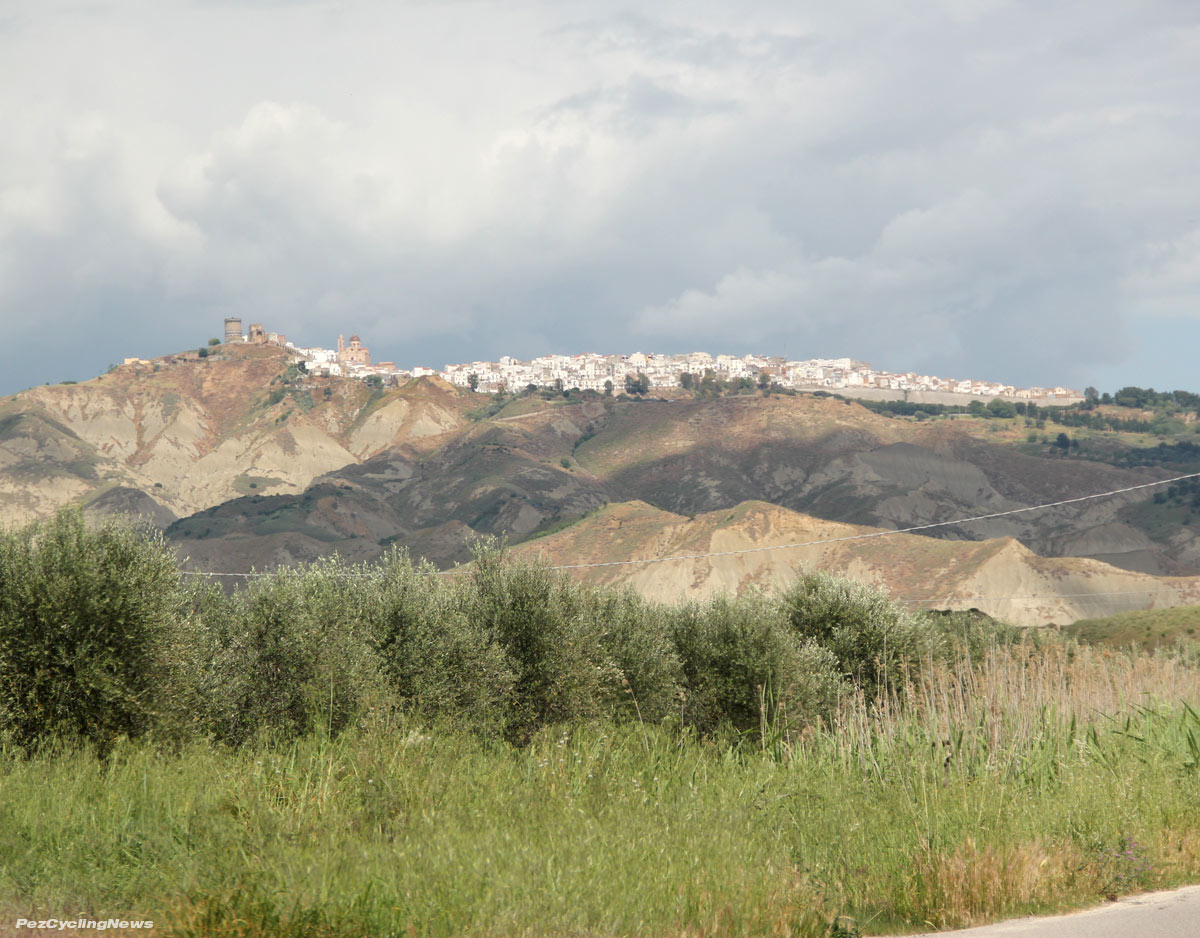 In the distance I could see the hill top town of Pisticci – sitting majestically above the lowlands and while it was obviously of medieval origins, it looked to be thriving in the modern world. That would be nice to see sometime, I thought. 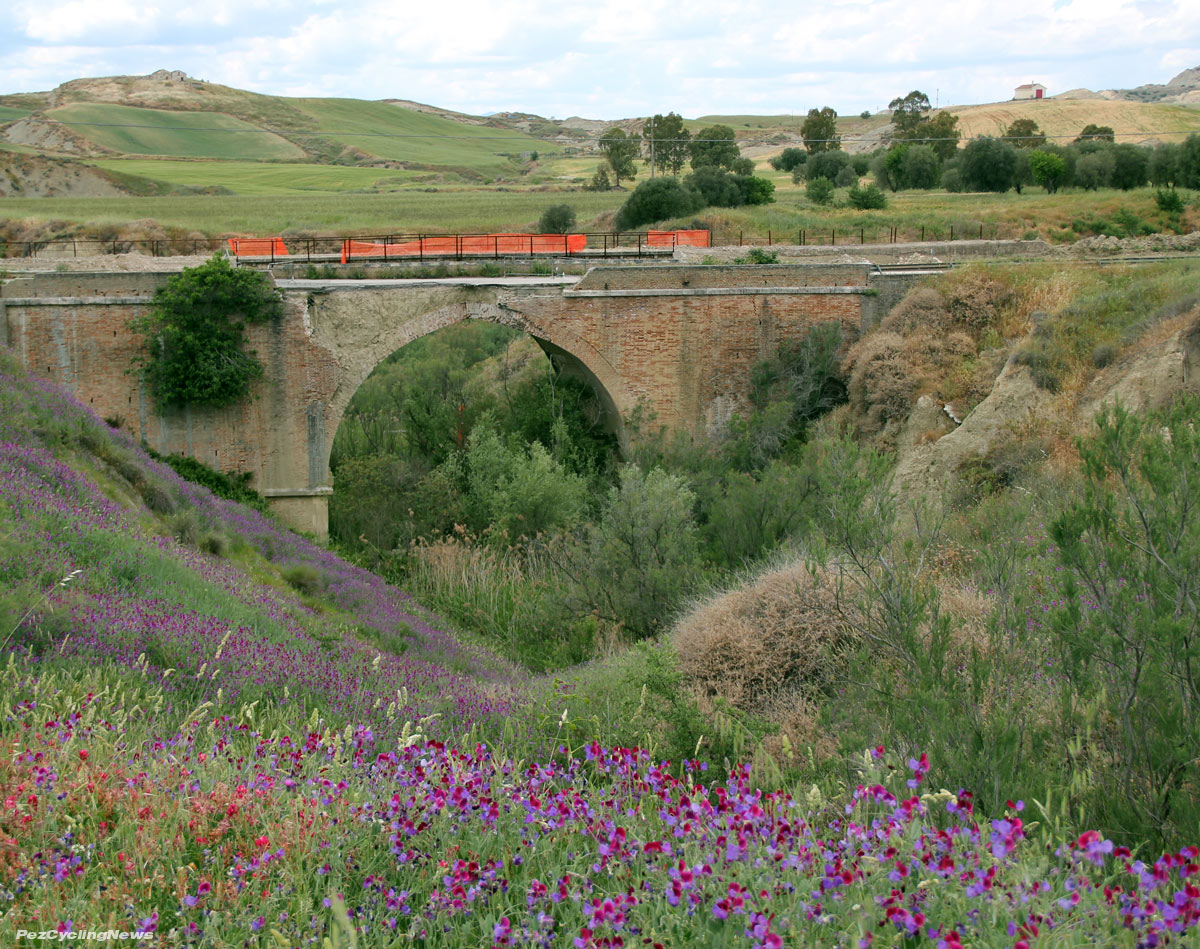 And just when I started to look forward to having my story done before negroni time, Mino jammed on the brakes and almost skidded to a stop. The road was blocked ahead – a bridge was out of commission and there was no way past it.

I asked Mino what he thought?

“Sempre dritto” was his reply. He wheeled the car left and onto a tiny dirt track I hadn’t even seen. It appears this bridge has been out for some time, and also appears it’s going to be some more time before it’s fixed. Maybe that’s why hadn’t seen another car since we’d left the main highway many kms back. 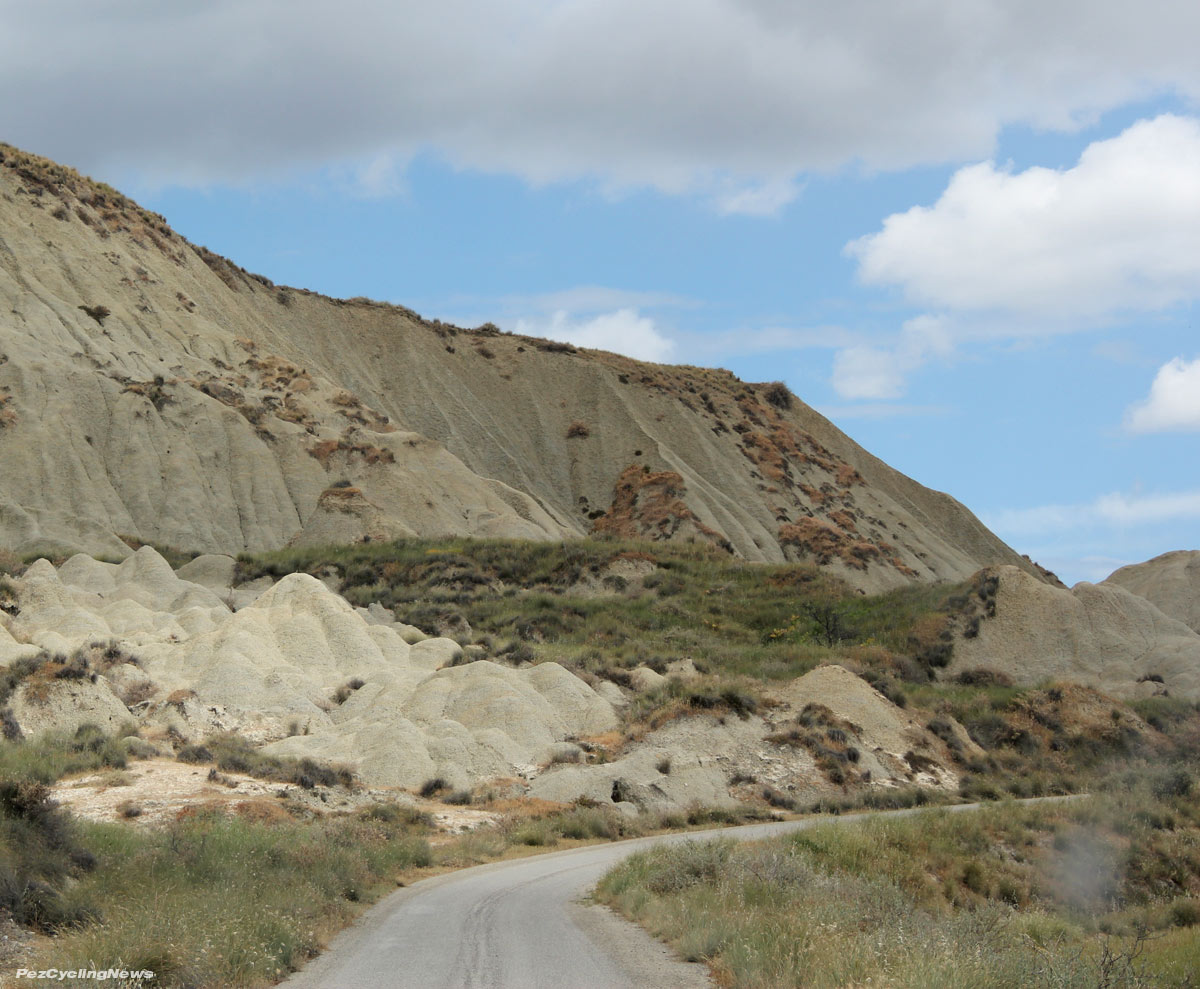 Now, I’m all up for pressing on and all that – sometimes you just gotta drive “into the smoke” to see what’s on the other side. But I was having my doubts as the track meandered in the opposite direction we needed, and was so rough that our speed was down to 20km/h. Thankfully Mino was treating my rental car with full respect – no need for unneeded repair bills later. 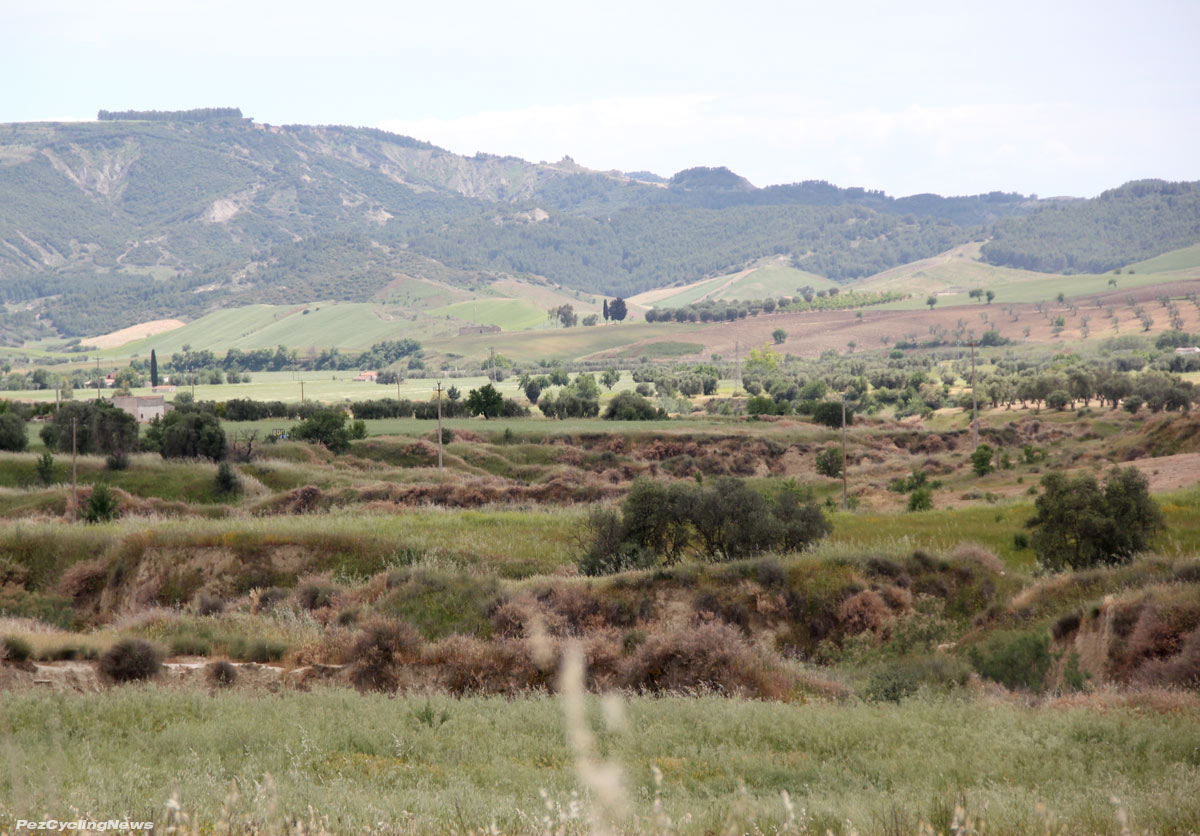 The jagged geography here is emphasized by a craggy river bed that runs with no particular direction across the land except to cut a wide enough swath that it renders a huge chunk of land unusable.

Another thing I’ve appreciated about my driver is his complete willingness to ask for directions – so when we finally spotted an oncoming car, Mino didn’t hesitate to flag him down. “The turn for Pisticci is just up head” he said. 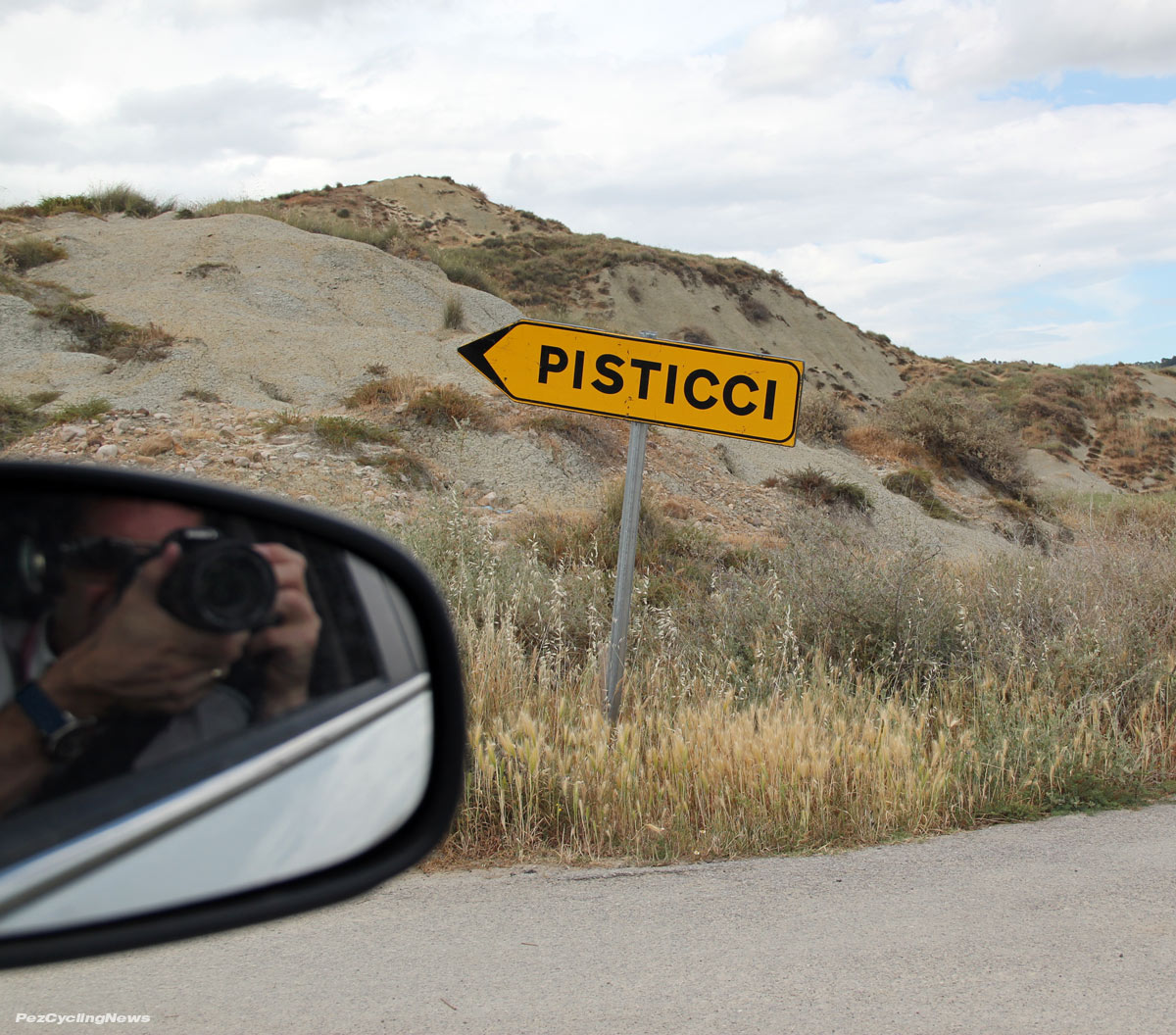 By now we’d lost a good half hour, and still ahead was a climb to the hilltown top, and descent off the other side to get us back on track. But like any good adventure – I could see the smoke was starting to clear. At least we’d get a look at the ancient town – maybe even grab a coffee in the town square.

Onwards we drove – the road suddenly became paved (but only in in places) and we could now see that we’d eventually make it to the town gates – although some 20% grades need to be scaled first. 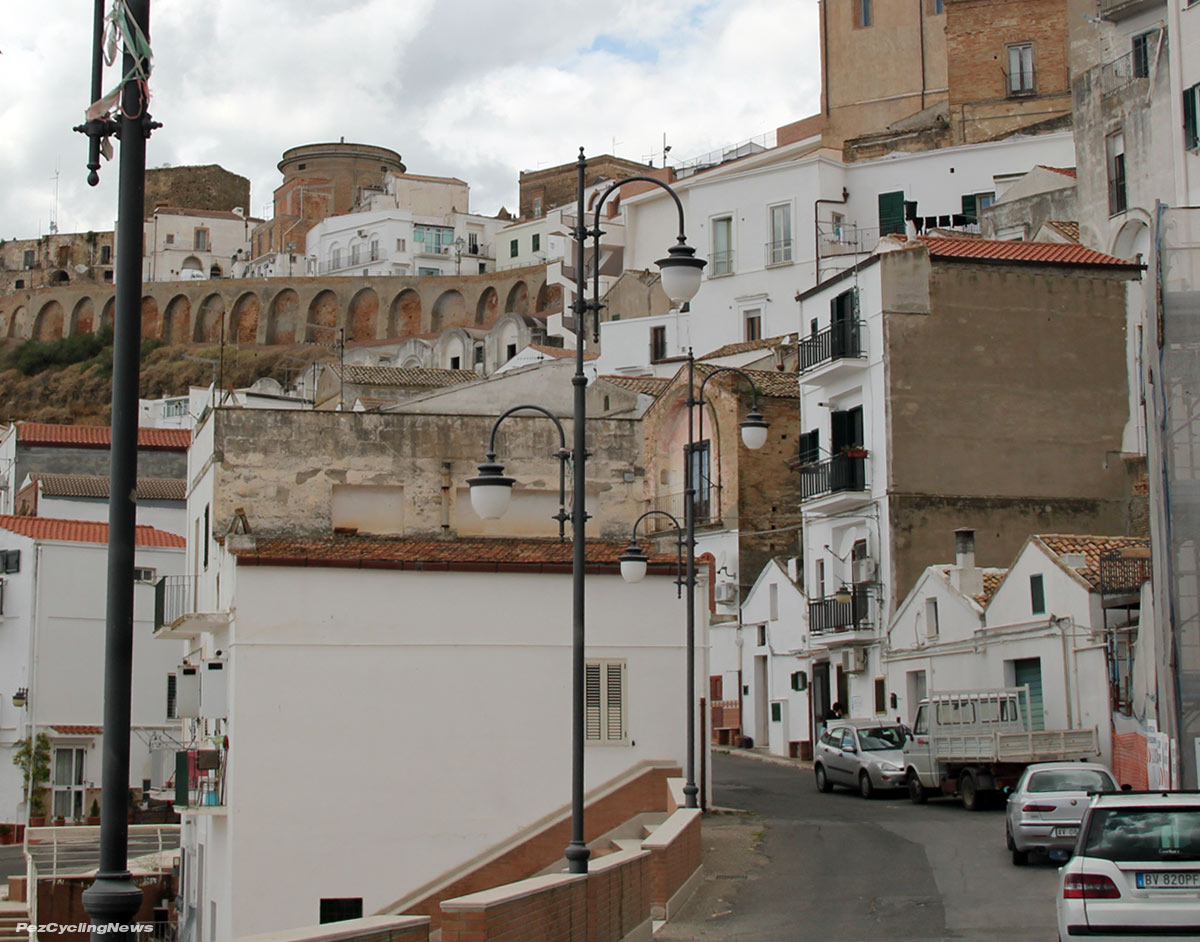 This is not the road anyone uses anymore, but it did lead us to the lower part of the town. Of course our directional choices have sometimes not been the best and we opted for a straight-in approach (versus following the signs). The road narrowed. Then narrowed again. 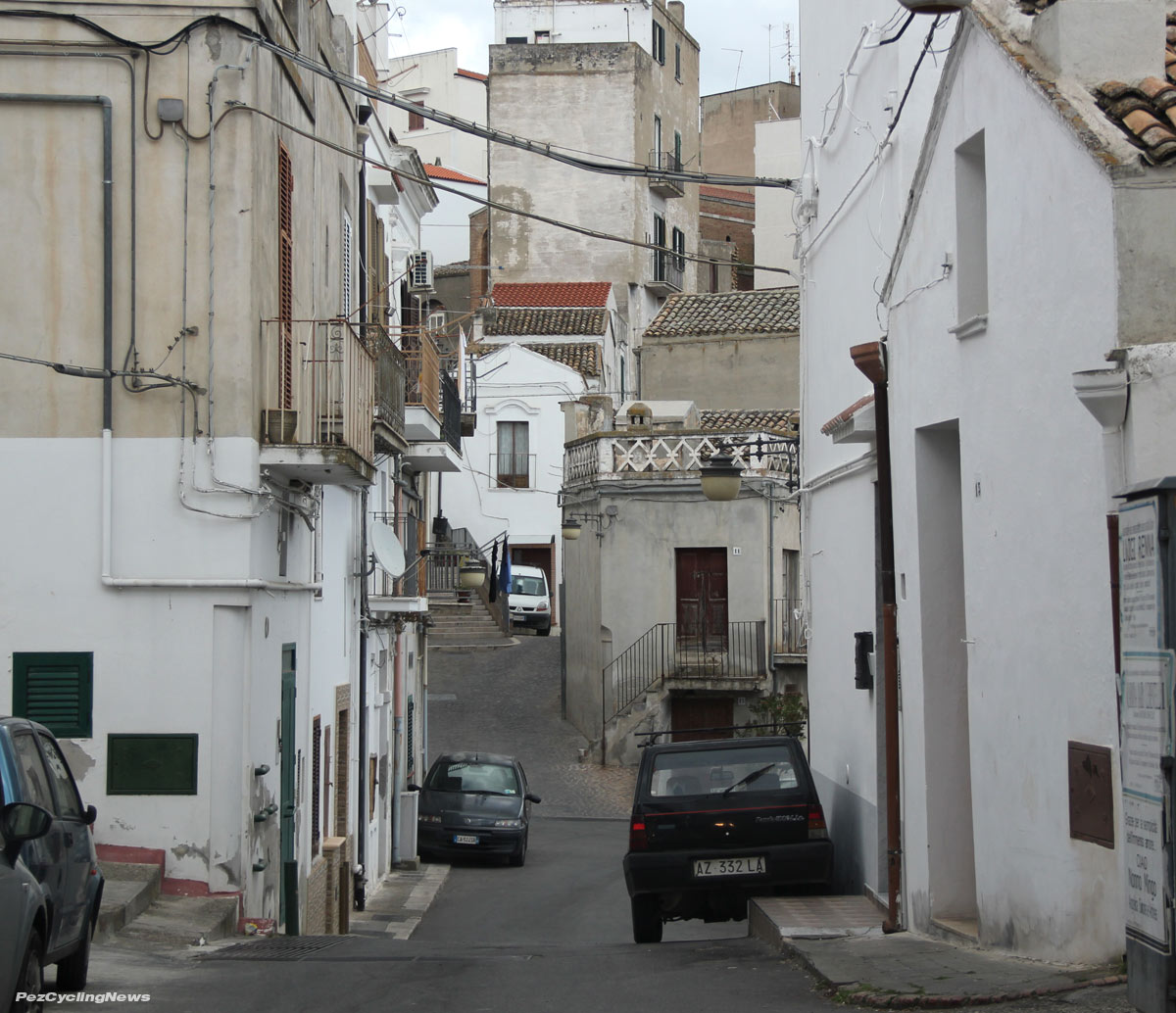 A turn that would have been a switchback if it had enough room to turn around resulted in our first stop-back-up-go-forward-repeat that would fill our navigational log for the next 45 mins. 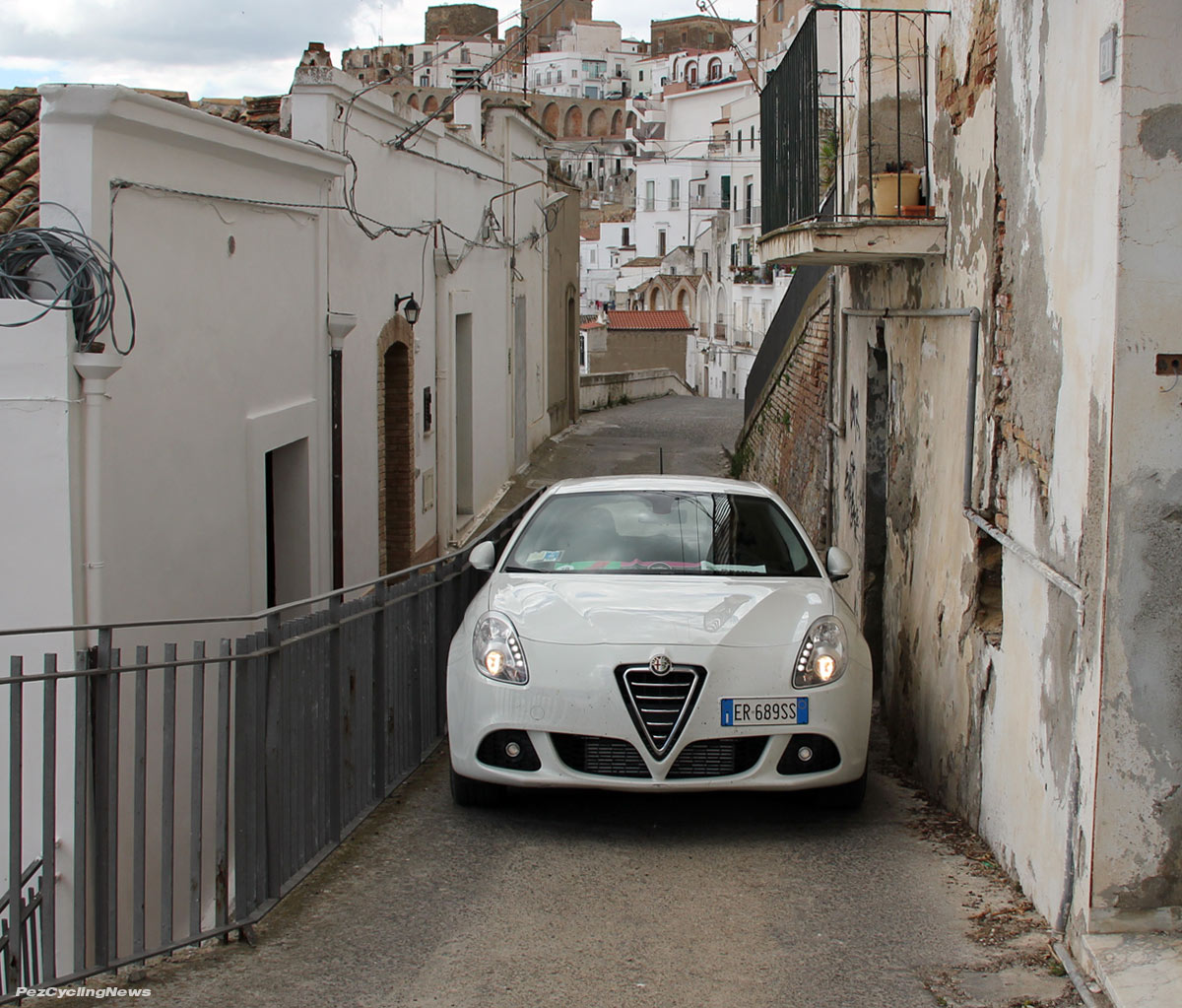 Turning around was out of the question – and neither of us even suggested it – onwards! The road turned into what would be a narrow sidewalk in other parts of the world – but we wagered we could fit the Alfa Romeo Giulia through, but this time I hopped out to guide Mino from in front.

Inches to spare, but we’d done it. That was the skinniest street I’ve ever fit a car through. Then we slotted through another tight corner and the walls closed in again. And again I was out in front watching both fenders as Mino slipped through the even skinnier slot. 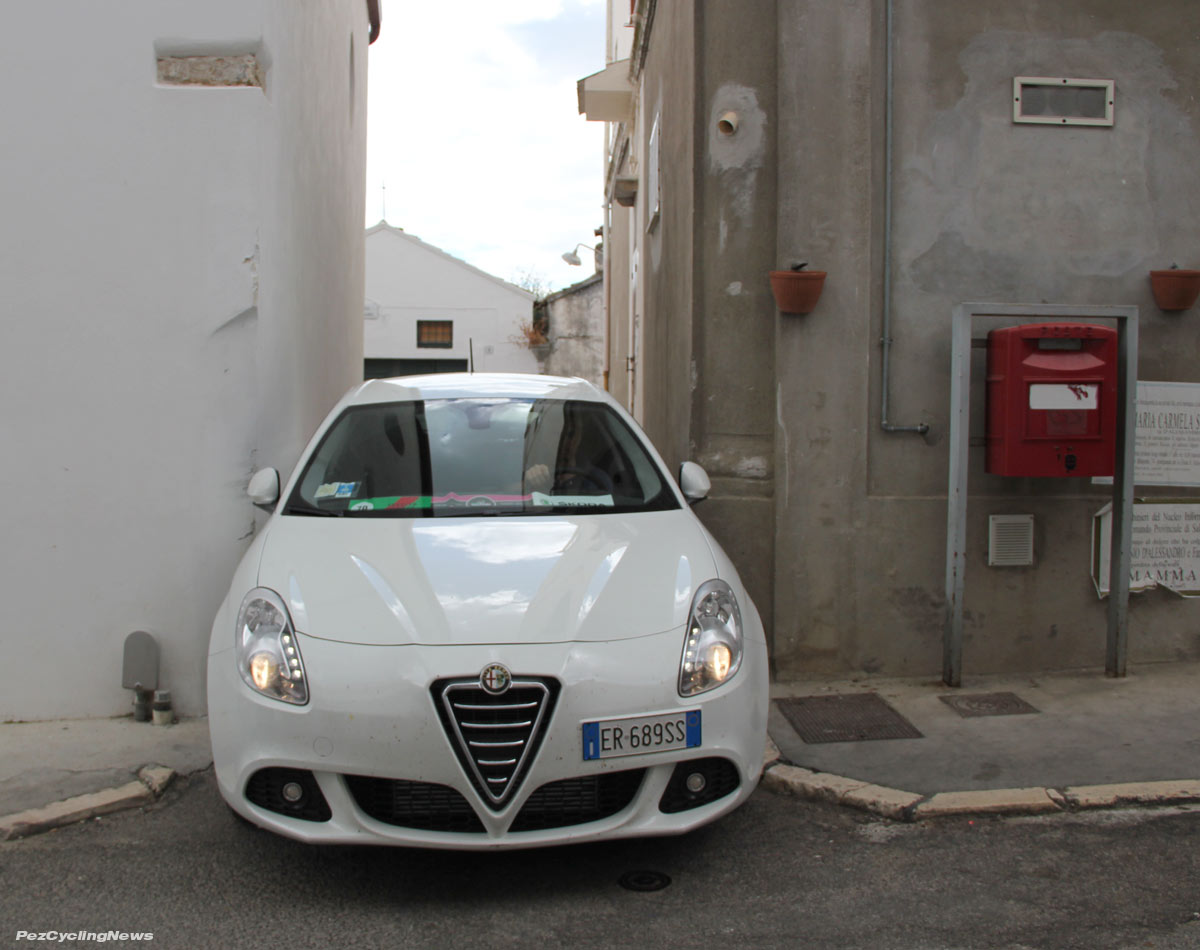 It was midday and the town was deserted – a good thing since there’s no room for our car AND pedestrians here.

I should also mention that by now even my extremely chilled driver was starting to get ’nervosa’. I couldn’t blame him – but as the trip threw up each new obstacle to block our progress, we’d triumph. Keep going! I want to see what’s at that church perched way at the top of the hill… 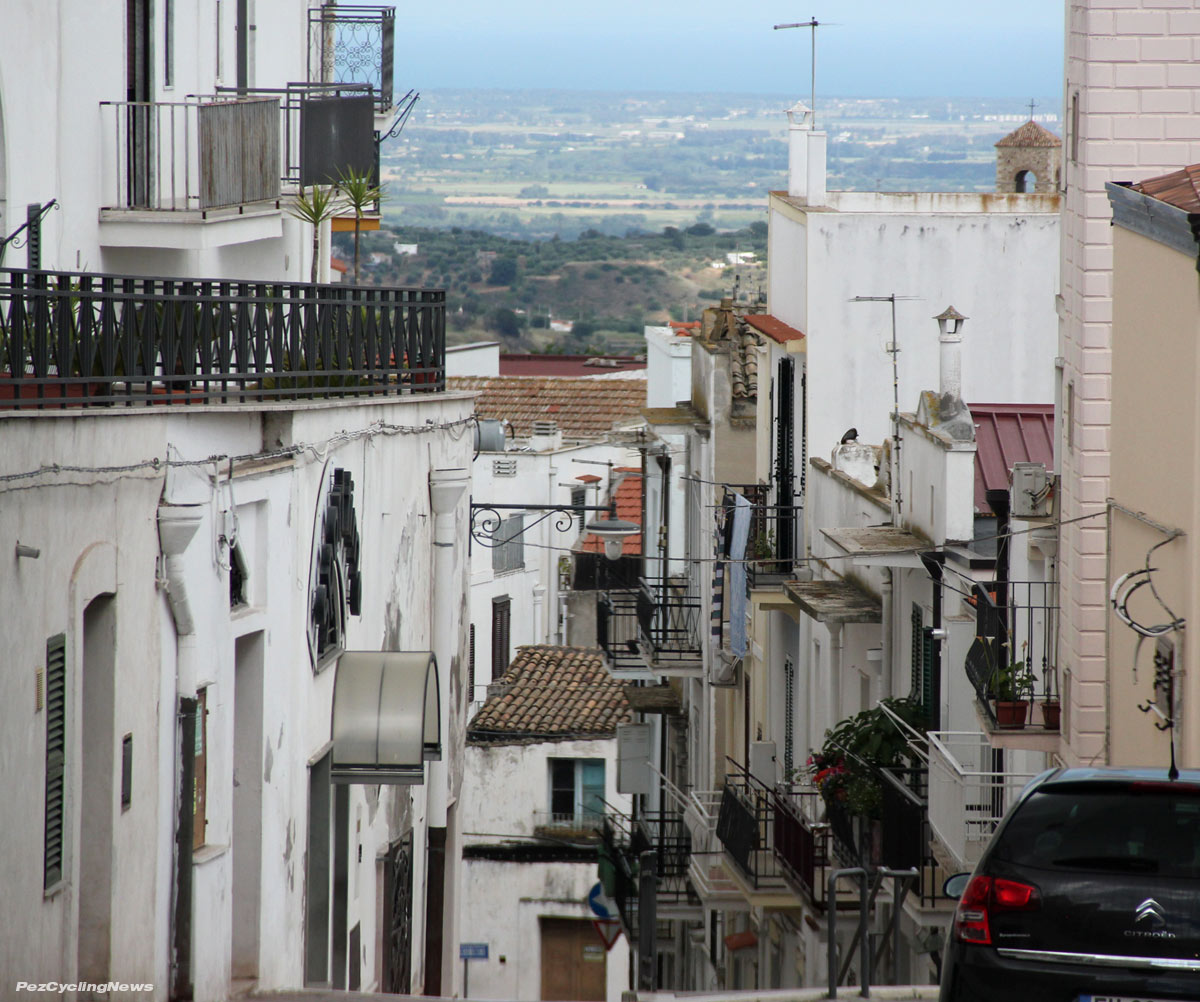 Up, down back and forth we drove – more directions were requested and signs not followed, then followed. Then we made it – up an incredibly steep slope (I’m sure it was over 20% this time) and bop – we popped out at the highest point of the town. 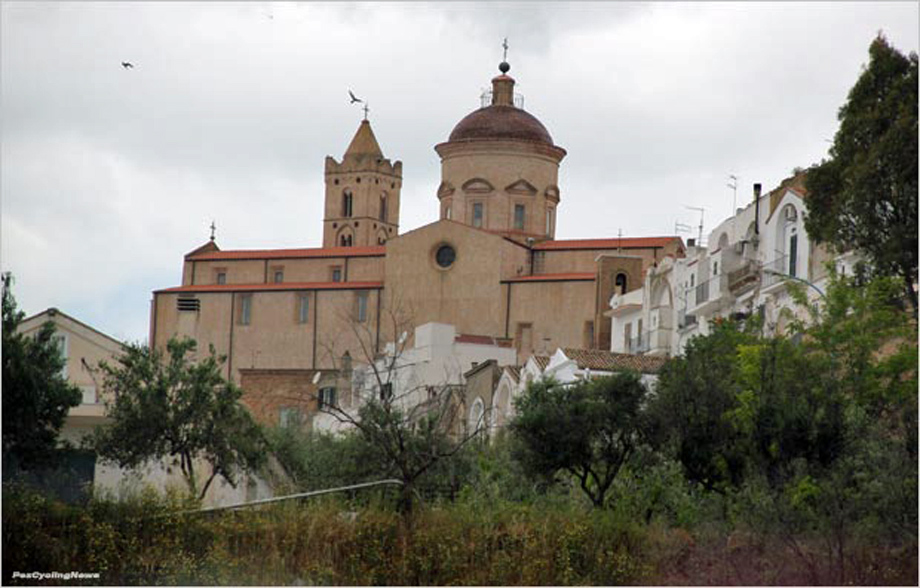 What’s up here? It turns out not much, the ancient citadel is closed, and based on the amount of pigeon poop and the odd empty beer bottle, it doesn’t get many visitors. Photos were snapped, views across the land were appreciated – but of course I suggested a different route down where our car had absolutely no place being. 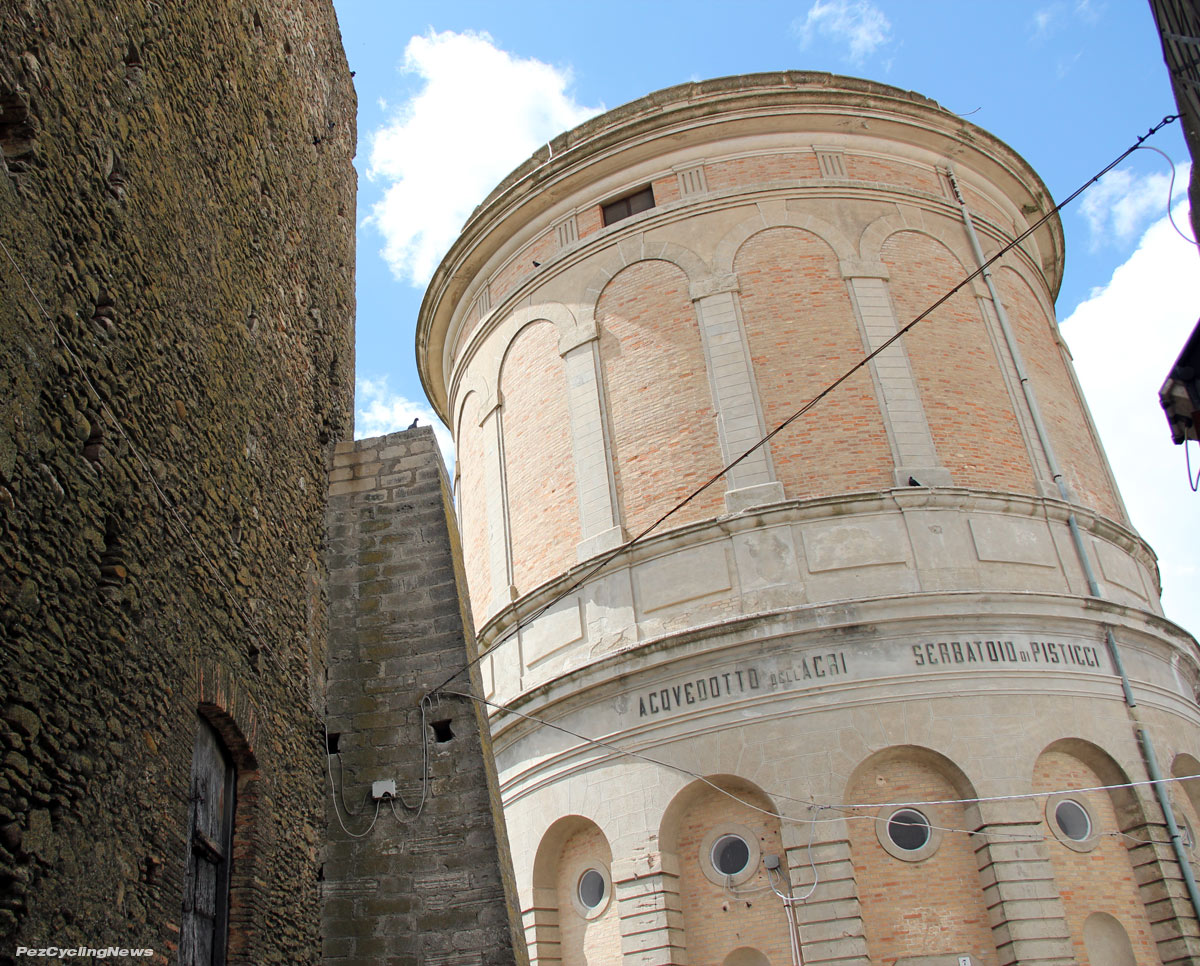 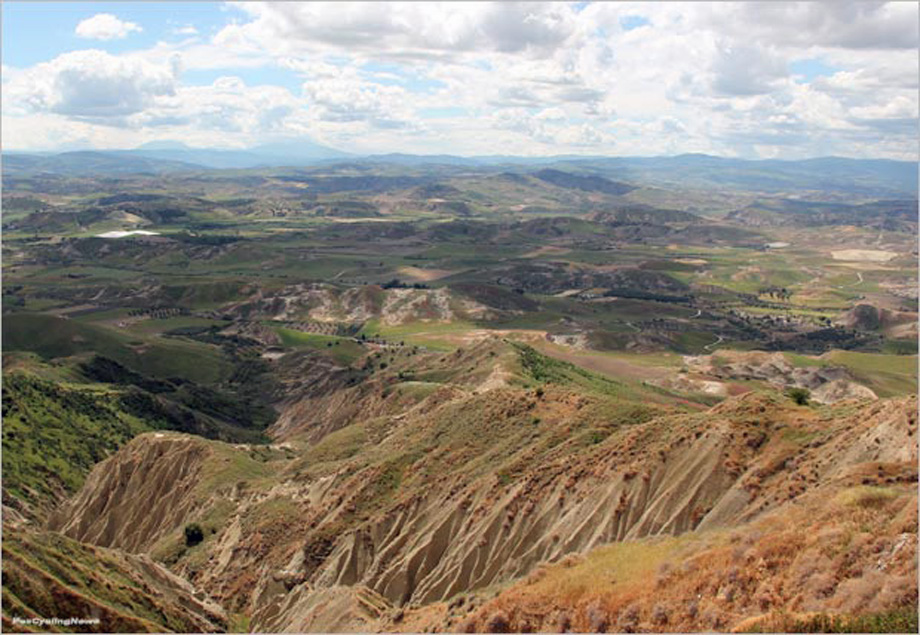 But we’d made it- the off course excursion had turned into a chance to see a place I’d never come to under normal circumstances. Even better – the car emerged unscathed – even after we got into a tricky spot where it tipped onto three wheels in a particularly tight turn. 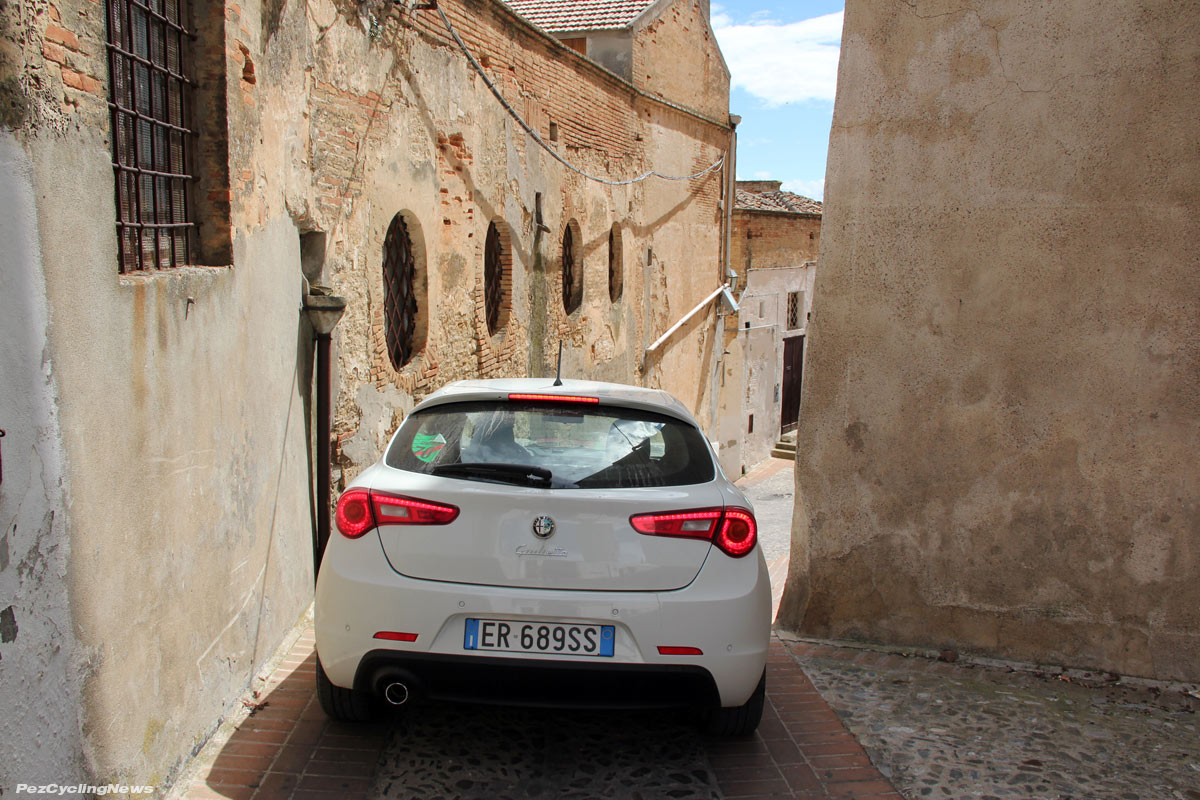 It’s Wednesday in Matera and a massive thunder shower is threatening to flood out the stage finish – the final meters are literally under inches of running water right now – the race is 72km out and we’ll see what happens. But regardless the adventure continues. 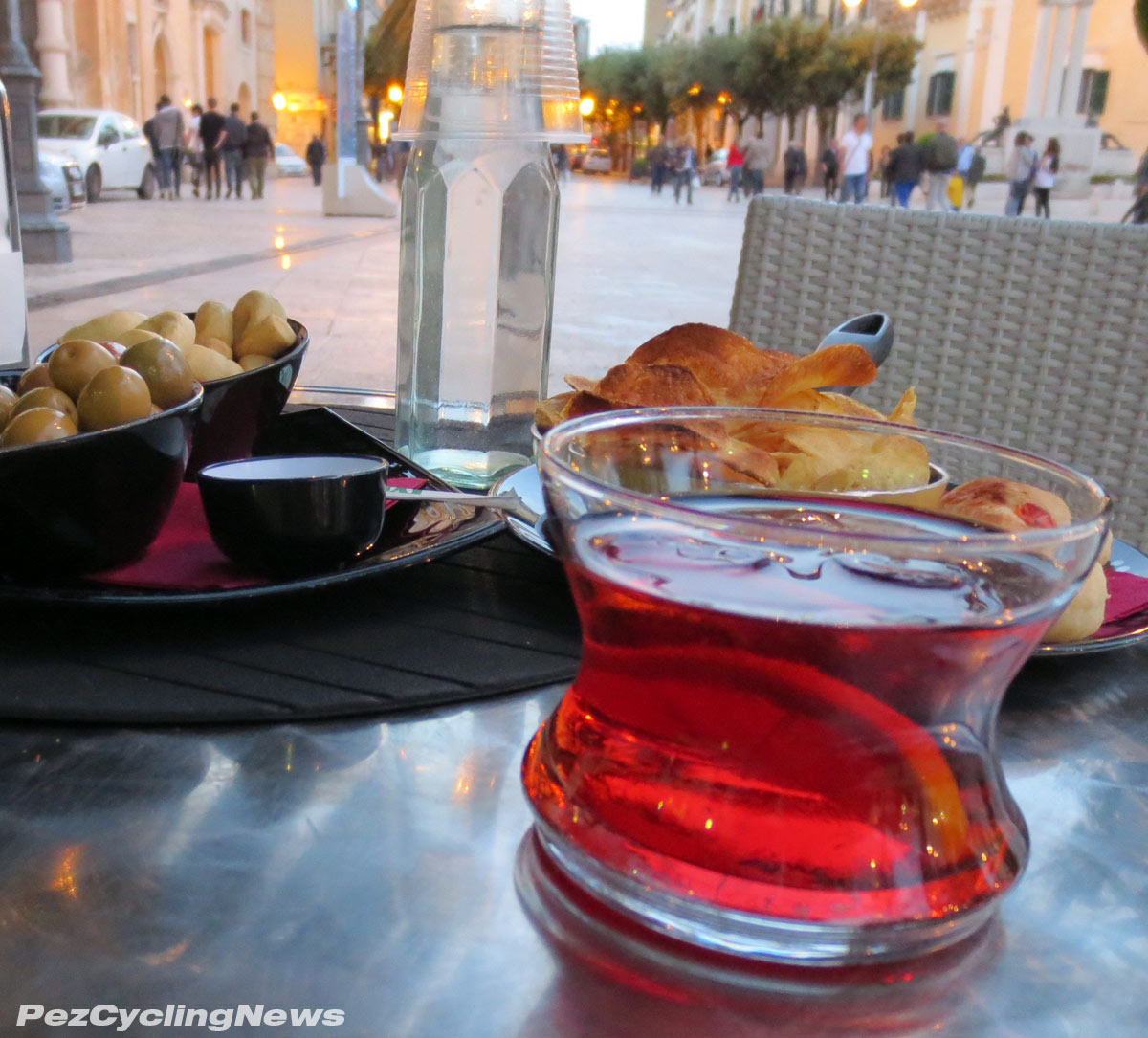 – And I did get my negroni after all. It was so good, I had two.

Keep it dialed PEZ for all the real Giro action.
– ciao a domani
Pez