In a land of amazing food, and even more amazing people, there’s always one meal that stands out when I chase the Giro. Oddly, these moments materialize when least expected, like my Meal To Remember from 2007 – which I tried really hard to get out of… and ended up being damn glad I didn’t miss it.

This year was no different, and the story is a worthy read not so much because the fresh home made food tasted so good, but because I was welcomed by complete strangers, to sit at their table, and share in the joy of a family meal after a great day of bike racing and celebrating in the town. 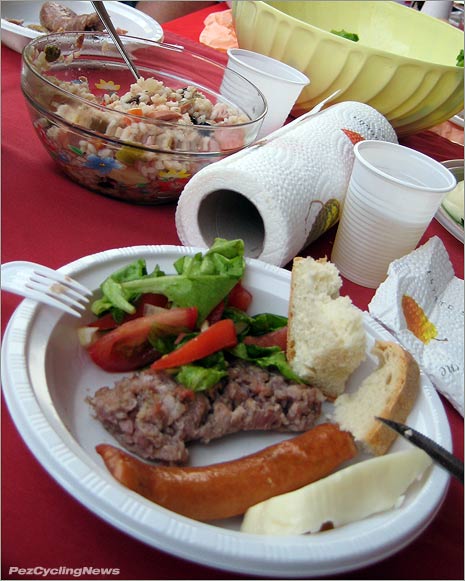 This may look like your backyard-variety bbq dinner, but it was actually the best meal I had at this year’s Giro.

It was stage 12 – the dreaded and pummeling 65km TT along the Ligurian coast, on a corsa that twisted and turned like a giant snake shedding its skin under a baking sun. Although other, mountainous stages were being hyped as more important, PEZ-Fans knew this day would be pivotal on GC. And like towns all over Italy, my Ligurian home-base in Levanto was fully into the festivities of the race, and the day – it’s not often the world’s best bike racers blast down the main street of your home town. 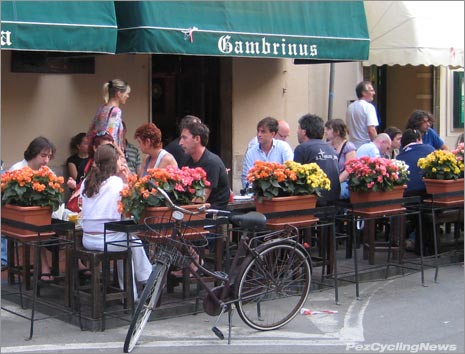 Little did I know, while sitting at this bar, what my future held.

Covering the stage was exhausting in itself – after a relatively leisurely start, (ie:8 AM), we were on the road by 10 to make the start village by 11:00. The heat wave had refused to abate, and we were ‘well done’ by the time we fiddled with the media parking and found our first espresso in the villagio di partenza. After watching the first riders take the starthouse, we chased several on course along the way to the halfway mark – 34km in – at Levanto. Lunch was a welcomed pizza and salad, plus requisite ice-cold beer, downed with just enough time to catch the gc big boys blasting through town. Then I was back on course – by foot this time – changing locations between each rider to ensure a variety of mixed photos. 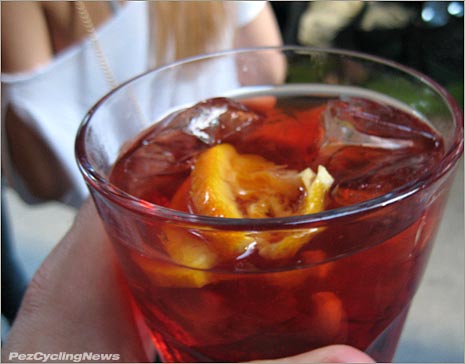 The Negroni – as much part of my good times… as me.

After the pink jersey came through as last rider, it was back to the hotel for 3 hours of photo editing and uploading. By 8:00 PM I called it a work day, and set off to find my beloved negroni – and enjoy a little down time before meeting friends from Non-Stop Ciclismo for dinner.

By 9PM I was finishing the last drop of my cocktail, and already enjoying its inebriating effects, as I set off to dinner. 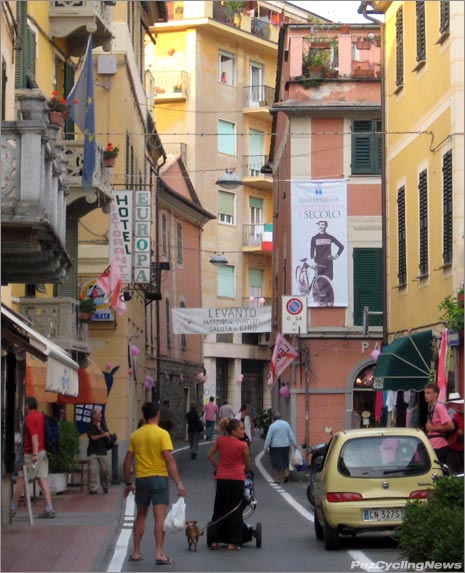 So there I am, strolling through the warm streets, tired but satisfied that we’d done a solid day’s work, when I spy up ahead a guy – obviously Italian – wheeling a peg-legged barbeque across the street. 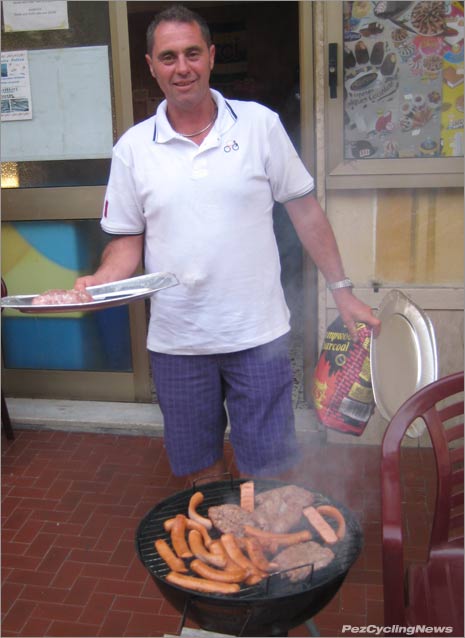 My gracious host – Angelo – consider him the Michelangleo of grilling sausages.

This in itself was not so unusual, nor was the smoke – billowing off the grill in a volume reminiscent of a Get Smart getaway car… (“Chief – would you believe…?”)

What really got my attention was the unmistakable scent of freshly grilled sausages. This – combined with my last-meal-was-7-hours-ago hunger, and my recently ingested apertivo – prompted me to instant action to both investigate, and also record the tastey tube-shaped post-production bovine torpedos on film (okay – memory card) to share with PEZ-Fans. 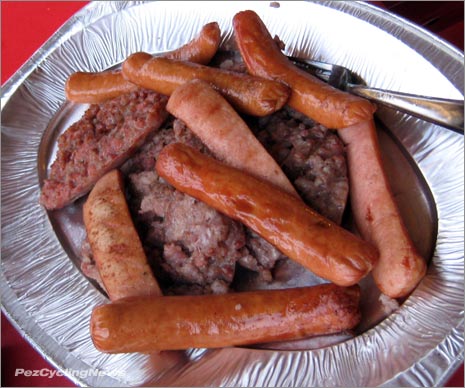 Although somewhat baffled by my request, Angelo readily agreed – obviously pleased that his culinary prowess had attracted my attention.

No sooner had I snapped the pic, than I was accosted by another exuberant – if inebriated chap named Claudio. His cigarette, which was somehow adhered to his lower lip so that it flapped and threatened to fly off in my direction with every word he spoke, was smoking almost as much as the bbq. 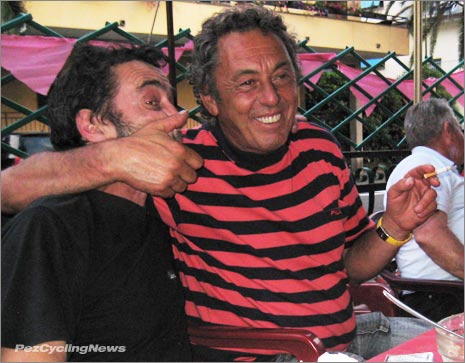 Claudio & Mauro – can you tell these guys are brothers?

And here’s where the story takes that ‘expected’ twist. Before I could wave Claudio’s smoking cigarette from my face – he was pushing me into a chair at the head of a long table set up for what was obviously a big family dinner – set up outside a cafй right beside the street. 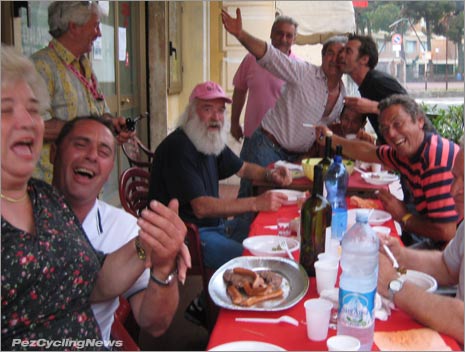 The group hug sealed the deal – I was in!

Of course these folks – who were complete strangers to me – and I to them – were speaking only Italian. I tried to explain that I had plans to meet friends, and was already late to meet them, so as much as I wanted to, I just couldn’t stay.

My meager protests were (thankfully) ignored, and as I was stumbling through my explanation, and full plate of sausages (two kinds~), rice, salad and bread was placed before me, and a plastic cup full of homemade wine poured.

I’ve been around enough to know the correct etiquette for these situations, and in spite of my dinner plans, this food smelled so good … 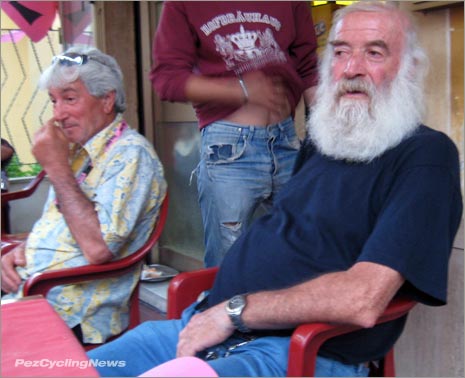 Giorgio didn’t say much – but he grabbed my camera and took half of these photos.

The only option left was to loosen my belt a notch and ask for a napkin.

What followed were two of the most enjoyable hours I’ve had at any Giro – nay… in Italy… or possibly anywhere. I’d been invited to join Angelo and his family – brothers, mother, sisters and inlaws – for their post-Giro celebration – and family meal. 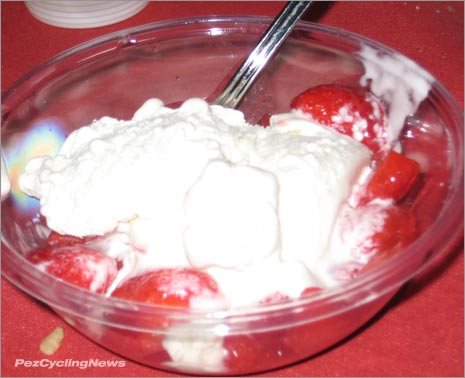 The food and wine flowed well beyond what I had room to pack in, and included fresh strawberries and cream for dessert, and of course a hot espresso pulled from the huge machine inside the bar. 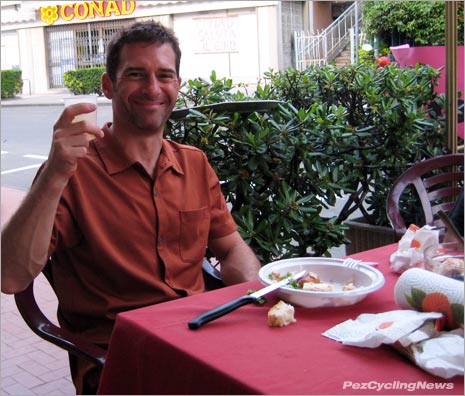 The Italians have world-class reputation as a warm and welcoming people… and I was lucky enough to enjoy it firsthand. The smile never left my face (between bites of their truly amazing sausages), and even now I wonder at the gaping yaw between what we North American’s pass for hospitality, and what is considered common place in Italy. 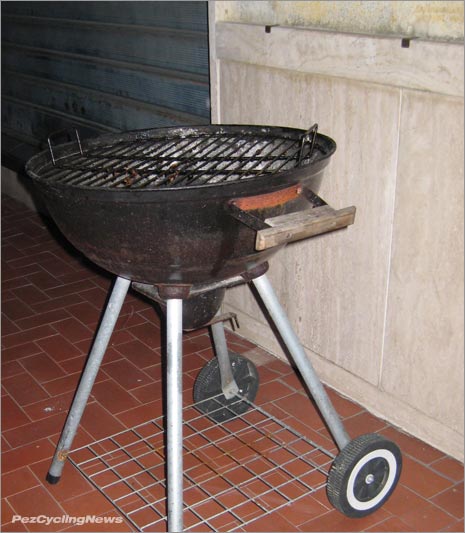 World leaders should consider one of these for their next peace conference.

If you ever get to Levanto – be sure to stop in at Circolo Arci (via Martiri Liberta 33) – and say hello. I’m sure you’ll be glad you did.