After freezing his way through Milan-Sanremo earlier in the year our roadside expert Alessandro thought he’d seen the last of snowy bike races for 2013 – was he ever wrong! We sent him out again into the snow and rain on stage 14 of that years Giro d’Itala. It’s a springtime snowy roadside special!

The 2015 Giro d’Italia will revisit the climb to Sestriere on stage 20, the penultimate stage of the Italian Grand tour. The Sestriere climb could be the final battle of the Giro’15, but you never know it could be hit by snow again as it was in 2013. Over to Alessandro for his day in the snow near the French border.

Roadside St.14: Once again the spring 2013 has shown the worst she could. It has been since the very beginning, from the stage in Sant’Elpidio at Tirreno that I continue to take a lot of showers chasing my favourite race. During the past week I was closely monitoring the weather forecast and there was no way to have a piece of hope for today and tomorrow.

A message to Pez headquarters two days ago “Weather will be bad, possible stage cuts or climbs cancelation. Will I proceed?” From Canada the order was clear, “Pez has to be there!”

So this morning when I hit the small town of Cervere and I found cloudy warm weather I was surprised and happy. No rain, it was a good start. But after less than two hours, when the riders started to get down from the buses the first drops started. In a matter of minutes the day turned from an acceptable one to a very bad one. The mind was roving to the Alpine climbs in front of the race. Is it snowing over there? The black clouds sitting on the north west were giving a clear answer; it was going to be a very long day for everybody but especially for the riders. 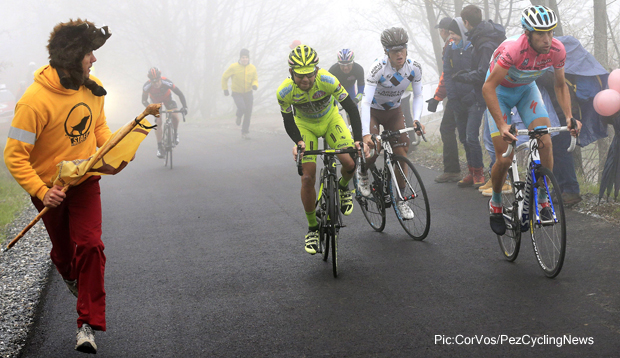 The day’s course may have been cut, but that didn’t stop Vincenzo Nibali putting the hurt on

Twitter was keeping me informed and a lot of rumors were saying that the Sestriere was cancelled. The RCS officials started a few minutes later to alert each team manager about the climb cancellation “We will pass into the valley, directly to Bardonecchia, the final climb is confirmed!” 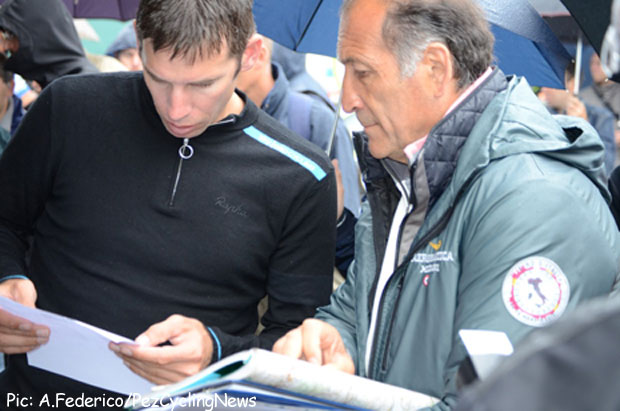 The day is safe, the Sestriere is an interesting addition but nothing more, the big actor is the 7km climb from the center town to the sky station Jafferau in front of it. 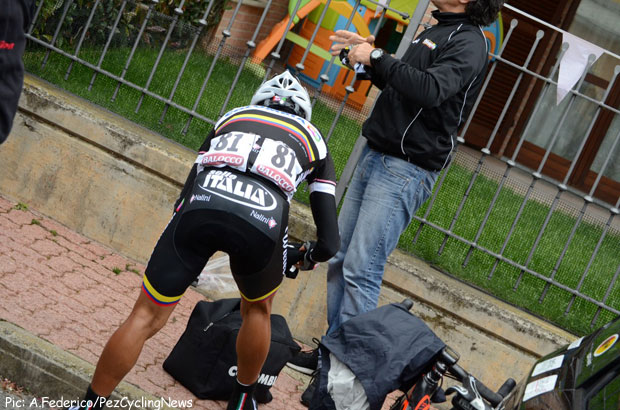 A quick change of clothes as the weather turns bad….. 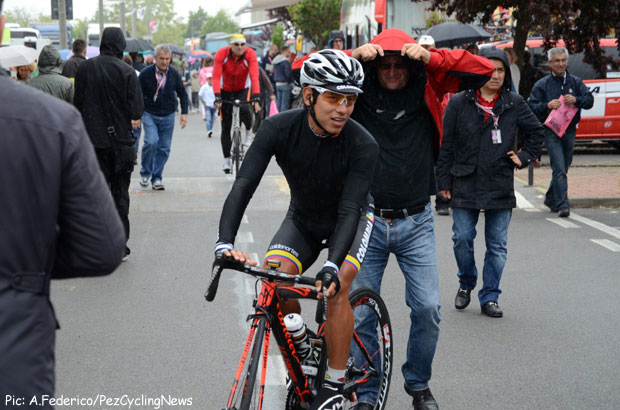 I was leaving Cervere ten minutes before the race start and it was raining a lot. I planned a fast passage in the first 20 km and that was a good part of race to see, with a big battle of the teams trying to break even in such bad day with a lot of wet roads in front. I really recommend to each one who didn’t already: you have to watch a grand tour passage in the first hour; it’s sometimes much better than the final. 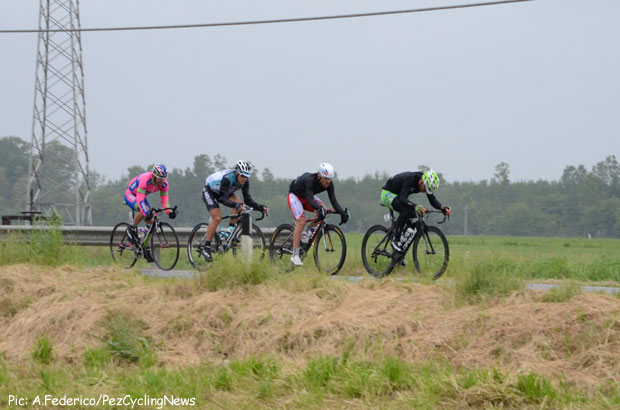 The day’s break has gone clear 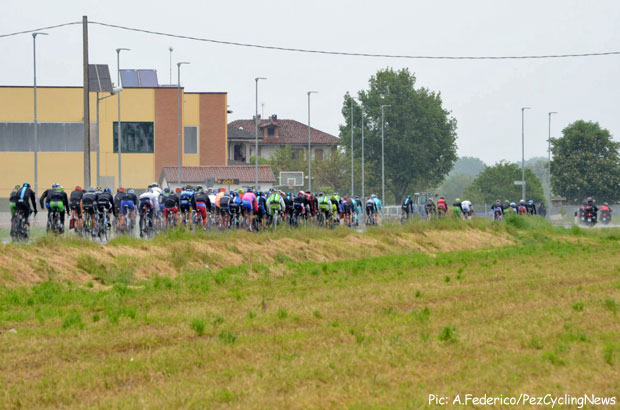 But today the finish is a climb and it will be great to be there. So I went onto the autostrada and a fast drive through the mountains. Why, are we in mountains? The fog was so low that it wasn’t possible to see the beauty of the place. Just after the exit the RCS organized a car park for all race veicles including the press. They also gave the opportunity to use the lift for free which was travelling to a few meters from the finish line. Fog and snow. Second time in a year chasing a bike race seems too much after the terrible Milan-Sanremo.

I decided to walk down a bit to come out of the fog, this was definitively a good decision because I didn’t freeze waiting for the race and I could get out of the cloud, out of the snow and with a very good visibility of the valley. 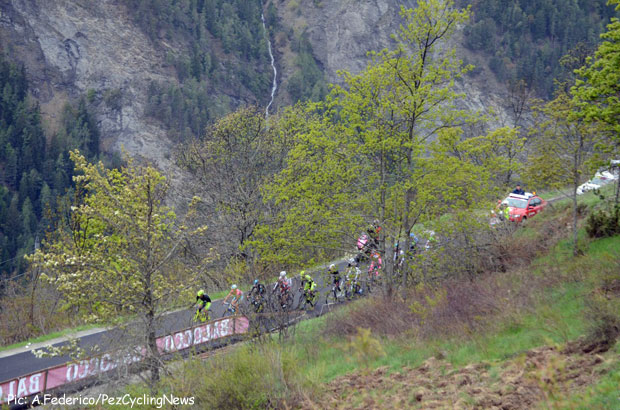 The 3km to go seemed to be a good place and the group was already down in the valley preparing for the final effort. Six to go, five to go, four to go… the fifteen minutes I had to jump from the cold; the freezing wind coming from the valley was not helping. But the race came; three leaders with a small margin on the maglia rosa group. 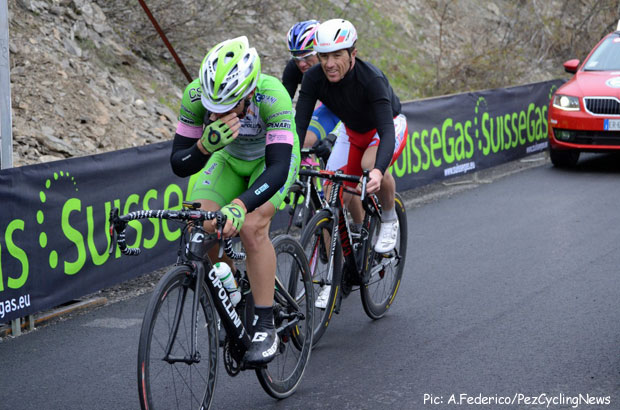 Gesink was riding with team mates at a significant delay. I missed Scarponi who was also behind and losing time. 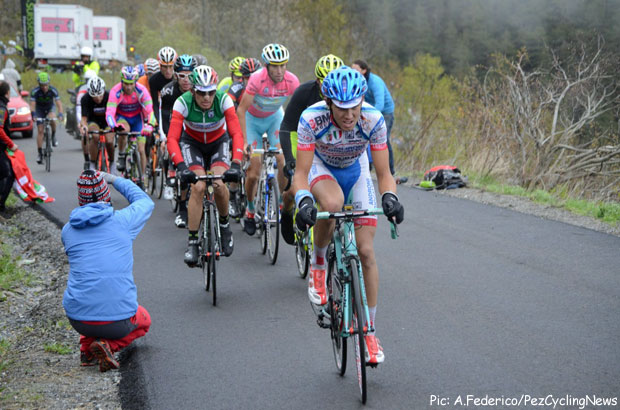 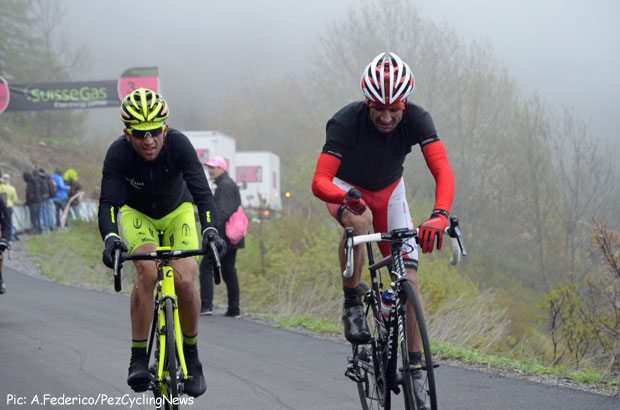 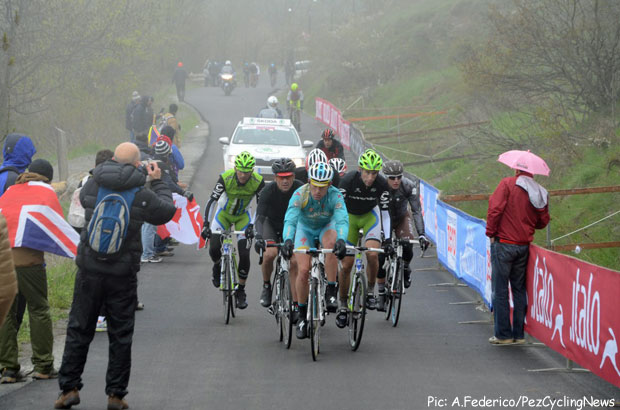 Now me and my driver Salvo are coming to our room, found on the web at very last moment 50km south into the valley. It’s raining and seems there is no hope for improvement. Several rumors said that tomorrow stage will be cancelled or anyway cut in large part. We don’t care, we had anyway a great day, there’s an evening ahead and we are already looking for a typical restaurant to eat a local speciality. Tomorrow will be great anyway whatever RCS and weather will reserve for us.

You can read about Ale’s next stage on the Galibier here… an epic. 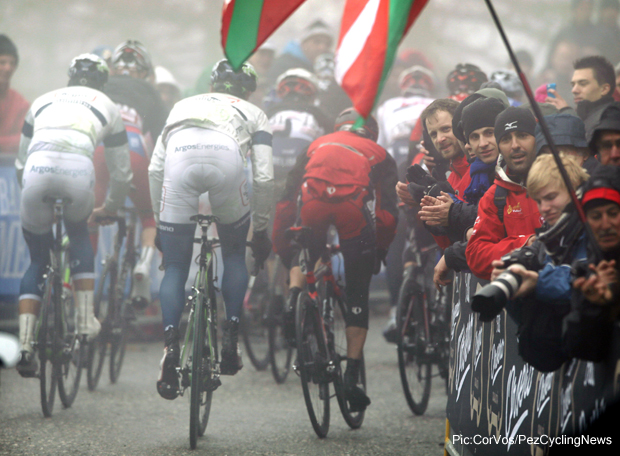 The weather was bad, but the fans were there for the last riders to finish

Let’s hope Ale manages to get to Sestriere in 2015! 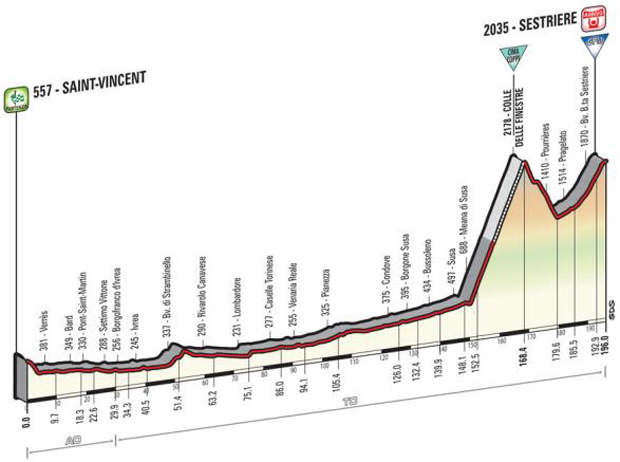