Giro Reload: Stage 16 of the 2015 Giro d’Italia will revisit the horrendous climb of the Mortirolo, back in 2008 Ale Federico made his own ascent on the penultimate stage of that years Italian Grand Tour. We relive Ale’s pain, suffering and hunger as he discovers his ‘mazzo’ on the Mortirolo.

Roadside Giro’08 St.20: In Italian we say “Un mazzo cosm!” that can be translated “So mazzo!” to mean you have to sweat a lot to do something. This “mazzo” is a slang word coming from a card game and gives the idea of the suffering, of the difficulties. Certainly anyone who rode the Mortirolo knows the meaning of “mazzo”. 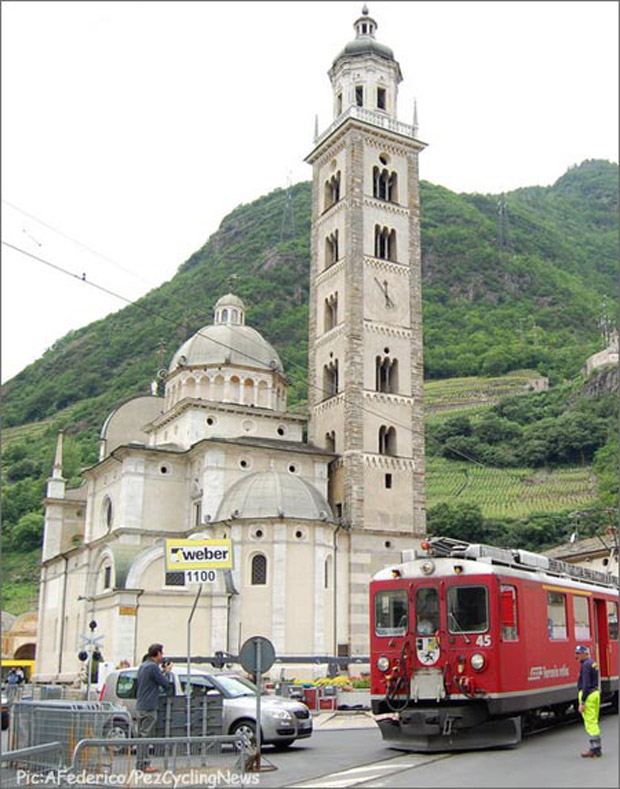 The Basilica della Madonna in Tirano. She closed the way to the Swiss in the past, nowadays a trains connects the two countries

The road that takes off in front of your incredulous eyes, the rough tarmac, the never ending slopes over the ten per cent, turns and turns without a chance to breath. So, there’s no surprise that the small village at the base of the Mortirolo climb, located in the Valtellina Valley, between the Como Lake and the Gavia – is called Mazzo di Valtellina… Could it be something else? 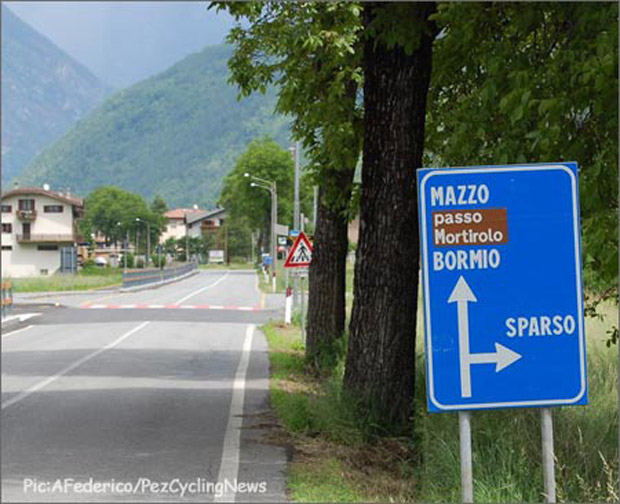 It’s morning when I arrive in Tirano after a long trip from my house to Genova to leave the family and from Genova to the Valtellina where the Giro has to find his winner. Will it be so? Until today the Mortirolo has always been decisive, so no chain can keep me sitting in front of the TV: I have to go there! 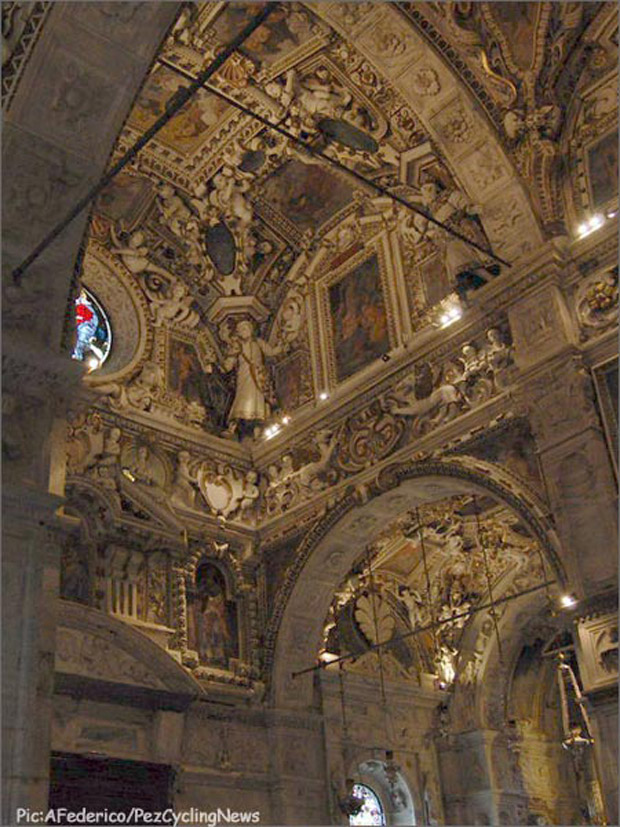 Tirano is a small town in the middle of this valley which is one of the longest of Italy. As in the valley they produce honey and apples, but their speciality is the “bresaola” which is a “salame” with a very different taste from the traditional. Usually we eat it covered by a mix of oil and lemon but also a “panino” is not bad with it. When I was a baby I hate this bresaola and now I am here looking for a slice of it. Strange the life isn’t it? 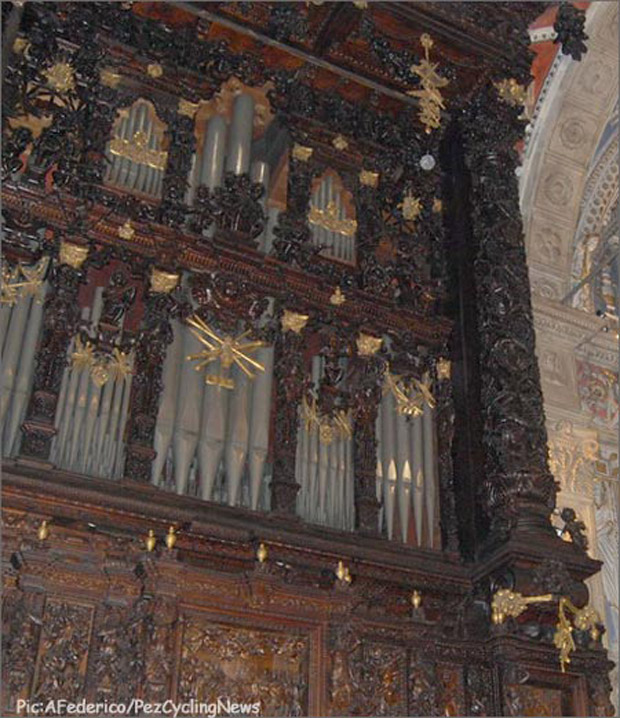 But what really surprised me a lot about this city is the main dome which is quite different from the other churches located in the valley. Usually these mountain churches can be nice from the outside but then inside are quite disappointing, but this one, “Basilica della Madonna” is really breathtaking. I never see this kind of collection of beauties inside a mountain church. 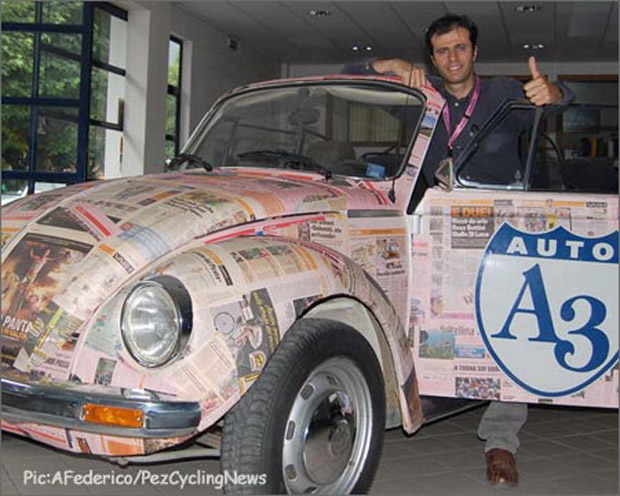 Why don’t we go on the Mortirolo with this nice car prepared for the Giro?

One local explains to me that this one was built near 1500 a.d. on the order of the Pope himself in order to try to contain the protestant revolution which was descending from northern Europe here to Italy. The result of this story is this fantastic dome in the middle of the town in the middle of the way out to Switzerland, almost to close it. 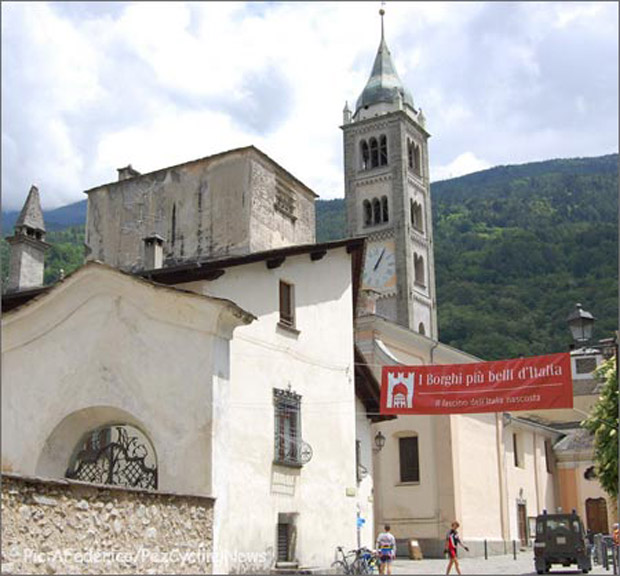 Here we are: Mazzo in Valtellina. The nightmare begins

Just its organ is a reason enough for a visit. But times have changed and now Switzerland is very well connected with a spectacular train which cross the mountains on the border. It’s time to go, I don’t have time to look also for the bresaola; Ed informs me that he is already on the top of the Gavia and I’m still here losing time! 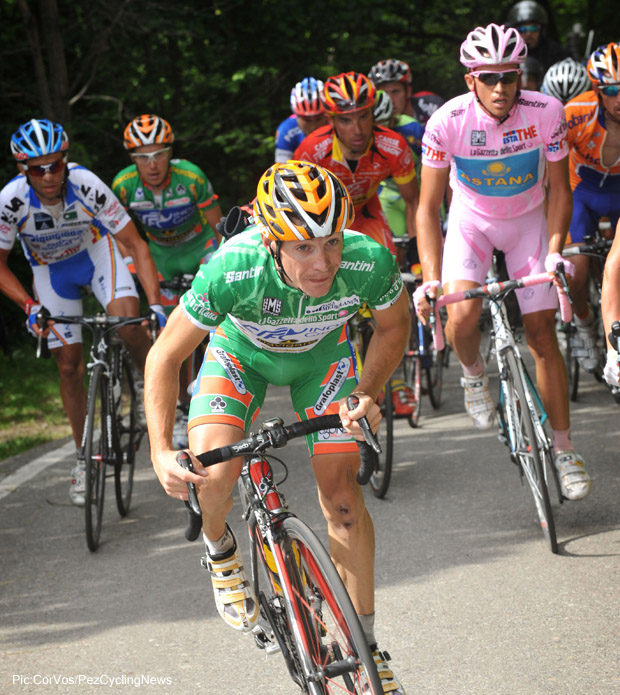 Emanuele Sella attacked on the Mortirolo

Mazzo is not far and the 10 km between the two cities is a good warm up for me. I’m totally out of shape but I have no intention to go to the top. I already climbed the Mortirolo with Richard in the 2006 and I know what is waiting for me. 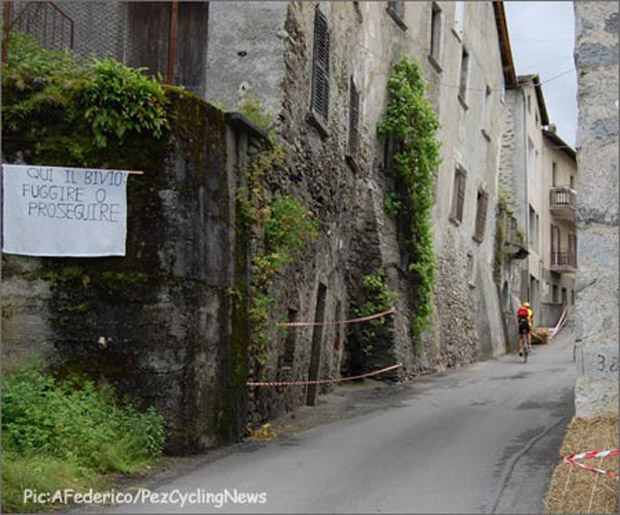 A placard advice: to run away or to continue?

A step behind… the reality is that I didn’t ride with Richard. I was overcome after 2 km when I had more than half an hour on him. This climb is really steep and I’m a little bit afraid when I read the placard saying “here the alternative, to run away or to continue”. I continue but I already know it will be the time of the “mazzo”.

Profile of the Mortirolo:

The first 4 km are difficult but not impossible. Then, when you arrive at the San Matteo church you know it’s finished. Sweat, labours, prayers, curses: these are waiting for you. In Termen the maximum slope. The Giro guide says 18%. But the numbers cannot explain what it’s like riding here. 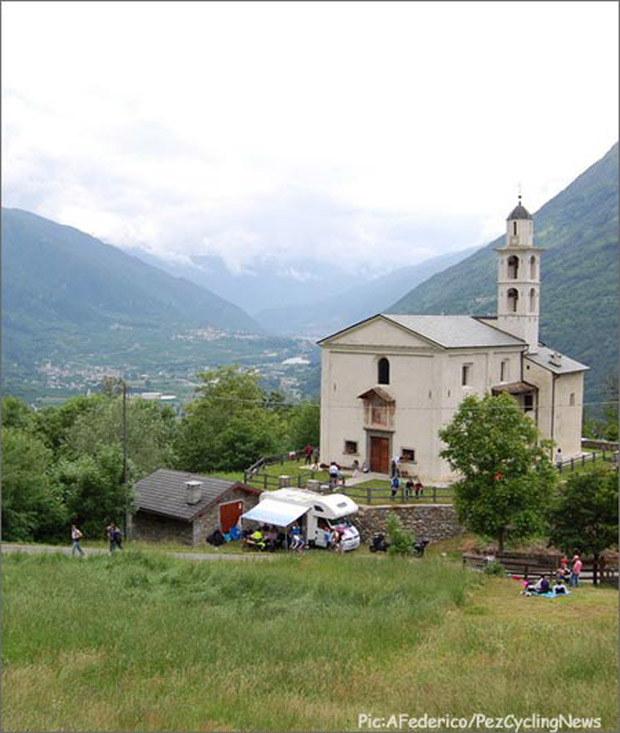 One Pez reader overcomes me and recognize my jersey. “Jesus, it’s unbelievable” – his words. I have no words, so I publicly make my excuses to him now if I didn’t reply… then, what to say? Yes, it’s unbelievable. It’s terrible. So why go ahead? But everyone does.

3D Map of the Mortirolo:

Then I stop. It’s a nice place and there’s no reason to proceed. I would also like to see the finish and I don’t want go to high. The weather is bad; it’s not raining but it’s could. 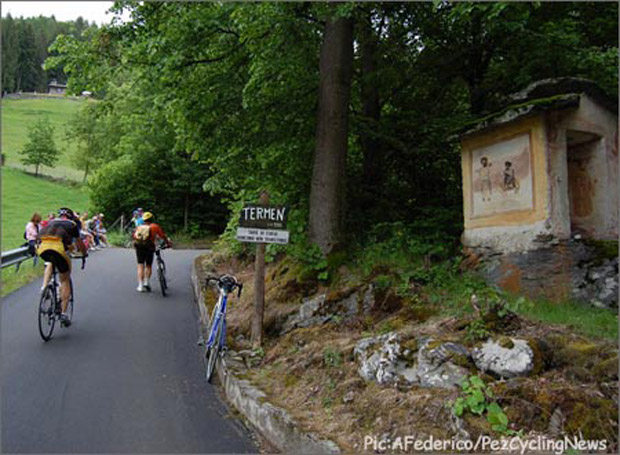 Termen, the steepest slope of the entire climb. We’re just at the 4th kilometre.

Ed calls me after a long black out. On the Gavia the weather is very bad; there’s a lot of snow and it’s starting to rain. I feel cold just to think what’s on the top of that high mountain. So, my idea to stop near the flowers at the sun looks to me better and better by the time I recover my energies, except for the fact that a guy near me has his own panino with bresaola and me none. 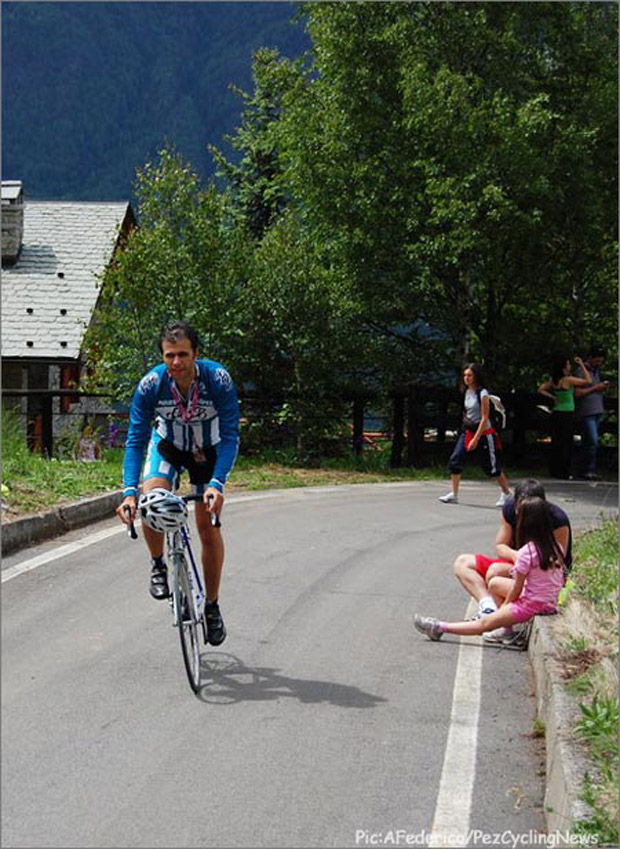 Then the race. There’s Colom in front, than Baliani, then Perez. Then the Rosa bunch. Everybody is looking around, nobody tries to attack. Di Luca is in trouble. I think this Giro has been really difficult and now, in the queen stage everybody is exhausted. 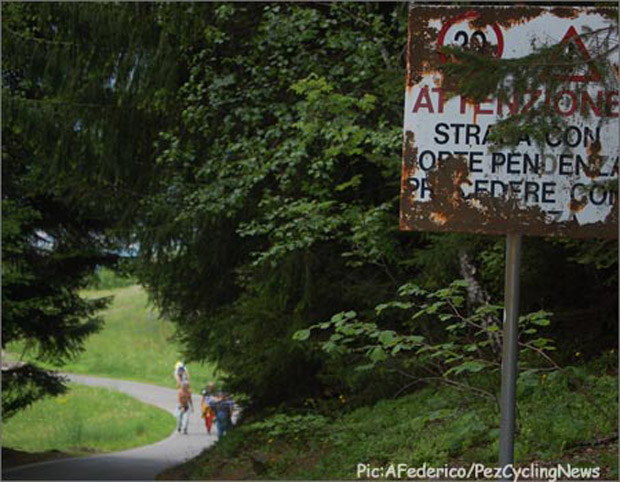 The road here is dangerous – any way you take it

I’m not. I would go ahead for other 20 days, looking and chasing the Giro. But also for me, its just a matter of time. Tomorrow I will be with Ed in Milano, drinking the negroni (cheers Richard) and saying goodbye to the Rosa for another year. 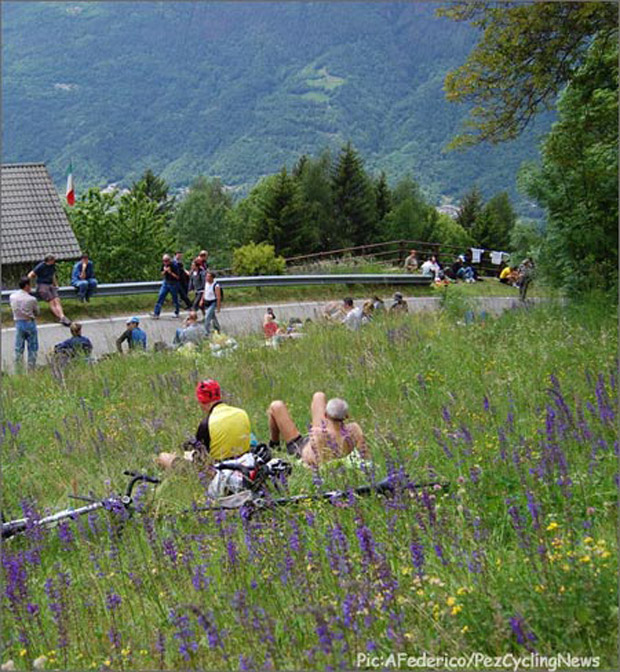 Talking about the Negroni now I can reveal that when I suggested to Richard to cover the first week to discover the beauties of the South Italy I forgot to tell him that the Negroni is a drink of the North. I felt a worm reading his reports when he wasn’t able to find the perfect Negroni! 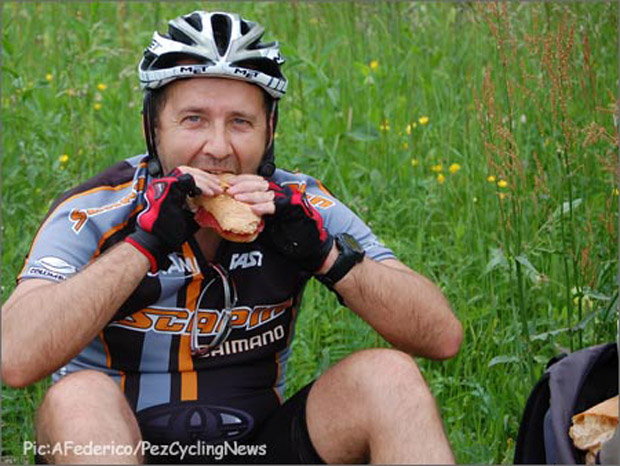 Now I’m in Tirano and I had my last contact with Ed a few minutes ago. Everybody here in the press room is very busy but the mystery of the Giro is not revealed yet. Contador is still in Rosa and this is the big surprise after yesterday stage. He’s the big favourite for tomorrow, but who can say that Ricco is out of the games with just 4” on the Spaniard? And 2’ on a TT specialist is enough for the Rosa? I will sleep on these questions. For me the day is finished. Tomorrow another…mazzo!

On the penultimate stage of the 2008 Giro d’Italia Emanuele Sella attacked the peloton as they climbed the Mortirolo, and when the split had been made he attacked again on the final climb to Aprica and solo’d his way to the finish line. Behind; the important riders came in over 1 minute down on the diminutive Italian. Going into the final 28.5 kilometer time trail from Cesano Maderno to Milano, Alberto Contador had 4 seconds over Riccardo Ricco. As expected Contador was too fast for Ricco and won his second Grand Tour by 1:57.

You can read the full stage report from 2008 here. 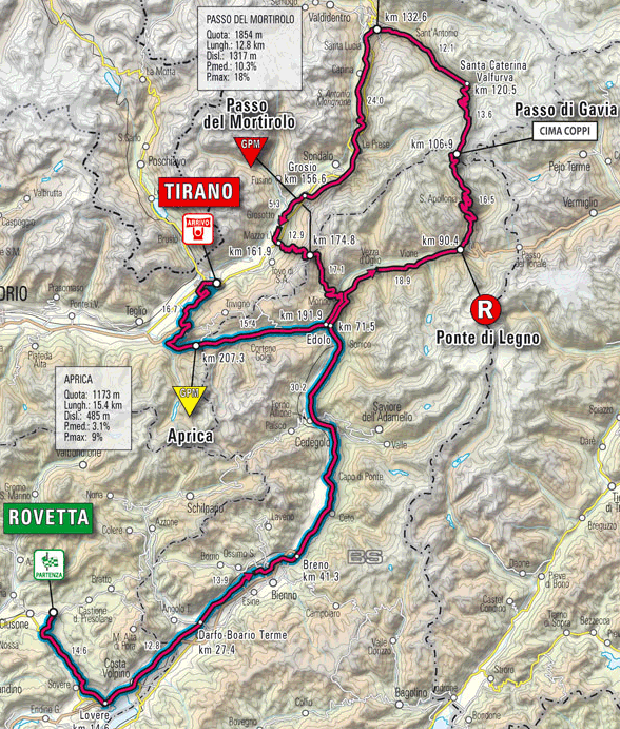