“There’s a man alone ahead. His jersey is white and blue. His name is Fausto Coppi.” It was 1949 and the stage was Cuneo – Pinerolo, Giro d’Italia of course. The radio was the only way to follow the Giro at that time… and fans across Italy listened as one man on a bicycle taught a broken country to heal itself.

The highest point of each Giro d’Italia is called the ‘Cima Coppi’ – symbolically named for the greatest bike racer Italy has ever produced. The first rider over the top wins the prize for that year, but to the Italain fans, the Cima Coppi is a prize of much greater significance.

Coppi battles Hugo Koblet… amid an armada of media vehicles.

On Thursday, May 24th during the 12th stage, the Giro will climb the Colle dell’Agnello on it’s way to Briancon. The Colle dell’Agnello is one of the highest points in Europe at 2744m. The famous Stelvio is only 10 meters higher. But what’s the story behind the Cima Coppi, and why is it commonly known as the Stelvio?

Coppi was not just a climber. He is considered the first rider of the modern era. His career cannot be summarized with a list of numbers even if they are impressive. Five times the Giro, two times the Tour, three times the Sanremo, five the Lombardia, the Worlds road and track, the Roubaix, and the Fleche to list his more well-known victories. 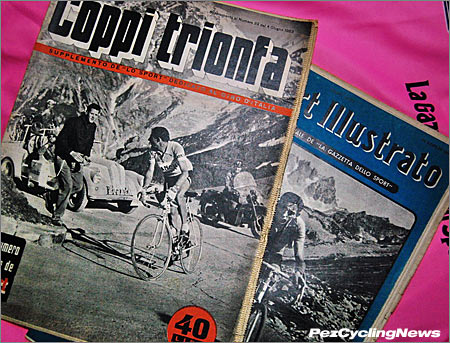 Coppi on the cover of the ‘giornali del giorni’ sold a lot of magazines.

But it was how he won them that inspired the imagination of the tifosi and many foreign supporters (Coppi was appreciated particularly in France where the people used to call him Fostт, from Fausto, his first name).

He won the Milano – Sanremo in 1946 (just after the Second World War) attacking before the Turchino. More then 150 km alone to a winning gap of more than 14 minutes. He won the 1949 Giro after the unbelievable stage from Cuneo – Pinerolo when he attached on the Maddalena (the first of five climbs) and he continued to increase his gap on the Vars, Izoard, Montgenevre and Sestriere. He won the Tour 1949 after the Giro in the same year. He was the first man in the history to do it when everybody was sure that it was impossible. He did it again in the 1952, when he won for the first time in the history on Alpe d’Huez.

This is not enough to understand Coppi. We have to jump back to that time and imagine Italy after the Second World War. The Italians. Like the rest of Europe, were emerging from that tragedy with many difficulties. Humiliated by more than twenty years of fascist dictatorship, and with an uncertain scenario for the future, divided between communists and Catholics, the Italians found in Coppi and in cycling the only reason to be proud of themselves.

His personal tragedies, the loss of his brother Serse, a rider as well who died during Milano – Torino 1951 in an accident, the love for a woman and his decision to leave his family for her, made him an absolute character at the beginning of the fifties. He died in the 1960, 2nd of January, when coming back from the Africa (he was a great hunter), the local hospital was not able to diagnose the malaria. 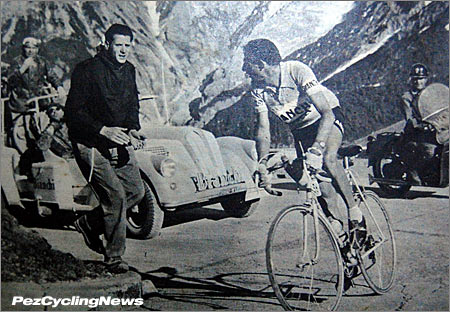 Coppi’s attack on the Stelvio at the ’53 Giro won him the race and galvanized his legendary stature.

In this picture we have to collocate his special win of the 1953 Giro when the myth of the Heron on the Stelvio (climbed for the first time) was born. It was one of the last stages and the Giro was considered “closed” [finished]. Koblet (one of the most famous Swiss riders and winner of the Tour 1951) was in the maglia rosa and ahead, for the first time, was the Stelvio. The legend tells that the evening before, in Bolzano, Coppi was convinced that Koblet was unassailable after a stage during which he had to pursue the Swiss around the Dolomites. At the arrival in Bolzano the two heroes were alone. Coppi won the stage and Koblet second wearing a colourful Rosa jersey. It’s usual that two contenders agree in such way; “I leave you the stage and you leave me the jersey”. 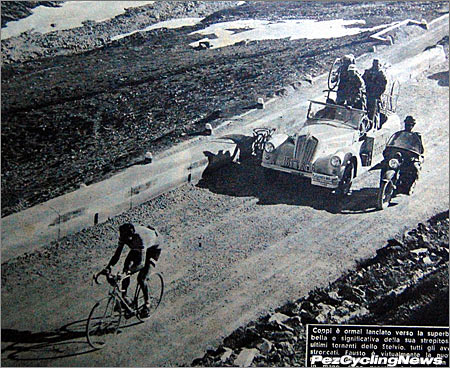 Coppi attacked at the beginning of the climb and realized a legendary flight to Bormio. Koblet faced a serious crisis up to the top of the Italian mountain and tried to recover part of the gap in the descent without luck. Exhausted, he crashed just before Bormio and lost any hope of staying in the pink jersey.

Since that time the Stelvio is universally known as the “Cima (Top) Coppi” and yearly the Giro remembers that epic day nominating the highest climb of the race with that name, and a prize to the first rider over it.