By Edmond Hood On May 23, 2016
Share
Like PEZ? Why not subscribe to our weekly newsletter to receive updates and reminders on what's cool in road cycling?

PEZ Roadside: When the 2016 Giro d’Italia route was released everyone said the race didn’t start until the final week and that came true on Friday’s mountain stage. But everyone knows that the Giro doesn’t start until Ed Hood lands on Italian soil – and business item #1 was join team Orica-Greenedge on their final rest day.

No rest day spin on wet roads for Esteban, it’s the turbo for the little Colombian; smiling as he spins on that inside ring with those South American samba rhythms flowing from his blue tooth speaker. 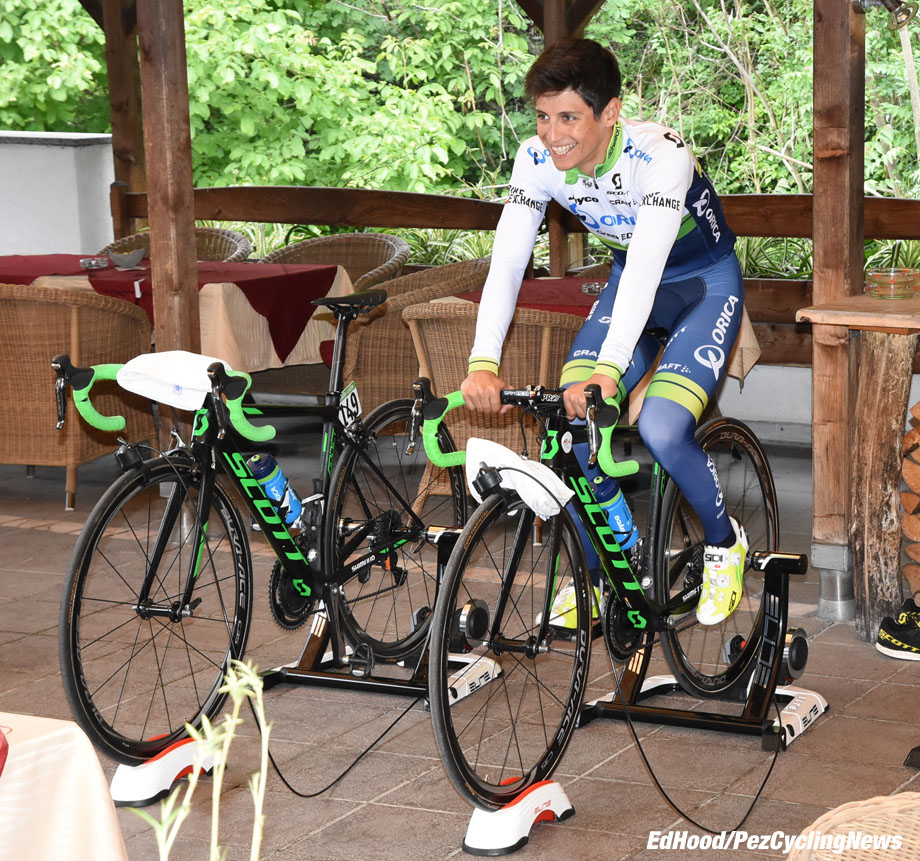 It’s our first day on the 2016 Giro and we’re at the Orica-GreenEDGE team hotel high in the Dolomites in Chiusa. 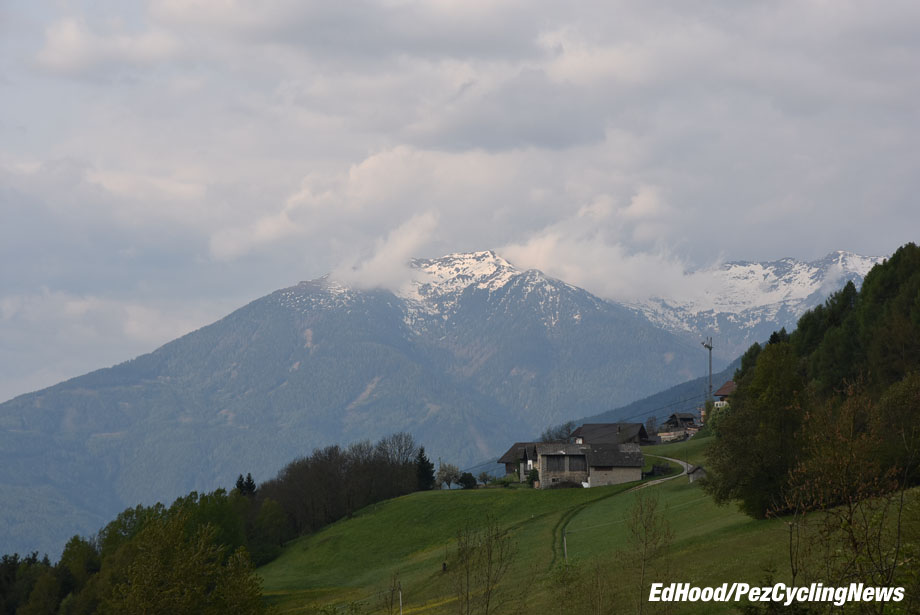 Come to think of it, our digs weren’t so bad either with stunning views over the mountains and a great breakfast; ‘just like English breakfast’ said our host. GreenEDGE were in the Hotel Der Rierhof, Via Fragburg – German is as much the language here as Italian and there’s even a Latin based local dialect. 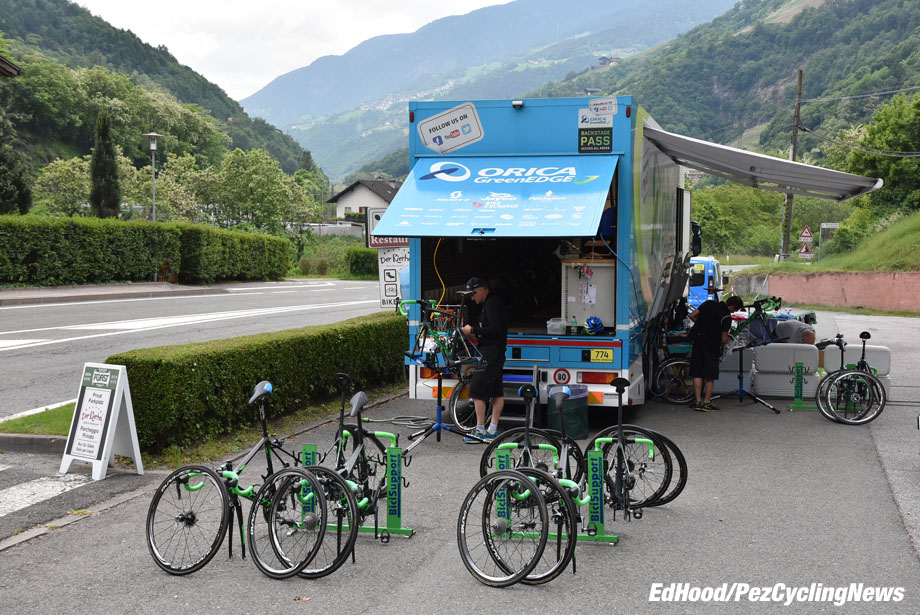 It’s not a big ‘chain’ hotel, just a small local place right beside the main road.

Orica-GreenEDGE ride Scotts with their top of the range ‘Foil’ – as ridden to victory by Matt Hayman in Paris-Roubaix – much in evidence.  [See the PEZ FOIL review here.] 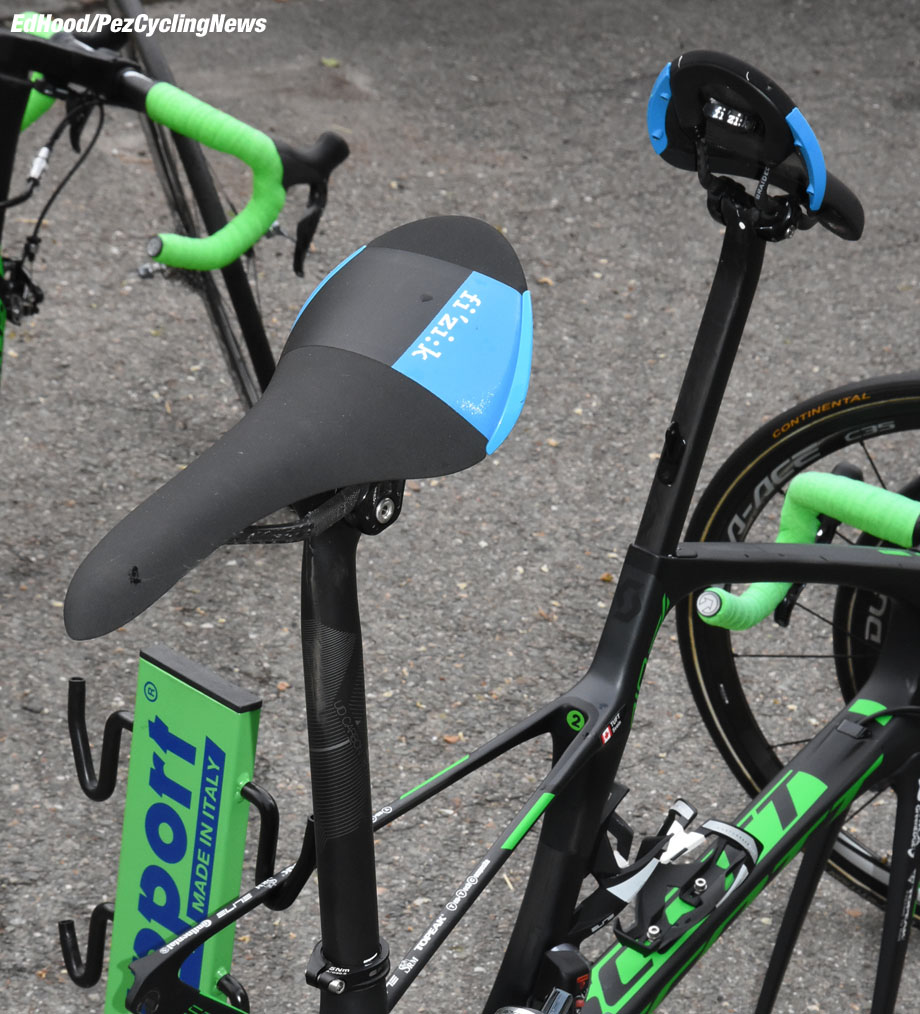 There are some big lads on the squad with huge amounts of seat post on display and stems slammed down hard on the headset. Contrasting with Chaves’s dinky machine. 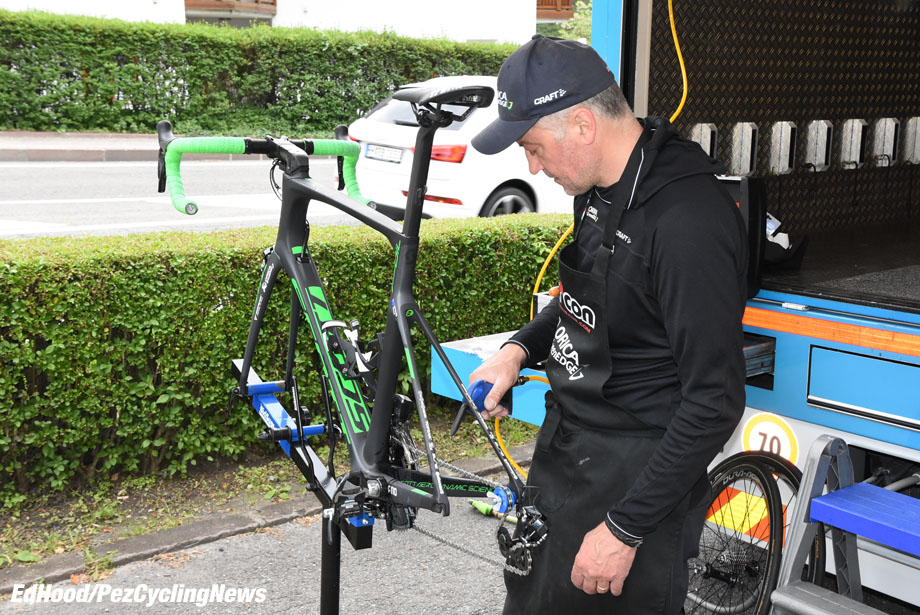 The mechanics are hard at work on the black beauties; those Scotts even get blow dried. 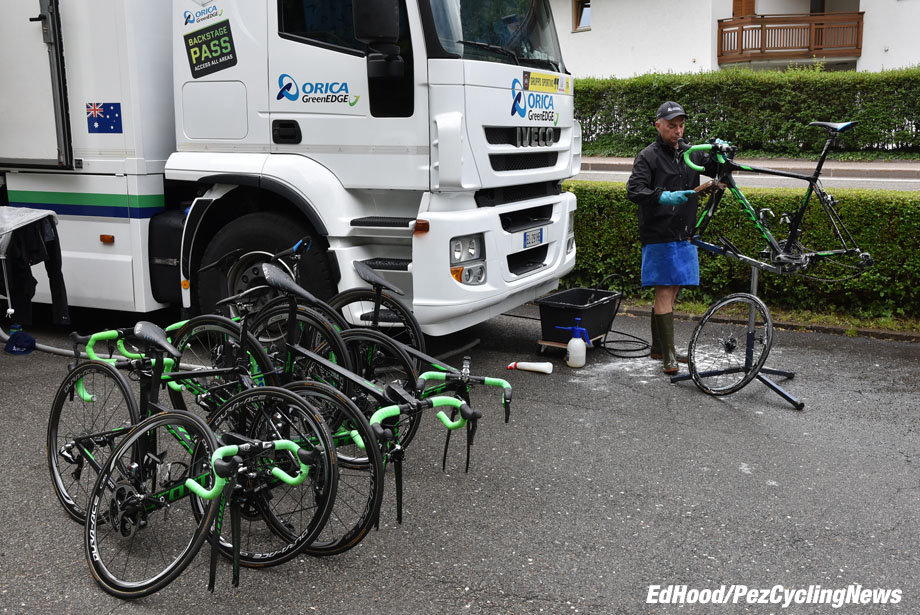 When you’re young you think how cool it would be to work on gorgeous bikes every day – but on a chilly Dolomite day, standing there in your wellie boots, it’s not so glam. . . 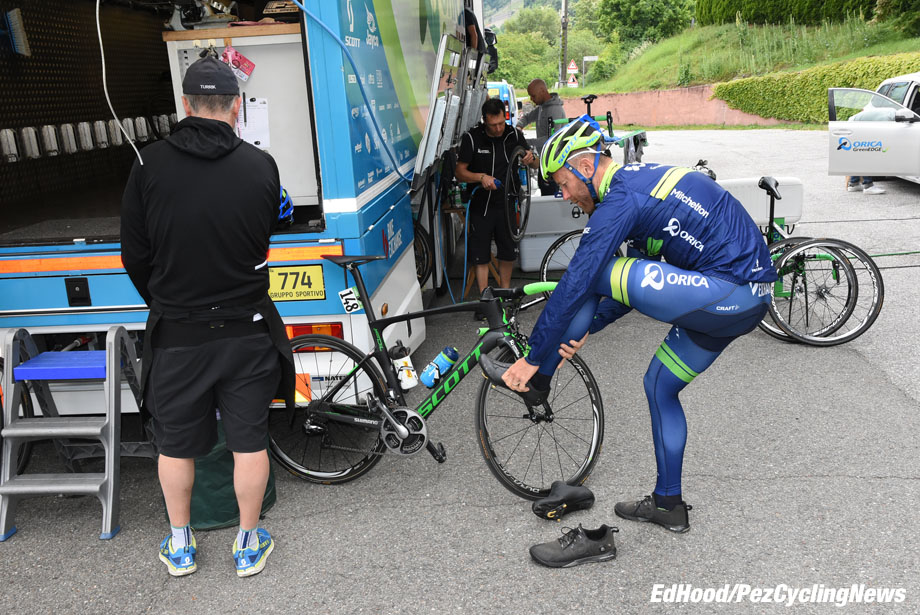 Sven Tuft appears to head off for a pedal, the big Canadian didn’t go too deep in yesterday’s mountain time trial – third last at 6:44 down over 10.8 kilometers, level with sprinter Nizzolo.

The Russian, Foliforov from Gazprom was the surprise winner whilst Nibali endured a ‘chrono disastrosa’ according to the Gazzetta – the Sicilian’s chain coming off the chainring resulting in a bike change. 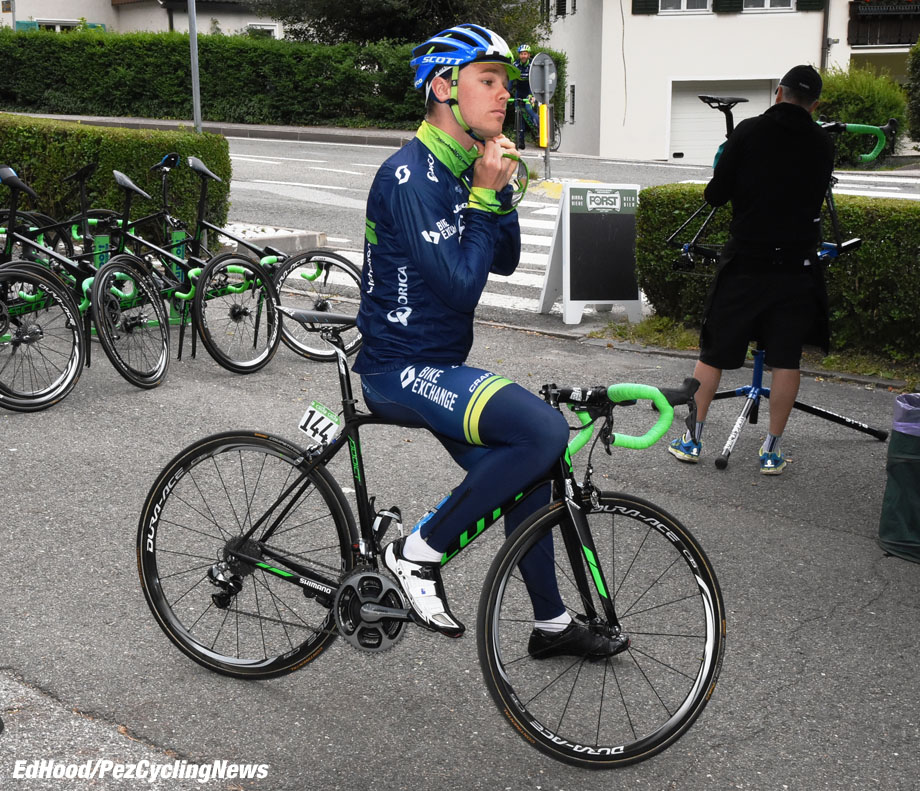 Former World Individual and Team Pursuit Champion, Michael Hepburn joins Svein for their spin – Hepburn’s getting that core strength built up for the Rio team pursuit. 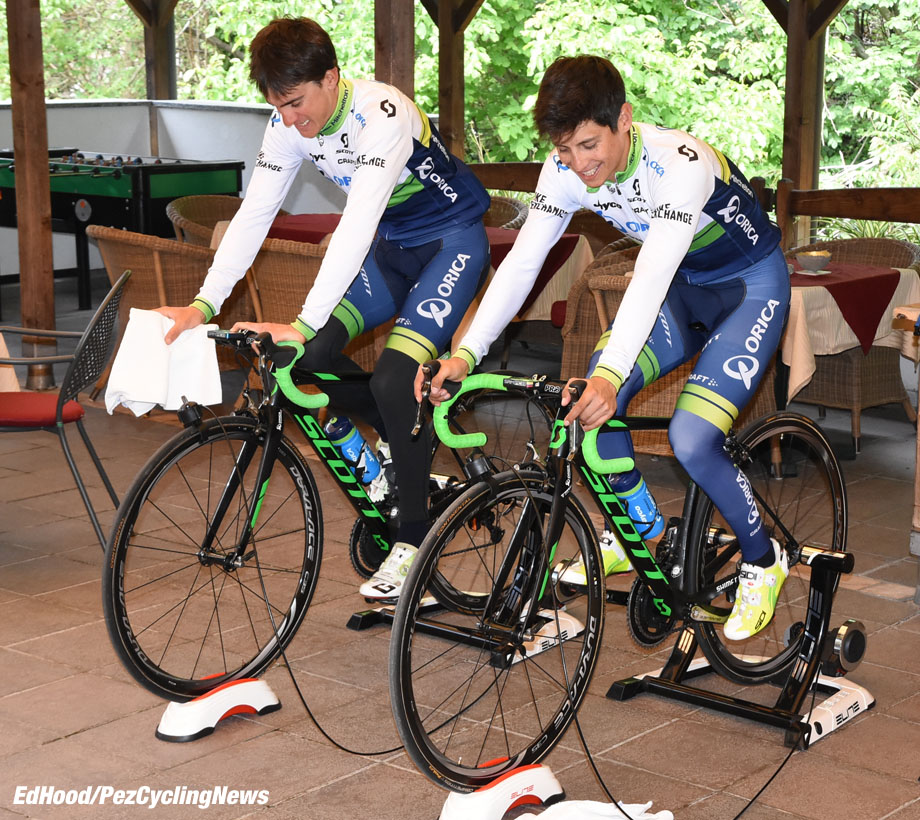 Meanwhile back up at the hotel, skinny Basque, Txurruka joins Chaves on the turbo, they chatter away in Spanish as the bossa nova beats spread mellow sounds from the speaker. But not for long as the journos, photogs and camera crews jostle for position.

We’d enquired earlier if we could get some ‘one to one’ with Esteban; “definitely NOT!” came the reply

Txurruka pedals away at 80 rpm as the rugby scrum gets ever denser around his team mate who slips between Spanish and English without missing a beat as he smiles and spins with the sweat pool below him getting ever larger. 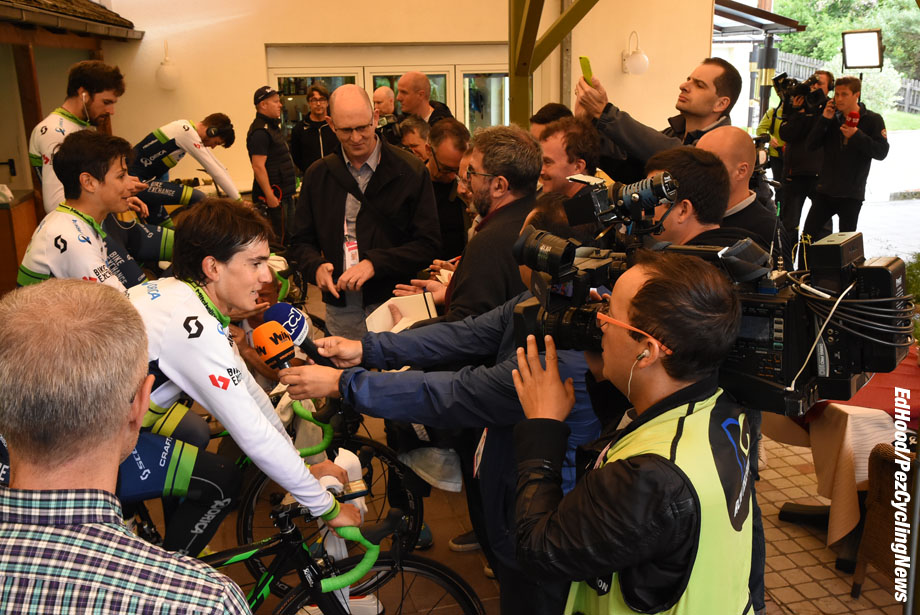 The scrum is a tad dense for us and we forgot to put our steel toe cap shoes on, so with Spanish questioning proliferating we ease back to chat to GreenEDGE’s John Trevorrow – who we interviewed recently on PEZ. 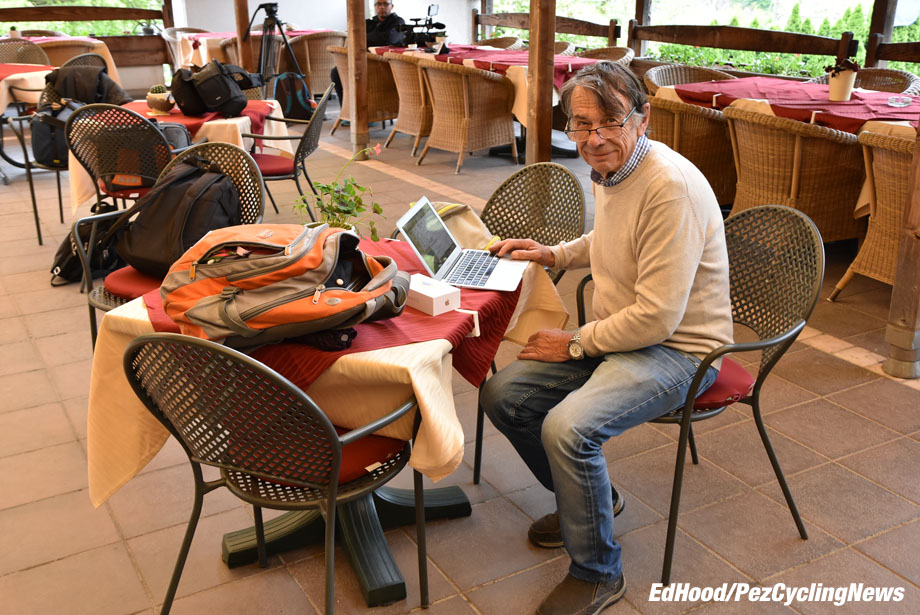 He looks after visiting ViP’s for the team and is a font of knowledge on all things Aussie Cycling. First we ask about young Caleb Ewan, who’s now quit this Giro after coming close to Greipel on Thursday.

John explains; ‘people forget that he’s only 21, he’ll be a big star one day but he has to be given time to develop. And he’s not just a sprinter, there’s more to him than that, he’s the type of rider who could be to the fore in the Classics. But actually in the this Giro, his lead-out man Mezgec is going really well in the finals and with two, maybe three sprint opportunities to come, I could see him winning a stage.’

‘Yes! But it’ll be difficult, the Dutchman reminds me of Cadel Evans, he’s a diesel – Esteban might crack him but it’d be very hard to put those two minutes he needs into him; 30/40 seconds yes but two minutes is a big ask, Kruijswijk will just go into diesel mode and chug along.’

We put it to John that Esteban is always smiling and seems oblivious to the pressures of being a Grand Tour favorite.

‘Yeah, but one of the guys calls him the ‘Smiling Assassin’ – one day they’ll dig all the bodies up! He’s so calm, do you know that after he won the Queen Stage on Saturday he made just two phone calls, one to his girlfriend and one to his dad and that was it, the phone was switched off. GreenEDGE always said they would never buy a GC guy, they would develop one and that’s certainly the case with Esteban.’ 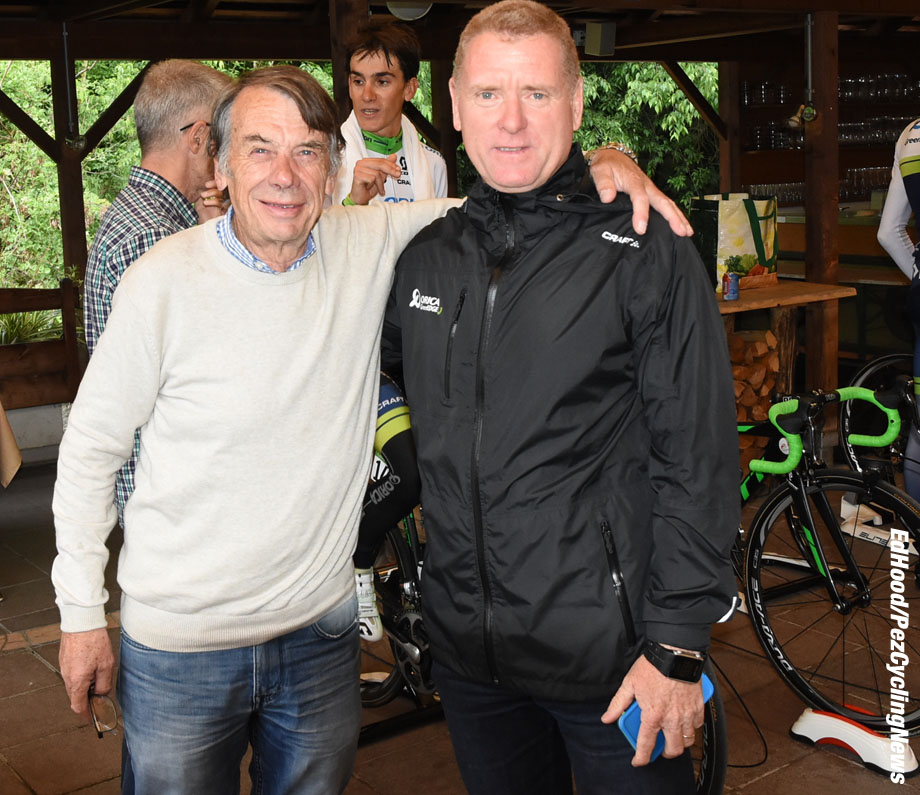 Right on cue, Shane Bannan the GreenEDGE head honcho arrived; we asked why the team had originally picked up on the Colombian.

‘We first had our eye on him when he won the Tour de L’Avenir in 2011, if you look at the results of the L’Avenir over the last couple of decades, so many riders who’ve been successful in it have gone on to do great things in the Grand Tours. Then he was riding for the Colombia team with some success, winning a stage in Burgos and the GP Camaiore – but then he went off the radar after his crash in 2013. We approached him, offered him a pre contract and monitored his progress against recovery goals we set – he ticked all the boxes and we signed him. In 2014 he had stage wins for us in California and Switzerland and he rode the Vuelta. Last year he rode the Giro and then the Vuelta where he won two stages before winning a stage and the GC in the Tour of Abu Dhabi. His development and progress has been steady – but this year was all about the Giro.’

We put it to Bannan that if you look at the Colombian’s palmarès this year there’s nothing to indicate he was going to be a Giro contender with 30th in Tirreno and 48th in Catalunya as his stage race results. 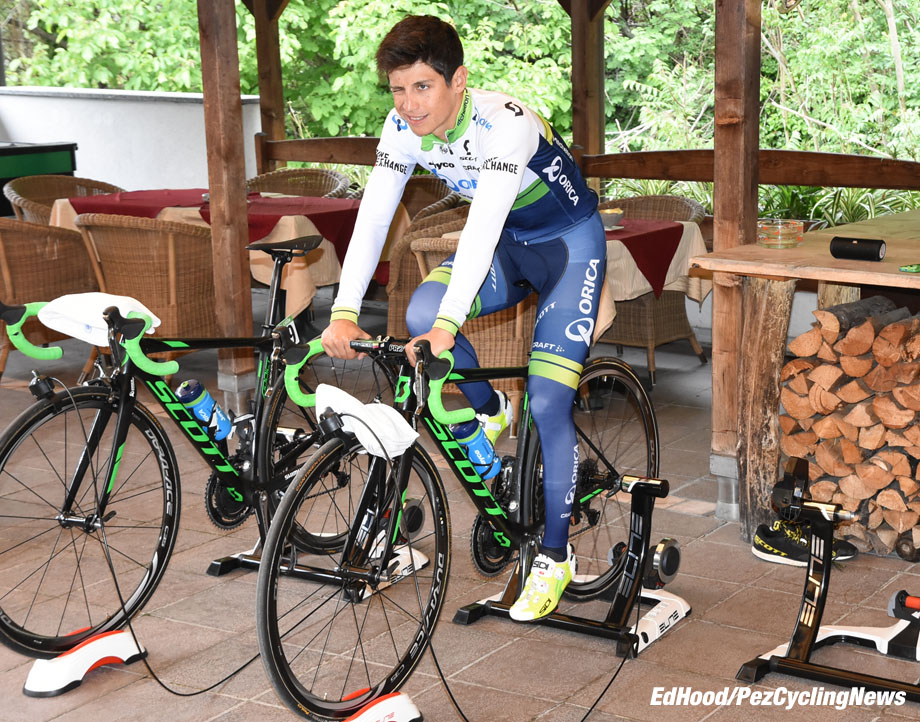 ‘Esteban lives at 2,600 meters and before the Giro put in a four week block of training back home in Colombia; we had a coach with him to drive the motor bike for motor pacing and to analyze his training data each night. Straight after that he came to Italy for two weeks to do the recon during which he rode all of the major climbs in the race – he’s well prepared.’

Well prepared indeed with the Queen Stage to his name and sixth in the mountain time trial. He has six days to wrest the maglia rosa from the square shoulders of The Netherlands, Steven Kruijswijk. It’s going to be an interesting battle and we’ll be right there to keep you abreast of it. 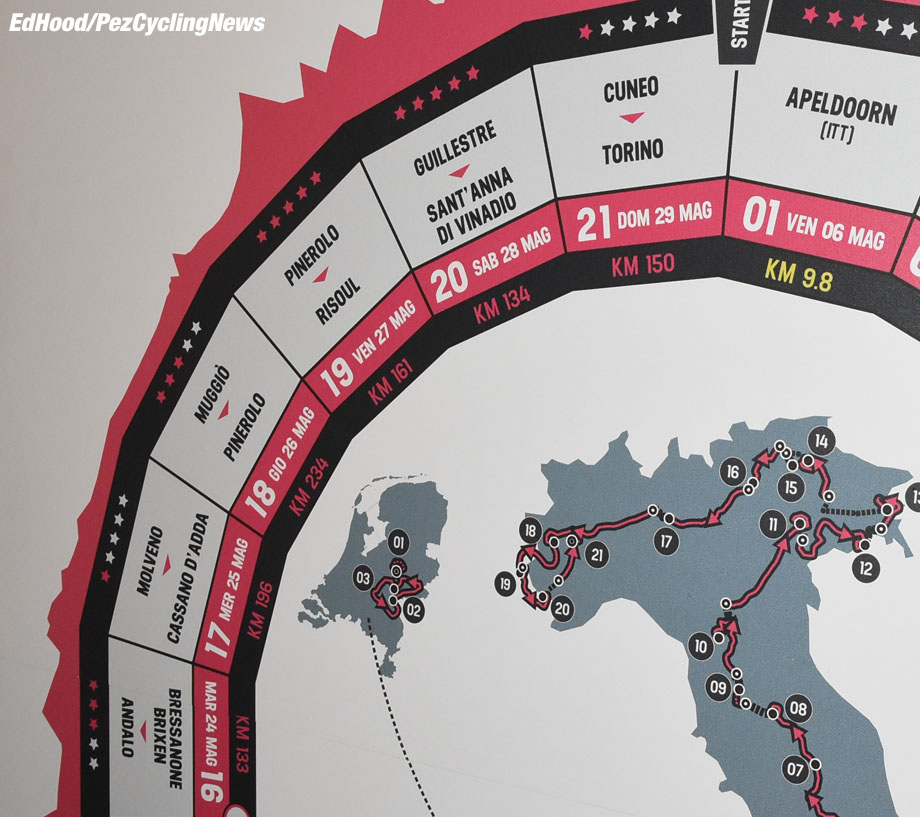 Tomorrow’s Tappa 16 from Bressanone to Andalo over 132K and two second cat. ascents will be the Columbian’s first opportunity to claw back time on Kruijswijk; he needs to find 2:12 and despite the 15% ramp on the Paganella climb tomorrow we rather think that Chaves’s day will be Friday where the race climbs to it’s highest point – the massive 2,744 meter Colle dell’Agnello. But in this Giro, anything is possible.

Ed will be at every stage of the Giro d’Italia all the way to Turin. Catch up with ALL PEZ Giro news here.

Baloise Belgium Tour – Martin Elmiger: “I want to enjoy myself”