PEZ Roadside: The final week of the Giro d’Italia is here and Ed Hood hit the ground running on his first day on the road Giro chasing. Stage 16 may have been short, but it wasn’t short on excitement as the GC men turned the screw for a wild-fire of action. Take it away Ed:

Alejandro Valverde (Movistar & Spain) throws his arms wide then punches the air as he takes his first Giro tappa; Steven Kruijswijk (LottoNl-Jumbo & The Netherlands) is second – that maglia rosa is looking more secure on his square shoulders by the minute and Ilnur Zakarin (Katusha & Russia) is third. 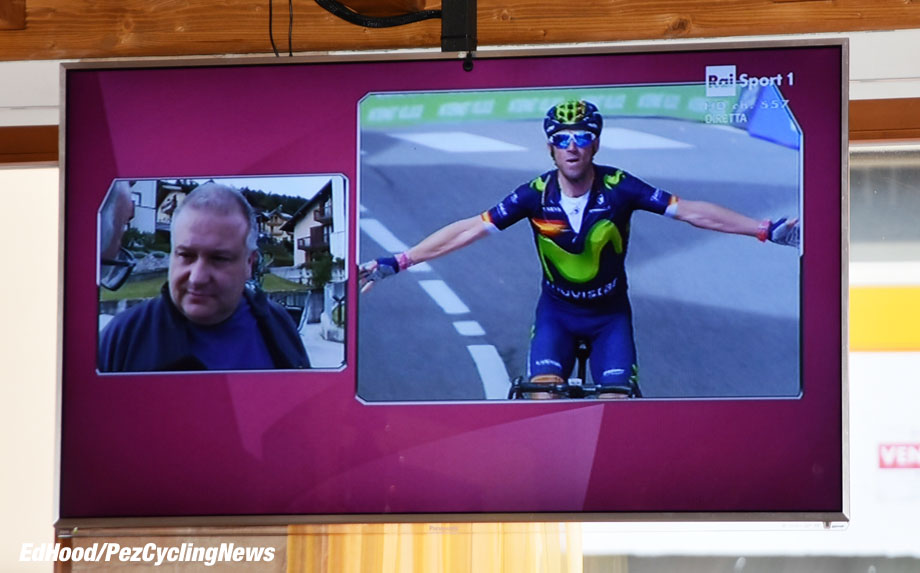 A good day for the Spaniard and Russian, up to third from fourth and sixth to fifth respectively. But if there are guys on good days, there must be guys on bad days: Nibali (Astana) drops third to fourth and Majka (Tinkoff) drops fifth to sixth. 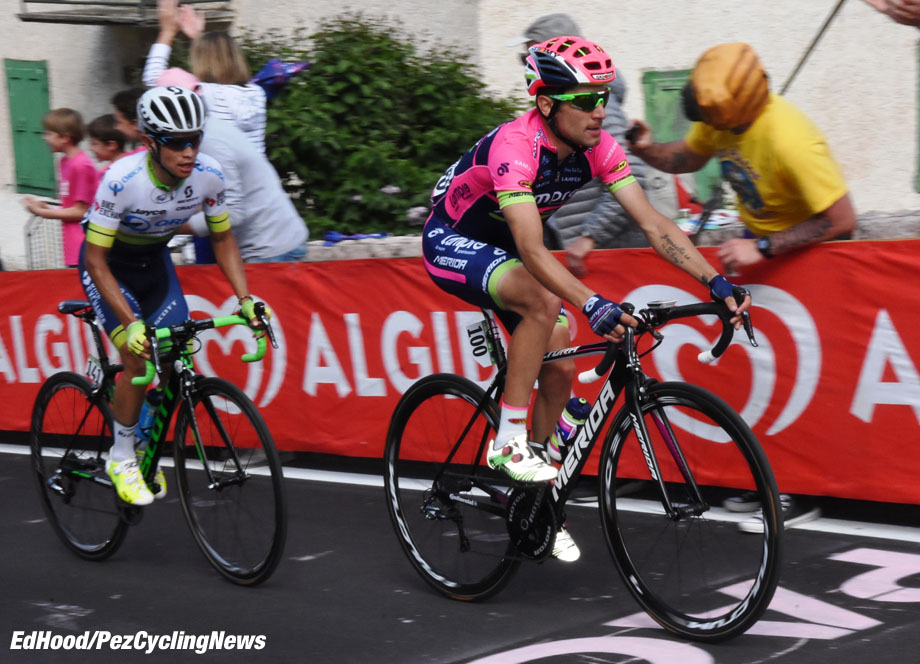 But the most significant result is that ‘Queen Stage’ winner Chaves (GreenEDGE) whilst remaining second has given away 48 seconds to the Dutchman in pink. He came up off the leader’s pace on Ulissi’s wheel.

We’re in a bar (where else) in Fai della Paganella watching the finale of Stage 16 on the TV. We’d watched them approach on the TV then dived outside as the drama unfolded live just up the hill then sprinted back in to watch the finale. 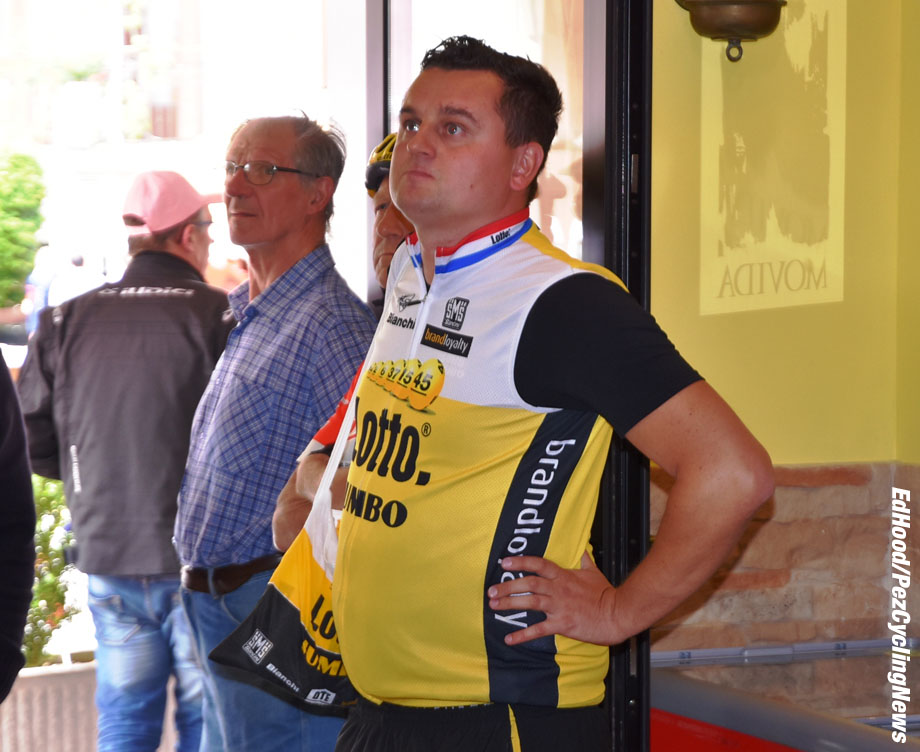 When we were watching the riders approach on TV, the LottoNL-Jumbo soigneur dashed in to see what was happening then flew back out to hand up bottles with a big smile on his face. It wasn’t a long stage at 132K but this morning seems a long time ago. . . 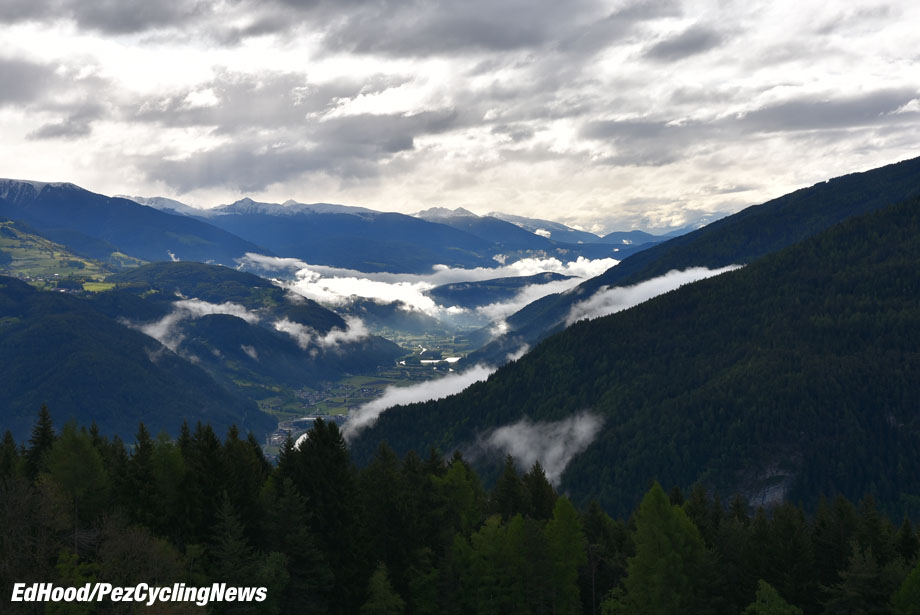 The views from our hotel are amazing but because it’s out of season the heating’s not on – last night we had to sleep fully clothed. Still, breakfast was good, again and the views on my morning walk were breath taking. First up, head for the start, and get the lay of the land. 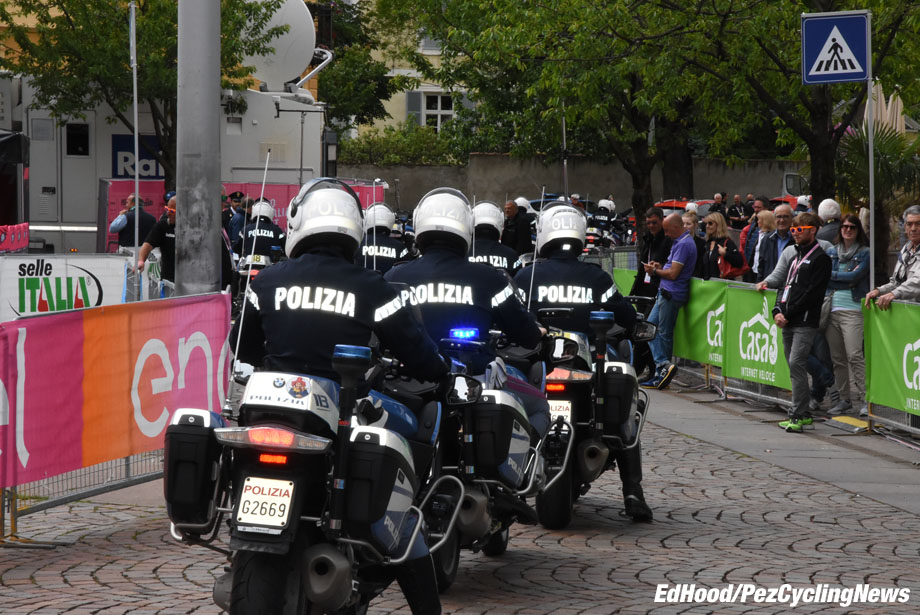 We arrived at the same time as the police – there’s never a shortage of moto cops at the Giro. Priorities – a Gazzetta and a beer. 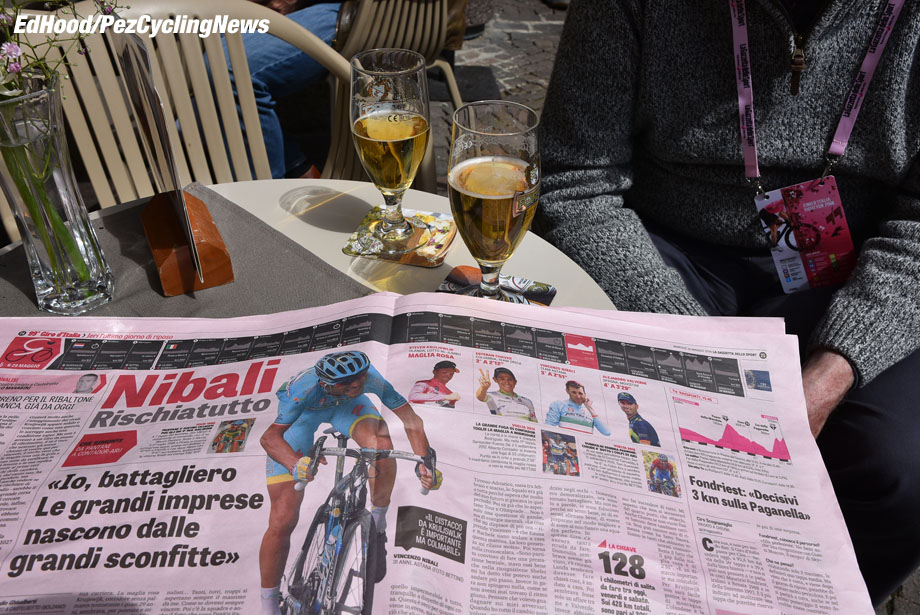 Former world champion, Maurizio Fondriest reckons that the second of today’s climbs, the Paganella could be decisive. We watched an interview with Valverde the other night where he said that he reckons both of today’s climbs; there’s the Passo della Mendola as well as the Paganella, whilst categorized second should be first or even ‘hors’ cat. they’re that tough. The Giro doesn’t have a ‘village’ like le Tour but there’s an interesting array of stands publicizing all manner of things, from insurance companies to Pinarello bikes. 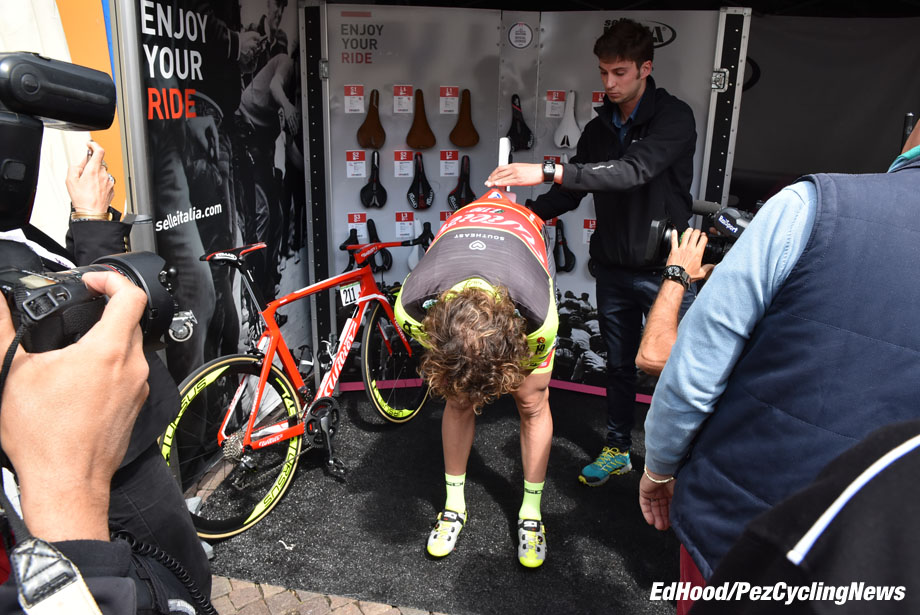 And Sella Italia saddles – where ‘Pippo’ – the ever popular Filippo Pozzato (Wilier-Southeast) was put through all kinds of compromising positions to measure him for his new perch. We stroll towards the sign on and the race caravan is mustering – not as mad an affair as the Tour caravan but pretty lively, nonetheless. 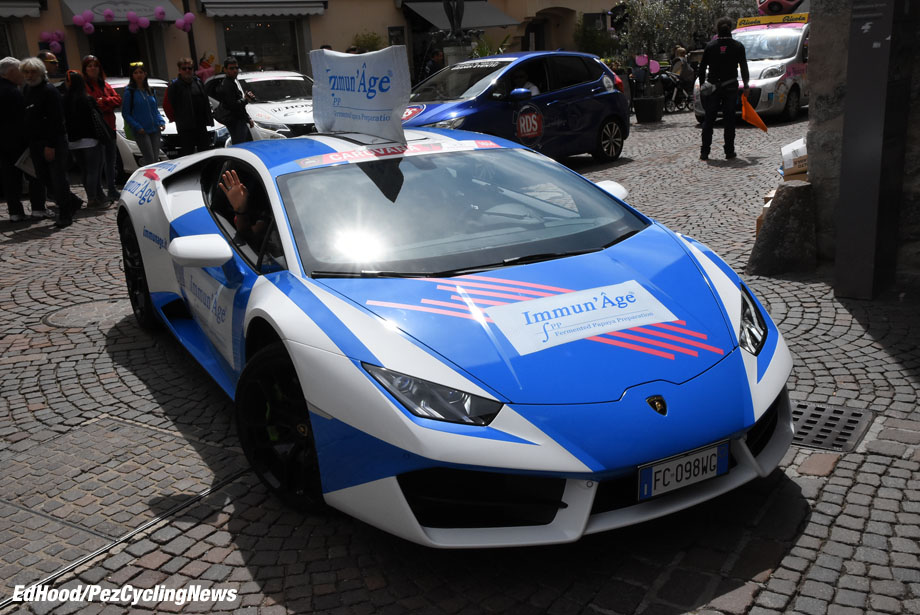 And for the, ‘only in Italia’ file there’s a Lamborghini in the convoy. 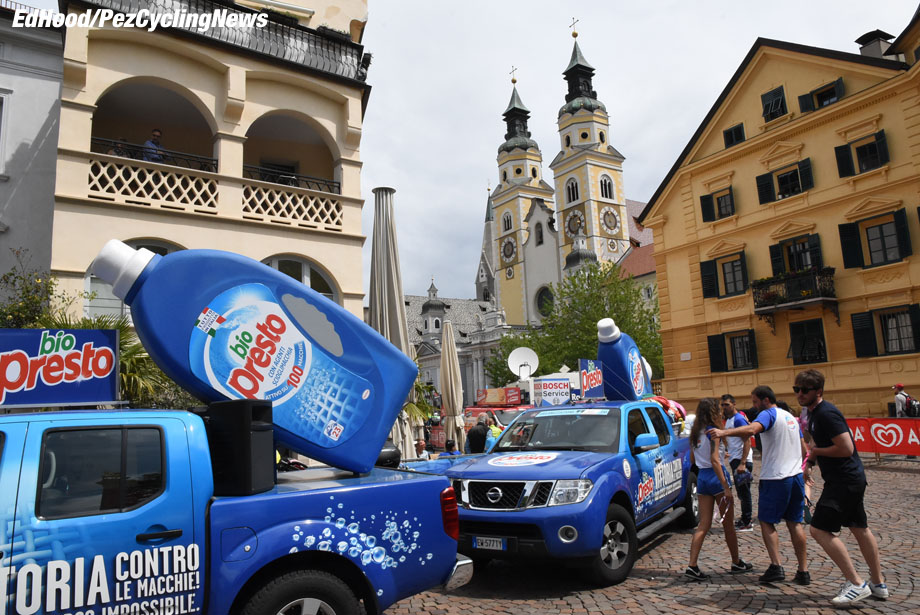 The muster is in front of the lovely Duomo in Bressanone; the sight of giant canisters of washing powder parked up in front of the spires with big tunes banging out of the PA is all a tad incongruous – but hey – it’s The Giro! 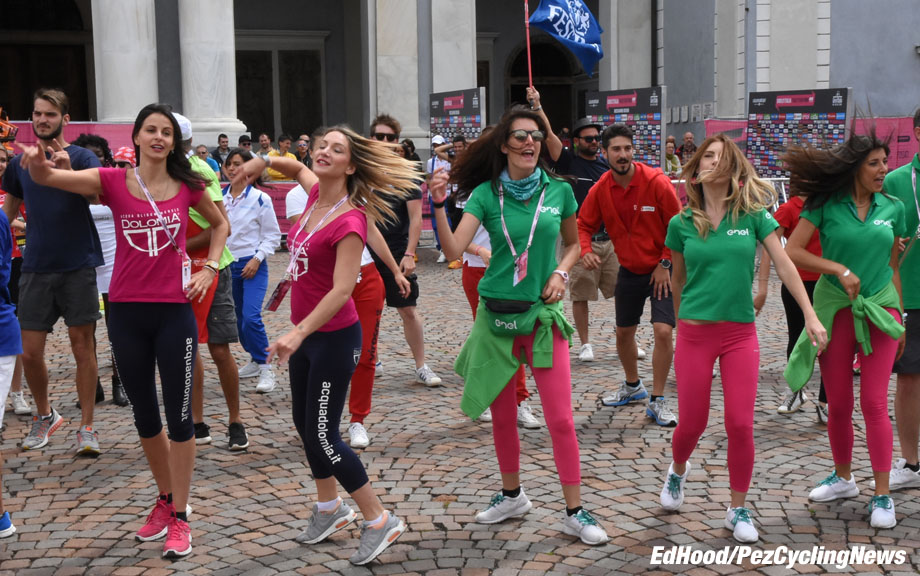 And then there’s ‘The Caravan’ dance routine. . . The caravan kids bolt, the decibels subside and there it is, what it’s all about, the trofeo. 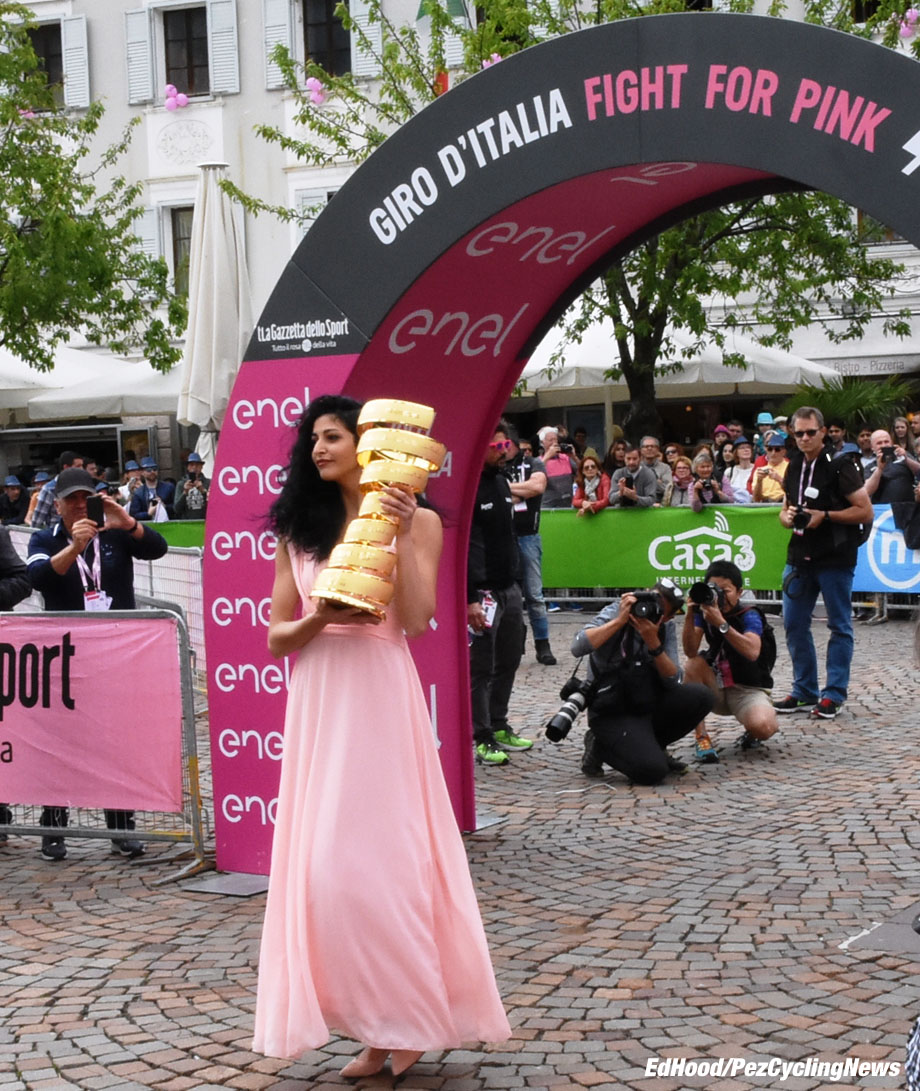 The Goddess brings it through the arch into the sign-on area then places it lovingly in pride of place – the trofeo is so beautiful it deserves two pictures. 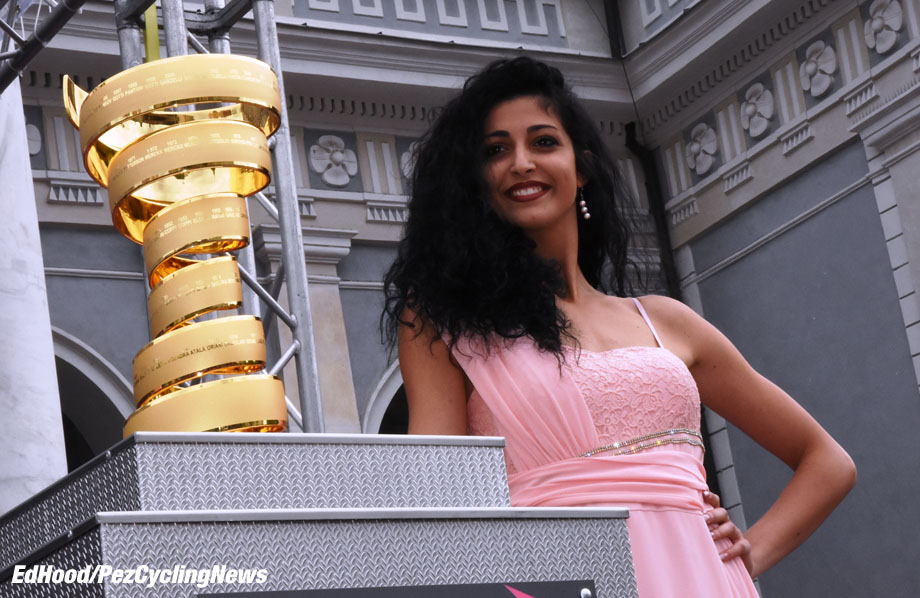 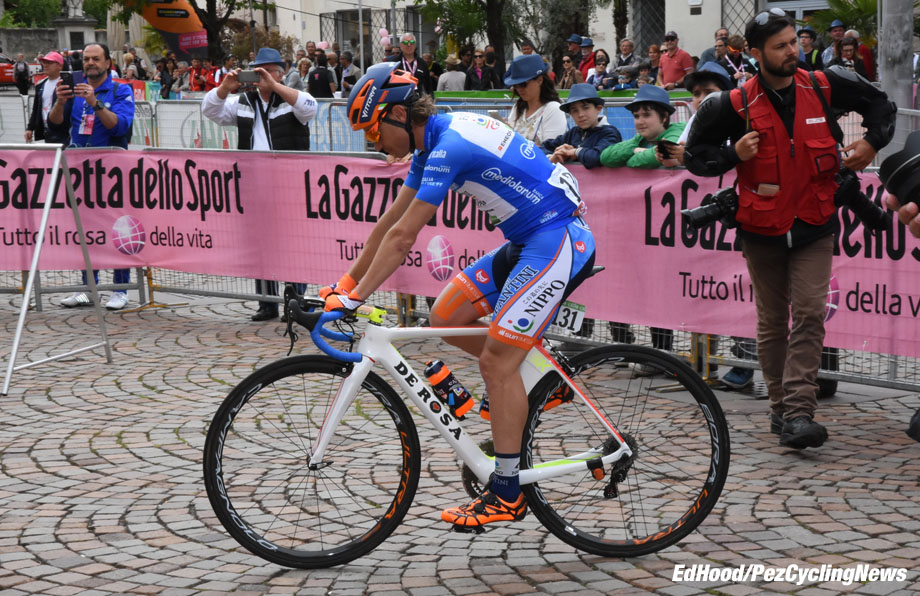 Damiano Cunego is perhaps a bittie too old to be a “Little Prince” anymore but he’s still very popular and his tenure in the ‘Montagna’ leader’s jersey is a huge result for his Nippo-Vini Fantini team. 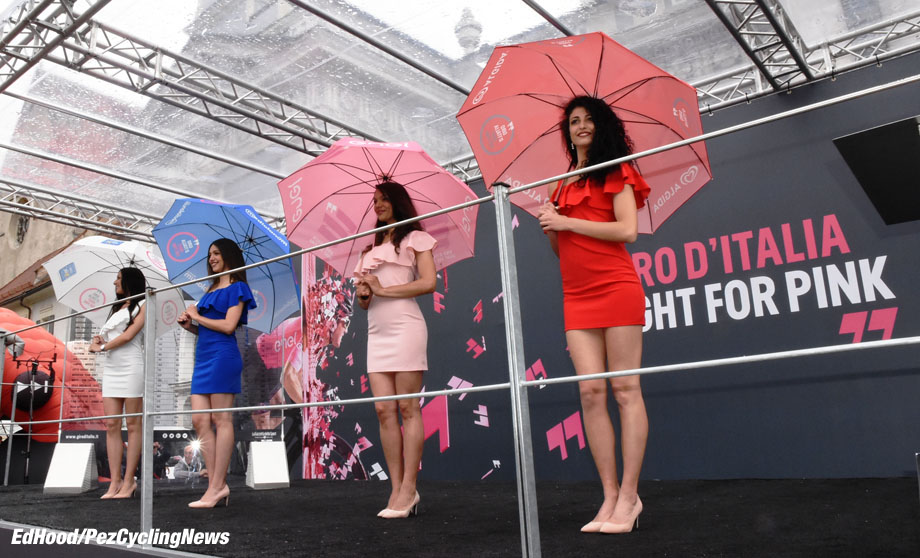 And on the subject of jerseys, more Goddesses, this time dressed in the colors of the race’s four jerseys; pink for GC leader; red for points; white for young rider and blue for mountains. The young ladies are all chosen for their personalities – naturally. . . 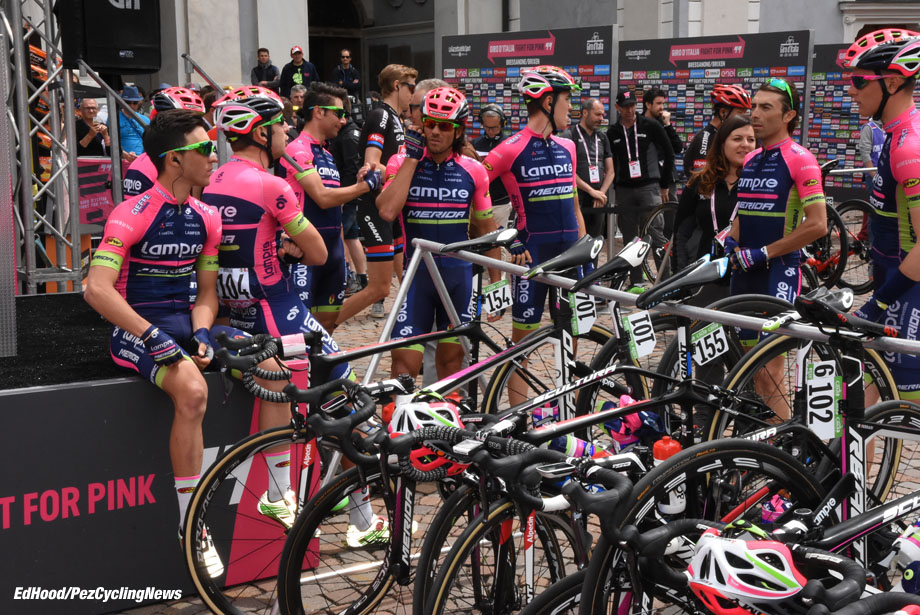 The sign-on continues; here’s Lampre; two stage wins for Ulissi so far – not a bad Giro at all for the boys in pink, blue and just a little lime green. It could yet get better. There are two maybe three opportunities for the sprinters and Lampre still have Modolo and his mad lead out man, Ferrari in the fray. But it’s not a day for them, today. Gruppetto!

Time for us to go, we’re headed for the montagna. Nibali and Valverde pass as we walk back to the car; Vincenzo looks relaxed, Alejandro is serious, he’s even shaved. 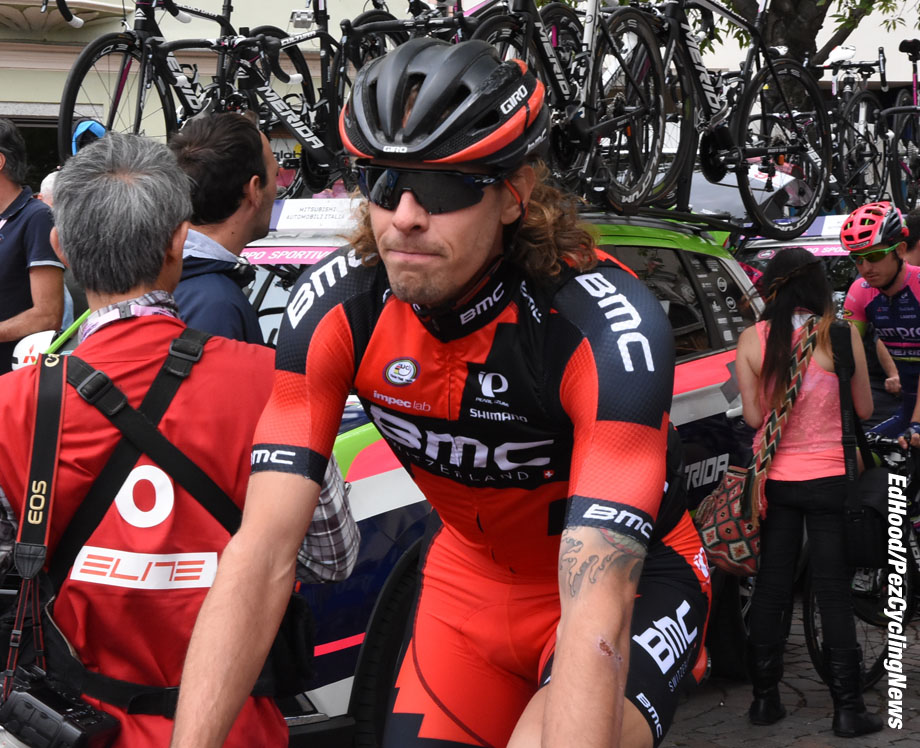 And there’s Oss, looking almost as hairy as Ferrari. 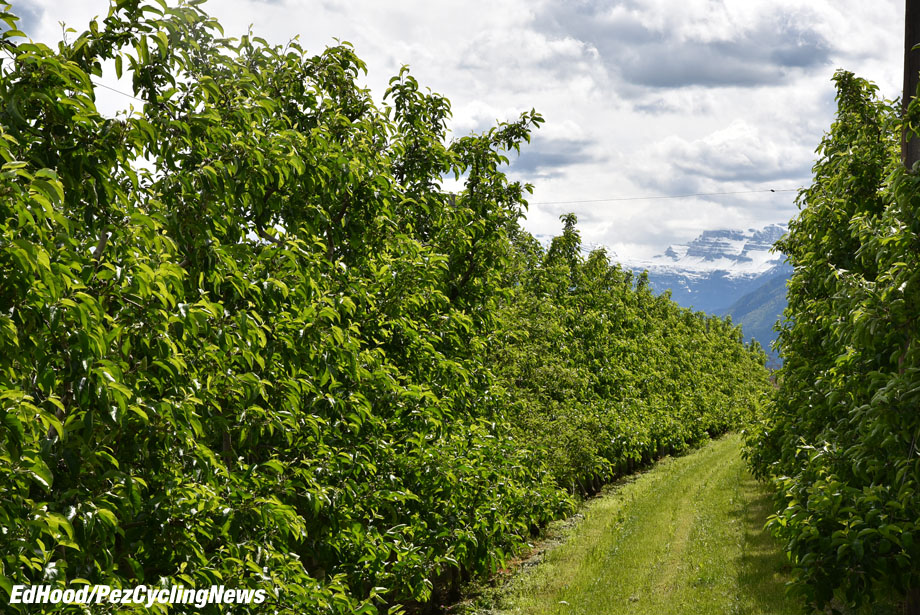 The descent off the Mendola is long, long and technical through endless orchards & vineyards – very stressful but it’s dry and the surface is good. The Paganella comes all of a sudden, hang a right off the valley road and ‘bang!’ It’s long and tough.

We park up just before the 15% section and walk up – it’s tough to walk it after a day in the car never mind after 120K at warp speed. Our ears, through long years of training are tuned to pick up bike race commentary on bar room television sets – Dave guides us in. 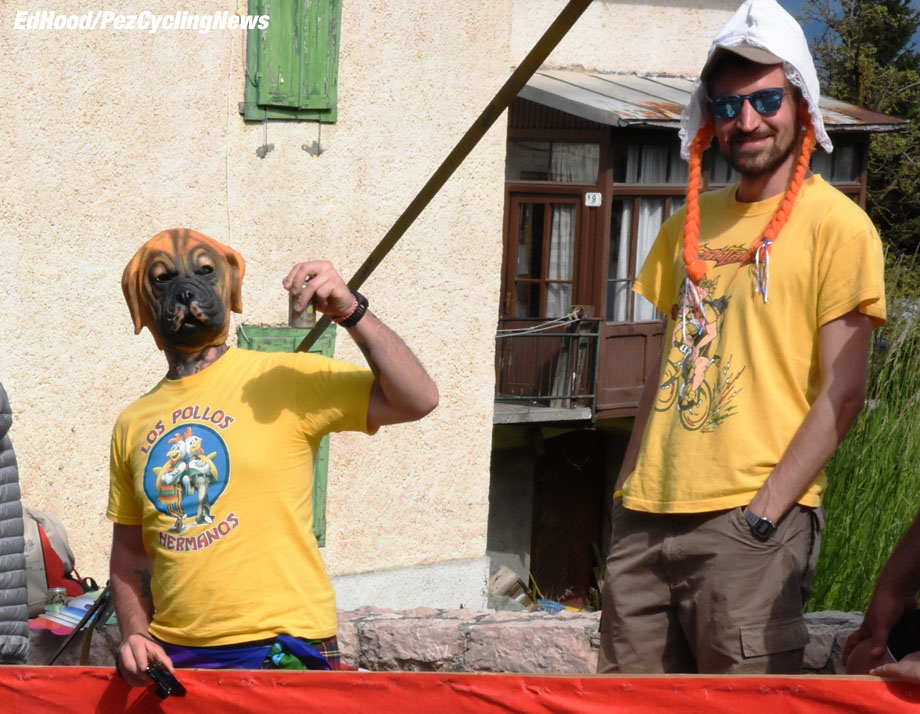 We dash outside, strangely a very clever canine is watching proceedings – and ‘woof!’ to you too, Rover! 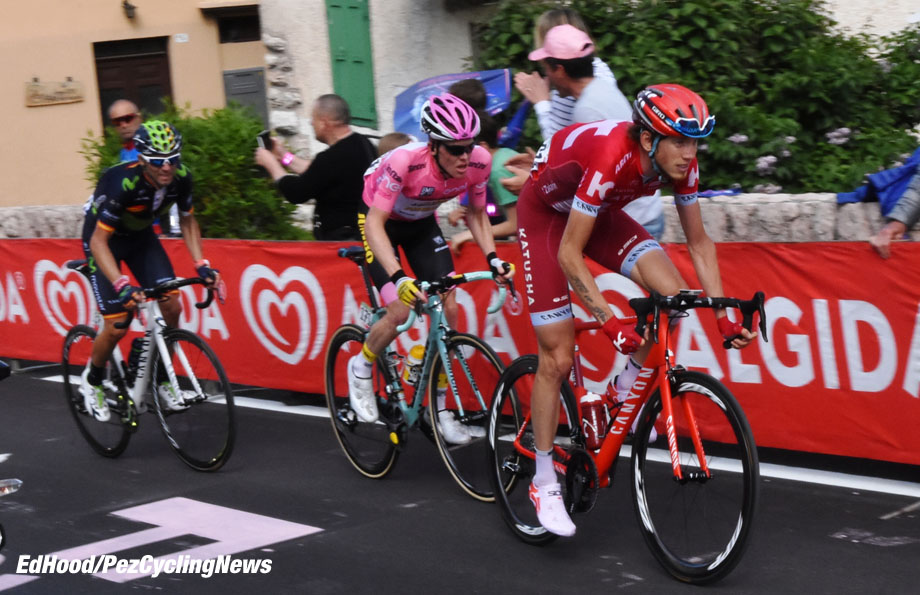 Now comes the serious stuff, Zakarin is driving hard, he wants the time, so does Valverde but he’ll want the stage, too. It’s a ‘sore one’ for Chavez and Majka but a real bad day for Cannondale’s Rigo Uran. 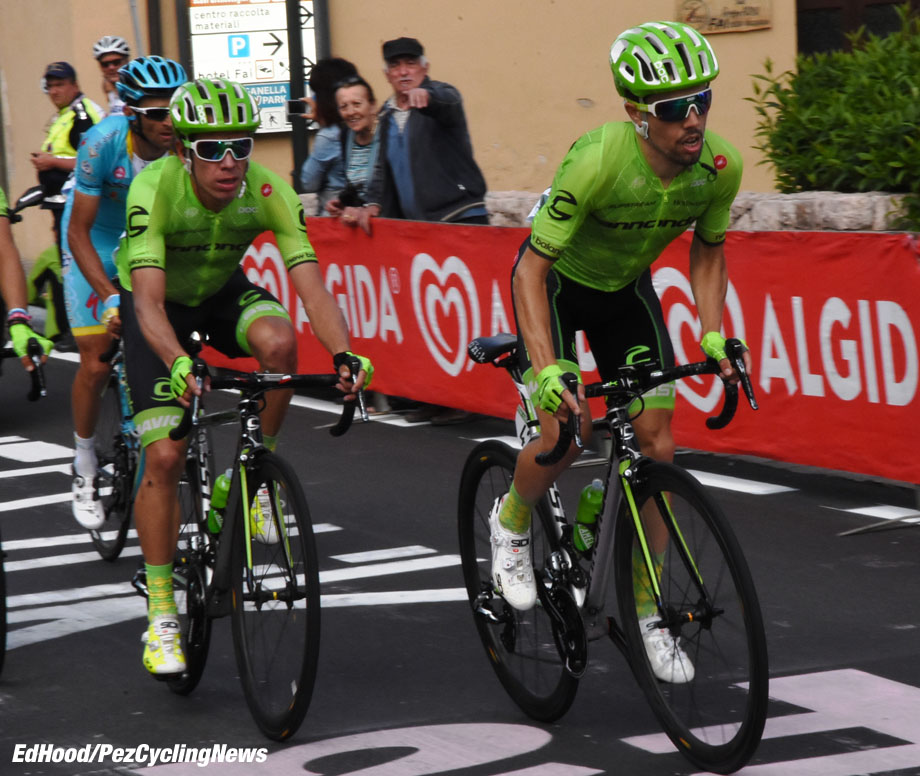 He has domestiques with him but is way off the pace – is it the disaster it seems or is it deliberate to give him room to attack on the last two days in the mountains? There are maybe 10 different groups on the mountain, a bit of a plane crash. 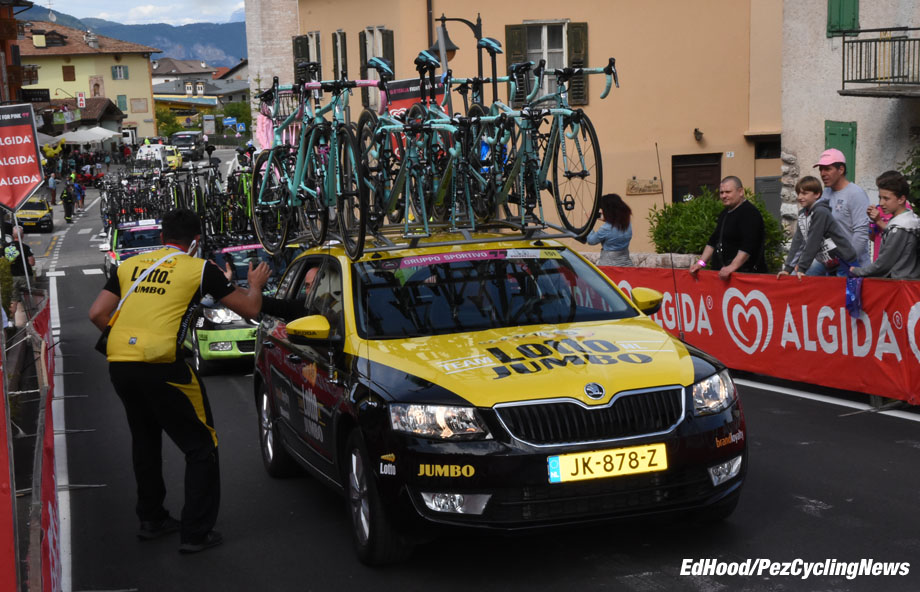 But not for Kruijswijk – it’s hand shakes and smiles all round in the Jumbo camp. 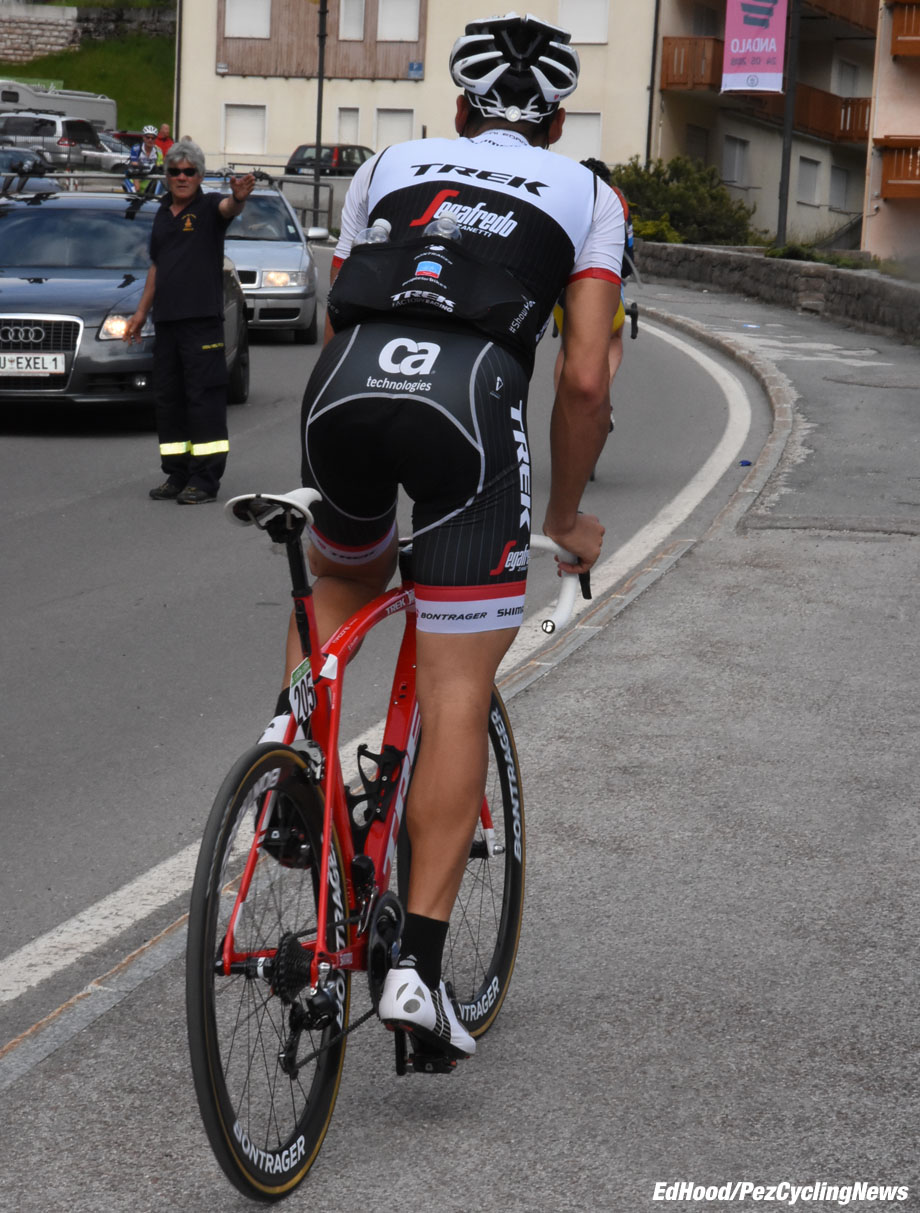 We get back to the finish town of Andalo – there’s the usual traffic chaos and Trek’s Coledan almost runs me over as he takes to the pavement to get back to the hotel, a shower, a massage and a meal.

This Giro is many things – but boring isn’t one of them!

Here’s hoping for heating in the room tonight.

Ed will be at every stage of the Giro d’Italia all the way to Turin. Catch up with ALL PEZ Giro news here.