PEZ’s German Homeboy, 20-year-old Dirk Finders, has had a remarkable start to his season in the U23 ranks. During a successful weeklong race trip to Italy this month, Dirk went on the attack, chalking up some impressive finishes despite a broken hand. Back home and sweating over an indoor trainer, Dirk checks in.

“Settimana Amatoriale” in Laigueglia / Italy
– I have a lot to tell you about this time. During the last team training session before my journey to Italy, I had two falls and in one, I broke two bones in my hand. Nevertheless, I did the races in Italy with the pain. 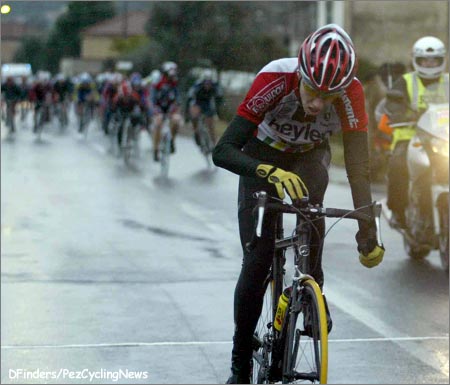 Even dying light and falling rain couldn’t dampen the thrill of Dirk’s win on stage 1.

At the moment, I can only train on my home trainer because of my hand. But that is not very troubling because most of the roads here are icy. Recently I have visited several doctors and had a special radioactive x-ray. On Monday, we will decide if my hand has to be put in a cast.

Here are some of my race diary entries:

Back to Front
Jan. 29, 2006: The first day of competition was a rainy day and 8° Celsius (46°F). So I decided to sit in the car until the start and got to the start line 30 seconds late. So I had to chase the bunch and caught it after 3 Km. I decided to go to the front of the bunch immediately because the streets were slippery with rain. At the front, I didnґt hesitate and I got into some attacks, but they were all neutralized. With 7 Km to go, the bunch took a nap and I attacked on a little hill. My attack became a 13-second lead and at the finish line, I was 20 meters in front. So my first race this season ended with a first place, also putting me first in the overall rankings. 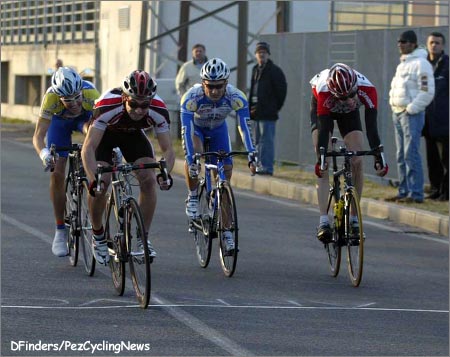 Dirk on the right sprinting for the win.

Jan. 30: The second day of competition was dry and at 13° Celsius (55°F), a little warmer. The course was much more hilly than the first day. I stayed in the front of the bunch for the entire race. The first climb was 15 Km long at 4%. So the 140 riders in the bunch stayed in one group. With 150 meters of climbing left, there was a good attack and I went with it. Our group took 2 minutes and was never seen again. On the last climb, which was 5 Km long and about 8%, the 25-man group broke up into some little groups and I sat in the first of these with six others. In the end, one other racer got away and I had to sprint for second place, which I won. I stayed in the lead overall.

Return of the sun!
Jan. 31: A very nervous race at 22° Celsius (72°F) and sunny in the mountains. The bunch was very compact and there was a field sprint, in which I got fifth. I lost my first place in the rankings, moving down to second.

Feb 1: My favorite day, with five laps around a valley and a final climb of 8 Km. In the valley, the bunch of 125 racers was compact and I had to work hard to stay in front until the beginning of the climb. On the climb, I got into the first 15 places, a really good position. More and more riders dropped off because of the speed on this hill. On a very steep section, the race leader attacked and got a 20-second lead. I had to react and attacked 2 Km before the top. I took 15 seconds and was nearly at my limit. But 100 meters before the finish, the 20-man bunch caught me and I finished fifth, keeping me second in the rankings.

Feb. 2: A flat circuit with a lot of wind. 23° Celsius (73°F). I got in front with another seven riders. We took 3 or 4 minutes and sprinted for the victory. I got second, but fell to third in the rankings. 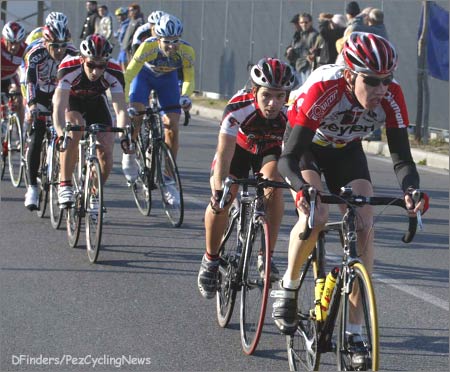 Dirk doing the work: towing the break and suffering like a champ.

Attack to the end
Feb. 3: The last day, I had to attack and take my chances. At the start of the first climb of 25 Km, I was alone out in front with about 1_ minute lead. In the middle of the climb, a group of nine riders came up to me. After 4 Km, I had to drop from this group and was 30 seconds behind at the top. On the downhill, my broken hand gave me some problems, but I did not lose much time and was caught by the next group. On the last hill of 3 Km, I caught back onto the first group but in the end I got 5th and ended up 3rd in the final ranking.

Here is the final ranking of the guys who collected points:

Stay tuned for more of Dirk’s insider scoop on U23 racing, and check him online at:
• his personal website: DirkFinders.de.tc
• his team websitePesantliege.be