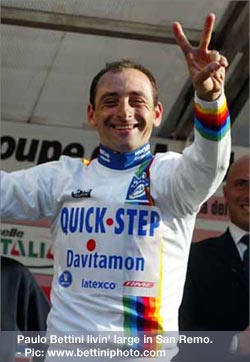 It was a great day for the home riders, who filled the top 5 places, but not such a happy 36th birthday for Mario Cipollini – the favorite just failed to repeat last year’s win.

Once again, though, a triumph for the team which grew out of the old Mapei squad, and who have multiple chances to score further Classic wins in Belgium and Holland over the next month.

The race followed traditional MSR patterns, with an early breakaway staying clear for around 240km (!!), and then multiple late attacks. But for once, the template was thrown out of the window, as the sprinters’ teams lost their grip on the race at the last gasp.

As most would have predicted, Jacky Durand was in on the early action, moving clear with 8 other riders (best known of whom would be Team Coast’s Niki Aebersold, making the most of his squad’s return to the peloton!)

By the time they reached the Turchino Pass at more or less half-way, they were being held at around 4 1/2 minutes by the main field, with Rabobank, Domina-Vacanze and Quickstep principally controlling things.

The 9 man break gradually began to falter and splinter, as the effort took it’s toll, and after a mammoth attempt at staying away, beginning around kilometre 7, the last 2 men (Aebersold, and Peter Wrolich of Gerolsteiner) succumbed at kilometre 260. Almost immediately, the fireworks began as the race powered up the Cipressa…….

……… Celestino jumped hard with Ag2r’s Botcharov, but they were immediately countered by Bettini, Vinokourov, Friere and Rebellin, who moved clear with 25km to go. They never got more than 20 seconds as Celestino got back up to them. Bettini had another go, before Domina Vacanze pulled the race back together ………

………only for Danilo Di Luca to give it everything up the Poggio! He had a gap heading for the top but was chased by Andrea Peron (CSC) and Serhiy Gontchar (De Nardi).

Now came the defining moment as 2 Quicksteps shot up to Di Luca – Bettini on the move again, and Paolini, with the equally active Celestino. Di Luca ran out of gas, though, as they hurtled off the Poggio giving it everything onto San Remo’s now famous Via Roma.

In the finale, a jubilant Bettini motored to an easy sprint win over Celestino and Paolini, as the bunch chased in 11 seconds behind, Cipo’ getting the better of the other sprinters.

Sadly, we were denied the opportunity of seeing the hottest property in pro cycling, ‘Pippo’ Pozzatto, taking on Cipo’ as he crashed out descending the Poggio. Also going out earlier than planned were Alessandro Petacchi (off form) who completed a pretty miserable day for Fassa Bortolo.

Sadly, we saw a rider taken away in an ambulance. With Andrei Kivilev’s death such a prominent recent memory, Domina Vacanze’s Martin Derganc came down 45km from home and was taken away in a neck brace. Luckily, things don’t seem to be as bad as we first feared, as he’s reported to be conscious, but has probably broken a collarbone.

What a start to the World Cup campaign for Bettini, who must be confident of retaining his white jersey with those nifty vertical rainbow stripes all the way through to the Giro di Lombardia in October. There’s practically no Classic he isn’t capable of winning, so his main rivals will probably be his own team-mates who’ll have their greedy eyes fixed on Roubaix, Flanders and Liege.

Check in later at PCN for race pictures from Roberto Bettini.

Photos courtesy of Roberto Bettini. Check out his website for more race pics.

——————–
Special Thanks To Roberto Bettini – www.bettiniphoto.com – Visit his site for more cool pics.