Ah yes. It’s that time again, sports fans. The time when we racers, from the high categories to the low, can ease back on the training throttle, give more juice to the eating throttle, and kick back and enjoy the bike without the snot rockets and twisting insides. In the MidWest, we celebrate this new season with the annual Chort Ride.

What’s the Chort Ride, you ask? Well, it’s an annual, come-one-come-all celebration, ride traversing northern Illinois and southern Wisconsin, with an overnight stop in lovely Lake Geneva, Wisconsin. It originates in Crystal Lake, Illinois, and zig zags its way north to the Wisconsin border via several towns, and strategically placed rest stops. Which, by this time of year, are bars.

Some riders are at massive charity rides doing hundreds of k’s. Some are deep into CycloCross nuttiness, but not this intrepid author and his merry band of pranksters. Oh no, we’re bellied up to the bar, drinking cheap beer, telling tall tales of another season gone, and trying to pack on winter weight before the onslaught of sub zero temperatures. This is The Chort Ride, folks. Get in, or get out of the way. With having accomplished riders in some form or another, we had road bikes, ‘cross bikes, single speeds, a fixed gear, and a healthy urge to destroy everything!

The ride began on Friday night, technically, with a bevy of friends from Minneapolis and Chicago descending on my humble abode in Milwaukee, Wisconsin to have a pre-ride party. This of course involved the golden liquid we call Pabst Blue Ribbon at any of Milwaukee’s fine, fine taverns, and some sight seeing on a fun night ride. Somehow, most of us miscreants ended up at a quizzical place known as Mad Planet, where the weekly 80’s night Dance Party was in full swing. I was told in the morning that I was out on the dance floor; proof I had had one too many beers. I apologize for the people I subjected to my spasmodic idiocy. It ain’t pretty, I know.

The weather for this year’s Chort Ride was perfect. Just perfect. After a squinty drive to Illinois a little too early on Saturday morning, we were suited up and on the road under delicious 60+ degree temps, sun, and a good breeze. Off to Woodstock, Il, to see Pam the bartender and enjoy a Bloody Mary at Duffy’s. For you non-midwesterners, it is customary to enjoy a beer back with your Bloody Mary, and typically it’s putrid draught swill in a tumbler. This was no exception. We quaffed stiff Bloody Mary’s complemented with tap Miller Lite from (I think) the Pleocistene era on the backside. Hey, who am I to complain? Suffering through a racing season is one thing, this is cake compared to a hard crit!

Up the center of the state we continued, winding through lush autumn vegetation and small town bars. A late start ensured that the lovely town of Zenda, and subsequently the Zenda Tap, would have to be omitted from the schedule. Instead we plowed on to the southern outskirts of lovely Lake Geneva, where we found Skinny’s, a biker bar. Um, not the kind of bikers this story is about. We were in black, they were in black, but theirs was leather and ours was lycra. They use motors, we do not. What could have been a mildly uncomfortable situation was quickly turned positive by a few rounds of beers and proclamations of “two wheels, one love”. Whew. Good thing four of our guys are six-foot-four or taller. That might of helped as well. 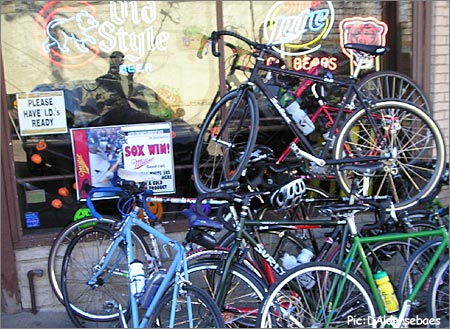 To our lovely camping estate (read: roadside hotel/motel bungaloes) for a few beers and on-site chinese food (sort of, anyway) and it’s off to bed. We had 50 miles and several bars to hit the next day.

Sunday found us again under delicious skies for late October, and we set out southbound, winding our way along the Illinois Wisconsin border. To bars, we say! To bars! But first, a nifty little estate sale. I mean, a huge packrat farmhouse where everything is for sale for pennies on the dollar. Of course, by the looks of some of the stuff it was pennies on 1948 dollars, but what the hell.

Some jackets were purchased as Chorters fumbled through all their belongings, a playing card (“Afraid of Robbers – Lose a Turn” – Can anyone tell me what board game this card is from?), some other odds and ends: gnomes, a chainsaw, an old wooden box, and it was off to Barry’s Bar in Genoa City. Make your own Bloody Marys and have a PBR on the back, shoot some pool, go back to the make your own bar. Run around outside under the sun for some more fun. Then, it’s back on the steeds for the remainder of the ride home, with a few more stops along the way. Once again, the trusty Lunatic Fringe was never far behind in the support vehicle with snacks and layers if a rider needed it.

Ah yes, the Chort Ride. Sure to be back in 2006, so if you’re in the midwest, and this is something you feel like doing to blow off steam after a long season, then by all means contact me. If you are into low speeds, fall colors, and occasional beverage or two, and the great comraderie of some of cycling’s weirdest heroes, then the Chort Ride is for you!