Inside Lombardia: A Day With Dunc!

ATTENTION PEZ READERS: This is a great story – and well worth the read! – Ride along with Dunc on another unforgettable day in northern Italy! The Giro di Lombardia gets a full “Slam-Dunc” as only PEZ can deliver…

The Giro di Lombardia… is for pro cyclists like it was for us on the last day at school!! Everybody is happy, cyclist’s, press, photographers… even Ivan Basso was all smiles and I don’t see that often! As the final round of the World Cup, and end of the season, it really is a special day. 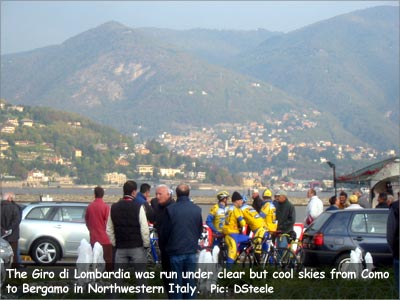 The Giro di Lombardia is a great race but TOUGH. It starts in the beautiful town of Como on Lake Como, heads up between the “legs” of Lake Como between Como and Lecco (which is real cycling country) to Bellagio where starts the climb of the Madonna del Ghisallo! This climb is tough (parts hit14%) and at the top you are rewarded with a great view of Lake Como and little church Madonna di Ghisallo – the patron saint of cyclists (really – we actually have a patron saint!) that is a museem for Cycling where you can find the bikes and Jerseys of great champions, past and present. 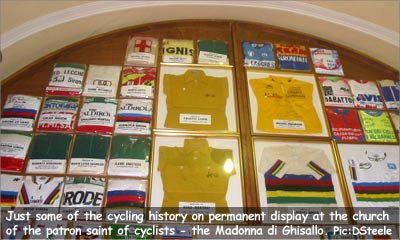 The race continues through the rolling hills towards Bergamo, up through the old city to Bergamo Alto, with it’s cobbled streets making the climbing tough and uncomfortable, down the otherside for the finish in Bergamo city centre! 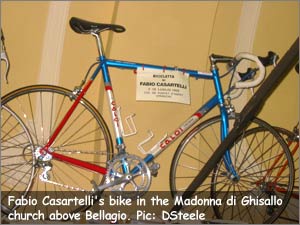 Fabio Casertelli’s bike from his fatal accident in the TDF when riding for Motorola with Lance Armstrong and our Andrea Peron.

So, to make you readers happy (and I do make you happy don’t I??) I woke up early on Saturday morning and joined Marco Bruns, the owner of A-style clothing company, in the official A-style car (Andrea Peron is an A-style athlete, check his helmet out) to follow this great race which you’ll know by now was won by Michele Bartoli. 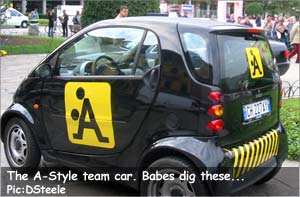 At the start we got a few coments and I noticed a few things. The first was that nobody (journalists/photographers) really took any notice of Michele Bartoli when he arrived to sign in… except me of course. 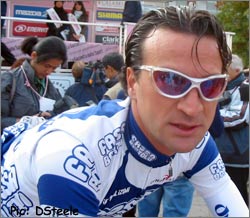 Pez: Michele…wait! Just a photo and a few questions!
MB: Sure. (laughing slightly looking at my A-style t-shirt) great T-shirt!

Pez: Michele, this is your race, you have always done well in it, winning last year… and you are in great shape?
MB: This is my World’s!! I was a bit disappointed not to go to the World’s, but I accepted Ballerini’s decision. This race I love, it’s selective and if you are not in top form, you get dropped.

Pez: Who do you see as your danger men?
MB: I don’t know, let’s see how well those who raced the World’s have recovered…but Celestino is going well.

Pez: Michele, can you touch your toes without bending your knees?
MB: Eh?

Pez: I’ll be asking for a demonstration another day, so hope your aren’t telling me porky’s!!?
MB. No No No…it’s the truth!

Pez: We wish you a great race,
MB: Thanks. 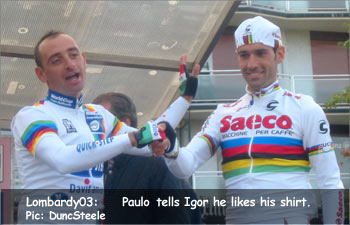 Astarloa arrives with a smile longer than Lake Como. It was the first time he was racing with the title of WORLD CHAMPION. He said “I feel a bit tired from all the events and promotions that go with being a new World Champion but feel very very happy. I’m happy that I can finally race with this Jersey, it’s a nice feeling!”

Pez: Have you cleared up your little problem with Bettini?
Astarloa: Oh yes, we have spoken and it was a mis-understanding. He is a friend and a great rider.

At this time Bettini arrives to sign in and comes over to shake Astaloa’s hand… with a smile he whips Astorloa’s cycle cap off , with the World Champion colours on it, Astarloa’s head and puts it on!! With a laugh he says “He was the better rider on the day so deserved to win”

Pez: Astaloa says that you have cleared up your little problem?
Bettini: Wasn’t really a problem in the end, just a mis-understanding.

They must have spoken as they said exactly the same thing!!!

Pez: How are you feeling, and what are your intentions today?
Bettini: Well I want to race well today…like every day! I feel more relaxed now but a bit jet-lagged, I’ll see what “feelings” I get in my legs to understand what I’ll do today but I still feel in good shape.

Pez: And for next year, especially the World’s that are in Verona.
Bettini: I haven’t given up on winning the World’s but I have to ride better than everybody all next year to gain the faith of Ballerini, if not then it will be somebody else’s turn and let’s hope for the best that next year Italy will be with a World Champion. 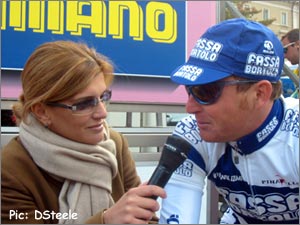 Di Luca arrives, very polite with everybody but doesn’t say much except “I feel tired, not from racing but from jet-lag” at that point Alessandra De Stefano the nice looking blond Rai Tv Reporter ( who has a weakness for our Andrea Peron) hugs him, and I think that he and she feel a lot better !!! 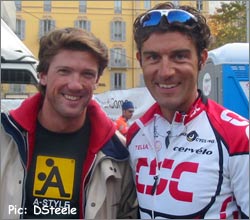 This is Andrea with A-Style owner and my “driver” Marco Brun.

Talking about Andrea Peron… where is he… I see Carlos Sastre and ask how he is, to which he answered
“Cold but fine” (it was chilly) and behind him is our Andrea Peron.

Pez: How’s it going Andrea?
AP: Great, for me this is nearly the last race of the year, I race again next week in a TT and then a little race for charity then we are out for some beers Dunc… No you’ve brought Marco with you… look Marco I’ve put a sticker of your logo on my Helmet!!!!.

Pez: What the Team’s plans of attack for today?
AP: We are a team that likes long breakaways, as we don’t have anybody that can compete in the last 5/6 km with the likes of Bettini and Bartoli (who has signed for CSC for next year) so something will happen!

In fact Andrea was in an important breakaway group of 3, 40 km from the finish that split the group, he was caught by Bartoli entering into Bergamo.

Pez: See you at the finish Andrea:
AP: Ok Dunc, 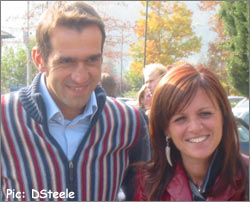 Then I hooked up with Mr & Mrs Ballerini. Franco was all smiles and I always enjoy seeing him, except that after the Ghisallo we followed him in the car as did 20 other journalist cars and we found ourselves in a traffic jam!!!. Now as you probably know, the press cars lead or follow the race, if you stop to let the race pass you then have to follow, which is MAYHEM! Cars left and right going at 7 different speeds in 1km… break… gas… overtake… gas… more gas… SHIT BREAK! We see Franco head off in one direction… we think he knows the way to get ahead of the race… follow Franco, as did 20 others. mmmmmmmm Franco didn’t really know where he was going!!! I pull the car up to the side of Franco’s and ask “Franco, where ARE you going!!!?” He pulls out the map and looks and says he was heading towards the Selvino (a nice tough climb) to watch the race and wasn’t following all the race! “But Franco we followed you as we thought you knew the way to the front of the race ”

“Look behind you Franco, everybody is following you!!!”
He looks and bursts out laughing.

I asked Franco if the Worlds were lost by Italy or won by Astarloa?

FB: Won by Astarloa, Bettini was in a position that we and he asked for and that the team worked towards. Astaloa was smart and to went at the correct time as everybody was waiting for Bettini. Astarloa won the World Championships.

At the Finish, it was packed with people. Bergamo is a beautiful city that has a real passion for cycling. I get myself near our Photographer, Roberto Bettini, but without having to square up to somebody who wanted to be big and important and asked why I had a pass for both press and photographer. Anyway he didn’t bother me again! So … Bartoli wins… he’s happy… Bettini collects his World Cup trophy with his 2 week old Daughter in his arms… and everybody is happy… Andrea Peron is being interviewed by a nice looking tv reporter and he is happy … I get my photo’s and a few invites to end of year party’s plus some interviews and I’m happy… and these I want to share with you to make all you readers happy… and I do make you happy… DON’T I????!

BMC Bikes: The Swiss Are Attacking!

The Latest World Rankings Are Here!