It’s turned into women’s cycling week here at PEZ, and today’s 3rd jewel in the crown is from the lovely ladies at Team Velo Bella. Based in Monterey, but with 150 members around the world, their mandate is to have fun: pre-, during, and post-race. Christine Vardaros takes us along for their weekend in Philly… 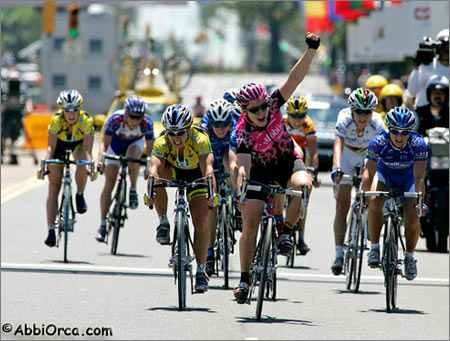 T-Mobiles Ina Teutenburg bags the win, but as Team Velo Bella knows, there’s so much more to the full “experience”.

Our team just competed at the Liberty Classic and had a fabulous time – and the race was a blast too! Even though we were there to perform our best like all the other teams, we also made sure to enjoy the process with panache and flair – the Velo Bella way. We pride ourselves on being very approachable and social everywhere we go. And with all those hot male cyclists surrounding us, you’d think we’d be the envy of all women. Unfortunately the men and women racers don’t really have the opportunity to mingle much, forcing us to resort to alternative measures to find dates. 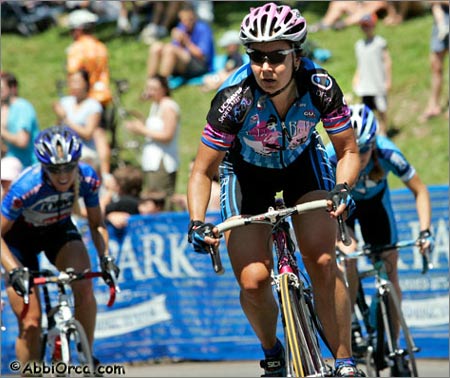 When I showed up at the host hotel at noon the day before the race, the lobby was like a Who’s Who of bike racing – superstars everywhere and I was immediately reminded of just what an honor it was to be there. Pockets of color were scattered about as the teams were gathering for their prep rides. I think this was the first time I saw the front side of Nurnberger’s Petra Rossner. I’ve heard her referred to as “Mother Liberty” after winning this race seven times. Since she traded her spot on the start line this year for that of director sportif, we all got to move up one place on the results board!

Saturday’s Prep Ride
After kitting up, I was ready for a prep ride. I met up with three other Bellas and three Velo Bella Fellas at the infamous steps of the Art Museum made famous by that movie, “Rocky.” It was a fitting way to start the day, although I did find myself humming that tired tune for the rest of the day. Caroline Hacker (married) led the ride. While heading down the one main road of the race course, we spotted team after team whizzing by in the opposite direction. It was reminiscent of downtown Leuven (Belgium) during rush hour, but in fast forward motion. In the time span of five minutes, I saw CSC, Navigators, Ford Basis, TravelGirl, Webcor, Colavita, Nurnberger, Suanier Duval-Prodir, Snow Valley, Liquigas-Bianchi – to name a few!

Since we needed to get back to the Rocky Museum rather quickly for an Orbea photo shoot, we decided to tag onto the back of the Jittery Joe train up the road, presumably bound for Manayunk. Tom (VB Fella) took up the chase with the rest of us in tow. As soon as Velo Bella Diane Castor (enjoys long walks on beaches, cross country skiing, 4-wheeling. she can be won over by a good glass of pinot grigio, and prefers her meat raw. Oh, and although she sports no visible tan lines, she is accepting of them on others) spotted the flick of his elbow, she took over and bridged the gap to the train.

Just after we caught them, they pulled over. While stopped at a light, we heard the sound of a tire skidding. I looked back and saw the Jittery Joe’s guys. Was one of them showing off for the Bellas? Shortly after the light changed, they came around us, no words spoken. I guess the skid mark wasn’t for us. By the end of our ride, the weather had turned from dark and dreary to bright and brownie-baking hot.

The Velo Bella gals crash a wedding and trade bikes for bouquets.

Next, the Photo Shoot
We met up with Justin Slarks of Orbea at Azalea Gardens across from the Museum. After riding in 27 mini bike path loops while watching Justin risk life and limb performing acrobatic acts involving tree limbs, garbage cans and bike path sprawling to get the perfect camera angle, we crashed a nearby bridal party photo shoot. We ran over to them, exchanged our pink bikes covered in a day’s worth of grit for white floral bouquets and baskets, then all posed for shots. As the photographer snapped away, the parents bitched about this “waste of time” while the gals thanked us for injecting some comic relief into their otherwise tedious event.

Two Kinds Of Riders
At the team dinner, a guy seated next to me said, “There are two groups of racers: those who have crashed and those who are going to crash.” I vehemently denied its validity since I never crashed in a road race nor did I plan on it. Later, I learned that this guy’s middle name was “Crash.”

Putting in on the line at the Liberty Classic start.

After filling our tummies, we had a quick meeting led by our team leader, Liz Begosh (enjoys sunsets and champagne by a blazing fireplace, is easily won over by a great sense of humor attached to a genuine smile. And if that doesn’t do it, try strawberry margaritas and chocolate torte.) The one point she drove home was, “Just make it through the first lap and you’ll be fine.” I thought – piece of cake. I’ve done this race last year with no sweat. And the rest of the meeting was focused on team flair and post-race celebrations.

Race Day
By coincidence, I rode over to the course with the CSC team. And what a very fine coincidence he was….their mechanic, Magnus, that is! By the way, I am putting in my vote for Magnus to be the first all-male “daily distractions.” And from what I hear, I am not alone in my sentiment.

The race started off well as I won the mad dash from pre-start line to start line, earning a coveted front row position between Kristin Armstrong (T-Mobile) and my teammate Jill McLaughlin (Likes cats, rabbits, rhythm, people with accents, and laughing. If you can make her laugh, you’re in!)

To calm the nerves, I conducted a last minute preparedness check: Health….check. Fitness….check. Helmet/shoes….check. Flair (funky blue ponytail/mauve shag carpet headset cover/pink body glitter/purple martian head hanging from seatpost….check. Resolve….check. Just as I’m finishing, a Fuji gal turned to me and said, “Hey Blue, our team’s been taking bets on who’ll be the first to rip your blue ponytail off. It’s really distracting.” Just as I started to apologize, she added, “Well, I’ve ridden behind you a lot in last week’s crits because you’re a safe rider to follow.” Gee, sounds like a catch-22, sort of like drafting behind a garbage truck when you’re tired (so I’ve heard.) I really appreciated the compliment, and needless to say, the hair remained intact.

Not her real hair.

The gun finally went off and so did the race….off to its first crash! Within two minutes, a gal clipped out of her pedal, and beelined across the peloton sideswiping unsuspecting cyclists. About 15 minutes later, the nervousness of the race claimed its next victims to include four Bellas. Caroline was the worst off, flying mid-air followed by a couple of somersaults. She found her bike in a completely upright position, propped up by a mass of bodies and bikes. Diane, Sami Fournier (married), and Kristy Scheffenacker (has a boyfriend) were all forced to chase in hopes of catching the peloton. Sami caught back on but her heroic effort left her exhausted and she became unglued a lap later.

Onto The WALL
The pace was intense leading up to the Manayunk Wall. Liz, Jill, and I stayed close together for this stretch. Once on the wall, everything around me seemed to slow down. The crowds were deafening. It was all surreal. I slowly passed gals as others passed me. I did make out quite a few, “Velo Bella,” “Go Blue,” “Yeay Blue Hair” and even a sole “Mi amore Velo Bella” (I was afraid to look over at its origin for fear that I may tip over.)

It surely didn’t feel like the same climb I had pre-ridden yesterday. Maybe the Fuji girl was holding onto my hair.…nope, she’s not there. 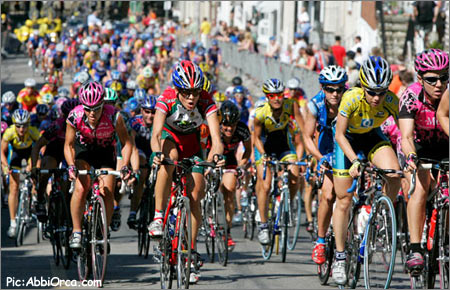 The women tackle the Manayunk Wall on lap one.

Well, made it up the climb and just when I thought I’d almost made it through the first lap, CRASH – right into the gal in front of me who was on the ground. Well, it was more like a love tap until she stood her bike up, her rear wheel hooking onto my handlebars catapulting me onto the ground. As I am on the ground still clipped into to one pedal, she attempted to free her wheel, spinning me like a top with my knee as the pivot. Although it probably only took about 20 seconds to get back on my bike, it felt like a minute. But it was nothing compared to the perceived time I spent chasing the peloton. Of course Liz’s “make it through the first lap” advice and Crash’s “two groups of riders” theory ran through my head – shoot, had I jinxed myself?

After I realized that I was not going to catch the pack, I removed myself from the course and headed over to the medics for bandages, ice pack and pity party.

Once recovered, I returned to the course to cheer on the remnants of the field. When it was obvious that the break was going to stick, we all knew it was over since Ina Teutenberg was in that group. Only three of the Bellas finished the race. Hiroko Shimada (likes to dance, read, and eat Thai food. Plays with big magnets and grows e-coli at work. Her ideal guy is bilingual and can keep up with her appetite at the dinner table. And she’s a cheap date – one beer is all it takes!) was our highest place gal in 46th, followed by Jill in 75th, and Liz in 88th.

Never Let A Bike Race Spoil The Fun
After the race, a bunch of us got together for dinner, that led to drinks, that led to dancing well into the wee morning hours! With the race behind us and future races momentarily out of mind, we finally had our opportunity to meet new people, although we never knew who we met since they all had their helmets off.

https://pezcyclingnews.com/photos/races05/wachoviaweek/vb-christinehead1.jpg align=left> About Christine: “Peanut” enjoys baking, eating, rooftop hopping, ledge running, and fixed gear riding. Her ideal guy is muscular yet thin and trim and has eyes that sparkle. She is a sucker for vegan chocolate chip cookies, dark chocolate, Kasteelbier, and good port. She is a professional cyclist for Velo Bella and has a cycling column, “Training Wheels” in the Sunday edition of the Marin Independent Journal. Visit her website ChristineVardaros.com.

And for a refreshing dose of something cool in pro cycling, check out all the VB babes at the Velo Bellas website .

MailBag: An Excellent Waste Of Time