Inside The US Postal Training Ride

Last Friday the PEZ-Crew was in full force at the US Postal Service/Berry Floor’s 2004 team presentation. The day started with the team’s training ride in the California hills, followed by the presentation & press conference, and then some time alone with Lance. Here’s how the day got started…

It was 8:30 am and the bad coffee from the hotel was not doing the trick. I was having trouble seeing through my windshield because the heavy frost from the night before had not quite melted yet. But with the help of Mapquest and a few right turns, I was able to find the USPS training camp in Solvang California. 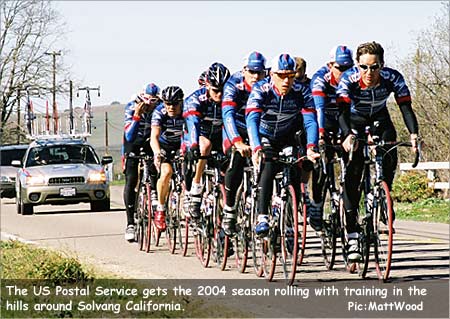 I was here for the presentation of the 2004 Us Postal Service presented by Berry Floor team.

In the back parking lot USPS had set up their tents, and further back there were two team trucks full of bikes and spare parts. While the team was probably asleep, a group of about fifteen Postal mechanics and support personnel had been preparing the bikes, setting out food for the riders and filling water bottles for the morning training ride. 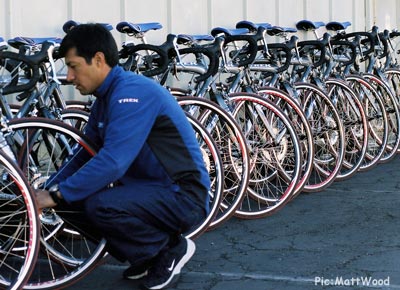 All of the team bikes were neatly lined up against one of the team trucks like cards spread out on a black jack table. Names of the team members were printed on the top tubes of the bikes – Beltran, Hincapie, Landis, Pena and Armstrong. I had to pinch myself. I felt like I was on a movie set and here were all the props. But this was the real deal. All of the riders that I had seen for years on OLN and ESPN were here to start the 2004 campaign.

For the support personnel, this was just another day. They all had jobs to do preparing for the riders. Everyone was busy, filling water bottles, adjusting deraileures, cleaning drive trains, checking brakes. 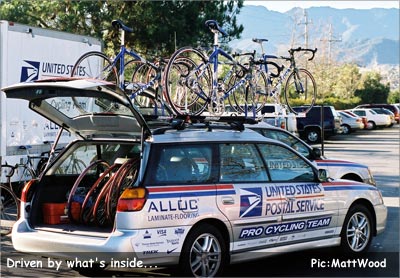 At about 9:30, the team members came trickling out of the hotel, dressed in the USPS team uniforms. They were very approachable and many stopped to sign autographs and have their pictures taken with fans and babies of fans. It was like a scene out of baseball spring training. All of these great athletes were available to say hello, chat with and shake hands. 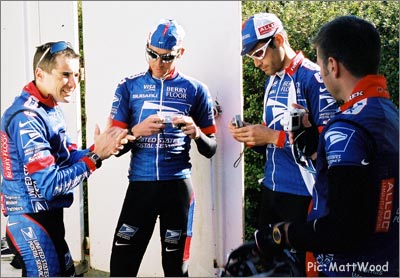 Close to 10:00, with the riders happy with the sizing of their bikes and tired of doing figure eights in the parking lots rode out onto the main street of Solvang as a group. They looked relaxed, talking with each other, telling jokes and getting prepared for two to three hours in the saddle.

This was the official media day for the USPS team, so there were about 20 journalists who were following the team in an assortment of rental cars and trucks. Imagine a main street in any small town USA, with a caravan of 25 riders and a group of about ten support and media vehicles. All of the media vehicles took liberties at some stoplights and sometimes passed on the right to stay up with the team. 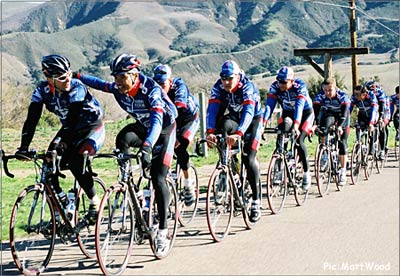 Solvang is in the middle of California about 15 miles from the coast. It is like being in the middle of a Steinbeck novel. Huge valleys with lush pastures and private vineyards. Rolling hills with long narrow two lanes roads. There is very little traffic and the people are generally friendly and accommodating. The best part is that during the day the temperatures reach the low to mid 70’s. In other words perfect riding conditions.

We were all chomping at the bit to get our turn to take pictures of the team. After about 30 minutes our car was waved up to have our first shot at the team. I wedged my body half way out of the front window hoping that the door lock was on! We drove slowing past the team, and got smiles, and waves. We were clearly entertaining them with our contortions out of the car.

The team looked relaxed and confident. They were not pressing although they were averaging about 25 miles an hour on the flats. Up through the windy hills they stayed together as a group with a few riders out of the saddle, but none of them looked like they were struggling to keep up. 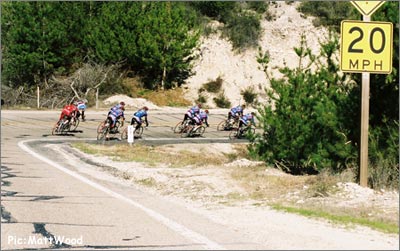 On the descents our little compact had to struggle to keep up with the team. On some of the narrow descents we lost sight of the team completely.

The ride had taken about three hours, and covered about 1500 feet of climbing. There were no breakaways, no chasing or sprinting. Just time in the saddle. Time to get to know some of the new team members, tweak the saddle height, tell some jokes and get refocused for the coming year.

It is obvious that this team and its support personnel at USPS are prepared and ready to improve upon the domestic and international results from last year. They all know their jobs and do them with perfection.

This training camp is the first step in a long journey through the Classics, the Tour, the Vuelta, and the Worlds. Postal looks ready.

I would like to thank Dan Osipow and the entire USPS organization for the opportunity to be a part of their family for the day. The access to the team and the friendly support of the organization made the day one that I will never forget.

Stay tuned for more coverage from the US Postal Team presentation, including the first-ever PEZ-Clusive interview with Lance.