Two days in Stuttgart – and it’s not all leiderhosen, pilsner & sausage! PCN went under the dome to see the World’s Best going around in circles very fast. Here’s our exclsuive Pez-Report on the Gold medal rounds…

Saturday started with the men’s sprint competitions, where the favourites met each other in the heats. In this high-speed tactical showdown over 1000 m Germans were not too happy as Jan van Eijden and Jens Fiedler did not reach the finals. Laurent Ganй (FRA) was “superieur”, strong Aussie Jobie Daika got silver and young German sprinter Renй Wolff reached the bronze medal. Today, the hall was nearly completely covered with spectators, giving the whole event the right athmosphere – simply great! 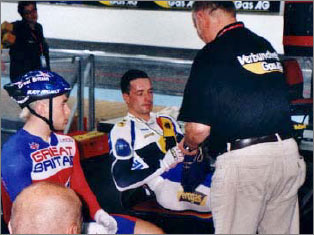 The draw of the start positions:
Jens Fiedler (GER) vs. Ross Edgar

Maybe the king’s event took place in the late Saturday afternoon: Finals in the 4000 m team pursuit. Unfortunately, no German team was at the start as some of the riders wanted to show their protest that way to some trouble in the nomination of riders – they would have been hot candidates for a medal at these championships as most of the years ago… 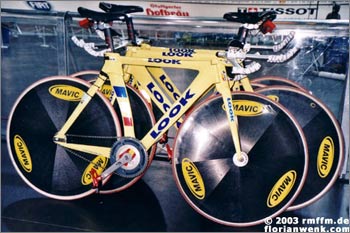 In this event, the teams’ sponsors and sports institutes can show what they are able to build: the team pursuit bikes. The more futuristic the better – no, to be honest, there was no emphasis on futuristic but on puristic equipment. Everything you need was there, but not a single screw too much. 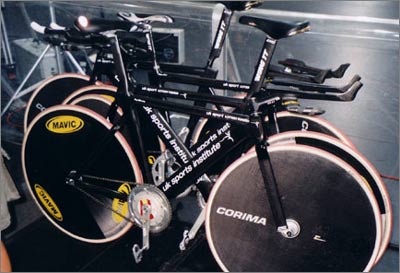 For example, the British team’s full-carbon bikes (from the frame to disc-wheels and handle-bars) – made by the UK Sports Institute, as the logo said – had not even a cork ribbon around the bars. We were surprised to find systematically positioned strips of emery paper there… 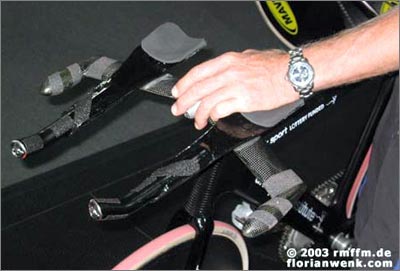 The French equipe trusts on Look bikes even in the pursuit events. To monitor the power a rider brings to the pedals, the famous SRM system was used – surpgrisingly mounted behind the saddle. Modified Look-Pedals did not give the riders a chance to pull their feet out of them during a powerful start, as their shoes were fixed in those clipless pedals using normal screws everyone can find in his tool-box. 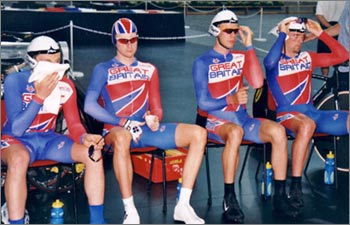 In this event, France got the Bronze medal winning over Russia. After this, several thousands of spectators were waiting for the heat of the day: The finals between Australia, which was told to be the favourite, and Great Britain, with the new World Champion in the individual pursuit, Bradley Wiggins.
After the start, we heared two big bangs: one from the Australian side of the track, and one from the guy with the pistol. –

One of the Australian riders had not left the starting machine properly and fell down the track! Due to this, the race was neutralized and re-started a few minutes later. 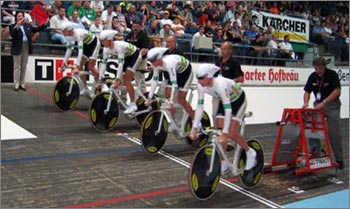 In the following 4 minutes, we could feel our hearts beating faster and faster – Australia and Great Britain layed close to each other, just with a few hundreds of a second difference. After about 2000 meters, you could see that the Australian team could hold its nose ahead constantly. On the very last kilometer, both teams were riding with 3 riders only – and the schedule says that the time of a team’s 3rd rider crossing the line counts for the rank… 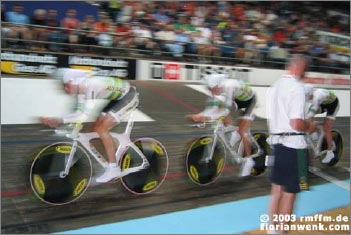 Great Britain was fighting strong with Brad Wiggins and his teammates, but in the end, Australia finished first with 3:57.185 minutes – A NEW WORLD RECORD!
“Stand up, stand up, for the champions…” – The crowd in Stuttgart and especially the Australian team members celebrated their mates with standing ovations – never before a team had covered this hard 4k event faster than those four young guys… Excellent – fantastic – the Cyclones!

How better could two days at the Track Worlds come to an end than this… Fair competitions facing fair and enthusiastic spectators, strong athletes facing a perfectly organized event. The world has been a guest in Stuttgart, Germany – and the games will go on: in 4 years, the World Road Championships will be held here as well. And we’ll be there again!

You can find Florian and Rene online at:
Florian Wenk www.florianwenk.com
and Renй Mueller www.rmffm.de