PEZ Fans! I’m just back at Pez Worldwide hq, after 3 days of action, and almost as many hours of sleep – at Interbike 2004 in Las Vegas. It was a great show – we saw the bikes, talked to the pros, met up with friends, had no time for lunch and too many tequila’s for dinner – here’s our first look at the evidence… 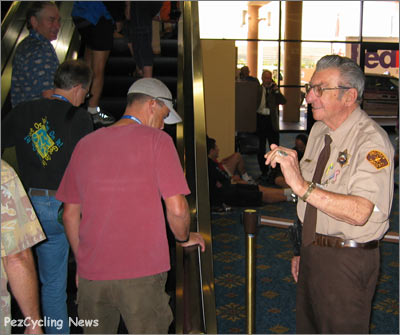 This gent was there from start to finish, always with a smile – wishing everyone a great day and reminding them (in a Brooklyn accent) that smiling “makes everyday brighter”.

Interbike is always fun – everyone who is anyone in the bike biz together under one roof for 3 days of showing up, showing off, one ups, and one offs, plus the unmistakeable smell of business – plugged in and turned on as only Las Vegas can… I personally love that town, it’s just so damn much fun, the adrenaline started to flow as soon as I stepped off the plane, and literally did not stop till I was flying back home 3 days later.

And for everyone I met at the show who wished Interbike was held somewhere else, I saw 10… no make that 50 – people who were (barely) living proof of their Vegas-love by their bloodshot and exhaust-pipe ringed eyes, graveled voices, and Tylenol breakfasts. By day 3, the tales of rabble-rousing could be overheard in every booth. Yup, that’s my kinda town. 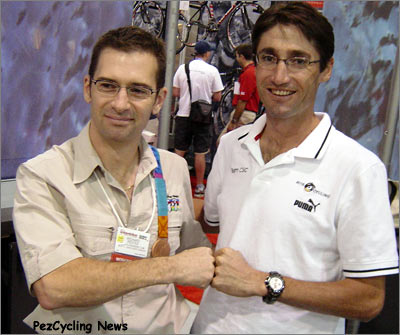 We scored 15 minutes with Bobby J., and had a funny chat about things like the time he roomed with Sean Yates – more on that later. Here he gives me a solid and let’s me wear his Olympic medal – sort of – his right hand was firmly holding it in place…

ONE HUGE STEP FOR PEZ-KIND
Of course it never hurts when there’s a little of that love directed your way, and Charles, Josh and I were feeling it throughout the huge expo pavilion at the Sands convention center. Two years ago, when PezCycling was just a pup, I had no budget and no one to cover Interbike. Then I received an email from a reader and self-proclaimed tech-weenie named Charles Manantan, offering to cover the show for us if I could arrange credentials, and PEZ took a big step forward.

Of course in that first year, no one at the show had heard of us, and even fewer wanted to make time for us, but it was the start of something good. Last year, I had budget to cover a crappy motel off the strip (the kind with an a/c that sounds like an old Husqvarna), and Charles and I managed to get a few appointments, and even met a couple of folks who’d actually heard of us.

This year – well, by comparison I can hardly remember last year as it was so different – this year people were actually calling us to set meetings, and instead of explaining to folks who we are, I was thanking folks for the kind words and compliments about our “fresh” perspective of reporting pro racing news. We even upgraded to a crappy hotel ON the strip – but with no improvement in the a/c situation. 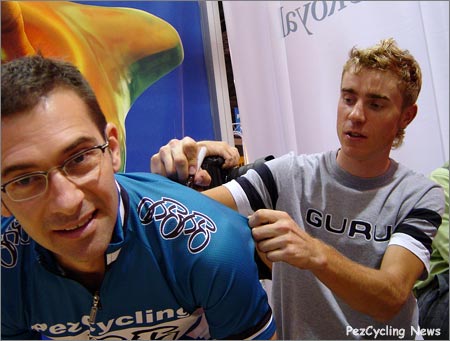 Check it out – Damiano Cunego signs the first ever PEZ jersey. I scored him some Pez socks in return.

At one point during our meeting with the guys from Giant, two lovely blonde ladies (Julie & Bo) were introduced. The first thing they said upon meeting us was – “we love the Daily Distractions!” Julie even called her husband (a regular PEZ-Reader) on her mobile right then so he could say hello in person. That was pretty cool.

DOING BUSINESS WITH FRIENDS – IT IS POSSIBLE!
Of course in the coming days, we’ll be showing you lots of what’s cool from the tech side if Interbike – neat new rigs, cool carbon components and the rest, but I admit it’s possible to lose sight of all that amidst the giddiness of seeing old friends and finally meeting many of our clients for the first time. The best part was that after a couple of nights of post-show “meetings”, the “clients” quickly turned into friends. 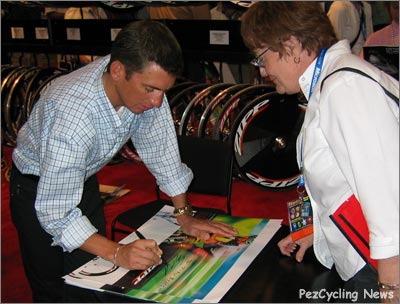 It was good to see Tyler out at the Zipp booth– he signed literally hundreds of posters for fans.

For you naysayers out there wondering if we’ll be giving our “friends” special treatment in tech reviews etc – rest assured they’ll get no more special treatment than any other professional organization would give– and no less than we feel is right. 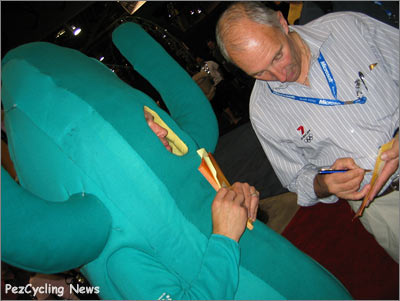 Thanks again to everyone we had the chance to meet, or meet again. Interbike is a great opportunity to check out all that is awesome in gear and some of what’s awesome in riders, but for the crew at Pez, it’s more a chance to get to know the folks we work with and promote the sport with day to day. There’s plenty of chance for competitive spirit both commercially and in sport. More than anything, Interbike is a chance to let all the daily grind get by and just enjoy being around so many that call Cycling home. 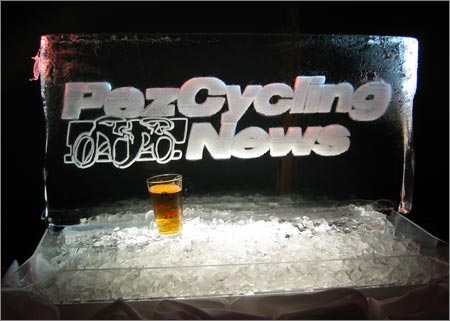 Yes Baby! You know you’ve arrived when you finally see your name in a block of ice at the Sinclair Imports party!

See something you like? Or maybe don’t like? We’re always open to reader opinions and views, so drop us a line if you’re so inclined to [email protected]
Like PEZ? Why not subscribe to our weekly newsletter to receive updates and reminders on what's cool in road cycling?