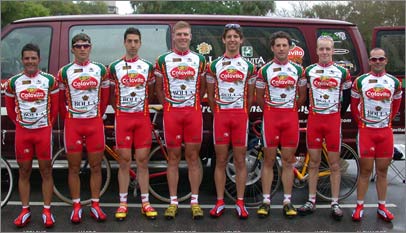 The Importance of Passion
For those of us growing up in the 80s, it is probably impossible to overestimate the influence that the movie “Breaking Away” had on nurturing our passion for cycling. Personally, I feel that a copy of the movie should be taped to the handlebar of every road bike sold. One other person who obviously feels the same way is John Profaci. Not only did it inspire him to take up cycling via triathlons, he joined the family business of Colavita USA, an Italian specialty foods company started by his father. In the spring of 2000, John decided to scale back his competitive triathlon career and to take up cycling seriously, only to find that the local shop team had lost its sponsorship and was on its last legs.

Rather than be discouraged, he woke up the next day with the inspiration of cycling in Italy with a Colavita uniform! With typical American hustle, he quickly convinced his Colavita partners in Italy and an amateur team took shape. The team attracted some of the strongest elite cyclists in the New Jersey area, and Colavita sponsored a race in the Colavita family’s region of Molise, Italy in July 2001. What could go better with fine Italian food? Wine of course. So it was only natural that Bolla wines became a co-sponsor of the team, along with a host of Italian brand companies. The buzz about the team continued to the point where the decision was made in late 2002 to make the men’s team into a UCI Div III team for 2003, coupled with a women’s elite team and future plans for regional amateur teams throughout the USA.

Are You Listening Hein Verbruggen?
Profaci feels that becoming a Pro team, rather than remaining a regional amateur team, was an important step in both credibility and marketing. Maybe Hein Verbruggen should take note, but “A cycling team is in fact a marketing project. This type of brand penetration in households across the country is very much on my mind as I go forward. I’ve discovered it (an amateur team) is not the same in the eyes of the cycling world. Now that we have upgraded to Pro TT3, we receive emails and letters from cycling fans from around the world requesting images, postcards, team clothing and more. This does not happen as an amateur team.”

It’s That Easy to Get a Pro Contract?!
Colavita-Bolla has fielded a multi-national team this year, with riders from the US along with Argentina, Australia, and of course a rider from Italy! How did the mix of cyclists come about? “The actual roster of cyclists from around the world was not planned or intentional. Actually, we ended up signing the first group of cyclists who either wrote to us or were recommended by friends and family (Author’s Note: Emails to John requesting pro contracts can line up behind me)! The mix has been perfect and I’ve been lucky. You can ask any of them and they will tell you that they are enjoying the comradery.” 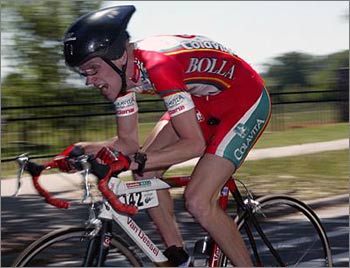 Tyler Wren races against the clock at Tour de Georgia.

Realistic Yet Ambitious Growth
Colavita-Bolla has deliberately avoided the typical route of many new Div III teams of hiring a big “name” rider to maximize results and exposure. “The success of our program in year one is not about big splashes. Gervasio from Bolla and I agreed early on to go slow and build the team infrastructure starting with some good amateurs. We were more concerned with having a unified team of ambitious and experienced amateur cyclists willing to ‘play up’ in the Pro ranks. We’re all learning a lot this year and this will help taking the team forward. I also wanted to watch some qualified amateurs fulfill their dreams as Pro riders and watching them experience the thrill is very satisfying to me personally. The Pro team is focused on eastern races this year for budget and experience reasons. We will plan to compete more nationally in the future, but step by step is the plan.”

Plans for the growth of the team are ambitious yet well-grounded, based around a solid team support infrastructure (not many other teams specifically list their lawyers, creative directors, and communications directors on the main team roster page) and also the marketing of the various sponsors. “It is one of my goals to have 3 –5 regional affiliate amateur teams existing at least 500 miles apart…coast-to-coast communicating with each other, tied into the national website, while the Pro team represents us at the major NRC events. Also, we will select at least one cyclist from the amateur teams for the following year’s Pro team to create some excitement as a true developmental team effort.”

The Importance of Giving Back
In contrast to the often cutthroat “What have you done for me lately world” that cycling can be, it is very refreshing to see an organization with an eye not only on marketing its sponsors but also seriously giving back to the community. Besides sponsoring cycling vacations in Italy each year, Colavita-Bolla also sponsors cycling races such as the “Colavita-Bolla Cup” in Orlando and is collaborating with John Eustice for an exciting new event slated for September 21 called the Newark Grand Prix. Equally important to the race itself, Colavita-Bolla, through the Colavita Foundation for Children, will hope to distribute over one hundred and fifty free bicycles to needy children from Newark on race day. “This will be an ambitious and exciting day in cycling if we are able to accomplish our goals that day,” declares Profaci.

About Stephen:
Stephen Cheung is an Associate Professor of Kinesiology at Dalhousie University in Halifax, Nova Scotia, Canada, with a research specialty in the effects of thermal stress on human physiology and performance. He has been an avid roadie since beginning university in the mid-eighties, and still has non-indexed downtube shifters on his winter bike and wool jerseys hanging in his closet. He can be reached for advice or comments at [email protected]

Racing To Win: Become A Competitor