2017 Giro d’Italia First Days: As the curtains lift on the 100th Giro in the Italian Islands of Sardinia and Sicily, Peter Easton of VeloClassic Tours takes us on a voyage across both islands in the Mediterranean. Rugged and beautiful are words used to describe the Italian islands, but they have their own cultural individuality – Benvenuti a Sardegna e Sicilia! 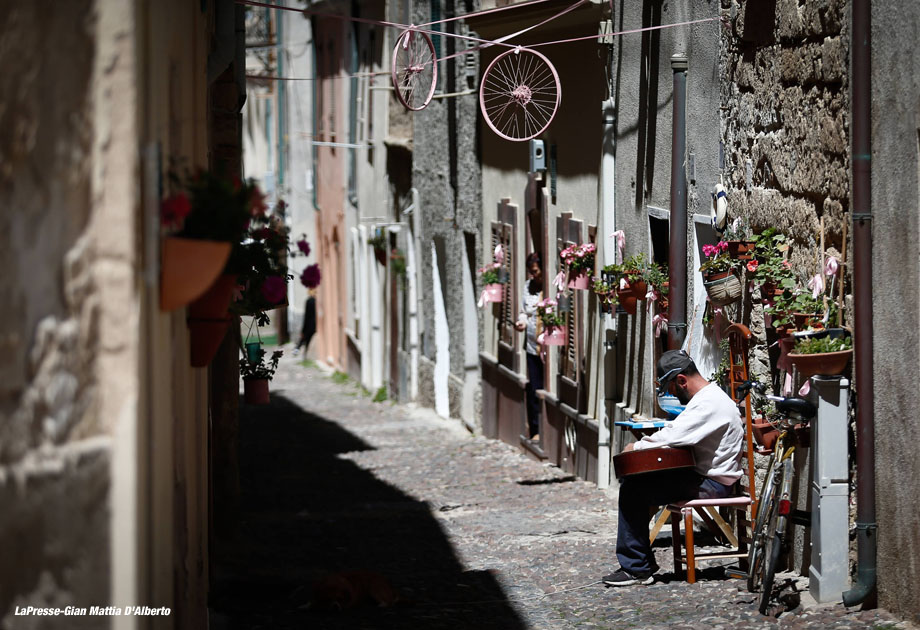 Sardinia waits for the Giro

There is tremendous anticipation that precedes a grand tour, especially one that is built on the celebratory glamour like this year’s 100th Giro d’Italia. It’s as if we are waiting to board a carnival ride for a three week journey through all the absurdities, triumphs, failures and celebration that typically make up the Giro. And this year, that carnival ride requires everyone involved to board ferries or catch a flight to the island of Sardinia for the opening weekend, a theme that the Tour de France has sold us on and one the Giro, mercifully, tends to make a bit more exciting. And there is plenty of pride that comes with hosting the opening of a grand tour, a more international affair of late, and a prime opportunity for a region to showcase its culture, scenery and of course, its mania when it comes to cycling. Of Italy’s 20 provinces, Sardinia and Sicily are the two that are isolated, islands that have more of their own culture than they do Italian, but when it comes to cycling and the Giro, the people, the race, and the country is always Italian first. 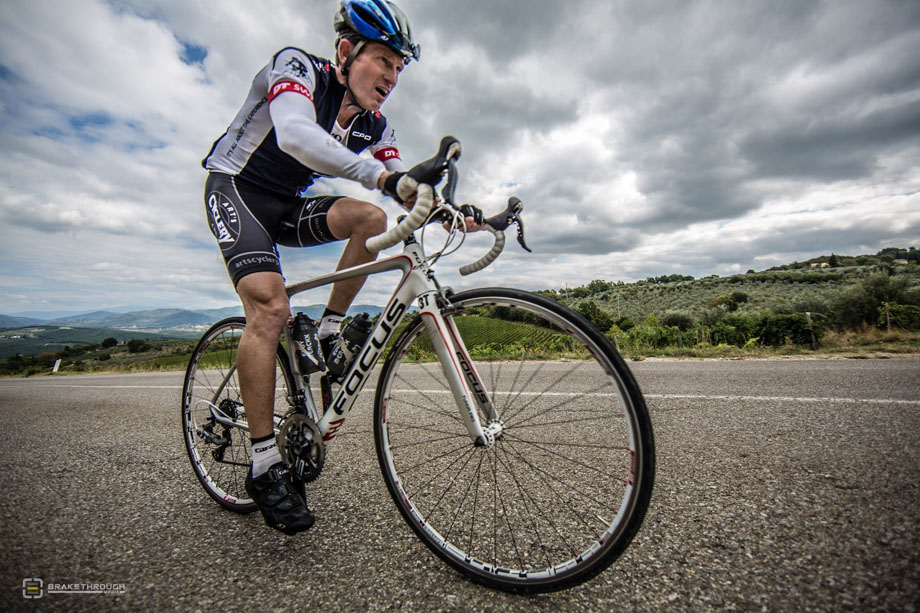 The 2017 edition is the third Giro to begin in Sardinia, the first being in 1991. Tuscan Franco Chioccioli of the Del Tongo squad took the overall that began with four stages on the island, highlighted by victories for Italian legends and former World Champions Mario Cipollini and Gianni Bugno, who was the defending Giro champion. The first visit to Sardinia was in 1961, which marked the 100th anniversary of the birth of the Italian kingdom. The Giro arrived on the island that year for Stage 4, a loop from Cagliari, which was won by Oreste Magni with the overall won by Arnaldo Pambianco, who would go on to win the Giro di Sardinia in 1963. The Giro d’Italia’s 90th edition in 2007 started in Sardinia with the Caprera-Maddalena Team Time Trial and the pageantry of the team presentation on the Italian aircraft carrier Giuseppe Garibaldi. 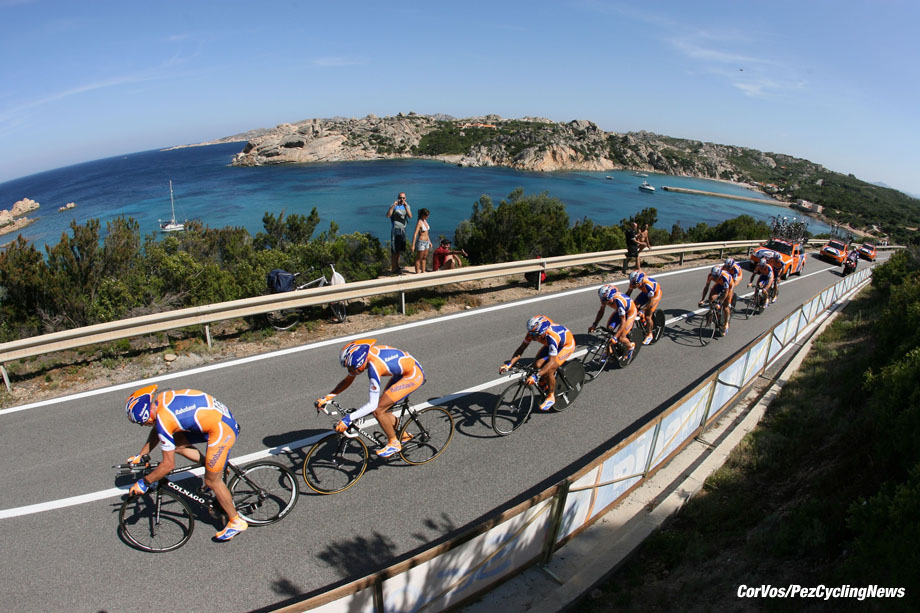 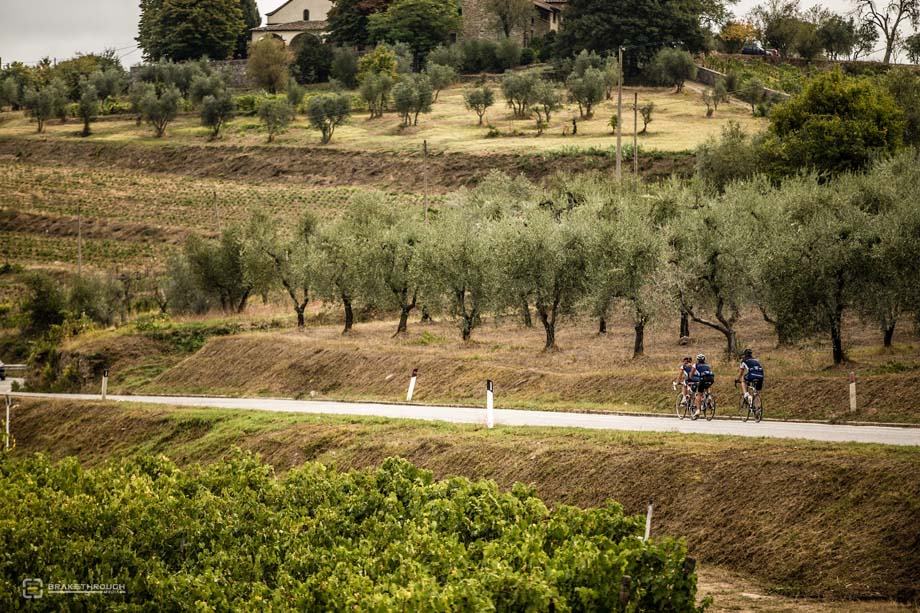 The island itself, rugged and beautiful and a seemingly ideal place for cycling, is extremely challenging to get to, making this Giro start even more significant. The absence of native Fabio Aru may mute the pre-race anticipation slightly, but as the race navigates the perimeter of the island clockwise from Alghero to Cagliari, with a foray inland for some climbing, the focus will be on who will take the first maglia rosa Friday from Alghero-Olbia, a stage not purely for the sprinters. Stage 2 from Olbia-Tortolì (208km) will potentially see a change in the jersey holder, as the hilly profile will neutralize any sprinters. Stage three finishes off the island tour from Tortolì-Cagliari (148km) and is likely a sprint finish before the race heads to the island of Sicily. 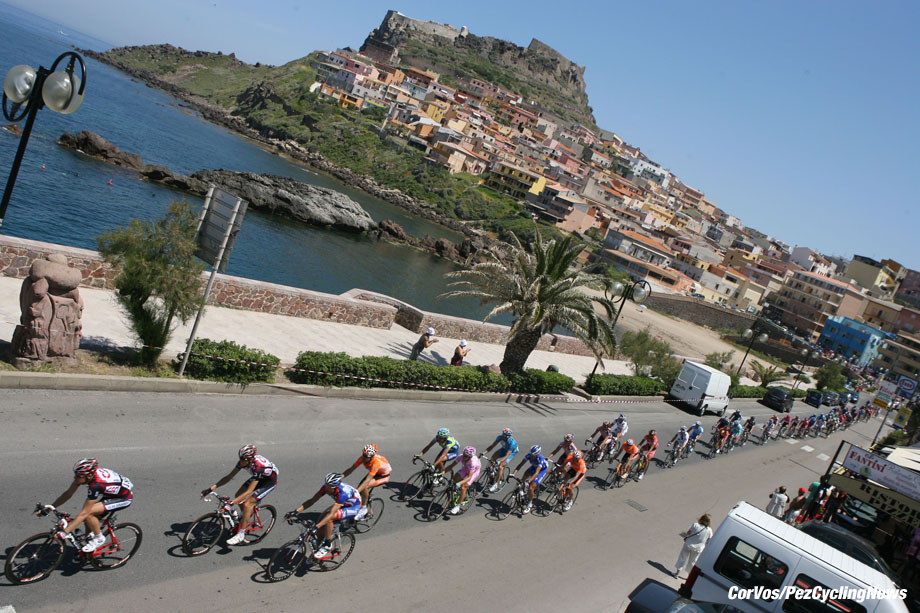 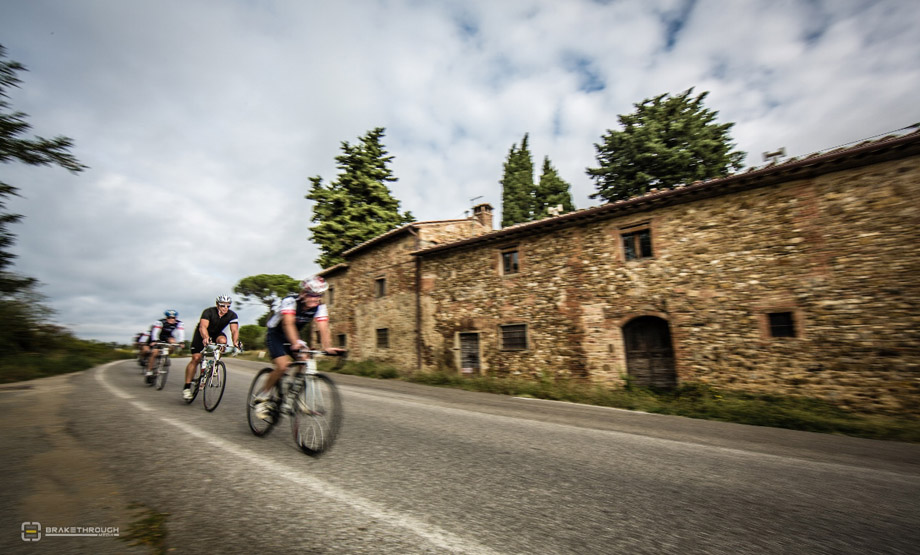 In 2011, the 92nd Giro d’Italia celebrated the 150th anniversary of the unification of Italy. While la corsa rosa did not include all 20 provinces like it does this year, it did return to the southernmost part of the country, the island of Sicily. The island’s iconic Mount Etna was the first mountain stage of the Grand Tour and introduced the peloton to the demands of the three-week race, much like it will this year. As if on cue, the volcano began spewing ash and lava in the days leading up to the stage—a sign that made sure the cycling world knew Etna and Sicily would not be passive hosts during the country’s greatest sporting event. While the Italians were certainly a bit disappointed the winner of Stage 9 was not Italian, the results surely brought the Sicilians great satisfaction when Messina native Vincenzo Nibali finished fourth, 50 seconds behind winner Alberto Contador. Nibali’s finish in his native land reminded the cycling world that this Italian sporting hero was Sicilian by blood, and in Sicily, that is most important. 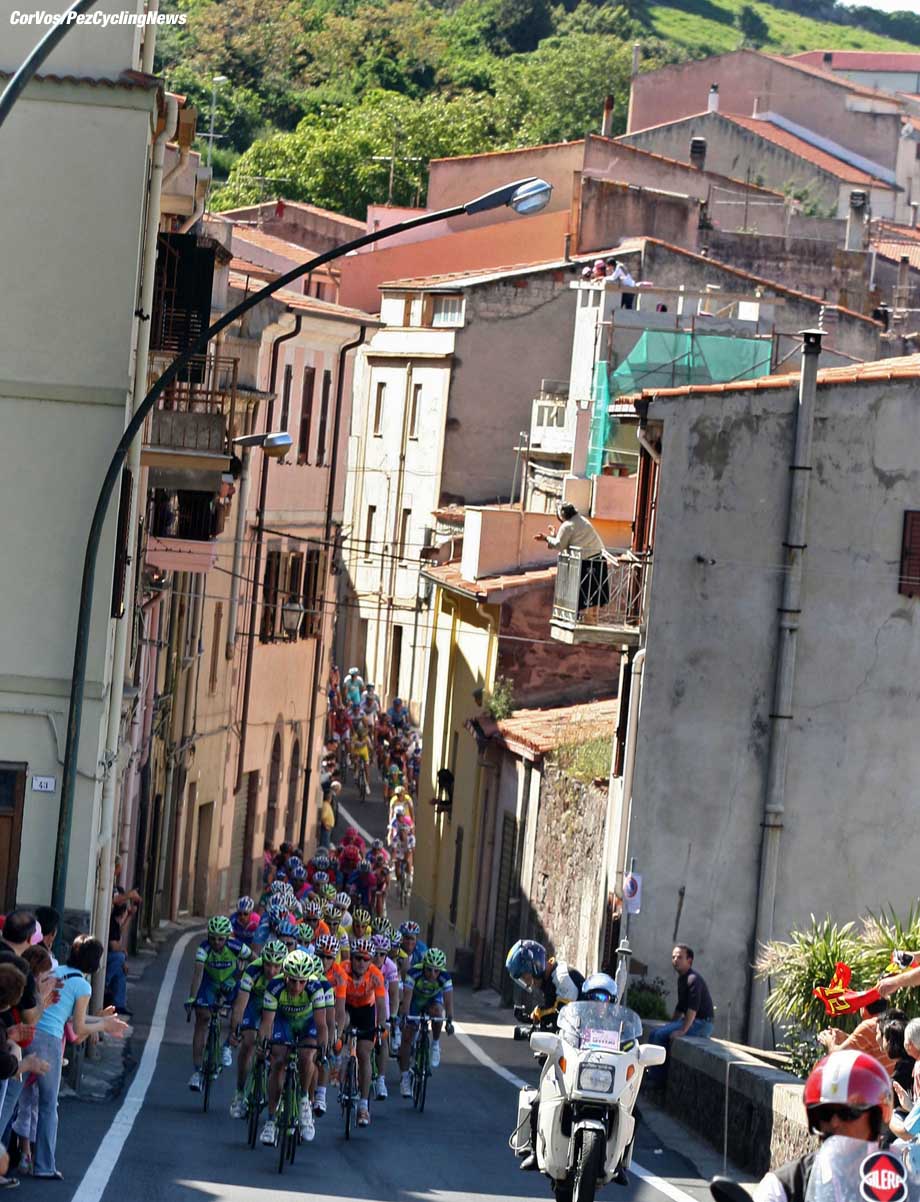 The narrow streets of Sardinia

Sardinia – A great place for training

The island’s population considers themselves Sicilians first and Italians second. The ruling history reaches back 800 BC with Phoenicians, Greeks, Romans, Ostrogoths, Arabs and Normans all ruling the region at some point. Just from this brief list, it is easy to understand the Sicilian’s identity crisis. While Mount Etna is the most prominent feature on the island, the landscape stretching beyond its slopes celebrates an enormous diversity of geography, a wealth of archaeology and history of agricultural bounty that keeps the island more or less self sustained. It is perhaps the very notion that the island—much like all of the provinces of Italy—is so culturally diverse yet distinctively recognizable, that makes it a fascinating, charming and confusing place to visit. Similar to life on the Italian mainland, food, wine and cycling define the people, the land and the history of Sicily. And almost any cycling journey on Sicily is overshadowed by the presence of the island’s most notorious feature, Mount Etna. 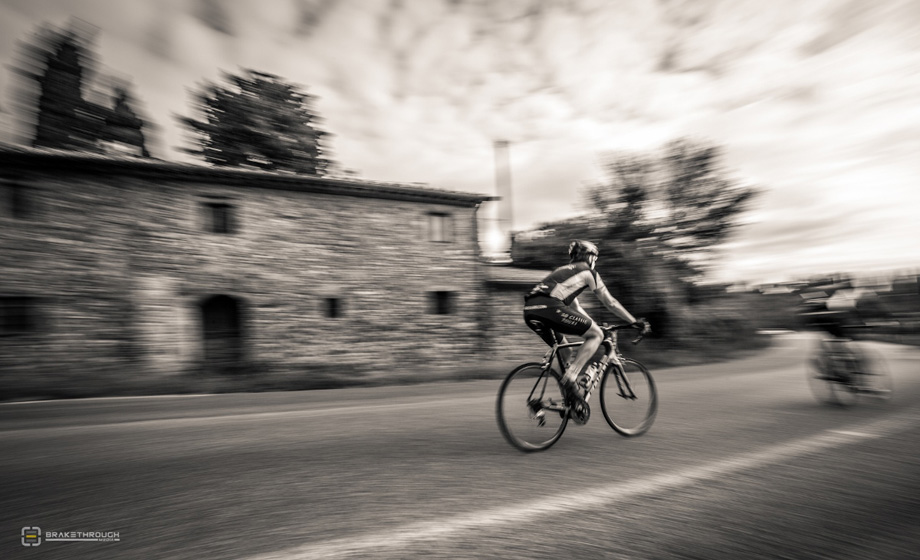 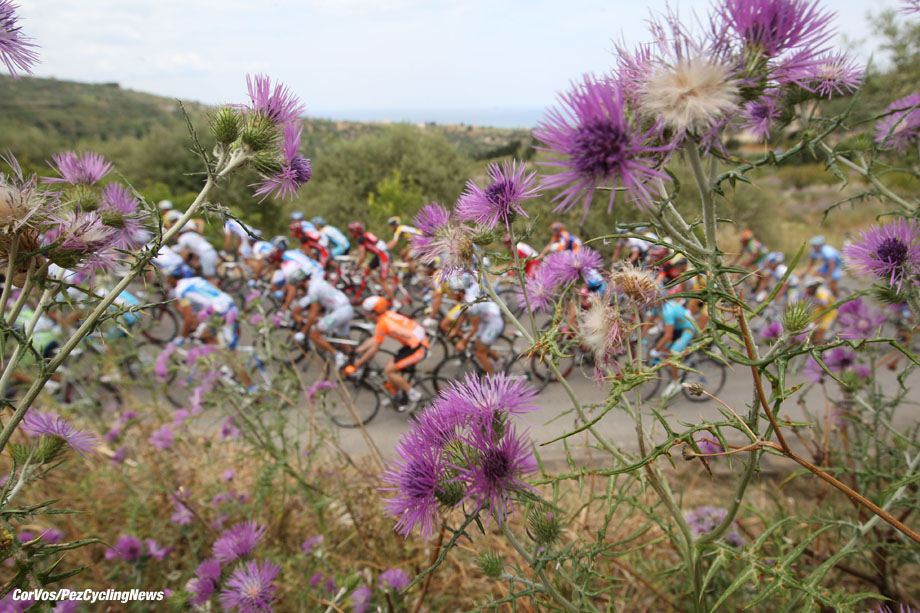 There are two primary routes up Etna – one following roads to the north crater and the other climbing to the southern crater. The northern ascent, from the town of Lingualossa, is 18 kilometers at an average pitch of 6.1 percent. The southern climb, while only 1.4 kilometers longer and only slightly higher in average grade, presents an uneven, cruelly pitched ascent resembling Mont Ventoux in its hellish fluctuations of grade over 19.4 kilometers. The densely populated area squeezed between the eastern slopes of the volcano and the coast is carved into the mountainside, with ashen buildings and stone walls built from lava. Much like staring up the slopes to the naked hump of Ventoux, Etna continually reminds one of its presence. 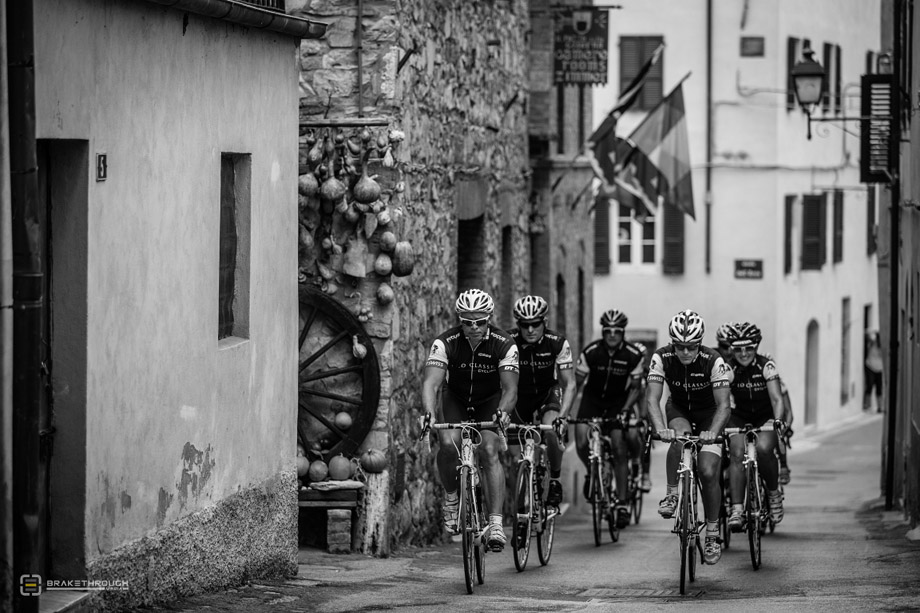 Climbing mountains with a living feel to them—the wind on Ventoux, the perpetual snow banks on the Galibier, the fire breathing underbelly of Etna presents a trait that exceeds the simple notion that one is conquering geography by riding upwards The Giro d’Italia previously climbed the slopes of Mount Etna in 1989 and 1967. In the ’89 Giro, Sicily hosted the start and the first three stages, with Stage 2 finishing atop Etna. Colombian Lucho Herrera led most of the way before ceding to Portuguese climber Acacio da Silva. In 1967, Italian Franco Bitosi beat Spaniard Aurelio Gonzales to win the stage and to celebrate the Giro’s first visit to Mount Etna. “The heat was suffocating. The more you climbed, the less you could breathe,” Bitosi told Italy’s La Gazzetta dello Sport newspaper on the eve of the 2011 stage. “I remember a piazza with hotels. I returned this year for a mountain bike race, the hotels were no longer there, they were buried by lava.” Bitosi’s words are a haunting reminder of nature’s other strength – potential devastation. 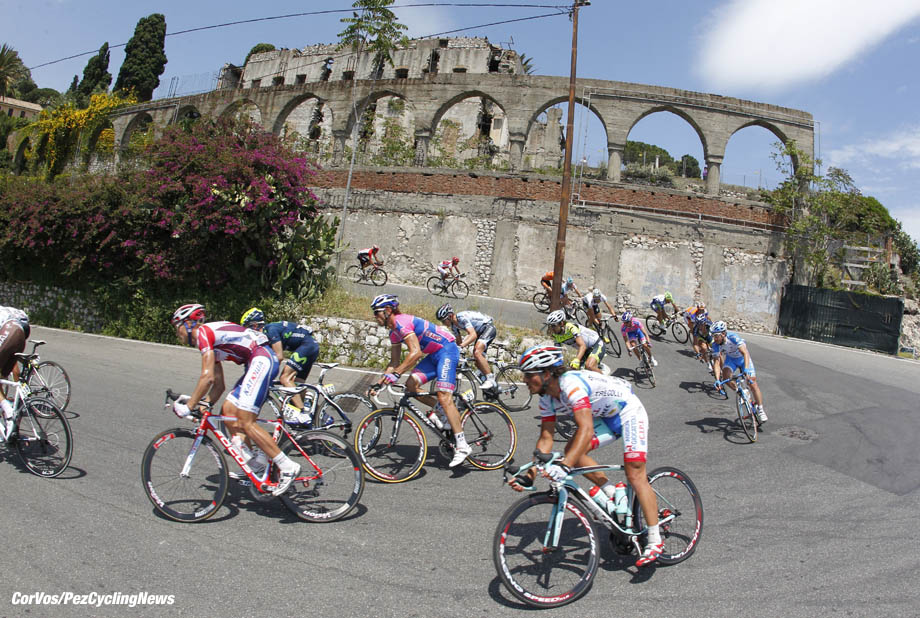 Mount Etna spewed its wrath in six major eruptions during the 20th century alone and most recently in November 2013. The name Etna has its share of legends and theories, but the most compelling is the Phoenician word “attune” which means chimney or furnace. Stage 9 of the 2011 Giro was meant to introduce the riders to the mountainous nature of that year’s race while also honoring the victims of the December 28, 1908 earthquake that destroyed Messina, the hometown Of Vincenzo Nibali and host to the Stage 9 start. The earthquake leveled 91 percent of the city’s buildings, was felt in a 300 kilometer radius and killed 70,000 people. 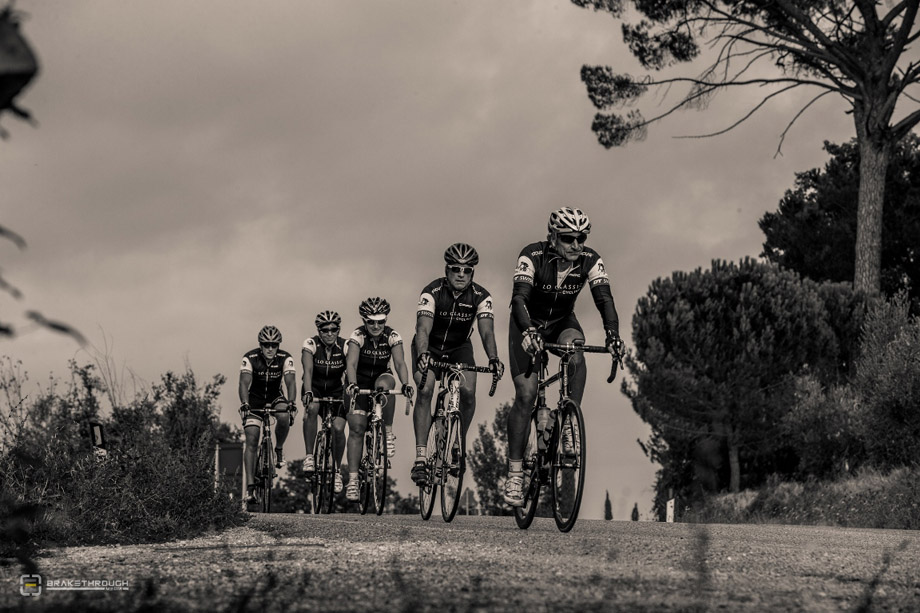 The marriage of art and nature has long been the ingredients for adventure on the island as seen at the ancient Valley of the Temples of the Greeks, the Roman ruins of Taormina and the Baroque architecture of Noto, Ragusa, and Palermo, all come to define the elements of an eclectic island that in some ways continues to labor at its identity. Italians strongly believe that their heritage flows in their veins. Sanguino, as the Italians say, refers to “in our blood.” Cycling for Sicilians has taken on a new meaning since the professional debut of Vincenzo Nibali in 2005. His annual improvements and methodical accumulation of results placed him in an ideal position when the Giro crossed the Strait of Messina to begin Stage 9 in 2011. Hopes were high for a hometown victory, and though he ceded 50-seconds to stage winner Alberto Contador (later rescinded in the wake of the Court of Arbitration of Sport hearing that stripped him of his stage and overall victories) Nibali finished second overall and placed Sicily on the lips of the cycling world. The Sicilians firmly believe it was his return home and his personal conquest of Etna that enabled him to leave his homeland and with the blessing of his fellow Sicilians, power to victory in the 2013 Giro d’Italia. 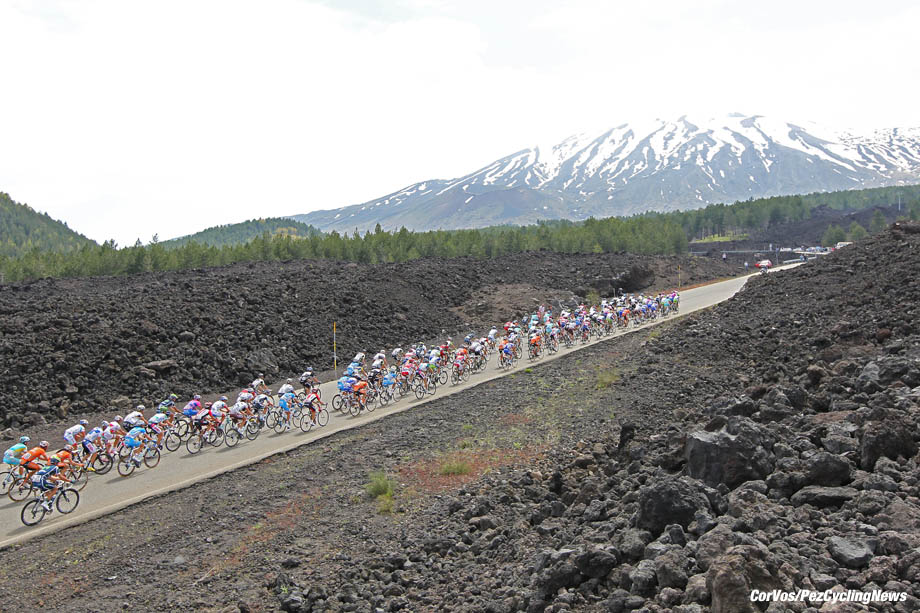 The climb of the volcano

The aura that exists on Etna and the terre nere, or black land that surrounds it, is a continual reminder that the earth is unforgiving in this special location. Like all enormous endeavors on the bike, climbing Mount Etna requires strength and patience, and most of all, it demands humility. While not a trait of the mountain, it is one representative of the Sicilians that cannot be overlooked. As proud as Sicilians are, it is most likely their underlying humility that has sustained them over the centuries of numerous invasions, earthquakes, volcanic eruptions, and in more modern history, dying industries and increased poverty. Legend has it the Sicilians are so passionate you can see the fire of Mount Etna burning in their eyes. The island continues to push forward, with new infrastructure, an impressive list of UNESCO World Heritage Sites documenting the immense history played out across its landscape, and a food and wine culture rivals the Italian regions of Lombardy and Tuscany. Perhaps the hope for Sicilians is to be seen in the same light as other provinces in Italy when it comes to cycling, and perhaps not. Regardless, the land that invented the cannoli really doesn’t need to prove itself to anyone. 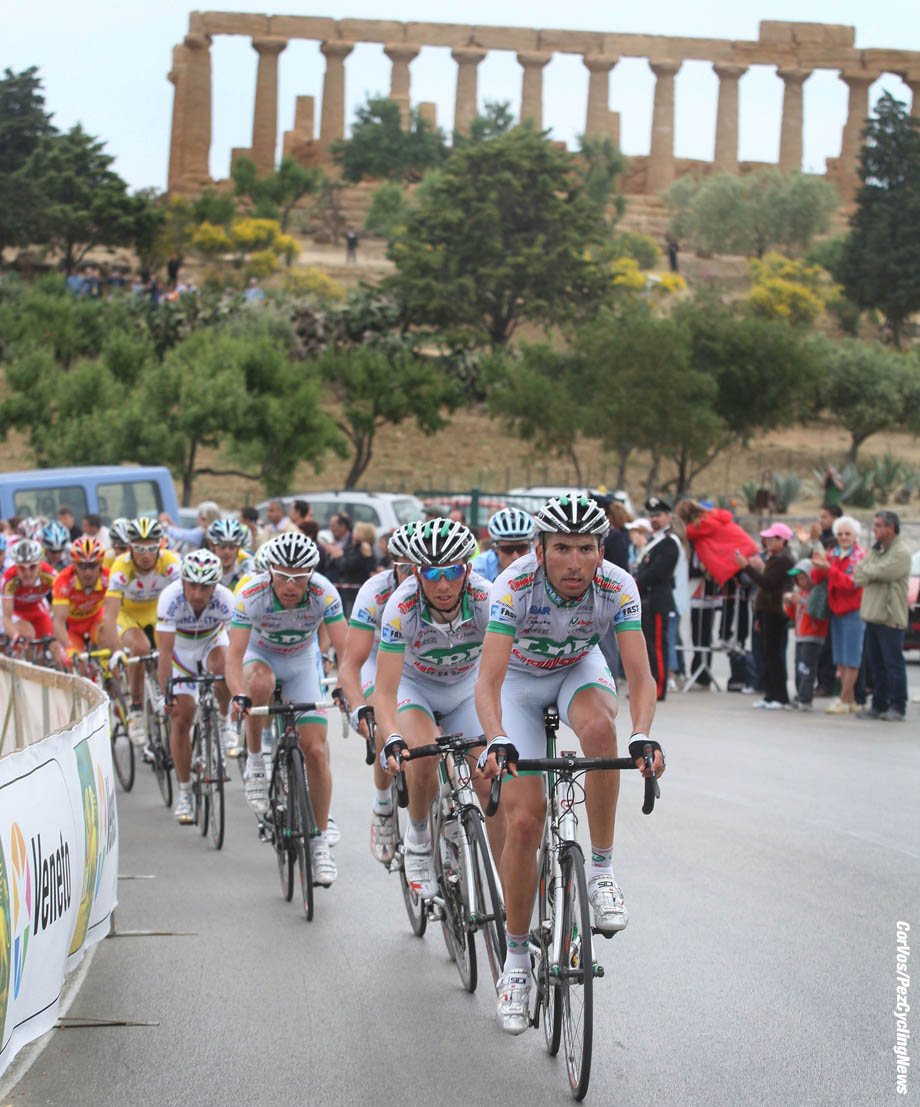 The SIDI Champions Going to the Giro d’Italia Number 100