Rider Blog: Introducing a new member to the PEZ Crew: Jason Saltzman from California, who will be riding for the Austrian Sport.Land Niederösterreich UCI Continental team in 2020. Jason will be giving us the low-down on his Euro season with regular diary up dates from the peloton through out the year. In his first article we learn how it all came about. 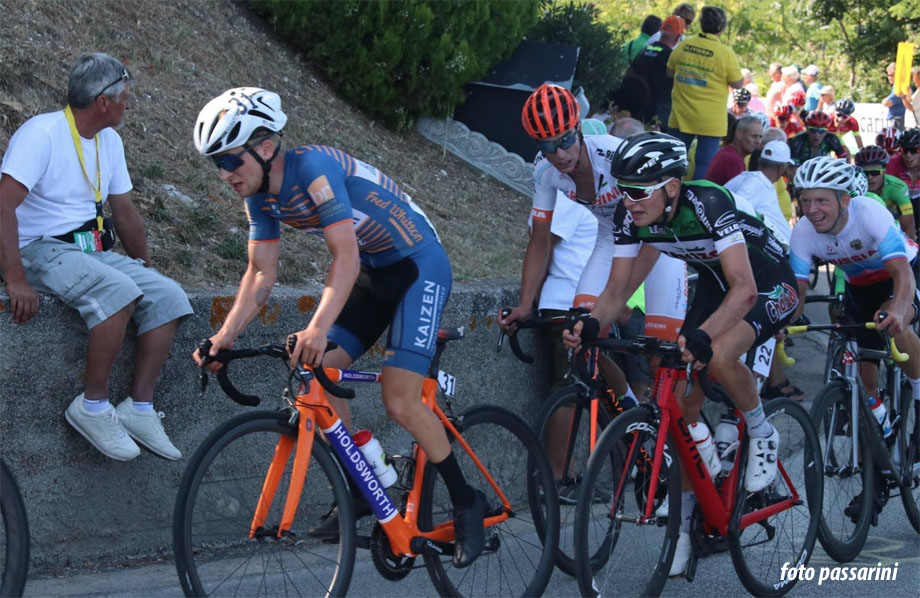 GP Capodarco, one of my last races in Italy. I raced, going for broke, to crack the top 10 in an UCI race and got dropped out of the winning move with a lap to go… you never know if you don’t try

So how exactly does an American bike racer end up on a team in a country he’s never been to? What does he want to accomplish? And what bridges the gap between hope and reality? During 2020, this blog will attempt to answer these questions.

I am a professional cyclist from California racing with the Austrian team, Continental Team Sport.Land Niederösterreich. For more than half my life, I have been exploring my limits and where my limits place me within the hierarchy of bike racing. This exploration has seen me graduate from the junior ranks at the end of 2015, race professionally in the US from 2016-18, and move to Italy for the 2019 season. Each year has been its own step in my development as a human and bike racer. 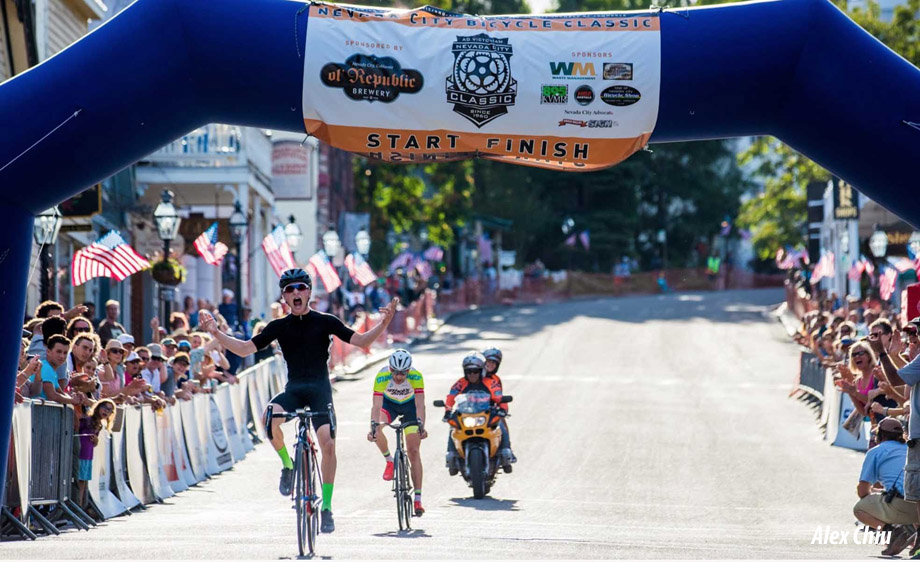 Winning Nevada City Bicycle Classic, the highlight of my 2016 season with Team Illuminate and a performance that earned me a feature in Road Magazine’s “Faces of the Future” edition

Alongside my cycling, I am 3/4 of the way through a degree in Economics and Psychology, from Claremont McKenna College (located below Mt. Baldy of ATOC fame/infamy). I attend school for the fall semester (September-December) and focus 100% on racing the rest of the year.

For 2020, I am out of the u23 ranks, the traditional epicenter of developing professional cyclists. Following my experiences in Italy last year, as the only American in the majority of the races I did, I believe I have a unique story to tell as I fight to find my place in the sport of cycling, and, more generally, as a lone American abroad. My path towards (hopefully) the upper echelons of the sport is not standard and may provide an interesting look into the pursuit of finding one’s personal best and where that leads.

Heading to Europe, I want to answer the first question posed above… how did I get here and why am I still “chasing a dream” against improbable odds?

Exiting the juniors in 2015, I had shown promise and wanted to see how “good” I could be. Highlights of my final year as a junior were competing in the Pro/1 races at San Dimas and Cascade, multiple top 10s at national caliber junior events, and a handful of wins and podiums in the toughest NorCal P/1/2 races, including a podium finish at District Championships. The mysterious USAC rankings listed me as the 2nd junior in the country. Despite the results and ranking, I was largely ignored by the national team system. As has been too common in recent years, I graduated the juniors into a “tough market”. 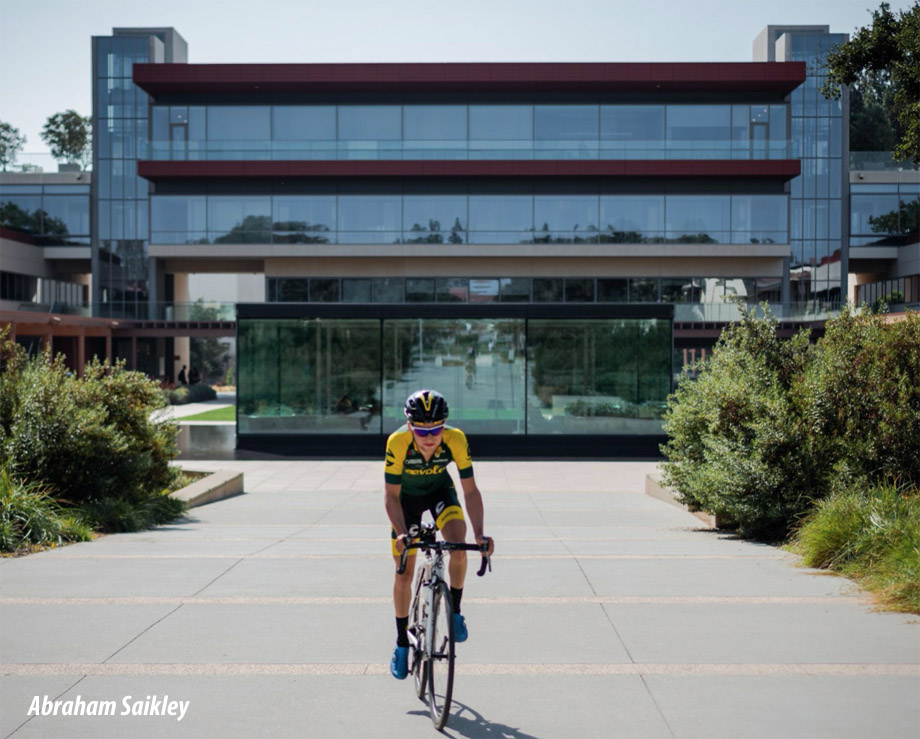 Eventually, Team Illuminate made an offer that provided me the opportunity to race top domestic races while allowing me to graduate high school. My 2016 season lacked direction, but I gained valuable experience at races such as USPRO Championships and the Philadelphia International. I continued to show promise on the local Northern California scene, including a win at the infamous Nevada City. While Team Illuminate provided the opportunity to do high level domestic races, I needed more structure and mentoring to fully develop as a racer. I was yet again searching for a home.

As luck had it, Mike Creed recognized the need for a u23 development team and invited me to join newly formed Aevolo. Aevolo’s freshman season paralleled my freshman year at Claremont McKenna. To cut a longer story short, going to school full time and racing your bike at a high level is hard and I struggled to give 100% to either endeavor. Admittedly, I also was overcome by both a certain complacency in training and racing and a lack of confidence as I learned the ropes of the PRT scene. The combination of school and sub-optimal training resulted in racing not to “waste” energy, to “survive”. I didn’t take chances to succeed, or carry my full load as a teammate because I didn’t trust that I had energy to spare. To be brutally honest, I had allowed my promise to go stagnant. 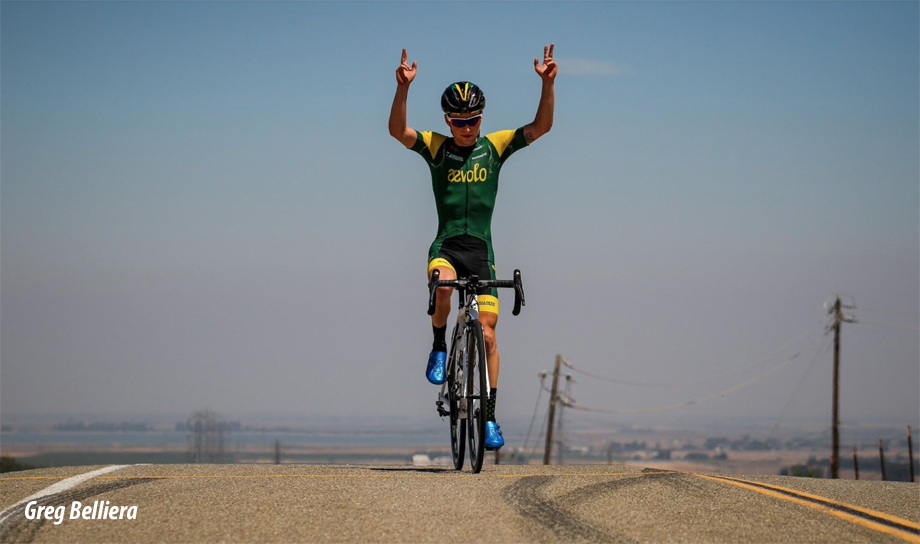 By the end of 2018, despite a slow start and missing out on selection for the races in Utah and Colorado, I was in the form of my life and on a tear at the late season, local races

Back with Aevolo for 2018 and taking the spring semester off from school, I felt I was taking the steps to both renew and act on my promise. Focusing 100% on racing without fixing underlying issues in training was not enough. After another slow start to the season, Creed had a frank conversation with me. I knew I needed to make changes. The changes came too late to salvage my season. Despite being the fittest I had ever been come the Tour of Utah and Colorado Classic, I was left off both rosters. Missing these races and the decline of US racing begged the question of what I could do to “keep the dream alive”. 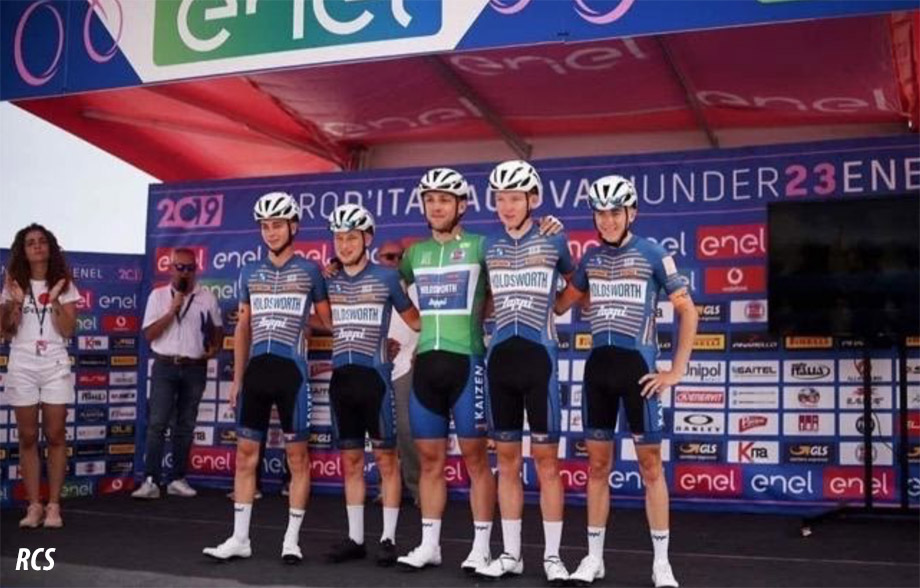 Team presentation before Stage 1 of the Baby Giro. Charlie Quarterman (now Trek-Segafreddo) had placed fourth in the opening prologue and was wearing the points jersey as a result

I chose to head to Italy and tackle perhaps the most hotly contested u23 racing in the world. The Holdsworth-Zappi race calendar has to be among the best of any u23 amateur team. It took me a bit to adapt to the team’s style of training and Euro racing, but after a handful of races, I was finally implementing the “race craft” that Creed taught at Aevolo. I was making the front group in some of the hardest UCI1.2U races in the world and by late April I was starting to feel like I belonged in these races and could contest for placings. After an altitude camp in an RV atop a stormy, desolate mountain, I came back ready to perform. A string of good races earned a spot on the u23 Giro squad. I came into the race flying high. But with the highs come the lows and a combination of crashes, mechanicals, and domestique duties in the first few stages left me fatigued and groveling.

The Baby Giro marked the end of the first part of my season. In prepping for my last handful of races I knew that a) the difference on any given day between my top 20 results and the top 10 or 5 wasn’t all that much, b) I could close that gap, and c) a few really good days/results could earn an European professional contract. After a great block of training, I entered the last few races knowing that racing smart, I was capable of getting results. And I almost delivered. While the podium eluded me, I had great races at Gran Premio Sportivi di Pogianna, GP Capodarco, and Giro del Casentino. In each race I contested placings with multiple riders who are now PCT or WT riders. I finished the season knowing the promise is still there and I am hungry for more. 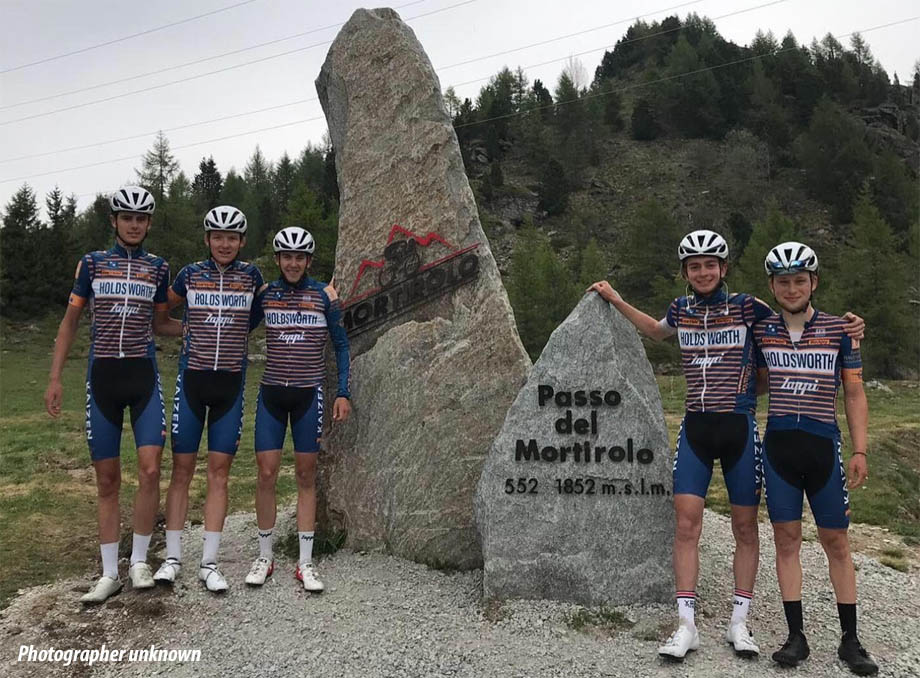 The top of the Mortirolo while preriding the queen stage of the Baby Giro, which featured a double ascent of one of cycling’s hardest climbs

So, when figuring out what my options were for 2020, I knew I wasn’t ready to say that “I had tried and that was it”. I knew that if I stopped racing now, I quit playing Peter Pan and went back to school full time or even came back to the dying domestic scene that I would be doing myself a disservice and would eventually face question of “what could have been?”. I believe that if I combine the experiences of my four u23 years, both training and racing, that I am capable of those really good days. So, with a lot of emails, phone calls, Instagram/Facebook messages, and all-around hustle, I found a home in Austria with a “startup” Conti team that, much like myself, has something to prove. So, as I get ready to fly over later this week, with all of the opportunity that a new season brings, my 2020 season also comes with the recognition that “you can only get so far on potential” and that this is the year that my “promise” as a bike racer either gets fulfilled or disappears. To be cliché, 2020 is make or break. Make… or break… I hope you choose to follow along as I post about my experience(s) in the wacky world that is professional cycling.

# Jason will be keeping us up to date on his adventure through the season. # 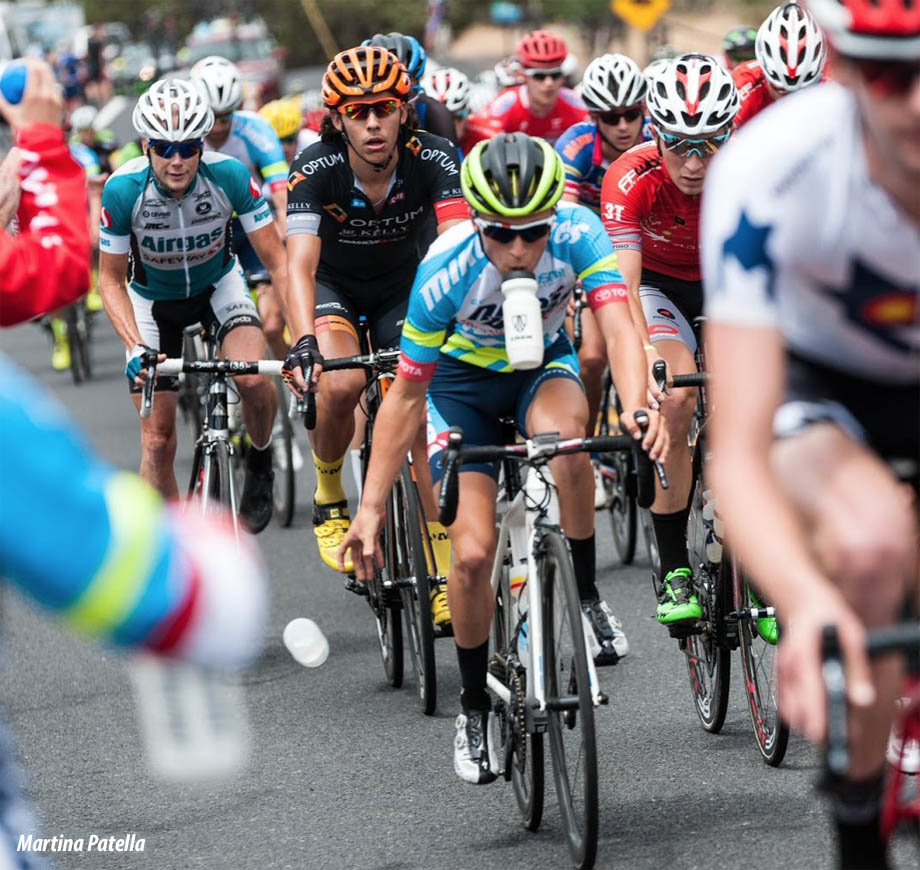 Riding the Cascade Classic in 2015 as the only junior in the Pro field. Two riders behind me is former Vuelta winner, Chris Horner during his tenure on the Airgas-Safeway team that would evolve to become Team Illuminate and my home the next year

Ed on the Boards: Three Nights in Copenhagen