During the Armstrong era Johan Bruyneel was showered with accolades – genius, mastermind, a new age guru they called him. Heady stuff. But 2006, without Lance Armstrong, is going to be a brand new Tour. And already, under the cold winter skies of Belgium, the cagey Belge has to be feeling the heat.

Will he play all his cards in the classics and the Giro – races that are important to cycling but don’t deliver a payback to an American sponsor hungry for the TV viewers that only the Tour de France can bring – or will he risk it all on an improbable podium in Paris? 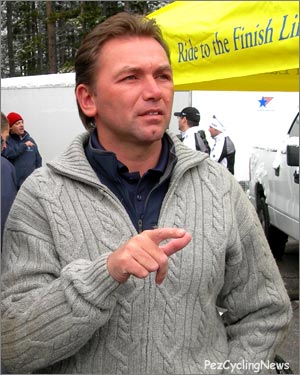 Bruyneel was cool at the Tour of Courage last
September, but you can bet he was already looking
ahead to planning his team’s 2006 strategies.

2006 – It’s All About Bruyneel
Let’s start by saying that Johan was smart enough to never take too much credit for Armstrong’s success. In fact he was always quick to point out that he had only played a small part in each of the 7 Tour victories. But winning the Tour de France is a year around occupation and victory doesn’t come by chance. Putting together a winning team, keeping the riders motivated, hitting the start with everyone in peak form, and managing the racing strategy over 21 days en route to Paris are the hallmarks of a top-notch Directeur Sportif. So when Bruyneel deflected some of the praise he had earned over the past seven years was he being overly modest – or just positioning himself for a future sans Lance? 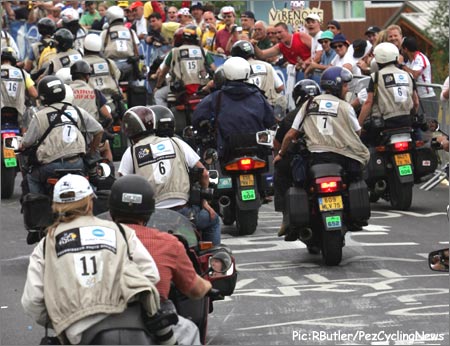 A Hard Day’s Night: Johan’s task to gain his sponsors the all-valuable media exposure in 2006 could be his toughest gig yet.

Le Tour – It’s a Business
Bruyneel had always said that he didn’t have a replacement for Lance Armstrong – and that there wasn’t one in the pro peloton. It will likely be a very long time before another rider dominates the Tour de France the way Armstrong did. But that was then and this is now. In a few short months Bruyneel will forego the pleasure of looking back on his role in an historic 7 Tour wins and begin to deal with the pain of unreasonable expectations – because like it or not, he is going to be expected to fill the shoes of Lance Armstrong.

In the smokey cafй-bars of Belgium, where local knowledge of cycling is as old as the pave itself, Bruyneel’s legacy as a DS is already well established. But the average American won’t be too interested in watching the Tour unless the grey and blue train is up front. Discovery is paying for eyeballs and in America, only the Tour de France delivers eyeballs. This is the Tour de France – and it’s a business.

Re-Discovering Discovery
The Discovery Channel Team’s re-branding process began with the recent announcement that George Hincapie might be a protected rider in the 2006 Tour. A great rider for sure – but not necessarily Discovery’s most likely candidate for a top finish in the Tour. So why not Yaroslav Popovych who finished ahead of Hincapie on GC in 2005? Or Ace Azevedo who was 5th on GC in the Tour in 2004? Or Giro campione Paolo Savoldelli? Well for starters they aren’t American and that won’t play on Discovery’s up-close and personal.

Big George could be the ace in the hole: having helped Lance win 7 Tours he’s got loads of experience, and 2005 showed he just might have the engine to take on a Grand Tour for himself.

Quel Probleme
So Johan has a problem – he’s trapped between the expectations of an American sponsor and the reality of competition. Good thing he has choices. You have to hand it to Bruyneel and the rest of team management. They have a succession plan that would shame most of the Fortune 500. Disco has more than 9 Tour veterans to choose from. Amongst them is a Giro winner, stage winners, and one of the best one-day riders in the business. Plus they have guys like Michael Barry who has already proven himself in team victories in both the Vuelta and the Giro. And as luck would have it, Barry is one of only two or three likely Tour candidates that live in the USA – not bad for Discovery’s domestic TV audience.

So at this point Bruyneel’s problem is one of asset allocation. Should he send his troops into battle hoping for a victory in the Giro, or should he keep his powder dry until the Tour? The Giro won’t bring the TV audience that only the Tour can deliver – but a podium in the Tour looks like a tall mountain to climb at this point.

Can ’Ace’ Azevedo up his ante from super-domestique to Grand Tour contender?

Discovery Plays Poker
You have to know Bruyneel desperately wants a win in the classics – first for his boys and second because it will take a lot of pressure off him. If he can follow with a podium in the Giro, he can head into the Tour having already fulfilled the criteria for a successful season in the eyes of cycling aficionados – at least in Europe…, but there’s still that pesky American sponsor looking for Tour success.

Johan played his first card early, penciling in Il Falco for a second consecutive Giro victory attempt in 2006. And to help with the cause he recently assigned former Lance lieutenant Triki Beltran to ride shotgun in the high mountains of Italy – a card he might not have played if he thought he could win the Tour in July. 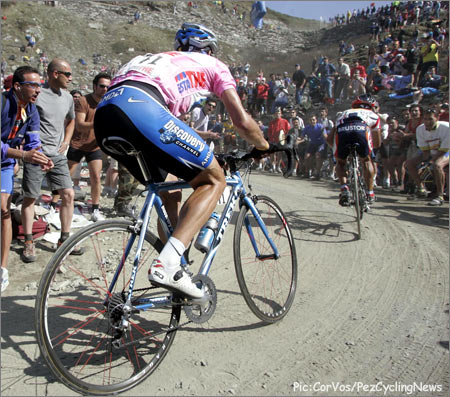 With two Giro wins, Paulo Savoldelli is the academic choice to lead the team at le Tour 06, but can he make that leap?

Double Down – Don’t Blink
Having already burnt a match in the Dolomiti, Bruyneel will be left with Big George and Popo to lead the Disco boys into Paris. Still, Bruyneel has a few cards to play. First he can try for opportunistic stage wins with Hincapie, Popo, Savoldelli and Azevedo – all legitimate threats on any given day. And the possibility of a team victory isn’t so far fetched either. As for a podium in Paris, with 3,600 km’s of racing nothing is impossible. After all, it’s a brand new tour.

For now Bruyneel is holding his cards close to his chest. But when the Tour gets underway without Lance Armstrong, Bruyneel will have to play the cards he’s been dealt – the true test of a DS.