Canadian Everest Record: Some ideas just sound crazy – Everesting could well be one of them. But when Team Elevate-Webiplex pro Jordan Cheyne’s buddy, Braden Kersey, suggested going for the Canadian record… ‘Why the hell not?’ was the answer. Here is how the daring duo’s day went. 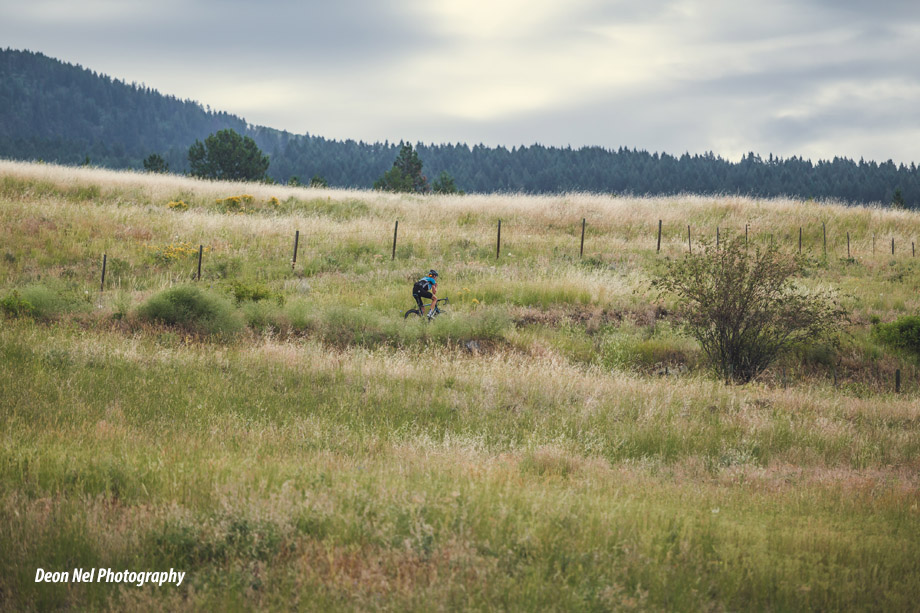 Looking Up at Everest
“Guardsman… no Empire Pass, yeah that’s what this feels like”. That was the internal dialogue I was entertaining as we pre-rode our selected Everesting segment on Saturday. It’s a little unnerving, just how much of my memories are dominated by racing. As soon as we hit the steepest gradient on Beaver Lake road just outside Kelowna, BC and I felt the blast of summer dry summer heat on my back I immediately thought about the Tour of Utah. That is the one race where we climb ridiculously steep roads in searing temperatures and perhaps most fittingly, suffer like dogs for hours on end. My young coaching client and frequent riding buddy Braden Kersey and I only did a couple reps to mark the road and measure elevation but it was enough to bring back that feeling, a little appetizer for the next day’s main course. 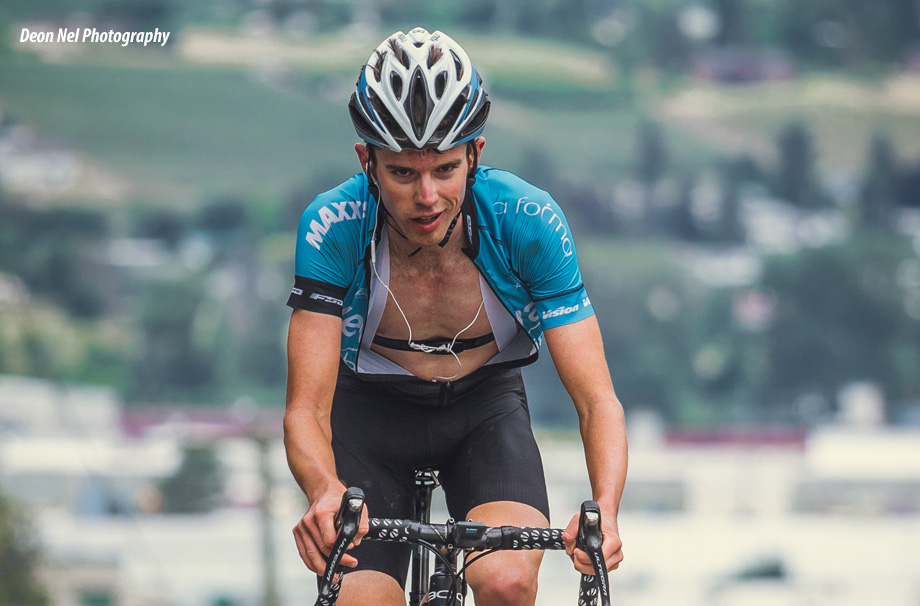 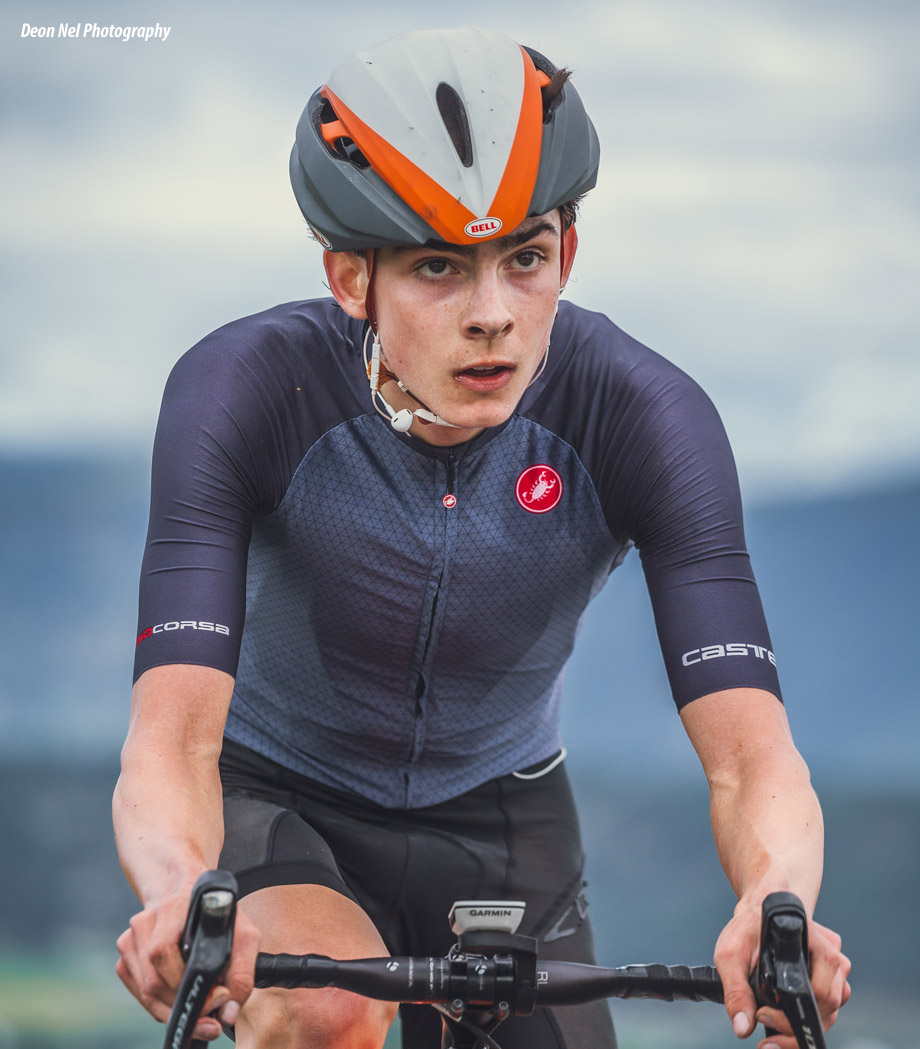 Changing My Mind:
I have to give Braden a lot of credit here, in one quick text exchange he turned me into a complete hypocrite on the topic of Everesting. I have seen people do it over the past few years and most recently witnessed rising star Jacob Rubliak break the Canadian record on Knox Mountain here in Kelowna. “Why?” “Just stupid” “I know how much that is going to hurt and I want no part of it” were my typical refrains. I even said that maybe I would do one “but no way am I going to race it, I want to enjoy the challenge”. All of that changed when Braden said he wanted to try to break the record and go under 9hrs for the 8848m climbing challenge. I don’t know why but when he said he wanted to take a crack and soon, my mind changed. “Why?” changed to “Why the hell not?”. 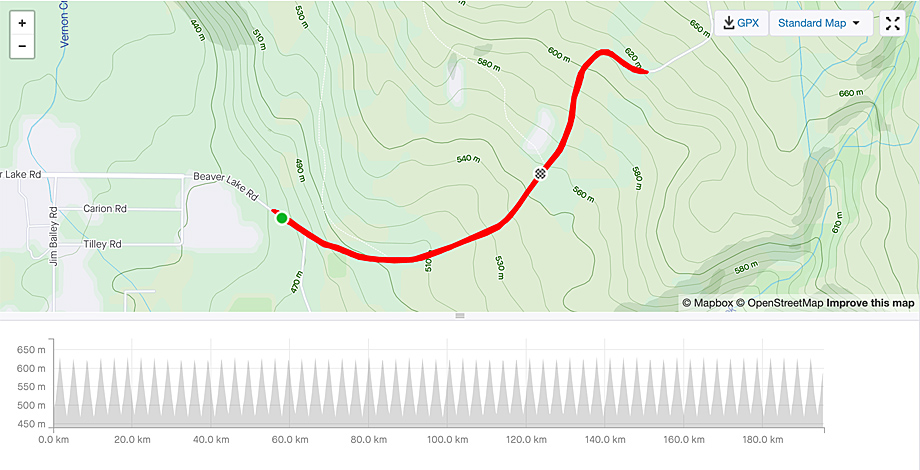 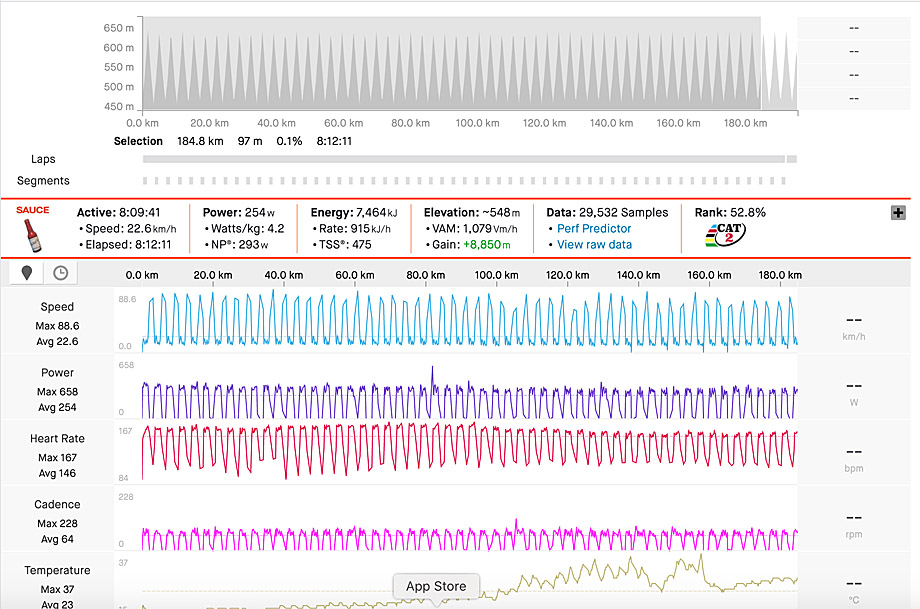 That conversation was on a Monday. We quickly looked at the long term forecast and decided we needed to do it that weekend as the Okanagan summer heat is due to reach its peak in the coming weeks. 30 Celsius is hot but wait any longer and it would be 35 or even 40C and that is suicidal. So, I dropped the idea on my wife Emily and she agreed to help with a slight eye roll at my impulsiveness. Braden’s parents and friends would pitch in with a tent and feeding assistance as well which was absolutely crucial. I think you can Everest unsupported or you can Everest fast, it’s very hard to do both with the need for constant refuelling, hydration and moral support. 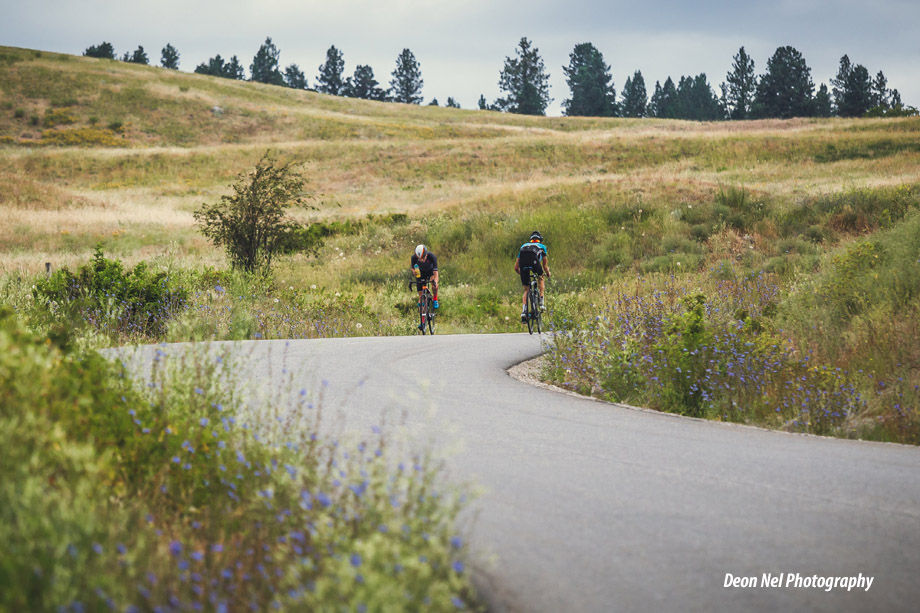 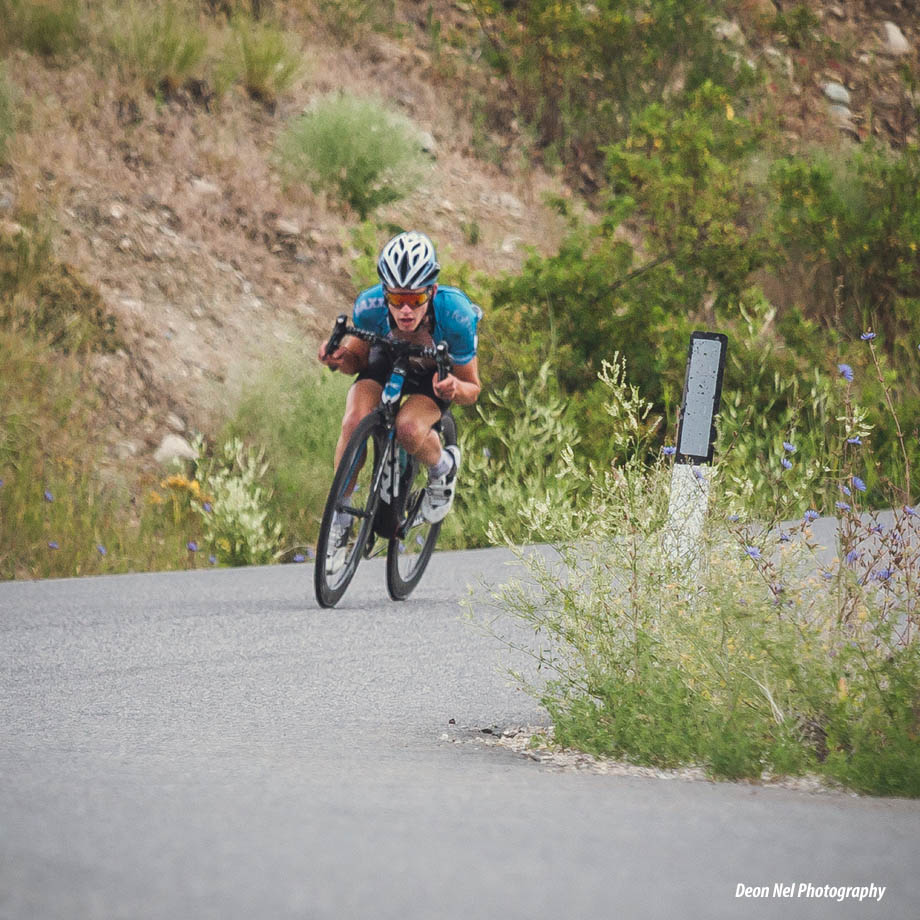 The Fun Part:
I trained normally for the first half of the week and then rested well on Friday and Saturday, trying to put as much energy into my body as I could for what would unavoidably be the most draining day of my career. We left my mom’s nearby condo while it was still dark and Braden and I nervously milled around for only a few minutes before we started at 6:07 am. There was no time to waste with the heat coming later and really nothing to do other than start climbing that damn hill. 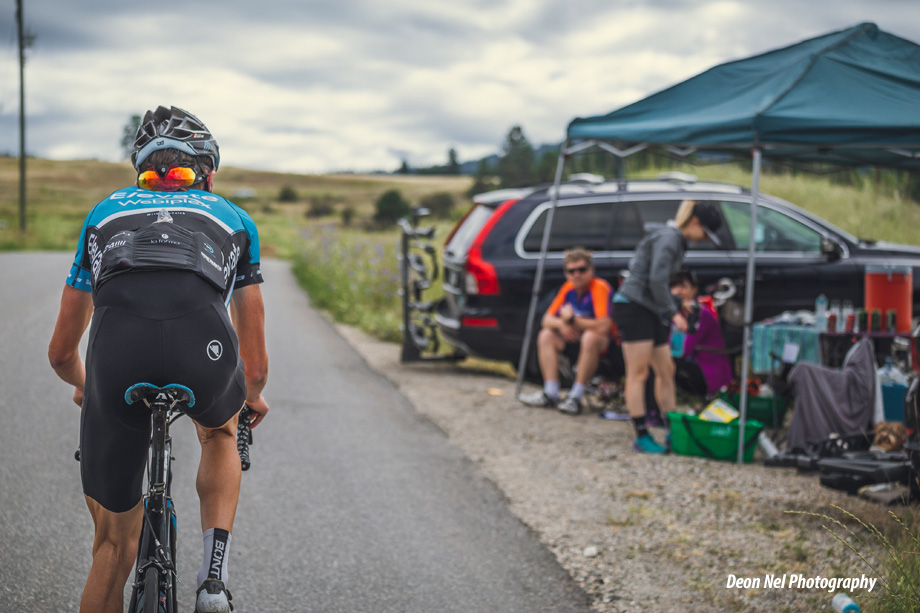 I knew we could break the record on this hill with room for error. At 1.6 km and 9.5%, the straight stretch of road just outside the Winfield industrial park was much more conducive to speed than Jacob’s climb. That climb up Knox Mountain is iconic in these parts but is only 8%, features multiple turns and lots of pedestrian traffic. Our segment was still not steep enough for a world record with the fastest times coming on climbs of 11-13+% but it was the best we could do in the area.

My strategy was to set off at a fairly hard pace and bank time before the sun reared its ugly head and slowed us down. There is no avoiding the impact of heat when your average climbing speed is barely out of single digits. That strategy went well, I was a little fast on the first lap at 355 watts but soon settled into a rhythm at 320-340w for the first 15-20 reps or the eventual 55. I eased a bit after that but I hit halfway somewhere around 3 hours 50 minutes which I was very happy with in terms of banking time. It wasn’t so rosy after that. 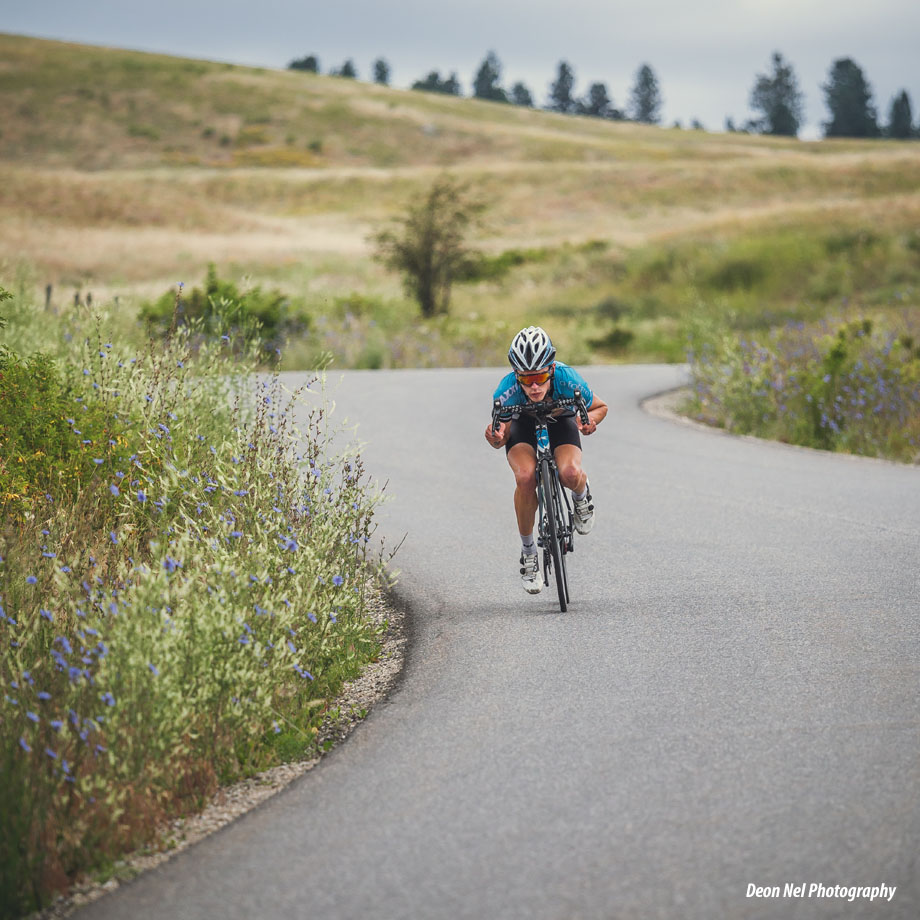 The Suck
I predicted exactly what was going to happen next the day before but that didn’t make it feel any better. Between 4500m and 7000m climbed it got hard-really, really hard. The heat had come to stay and every part of my body started to hurt in concert. My feet were swollen, my back ached, my arms and hands cramped, my legs deteriorated and I made a habit of puking up most of the fluid I drank at the top of each lap. Mentally, it was a meditation on boredom and doubt. There was a point for me where I had climbed more than I ever had before and also had more climbing ahead of me than I had ever done. That is a tough spot. 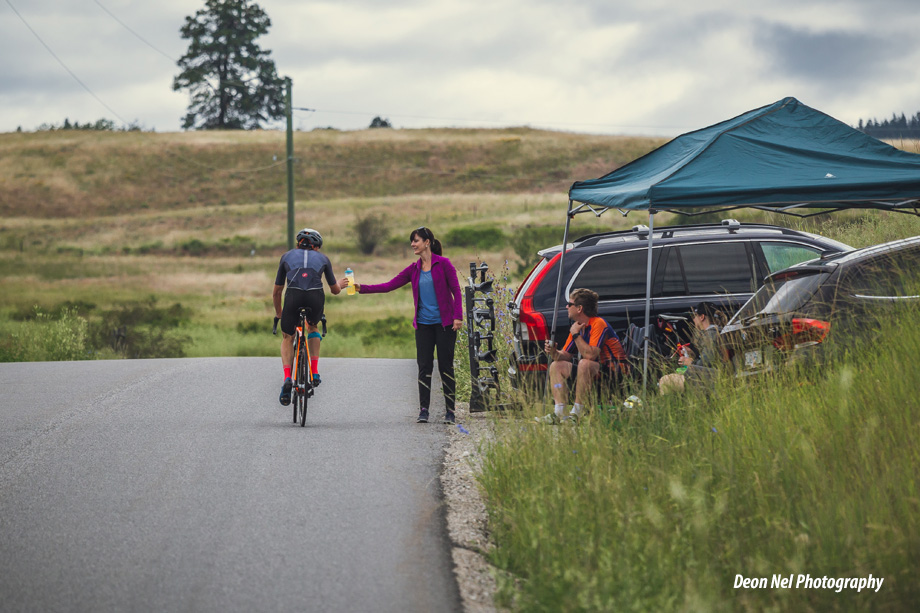 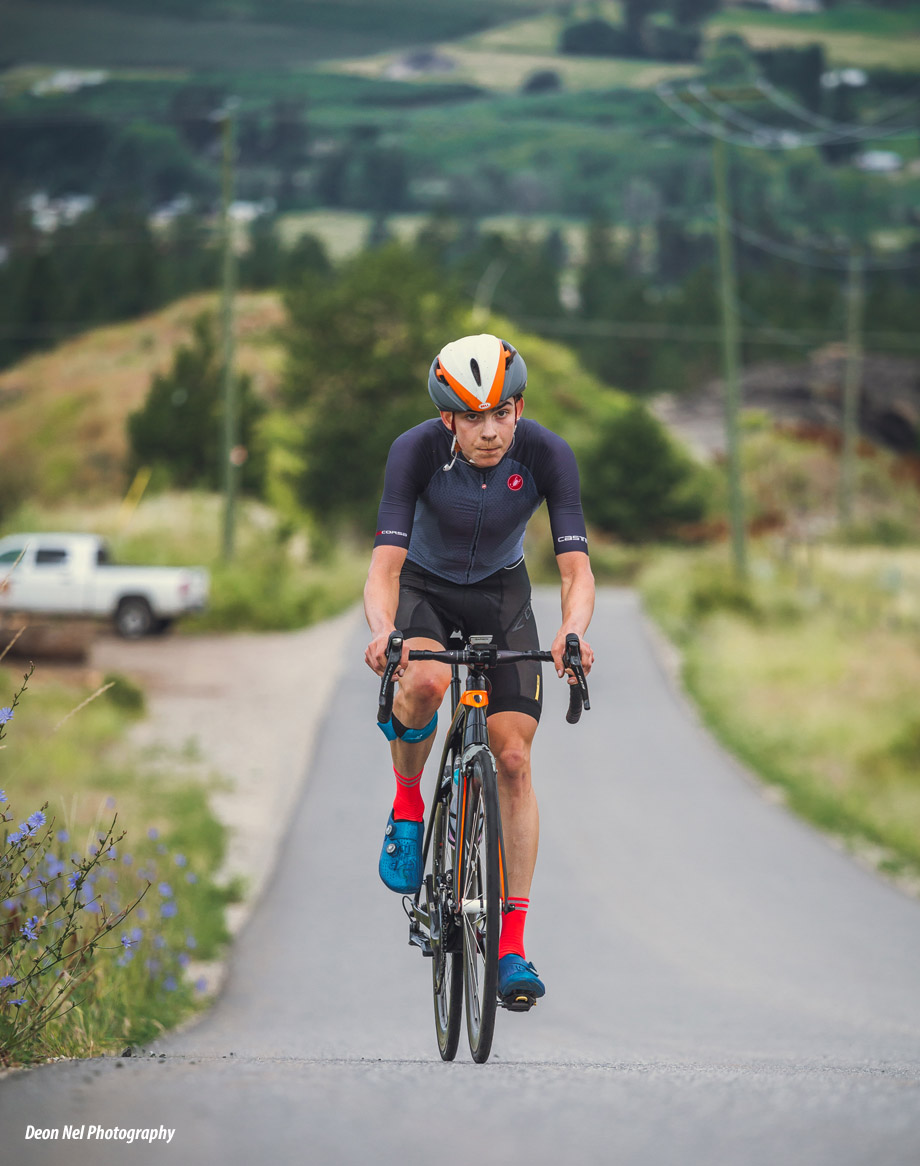 I battled through with the help of constant refreshments from our crew, dozens of bottles consumed and dumped over head and the gracious support of several friends riding alongside. I had my coaching clients and friends Deon and Helena and even a few laps with the man himself Jacob Rubliak who had somehow found out about our secret attempt. The reps passed, the meters accumulated and somewhere around hour 7 I could feel the finish start to pull me in. 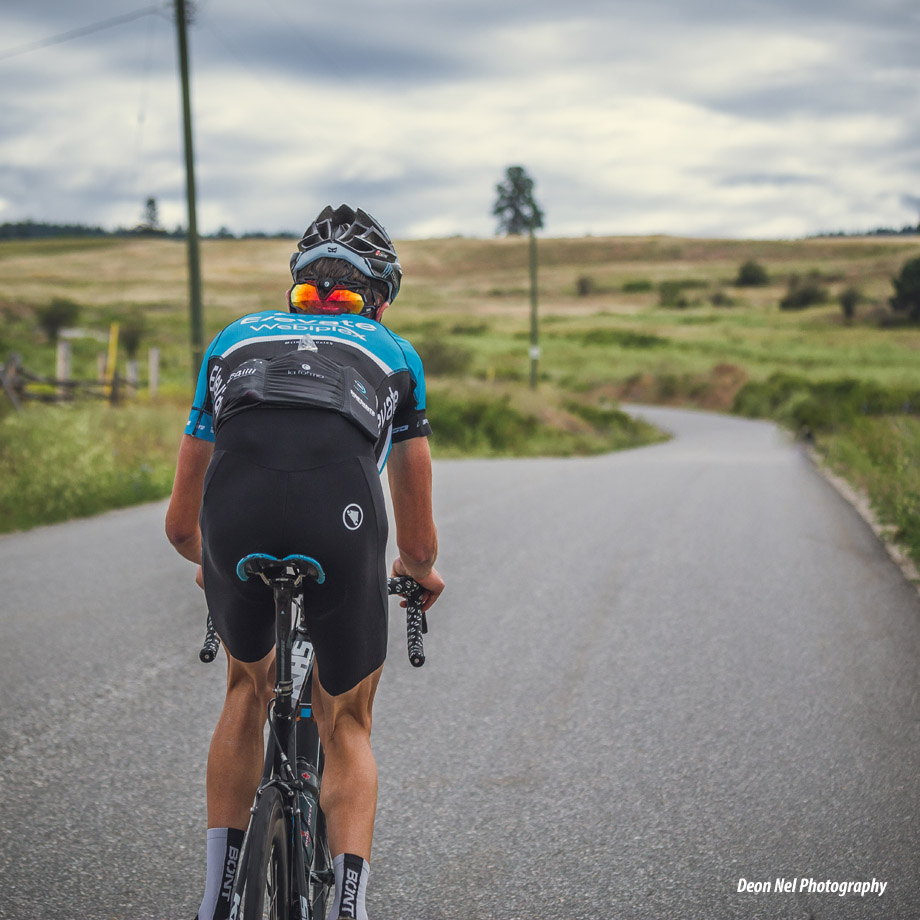 The Finale
Those last 1500-1800m weren’t easy but I was calm knowing that I could get it done. I started taking little 10-30s breaks at the top of every 2nd or 3rd climb to reboot mentally and force food down. One thing I never considered was the total lack of mental reprieve in the effort. The descents are a physical recovery but you can never rest your mind transitioning from a 10kmh grind to an 80 kmh super tuck on what turned out to be a busy weekend road. 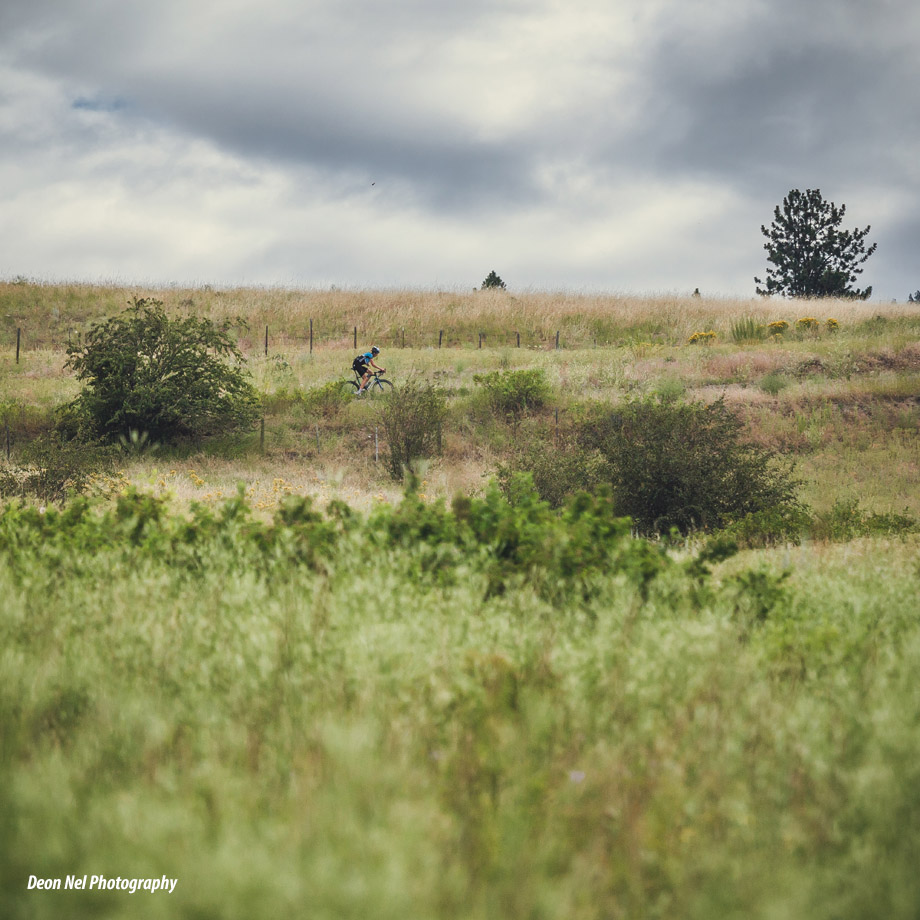 With those little breaks and the magical feeling of counting the final down laps I got there. I never watched my total time during those last hours-it felt like there was nothing I could do about it anyways. My screen only had my power and the total elevation gain. I was able to muster a stronger final lap at almost 320w and finally clicked over my Wahoo screen to see my time: 8:12. There was a moment of disbelief and a mild elation tempered by exhaustion and relief. I then set about doing another couple more grinding laps to make certain that I would get the total elevation required even if there was an error in our calculations. Finally, it was over. 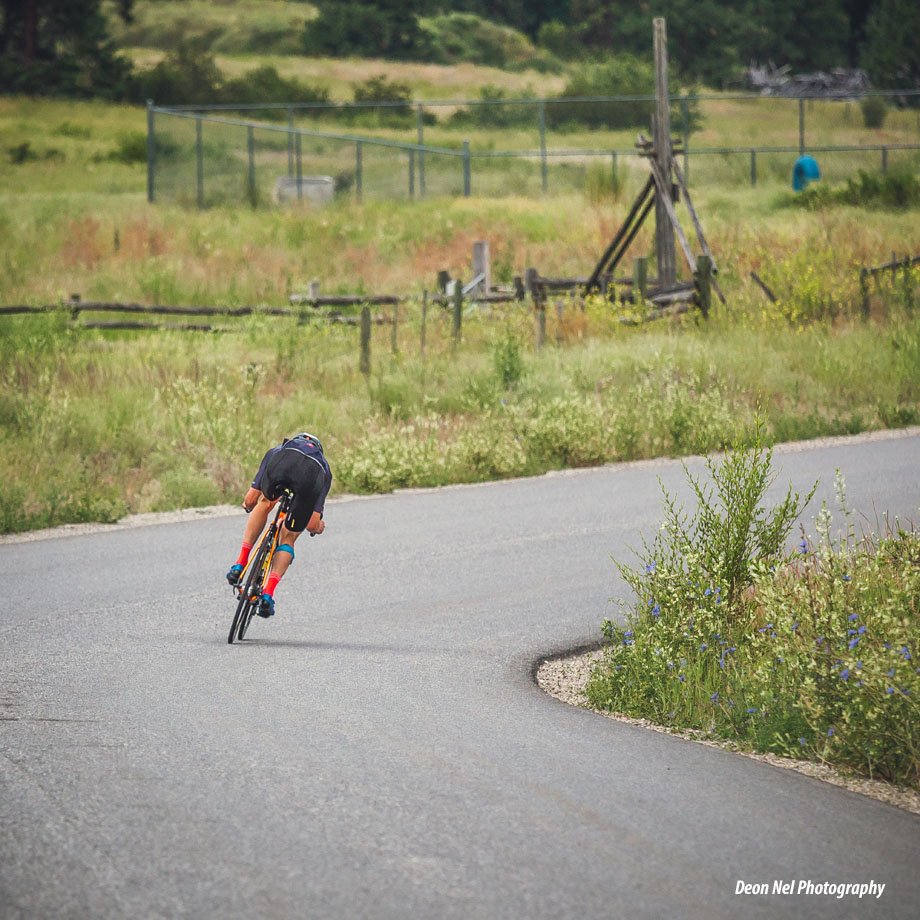 The pain actually got worse when I stumbled off the bike and into a lawn chair under our tent as my muscles revolted and my head pounded. I greeted our dog Knox but he didn’t seem too enthused with my result after an afternoon in the heat. Watching Braden press on and finish his own effort was a welcome distraction. Despite struggling mightily in the second half he still posted a stunning 8:58, accomplishing his goal for a sub-9. At 18 and only training as a pure cyclist for a year, that is a hugely impressive effort. 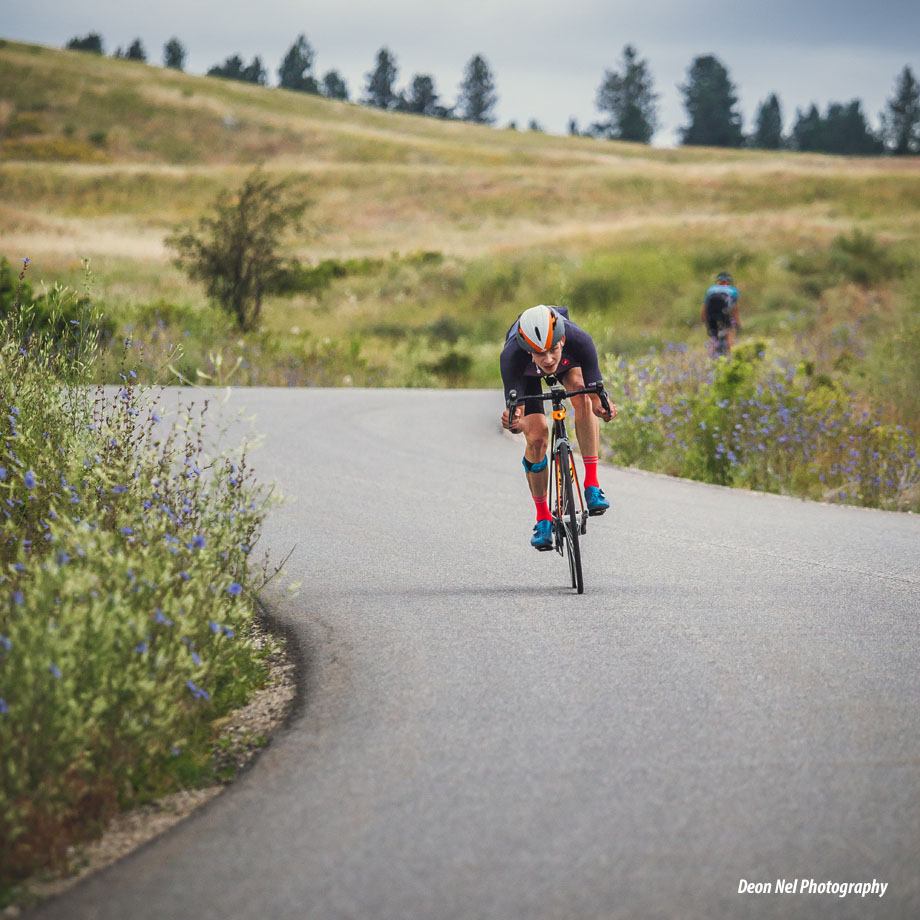 Going Forward
I said I’d never do an Everest and immediately afterwards I said I’d never do it again. The first was a lie and the second might be too. It was the hardest day I’ve ever had on the bike but there is nothing else quite like it. I’m glad to have taken it on, pushed myself over the edge and back again and done it all with great people. It will be awhile, but maybe just maybe this stupid idea will seem like a good one and I will look up at Everest again. 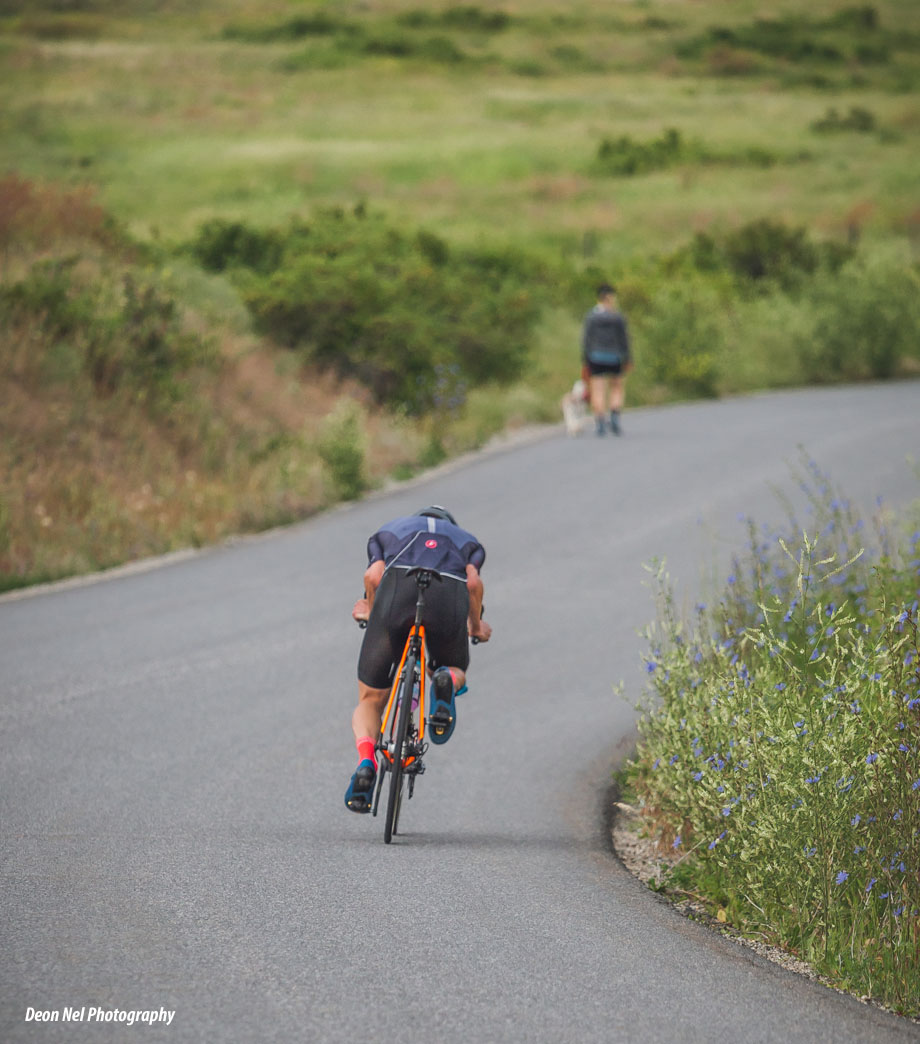 Thank You:
Even though this was a personal venture I couldn’t have done it without the top notch support of Elevate-Webiplex and our sponsors. On the day I used a 4iiii dual sided power meter, Vision Metron wheels, Maxxis High Road tires, a KHS Flite 900 road bike, Velo saddle, Xpedo pedals, La Forma kit, Bont shoes, FSA components, a well ventilated Kali Protectives helmet and more than one bottle of Monster Hydro sports drink. Thanks to all of our sponsors for supporting us through this unconventional 2020 season.

# A big thank you to Deon Nel Photography for the top pics. # 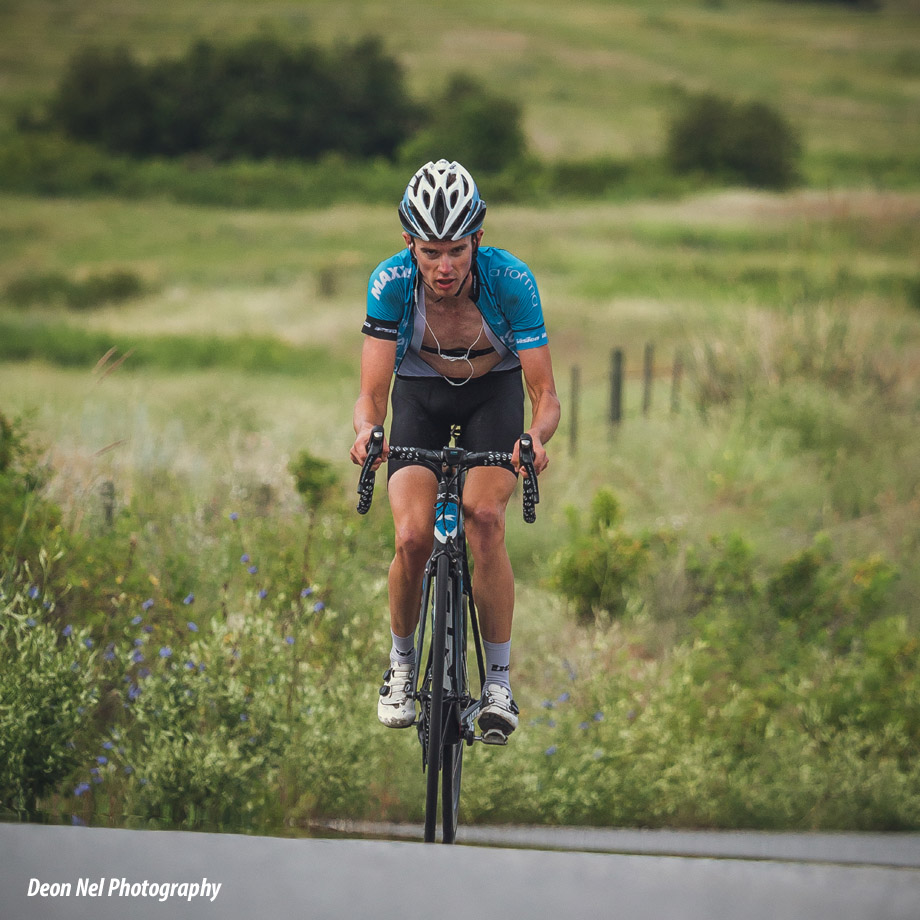