Once a year cycling scribes around the world put down their note-pads and rinse out their ink pots, don a skinsuit and let their legs do the talking (for once) at the Journalist World Championships. PEZ Joined this year’s battle at Lac de Vassiviere in Central France to fight it out for the ultimate in Press supremacy… the rainbow jersey!

Worlds For Journos?
PEZ Sez: Although not well known amongst the general cycling public – the Journalist World Championships have been on my own personal radar for the last 5 years. The thought of a PEZ-Man as World Champ has haunted many a dream for me… All I needed was a writer with the legs for the task, and who lived near enough to make participation a real possibility. After six years of publication, we’ve built up a truly international network of contributors, and this year the planets aligned as we had not one, but two qualified riders near enough to race it up. 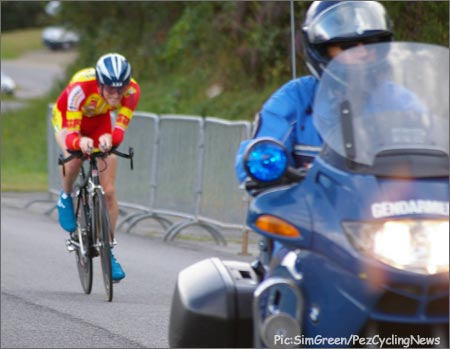 Sim wore his regular team issue skin suit for the TT – better to keep the PEZ kit clean for the road race.

Jered Gruber – my trusted assistant editor has relocated from Georgia to Austria, to pursue his dream of a full pro contract, and Simeon Green – our ex-Pat Brit based in and racing in Southern France, both have the legs and fly the PEZ colors and do us proud. Unfortunately, Jered’s team had him racing elsewhere, but Sim was cleared to go and took the train to Lac de Vassiviere last Thursday. The event was a two day affair, with a 12km individual Time Trial on Friday, and a 70km road race around the same Circuit Raymond Poulidor on Saturday. Simeon picks up the story… 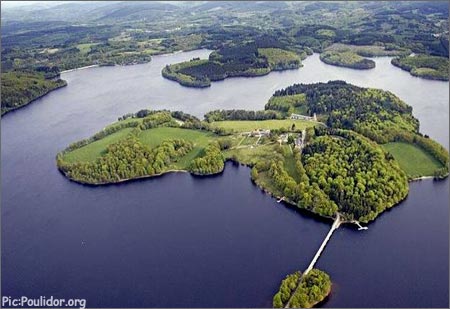 Riders or Journalists?
Riders… I mean journos… I mean riders, had come from afar for the Mondial de le Presse 2008 on the Circuit Raymond Poulidor that was used to host a stage of the Tour de France as recently as 2004. Other riders to have left their Tour de France mark on the area include none other than Miguel Indurain and Greg Lemond. Oughh, you could smell the cycling history and feel it running through the veins of the Lac de Vassiviere! 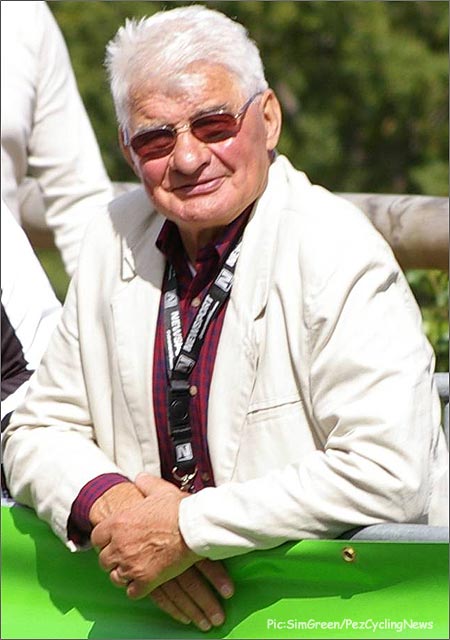 The great Raymond Poulidor was our host.

The two strongest contingents present for Journo Worlds were undoubtedly the Slovenians and Belgians. The Belgians in particular looked pretty darn snazzy in full matching national cycling kit and National Team track-suits… the Slovenians also had matching National kit, but alas were lacking the all important “Euro-Cool” tracksuits. Also present were riders… I mean Journos from publications such as Pro-Cycling, Cycling Plus, Velomag.net, Radio France as well as many riders from the non-cycling press. Among this gaggle of national colors and foreign languages, the keen eye will have spotted… yes you guessed it, PEZ! 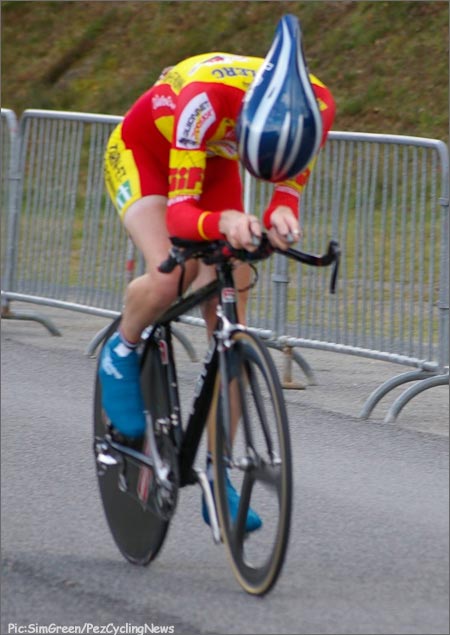 Day 1: Time Trial World Champs
The weekend kicked off with the all important ‘race of truth’ at Journo worlds. No, the race of truth isn’t to see who can get their articles on the shelves of your local store the first, nor is it to see who can type 1000 words in the least time. The Time Trial course was a pretty typical French/European TT course. The first half was up and down with a few corners; in other words, a constant change of rhythm with stop-start type efforts. The second half was more straightforward, with slightly longer hills, less corners and a steadier, more flowing feel all the way to the slightly uphill finish line. 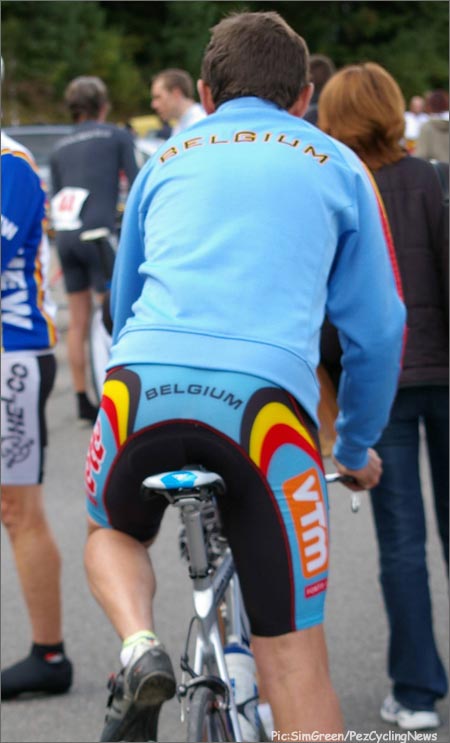 The Belgians take national representation very seriously… at least when it comes to kit.

Kit
Although some riders were heading out on the TT on their standard road bikes, some riders had it all… There was some pretty sweet kit out there on the day. I was aboard my trusty (and now slightly aged) Ferrus TT bike with a Tri-Spoke on the front and an old Team Bonjours (you know, before they became Brioche la Boulangere and then Bouygues Telecom) disc I borrowed from my regular Team for the event. I felt my best chance of pulling off a result this weekend would be in the TT. I’d ridden the 12km course a couple times the day before, as well as on the morning of the event… so I was ready. I warmed up on the trainer until 15 minutes before my start time… put on my disc and LAS Aero helmet and checked everything was shifting well. I was calm, collected and ready to rumble. 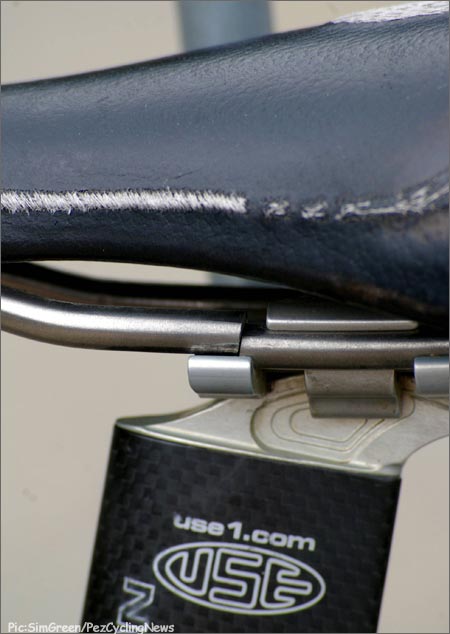 Bad things come in twos?
I started the TT and was off to smooth start, when I heard this really loud “CRACK” from my bike. I wondered if I had broken the frame, but although something felt a little spongy, I couldn’t figure out what had made the noise. Maybe I had broken something on the disc wheel? Unable to figure out where the noise had come from, I carried on and things were going pretty smoothly (except for the odd noise still coming from the back end of my bike.) By the half-way point of the course (6.5km) I had caught my 2 minute man and was onto the smoother part of the course that I knew would suit me best. 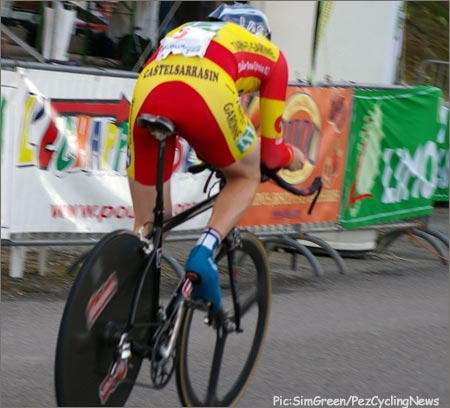 2k To Go
With 2km to go, my chain slipped on a slight uphill rise. I tried to pedal it back on, and when that didn’t work I tried to put it back on with my hand. By this point I had lost all momentum and was forced to stop, get off the bike and wrestle the chain back on. I got back on and sprinted like a mad man towards the top of the hill where my lead motorbike was stopped, looking behind him wondering what the hell I was up to. By this time I was absolutely FUMING. I gave everything I had over the final 2km right up to the line, and came in with provisional 3rd best time. However by the end of the day I had dropped down to 7th.

The Rainbow jersey went to a very fit looking Frederick Backelandt from Belgium, with Germany’s Martin Boekelmann in 2nd and Britain’s Robin Coomber in 3rd. Congratulations to them as they put in some stellar times over such a course. Now about the loud crack: I somehow managed to crack the Ti rail on my San Marco Era seat. Please don’t ask me how, because I have absolutely no idea, it’s not as if I’m overweight, but there you go, “shit happens” as they say. 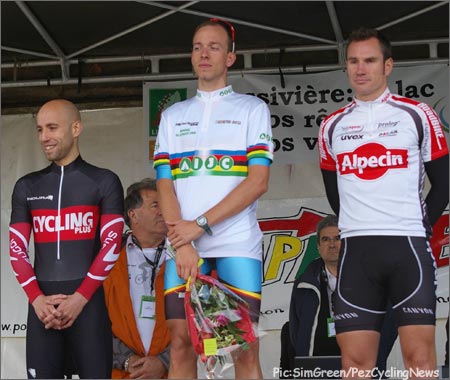 The Chrono World Champs of Journalism… a Belgian, a German, and a Brit. Check out the podium girl in her PEZ felpe… nice.

What’s Cool in Journo Worlds
As frustrated as I was with my ride, it was all pretty darn cool! The event had a real big World Championships feel to it. The course was cool, the scenery around the Lac de Vassiviere was perfect, the finishing arena was grandiose, and the whole thing was run under the watchful eye of Tour de France legend Raymond Poulidor. What else could you ask for? [PEZ: err… a podium spot maybe…?] 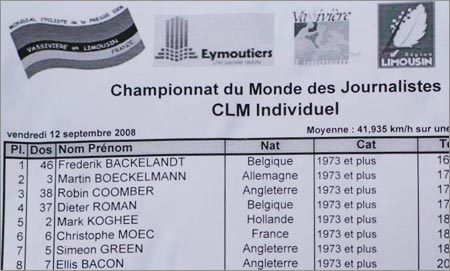 Okay… we were hoping for a win, but seventh place with a broken seat AND a dropped chain… that’s not bad.

Next year’s World Journo Champs are in Slovenia, so by next year I’ll have a new (non-broken) seat and a chain that stays on the chainrings in order to better represent the Pez-Presents at Journo Worlds… either that or I’ll sharpen my pencil and see who can write the most over a 12k circuit.

But next up is the Road Race – tune in later this week for the full report.

TREK PROJECT ONE TAKES OFF