PEZ-Man Simeon Green competed in the 2008 World Championships for Journalists last weekend in France. After a 7th place in the TT, he was fired up for gold in the road race… here’s how it unfolded…

Predictions
The weather forecast over the past week had been for a dry and sunny Time Trial, and a wet Road race. So as I awoke on the morning of the Road Race, I was happy to find zero rain and some dry roads. It was an early start to the World Championship Road race, with an 8:45am rider call up. It turns out that just as we started the race, the heavens opened up and it rained harder than I have seen in a very long time! Pretty ironic after my morning delight of dry roads. 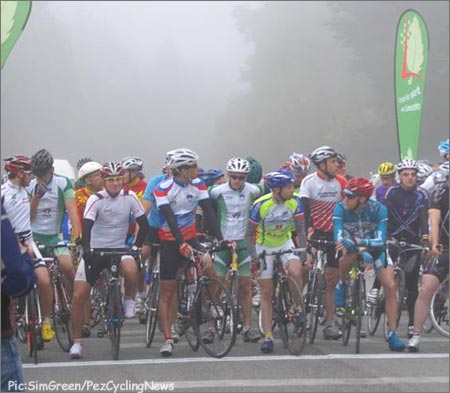 It was unseasonably cold for this time of year in this part of the world already, add the rain, and then some horrifically thick mist and we got one heck of an epic day for a World Championship (much to the Belgians’ delight I’m sure). Of course the rain pretty much stopped as soon as we got off the bikes, but what can you say, “C’est la vie!”

The Road Race
I was feeling pretty excited about this race. I was disappointed in my TT performance from the day before, but this was a chance to get back out there and mix it up. It turned out to be a bit of a strange race. There were only two other guys from France on the start line, David Malle who finished 4th in the Road Race back in 2004 and myself for PEZ. 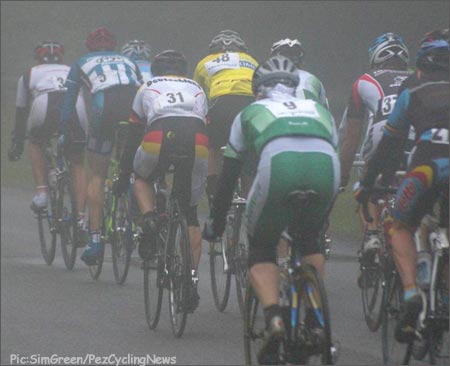 Seeing as we were all from different press agencies, we figured us Frenchies would try and work together somewhat in order to combat the National teams of Belgium and Slovenia.

Some of the riders on the course were only doing two laps while we were doing three. It all got a bit confusing after a while as we tried to get out of their way at the end of the second lap to let them fight out their own race. What that actually meant was that we ended up having a very slow second lap full of very negative racing. No one was let to get away and no one wanted to hinder the development of the race for those only doing 2 laps.

With the loss of pace, the freezing weather, the mist and rain, we ended up feeling like ice blocks on bikes. I couldn’t feel my hands anymore and wasn’t sure when I was breaking or shifting. Once the other guys had finished their race on the 2nd lap, it took our group a while to get moving again. 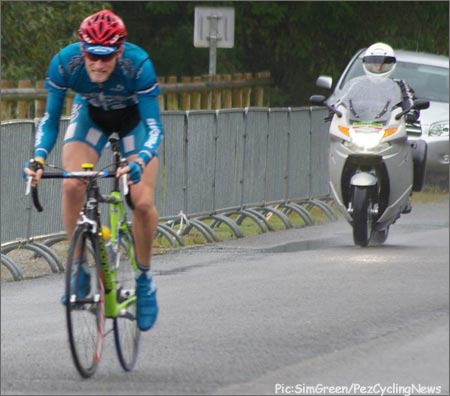 In the end I ended up attacking to get things moving again. I did this partly because I knew I’d be able to take everyone by surprise, but mainly, I must admit, in a desperate effort to try and keep warm. It looked like it was going to work for a while as there was some hesitation from the main group. 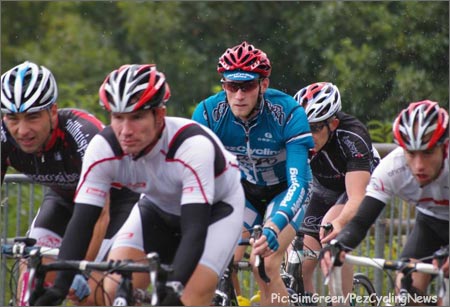 My fellow French riders did their best to hold things up, but in the end the Belgians brought me back. A few other attacks and counter attacks ensued, but in the end it was clear no one was going to get away. Most frustrating was the fact that although no one could get away, unless someone was attacking, the pace was pretty slow. Too slow in fact. If it had been a fast and/or a hillier race, I think a few of us would have felt a lot better, and things might have started to fire.

The Finale
We ended up in a group of 8 heading into the finale. As things got a little more heated as the finish line approached, a few guys got spat out the back, leaving a group of 6 or 7 of us heading towards the finish. In the group was one Englishman, one German, one Dutch rider, two Belgians, and myself. With 2km to go it was clear this Road Race was (sadly for me) doomed to finish in a sprint, and there was nothing I could do about it.

As we past under the Flame Rouge marking the final KM, Frederick Backerlandt of Belgium (yesterday’s TT winner) was on the front, with a very nervous Martin Boekelmann of Germany on his wheel. I much prefer hilly races and am a shocking sprinter. 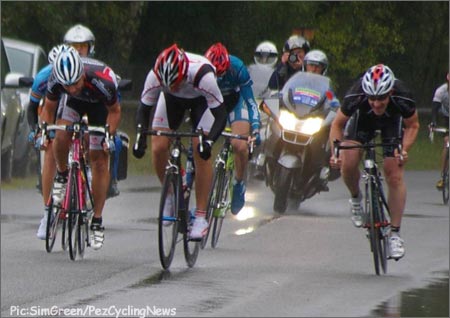 I knew my only chance would be to go early and try to surprise everyone (which has worked in the past), so as we came around the final corner with about 800m to go, I launched on the left side of the road. As we got closer to the line I could feel a Belgian was just on my left side. As the line got closer still, I realized I definitely wasn’t going to win, but I thought I might hold on for a podium finish… 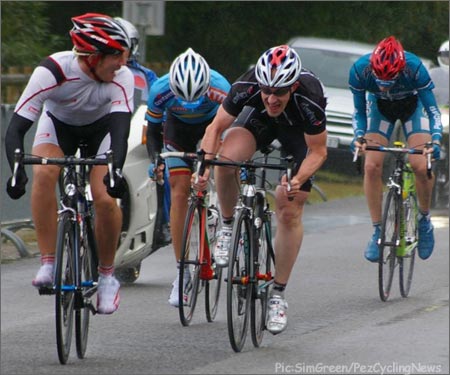 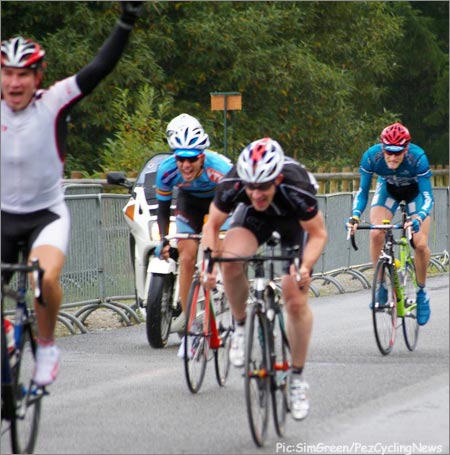 Then 4 riders swarmed past me and it was all over faster than you can say Djamolidine Abdoujaparov. The nervous German Martin Boekelmann won the sprint in fine style ahead of Belgian Dieter Roman. Yesterday’s TT world Champ (who was the strongest looking guy on the road in my opinion, but maybe a bit skinny for a sprint finish) took 4th, with your’s truly, fully decked out from head to toe in cooler than cool (freezing in fact) PezCycling kit by Capoforma in 5th.

Dreams of a production version of a PezCycling Rainbow jersey will have to wait until next I’m afraid.

An army marches on its stomach…
Although the racing was finished, there was still more to come. First of all, in light of the cold weather, one of the Podium girls for the event ended up wearing a very cool looking Pez Felpe on the podium! 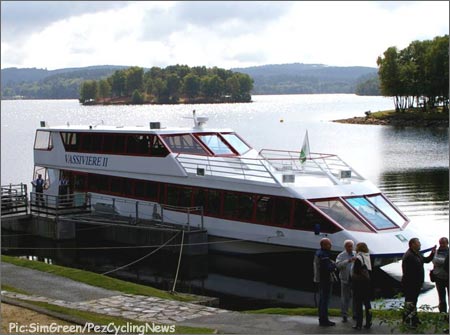 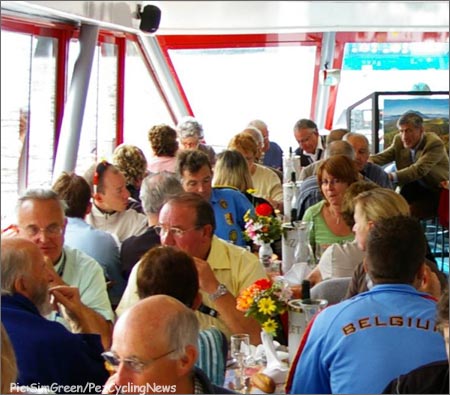 Second of all, after the event ceremony we were all invited to a lunch put on by the organizers on a boat-restaurant around the Lac de Vassiviere. 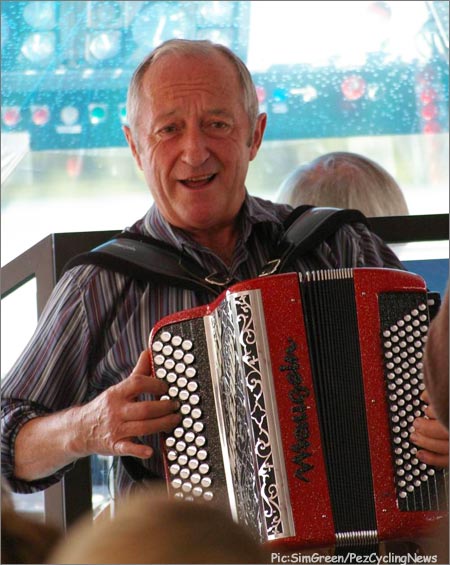 So for two hours, as we chugged around the lake sipping wine and enjoying a sadistic late ray of sunshine, we tucked into what the French do best… a great meal! 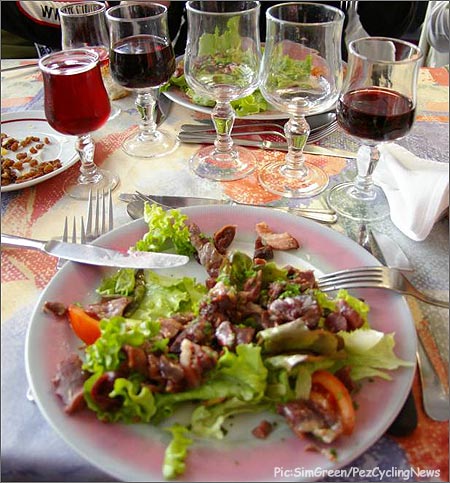 And what better note to end this cooler than cool (literally considering today’s weather) first ever Journalist World Cycling Championships for PezCycling than on a full stomach?! 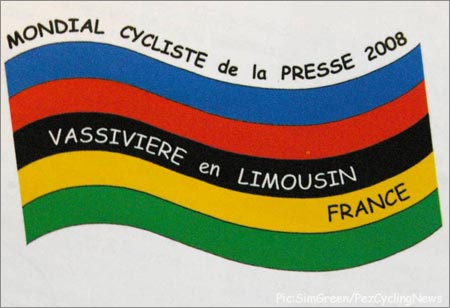 Until Next year in Slovenia… FOR THE PEZ-REVENGE!

TREK PROJECT ONE TAKES OFF