Julio Jiménez, ‘The Watchmaker of Ávila’, Dies at 87

Rider Obituary: The Spanish rider, Julio Jiménez, was three times king of the mountains and second overall in the 1967 Tour, a close friend of Jacques Anquetil and initiator of the great Ávila cycling school, died on Wednesday morning in the Nuestra Señora de Sonsoles de Ávila hospital due injuries he suffered in a traffic accident. Two other octogenarians were also injured in the accident, when their vehicle hit a wall. 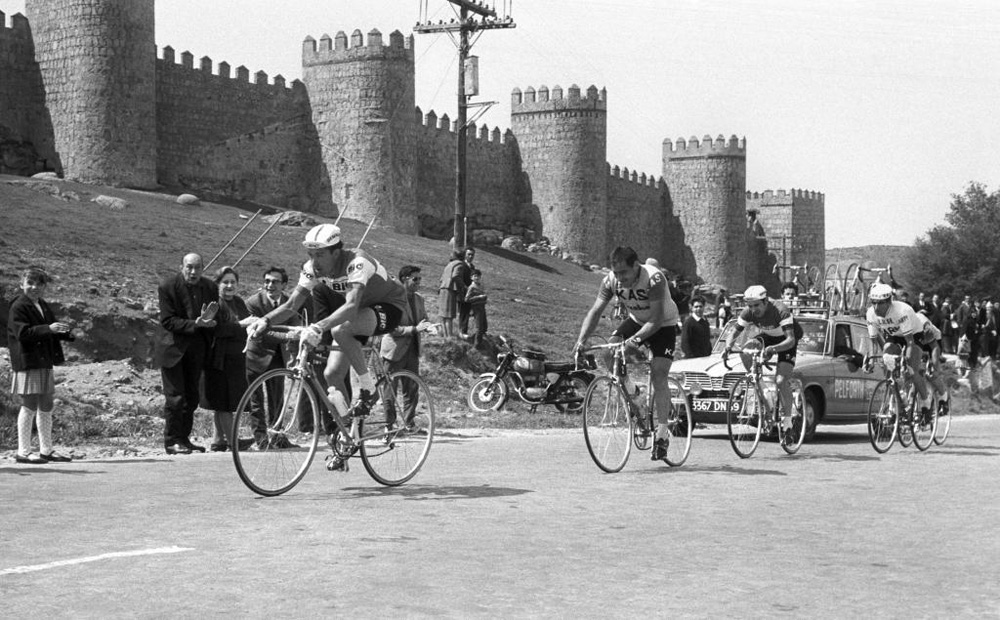 Julio Jiménez keeps looking, his eyes alive, mischievous and strangely innocent at the same time, the reflection of his life, and his memory, which is already beginning to enter the misty terrain where it could begin to be confused with fable. But no, it is still sharp, precise, with contours as clear as the certain unconsciousness that guided his years as a cyclist, optimism. Like the charm that made him a cyclist, a person, whom we all loved and whom we cry today when we find out that he has died as a victim of a car accident at the gates of his friend Ángel Arroyo’s large car wash in Ávila, a cyclist due to him, and a great cyclist like him, and also second in a Tour and first on the Puy de Dôme. And Chava Jiménez, the climber who died young, became a cyclists through Arroyo, Carlos Sastre, who did win the Tour, Lastras, Mancebo, Navas… 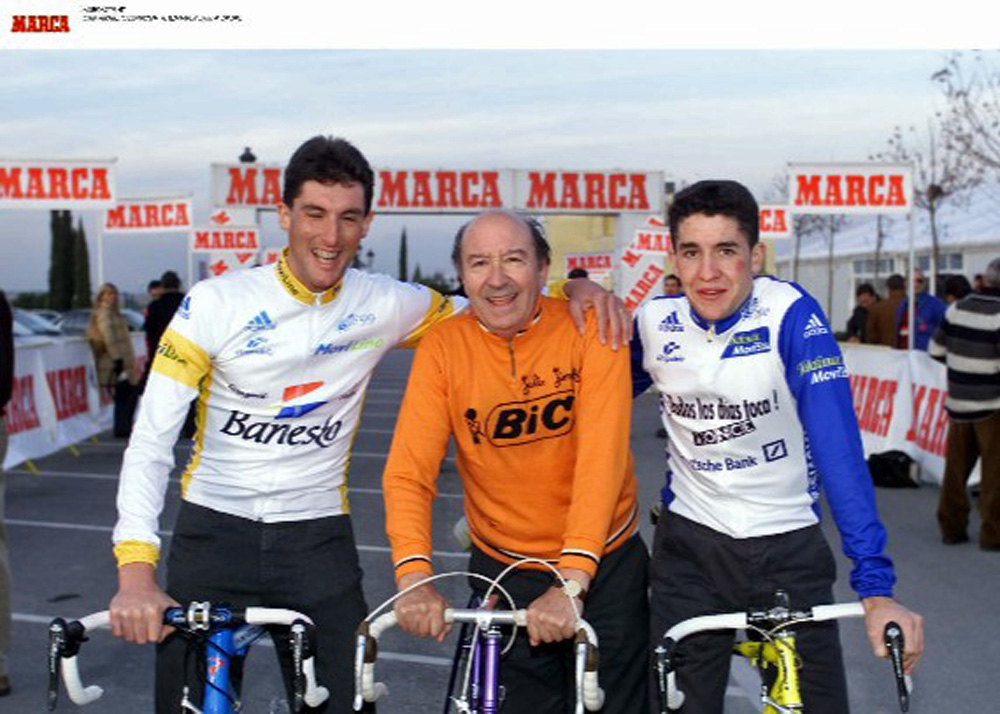 Then he spent the day sorting through souvenirs, photographs, cups from his time, jerseys, shirts, his trophies. He lived among them, and daily answered several letters from fans who asked for autographs and dedicated photographs, and who sent him magazines and books, and he only missed the pink jersey that he wore for several days of the 1966 Giro, and a bicycle, and other things that he had lent Luis Berlanga for props for his film Paris-Timbuktu, and that he never got back. And he had a sorrow in his soul for that. He was a man attached to his memory, so full, to the objects that woke it up, the chamois goats heads that were awarded to him as the best climber in the Alp stages of his Tours, the Galibier, the Télégraphe, Granier, Sestriere. And, always, ahead, the shadow of Bahamontes, who, yes, had won the Tour, and his envy and jealousy for the brashness of the young man who was also three times king of the mountain, the favourite throne of the Eagle of Toledo, 93 years, and he goes on. And the rally races with his BMW through Gredos, and the day a kid from near Tiemblo appeared among them and ridiculed them all, and so Julio told it, always an admirer of the great talent of all the others, never envious. “And Carlitos Sainz (famous Spanish rally driver) spent one day with the Gredos group with his little gang, and he left us speechless…” 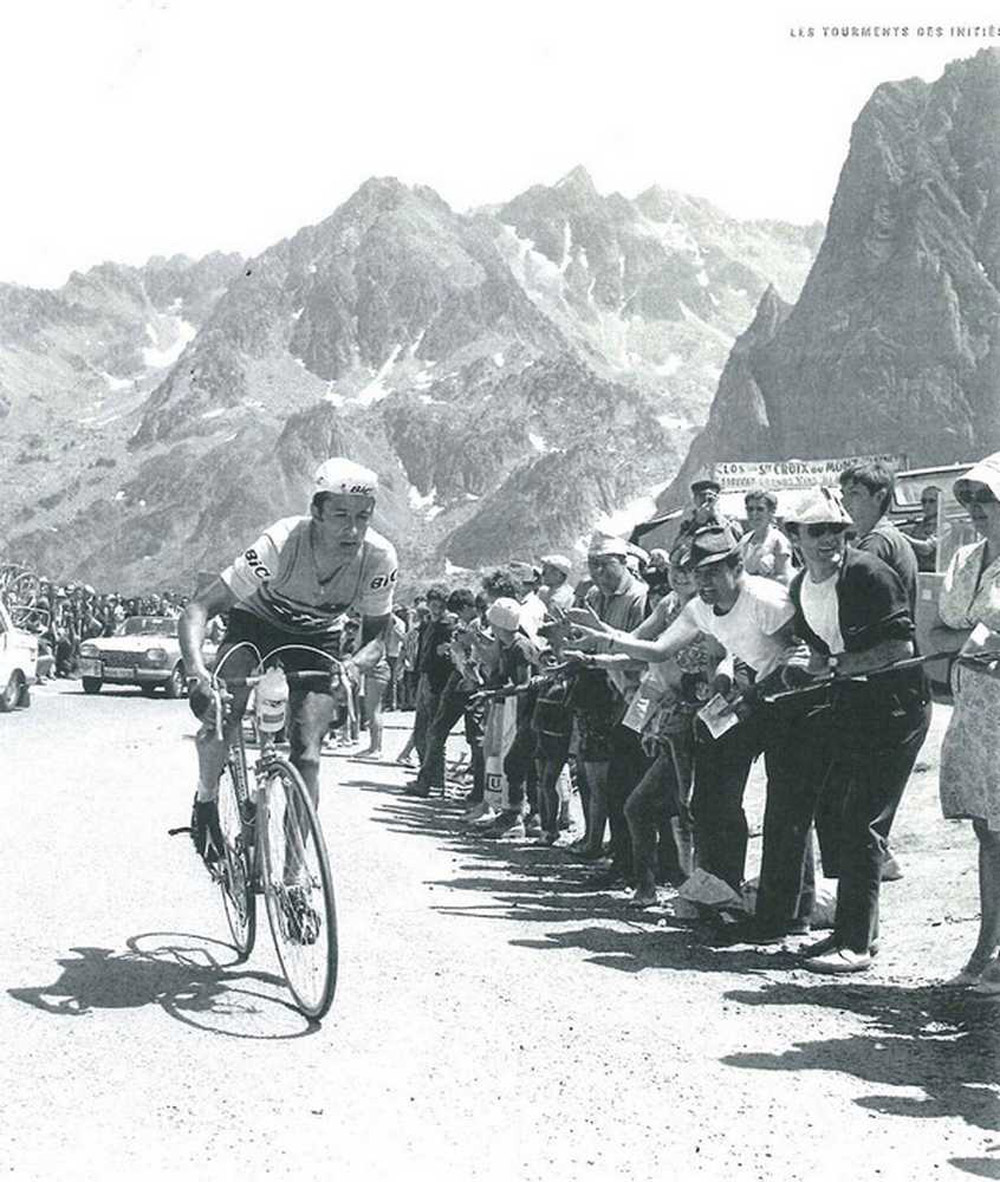 A few months ago, Julio Jiménez, a cyclist, was known by fans in the Spain of the 1960s as The ‘Watchmaker of Ávila’, because, before becoming a friend and rival on the Tour, of Anquetil, of Simpson, of Poulidor, of Federico, before winning on the Puy de Dôme, on Mont Ventoux, had worked for a few years as an apprentice, and then journeyman, in a cousin’s watch shop in Ávila. In the workshop, to anticipate the joy and freedom of his bike trips to Villacastín, he tirelessly moved his legs, rhythmically, as if peddling, up and down, under the table. It was his first conscious training. Then he worked as an electrician in some army workshops in the neighbourhood, some large warehouses in which the women pedalled the sewing machines hard and fast to make uniforms for the soldiers, and he winks a mischievous eye when he tells it, and betrays his soul of a lifelong bachelor, of an unrepentant womaniser, there, in the workshop, the only moments of joy were when he had to grease the pedals of the machines, and he allowed himself to take a look at the ankles of the women, and that it already excited him. A cyclist of whom one could say that he was always there, in the most memorable moments of the Tour in the 60s, but of whom not many people had heard, with whom it is understood that old age is not always abandonment and that women are always the spice of life. Julito was a womaniser who never married because, he says, his mother, Goya, with whom he lived until she died at the age of 90, she would never have approved of the women he liked to spend nights with. 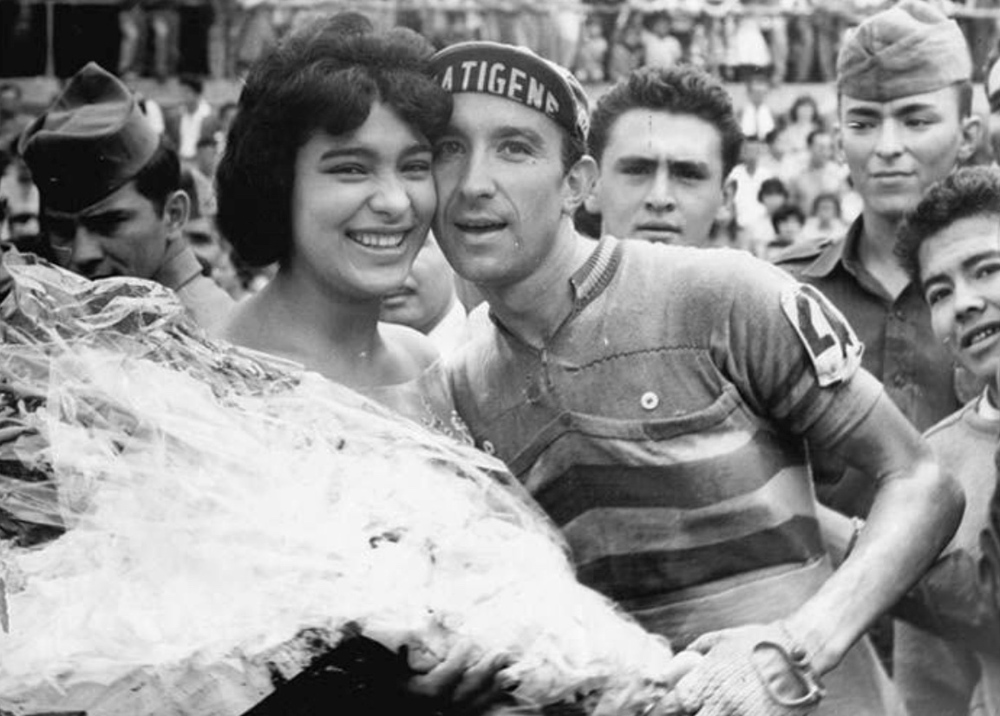 A win for Jiménez and the Catigene team

“The beginning was with a team from Madrid with Rogelio Hernández, a team called the Guardia de Franco, a dark blue jersey with an eagle. And a certain Crespo, who was from the Youth Front, managed us. The Vuelta a Andalucía, the Bicicleta Eibarresa. He made a phone call to the organisers and made some orders. A car for the wheels of the boys. Luis Pinel was with us, one who acted as director, a boy who was a ‘practicante’ and gave injections. We went to a Vuelta a Andalucía, and we almost won it with Antonio Jiménez Pareja, who lived in Puente de Vallecas and made jerseys with a knitting machine. All were against us and they couldn’t take the jersey away from us…” said Julito, because Julio Jiménez, so loved, was always Julito. “This is how we started to do our little things. And a Vuelta al Sureste, which left Murcia and ended at the Retiro de Madrid. I have a photo from that day with Bernardo Ruiz, who won that race and retired. And the following year he was director. The same thing happened to me with Miguel Poblet, who won a Volta and retired. We had no team and the organisers took us separately. With the sponsorship form the Catigene company, and with the publicity we grew. And for 1962 I chose, and I was wrong in thinking that it was more international, Faema. I debuted in the ’64 Tour, at the age of 29, turning 30 in October. I lost my best years. I would have more force to attack, although I would lack reserves for the stages of more than 300 kilometres that there were then. The team in which I felt most comfortable was Bic. If I go there two years before, they would have made me the best. It was the Bic of Anquetil, of Geminiani…” 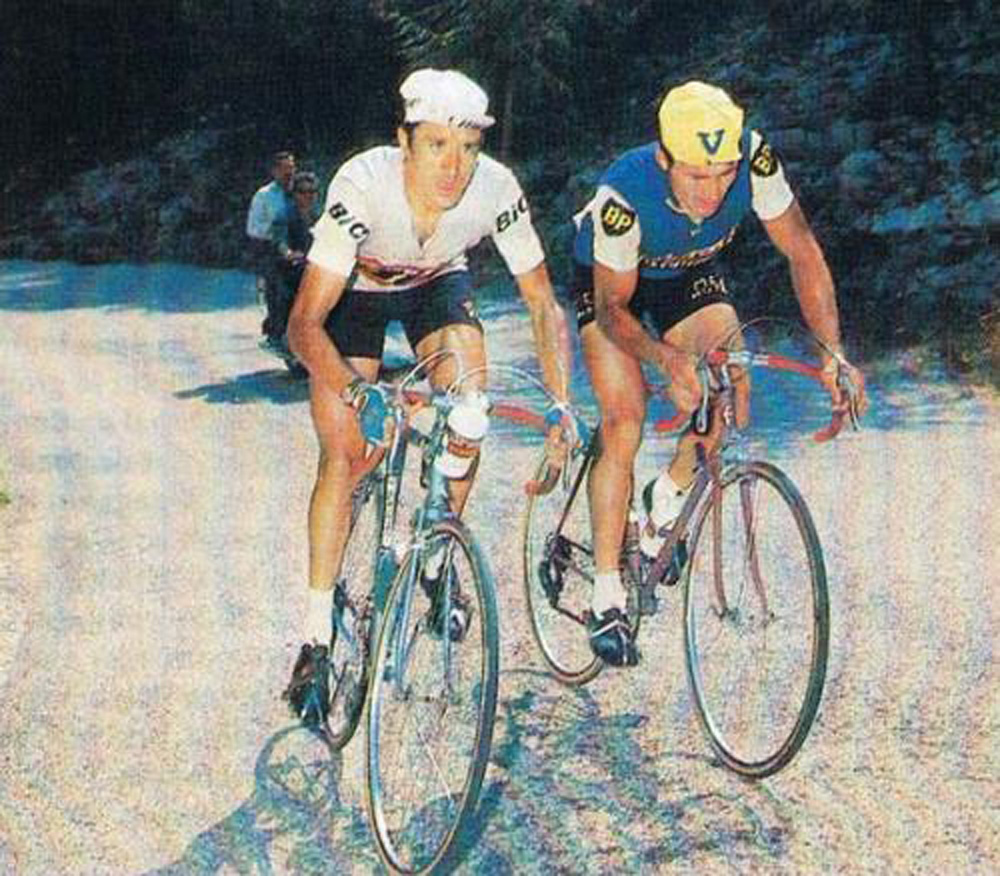 Cycling in the 1960s, before Merckx, was just the Tour and it was Anquetil, and the decade can be summed up in two great stories, that of the great Anquetil-Poulidor duel in the 1964 Tour, Anquetil’s yellow panic on the descent of the Envalira from Andorra, the hand-to-hand battle of the two French idols on the Puy de Dôme volcano, and the death of Tom Simpson on the Ventoux in 1967. And in both stories, Julio Jiménez, actor and witness, was there. He won the stage of the Envalira from Anquetil; he won the Puy de Dôme stage, ahead of Bahamontes, and took the bonus that would have given Poulidor the yellow jersey that he never wore. And before he collapsed and died there, on the hot asphalt of the Ventoux, next to the devastating moon-scape, Tom Simpson, Julio Jiménez had passed by on his way to second overall and the KOM. 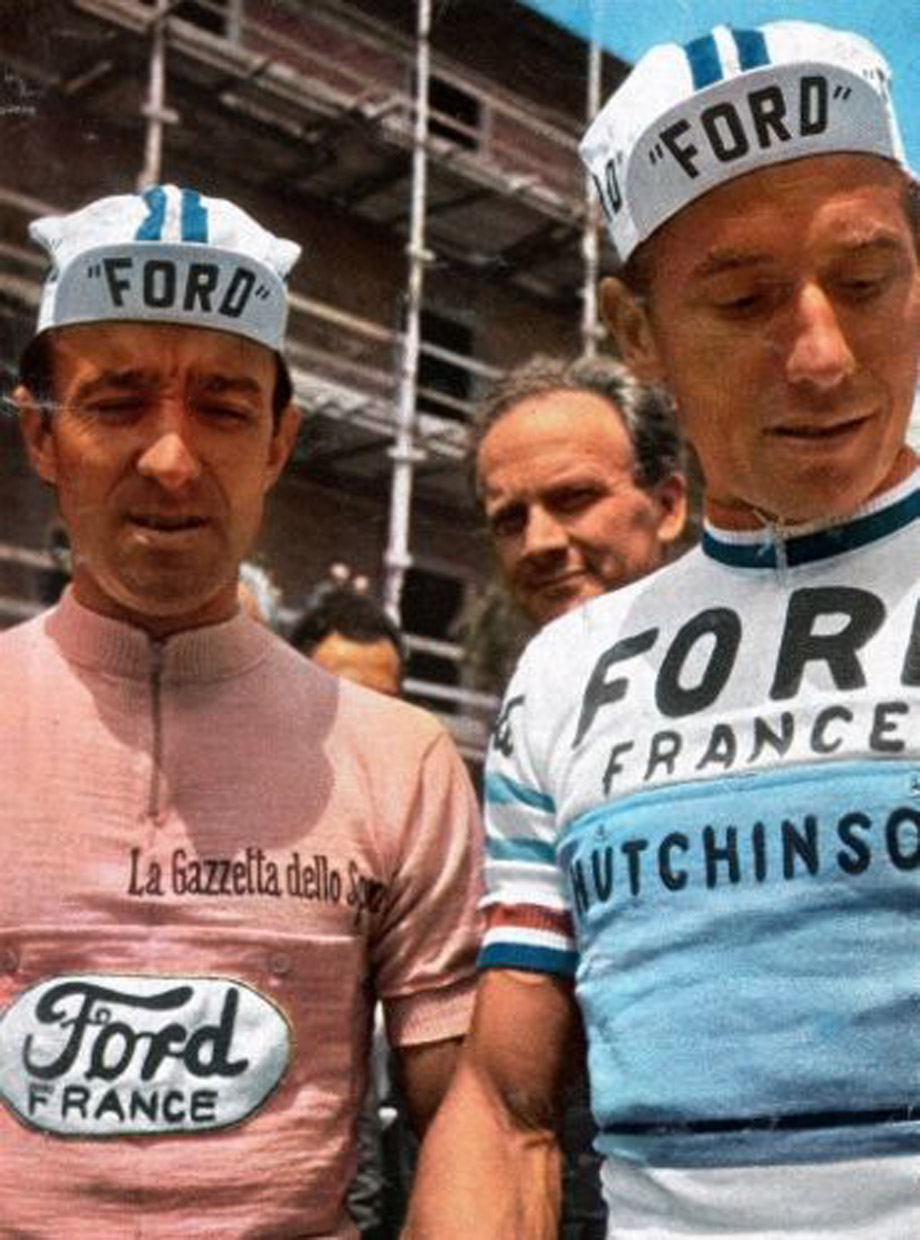 But more than women, than his mother, than the bicycle, Julito loved Jacques Anquetil, who taught him how to live. “From the start we hit it off, especially since Janine, his wife, liked me very much. She booked the hotel and I always went with them. She ordered lunches, dinners. That was in ’67 and ’68. With Bic I would have won the ’67 Tour for sure, which I had to ride with the Spanish team, a chaos of selfish people,” said Julito. “No way would they have let Pingeon take seven minutes… The French press attacked Geminiani a lot because he sometimes made Aimar ride to help me. He was riding for France B, and he saw Saura, the Spanish coach, and told him that he had to jump, that Pingeon was going. And the Frenchman who won the Tour helped him like crazy Ginés García, from Murcia. He attacked to death, and then we caught him half dead, and, I mean, hell, you make a getaway and then stay away. And Manzaneque also did the shit to me… If Fernando waits for me in the Pyrenees, in Luchon, we’ll take the jersey from Pingeon. In the meeting the night before we agreed that Fernando would go early and since he had lost half an hour the French would leave him without any problems. And since he was a horse that pulls, he began to take time and more time, virtual jersey, from the stage, and when Serra passes by and tells him that Julio is coming alone, I had attacked at the second pass, and we agreed that Manzaneque would wait for me for the last 50-60 kilometres, he said: ‘Damn it, I’m going to win the stage…’ We got along well… There wasn’t envy, each one was going to do their own thing to look good and be the hero of his people and earn his wage. That’s what I saw. I didn’t get along badly with anyone, but no one lent me a hand. If Fernando, that day, waited for me, on the flat before the Portilhon, with the French team riding to the death behind, I get more, and even so I get three minutes and arrive at the Puy de Dôme two minutes late alone. The one who helped me the most was Gimondi, more than the Spanish.” 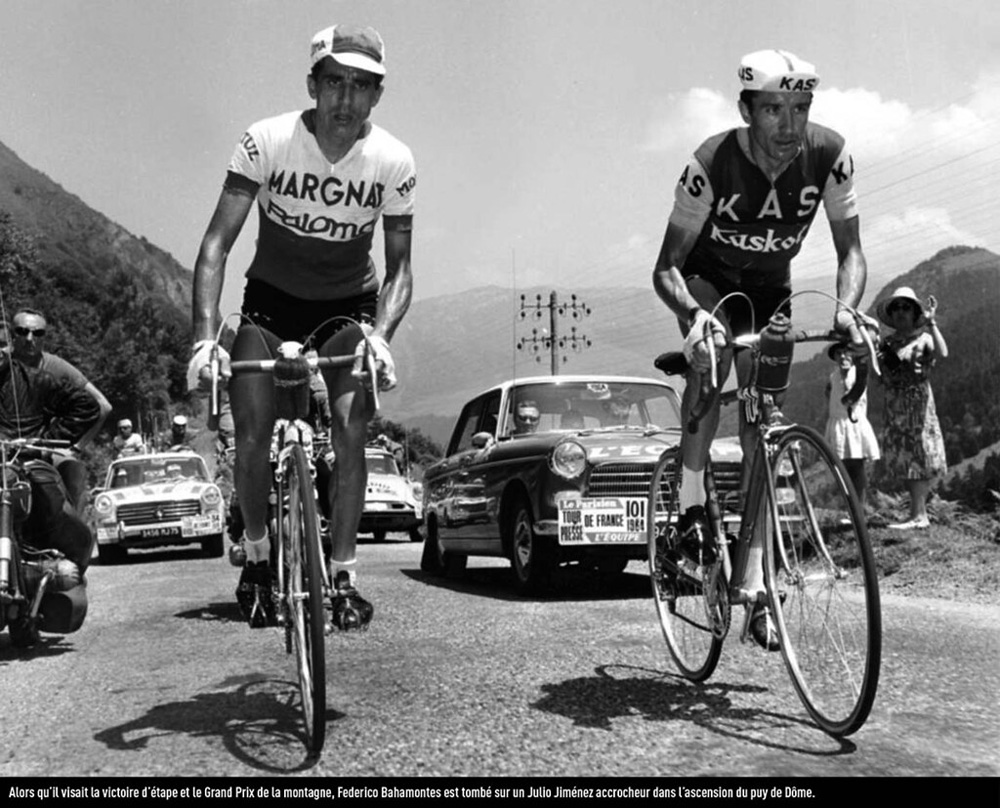 Anquetil, Jeanine, and Annie, Janine’s daughter with her first husband, made the triangle of the critérium, oysters and champagne, and Julio with the three discovers in France the freedom that in Spain is denied to everyone, the joy, the sex. “I only went down to Spain when I had been unemployed for a month in a row. As Geminiani’s team was later Ford, I bought a Ford, because I had a 1,500. They gave me a discount. It was a big Taunus, the 20, with six cylinders. I wanted the Mustang, like Anquetil, but Geminiani told me no, that in the Mustang you were very uncomfortable, on the ground. And in the criterium Anquetil was in the Mustang and I was taking Annie with me in the Ford, the stepdaughter. I did a lot of that,” recalled Julito in one of the last conversations. “Then we became Bic and I sold the Taunus and bought a BMW in Clermont Ferrand. It was my turn to enjoy, because we beat each other up to 800 kilometres a day. And there were no motorways…” 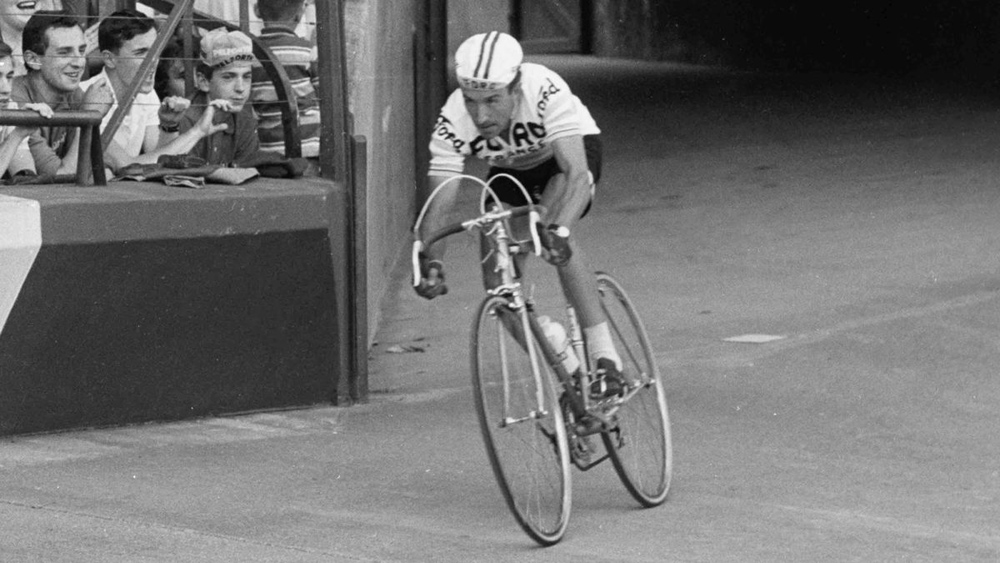 Away from the highways, when leaving to wash the car, in an oversight of the driver, Julio Jiménez, his heart a little tired, his spirit always cheerful, died one hot night in Ávila, as Tour time is approaching. 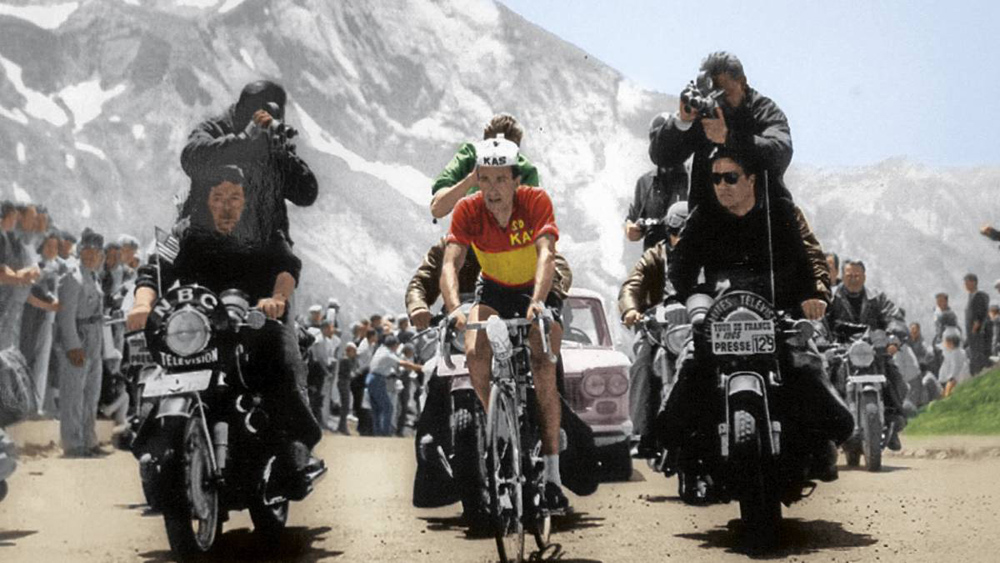 Julio Jiménez – Flying in the mountains

# With thanks to Carlos Arribas and EL PAÍS and all the photographers. #