No rest for the weary soul of Mr. Ed Hood on Sunday. Saturday was jam-packed with a titanic clash between the cobbled greats, and happily, there was much of the same on Sunday for Kuurne-Brussel-Kuurne. Ed takes us inside another wild day in Flanders.

The Deinze Road out of Gent and ‘Au Cindy,’ one of the many establishments which cater for ‘gentlemen’s needs,’ is shut, no scantily clad cutey graces the chair in the shop window – it’s Sunday morning, after all. 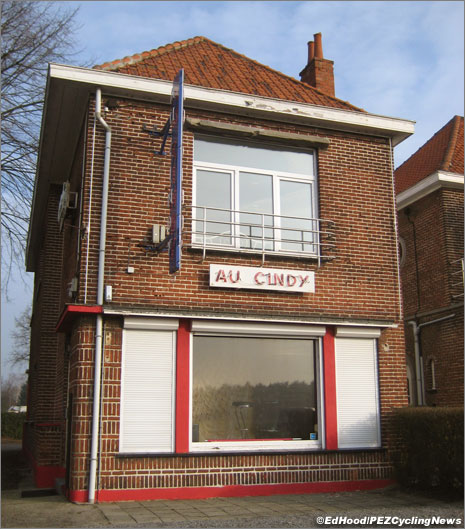 Everybody needs a rest at some point, right?

But a few doors along, Fietsen Godefroot is open to cater for the fans who are in town for Gent-Gent and Kuurne. 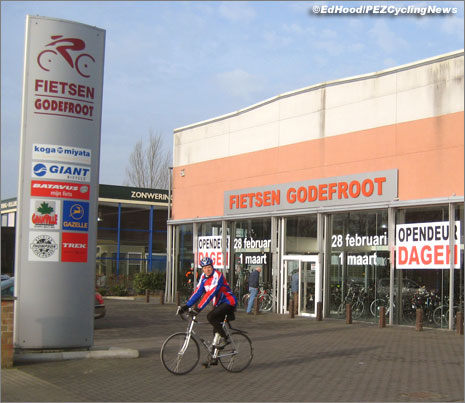 Walter Godefroot was the “Bulldog of Flanders” a man who pummelled his way to victory in Paris-Roubaix, then later tried to keep Jan Ulrich off the Black Forest gateaus at Telekom – he had more success on the cobbles. His son runs the shop now, Walter has seen enough of bikes over the last half century.

It’s mild, and a watery sun is trying hard as we head for Kuurne. Kuurne-Brussels-Kuurne is the ‘consolation race’ for Gent-Gent. It’s not as tough or prestigious as it’s Saturday twin, but it’s a big race and victory in it can make amends for a disastrous Saturday – like the one that Lotto and Quickstep had yesterday.

Kuurne is ten kilometres shorter at 193 K and ‘only’ has eight climbs as opposed to the earlier race’s 11. It’s a lower key affair than Gent-Gent with the start on an ordinary street in Kuurne. 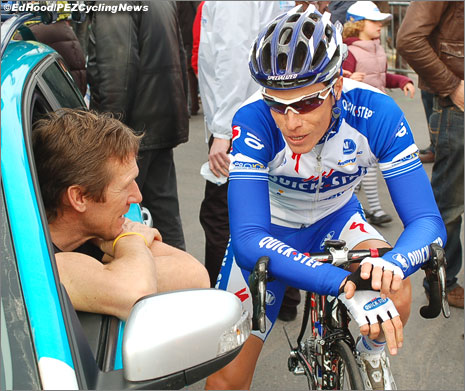 The smaller teams – and the French squads – set up at the local sports centre where the public can roam freely among the team vehicles and riders. The top squads are in a car park with police control on the gates. 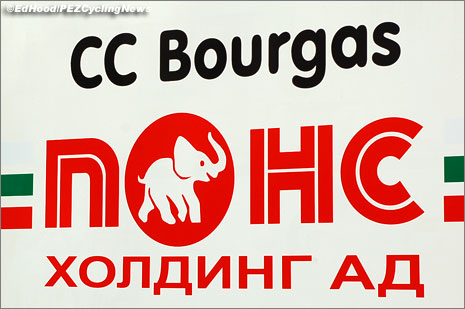 Kuurne gives the smaller squads a chance to mix it with the big boys, the likes of Bulgarian CC Bourgas, Revor-Jartazi and AN Post are riding. The Irish squad’s manager, Kurt Bogaerts, took a minute to talk to us about their top man, ex-Belgian champion and Flanders legend, Nico Eeckhout. Nico is in the autumn of his career but is still very popular with the fans. “Nico was going very well at the team’s training camp but caught flu and hasn’t been well, every day he improves, though. Today we just have to see how it goes, there are some very big teams here.” 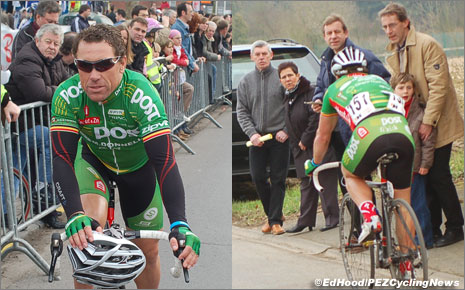 We take the short cut through the cemetery to the main compound where there are no old guys on sit up and beg bikes asking the mechanics how many cogs are at the back.

The last time we spoke to Bart Leysens, he was head mechanic at Lotto, now he’s DS at Katyusha; “Before I was just responsible for the bikes but now I have to worry about hotels, flights, tactics… It’s important that a new team wins quickly, to build confidence – Robbie McEwen, Danilo Napolitano, Gert Steegmans and Toni Colom have all won for us already, so I’m happy with that. Pozzato crashed yesterday in the finalй. I’m not saying he would have won, but I think he had a good chance – that’s racing, though!” 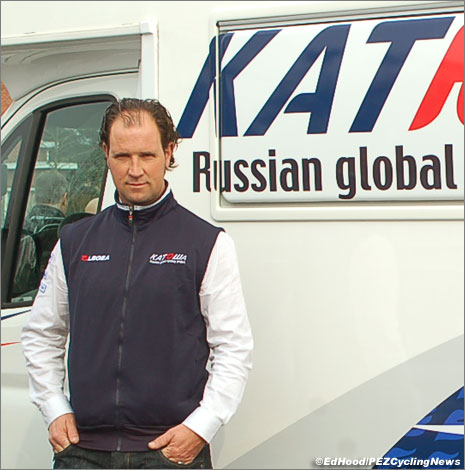 His management colleague on the Russian squad, Andre Tchmil meanwhile, was explaining to a journalist why him and Oleg Tinkov no longer exchange Christmas cards. 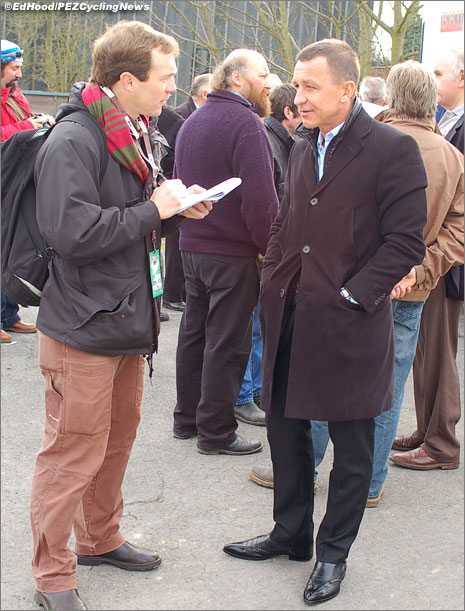 And there was former Belgian champion and main man at Lotto, Marc Sargeant; he had a few philosophical words for Pez too; “We were good yesterday, but not good enough. Rabobank were the strongest team on the day, no question – but I couldn’t understand their tactics. We had Greg van Avermaet in the finalй but he was held up in the crash – you never can say in bike racing.” 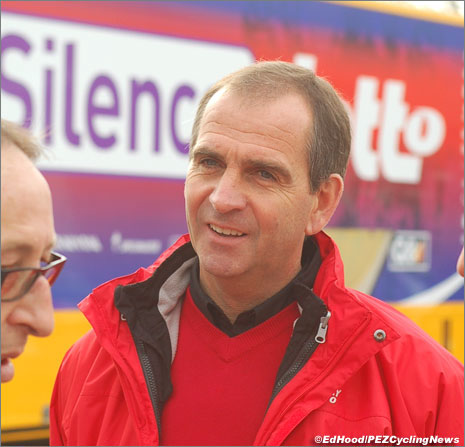 Dutchman, Thomas Dekker looks cool and is surprisingly popular with the fans and journalists, maybe it’s because he defected from Rabobank to Lotto? 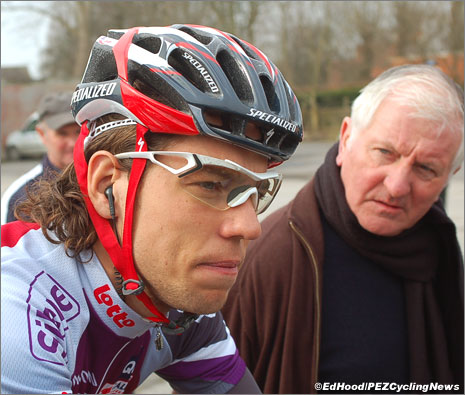 There’s ‘my boy,’ Copenhagen six winner, former world scratch and Danish elite road champion, Alex Rasmussen – his new white Saxo Bank kit looks straight out of a washing powder commercial on TV; “It’s my first big race of the year and the weather is good, so I’m looking forward to it. Matt Breschel is our protected rider, we hope for a good result from him. How does the Specialized cope with the cobbles? – I’ll find out today!” 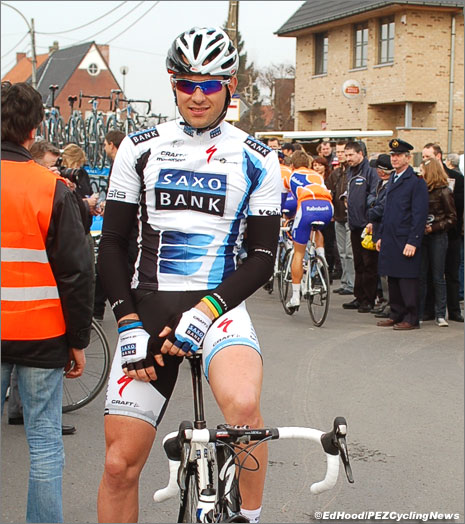 Ed’s boy, Alex Rasmussen, fresh off the track and straight into the fire.

Roll out time; the river of colour flows through the streets of Kuurne. 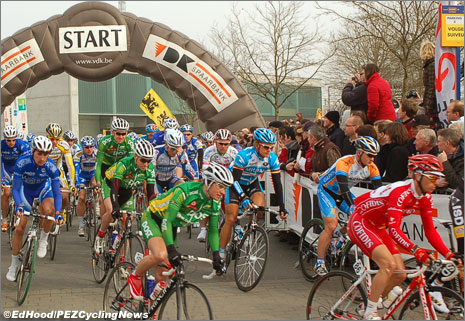 We decide that we should check out the junior race – like locals would. If you brought someone here who didn’t know too much about racing, it wouldn’t be too hard to convince them that this was a pro race. There are 150 starters, the best of hardware, police motorbikes, soigneurs, even a blackboard man – and some attractive mums! 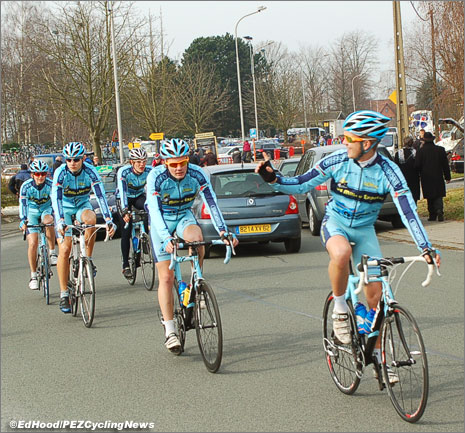 The race starts of like a track handicap, the youngsters at the back of the grid are sprinting flat out by the time they get to us – and they haven’t even crossed the start line. No wonder the Belgian pros are so good.

Kuurne’s parcours is more elongated than that of Gent-Gent; it’s hard to see it live too many times. 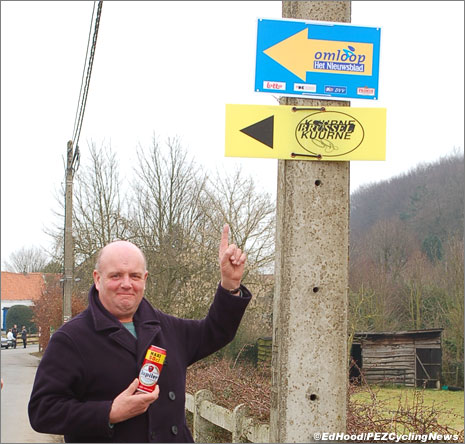 We stick to our old routine – watch it at the top of Oude (old) Kwaremont then jog over to the top of the Cфte de Trieu and catch it again. 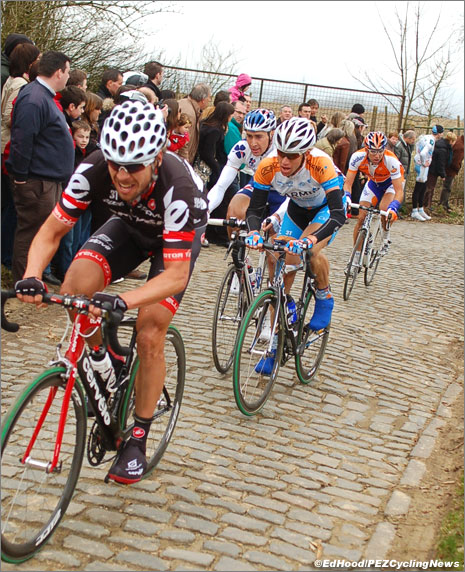 At the top of the Kwaremont the crowd is thick and expectant; but Ivanov (Katyusha & Russia) surprises us, he appears from nowhere – game on. The survivors of a break torture themselves over the cobbles. But the big guns are cutting them no slack and Boonen is close behind. 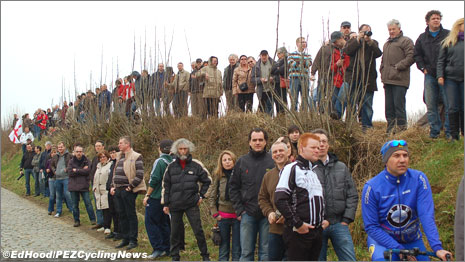 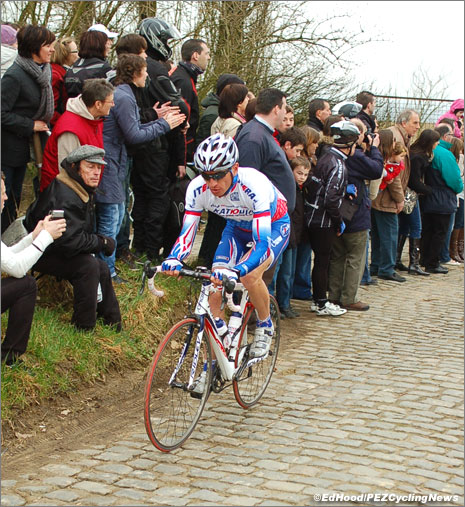 Make no mistake, Patrick Lefevre – the QuickStep boss – will have read the riot act; yet another disastrous Het Volk requires redemption – and there’s only one result which will do today. 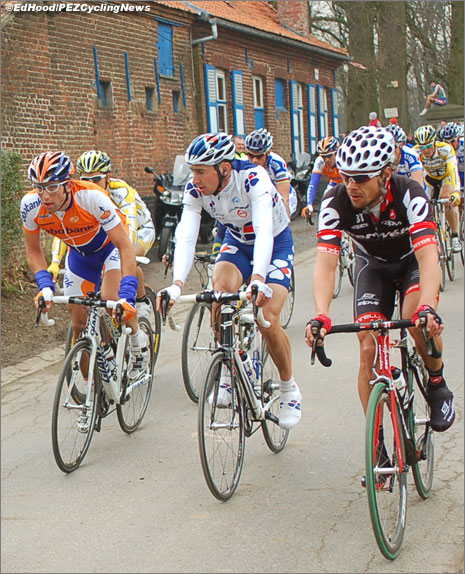 Jez Hunt keeps watch over the front of the group.

A brisk walk to the top of the Cфte it’s ‘all change’ – the race winning move has formed; Boonen is there and so are the Rabobanks. 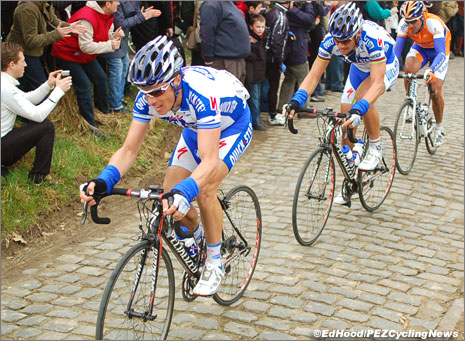 With the lack of rain and the sunshine, the roads are thick with dust; the team cars kick up plumes as they gun it after their men. 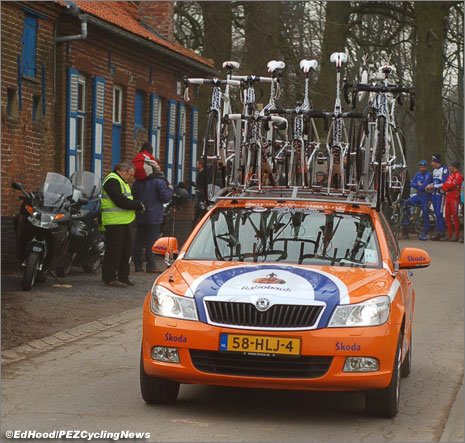 The crowd disperses, desperate for another fix of death racing.

It’s ‘bar time’ for us and the run down town of Ronse comes up trumps with Bar L’Escale – not too busy, good pils and a great view of the big screen TV – 35 K to go, perfect! 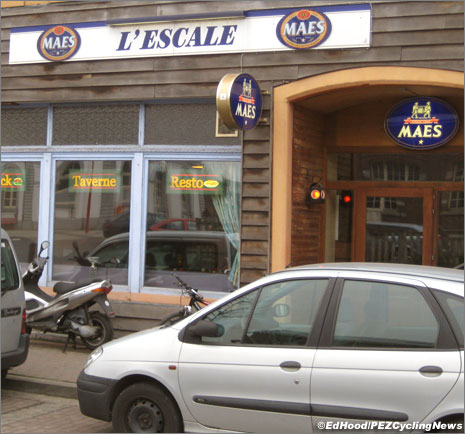 Run down or not, Ronse has cycling in it’s soul, huge bike race murals grace the gable ends of houses.

And it was here, in 1988 that Claude Criquielion and Steve Bauer clashed in the final sprint of the worlds; Bauer got a DQ, Criquielion got road rash and Maurizio Fondriest got a rainbow jersey. 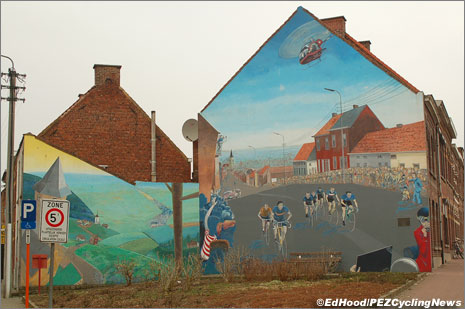 I’m not sure, but I think that there were some old guys in the corner of the bar still talking about that finish.

The poker game plays out and it’s Belgium’s favourite son who throws down the royal flush.

We get a bonus in the shape of our home boy Jeremy Hunt in third.

The TV interviewer asks Jez if he thought he could beat Boonen in a sprint; ‘if I was on my best day and he was on a bad day, maybe – but usually not!” 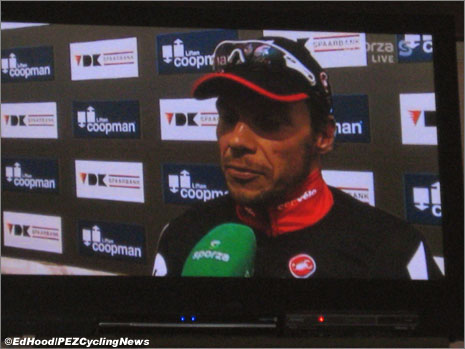 Second place Eisel has a good quote too; “I used to hate Kuurne, but now I love it!”

Time to go and leave the locals with their jail house tattoos, to their pool playing – but the barman knows why we were there and gives us a wave and a shout as we go. 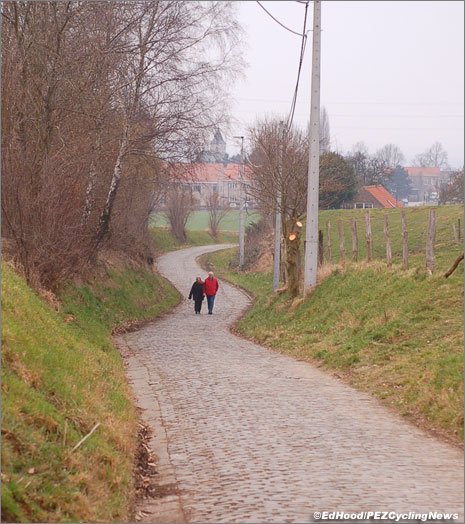 Time for a final run down the Kwaremont; there are empty beer glasses on the deserted tables outside the bars, but that’s OK – it’ll soon be time for the Ronde.