Kuurne ’15 Roadside: From The Bar!

Day two of Ed Hood’s Belgian jaunt took him to the roadside of Kuurne-Brussel-Kuurne on Sunday, via one or two of his favourite hostelries. The more relaxed start allowed a bit of bike hardware inspection, and rider mingling, but with a race to watch the call of the bar L’Escale was strong.

“Ah! Le Course!” Says our amigo at L’Escale bar in Ronse as we stumble in after our stint on the Oude Kwaremont; he prepares the TV in the store room at the back of his bar for us. But then the guys watching the soccer leave and we get promoted to the big screen in the main bar – and free nibbles. Gilbert puts in a ‘dig’ inside 10 K but our host just shakes his head; ‘no, no! It will be sprint’ he correctly asserts. 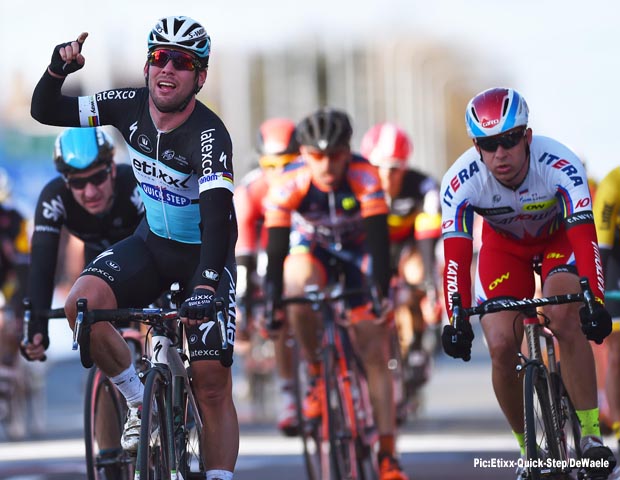 Modesty prevents me from saying who correctly predicted Cav, Kristoff, Viviani but that’s how it finished. If someone had said to us 10 years ago that the two opening Belgian semi-classics of 2015 would both be won by British riders, we’d have smiled politely and responded that such an outcome was highly unlikely. But Big Ian and Wee Mark did that very thing; Ian Stannard breaking three of Quick Step’s finest to win Het Nieuwsblad for a second time and Mark Cavendish out-sprinting a mix of some of the world’s fastest men – Kristoff, Viviani, Bouhani – to win his second Kuurne-Brussels-Kuurne.

Kuurne is the bridesmaid to Het Nieuwsblad’s princess bride. Het Nieuwsblad is the glittering prize but KBK isn’t a bad race to have on your palmarès either, you join the likes of cult riders Jaan Kirsipuu and Fred Moncassin on the role of honour as well as the Cavs and Tommekes of this world.

There’s also a certain Patrick Lefevere on the palmarès – said gentleman will be keen to see his Quick-Step boys make amends for a disastrous (and I make no apology for the hyperbole) Saturday. A win won’t heal the wound but at least it will disinfect it. Kuurne is a much lower key affair than Het Nieuwsblad; there’s none of that ‘Flanders Classics’ ViP elitist vibe going on.

The team buses line up on the main drag in Kuurne and access to men and machines is much freer than it is in Gent. First up is the mandatory examination of hardware – with heads which weren’t too fuzzy. We left the Vivaldi in time to be in bed for 2:00 am – that’s U23 drinking; one of our fellow customers apologised for his early departure by explaining that he left our fave Gent bar at 07:15 (now, that’s Elite scooping) that morning, but tonight he had to go home and get some sleep. 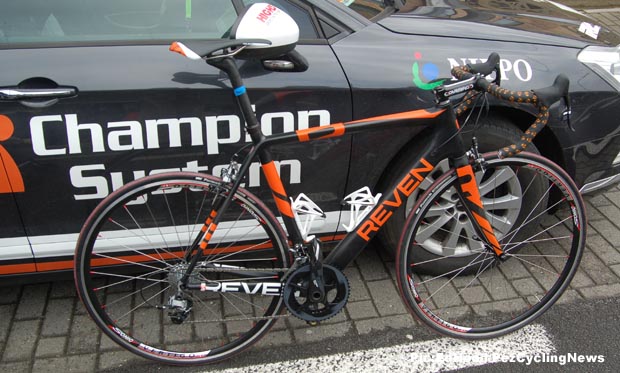 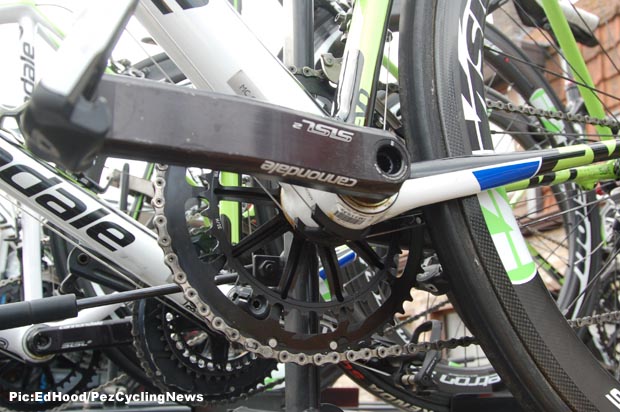 Garmin-Cannondale weren’t in evidence over this weekend but Conti team 3M were there complete with nice Cannondales; some of which were running the US company’s new super light one piece 39/53 chainring set up. Very light and very ‘retro’ – as Dave observed, it looks like something the English manufacturer Williams might have come up with in the 60’s. 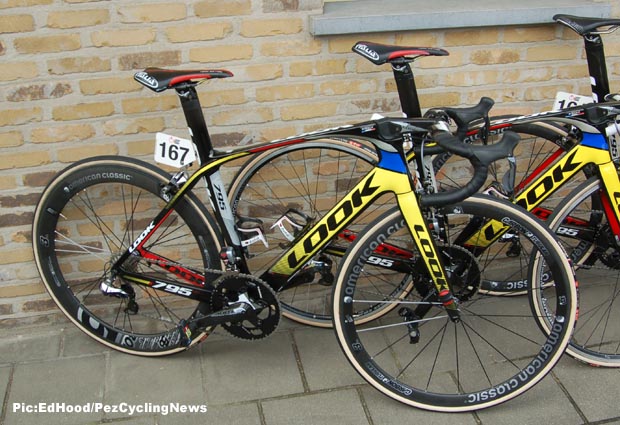 Look’s latest 795 model with the handlebar extension flowing into the head tube is another piece of design which takes a little getting used to. The concept looks good on a big bike but on a small frame… 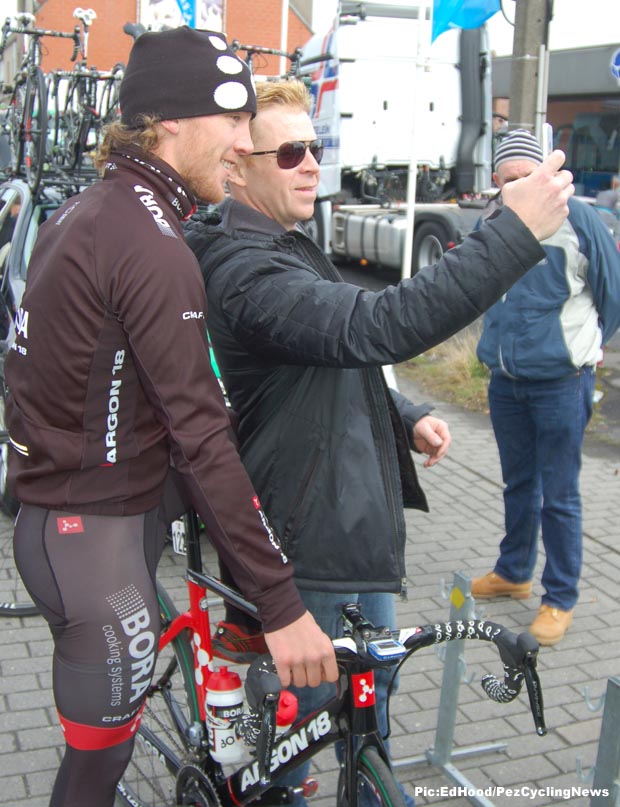 Commonwealth Games scratch race champion, Shane Archbold has moved up to Pro Continental with Bora this year but was back paying a visit to his former team, AN Post; with team manager, Kurt Bogaerts doing that ‘selfie’ thing. 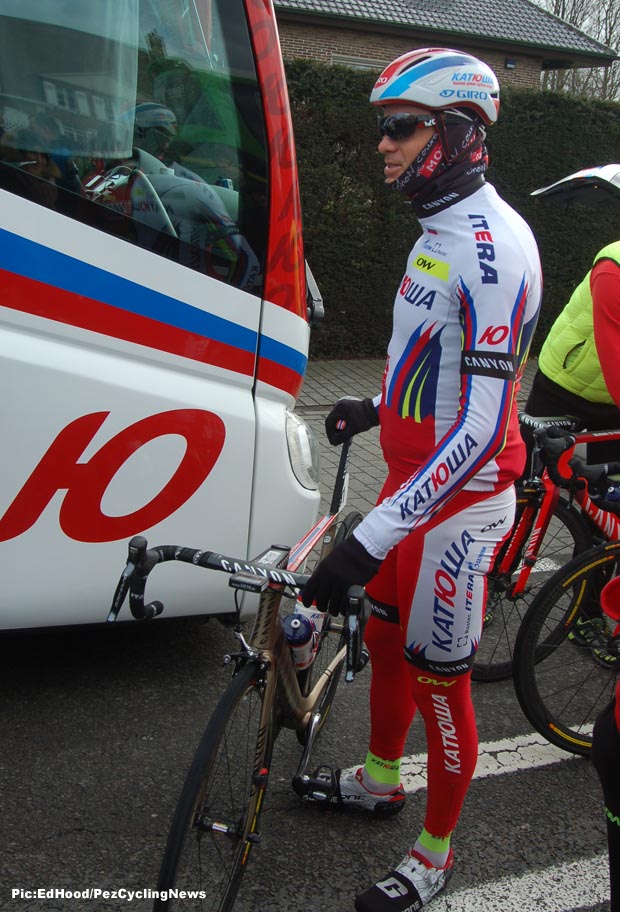 Meanwhile Alex Kristoff was taking no chances about being wrapped up warm for a day which didn’t feel as cold to us as Saturday did. And he got it right when he told the waiting journos that Cav would take a bit of beating because he was coming in fresh and hadn’t ridden Het Nieuwsblad.

The ‘flat’ aero combined extension/handlebar on his Katusha Canyon also take a bit of getting used to and as for his gold paint job, well . . . 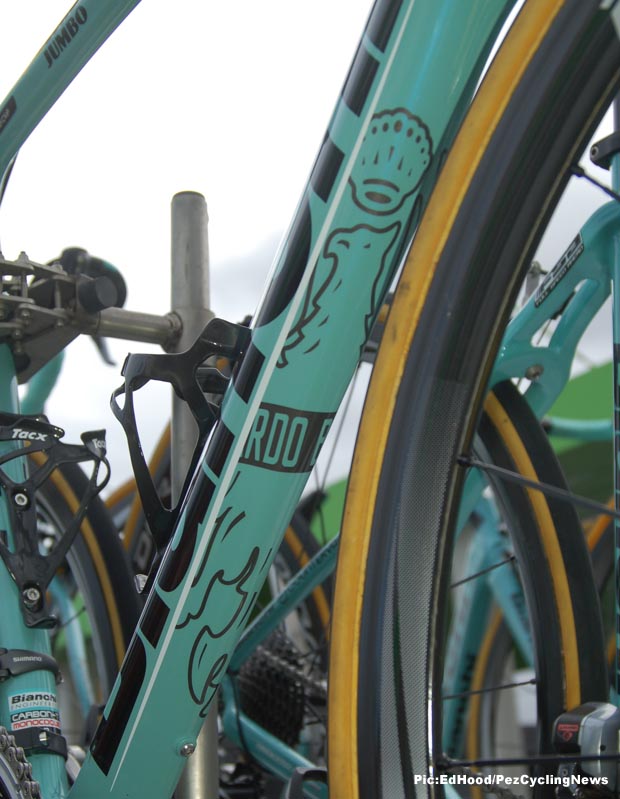 Bianchi have taken the recent trend for graphics beneath the down tube to a new level with sections of the famous head badge splashed under there. 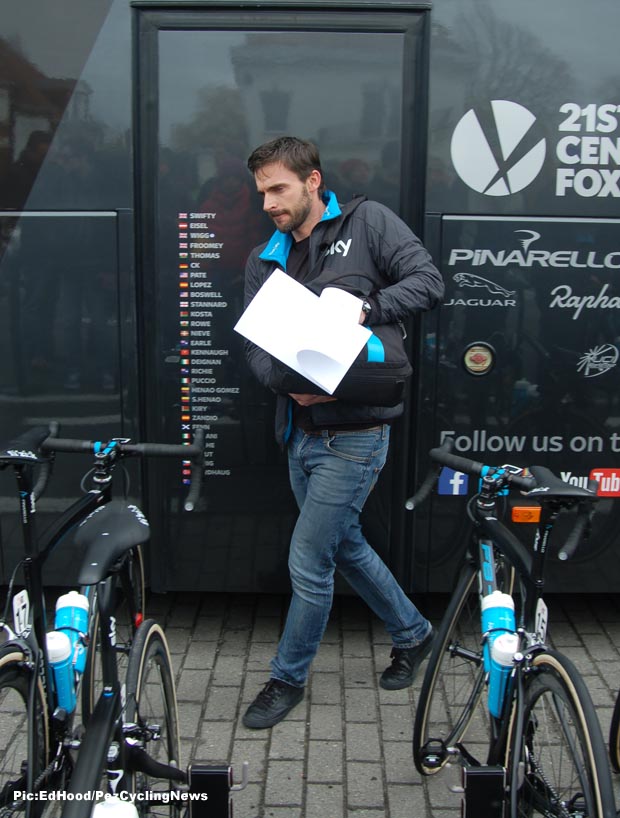 Meanwhile Sky DS Servais Knaven scurried around, battle plan in hand, trying to conjure the “double” with Viviani. The Edelareberg is the first climb of the day, really just the long Macadamed drag up out of Oudenaarde. If it’s hurting here then you know it’s gonna be a long day. There were seven a minute or two clear with a 3M guy in No Man’s Land, ahead of a huge bunch with a few already drifted back through the cars. 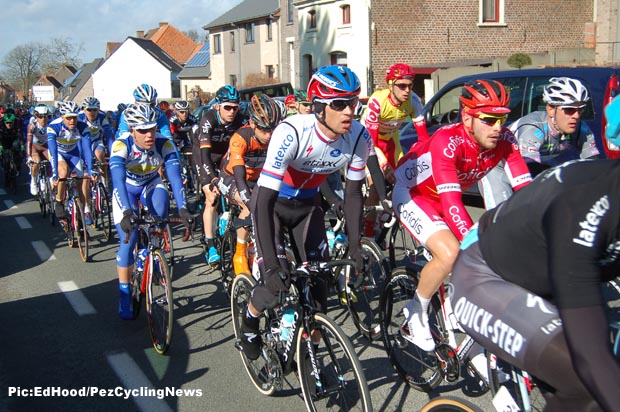 Former World Cyclo Cross champion, Zdenek Stybar wasn’t enjoying it but would enjoy another Patrick Lefevere tongue lashing even less and was hiding as best you can in a national champion’s strip. 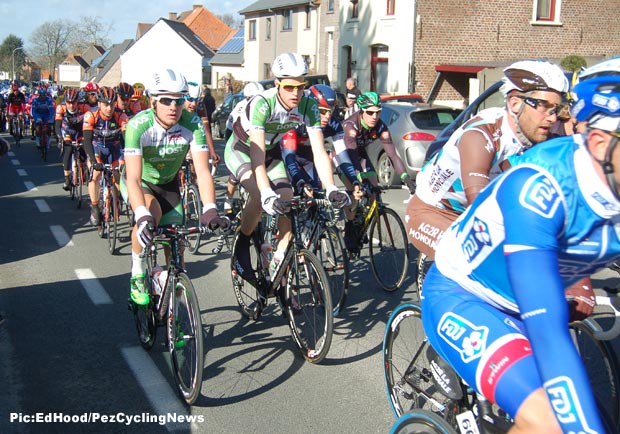 But it’s hard for AN Post’s Conor Dunne to hide, he’s a big lad. We had a word with him after the race, he crashed at the bottom of the Cote de Trieu but got back on at the foot of the Kwaremont, just in time for Quick Step to engage warp drive. 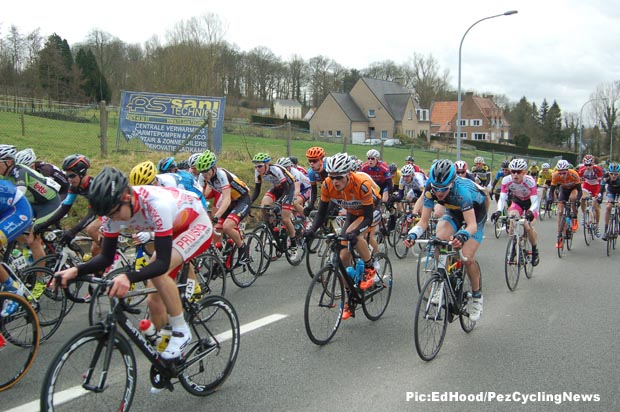 Time to head back to Oudenaarde for coffee and rice cake but not before we had to pull in to allow the massive junior KBK bunch pass. Ian Stannard won this one back in his youth and it was Englishman James Shaw who took the honours last year.

The parcours for Kuurne make it a tough race to see more than a couple of times, describing as it does a big flattened eastward loop which makes it very difficult to get ahead of. We opted to see it twice more, once at the top of the sixth climb, the Cote de Trieu and then at the top of the nearby Oude Kwaremont.

The Cote de Trieu is what Dave Duffield never used to tire of telling us was known as ‘Phil’s Hill’ – where Australian star Phil Anderson used to do his interval training. We got a little muddled on the revised parcours and missed them on the Trieu but had grandstand seats for the Oude Kwaremont.

The Oude Kwaremont is a beast; long, cobbled and with a false flat in the middle which catches the cross wind nicely. It was a classic ‘Quick-Step Kuurne salvage job’ – so many times we’ve seen them blow it on the Saturday only to restore honour on the Sunday. 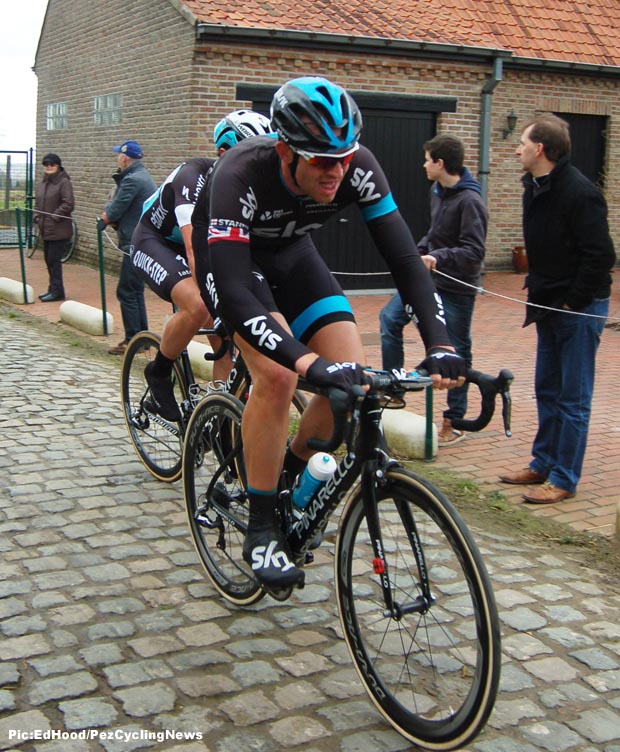 Despite Boonen’s massive Saturday out pouring of watts he was the man doing the damage on the Oude Kwaremont, tearing the race apart with Stannard well there too but not looking like he was enjoying it. 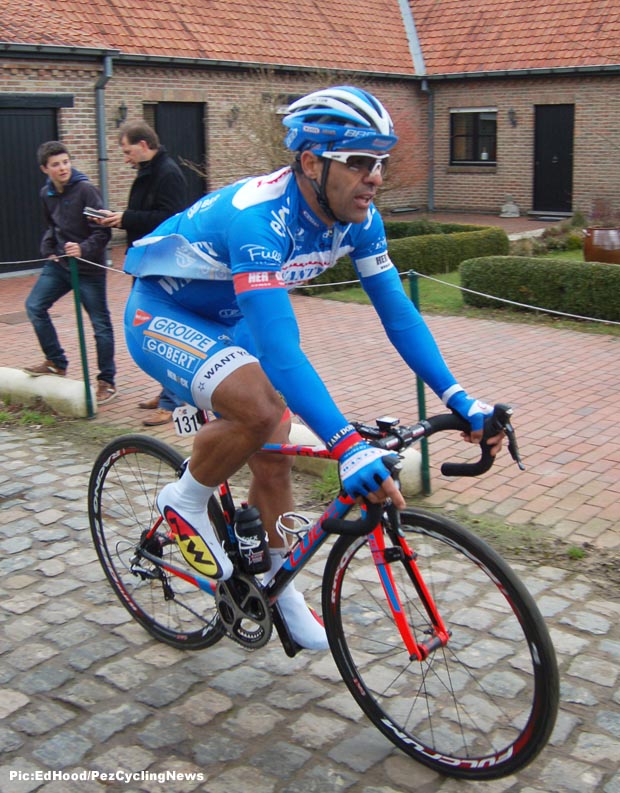 There were a few men in there who once upon a time could have been ‘right there’ in this race, Wanty’s Danilo Napolitano being one – but not this day as the once-rapid little Italian languished well back in the string. 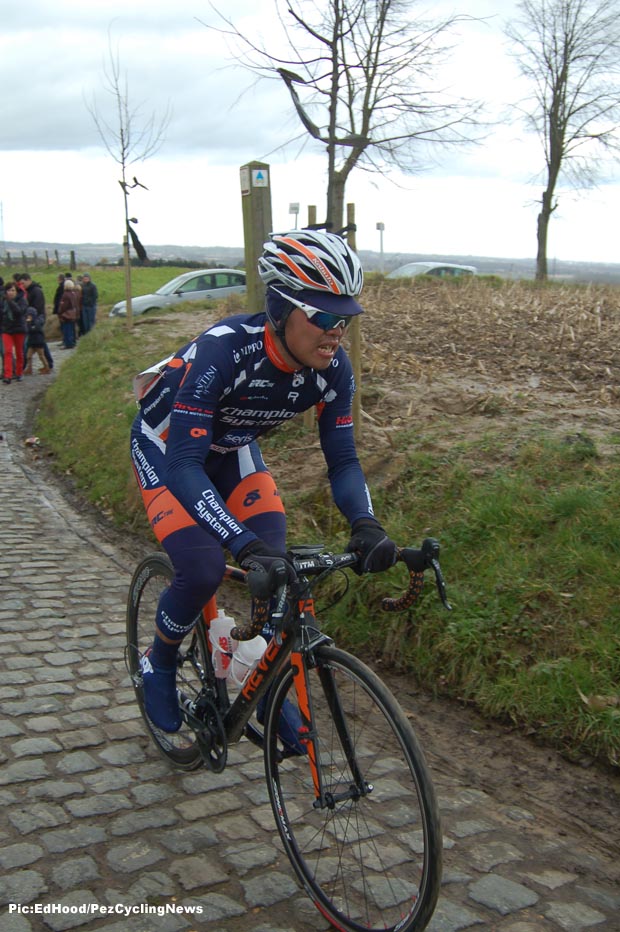 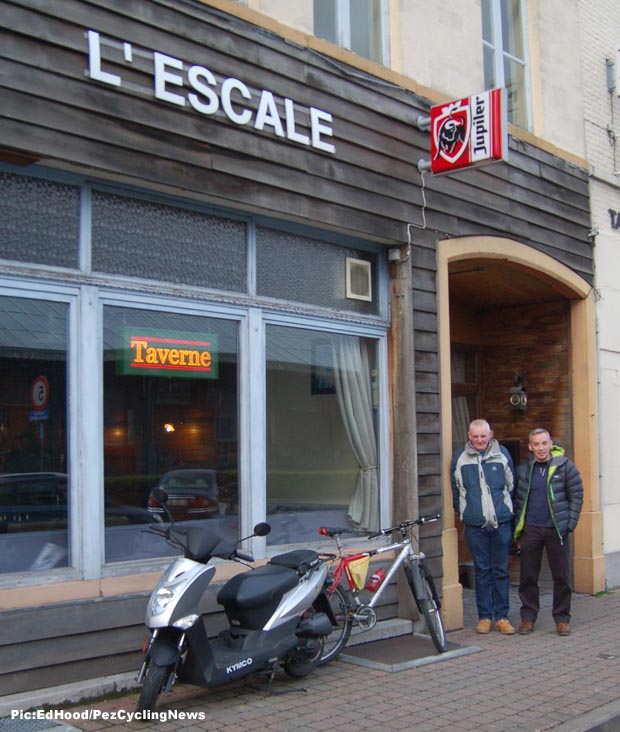 There’s no way you can get to the finish in time so we rattled down the very street in Ronse where the late Claudy Criquielion and Steve Bauer had that famous contre temps and got ourselves into L’Escale. Cav pulled the fat out the fire and we told our host; ‘l’anee prochaine, monsieur.’

There was still one job to be done… harass the mechanics back at the Holiday Inn in Gent. 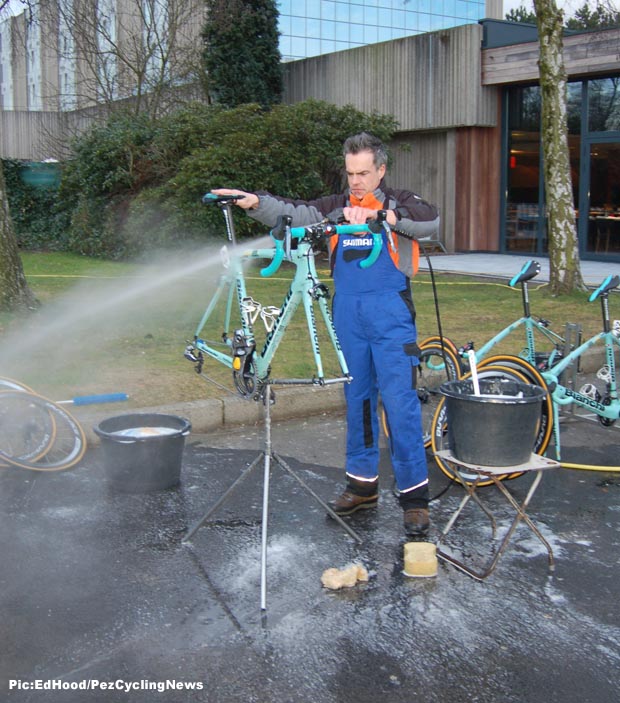 The French teams had bolted but Lotto-Jumbo was still there; in time honoured fashion the mechanic ‘accidentally’ blasted us with the jet wash – standard mechanic drill to see off the rubber necks. 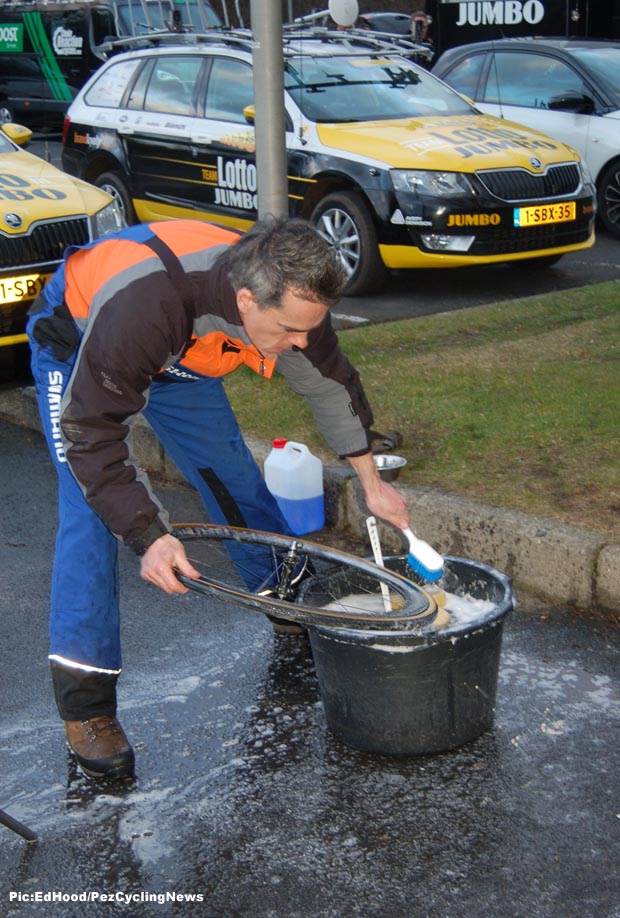 But we got the pics – including the wheel washing.

Another “opening weekend” in the bag – pity we can’t stay for Le Samyn on Wednesday.