La Primavera: Do We Really Need It?

This Saturday I have a meeting, a sort of rendez-vous coming back every year. It’s not just to chase a race, but something else. It’s a sort of life chasing through years, and people and facts and ghosts. With each year passing, the chase becomes more difficult. This Saturday it’s the Primavera day.

Cool morning air on the coast keeps the smoke pinned to the valley floors.

The Pez crew has a headquarters in Milan. The Castello bar in front of the Castello Sforzesco in Milan. Eight o’clock in the morning we have to be there. There have been editions when we were four or five people. A cappuccino, few words, and then everyone onto his own story and his own personal chase. Sanremo is so far from there but seems we already completed our day’s work. We are there, and that’s enough. 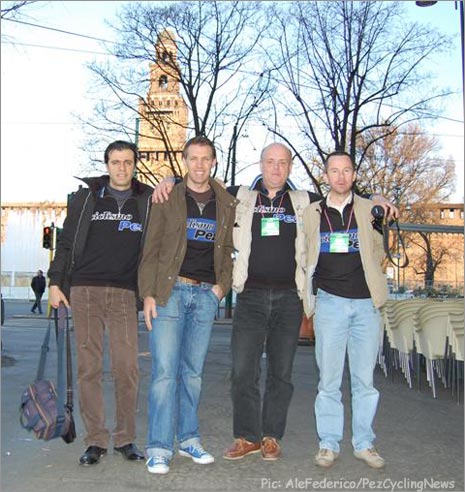 Ale, Matt, Ed & Martin two years ago for the official crew pic in front of the bar.

It’s not the race day, even if terrific, to make the Primavera. I always thought it’s the night before. You’re there alone, in your room. And you think to the next morning. Will be chilly? Will be cloudy? You check the maps, you know already and you can’t take a quiet sleep.

It’s definitely not the race make you roving around and you start think when did it start. When did it happen for the first time? 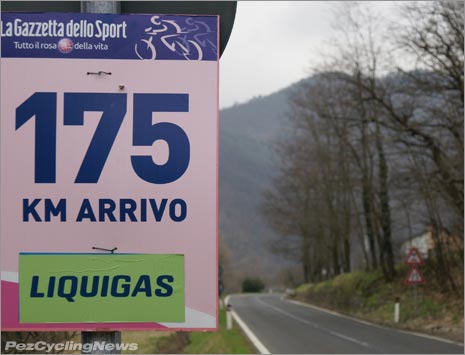 We’re not even halfway there…

Anyone inside has got the Primavera feeling. Just find it! There has been a time for everybody when that feeling touched you for the first time and probably now you’re still looking back for it. It was a couple of innocent eyes of a woman, or the hand of your baby. It was the quietness of a summer afternoon or a smell you felt years ago far away from where you are now.

That’s the Primavera feeling. Something you keep all your life. Something it’s absolutely necessary to chase every year. 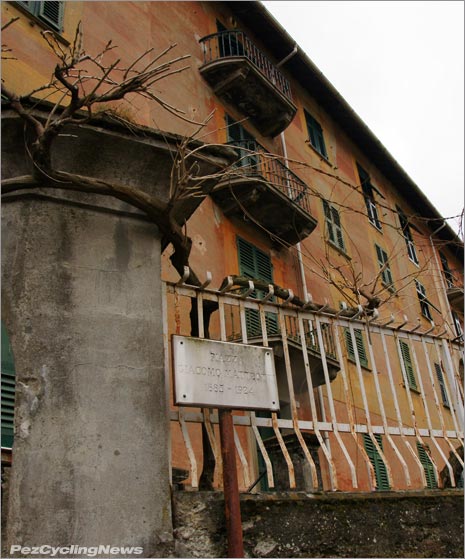 Ovada sits at the start of the Turchino climb. The misty shroud and barren branches belie the approaching Spring.

The Sanremo is a bike race, true. But look at it little bit closer. It’s a dream of few people that hundred years ago decided to ride from Milan to the sea. To the palms. It was a crazy idea, but it’s still alive. It’s not just a bike race, it’s a trip transporting you wherever you need. Those guys pushing hard on the bikes are not just doing their job, but are delivering a message sent long time ago. To be there is mandatory. 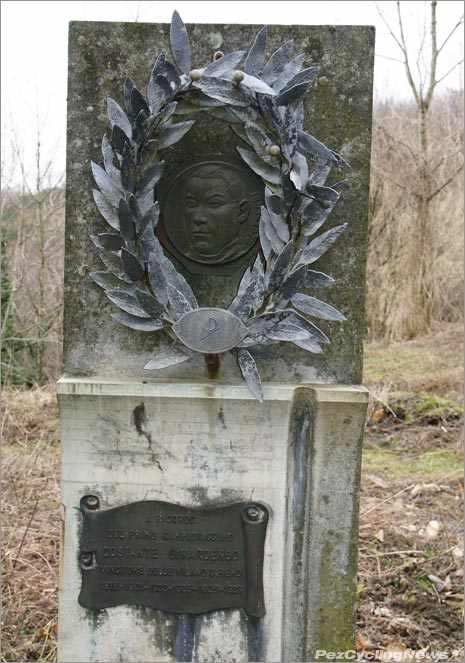 The monument to 6-time Primavera winner Constantino Girardegno signals the entrance to the Turchino Tunnel.

The Mediterranean beaches are still sleeping. The new sun has just touched them and it’s too early for the tourists. The lonely road of the Poggio is submerged in the quiet and some smoke is raising from the valley below. 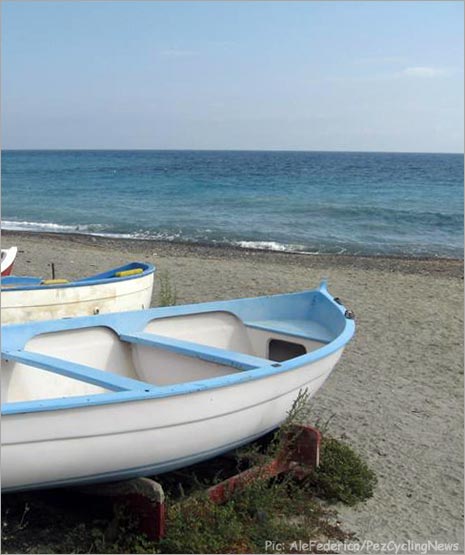 Everything changes after the Turchino. 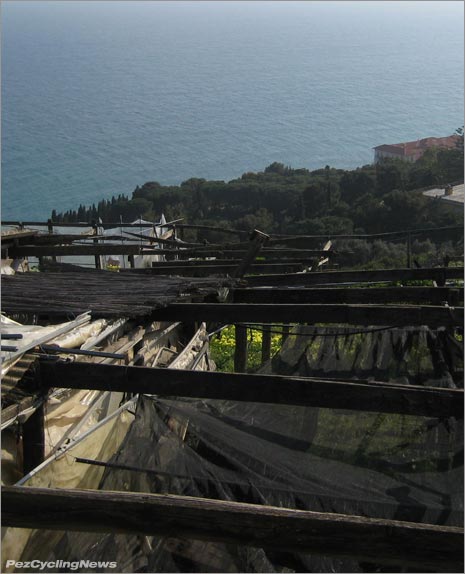 The sunny south side of the coastal mountains are ready for the season to bloom.

Be there. Be with us at that bar Castello, that morning eight o’clock, just to say: “yeah, we are here again”. Without really knowing why we do so. Just to watch someone else that is feeling the same you’re feeling. And you really don’t know what this feeling is. But you know, you’re sure, you can’t lose that moment. You can’t avoid to chase your Primavera. 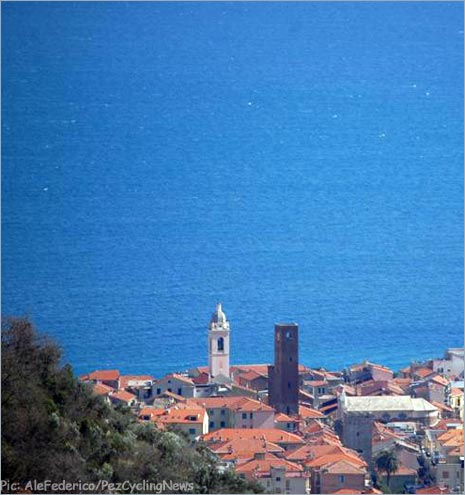 There’s no mistaking the Mediterranean blue. 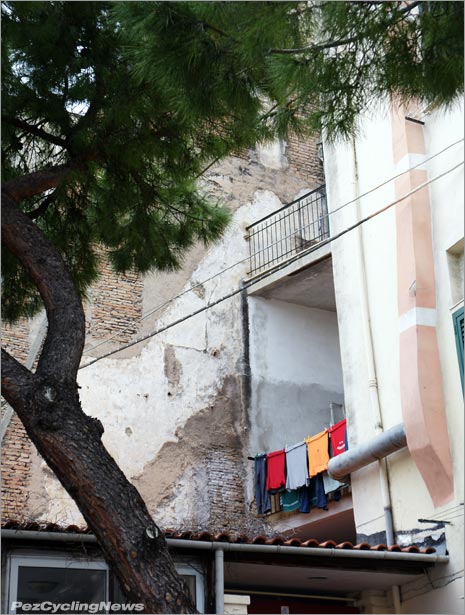 Yes, it’s a bike race. It’s the longest. It’s the first monumental Classic of the year. Then, at noon time, this race passes the Turchino climb and from the dark winter you are back to the Primavera. There’s a lot of people over there, coming back year after year. Not cycling fans. Just people that are doing that since they were born. The race passes and everybody looks happy. It was a moment only. But they were there for another reason. As you are.

Be there with us. Follow the Primavera day on PezCycling and read the roadside report on Monday. 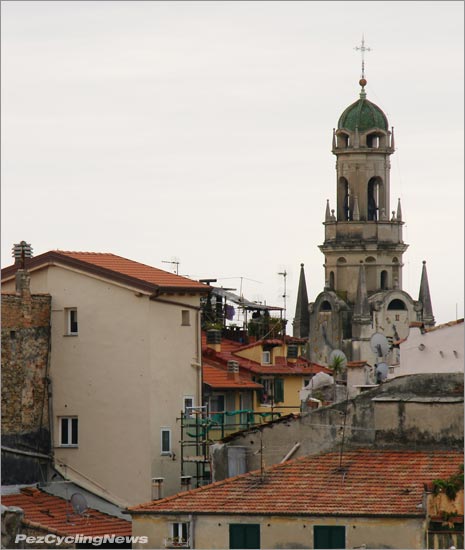 ——–
• We’ll have a full crew on hand – after the obligatory coffees, Matt Conn will cover the race start from Milano, Alessandro will hit the road and catch the race at several points along the way, likely embedding on the Poggio before the finale, Jered is flying to Europe as I write this and plans to join Ale for a guided tour at his first Primavera, Ed Hood will cover the race report, and I’ll be here at HQ watching the action via web, and editing and posting our content through Saturday. It’s gonna be a good one… – Pez