Lance Back To Calgary For Cancer Fundraiser

Lance Armstrong will be in Calgary on September 25 and 26th as the keynote speaker at a fundraiser hosted by the Calgary Tour of Courage Society. Last year’s event raised $1.4 million for cancer research, and this year the bar is even higher, and 25 lucky supporters will join Lance for a 120km ride in the Canadian Rockies.

Last year’s inaugural event was a huge success, as evidenced by the sold out $350 a plate dinner (1320 tickets were purchased, another 800 requests were turned away), and $1.4 million raised for cancer research. This year, organizers hope to attract even more donations by offering a chance to ride with Lance and George Hincapie. 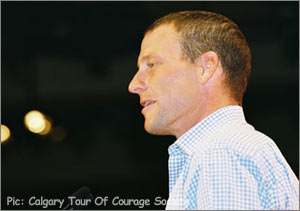 Lance delivered the keynote address at the 2003 fundraiser.

The event shakes down like this – a gala dinner and cabaret/ fundraiser is set for Saturday evening (Sept. 25). Tickets are $500 a piece. The next day, a lucky group of 25 will ride 120 km with Lance and George over the Highwood Pass from Longview to Kananaskis Village (120 km) – we’re talking Canadian Rockies, big vistas, and spectacular riding. Major donors contributing a suggested minimum of $25,000 to the cause will receive an invitation to join the ride, plus a bunch of other VIP goodies.

As the official online media partner for the event, PEZCycling News will keep you updated on the latest news, and of course provide full coverage from the event itself.

The Tour de France, considered by many to be sport’s most gruelling event, has never produced a six-time champion – until now! Lance Armstrong has achieved this milestone after surviving a serious bout with cancer, a bout that may have killed another person. Why did he survive?

This question will be explored by a research team headed by Dr. Chris Brown, Director of Research, at the Tom Baker Cancer Centre. “Lance Armstrong has not only survived a very serious case of cancer, he has thrived,” said Dr. Brown. “His story is not only inspiring from a sporting perspective, but also that of a medical research perspective. The Endowed Chair in Molecular Cancer Epidemiology is a six million dollar fund that was announced last year during Lance’s first visit. Already we have raised over 2/3 of the required funding for the Chair. In fact, we are so encouraged by the progress of the fund raising to date for this Chair that we are pleased to announce we will begin hiring the research staff immediately.”

John Dielwart, volunteer Chair of the Calgary Tour of Courage Society, is also very encouraged by the results to date. “When we brought Lance to Calgary in 2003, we formally kicked-off the fund raising for this special Chair. To hear now that the Chair has already been funded to this level motivates us as we continue our fund raising efforts with these coming events with Lance.”

On September 25, 2004 a very special dinner will be hosted by the Calgary Tour of Courage Society featuring Lance Armstrong, team mate George Hincapie, Chris Carmichael – Lance’s personal coach, Johann Bruyneel – Director of the US Postal Service Team and one additional team mate who has yet to be identified. The event will feature dinner, presentations by Lance and his team mates and coaches, a question and answer session and a cabaret after the dinner. Last year’s dinner was an extraordinary success and focussed on Lance as a cancer survivor. This year’s dinner will focus on Lance the athlete and promises to be an equally memorable event. Tickets are $500 each and are available at www.tourofcourage.com.

On September 26, 2004 a select group of cyclists will get the experience of a lifetime by riding with Lance and his team mates through the Highwood Pass from Longview to Kananaskis Village (120 km). A maximum of 30 cyclists will participate in this very unique event by making a minimum contribution of $25,000 to secure a spot in the ride.

For more information about the Ride with Lance visit our website at: www.tourofcourage.com.