Lance Armstrong and some of his special friends will be returning to Calgary in September to finish off raising $6 million for cancer research, and showing a select group of major donors how to ride the Canadian Rockies. And by “select” – we mean it could be you… 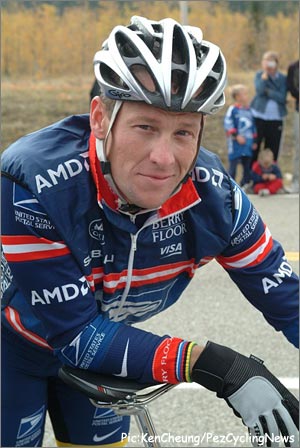 Making an unprecedented third visit to Calgary, Alberta in 22 months, Armstrong will assist in completing the necessary fundraising for the work planned through the Alberta Cancer Board’s Endowed Chair in Molecular Cancer Epidemiology, and increase the awareness of wellness and fitness as a tool for cancer research and treatment.

In Sight Of The Finish Line
In less than two years, largely through Lance’s previous two visits, the Calgary community has raised $5.4 million of the $6 million required to fully fund this cutting edge cancer research. The success of this project speaks volumes to the inspirational magic of Lance Armstrong and to the spirit and generosity of the Calgary community. In true Lance Armstrong form, the six time Tour de France champion has committed to seeing this project through to the finish line. 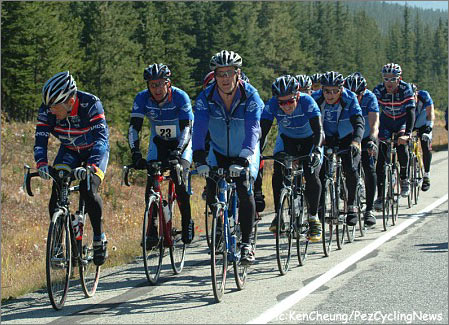 Lance and Joe Dutton lead the way up the Highwood Pass in 2004.

New Format For 2005
After two wildly successful years, Joe Dutton (one of the event’s organizers) and his crew were initially stumped for a way to top last years’ gala dinner and exclusive ride over Highwood pass with Lance, George Hincapie, Phil Liggett, Johan Bruyneel and Chris Carmichael. But Calgary is a town that thinks as big as the Rockies, so for 2005, the weekend will be scaled back in numbers – but scaled up in exclusivity and miles ridden with Lance.

George, Phil, and Johan have already expressed their interest in returning as well. 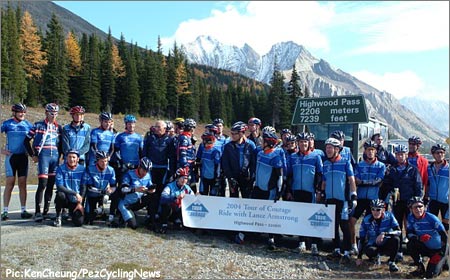 Lucky Dogs: the 34 particpants in the 2004 Tour of Courage ride with Lance pose atop Highwood Pass for the group shot. This year, expect more riding and time with Lance.

The Weekend With Lance
This year’s event is scheduled for late September and will involve Lance and friends leading a group of major donors and cycling enthusiasts for two days of riding through Alberta’s majestic Rocky Mountains.

About 30 lucky participants will spend the weekend with Lance and crew in beautiful Lake Louise, enjoying riding with the 6 time Tour de France champ to the Columbia Icefields, and through the picturesque Bow Valley Parkway to Banff. Accomodations will again be first class, and intimate dinners and time to hang with Lance will be featured through the weekend.

The main goal however is to complete the fundraising started in 2003, and in true Lance fashion, he finishes what he starts – and they’ve only got about $600,000 to reach their goal.

Last year’s minimum suggested donation to join Lance on the Highwood Pass ride was $25,000, so naturally a full weekend and 2 rides with Armstrong will encourage a slightly higher donation to the fund. 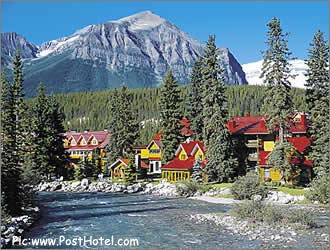 The Pipestone River flows along the backside of the Post Hotel offering guests a quieter setting, even closer to nature.

This is a great cause – so book it now and get more info at the Official website www.TourOfCourage.com
Or contact Joe Dutton at 403-681-5483

See The Video – Watch the short movie clip of last year’s ride on the Tour of Courage website.

Read more about the Calgary Tour of Courage:
1. Lance Back To Cancer Fundraiser
2. Liggett Joins Lance To Cure Cancer In Cowtown
3. Last year’s inaugural event was a huge success
4. Here’s How The Journey Began
5. Tour of Courage: the PEZ Report
Like PEZ? Why not subscribe to our weekly newsletter to receive updates and reminders on what's cool in road cycling?