LBL’12 Preview: From Stavelot to Liиge

Frank Schleck has hopefully learned that image is, in fact, not everything. As he propelled the 2007 edition of the race known as La Doyenne towards the finish, Schleck, lean and powerful and in full command, methodically charged up the final 500 meter incline. The silver chalice on the podium glistened where his name would soon be etched among the list of greats. As the television camera panned back, a second rider came into view.

– Contributed by Peter Easton of Velo Classic Tours – this article first ran a couple years back, but remains a worthy read.

Danilo DiLuca was bolted to the tip of his saddle, grimacing as he struggled to match Schleck’s effort, his discomfort timed by a rapidly emptying hour glass, his shoulders locked against the pain coursing through his body. As the incline faded 200 meters from the finish line, the sale of DiLuca’s soul was finalized and time stood still just long enough for him to raise his arms in triumph. And while this finish provides the glossy cover image that defines a Spring Classic, it is only one of thousands of snapshots collected over time that tells the story and paints the picture of what is arguably the hardest single day race in the world- Liиge-Bastogne-Liиge. 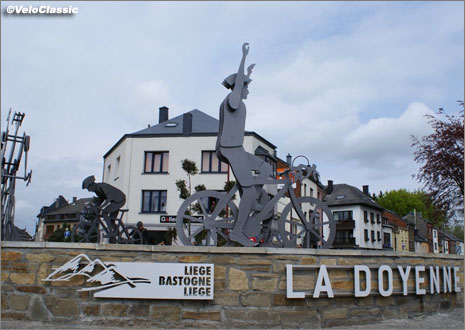 If the Tour of Flanders is in your heart and Paris-Roubaix is in your head, then Liиge-Bastogne-Liиge is a race that is clearly in your legs. And while winning its midweek partner La Flиche-Wallonne is surely a great achievement, laying claim to the oldest classic of them all is what will keep your name on everyone’s lips. 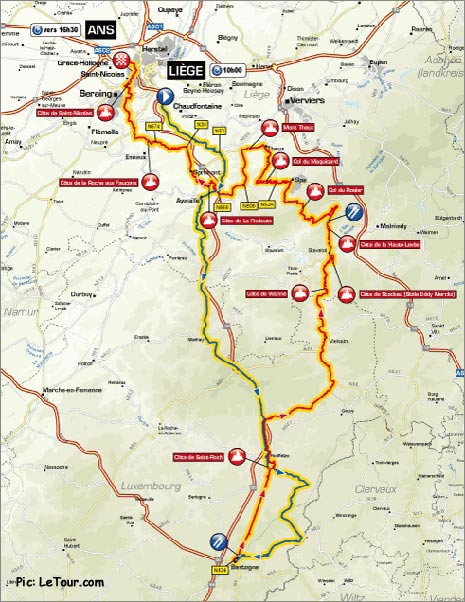 Liege to Bastogne and back again – 255km of leg busting war over some of the most historic battlegrounds in pro racing.

While an intricate knowledge of the cobbles of Flanders and pavй of Northern France is a prerequisite for success, conquering Liиge-Bastogne-Liиge requires pure strength. Paris-Roubaix is unmatched in its uniqueness and the Tour of Flanders is, in so many aspects, the most beautiful. But as the oldest Classic, it is this race that demands the most when it comes to pure strength and battling attrition. No man has ever won Liиge-Bastogne-Liиge on luck. 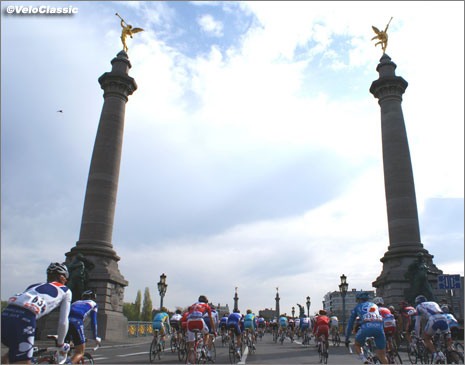 Of the Five Monuments of Cycling- Milan-Sanremo, the Tour of Flanders, Paris-Roubaix and Il Giro di Lombardia the others- it is Liиge-Bastogne-Liиge that lacks the glamour. There is no medieval market square to celebrate the start, no historic stage to showcase the finale. There are no shadows cast from the marble spires of a Gothic cathedral, no grand lakeside boulevard for the sprint. It is, however, the only race that does not depend on its image to sell itself. It is the only one of the five that dispatches its riders, puts them on a course of systematic and methodical elimination, and patiently awaits their return. 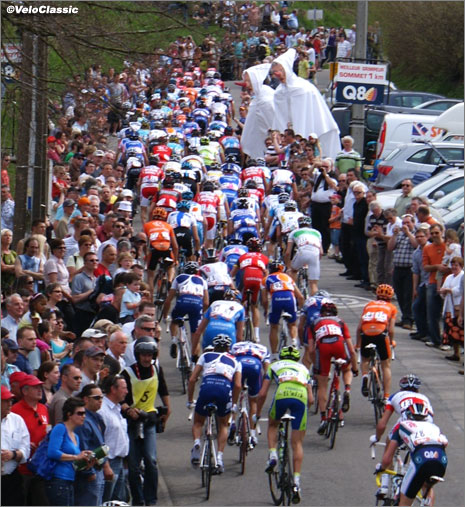 No untimely flats or unfortunate crashes caused by cobbles, no narrow lanes to negotiate. And if the first 170 kilometers is the introduction, it is the final 85 that activates the race, underscores the visual distinction between country and city, and highlights the enduring history between Stavelot and Liиge. 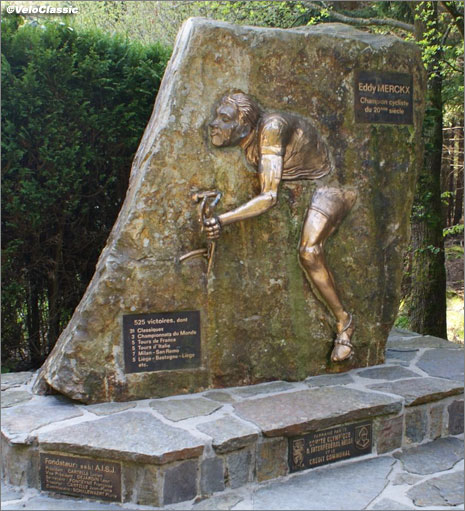 The ruins of the Abbey of Stavelot dominate the center of town, the remains of a once important center of Christianity purposefully destroyed. The village lies at a critical junction in the heart of the Ardennes, and while it is less than 60 kilometers from Liиge, it’s charm is infinitely further from the post industrial apocalypse that has gripped Belgian’s iron city, and even more from its own scarred past. 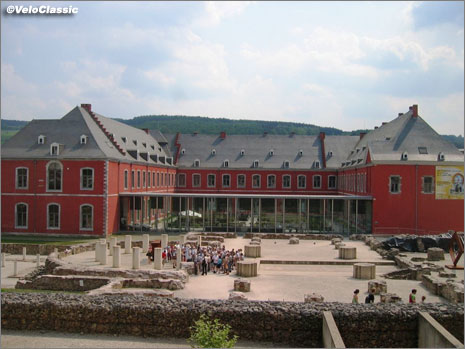 One, the city on the Meuse, is haunted by the shuttered coal furnaces and abandoned steel plants that once built this region into an industrial power. The other, the village on the Amblиve, is simply haunted by blood stained hands. Further souring the haunting aftertaste in Stavelot that lingers from its bloody past is the memorial to the citizens and soldiers killed in World War II, a stark reminder of the ugliness man can paint over nature’s canvas. It is here on race day that a new battle begins, an annual pilgrimage again rewarding the aggressor and condemning the cautious. 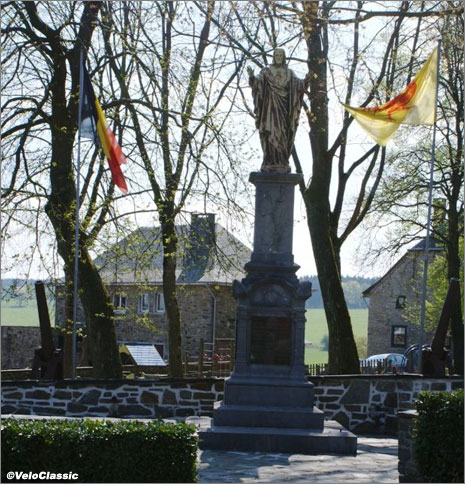 The Stavelot Triptych is a medieval reliquary that contains two slivers of wood from the True Cross, presented as a gift to the Abbey in 1156. Centuries before, the Abbey was home to the exiled bishop of Maastricht, Saint Lambert, for seven years, before he returned a martyr to preach his gospel on the banks of the Meuse, and was murdered in Liиge. The Place Saint Lambert, built on the original location of Liиge Cathedral that housed the Saint’s tomb, has the honor of hosting the race start. Leaving Liиge, the landscape, a wave of continuously verdant hills, appears on the horizon, and the beauty of the Ardenne Bleue is lit from the ground up, as blossoming flowers color the grass light blue, almost mirroring the sky. 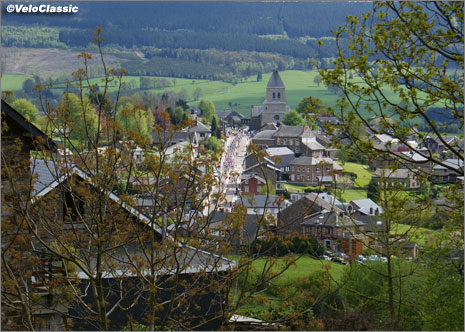 The indigenous architecture is accentuated with local stone, shimmering in the morning sunlight varying shades of blue. Villages swell with spectators, pausing to pay tribute- a moment of silence- at the local war memorial. Unlike its Flemish counterpart, the Tour of Flanders, this day is not a wild chase across the narrow back roads of an open countryside. This is a day that memorializes a dark past as much as it celebrates, at least for a day, the beauty of the present. It is a day of pride for Wallonia, this fourth Sunday in April, and they are proud to be the center of the cycling world. 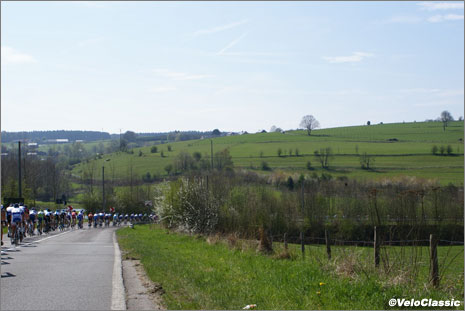 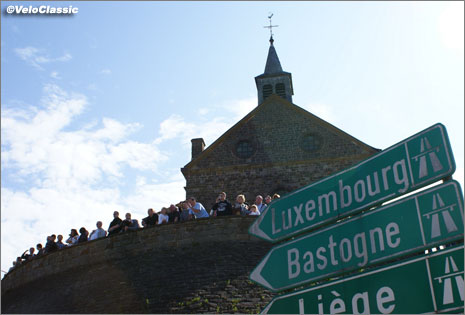 As the race taps Bastogne, its furthest point to the south, it’s as if a charred hand rose from the coal mounds of Liиge to choose its boundaries, a blackened finger selecting Bastogne, unaware of the ominous designation bestowed. 66 years on from its nightmare, the church bells from the reconstructed belfry ring proudly at 1:00 pm as the peloton navigates the village. Numerous memorials surround the town, locking in to the horrors of 1944. The newest memorial was happily welcomed, designating their proud history as patron of this race, a gesture fittingly displayed with the dedication of Le Rond Point la Doyenne. From here, the charred hand of Liиge will begin to open its palm for one rider, caressing him to victory. For the rest, it’s a clenched fist, as tightly closed and cold as the factories it built. 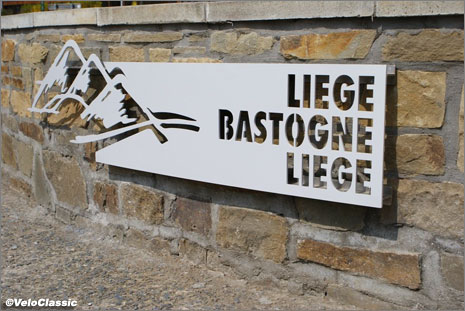 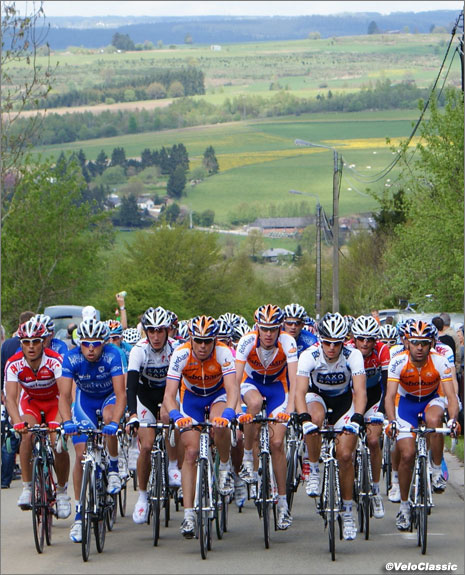 Like the other Monuments, Liиge-Bastogne-Liиge has its icon that captures the spectator’s imaginations, solicits the expectations, instills confidence in the strongest, fear in the weakest, and produces the drama of anticipation that cycling’s biggest figures willingly tend to annually, battling for the honor to place this squarely on their mantle of success. This centerpiece is La Redoute, a stifling sequence of steps that rises steeply alongside the A26/E25 highway and whose lifeline is close to being choked closed by the gauntlet of fans that swarm the hill. The irony of it all is the intensely beautiful backdrop this is played out against. 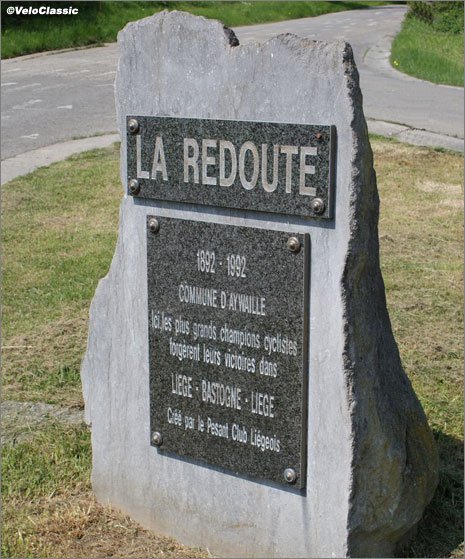 Approaching Liиge, the smoke stacks that once heaved and belched plumes of smoke into the sky appear on the riverside. The circuitous chase up the monochromatic street of the Cфte de St-Nicolas and through the worn maze of Liиge is reminiscent of a high speed chase of cops and robbers with one, two maybe three men in close pursuit, negotiating the tight turns, dips and rises. If grey was not a color, it would be mournful and miserable. Thankfully the peloton rotates like a kaleidoscope, bringing a prism of color to an otherwise dreary neighborhood. 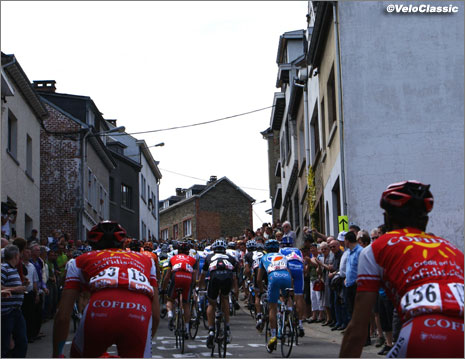 The innocuous finish in Ans, uphill from the Place Saint Lambert, is crammed onto a boulevard whose main tenants are a Carrefour super market and exit 33 off the A3/E40. Even if this race rejects any sense of glamour, the honor bestowed on its victor is a success that resonates beyond the podium. One is forgiven if the silver chalice handed to the winner is thought to have come from the bounty seized from the Abbey of Stavelot, polished, glistening and reflecting the moment that captures the glory of realization that can only be seen when you close your eyes. To the winner, this finish is as glamorous as any. 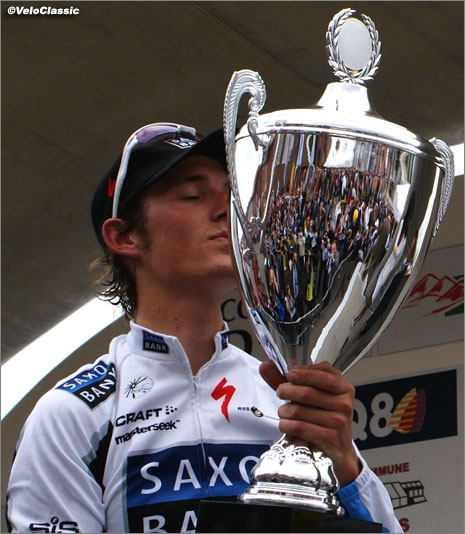 In 2006, as the race entered Stavelot, a lone rider split the crowd that lined the Cфte de Stockeu, the last remnant of a 26 rider break. I stood alongside the cobbled street in town, staring at the ruined archway of the Abbey. The race was almost five hours old. As the lead cars thundered into town, the distinct noise of tires on cobbles ignited the air, trumpeting the start of St Lambert’s pilgrimage. As I glanced back across the cobbles, a lone cyclist’s reflection flashed brilliantly in the window adjacent to the Abbey’s arch. A second later he appeared, scorching across the cobbled streets of Stavelot before disappearing into the thick crowd. The path chosen by a martyr is never an easy one. But that doesn’t mean it cannot be a beautiful one.

Peter and Lisa Easton are experts on everything Spring Classics and beyond. Catch up with them on the road with Velo Classic Tours and one of their eleven itineraries to the Classics. Visit VeloClassic.com for more information.
Like PEZ? Why not subscribe to our weekly newsletter to receive updates and reminders on what's cool in road cycling?