During the Tour de France Lee Rodgers took himself to Japan for a sad event, but that visit re-kindled his love for the roads and scenery of Japan. It’s not all crowded neon lit Tokyo, geisha girls and sushi, there is so much more to the land of the rising sun; climbing the mountains of southern Japan, rolling through the rice fields or sprint action on the Keiren track.

I wasn’t actually heading back to Japan, the country I lived in for ten years, with the intention to ride my bike at all. I was going there, in fact, to send off a dear old friend on his final journey. That friend was my ten year old dog, Moose. I carried him onto the plane in my arms, all quiet, peaceful and freshly cremated, in a small container that was totally out of proportion to his former 38kg of burly Labradorness. I was taking him back to my old adopted town near Fukuoka, in southern Japan, the land where he was born, to be scattered by the winds atop the mountain where we often played when he was a pup.

My wife and I drove up the hill, a steep 8km beast that I used to train on, parked up and got the essentials out of the car. Moose-in-a-Box, shovel, my old, hole-filled socks and a photo of us with him, taken years ago up on that very hill. I huffed and puffed as I dug the hole, then we scattered half the ashes and put the rest into the hole, added the socks and the photo and some nibbles, filled it in with a little tree planted on top, and finally lit some incense as we said our goodbyes.

It was a beautiful day and also a beautiful little ceremony that was filled with more smiles than tears. I always think that if you’re going to do something, do it right, and I think we did that this time (even if I did spend a fortune on the plane tickets, though, naturally, Moose traveled free).

From there it was back to town and directly to the local izakaya (Japanese pub/restaurant) where we proceeded to first get stuffed on the delicious food and then to get absolutely hammered. When a good friend has gone, his life must be celebrated and the next day you better wake up with a titanic hangover. There simply is no other way to honor the dearly departed, be they furry sort or not! 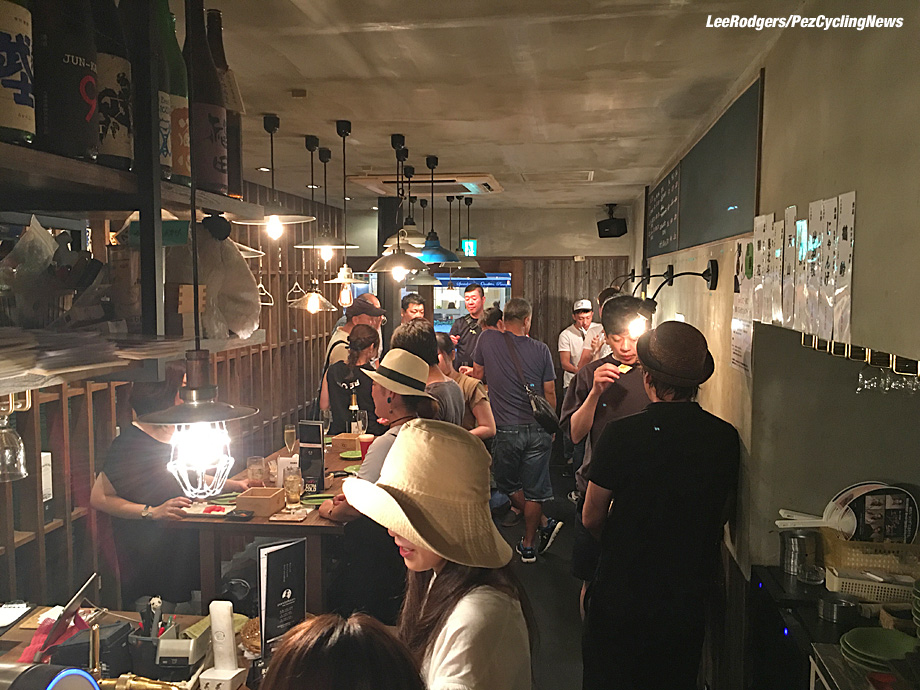 The Panda Bar, Ideal for Wakes for the Four-Legged 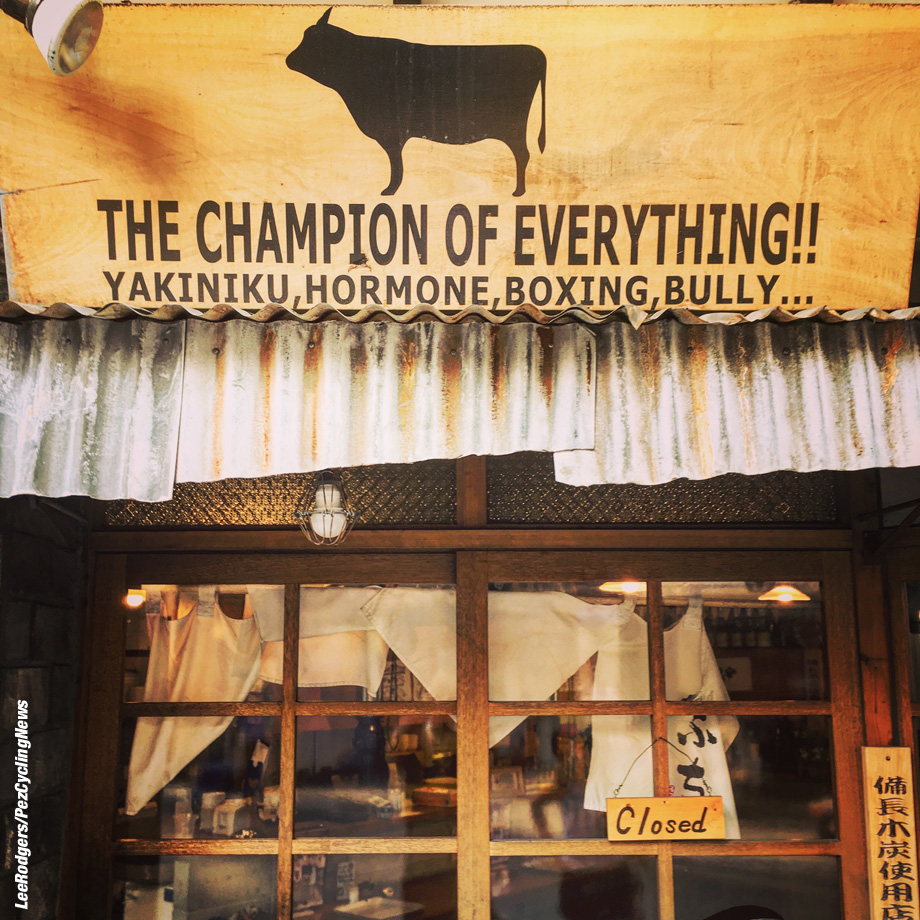 The Champion of Hormone! 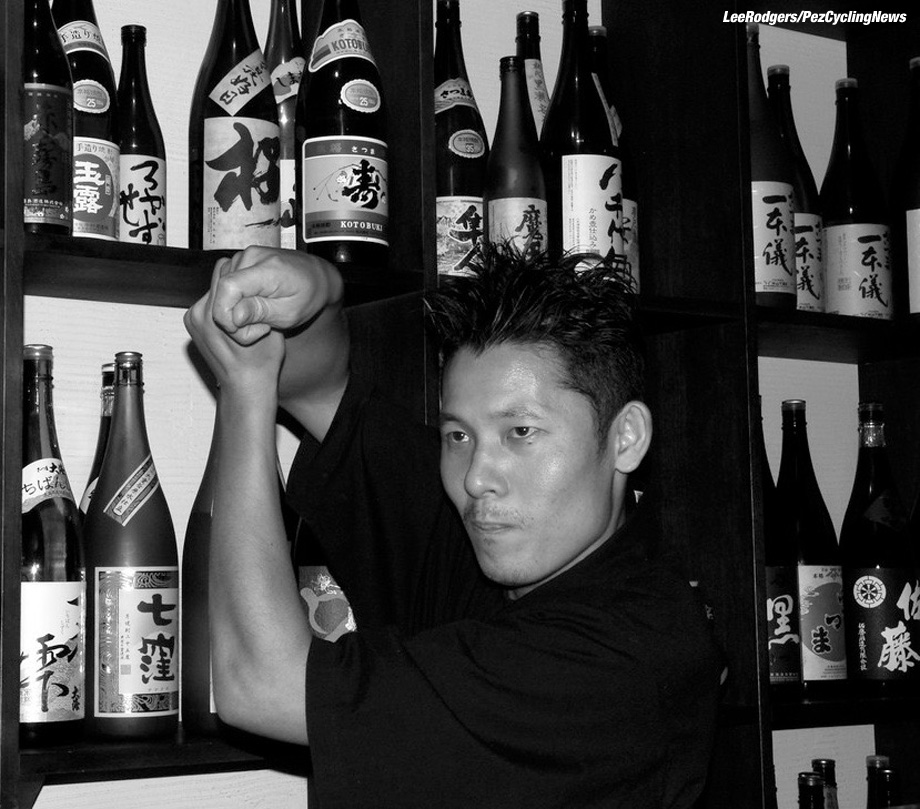 Suguru-Kun, the Izakaya Samurai that forgot his sword 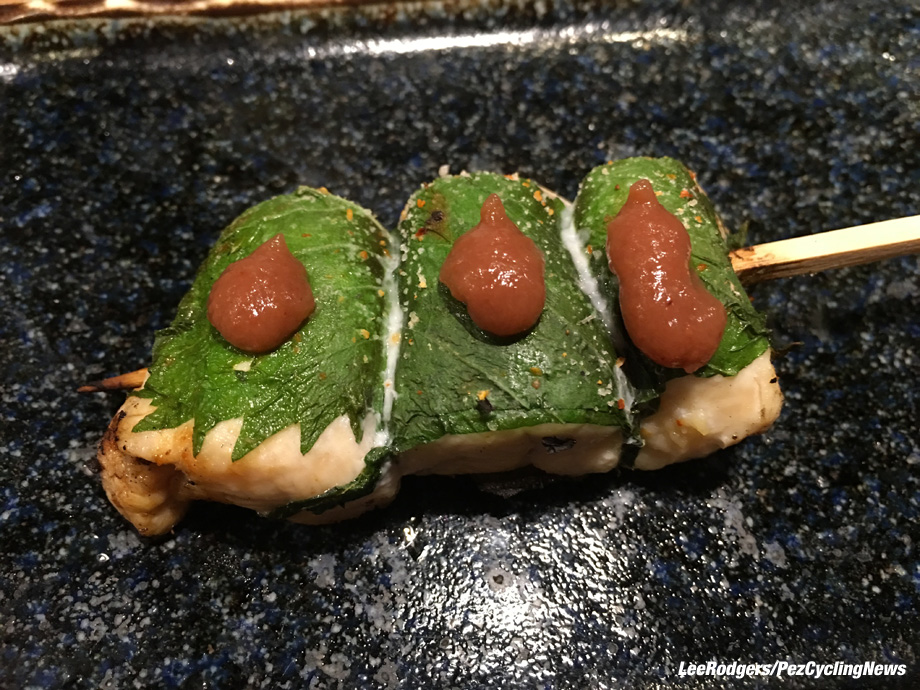 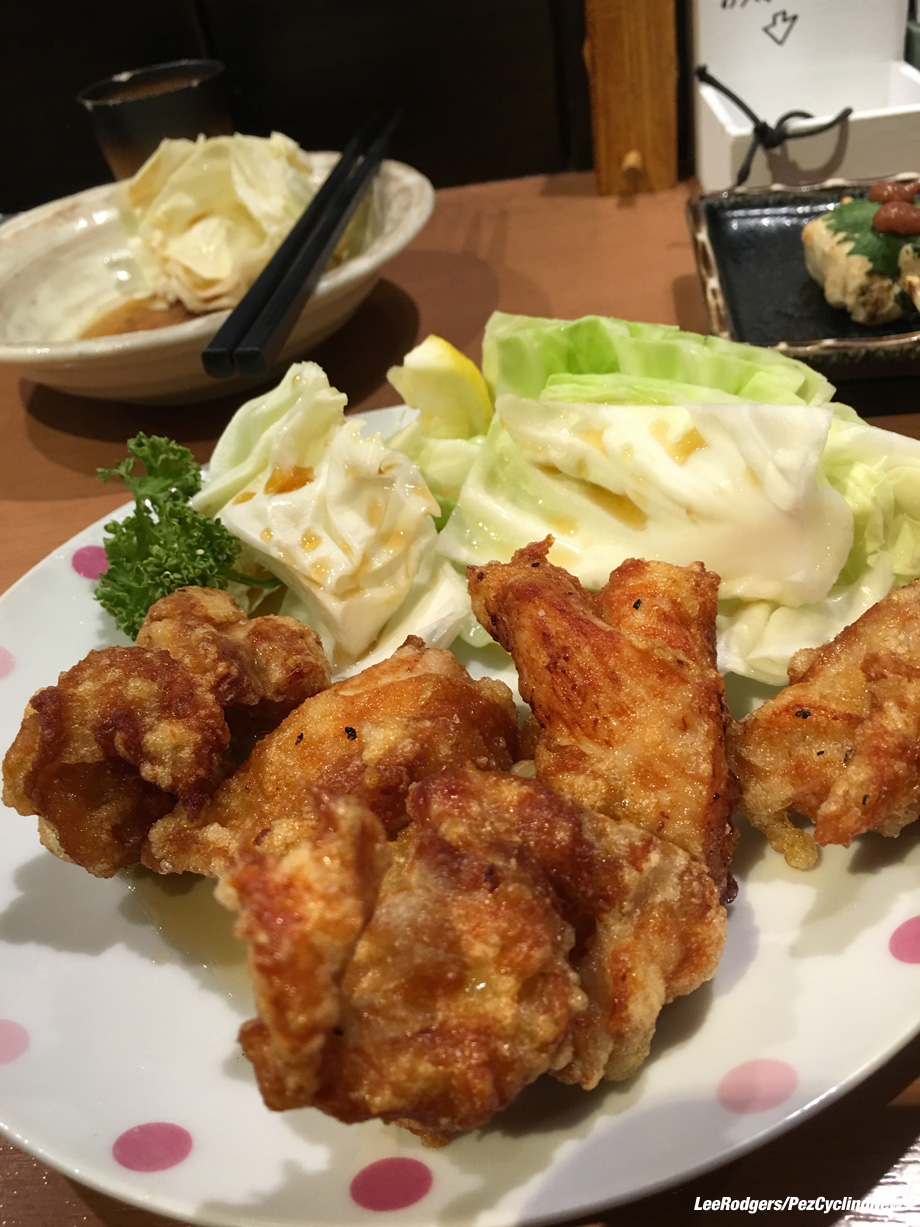 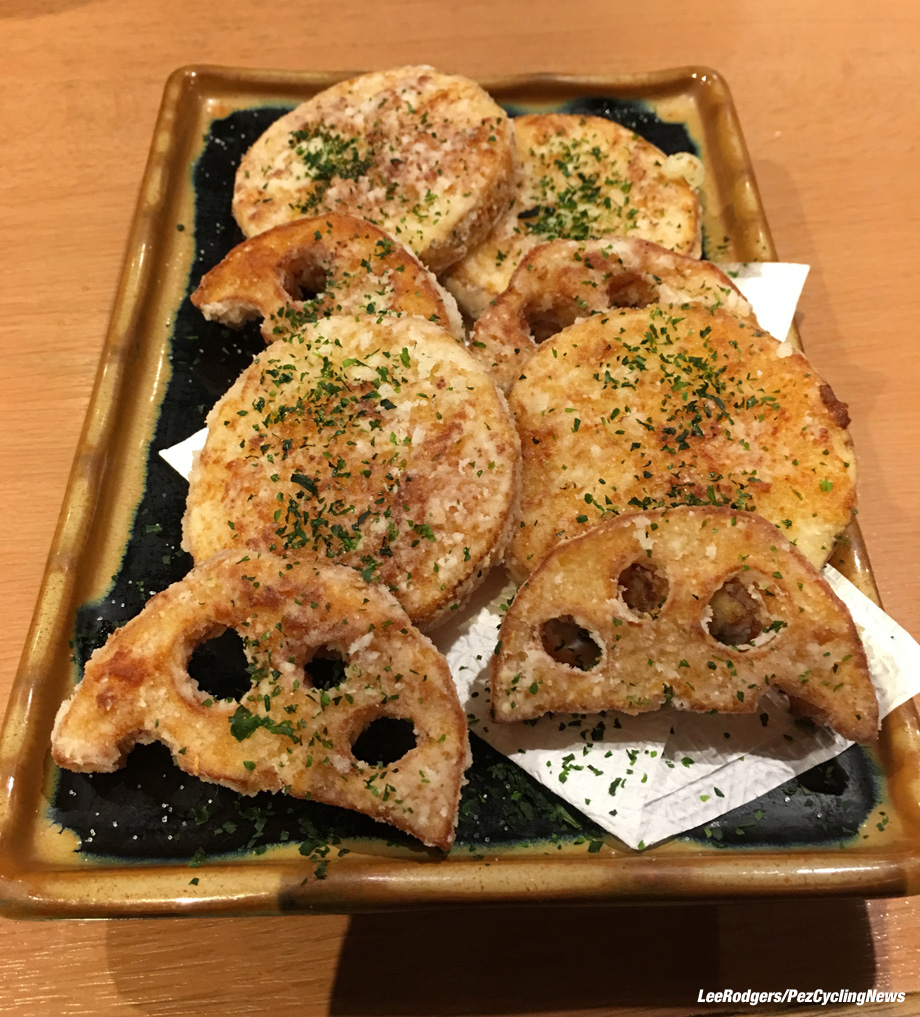 So, with a banging head and that sense of doom-filled foreboding that only a whiskey/sake-fueled hangover can sufficiently unleash, I found myself wanting to do nothing else but ride. I ended up in my mother-in-law’s garage and there in a dark corner, much to my surprise, sat my old Cervélo, partly assembled. I remember leaving it there when I moved to Taiwan but ended up riding sponsor’s bikes for the years since. So, I got the saddle and wheels on, dug out some old kit and 10 year old shoes, and off I ventured. 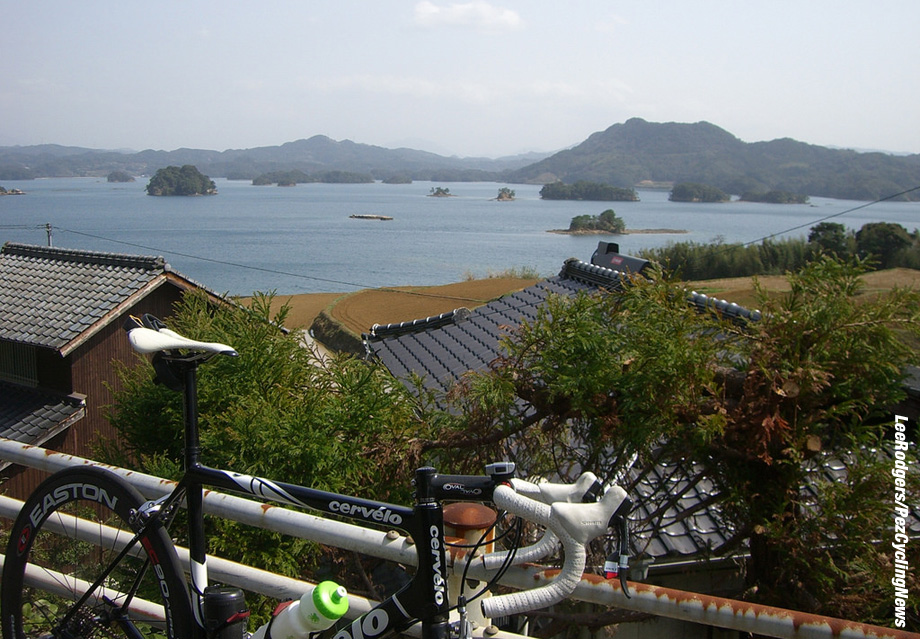 Where we used to live you have two options. Flat and windy, or not so windy and very un-flat. Not fancying being buffeted by the tail end of the most recent typhoon, I went towards the hills, hills I knew very well from my hours of getting lost in them just a few years before. Anyone that has moved away from a place that feels like home, a place where they used to ride a lot, will understand the sensation I had that first day of riding. When you go back to these places for a visit, you really should take your bike, you get the warmest feeling as you pedal along those old roads, roads that welcome you back, even if they might punish you for a while. 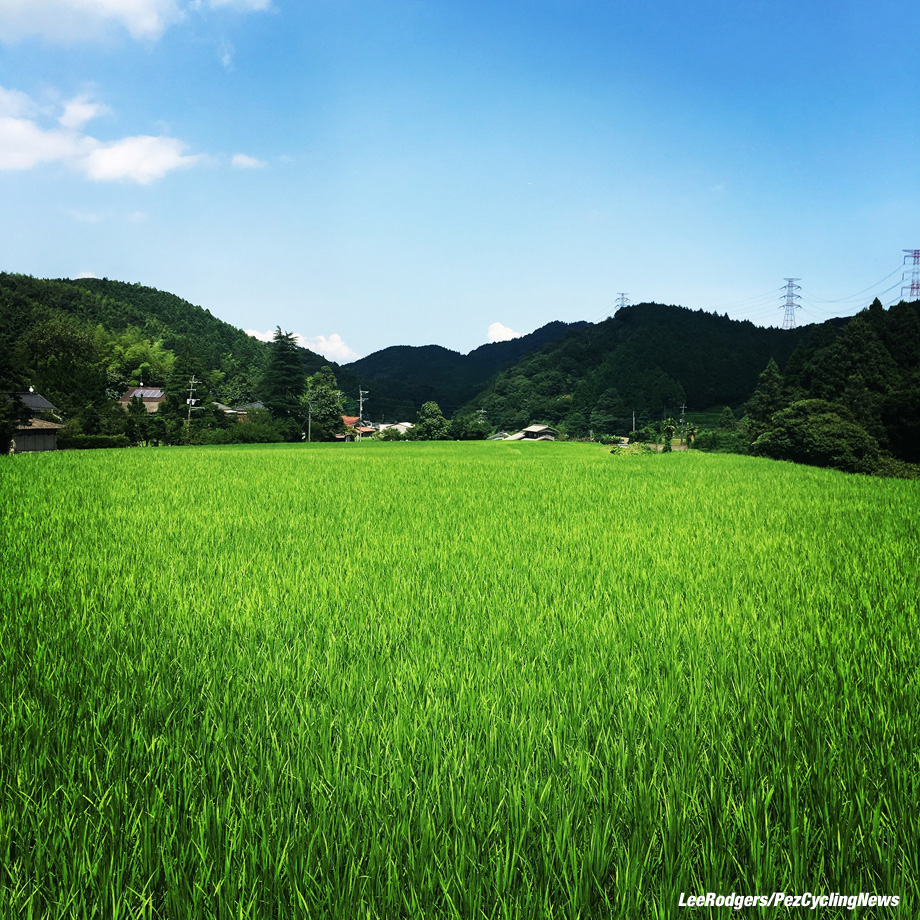 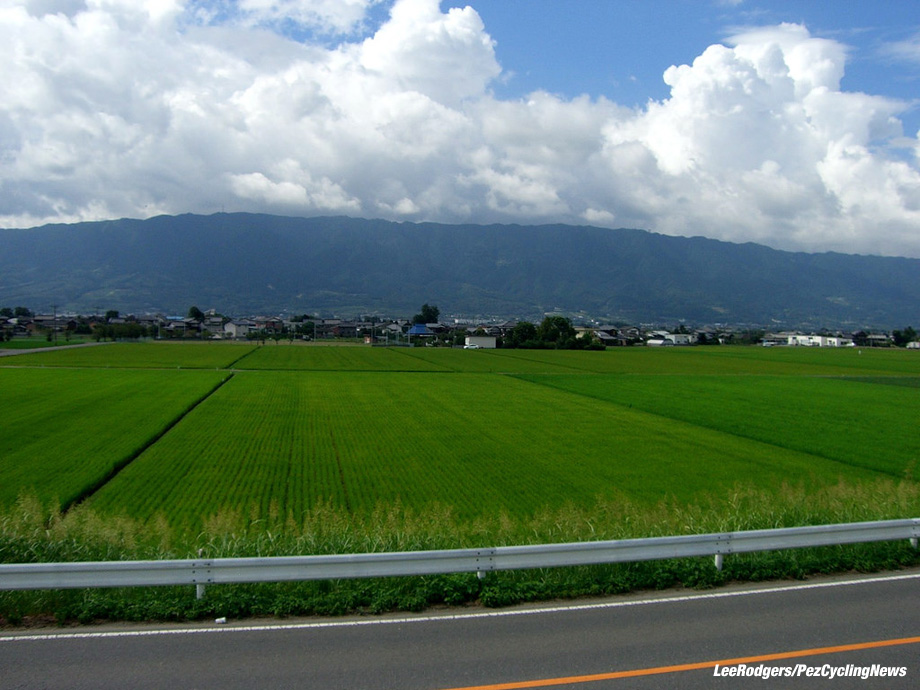 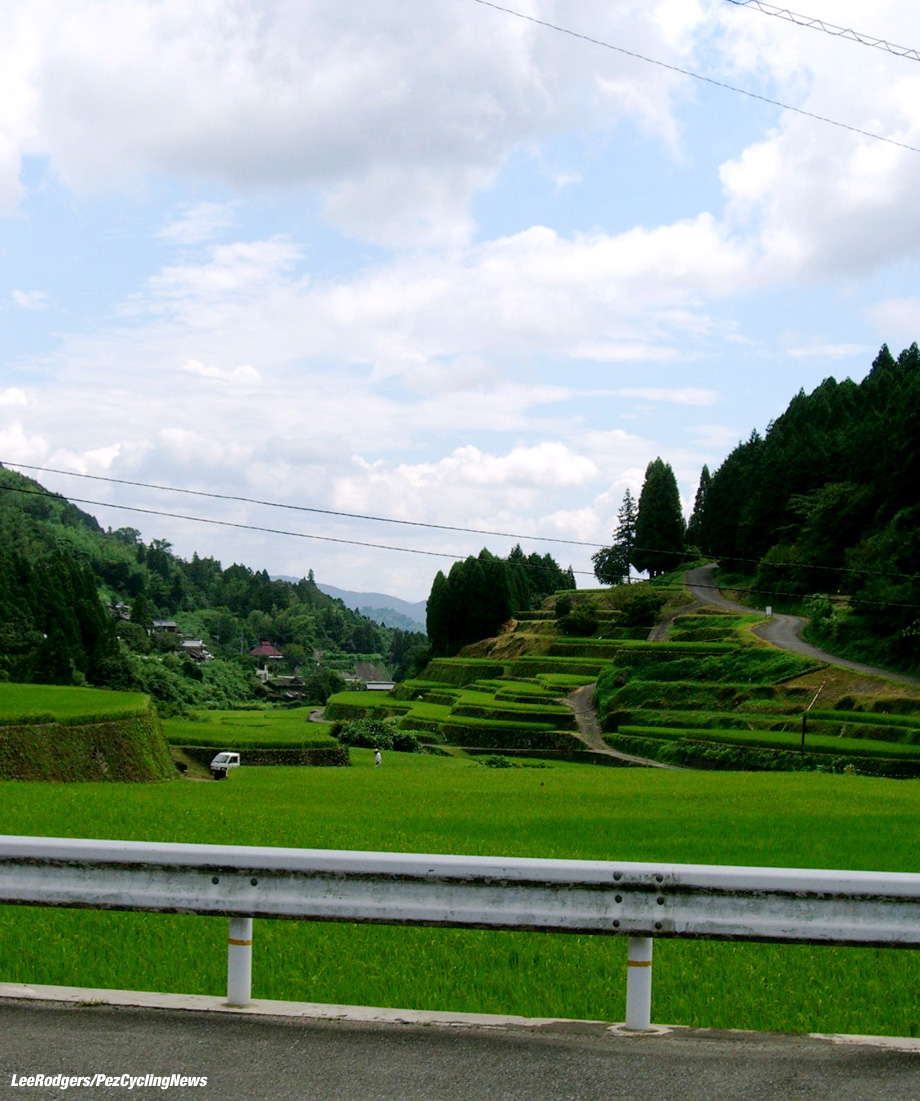 Before the hills, the ride through the rice fields

For most people who have never been to Japan, the images in their minds often go no further than the neon-lit urban sprawl of the giant conurbation that is Tokyo and Osaka, with the odd giggling geisha and perhaps a sushi roll or two thrown in. However, as you can see from these images above, if you head out of these cities and towns by bike, you’ll be met by vistas of swaying rice fields that lead you from the plains into almost literally endless mountains. With only 25% of the main islands inhabited, and a questionable culture of concreting and paving much of the countryside to line the pockets of politicians deeply entrenched, there are so many perfectly laid ribbons of road up in the hills and along the coasts that combine to render Japan an absolute cycling paradise. 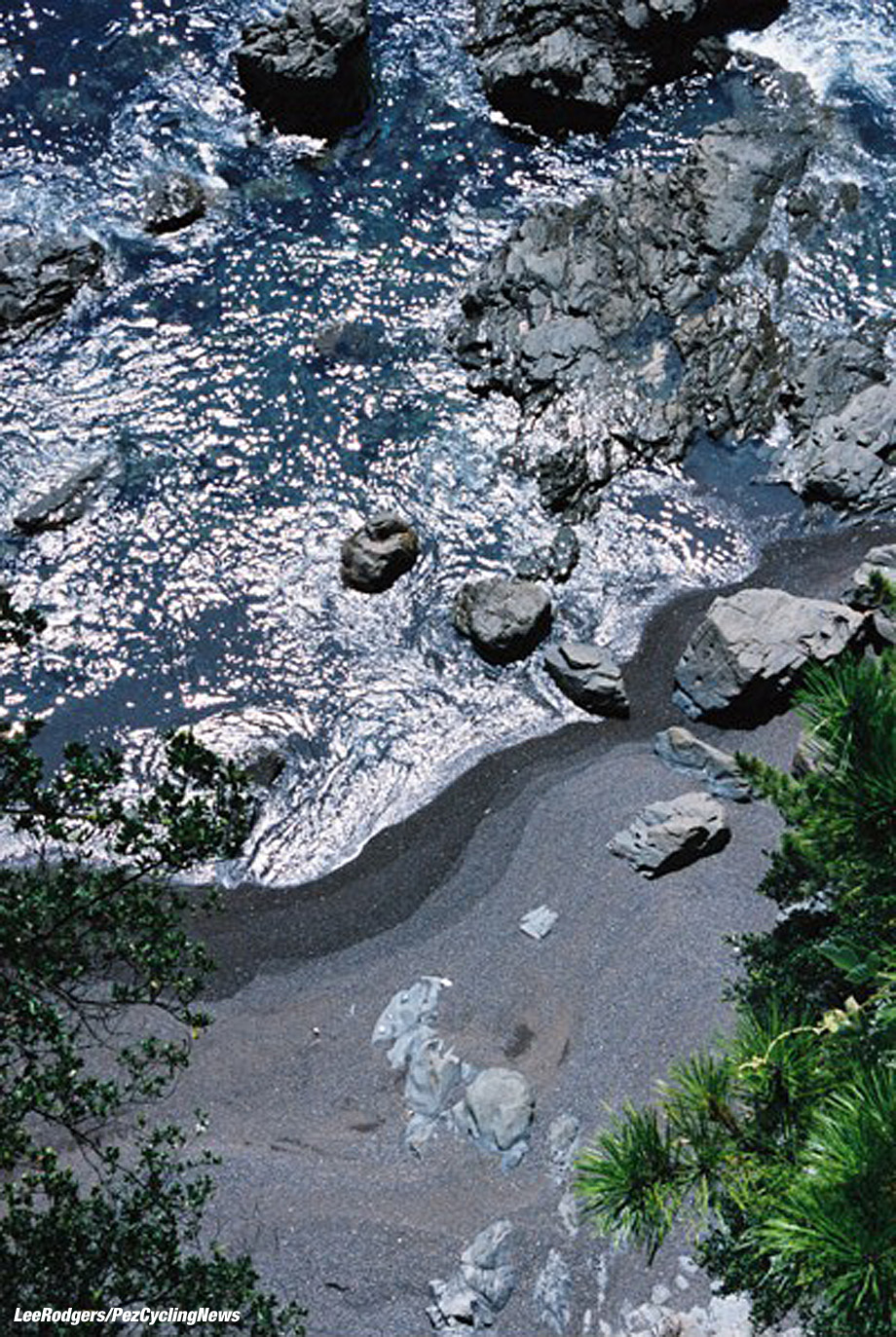 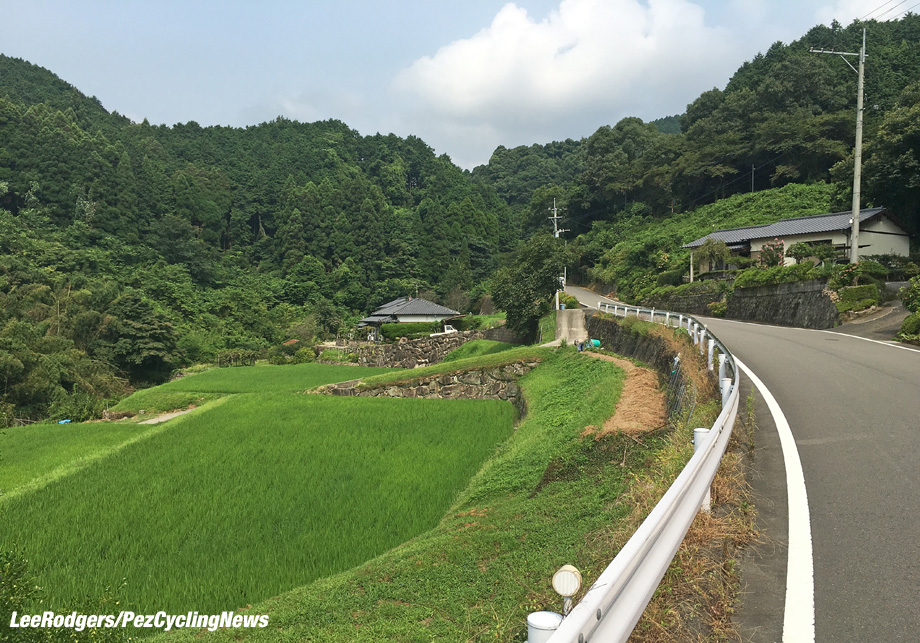 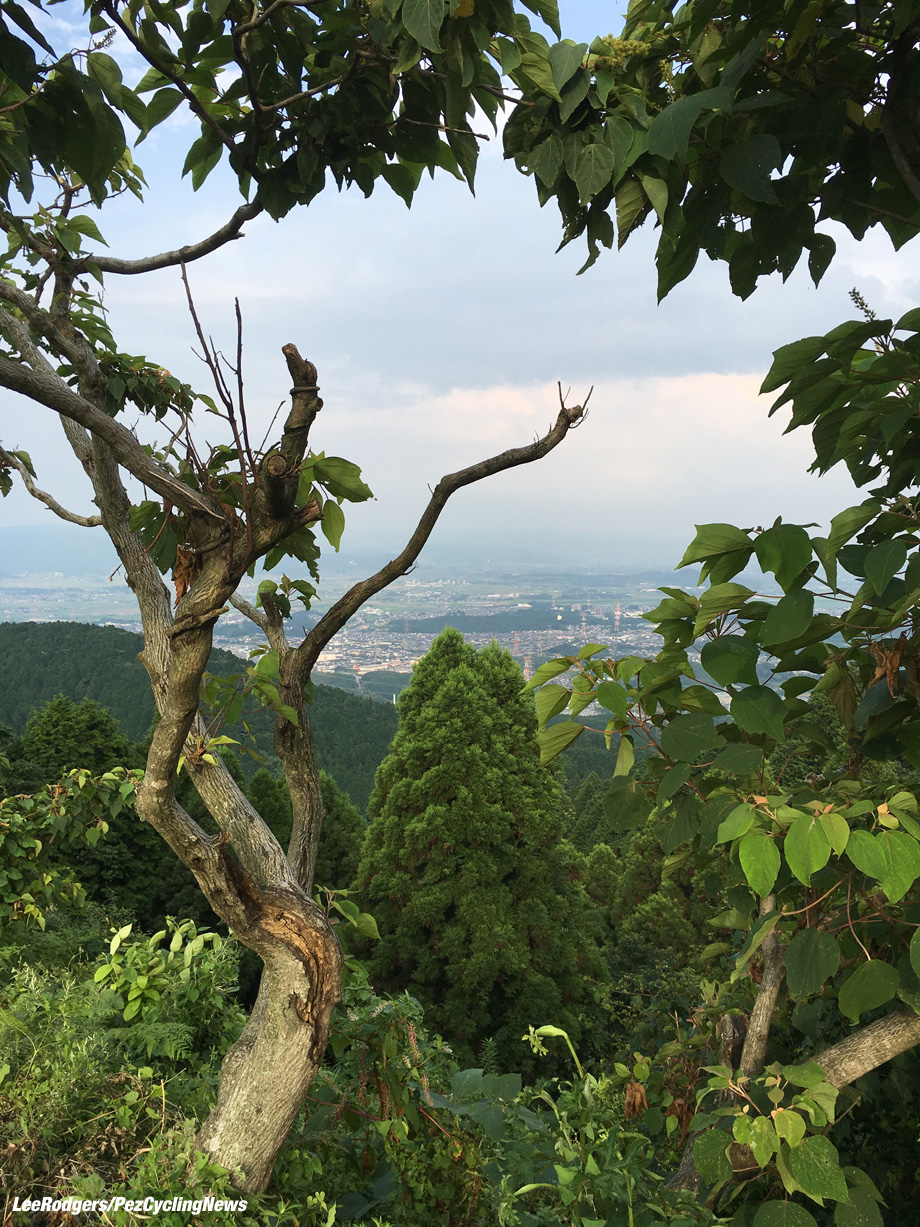 Having taken quite a beating from the hills over a few days I decided to head out to the professional Keirin track in the next town, which opens its track to local riders every Sunday. Keirin is quite a lucrative business in Japan, not just for the Yakuza who run (and often rig) it, but also for the pro riders. They’re ofter to be seen arriving to hang around the place on the weekend, in very expensive-looking Benz’s and massive Toyotas, all kitted up with giant mag wheels and spoilers.

Many of them smoke, and the back room is usually thick with about a foot of acrid smoke clinging to the ceiling. Also in there though is some of the most beautiful track bikes I’ve ever seen. Unfortunately no photos allowed in there so, you’ll have to use your imagination. 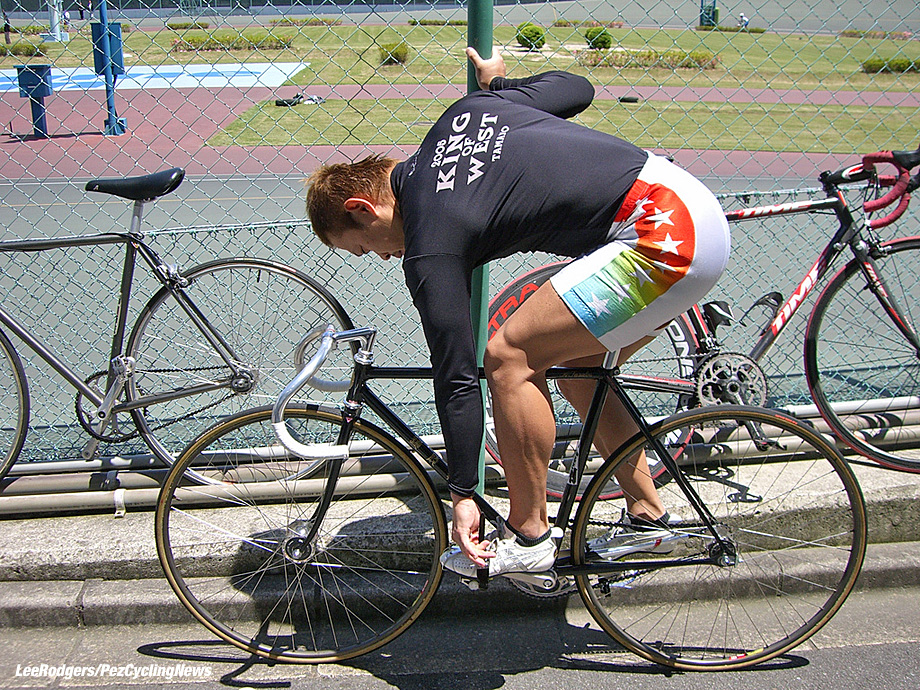 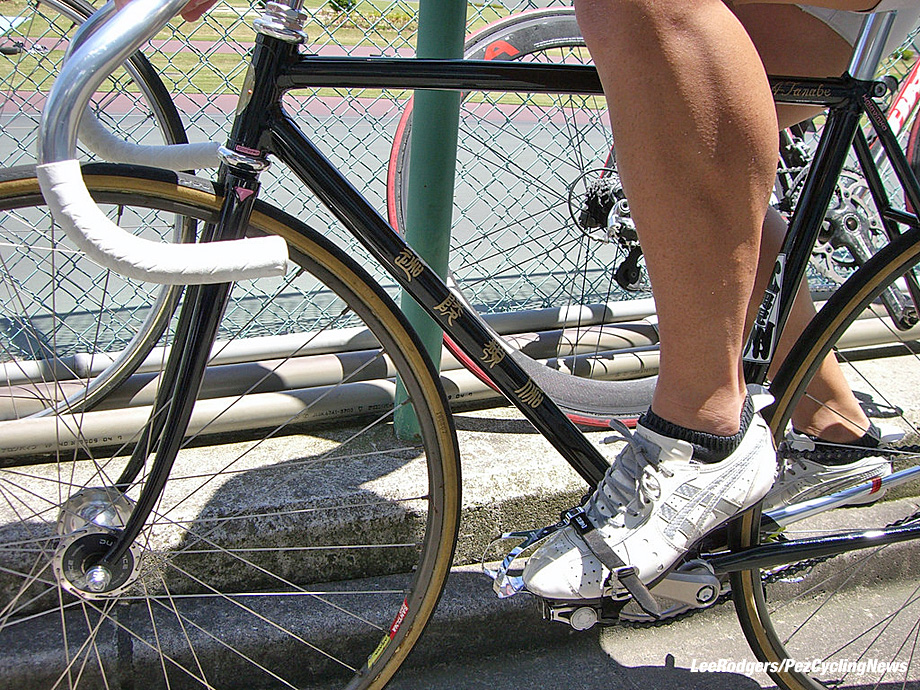 One of the professionals

I once managed to clock a time for one kilometer on this track that would have qualified me for ‘Keirin School’, but when they said I’d have to learn perfect Japanese, become a Japanese citizen and remove all my tattoos (I had 8 already then), I decided against it! Japan had a similar ‘pro-Japanese’ policy in place for Sumo also, and with Keirin there is truly a fear of foreign riders coming in and cleaning up. To offset this, and I guess to keep fan interest up, three foreign riders per year are invited to ride the Keirin circuit. 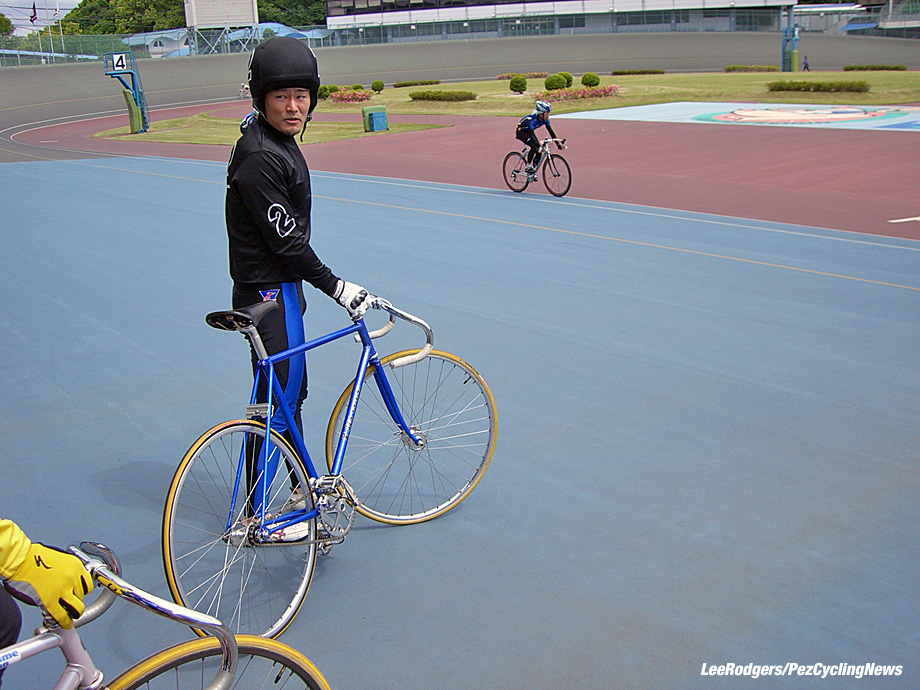 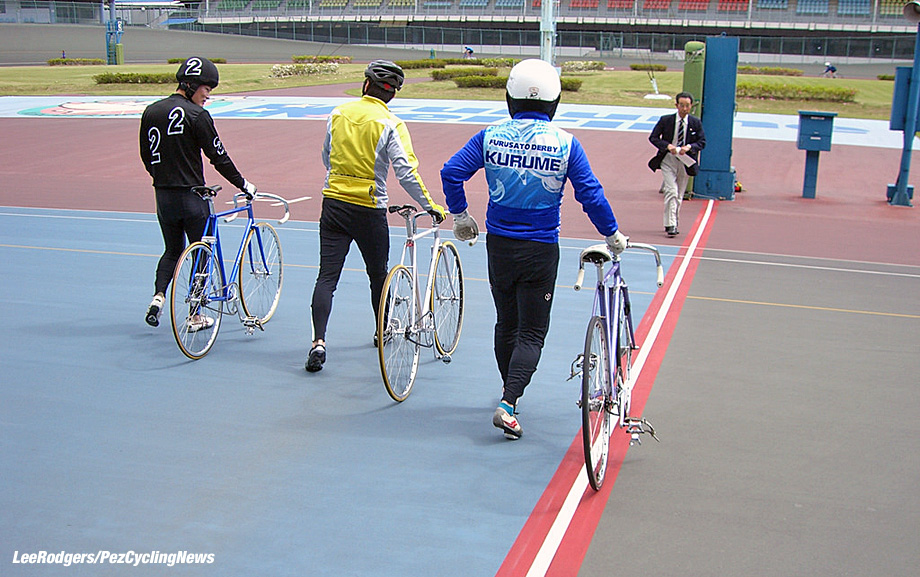 The amateurs get let loose 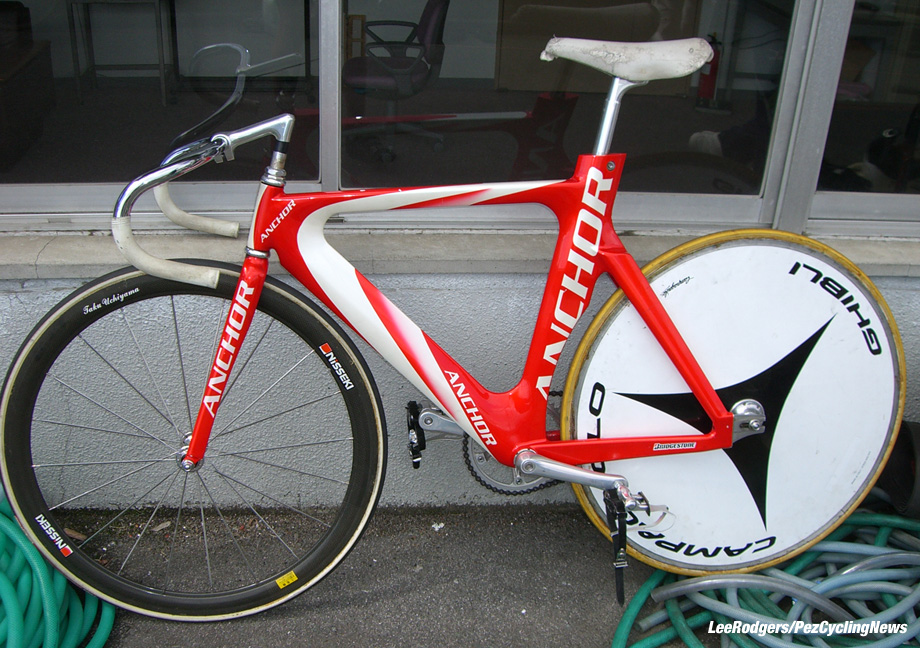 The Keirin bikes must be made from steel, and can only be made by accredited builders. I know of one builder whose frame fell apart in a race, causing a big pile up. His accreditation was immediately revoked and he now provides a trendy fixe brand with their top-end frames.

The rest to the week was filled with more izakayas, more great food and more great riding that just blew me away. Japan is freakishly free of litter, everywhere, and the air is so clean that it almost seems like a mystical light is illuminating the land, it really is quite remarkable. The people are also very friendly to foreigners, almost embarrassingly so when I think of England!

The trip to say goodbye to my old buddy was, in every sense, a very rewarding experience, connecting me once again to a land I truly love.

I can’t recommend riding in Japan enough, from Hokkaido to Okinawa, I’ve ridden and raced over a large part of and it should be on that bucket list! 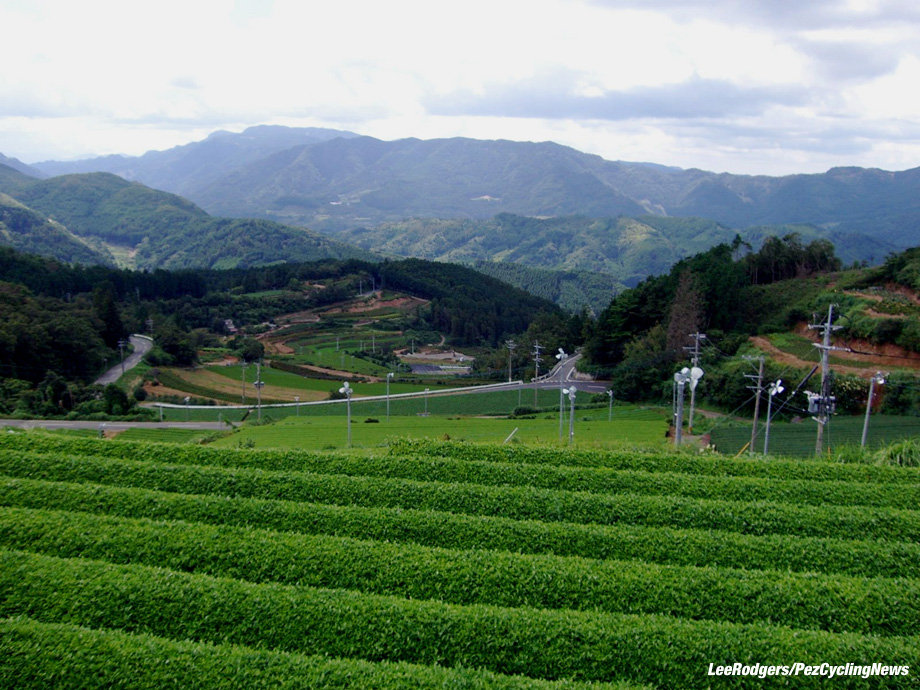 The tea fields above Kurume

Costa Into Second Overall At Utah

Olympic preview with Vekemans and Hoffmann