Lee’s Lowdown: Cycling In The Smog

Today Lee Rodgers looks at a problem close to his heart, or more so his lungs. The pollution levels in the Far East, where he lives, are at an all time high. So, Lee takes us through Chinese transport history and how a bicycle centric country has changed to the most smoggy in the World.

“Ten years ago,” writes John Hilary in his 1997 article on cycling in China, Paradise Lost, “I went to live in heaven: a city of six million cyclists and barely a couple of thousand cars. A city with cycle lanes as wide as Oxford Street and attended bike parks on every other corner. A city where every consumer durable – fridge, washing machine, even three piece suit – was delivered by pedal power, and where whole sidewalks were given over to puncture repair stalls. I rubbed my eyes, bought my second-hand Flying Pigeon and joined the happy throng.”

“Today, that same city [Beijing] is choking on a noxious cocktail of exhaust fumes familiar to urban dwellers the world over. In fact, its streets now have “oxygen bars” where citizens can stop off and rent an oxygen mask for a few minutes to help them on their way. The bikes are still there, but the presence of a million cars, trucks, scooters and taxis has jammed the city and turned them into second-class road users.” 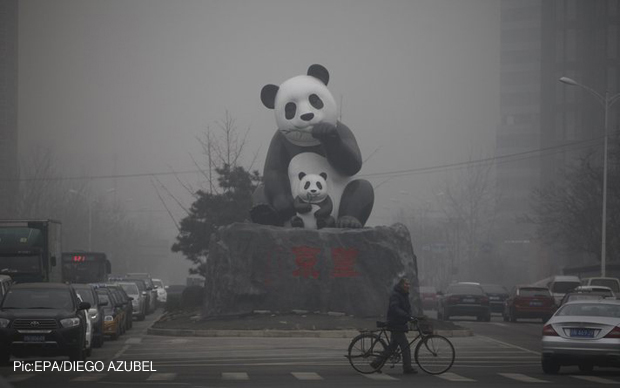 I live in Taiwan and am often in Hong Kong and other parts nearby, and I can tell you that the air pollution Hilary talks about has gotten far, far worse since that time. I’m sure you’ve all seen the images from modern day Beijing of its citizens walking around in a pea-soup fug that is slowly destroying their respiratory system every time they take a breath.

The city I live in is Taichung, the Silicone Valley of the bike world, a city half-ringed by massive mountains that for 95% of the year are all but invisible. The pollution from the mainland travels far and wide and has now become a regional problem. 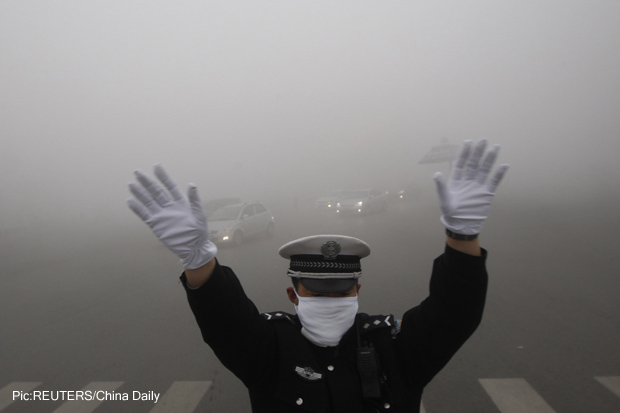 The Earth Policy Institute stated in a 2008 report that, between 1995 and 2005, “China’s bike fleet declined by 35 percent, from 670 million to 435 million, while private car ownership more than doubled, from 4.2 million to 8.9 million. Blaming cyclists for increasing accidents and congestion, some city governments have closed bike lanes. Shanghai even banned bicycles from certain downtown roads in 2004.”

It’s not just happened in China either. In fact, in several Asian nations where cycling was the main and often only form of transport for massive swathes of society until very recently, the car (and scooter) now reigns supreme and, with it, its pollutants.

China for so long was synonymous with the old steel bicycle and images of streets crammed full of thousands of kaki-wearing and black-clad workers on their way to work every morning on streets devoid of cars, that, to the romantic Westerner, it seems incongruous that this massive nation has all but turned its back on the bicycle and is now the major polluter nation in the world (followed by, you guessed it, America). 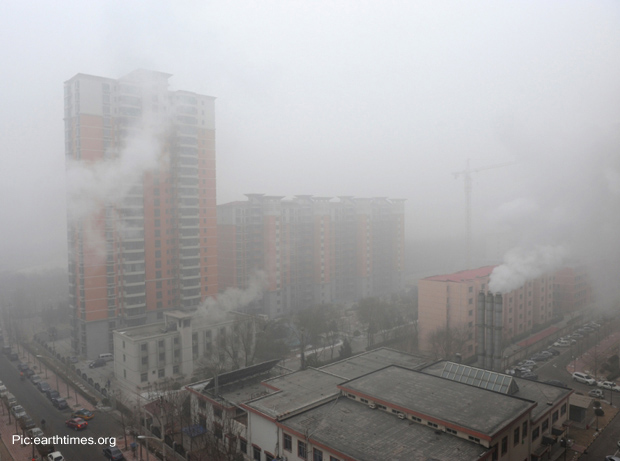 News of the first bicycles (Pierre Michaud’s velocipede) made its way to China as early as 1866, with the return from a diplomatic trip to Europe by an official named Binchun, who had seen a velocipede in Paris.

“On the avenues”, Binchun wrote to a select group of court officials and social elites, “people ride on a vehicle with only two wheels, which is held together by a pipe. They sit above this pipe and push forward with movements of their feet, thus keeping the vehicle moving. There’s yet another kind of construction which is propelled by foot pedaling. They dash along like galloping horses.”

Binchun’s group was in fact sent to Europe with diplomacy as a secondary aim, the first being to take notes on any technological developments that they witnessed. It’s fascinating to consider that the need for technological progress (industrialization, effectively) in China was driven by a series of military defeats, and that his change was not a cultural development growing from historical traditions, as it was in Europe. In fact, it forced the Chinese (and the Japanese also) to question the very validity of their way of life in the face of modernity.

It was this need to become more effective in battle that really first encouraged China to embrace the bicycle, as they saw it had become an effective mode of transportation for soldiers in Europe. 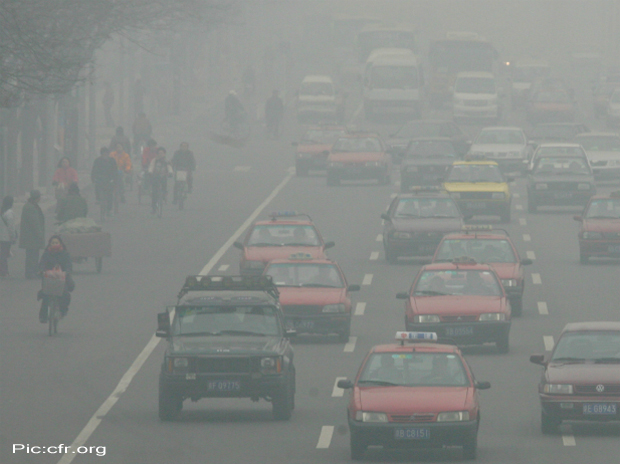 Another influence in exposing Chinese people to the bicycle early on were the foreigners living in the enclaves of Tianjin and Shanghai, some of whom had taken bikes with them. As early as 1868, there were mentions in local newspapers of these lao wai moving about on strange contraptions.

“Westerners ride a small vehicle with great enthusiasm. It is not pushed or pulled forward, but managed by foot-pedaling and is called ‘bicycle’ it can buzz along like the wind, faster than a horse-drawn cart, but only when you have enough practice in using it.”

You can imagine the wonder and excitement that the appearance of William Sachtleben and Thomas Allen Jr. would have been greeted with when they crossed by bicycle into China back in 1891. The young pair had set off on what must have been a truly incredible 18,000 mile journey across three continents that began in 1890. They wrote a book about their travels that was re-published just back in 2003, entitled Across Asia on a Bicycle: The Journey of Two American Students from Constantinople to Peking. 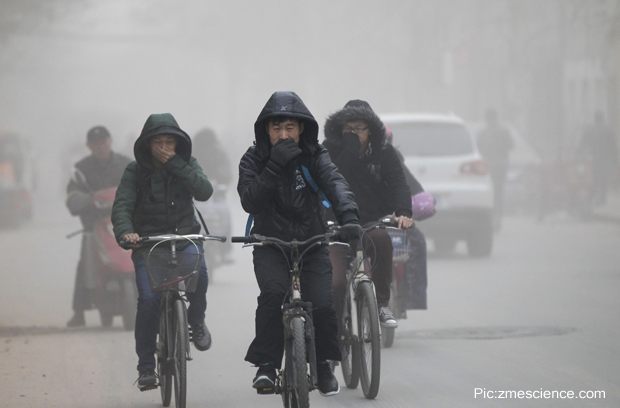 By 1896 the bicycle had become far more commonplace in China, so much so that when the next set of intrepid bike adventurers (the British trio Low, Lunnand, Fraser) rolled into Shanghai having ridden from London, they were met by several hundred local cyclists.

These cycling locals were almost all people who had traveled abroad and brought their bicycles back home with them and so would have been considered a part of the elite. Their cycling passion however set off a chain of events that had quite an impact socially, as the elite in those days were expected to travel by rickshaw. The bicycle became one of the symbols of modernity and of a willingness to adapt to new technologically, and, importantly, to embrace (or at least consider) Western ideas.

However it wasn’t until the 1930s, surprisingly, that China first began to produce bicycles of its own. Until that time, all bikes in China were imported. The impact of bicycles on the large cities of the west and south of China may have been growing stronger and stronger since the early 1900s, but further inland the encroachment of the bike was much slower. 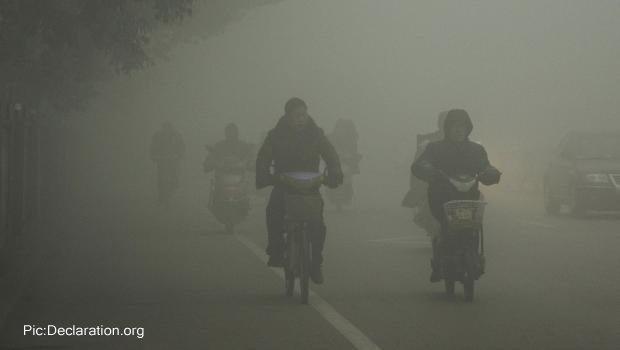 The real boost to bikes in China though came in the form of Chairman Mao and the establishment of the Peoples Republic of China in 1949. Motivated by a number of factors – the lack of highways and other transport infrastructure, an economy still in disarray from the effects of war (both the World War and civil), and also by the need to get people moving and to work – the bicycle factories and small producers were pushed together to form a larger industry, culminating in a growth of over 55% within a few years.

The first ‘Flying Pigeon’ bicycle brand rolled out of the factory in 1950, designed on an English Raleigh bike by a factory worker, Huo Baoji. With bike lanes being built in most major cities to facilitate the push to get people mobile, the bicycle became a component of every right thinking Chinese person’s wish list.

This was known as sanshengyixiang, or “three rounds and sound” — a wristwatch, a bicycle, a sewing machine and a radio. Own these items and you were not only a good Communist, you were also thrillingly modern.

The Flying Pigeon marched on through the 1960s and 1970s, its logo becoming standard on almost every bike of its kind produced in China, to the point that Huo Baoji’s creation became the single most popular mechanized vehicle on the planet ever. 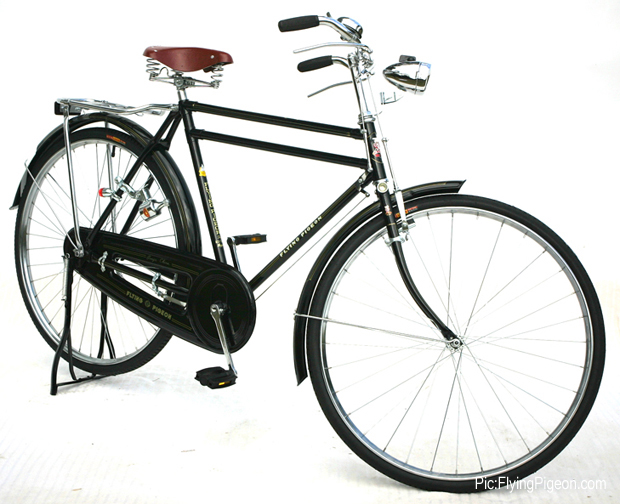 In 1986 the Flying Pigeon sold to 3 million buyers.

What happened next is known to all. China began to change, politically, economically, industrially and socially. Indeed, that change brought about a desire to embrace a vision of a future that in many ways perceived the old ways as backwards. It is ironic perhaps, that a Western invention had come to symbolize the traditions of a nation that hadn’t produced its first bicycle until the 1930s.

Yet the young and the rich, buoyed by their new freedoms (one of the most important being the choice of what to buy) were developing a taste for shopping that saw a huge boom in car sales. That huge increase of drivers on the road contributed to the worsening pollution that is now almost totally out of control, making some parts of China dangerous to ride in. 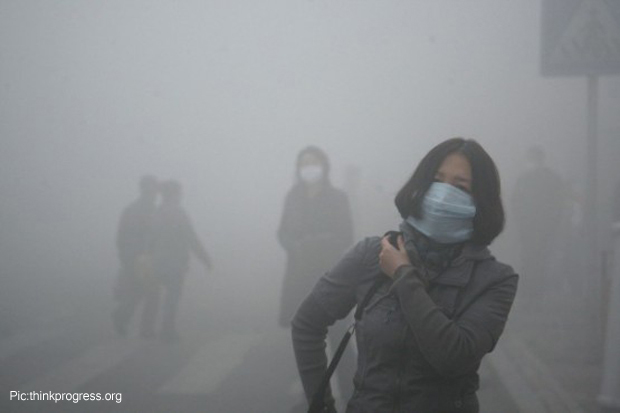 In recent years though there has been a noted increase in the number of people turning back to cycling, not as a vehicle to get to them to the coal mines but as a form of exercise. Sales of high-end road bikes in particular are increasing in major cities annually, and mountain biking is becoming increasingly popular also. There’s also a developing local racing scene that is attracting more adherents year by year, a trend given a real boost by Giant-Shimano’s Ji Cheng’s ride in the Tour de France last year.

Urban schemes to get people pedaling seem to be having an effect also, with Hangzhou, a port city 100 miles from Shanghai, having 60,000 share-bikes on its roads, the most by any city in the world. They are aiming to increase that too, with the goal of 175,000 bikes out there by 2020 being set. Beijing has also joined the trend and now has its own bike-share system.

Beijing also recently partnered with Copenhagen, hoping to learn from a bike-friendly city that until a few years ago itself was car-dominated in the hope of clearing some of that smog from its skies.

However, the car is still king, make no doubt about that. It’s also obvious that ‘people-power’ in China has had little effect so far on the industrial nightmare that is the air that people breathe. The government let it get that bad because they knew they could, with the desire to overtake America as the world’s largest economy taking precedence over people’s health.

Can pedal power bring back the blue skies? It’s a long shot, but it might be the only thing that could. 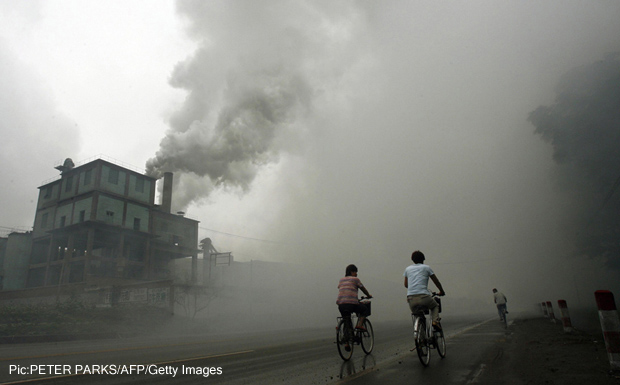 Lee Rodgers leads a double life as a pro racer on the UCI race circuit with the Lapierre Asia Cycling Team, competing in the UCI Asia Tour as well as some European events and the likes of the Tour of Qatar and Oman, rubbing shoulders with the best the WorldTour has to offer, whilst keeping up a day job as a cycling journalist. The highlight of his cycling career so far was winning the Singapore National Champs – road race and ITT – as well as claiming the Green Jersey at the 2.1 Tour de Taiwan in 2012, and naturally, writing for PEZ. His writing appears in several magazines and websites and you can catch up with him regularly on his blog, https://crankpunk.com/

Lazer and Lotto Soudal support ‘Be Safe Be Seen’ campaign