Lee Rodgers takes us into his desert dreams as ‘The World’s Oldest Neo-Pro on his Arabian Adventure’. With the top riders of the WorldTour currently racing in the Tour of Qatar, Lee recalls his own adventures, rubbing shoulders with the stars, in the Arab races (Qatar & Oman) back in 2012.

You see them, the little white dots in the distance, bobbing about through the shimmering heat, the only things alive on a horizon of deep ochre red, swathes of it under hard hot blue that make the whole experience like being in a Rothko painting. This is the desert, the proper desert, the Arabian one where camels groove along through trails in the sand, unseen and unknown by anyone who is neither a dromedary nor a nomad, where buzzards really do hover above waiting for the weak to drift from the pack and where the winds whip up into such a frenzy that the world’s hardest peloton gets ripped to shreds on a daily basis.

Surreal is not enough of a word to describe it.

As you get closer the little white dots become elongated, then smaller black dots appear atop them, then you can make out different sizes amongst the throng, then the hands and the instruments being played and the rectangular black objects some hold, then the fabric of their robes, and suddenly you’ve flown by with their desert melodies and their undulating hollerings in your ears that then burrow into memory. 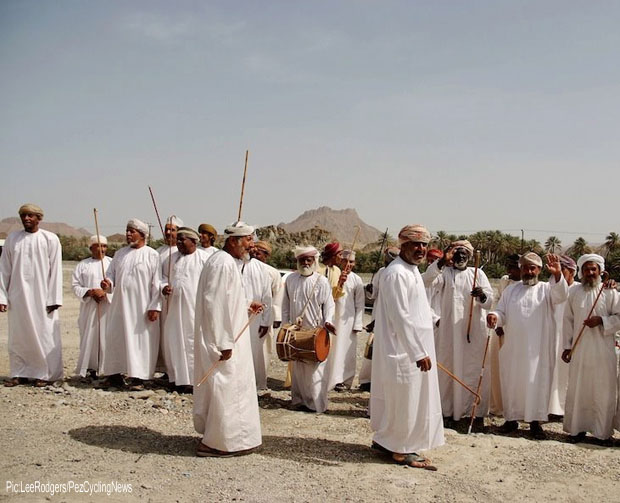 The first time you see the local men come to cheer on and serenade the Pro Tour peloton, you wonder where they came from, because as far as the eye can see there are no structures, and no parked vehicles. It’s as if they came out of the desert and will return there too. 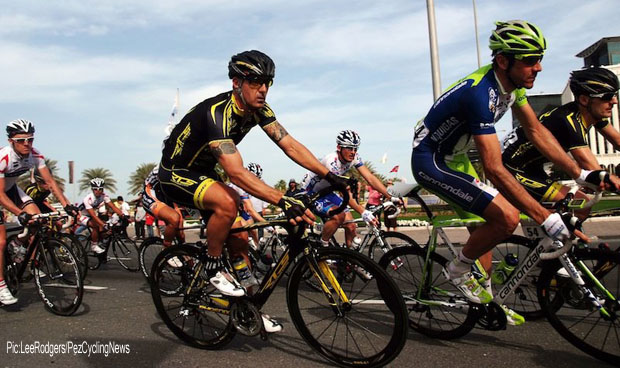 I got a call from one of Asia’s top teams in December, the 22nd in fact, asking me if I wanted to join the team and was I interested in racing in the Tours of Qatar and Oman. I said yes, calmly as I could, then put the phone down and danced around the living room for thirty minutes. I was 39 years old, and about to go race with the big fellas. Two days later I was hit by a car whilst out training, breaking my hand. This was exactly 40 days before the Tour of Qatar began.

I couldn’t tell the team management as they’d pull me from the races, so when they called telling me to attend a training camp over New Year I told them my Auntie Rose had died (Rose never actually existed but she was my favorite Auntie!) and that I had to go back to the UK. But that yes; I would take my bike and that yes; I would be out on it all day.

In actual fact I was unable to ride on the road, so I took my indoor trainer to the roof of my apartment building, a necessity as the woman downstairs complained about the noise all the time, and set the bike up with a cushion duct taped to the bars. I rode in fear up there because when I got the call to join the team I was in hibernation mode, thinking my season would be starting, as usual, in March with some short local races.

Over the next 21 days I put in 70 hours on that godforsaken rooftop in an attempt to get strong enough to withstand the trials I knew awaited me in that desert. It was a three-week version of hell that Dante forgot to mention, but trust me, it exists. There was a huge feeling of just being scared. I was scared at the thought of the wind, of the quality in the field, and of getting a DNF. I knew, with my 40th coming in May, that I wouldn’t be getting a call to ride Roubaix or Flanders, or even San Sebastian. Nope, this would be it. The one and only. Twelve days of looking the beast in the eye, twelve days of suffering, twelve days to see what I was made of.

We arrived to the sight of a car park full of huge tents that were filled with hundreds of thousands of dollars worth of the best road racing bikes money can buy, attended by the world’s top mechanics with the world’s top riders loitering nearby. Some adjusted saddles, some fooled around, some looked serious, others relaxed. 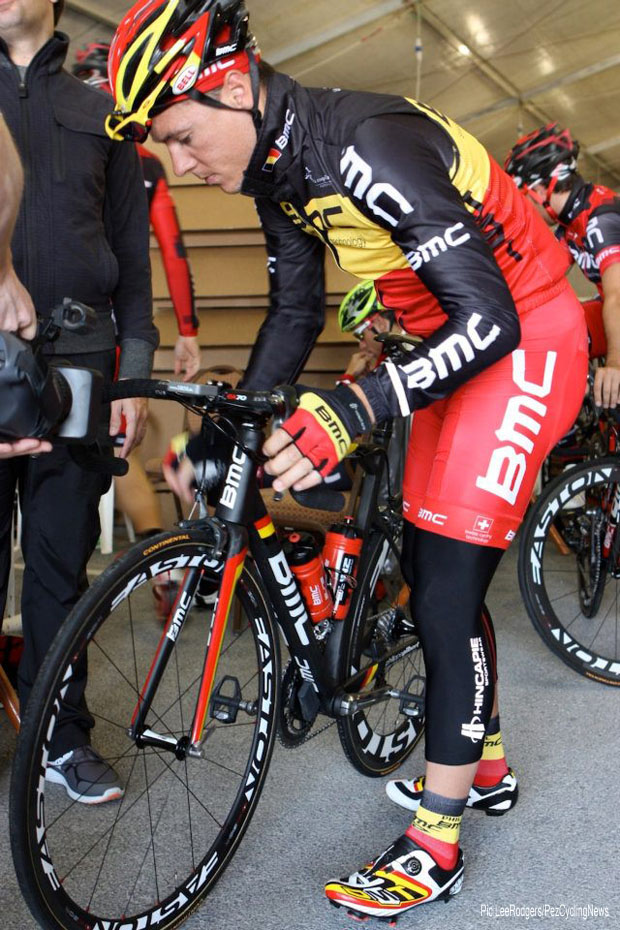 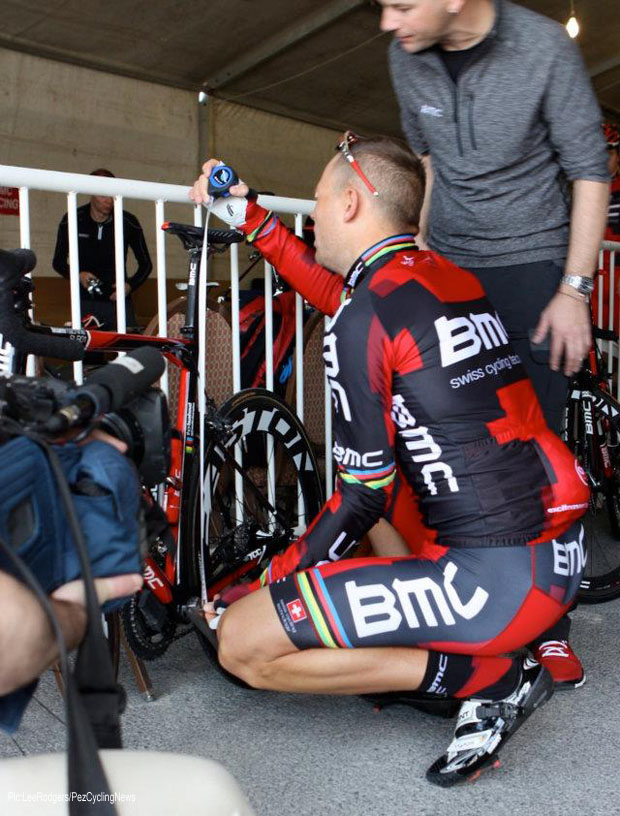 But us? My little team?

Other than our leader David McCann, who had raced Worlds and the Olympics, we all looked petrified. Mark Cavendish and Bernie Eisel walked past, I muttered a ‘hello’ then heard Cavendish ask Eisel “Who the fook are they?” 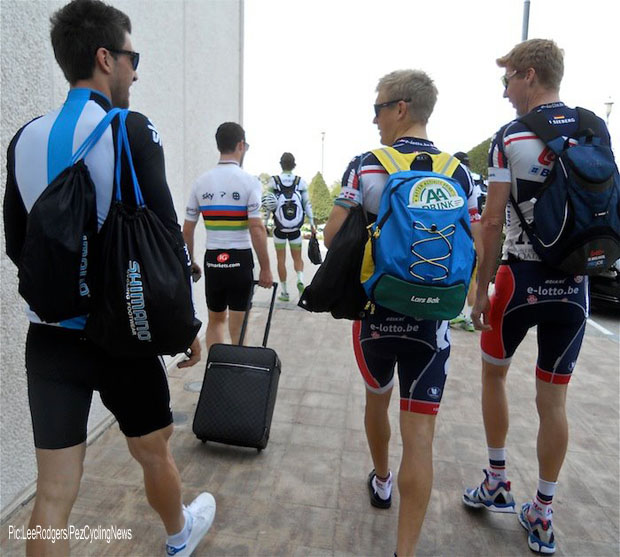 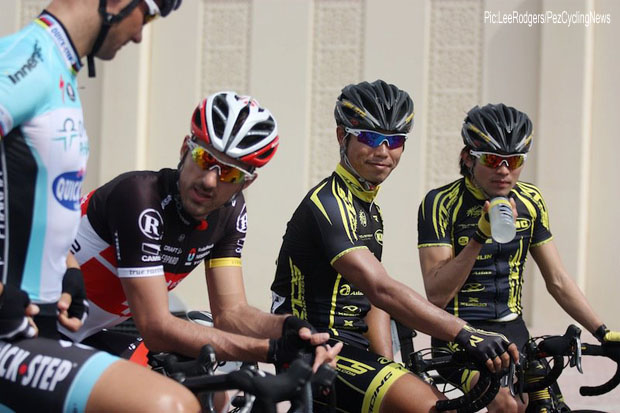 On the first day of racing I remember waking up feeling scared again. We’d been watching flags and tent tops and anything else that would indicate wind power since we’d arrived, but it was calm every day. We’d heard the horror stories of the crosswinds and the echelons, of guys coming in 30 minutes down on the leaders, of grown men being shredded off the back within 5 kilometers of the start.

That first day though there was zero wind. This fact, however, did not stop the speed increasing into the first 90 degree right up to about 70km/hr, helped on by a little tailwind. The power unleashed in the run-in to that corner absolutely had me in awe. I was at the back barely holding on as we made the turn into it, and then the fight to get back on was biblical, no joke – and there wasn’t even a crosswind!

After about three days of this and knowing that I was suffering from whiplash after each corner, I decided to try to move up near the front into the first corner. Knowing we were three kilometers from the turn I barreled it down the outside, then pushed and jostled as way too many guys shouted at me just because we (anyone from my team) ‘weren’t supposed to be there’, and boom, suddenly I was four off the front! Amazing!

Lee’s staring role off the front of a WorldTour peloton:

And then they swarmed. Within a fraction of a second I had two guys either side of me, then 4 then 8, multiplying like Jehovah’s Witnesses. I saw both sets of knuckles jammed into buttock cheeks either side of me, we were that tightly packed in. I panicked, feathered the brakes and before you could say ‘biological passport’ I was back at the back. Where I always was, and kinda, I guess, where I belonged.

The thing I remember most from my Arabian adventure was the bike handling skill these guys possess. You can talk all day long about illegal practices and guys getting into the pro peloton who might be ‘assisted’ but make no mistake, you can’t be there unless you can handle a bike. The most impressive I saw was Peter Sagan. Muscular yet fluid, he was like a barracuda in a shoal of parrot fish, right in front of you one-second then five guys ahead the next.

We had one day of wind and it kicked my arse I can tell you, but then it kicked many. It was incredible to be in there, with the sand blasting the top layer off your skin, and the whole pack in tatters, all over the road. 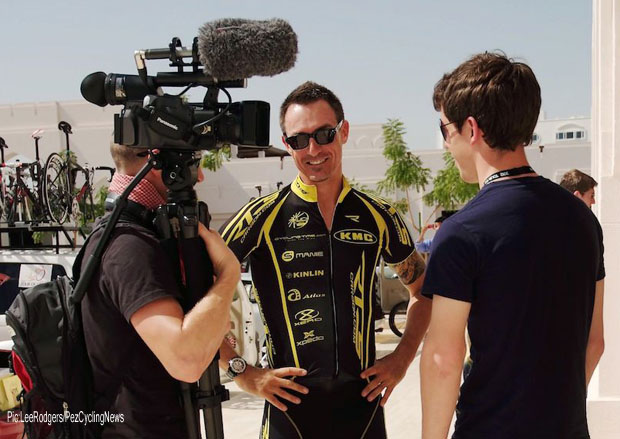 The British Eurosport commentator came up to our table on the last day in Oman. He said “Who’s Lee Rodgers?”

“Never heard of you. Tell me your story.”

So I did. He laughed a bit at the ridiculousness of it all. Then he said “Hey, today the TV cameras come on with 40 to go. If you’re visible I’ll give you a mention.” At dinner that night he came up to our table again. “Hey that was uncanny! I’d just sat down in front of the mic, we went live and bang, there you were attacking the peloton! It was brilliant!”

Must have been lucky I guess… or perfect timing! 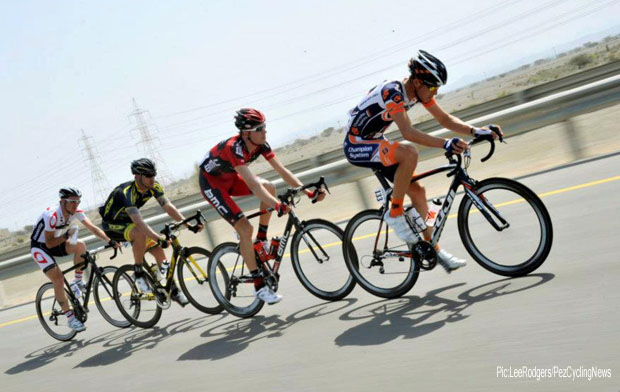 Lee Rodgers is a former professional road racer on the UCI Asia Tour circuit now racing MTB professionally around the world. His day job combines freelance journalism, coaching cyclists, event organizing and consulting work. You can keep up with his daily scribblings over at www.crankpunk.com. And he came 105th in the 2012 Tour of Qatar and 87th in the Tour of Oman!