Lee’s Lowdown: How To Lose A Classic!

This week Lee Rodgers runs his eye over the debacle of Saturday’s Omloop Het Nieuwsblad. The Etixx – Quick-Step team had the upper hand; three riders versus the solo Ian Stannard and what happened… Stannard won. Here is the ‘Lowdown’ on the in’s and the out’s, the excuses and where it all went wrong.

Tom Boonen, Stijn Vandenbergh and Niki Terpstra emerged from the darkness with trickles of blood coming from their ears, bodies battered, bruised and thoroughly spanked. Never in their lives had they taken such a thorough pounding. This was not from the race, if that’s what you’re thinking, but from ten minutes with Patrick Lefevre on the team bus after their disastrous run out at Omloop Het Nieuwsblad.

“So we are pretty confident in our abilities to be a protagonist,” Wilfried Peeters, EQS DS, said before the race on Saturday when he could naturally be pretty confident, as he figured he had some of the canniest, fittest and toughest Classics riders of their generation under his tutelage and raring to go. “The last time we won this race was 10 years ago with Nick Nuyens,” he continued, his little nose twitching with the scent of victory he sensed on the wind, “but the finish was still in Lokeren. Tom Boonen was second that day. Now we hope after 10 years that we can do a good race and try to get a win.” He might be calling himself WellFried Peeters after Saturday, so frazzled would he have been in the team car at the end. 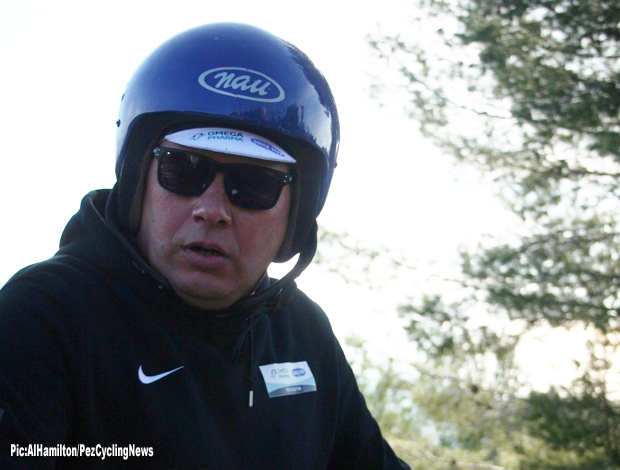 Even more humorous than the events on the road were the comments by Patrick Lefevre after the race, when he had the gall to blame eventual winner Ian Stannard of having the temerity to sit on the wheel when he was in a 4-man break with three riders from the same team. “It hurts, that’s true!” he bellowed, having just mistaken a large cactus for a stool at the bar. “I can’t blame the team for anything. I’m proud we added colour to the race. We’re ready but it’s very hard to win. With Stannard on the wheels for thirty kilometres everybody was getting nervous. Maybe they made a couple of mistakes but we decided the race. We excelled as a team.”

I can see the headlines now, ‘LEFEVRE FOR SAINTHOOD,’ because you’d have to be one to forgive that calamity of a race finale by his boys. Mother Theresa has nothing on old Pat. Hard to win? With three strong riders like Tom, Stijn and Terpstra? Added colour? What colour is 2nd, 3rd and 4th these days? Pastel shades of lilac, teal and puce? Not quite as invigorating a colour as the glowing hellfire red of Stannard’s win, are they? 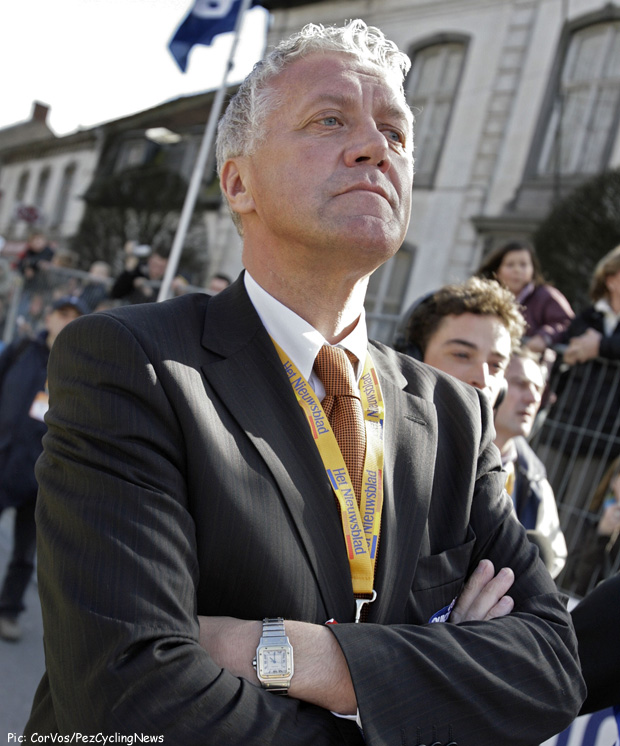 Speaking to Sporza, he then laid it on even thicker, calling out Stannard for a soft ride. “Stannard did what he had to do [yes, he won]. Then again, I think that a rider from his calibre from that team should share the work until the gap was 40 seconds [with any different three riders from any other team in the world maybe, but with those lads? No chance]. He played it hard [meaning ‘smart’] but tomorrow or next week it’s another race, then we can play that game. Stannard was team leader today. A team leader that was on the wheels for 40 kilometres [yes, very smart]. A rider of his level, a team leader, doesn’t stay on the wheels for 40 kilometres [except he did, and he won].”

“For us it wasn’t possible to play poker. There were three men at 20 seconds then you have to keep riding.” Yet it was exactly a game of poker and Stannard played it like Cool Hand Luke, he saw Boonen’s 20 hard boiled eggs and upped him 30 with no reply. Boonen had the trolley ready for the silverware but he was all lost in the supermarket. “Hello shoppers, if anyone finds The Plot, can they please bring it to the manager’s office, we have a Tom Boonen here and he says he’s lost it.”

What should have happened is this: Terpstra attacks, Stannard counters, then Vandenbergh attacks and if he doesn’t get away Terpstra goes again. If Nikki fails then they can either keep it going at a clip it to the line and Boonen hammers it, or Boonen could have had a dig at Stannard after Terpstra’s last attack as the Sky man would have been tuckered out by then. 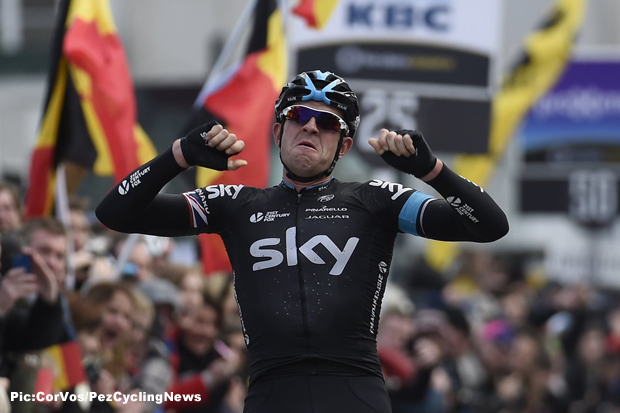 That Stannard poker-face cracked at the finish line

Take nothing away from Stannard, he rode an absolutely perfect race, being at the front exactly when it mattered – to chase down the first attack and then the last, with his nose in front just 10 meters from the line. He didn’t even have to chase Terpstra’s attack as Vandenbergh did the chasing for him.

Lefevre said something about Vandenbergh not actually having chased down his own teammate but that he in fact didn’t know it was an attack, then had to go off to take several calls from the Belgian political parties – they had noted his ability to craft a tale of such utter implausibility whilst keeping straight face and now all to offer him a job as their spokesperson. 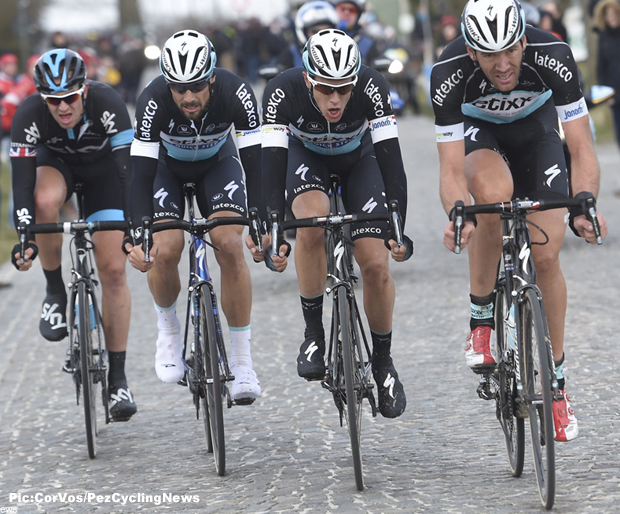 Boonen: “We should have waited”

Boonen put it all down to a mistake, saying that “we should have waited”, but waited for what? For a time machine to take him back to when he had the confidence to take on just about anyone in the world in a sprint? What was he doing in the front of the break for so very long anyway? Why not just back off earlier and let the other two work it? They’re big lads and could have taken the strain from further out. No, it was a weird one that, and brilliant to watch, as unexpected a win for Stannard as you’re likely to see. Again, he is strong and take nothing away from him, he is one cool cucumber, but EQS should have had a double last weekend.

Rumour from the peloton is that Stannard’s win was cheered by many. Sky aren’t exactly the most popular team out there but maybe EQS get a little too swaggery around this time of year for some.

The last 20K’s of the Omloop Het Nieuwsblad

As for Kuurne-Brussel-Kuurne, that was interesting wasn’t it? Well, the sprint was. Well done to Cavendish for papering over his team’s poor lead-out and bad marks for Sky for the most pointless waste of watts in a finale that I’ve seen in many a year.

This week we have the Great White Hope, the Strade Bianche. Looking forward to this one, it’s the gatecrasher to the wedding that almost steals the bride, it’s that good. Traditional classics put their time in before they become epic, Strade Bianche on the other hand took the express lane to classicness. Kwiatkowski won it last year, this year I’d say Sep Vanmarcke looks really good and he seems to be getting over the hills well, but this one suits the strong men who love those hills more, so Sagan and the Pole again look good. Gilbert looked like his attack at KBK was for training more than anything and seems a bit off his best yet.

Stay tuned for the Lowdown on the Strade Bianche next week.