This week Lee Rodgers has more controversy to have a go at than you can shake a very sh*tty stick at. The UCI, Brian Cookson, bike doping, dodgy team managers, questionable team owners and… yes, that man Lance Armstrong creeps into the headlines yet again. Where to start? Lee goes for ‘Public Enemy No.1’ as a starting point, what’s new Mr. Armstrong.

Right, sleeves rolled up for this one as we have lots to cover, there’s a veritable smorgasbord of mangled wreckage from the high-speed pile ups that have been gleefully reported in the cycling press to pick over this week. Seriously, if ever there was a couple of weeks that show just how mired in the gutter this sport really is and how impossible it is to ‘move on’ without getting blindsided by a media moto of mind-boggling heftiness, this has been it. 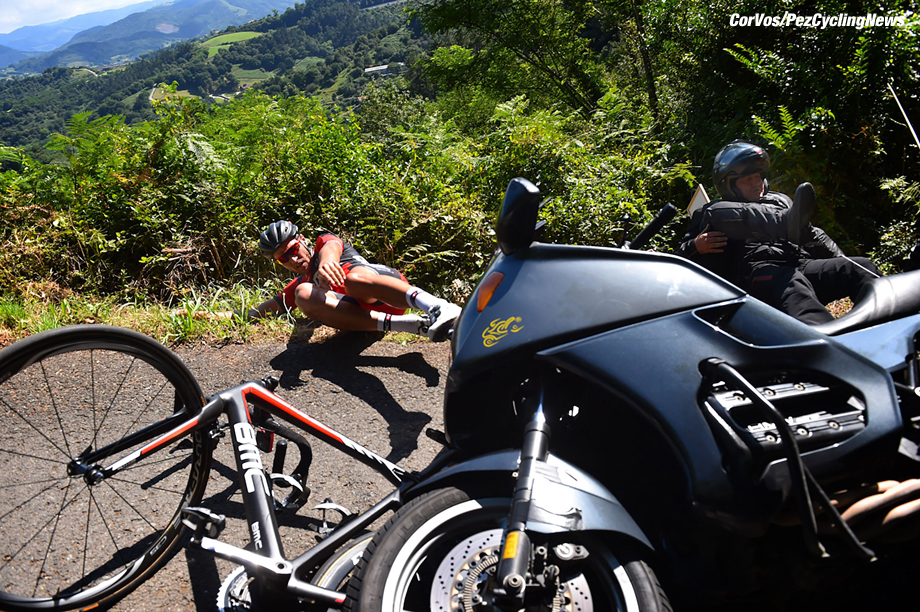 Don’t get blindsided by a moto

Like a rotund schoolboy left alone in a candy shop, I’m not quite sure where to start. That being the case I shall fall back on the pantomime villain of professional cycling and start with everyone’s favorite former golden boy (who might soon not have two copper cents to rub together), Lance Armstrong.

‘Not again!’ I hear you cry, that is, if you got this far before hurling your laptop out the window in disgust, but yes, again. Mr. Armstrong popped up this week in the Denver Post and is shown riding with some “confidantes with the phrase, “WEDU” emblazoned across the back as a small film crew followed him along the route. He has been coy so far on what his plans are for the venture, declining to speak more specifically on the record. A simple splash page for e-mail updates simply reads: “Solidarity for the Solitary.” 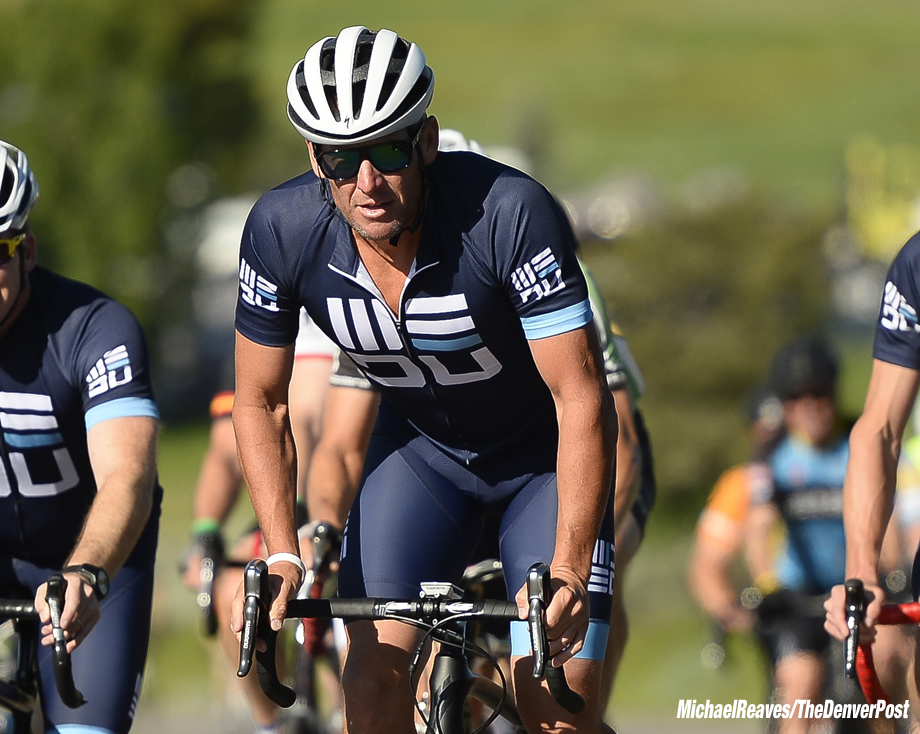 Lance on the Rocky Road

Which, I mean, well, where’s the Irony Police when you need them? Anyway, the reason Ye Olde LA caught my attention this week is not just for his new venture, but for what he told the Denver Post about his doping past – it was quite revelatory and kind of blew the old adage that says pros don’t think they are cheating till they get caught out of the water – cos LA will never regret doping. For him it was the person he is that was the bad thing, as he explained.

Less than nice, on occasion

And therein is a truth I agree with, that LA was appointed because of the way he did things rather than what he did, and I think that yes, he was hung out to dry alone when in fact very single rider that ever used EPO or HGH should also be banned for life. That we are still getting positives for big juice and that people are still able to return to the head table to resume their careers as if nothing had ever happened should tell you that it’s still business as usual. 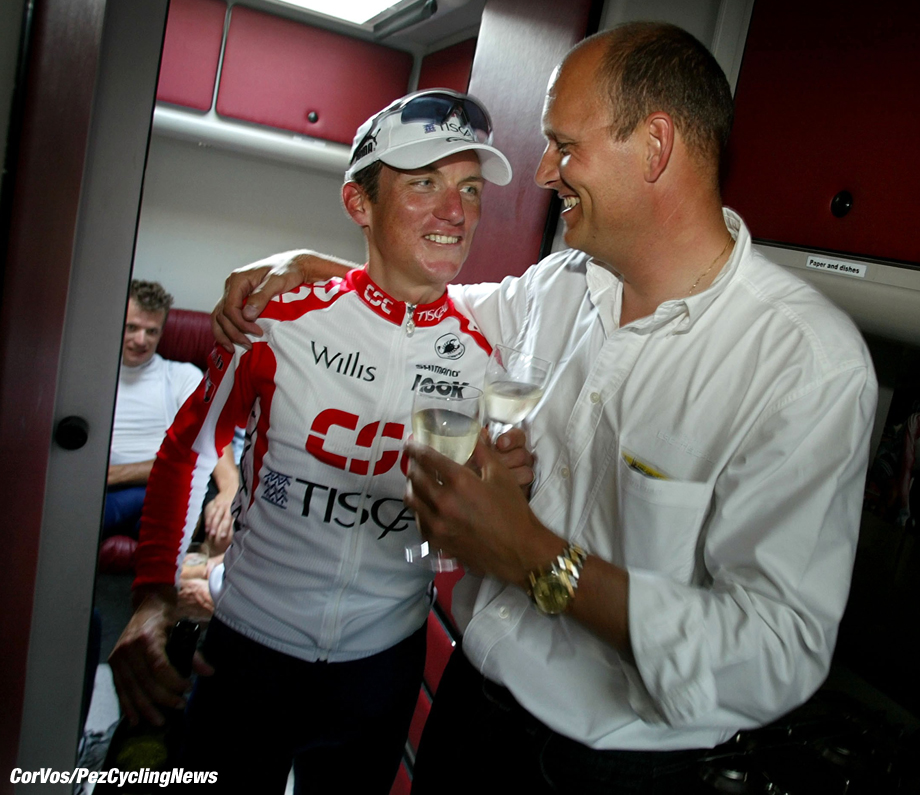 Speaking of banned for life, you may know my opinion about former dopers moving into management of cycling teams and into coaching roles, which is that this should never be allowed to happen. What always amazes and slightly sickens me is how often the cycling press give free passes to guys who doped not only themselves but who are alleged to have doped their riders as managers. 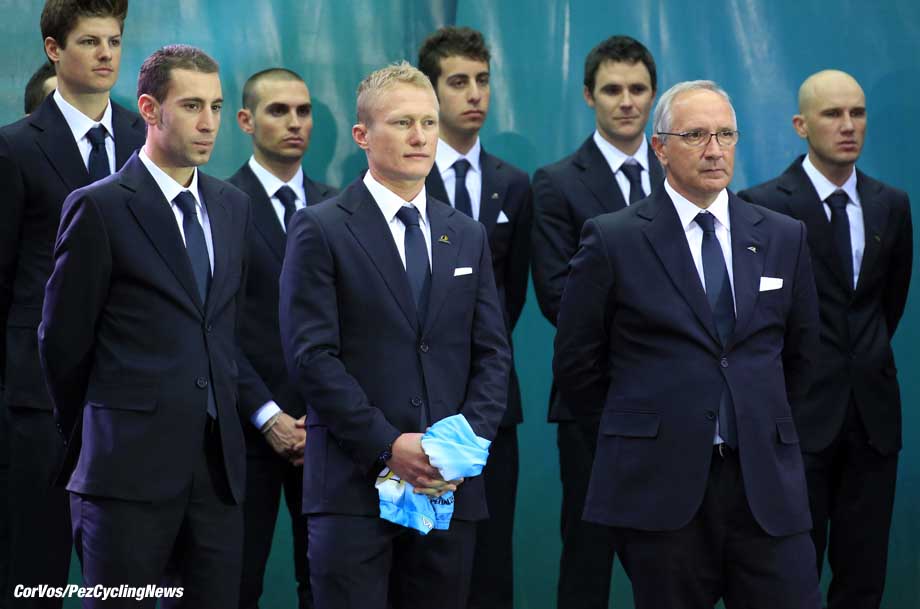 The odd few, like Bjarne Riis, are considered fair game by the cycling press because they are on the fringes of the sport now, yet many others with a dodgy past are ignored, such as Guiseppe Martinelli, who works still for Astana despite having also worked with a veritable Who’s Who of Italian dopers in his career, from Pantani to Simoni to Garzelli, not to mention being on a team that has the brass balls to have three riders popped in a 12 month period and still say they have no doping problem. 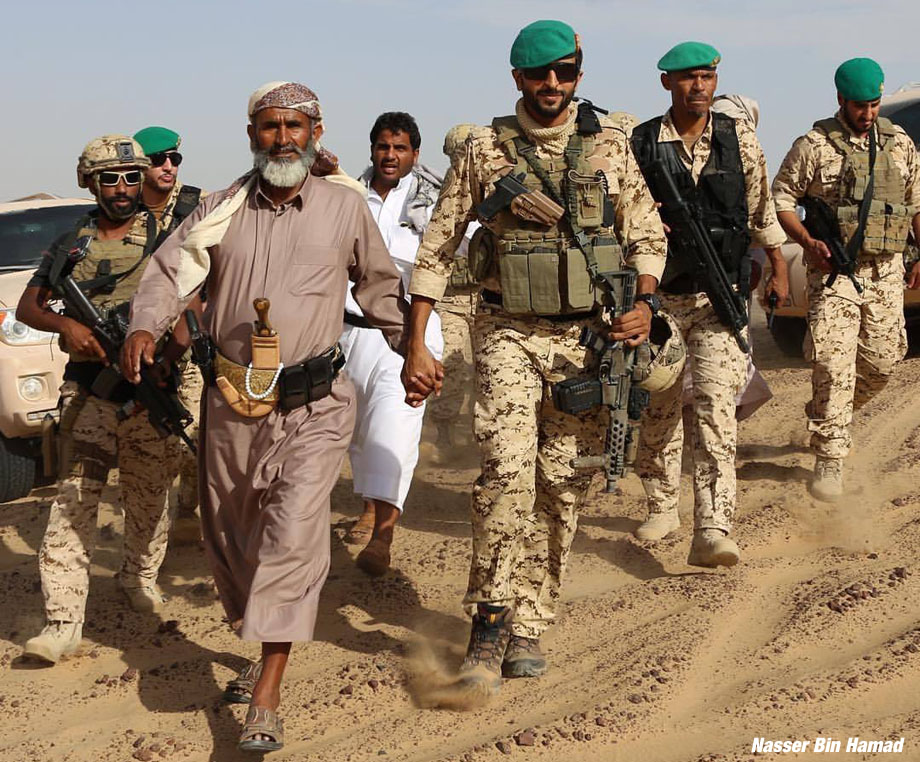 Nasser Bin Hamad in the desert

So when I read the kerfuffle that rightly has accompanied the news that Sheikh Nasser is the cash heifer behind the team rumored to be coming out of Dubai, it was with a wry smile. I mean, yeah, I get it, he’s alleged to have been involved in humans right abuses and Martinelli et al are a tad removed from all that, but the way the cycling press amass to attack with such indignation the straggling wildebeest (who might just be guilty of torture) as the sun goes down on the Savannah whilst just about across the board never tackling the issue of dopers running the sport, it all seems a tad hypocritical to me. Would it be too scandalous to suggest that some established writers and websites willfully ignore the depth of the doping problem that still exists, the one inherited from the ‘EPO days’ that they willfully ignored then too, and instead seize upon the Armstrongs, Riccos and Nassers of this world with such venom merely to assuage their consciences? 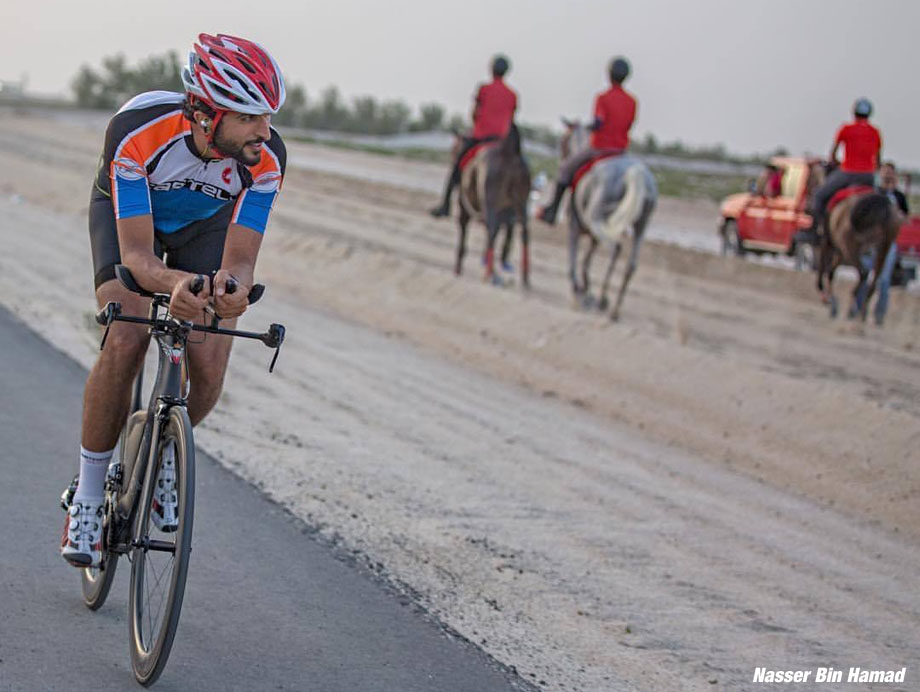 Yes, Nasser should be barred from working with a pro cycling team, but so should Vino, and on and on. Yet as ever cycling is a special case, even compared to professional soccer. Could you ever imagine a career doper that had been caught becoming manager of Manchester United or the LA Galaxy?

Which, in speaking of cycling being a special case, brings me to the UCI and Brian Cookson and their mutual fondness for investigations (into themselves that are run by themselves, naturally), and tip-offs about mechanical doping. Let’s start with the claims on Stade 2 TV’s program that alleged that the UCI Technical Manager Mark Barfield had alerted the e-bike company Typhoon that a dubious engineer, Stefano Varjas, was at the Tour de France and that the police were wanting to question him.

A Typhoon can give you those extra Watts

Emails were printed, a big hullabaloo broke out, it looked dodgy as heck and had many a cycling fan facepalming, for want of a worse word, and feeling that this was just the same old UCI. How deeply cynical! Surely the UCI would recognize the deep concerns of the fan and word an appropriate response, right?

“The UCI has full confidence in its staff employed in this area,” reads the UCI’s statement. “It will investigate whether emails sent in 2015 to an external consultant were passed on to a third party and used in a way that no-one intended.”

So if I have full confidence that my dog did not eat next door’s Siamese kitten for breakfast and am going to investigate this case myself, what conclusion do you think I am likely to reach? 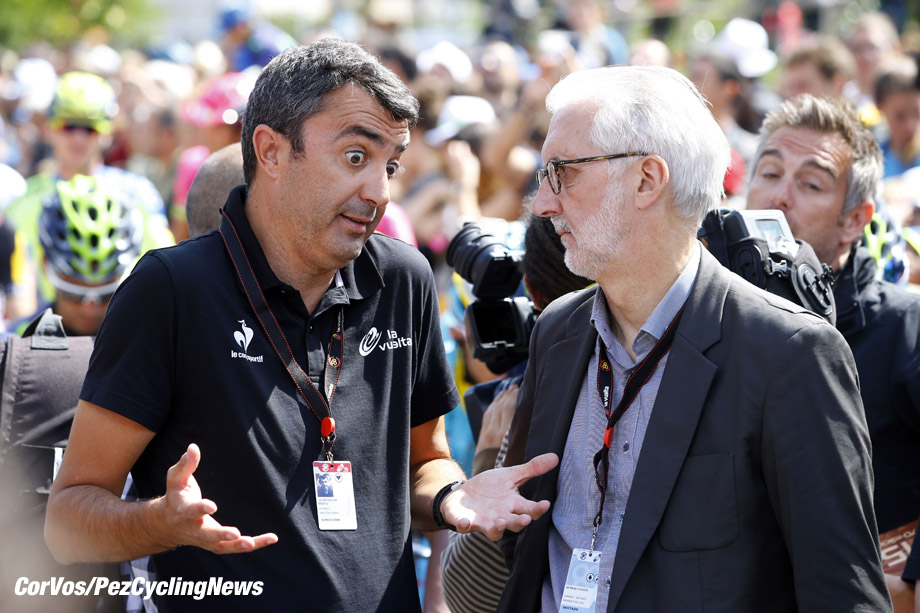 What can you do, Brian?

The UCI under Cookson has been a failure, in my opinion, and you need only look to the lack of action after CIRC, the ASO mess and the UCI’s association with Velon, Astana’s license issues, Tramadol still being legal, offering whole hearted support without caution to the Russian Cycling Federation, an increase in motorbikes that have led to riders being hit and the lack of any cohesive plan to tackle the growing problem of doping amongst amateurs to feel that all is indeed un-rosy in Cookson’s front yard.

If this allegations against Barfield are proven – and it looks pretty bad even if you give him the benefit of the doubt – then well, the UCI will probably have another UCI-run investigation. 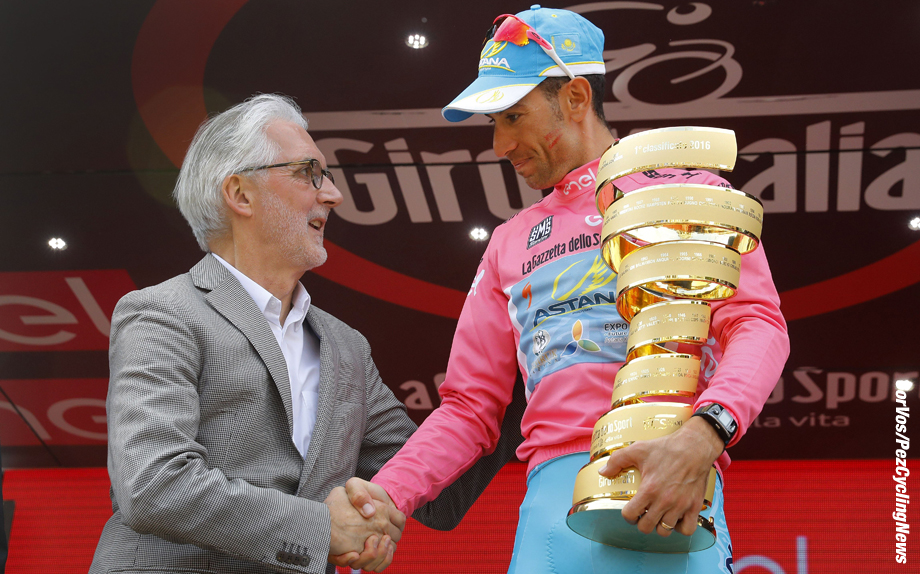