There can only be one subject for today’s Lowdown: The Hell that is Paris-Roubaix. Lee has a look at the winning philosophy of race winner John Degenkolb and his do-or-die approach to the cobbled Classic. Sagan and Wiggins also come under the microscope; good and bad, but the beauty of L’enfer du Nord is the winner.

He’d just about managed to fight off the tidal wave of emotion threatening to consume him after winning the biggest one-day race in the professional road cycling calendar and emulating his hero Sean Kelly, and then John Degenkolb said something that defined every second of the effort he’d just wrought from his body:

“I was not afraid to fail and that was the key.”

That’s some deepness right there. I knew the lad could sprint but I never knew he was a philosopher.

What he was talking about is something that marks the true champions from the also-rans, the seizing of the moment when the odds seemed stacked against you, the taking of the bull by the horns and controlling your own destiny.

Failure must be embraced if one is ever to scale the heights. It’s pivotal to success. 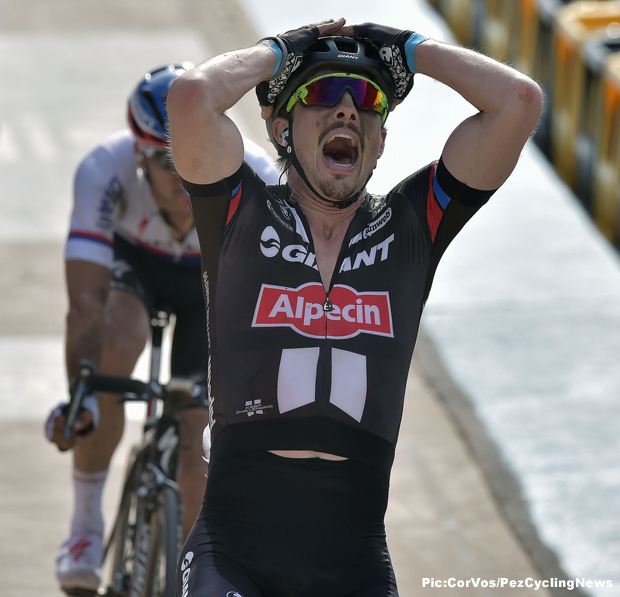 Degenkolb: Controlling his own destiny

In the modern era of cycling, of race radios and controlling trains, of meticulously – some would say robotically – prepared teams, to see a guy go all carpe diem was liberating. His surge from the chasers up to Greg Van Avermaet and Yves Lampaert was shocking – not that he got there, but that he went in the first place.

You could just tell that he knew he had it in him, knew that if anyone was to beat him they would have to pull out the ride of their lives. What impressed me even more was his desire to crack on even when Lampaert did his little head-shake over his shoulder, letting the German know he was not going to be contributing.

Did Degenkolb start playing games? No. He knew not only that he had the sprint to win but that he had the will too. Even when Stybar got back on he did not falter. The others weren’t just beaten by his natural abilities, they were beaten by the force of his will. Watch his last two pedal strokes before the line. What energy he put out in those as he propelled himself into the history books. It was a monumental effort, fit indeed for a Monument.

In claiming Milan-San Remo and Paris-Roubaix in the same season he emulates Sean Kelly, his childhood hero. Let’s hope that Degenkolb is riding clean, unlike Kelly, who tested positive for amphetamine after his victory here in 1984.

One rider who must still now be wishing that he was Degenkolb very hard indeed is Bradley Wiggins. I’m probably supposed to put ‘Sir’ in front of that but I’m neither a fan of the British monarchy nor the titles they dish out – nor, truth be admitted, of Le Wiggo. 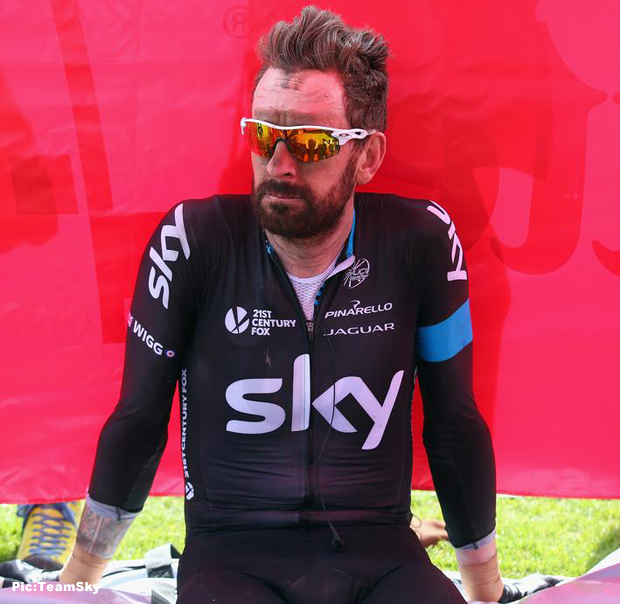 It wouldn’t be that bad if his mealy-mouthed miserableness was designed to do something, like aimed at dopers or something else constructive, but it’s all seems to be just about him, really.

The hype surrounding his ride this weekend was wholly unjustified. Coming in 9th last year in an insipid edition was neither here nor there. This year, even the organizers went with him as the star of the show with him appearing in their advertising.

Bit odd that as the Euros don’t really rate him, something you can see form hanging about the car park waiting for the riders to emerge from their coaches pre-race. Thousands waiting for Boonen, Fabian and Sagan, whereas the Sky bus gets about 12 middle-aged English guys wearing Rapha, Paul Smith and Fred Perry (yes all at once), looking very much like Paul Weller’s backing band. 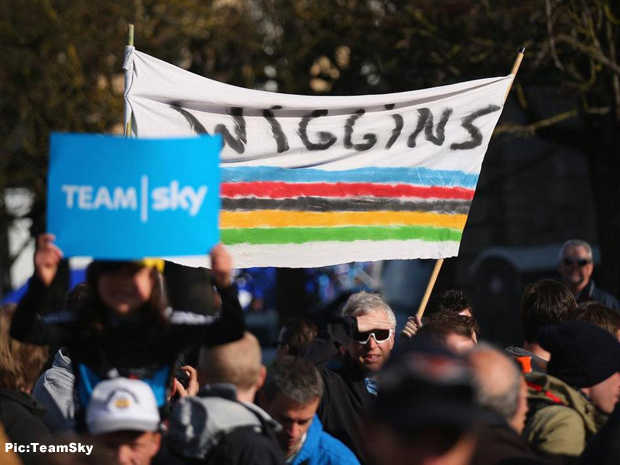 What will the Wiggins fans do now?

I find the English press’ fixation on Sky and in particular Wiggo to be a little disturbing. It’s not unusual that they should be interested in the successes of a homegrown team, rather it’s the subjective tone that creeps into the reporting that troubles me. It’s very much an ‘Our Boys’ kind of thing – something that we’ve seen before, with Lance and the American media.

Sometimes familiarity can be a dangerous thing. In the case of Paris-Roubaix though, it just led to the word ‘Wiggins’ being said about 30 times per minute, which didn’t leave much room for anything else. On the Twitter threads about the race though, some clever scamp had replaced the Rapha tag #MerciWiggo to #MerdeWiggo – which is French, if you didn’t know… and does not mean Sea of Wiggo. 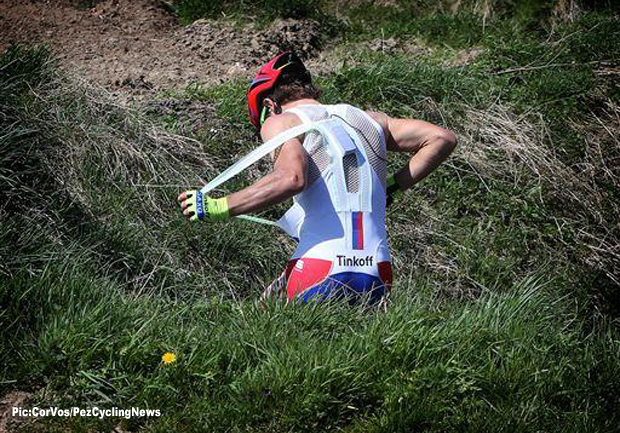 Speaking of merde, Peter Sagan put in a pretty decent ride seeing as early on he’d had to duck in the bushes to ‘do a Lemond’, as they say. No wonder no one followed him when he put in an attack.

One rider that disappointed was Katusha’s Kristoff, who looked a bit dog-eared on the cobbles. He may have been doing that to embarrass me, as I wrote on Friday that he was the favorite to fill all top three places in Roubaix.

It could be that he’s just that bit too heavy for the cobbles yet, but I think the main reason was that he won last week. Motivation is a crucial thing to a bike rider, and you have to wonder if he just lost that little edge that would otherwise have seen him dealing better with the body blows this infamous race can deliver.

It was a beautiful edition, this one, with the action really well captured by the cameras. One shot from above caught my eye, with riders popping up and off over the kerb onto the pathways and back, seamlessly slotting it. A peloton brings this wonderful moving poetry to a road, a symphony of freewheels and chatter, of color and energy.

It’s a shame so many still are juiced up, otherwise it would be perfection. One man got pretty damn close. 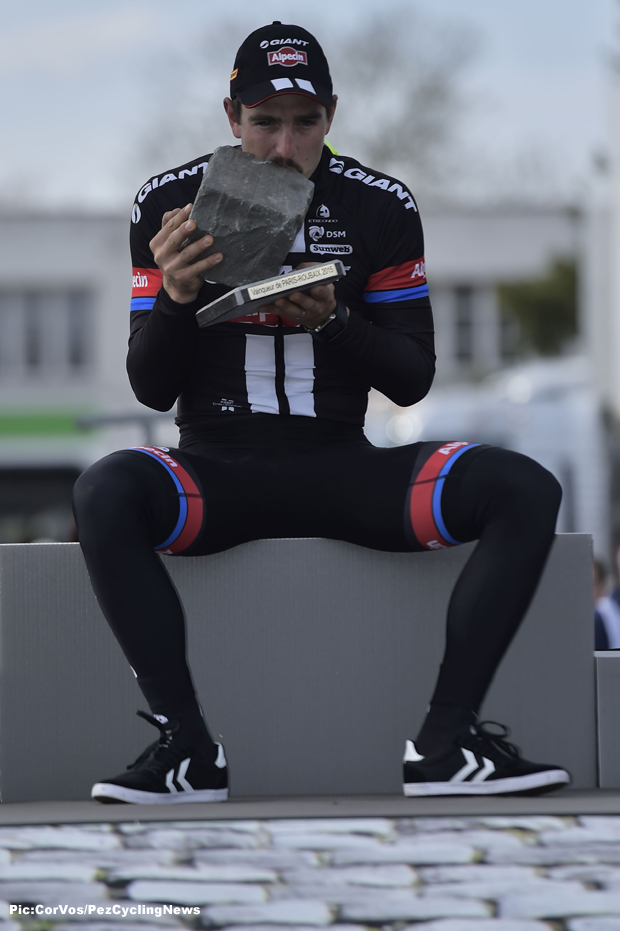