In the middle of his busiest time of the year, Lee Rodgers still managed to send in his Lowdown from the Taiwan KOM Challenge. But it’s not all plain sailing, a landslide is one of those problems even Lee just couldn’t plan for.

We were almost home. Just 120 kilometers away from delivering 14 of the world’s leading cycling journalists, a triple Haute Route winner and a soon-to-be Pro Tour rider and Vuelta a España KOM winner to the ‘finish line’, the final awards ceremony of the Taiwan KOM Challenge 2015 in Taipei. Taiwan Cyclist Federation officials, government ministers and a throng of cycling fans were waiting for us. And then, on the one and only road from the city that hosts the start of the race back to the capital, strung out perilously like a discarded black shoelace along the almost sheer cliffs, a road known locally as ‘The Highway of Death’, our convoy of vans ran into a huge landslide that blocked the entire road. 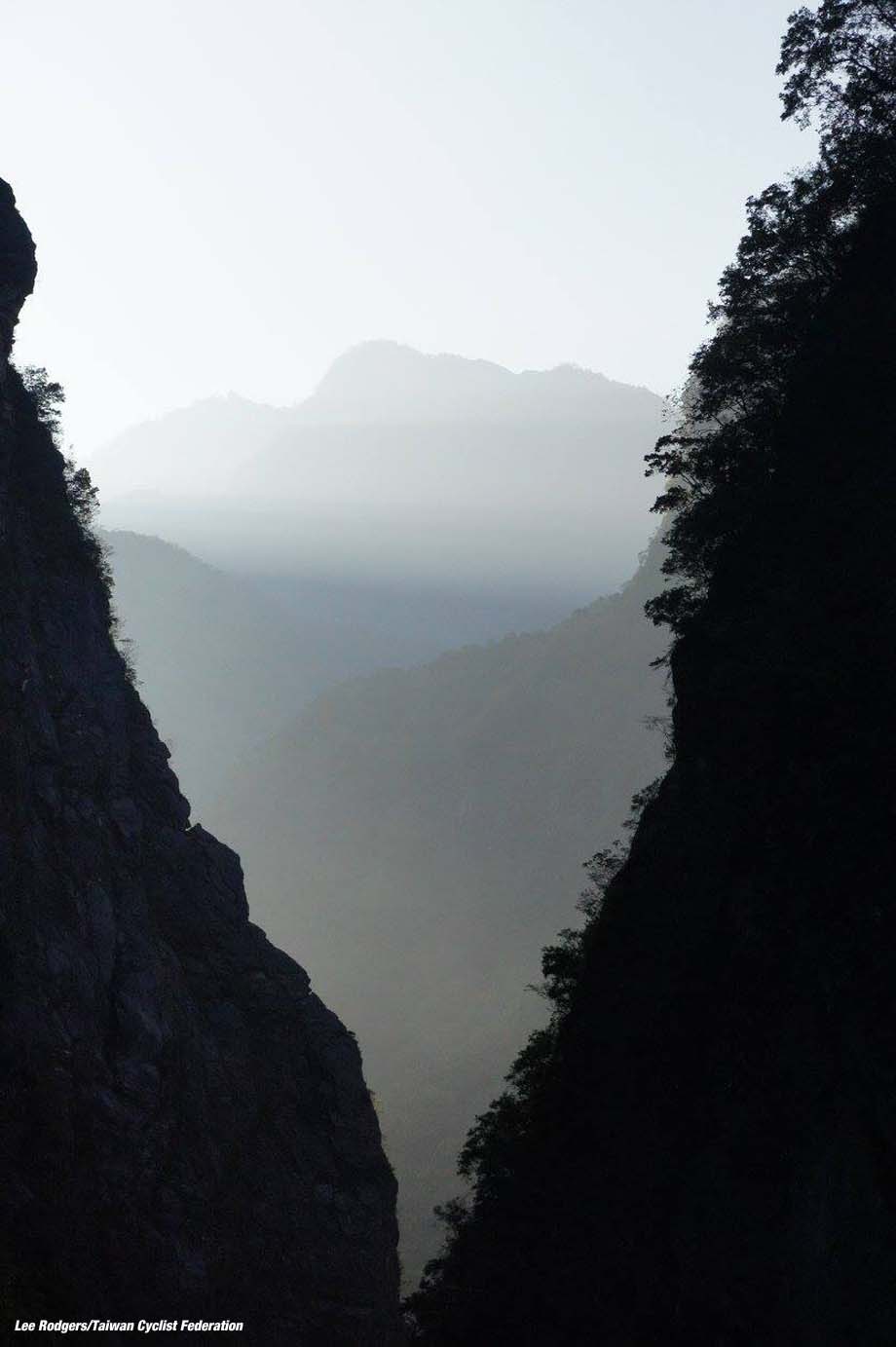 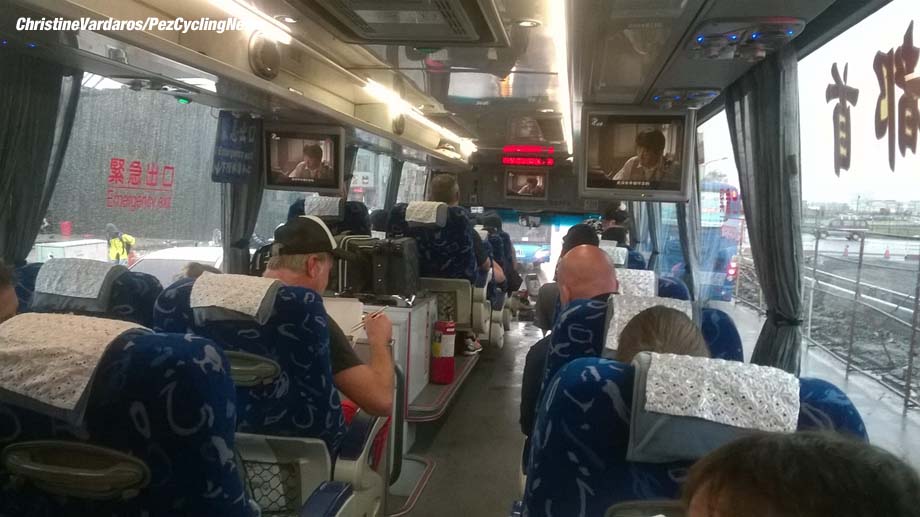 Despite blood pressure levels rising almost as high as the KOM mountain course, which goes from 0m to 3,275 (actually it’s 3,500m of total elevation) and a spike in adrenalin levels that would probably have seen me busted for doping had I been tested at that very moment, I did my best impression of the Mona Lisa and smiled what might have actually looked more like a twitchy grimace as I reassured everyone that all would be fine. . . 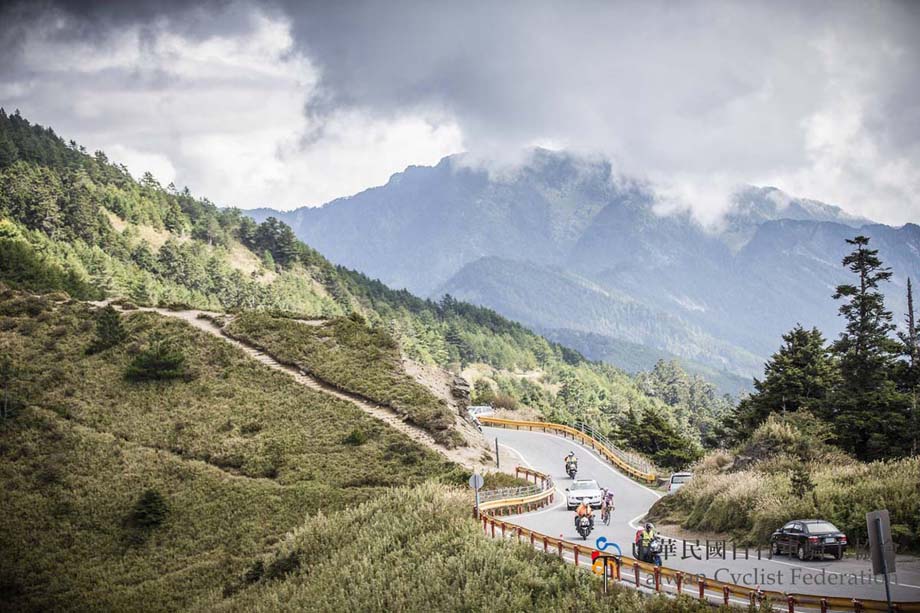 When I started working for the Taiwan KOM Challenge as the Communications Director, I didn’t quite know what I had let myself in for. My work starts around May, when the Taiwan Cyclist Federation (TCF) receives confirmation from the government office of the Taiwan Travel Bureau (TTB) of the budget for the race. Then it’s my job to draw up a list of potential journalists and riders to invite to Taiwan at the end of October, when the race is held.

I start with the major cycling outlets like PezCycling News, firing out emails to the editors and owners of the publications or to the journalists I know, then look to cover the social media side by contacting ‘guerrilla journos’, those who don’t work for an outlet per se but who have a large following on Twitter and so on. This year for example, we had Valenti Sanjuan, a Barcelona native who has 150,000 followers on Facebook and 101,000 on Twitter, with over half a million combined on all social media. 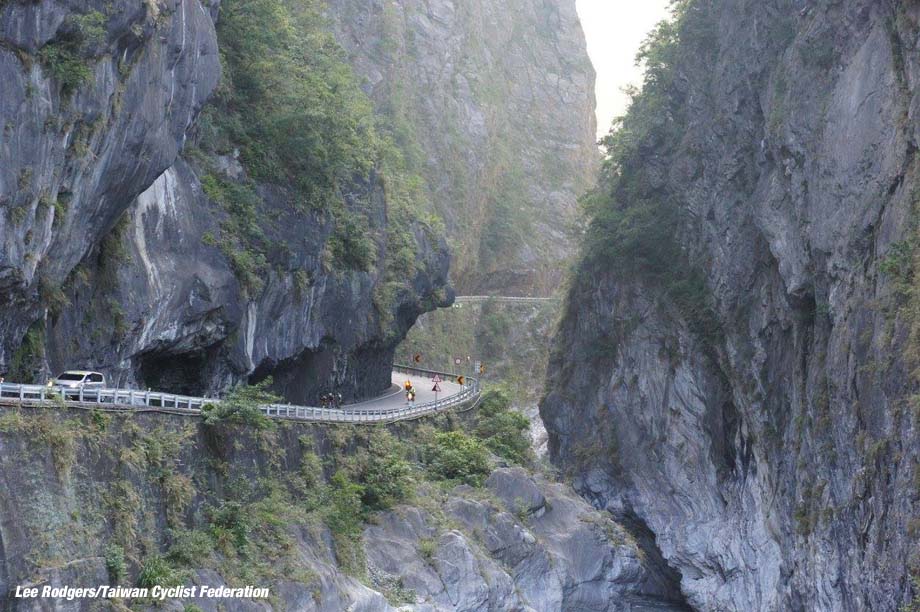 Then we come to the riders. With most of the budget going on journalists, as the aim of the TTB is to garner media attention around the world and to encourage more people to come to this beautiful island, I then seek out good climbers who can either animate or outright win the race who are willing to pay their airfare, with us covering their accommodation and transport whilst in Taiwan.

I went over to my Taiwanese co-worker, professional tour guide Bayaung Gao, to see what we could do.

“The road is totally out?”

“Totally.” She looked a tad green.

“Impossible, it’s a 90 minute drive back to the city…”

I went back to the vans and asked everyone to stay on board. It’s hard enough to get 16 ‘normal’ people to stay in one spot, but 16 independent, headstrong and curious folk who also happen to be journalists? Herding cats would be a good analogy.

Tires screeched and, had we had them, sirens would have wailed. 5 minutes later we were dragging bags from vans and rushing to our transportation like Americans leaving Saigon on April 30th, 1975… 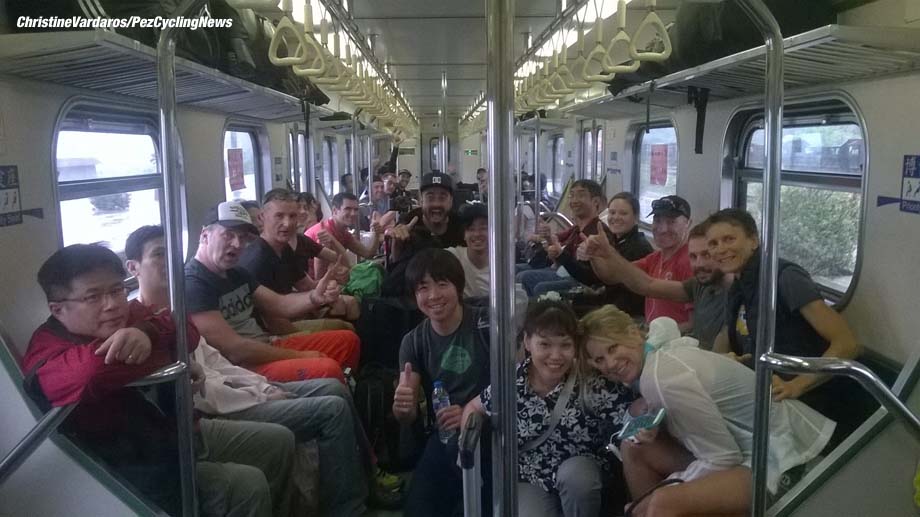 With a first prize of US$36,000 for the men’s event, going down by 50% all the way to 6th, there are always enough people interested in accepting the invitation of accommodation and transport. I then check each rider’s background and indeed do the same for every participant in the race (we had over 220 Taiwanese and 200 foreign participants at the race last weekend) to see if they have ever been suspended for doping. The KOM Challenge invoked a zero-tolerance policy toward doping last year: any rider who has ever been busted is denied entry.

This is a policy that is not unique, with both Gran Fondo New York and the Breck-Epic race having the same (Mike McCormack told me in fact that his race followed our lead in adopting this, I am proud to say), but, it is the first of its kind in Asia and garners us a lot of positive reaction.

I also have the more difficult task of finding a top Grand Tour rider – and always preferably a KOM classification winner – to the race. This is where things get tricky, and of course, this is a pretty important part of my job. Looking around at the 2015 Grand Tour KOM winners of the Giro and the Tour, I knew they’d be hard to contact, never mind to get them to agree to a full invite to the race, despite flights being thrown in and an appearance fee. October 30th just isn’t an attractive race date for the top guys, who generally down tools a month earlier.

Plus – Taiwan? That’s China right? Erm, well no, actually it ain’t. What it is, is unfeasibly amazing to ride here, with great food, intriguing night markets and a hospitable bunch of locals that will leave you feeling that maybe people aren’t so bad after all. 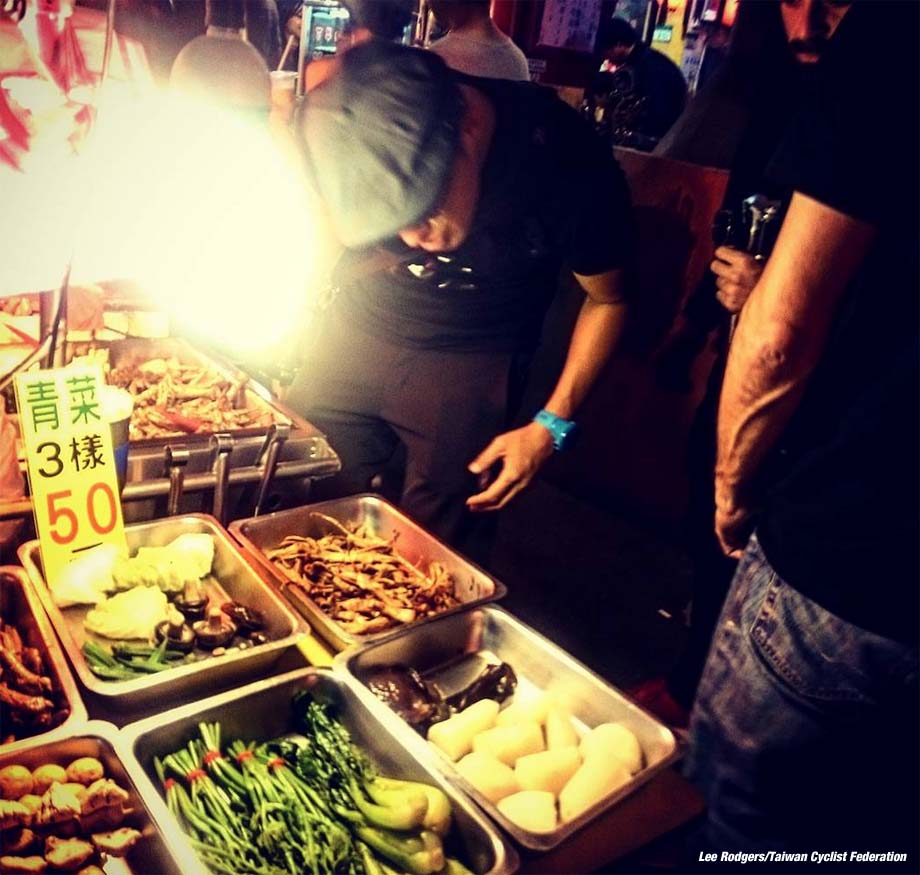 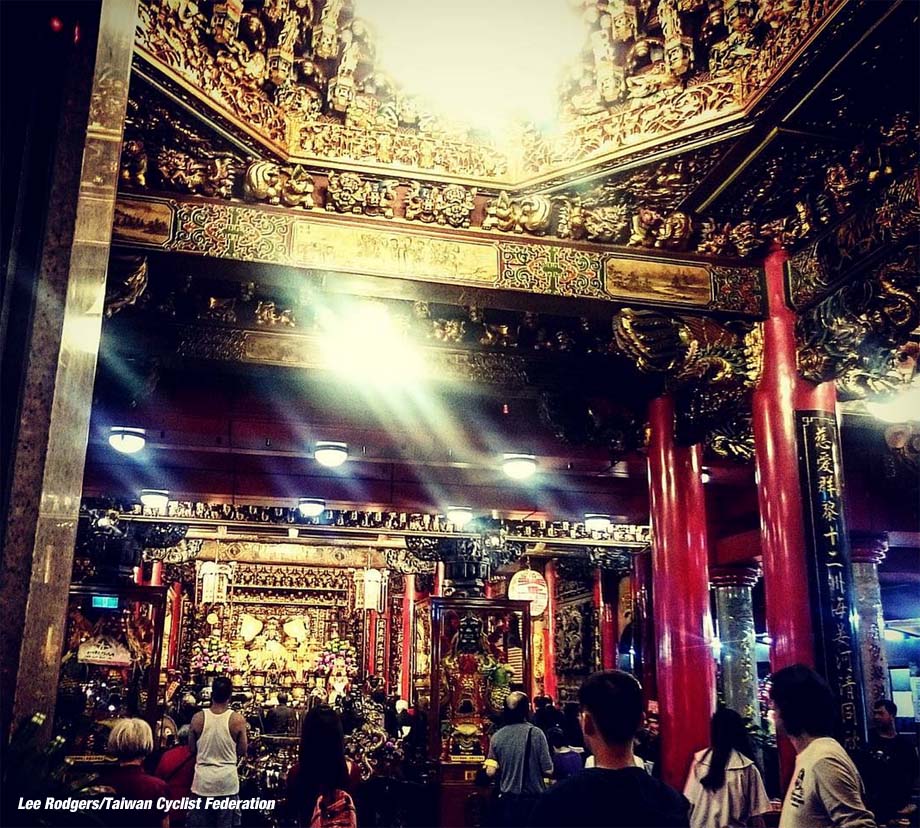 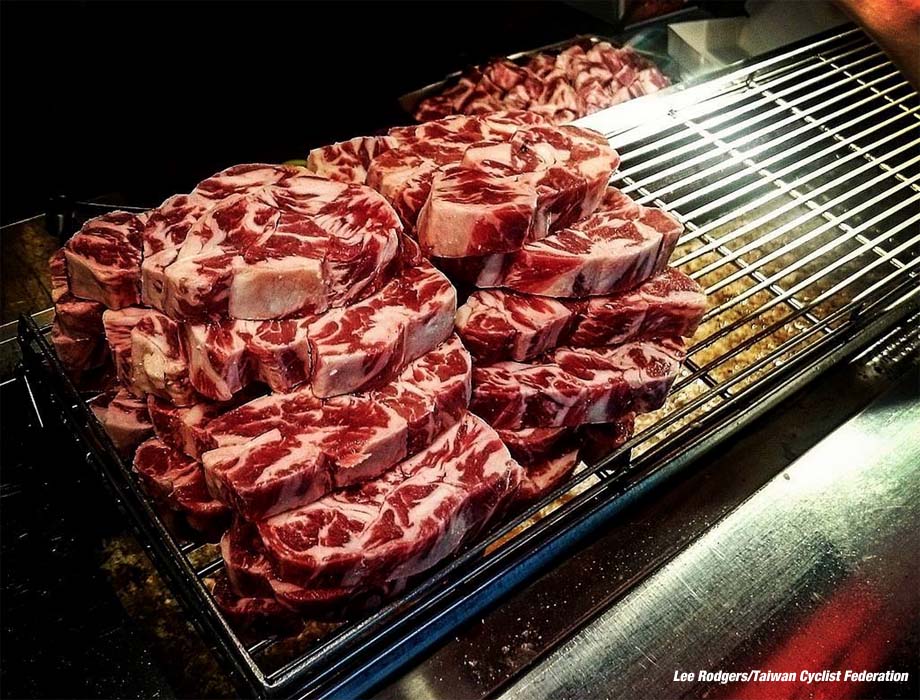 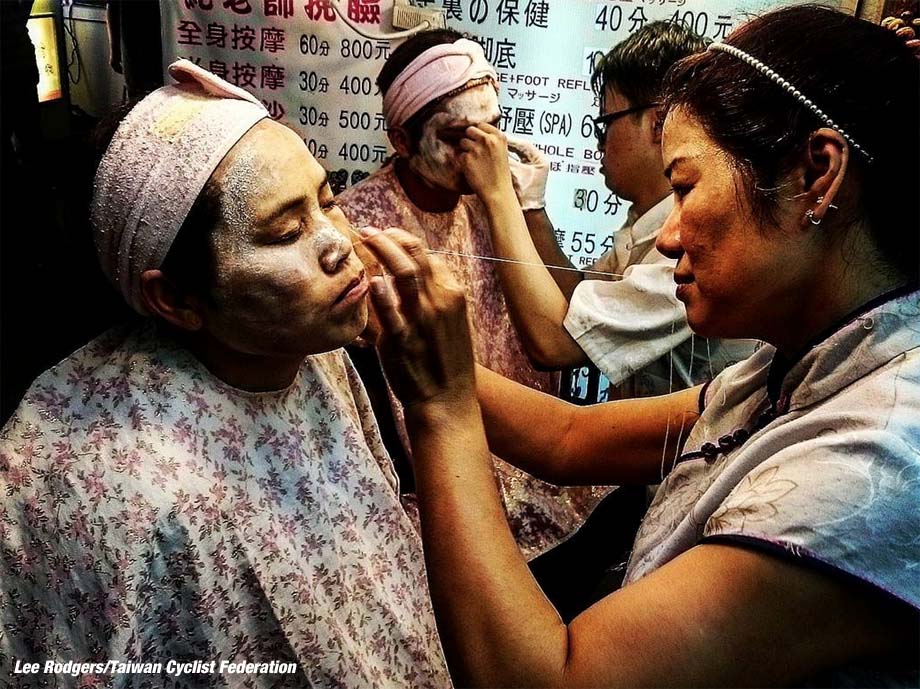 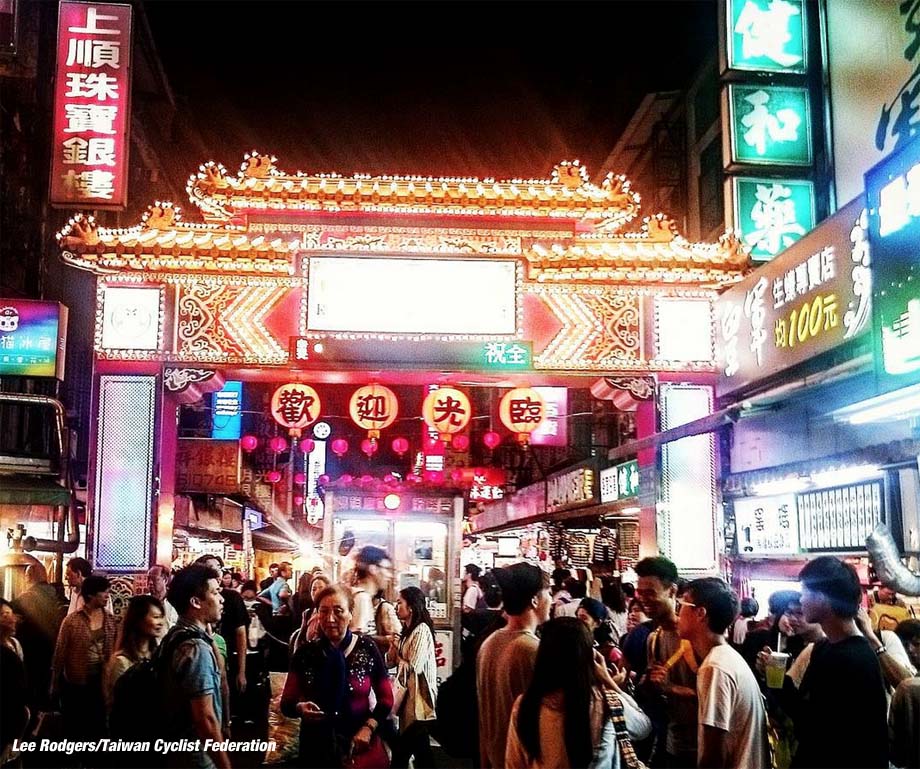 Then suddenly, it all fell into place. Chatting online to Spanish rider Miguel Silvestra Iniesta about our recent adventures at the Mongolia Bike Challenge, I mentioned the KOM and the need for a KOM winner, and he mentioned Omar Fraile, winner of the very recent Vuelta KOM classification. An hour later I was chatting to Omar, and within another 5 minutes he had accepted.

Omar turned out to be a perfect guy for our event. Friendly, easy-going and quietly charming, he was so down to earth that you would never imagine he had just won his first jersey in his first ever Grand Tour. He smiled for endless photos, signed hundreds of posters and attended all four of our press conferences (yep, you read right!), with a serenity that I secretly envied… 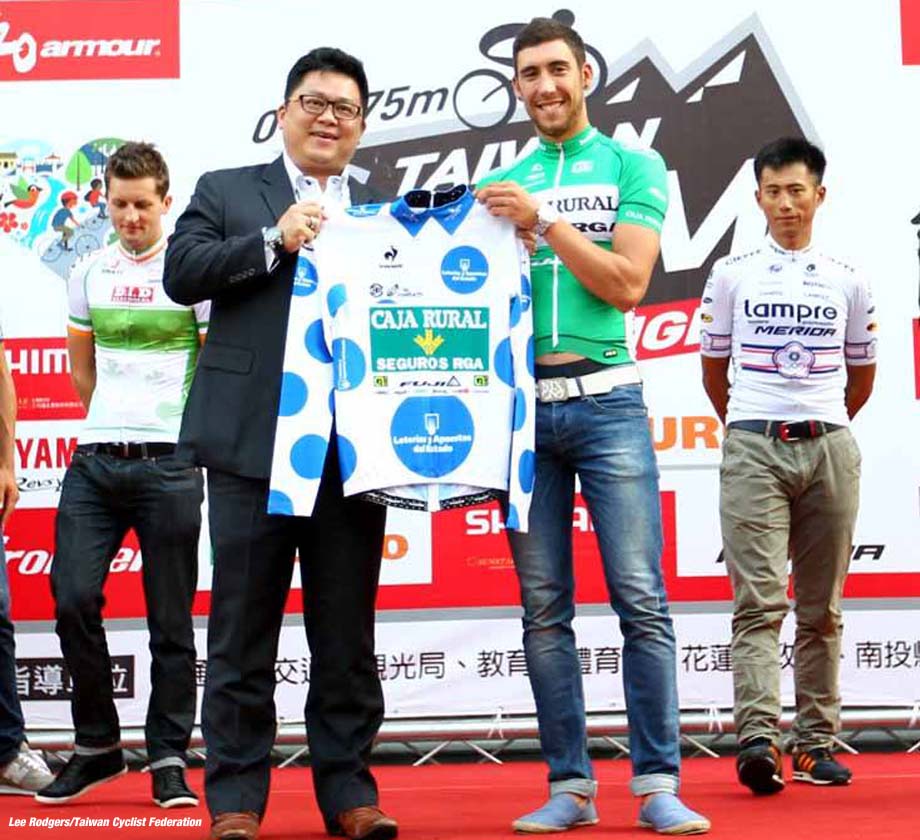 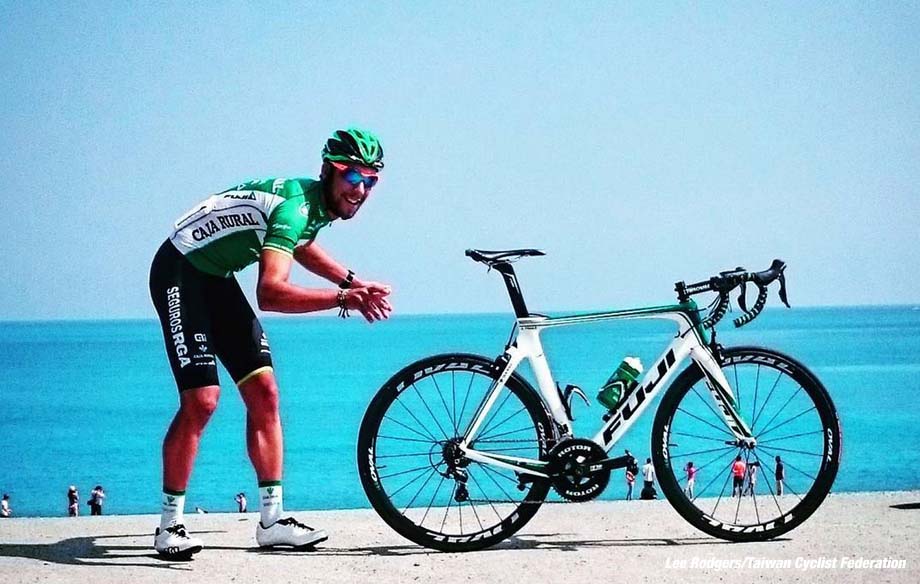 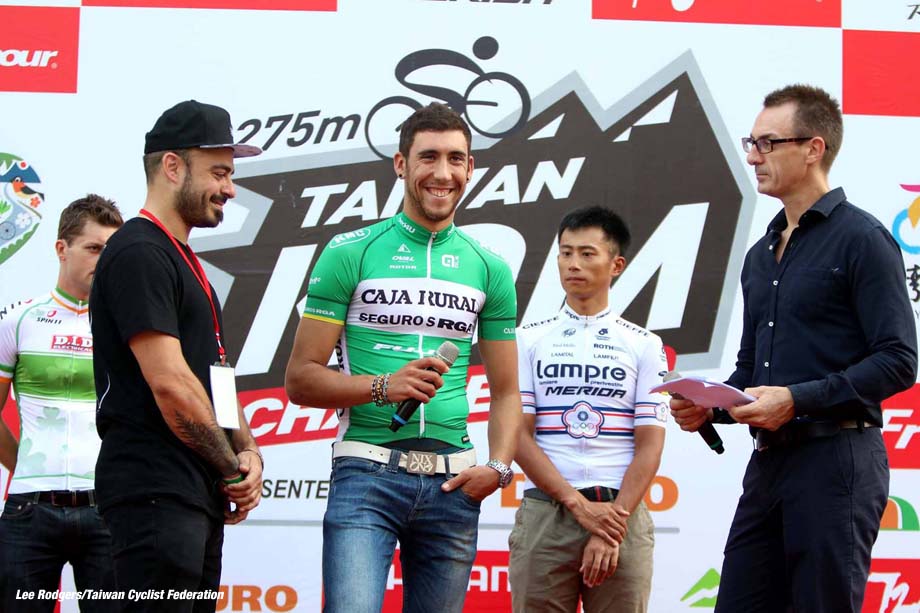 Onto the train we barreled, a 40 minute journey that saw the local Taiwanese passengers somewhat taken aback by the large influx of foreigners, though I saw some secretly taking cellphone photos to show their friends later, then off at Yilan Station, were Bayaung somehow managed to get 16 take out meals cooked and delivered to us in just 10 minutes, onto the bus for an hour, where I was asked if I’d planned the landslide to show them more of Taiwan and whether we were going to get onto a speedboat next, and then off the bus and into taxis. Myself and Baying were the only two to know what was going on but everyone was by now having fun and very graciously helping us to get through this without another of us having a total meltdown. 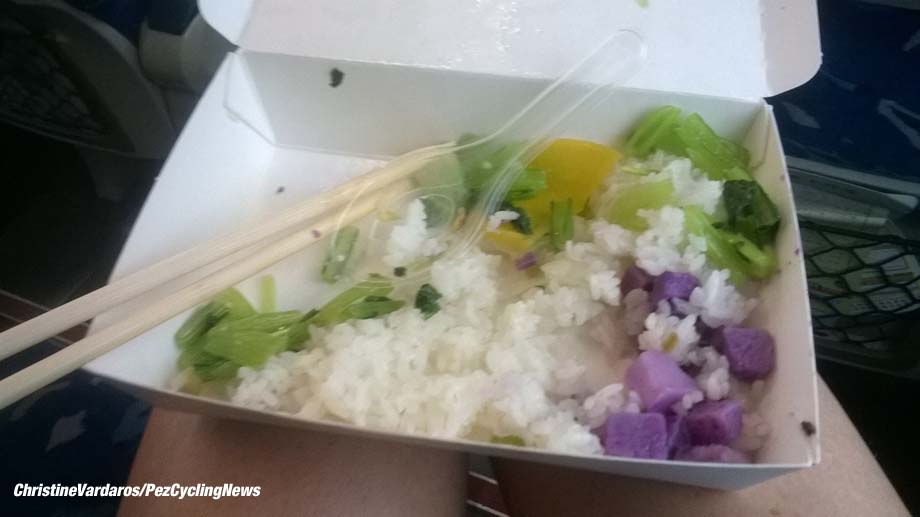 Then, finally, we arrived at the hotel with ten minutes to spare. All could finally relax, apart from myself, as I was asked to accept the winner’s trophy on behalf of Damien Monier, the winner of the event for the men (Eri Yonanime won the women’s). 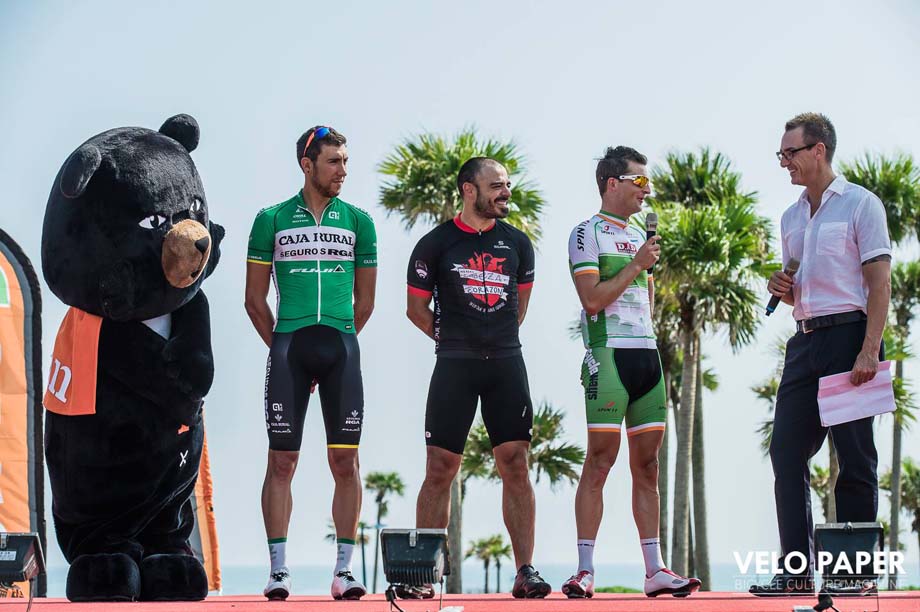 Standing there in shirt and trousers, the last thing I did was to want to either pretend like I’d won (I didn’t even race, being in the lead car all day) or to attempt to out a size S jersey over my 85kg frame. But guess what? They wanted me to do both. I’ve asked for all images of this to be destroyed so you’ll have to use your imagination. . .

And that was that. Another edition, the best yet, comes to an end. Fascinating for me to be on the ‘other side’ of it all, from rider to organizer, to see all the work that goes in to putting on a huge event like this.

I advise you, if you like 100km+ climbs, to get out here next year. This will become the world’s unofficial KOM championships very soon, and the route is second to none. 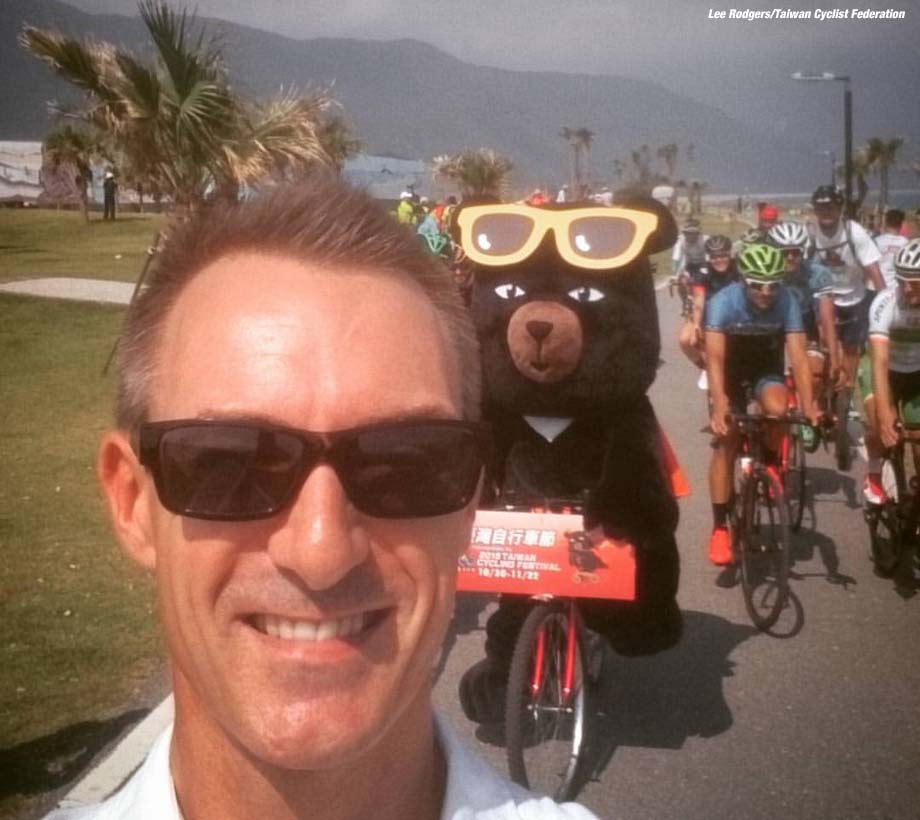 OK I’m off to my meditation class.

CompuTrainer: The WINNER Is…