It strikes me as peculiar how such a disarmingly simple machine can be the fulcrum for such complex issues, of compelling tales that stir the deepest emotions and of such resounding devotion, yet this is what the humble bicycle is.

Essentially it is little more than a bunch of tubes, a handful of components and two wheels – a design that, even despite the introduction of new materials through the generations, has changed little. Yet if ever a machine was greater than the sum of its parts, this is it.

It is our vehicle, our love and our promised land, all at once. It brings a smile and often a tear to the eye of the devotee, and not just through the pain we inflict upon ourselves whilst aboard. Who could argue with the romance, the elegance, the beauty of a bicycle? This is something that the early advertisers clearly understood, for this heady combination is mastered in many of the classic adverts from what truly was the honeyed age of cycling.

It’s rather easy from our viewpoint in 2015 to see the old advertisements as somewhat quaint and antiquated, but the importance of the bicycle back in those days in social and economic terms was reflected in the fact that by 1898, as much as ten percent of all advertising in U.S. periodicals was by bicycle makers.

I’ve no idea what it is now (figures unavailable online) but you can be sure it isn’t 10%.

By 1890 the trend was truly taking off, with some 150,000 Americans owning bicycles. Bike sales rocketed in the same year as the number of bicycle owners doubled in just one year. By 1900, some 1.2 million bicycles were sold that year, a trend that was very soon to reverse with the advent of motorized transport.

One of the best known brands of the time was Victor Bicycles, made by the Overman Wheel Company, who produced three styles, a diamond frame bike, one version with a standard fork and another with a spring fork, and a woman’s version. 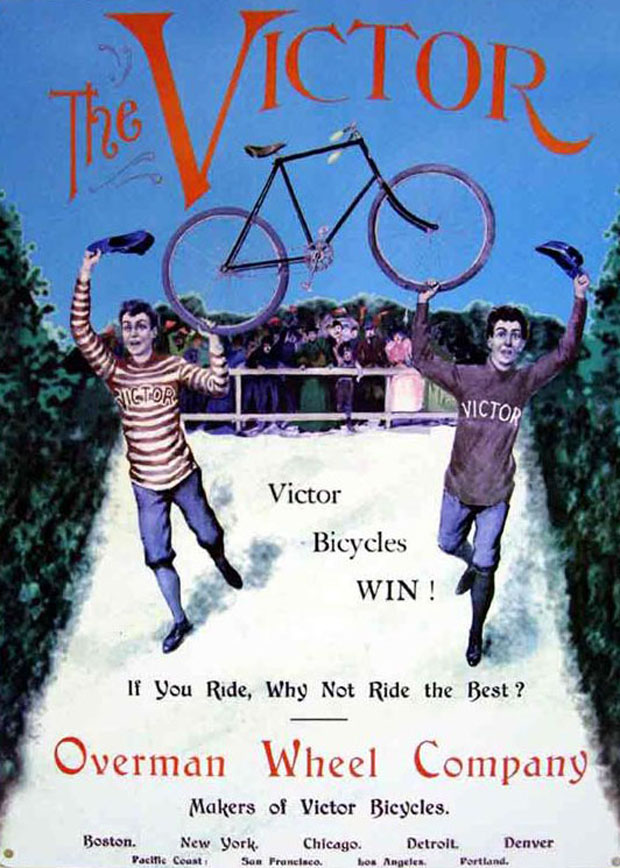 You can see from this image below that the Overman Wheel Company was aiming at the competitive cyclist as well as the man and woman about town.

However, it is from a stylistic point of view that Victor Bicycles were truly fascinating, being at the forefront of the dominant Art Nouveau trend that was the common thread through so much of the advertising of the period.

Here you can see that in the lettering and in the use of framing in another newspaper advert. 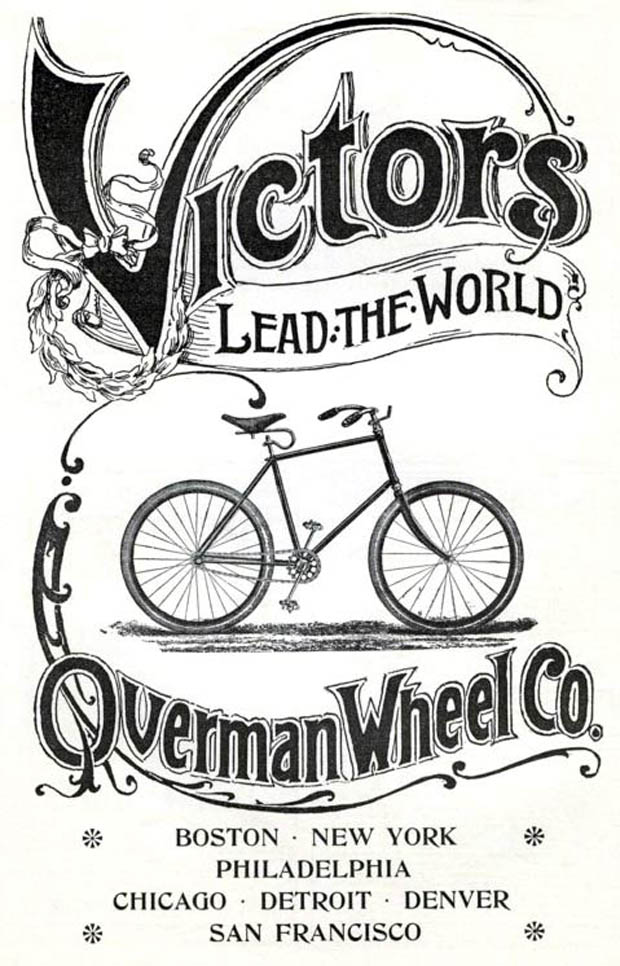 The 1899 catalogue for Victor Bicycles became known as a benchmark in the industry. Designed by Will H. Bradley, the document is credited as having a pivotal role in creating the American Art Nouveau movement. The Massachusetts Historical Society called the work “the most beautiful and elaborately designed of any in the bicycle industry,” and looking at the images below, it is not hard to see why. 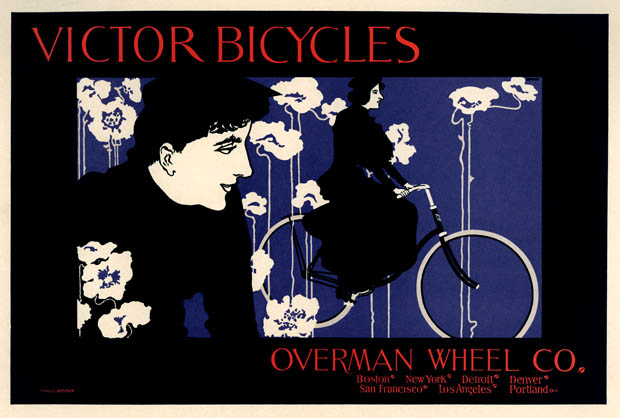 Other brands quickly dialed into the fashion, resulting in a mass of beautiful advertisements and posters, such as these below: 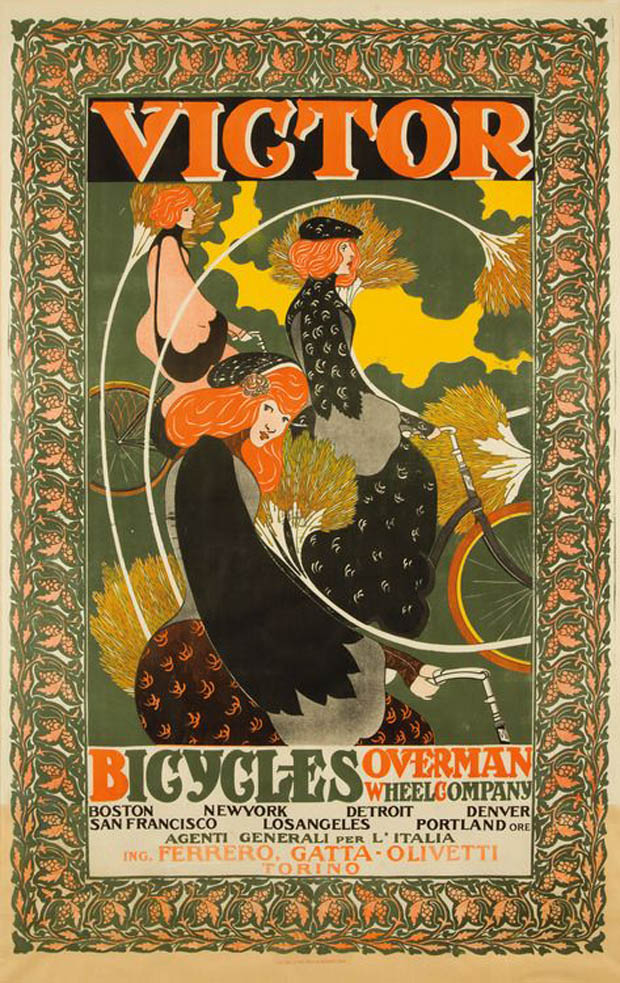 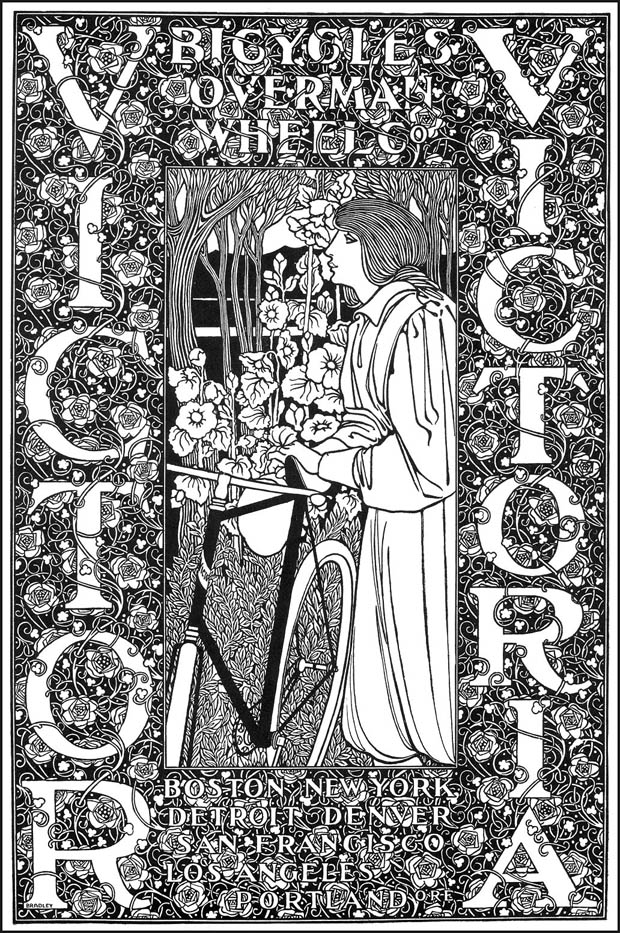 Like many aspects of life, advertising too at this time was in the midst of a revolution. With the advent of the mass-produced newspaper and magazine came something we are all too familiar with now – mass marketing. Everywhere were adverts for new products of all kinds, some that worked (like a bicycle) and some that were more than dubious (such as the endless lotions and potions being pedaled that claimed to cure all and any ailment). 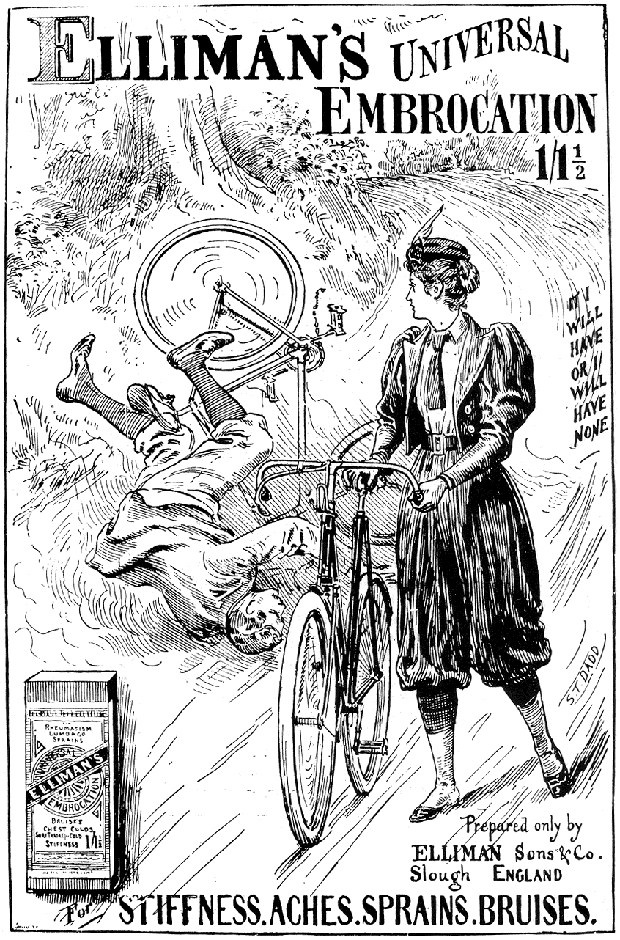 ‘Maybe this is one lotion that did the job?’

Another brand that was hugely popular at this time was Columbia Bicycles, a brand that is that still available today (Victor Bicycles folded at the turn of the 1900s). The brainchild of manufacturing entrepreneur Albert Augustus Pope, the advertising for Columbus Bicycles didn’t quite embrace the Art Nouveau trend as much as most other brands, going instead for a more traditional type of advertisement, one that used more text to explain the virtues of its creations rather than the dreaminess evident in the work of Bradley. 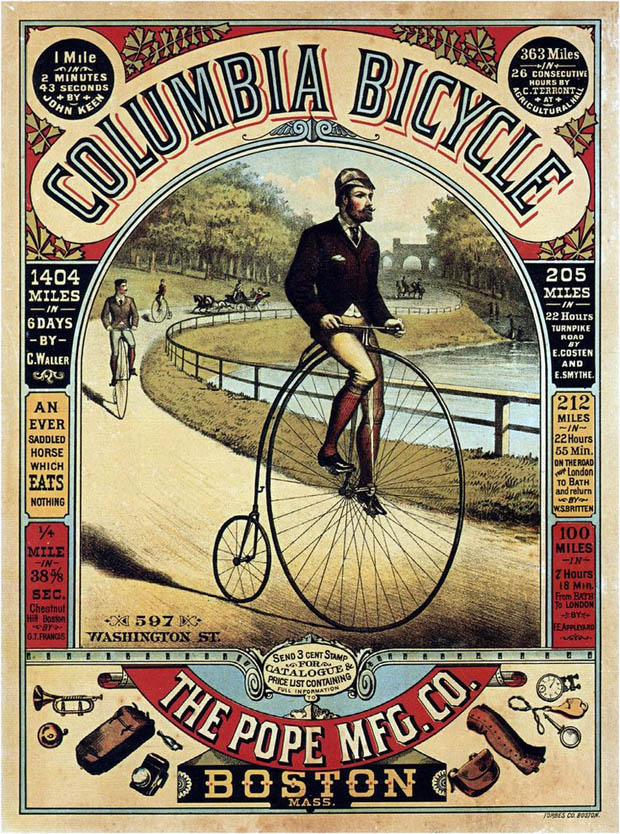 In this poster above, the achievements of riders aboard Columbia bikes are detailed, and there is a nod to the ‘competition’ that the bicycle faced, ie the horse, with the words “An ever saddled horse which eats nothing.”

This next poster, also from Columbia, continues this thread. 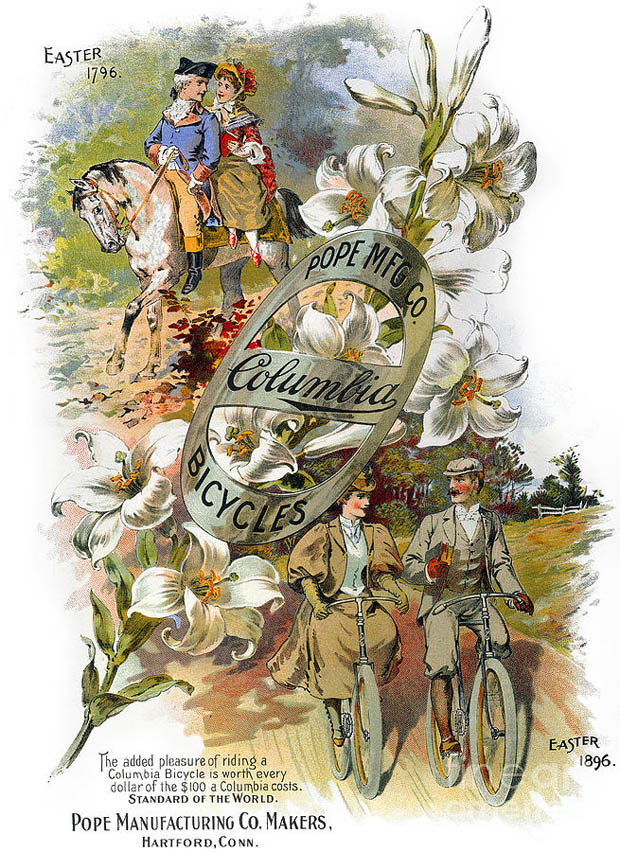 Columbia didn’t just stop at posters and magazine advertisements. They also made a host of trinkets that also carried the brand logo, from tie pins to spoons, ashtrays to cigar holders, perhaps the first ever bike brand ‘giveaway’ line.

The bicycle though is not simply a beautiful thing to look at nor a fun thing to ride, it is, as many of you will know, much more than that. Apart from being our meditation mat and our psychoanalyst’s sofa, it has also been the harbinger of social change and of enhanced freedom for the oppressed, as well as a vehicle of war.

You might have noticed just how much women dominate the early cycling poster and advertisements, and whilst it is true that Art Nouveau heavily featured the female form, the common presence of women in early bicycle advertising also reflects the importance of the machine to women’s emancipation and the fight for universal suffrage at the time.

In the 1890s, as the bicycle went from being a toy of the rich (funny how things come around again, eh!) to a machine whose popularity and usefulness spanned all socio-economic classes, just about one-third of consumers for bicycles were women.

One of the main protagonists in the Suffragette movement, Susan B. Anthony, is attributed in having singled out the bicycle for the role it played in liberating women.

“Let me tell you what I think of bicycling,” she said at the time. “I think it has done more to emancipate women than anything else in the world. I stand and rejoice every time I see a woman ride on a wheel. It gives women a feeling of freedom and self-reliance.” 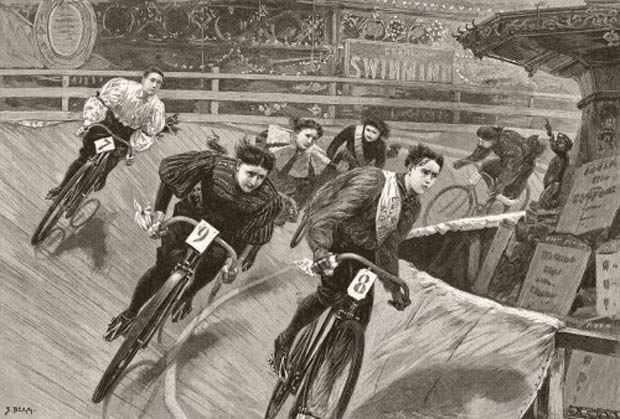 The humble bicycle is attributed even with having helped bring about an end to the frumpy, voluminous dresses popular until the late 1890s and in bringing ‘bloomer’ into fashion. The reason for this was that riding a bike in those massive swathes of material was all but impossible, hence the need for a new style of dress. 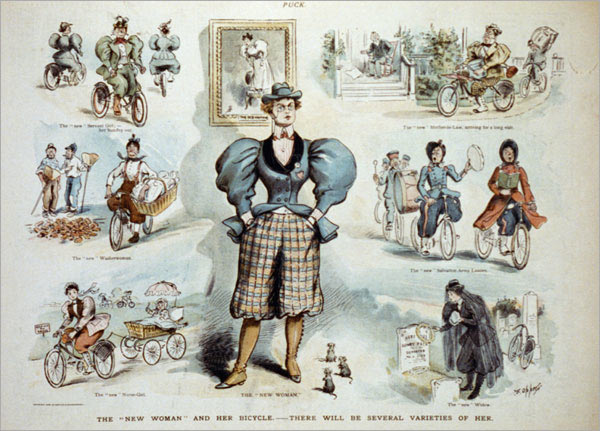 Frances Willard may have been mad enough to become leader of the Women’s Christian Temperance Union (bad idea there, Frances), but she did love her bike, noting with no little elegance that “…the bicycle would lead to more equitable gender relationships. We saw with satisfaction the great advantage in good fellowship and mutual understanding between men and women who take the road together, sharing its hardships and rejoicing in the poetry of motion.”

That sense of ‘poetry’ clearly imbued both the designs of bicycles and the advertisements of the age, leaving us all these years later with a beautiful collection of posters and images to linger over.