This week Lee Rodgers casts his eye over the opening classics of the season and looks into just what makes these great old races so special. Lee also runs into a special old rider who has been up and maybe too close to the ‘Campionissimo’ Fausto Coppi himself. Life on the cobbles!

‘How was Majorca, gentleman? Ah, sunny you say? Warm? How nice. And how about you fellas, how was Oman? Quite windy hmm? You don’t say? Well, strap in lads. ‘Cos here come the cobbles…’ 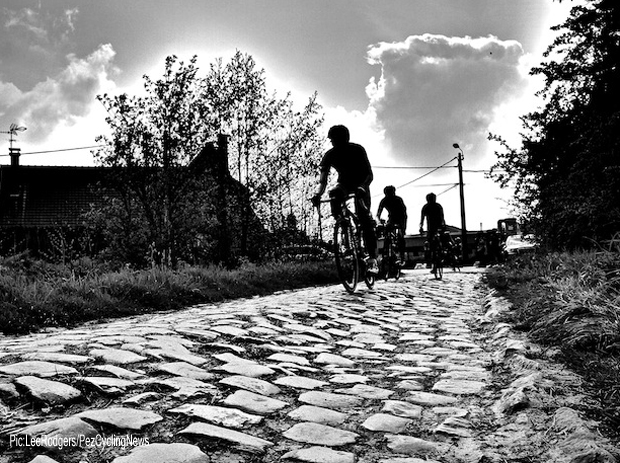 The folk Down Under are quite proud of their season opener, and the efforts to bring the world’s top riders to Oman, Qatar and more recently Dubai have been rewarded by media interest and advertising revenue aplenty, and there may have been Spanish throngs in Andalucía this past week but we all know, deep in our very beings, that the real racing starts here. In a place that’s never seen a kangaroo, a dust storm or a slab of Spanish beef.

No, this is Hard Man Country. Northern Europe. Belgium, Flanders, no less. The land that saw just about the worst of the fighting in two world wars, a region where the men are proper men and the women aren’t far off either, it’s also the homeland of cycling. If you’ve ever been to Flanders you’ll know it’s not an understatement to say that cycling is a religion there. I was there last year as part of a brilliant Velo Classic Tours and I never met a more knowledgeable bunch of cycling fans in one place before. 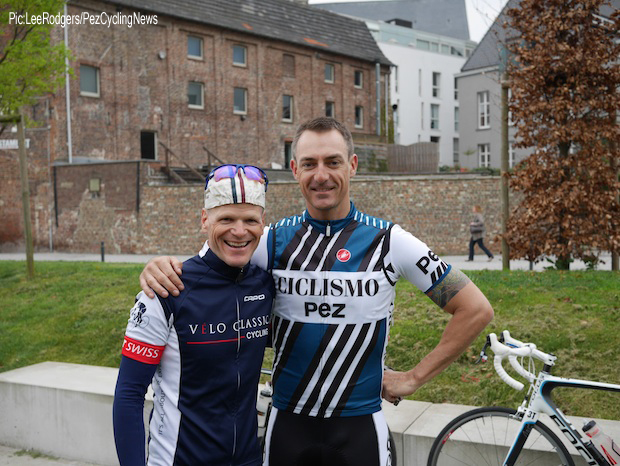 I met Etienne Hendrickx on the way to one of the cobblestoned bergs at the Tour of Flanders, he was standing by his car with two of his friends, all of them well into their 70s. He asked me where I was from and we got talking, and he told me that he’d been going to see almost every classic, Monument or not, that was held in Belgium since he could remember, year in, year out. Only the Second World War and his honeymoon had stopped him, he said. I almost missed the race flying by because Etienne was reeling off the best races he’d seen and the riders he like, some of whom he knew personally. 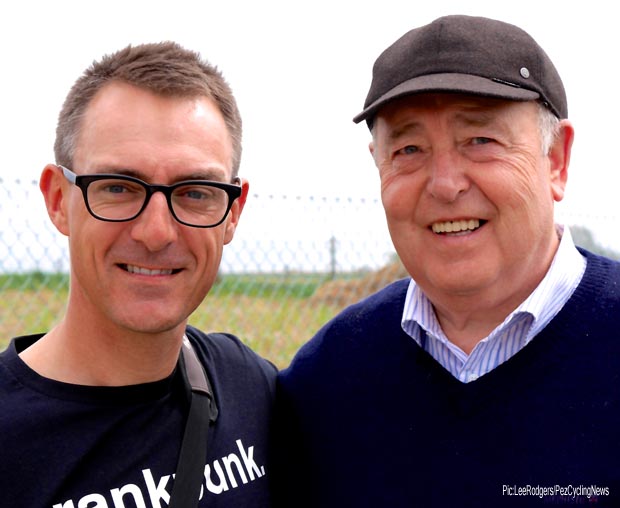 At another stop point, this time at Paris-Roubaix, I met Ronnie, a guy in his 40s who smelt of cherry pipe tobacco and was half lit on Rochefort 10, one of the finest (and strongest) of the Trappiste ales, who regaled me with a blow-by-blow account of how Tom Boonen had won his four titles at the Hell of the North. He singed my eyebrows with blasts of cherry smoke laced with the Rochefort’s tell-tale hints of caramel, molasses and vanilla as he grew more and more passionate about ol’ Tommeke, with his eyes welling up with nothing less than tears of love for the lad and the machine he’s powered to so many breathtaking wins. 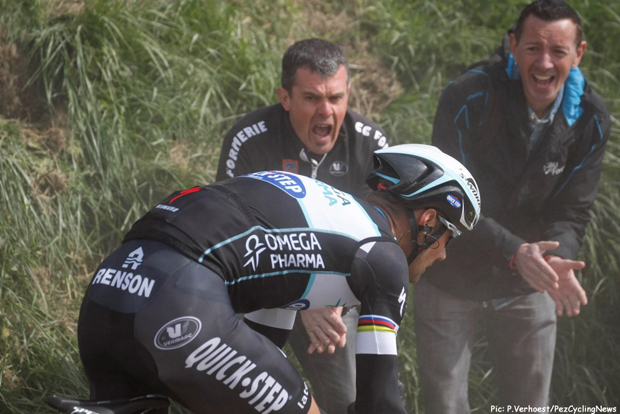 Tommeke on the Roubaix road

Another character I met was Trevor Smith, an old boy from London who was loitering by the toaster in our hotel on the day of Roubaix.

“Where you from then?” he asked me, peering over his jam-jar specs.

“Lancaster, but I live in Taiwan.”

“That’s a fair old distance innit? What you doin’ over ‘ere then?”

“Me too,” he says, getting all wistful. “I’ve been coming since 1986. I remember once I was out on the Friday and I rode behind Moser for a bit. Bloody animal he was… That reminds me of another time I was racing, and Fausto Coppi comes up behind me, so I get on ‘is wheel. Beautiful sunny day, birds chirpin’, glorious it was. Then I start feeling drops of water on me leg, and I’m looking up but there’s nothin’ in the sky but blazin’ sunshine. Then I realize: I’m being pissed on by the Campionissimo!”

“Haven’t washed me legs since!” 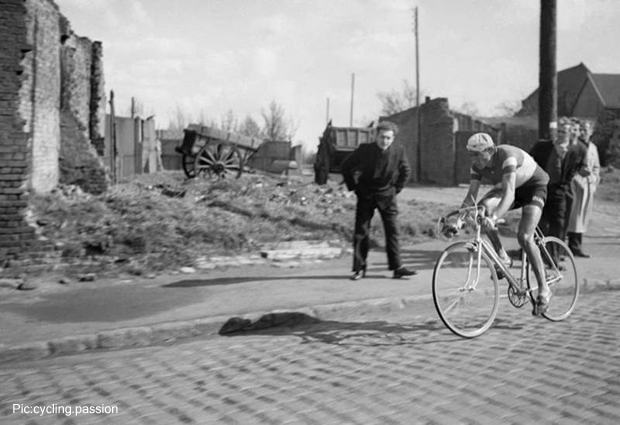 Fausto Coppi on his way to winning Roubaix in 1950

I swear, that dialogue is no word of a lie, and I’m still in touch with Trevor so if you want to check on that, let me know. The race in question was the 1959 Manx Premier Road Race, and sure enough, Fausto bloody Coppi was there – in the Isle of Man! (No offence to Mark Cavendish nor anyone else from the rock, but if you’ve ever been there you’ll know how incongruous the thought of Coppi being on the Isle of Man truly is). 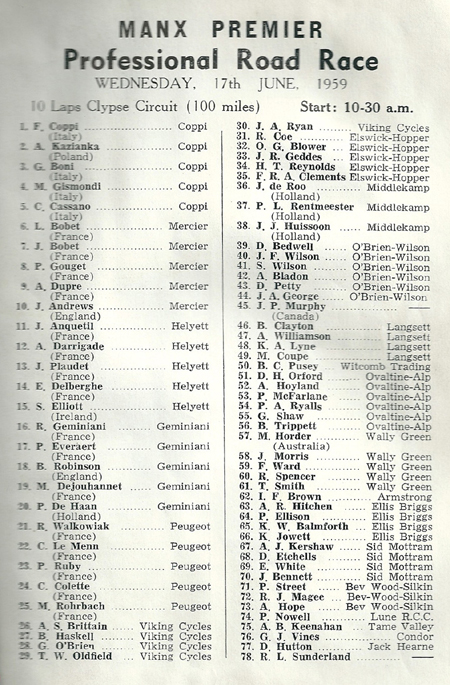 Trevor was there with his wife and two friends and their wives, and they’d been going to the race every year for almost three decades, standing in the same spot and cheering on twenty-seven years of Paris-Roubaix riders. 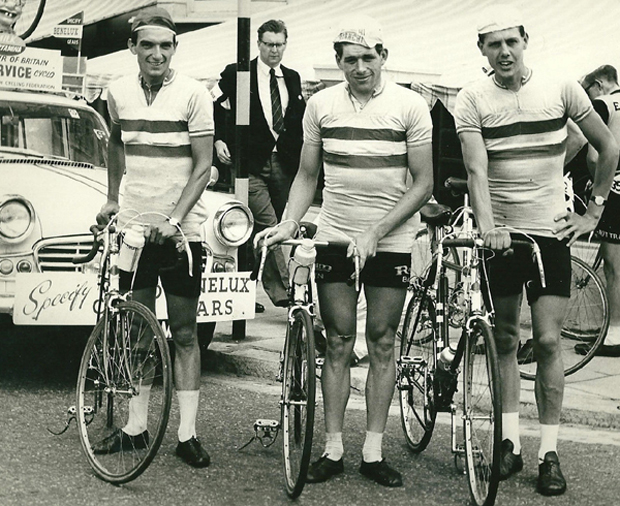 As we were talking, one of Trevor’s friends came over and said:

“Is he going on about Coppi again? Listen, why don’t you ask him who in this room won the British Championships at that time?”

The pair of them crumpled with laughter.

“Yeah!” the guys says through chuckles, “yeah it is!”

To this coming weekend, and we are to be presented with the twin delights of Omloop Het Nieuwsblad on the Saturday and Kuurne-Brussel-Kuurne on the Sunday.

To us native English speakers ‘Omloop’ actually means ‘circulation’ or ‘cycle’ (as in a clock cycle), but I much prefer the definition offered by a scamp on Twitter last year, that defined ‘Omloop’ as “a Dutch word meaning ‘Thank God there’s racing again.’”

The men’s race has been going since 1945, the women’s since 2006, and (namedrop alert) I am actually friends with a former winner, Tiffany Cromwell of Australia, who won in 2013. Tiffany won a whopping 450 euro that day. After sharing with her team she had just enough to buy herself a (un)Happy Meal. 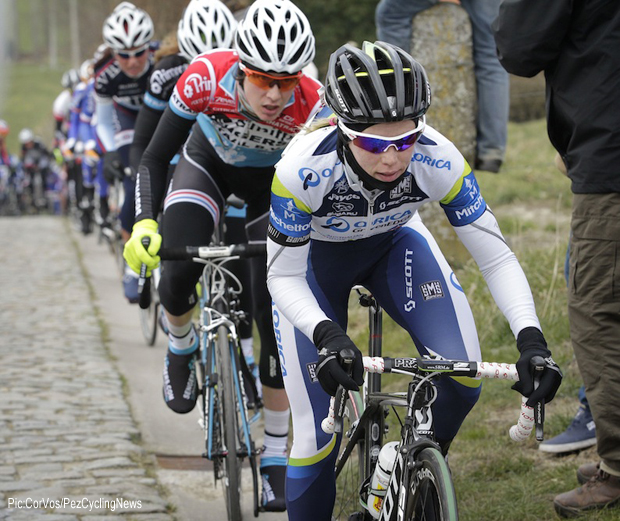 Kuurne-Brussel-Kuurne (KBK to the lazy, like me) also began in 1945, a symbol of renewal much like the Omloop was, of a nation determined to emerge intact after such a bitter war. KBK is less selective than the Omloop as the last hill comes over 50km from the line, but that doesn’t necessarily make it any easier. This time of year is one where not all the Euro pros are firing, but believe me, 90% of the Belgians and the Dutch are, and they take no prisoners.

Both feature the dreaded cobbles that can bring a rider down in an instant, as evident in the video from last year:

I rode the Flanders and Paris-Roubaix cobbles last year and all I can say is &*%$*&@@#^ *&%#[email protected]* and *&#%%@&!, [email protected]$**&#, to be honest. It was brutal, and I loved every second of it! You have to have no fear, that is the real key to riding these lumps of ancient stone fast – put the frontal lobe in the back pocket and get on with it, nothing else for it!

Intriguingly, no rider has ever won both Omloop Het Nieuwsblad and Kuurne-Brussel-Kuurne in one weekend. Will that change this year? We better watch and find out. 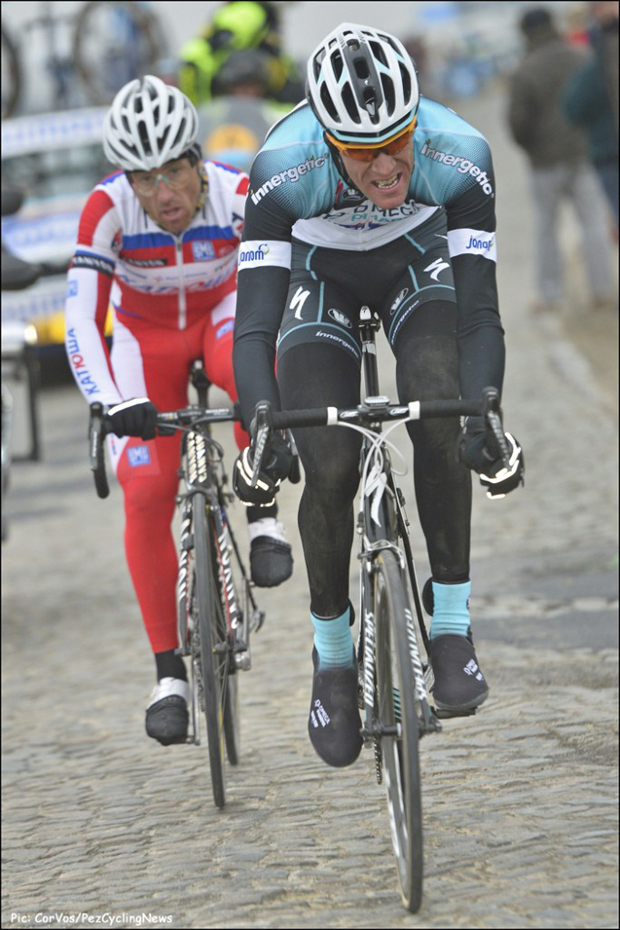 Stijn Vandenbergh and Luca Paolini, both a good bet for the week-end