When the Liberty Seguros team blew into Boston at the beginning of October, the MIT (Massachusetts Institute of Technology) wind tunnel was one of their stopping off points. We were lucky enough to sit in, and see a lot more to their testing than just hot air…

In this first of a three part series on Team Liberty Sequros, we explore some background on wind tunnel technology and how the team applied its benefits to their rider’s performances. Parts 2 and 3 include a closer look at the business of the team’s sponsorship (coming Monday), and an interview with their top sprinter Allan Davis next Thursday.

A TV film crew were on hand to record Luis Leуn Sanchez in action. Who wouldn’t want a home movie of their windtunnel test?

Everyone Knows It’s Windy
Most people probably think of wind tunnel technology as a fairly modern phenomenon. In actual fact the wind tunnel was invented in England in 1871 by Francis Wenham and John Browning who used it to study wing camber and aspect ratio. Major advances to wind tunnel technology were made in 1901 and 1902 by the Wright brothers in their work to develop the first flying plane. Most historians overlook this fact, but in Boston the MIT Wright Brothers Wind Tunnel pays homage to their pioneering efforts with wind tunnel development.

Ever wonder what a wind tunnel looks like – well there’s one right there, just left of the Wright Brothers sign.

The current MIT wind tunnel complex is the latest in a line of wind tunnels on the site. The first was built in 1896. It was replaced in 1914 (on the current site) and several versions have evolved since. At that time the “old MIT” was still in Boston. Building of the “new MIT” was started in 1916 and today the huge campus complex totally surrounds the wind tunnel building.

Okay, I’m sure I can figure out how to drive this thing if I can just remember where I put the keys…

In the cycling world Lance Armstrong is well known for exploiting training, technology, nutrition and many other facets in his drive to conquer the Tour de France. While he may have raised the application and awareness of many elements of the sport, he was certainly not the first in most fields. The benefits of wind tunnel technology were widely promoted a decade before Armstrong by Greg LeMond. Before, and since LeMond, numerous riders and teams have employed the wind tunnel in their quest for more speed.

For something designed by a bunch scientists, the control panel actually makes pretty good sense.

Over time Liberty Seguros has refined the performance of all of their star riders in the wind tunnel. On their recent trip to Boston Alberto Contador and Luis Leуn Sбnchez, two of their youngest riders (and potential team leaders for the future), were given the opportunity to spend time in MIT’s wind tunnel. Both riders are recognized for their climbing and time trialing prowess and have produced impressive results this year. Contador won the Setmana Catalana and Luis Leуn won the Jacobs Creek Tour Down Under.

Luis Leуn – nice round shoulders and flat back allow the air to more easily pass over him than into him.

In TT tests both Contador and Luis Leуn produce over 450 watts of power (the average club racer will produce 200 to 250 watts). In the wind tunnel the focus is on maximizing the efficiency of using that power. This is the math as provided by MIT researcher Mark Cote:

• 80% of all the power a cyclist outputs goes into overcoming air resistance (the other 20% goes into rolling resistance, accelerating the rider and bike, etc.).
• An athlete putting out 400W in a time trial will use approximately 320W to break down air resistance.
• Roughly 75-80% of aerodynamic drag is due to the rider and only 20-25% is due to the equipment (bike, wheels, helmet, etc.). Thus, rider position is very important.
• A small 5% improvement in aerodynamic positioning relates to a huge power ‘savings’ – 5% of the 80% of all power will be saved; so at 400W, 16W will be saved.

Liberty team boss Manolo Saiz watches every detail. To his disappointment, however, the MIT lab did not have MTV.

Over ten years or so a rider will gain experience and improve their position to gain between 5% and 10% aerodynamic improvement. At the MIT wind tunnel most of this improvement will be gained with about one hour of work! Test results are analyzed and riding positions are refined for comfort and biomechanical efficiency.

On the work with Alberto and Luis Leуn, Mark provided a few lab notes:

Technician Mark Cote battles tunnel-force winds to make an adjustment to Luis’ bike. All in the name of better aerodynamics.

1. Liberty Seguros Rider Positioning
The main thing we worked on with the riders was their hand/arm positions. In general, their backs were flat/slightly rounded which is ideal for time trial aerodynamics. Luis’ shoulders are fairly rounded and his chest is not catching a lot of air. This allows for the wind to go up and over the shoulders and down his back. His arms are still wide enough that he can breathe efficiently and his arms are blocking a lot of the wind that comes in contact with his upper legs. 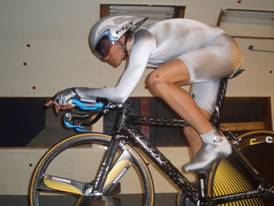 Contador works on cheating… the wind.

Alberto Contador had a solid position on the bike as well. From the side, you can see his arms and back are in a similar position to Luis Leуn. The current position of his arms in the aero bars allows for a very powerful position and it should be noted that most riders who ride in this position tend to slide back a bit and lever on the aero bars. 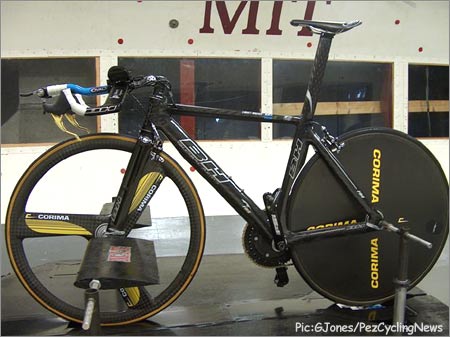 Try strapping yourself onto one of these BH tt rigs – I feel faster just looking at it.

2. Equipment
A common misconception about equipment is that of the order of aerodynamic importance for aero-gear. Most think that the frame matters the most, wheels next, and helmet last. Some even think that the components come before the helmet. In reality, a well designed aero-helmet will save you more time (power) than anything else. The drag difference between a vented road helmet and an aero-helmet is 2-4 times larger than the difference between a good aero-wheelset and a 32-spoked wheelset.

While Mark was working with the riders I was able to speak with Morgan Nicol of Oval Concepts Ltd. who had come to the wind tunnel to see his new Jetstream forks and Jetstream one piece aero bars in action on the Liberty Seguros team TT bikes. These beautiful products contribute significant aero advantage depending on the bike set-up and of course relative to Mark Cote’s comments above concerning ‘the order of aerodynamic importance for aero-gear’.

One minute you’re checking stats on your riders in the wind tunnel, next thing you’re part of “what’s cool in pro cycling”.

In modern elite races it is not uncommon to see winning margins measured in tenths of a second. Every possible refinement to position, equipment and training needs to be tested and improved upon. For racers at all levels wind tunnel work will introduce noticeable performance improvements. Priorities in position vs. equipment will be established specific to your own needs. An hour or so in the wind tunnel will replace years of trial and error.

About The MIT Wind TunnelThe MIT wind tunnel is available to professional and amateur athletes as well as equipment manufacturers. The facility is under the direction of Kim Blair, Ph.D., Center For Sports Innovation. Kim is an independent consultant and the Founding Director of the Massachusetts Institute of Technology Center for Sports Innovation (CSI), Dr. Blair leads the development of new products as well as technologies for sport performance analyses from early formulation of product concepts to final prototype design and testing.

When not on assignment for PEZ, Graham can be found publishing some very cool cycling content on his website: CyclingRevealed.com. Check ‘em out for more great cycling features.